At Play With Light, Water, Sound

One spring night in downtown Breckenridge, an elderly gentleman broke into spontaneous dance inside a cube of dangling spheres that emitted a tonal chorus of colored lights when touched. Up the way, a colony of inflated rabbits towered, and a cellist played on a tiny island in the Blue River, a flock of swallows soaring and diving on air currents swirling above the runoff as if choreographed.

But the wonders of Breckenridge’s innovative spring art festival, WAVE: Light + Water + Sound, didn’t end there. A bevy of decked-out bicycles passed in the fading light, powered by garrulous families, and an intersecting network of colorful, illuminated ropes enticed a young couple to walk a path made new by the marvel overhead. 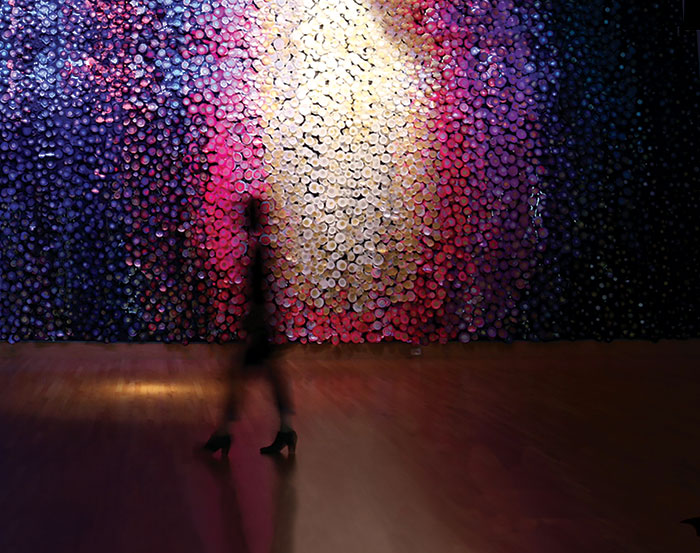 Tens of thousands of hand-painted Mylar disks reflect color and shadow in “Aura” by Julie Hughes, on exhibit at Breckenridge’s public Gallery@OMH during the WAVE Festival. [Photo courtesy Julie Hughes]

Launched in 2016 by the nonprofit organization BreckCreate, the WAVE festival reinvents the Breckenridge nightscape for four days each spring with spectacles of light, water and sound in the tradition of “light festivals” around the world. The artworks are curated around nature and ecology, and many are interactive, inviting community connections as guests play with them.

“WAVE was inspired by Canal Convergence, an immersive arts event that takes place each year along the waterfront in Scottsdale, Arizona,” says festival creator Robb Woulfe. “I liked the idea of bringing a similar experience to the mountains of Colorado, but one that addressed our ecological systems and native landscapes.” 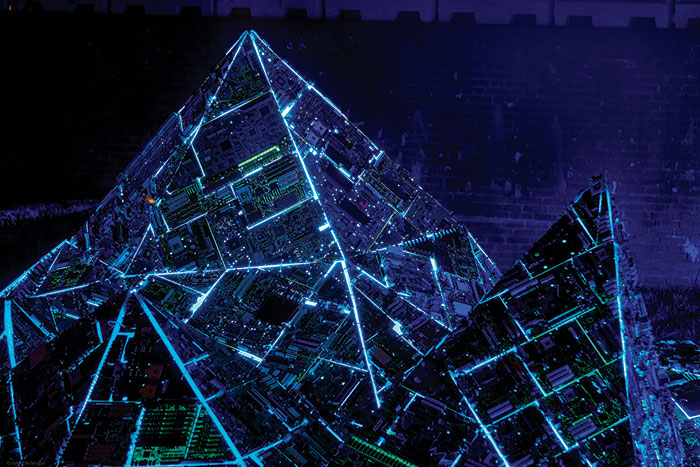 Taking place May 31-June 3, the 2018 festival will feature a solar-powered sculptural mountain hewn of discarded circuit boards by a Belgian artist; a playground of seesaws that light up and emit sounds when you play on them, created by a team of Canadian designers; and sets of ornate angel wings and halos, from a Jerusalem-based architect duo, that render all who pose within them angelic. An aerial ballet of winged “light kites” by a French artist collective will dance in the night sky, accompanied by a local wind quintet; and a water sculpture by a Denver-based programmer will flow and radiate in sync with music activated by guests at a nearby control station. Children can join local science teachers to make solar ovens and heat-sensitive color-changing slime; and a series of film shorts on light, sound and ecological topics will play nightly in the outdoor theater at the Breckenridge Arts District.

“WAVE is a perfect fit for Breckenridge,” says Woulfe. “Not only does it explore ecological topics important to residents and guests, but it embraces that risk-taking spirit that draws so many adventurers and lovers of the outdoors to our beautiful mountain community. By transforming our public places into canvases and exhibition spaces for fun, boundary-pushing contemporary art, the WAVE festival transforms all who take part.” 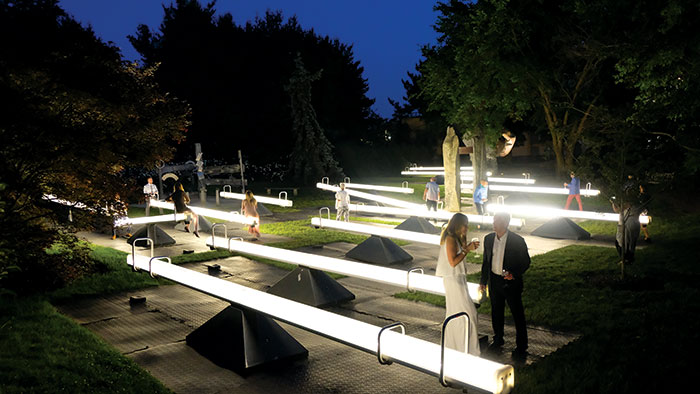 Families and friends are encouraged to climb aboard "IMPULSE," a set of interactive seesaws that illuminate and sing when you play on them. [Photo by Regis Proulx/courtesy Creos]

An admission-free festival with a host of outdoor attractions, WAVE: Light + Water + Sound takes place May 31 to June 3, 2018—right at the end of “mud season,” as the locals call it. This means discounted lodging, restaurant deals, light traffic, and a quiet, crowd-free town. Try VisitBreck or condo and house rentals or on-hill resorts like One Ski Hill Place; or stay in town at the new Residence Inn to be in walking distance of the festival.

Breckenridge is a 2-hour drive from the airport: Fly into Denver, rent a car and drive west on I-70 into the mountains, exiting onto CO-9 S in Frisco. Or, make it even easier on yourself by taking a shuttle from the airport, like Summit Express or Colorado Mountain Express. It’s a good idea to book in advance, as they often run reduced schedules in spring. Once in town, public transportation is free and easy through Breckenridge Free Ride. Head on foot or by bus to the Breckenridge Welcome Center for a guide to WAVE festival happenings, and pick up a spring Dining Passport (generally $10) while you’re there for restaurant deals at local favorites like Relish, Downstairs at Eric’s, Salt Creek Steakhouse, Giampietro Pasta and Pizzeria, and more.