At Home in an A-Frame 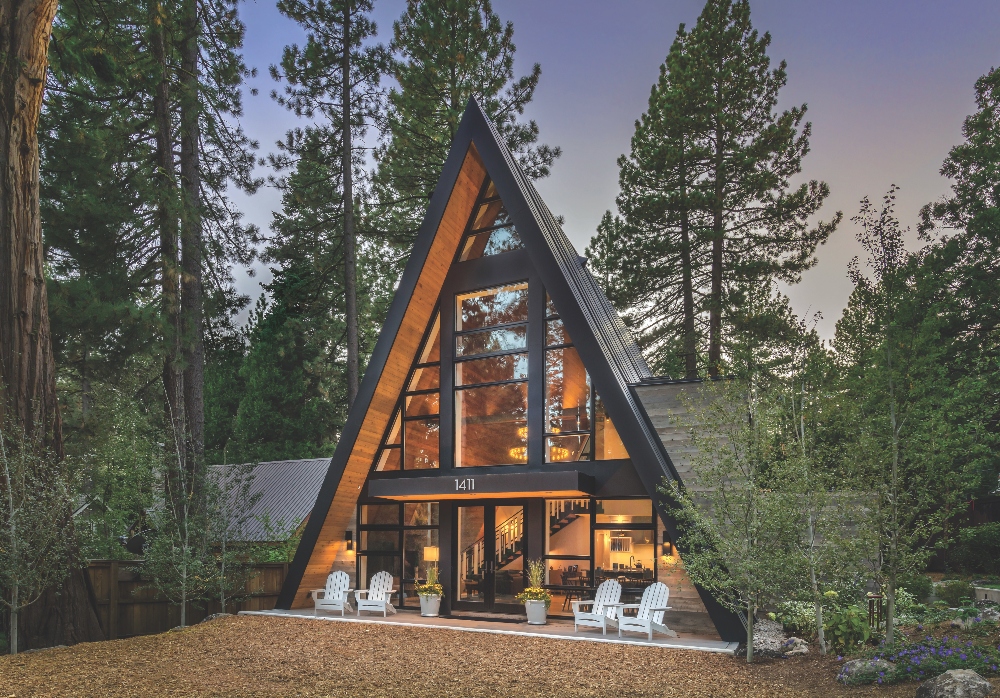 Just as a wildfire clears new room for growth, the accidental blaze that destroyed Carol Bastek’s charming vintage cottage in Tahoe City made space for something new, namely a strikingly modern A-frame designed by architect Todd Mather. “The A-frame’s bold, sharp exterior belies the inside, which is cozy and inviting,” Carol says. 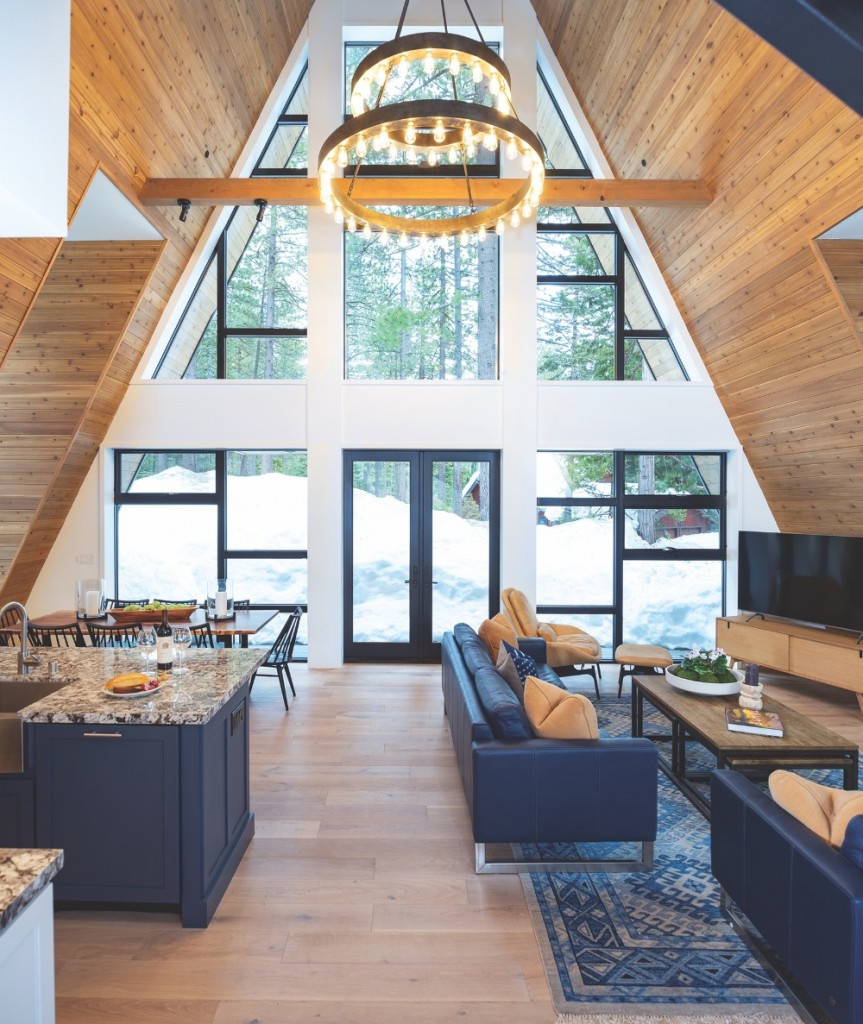 A patterned rug by Jaipur Living coordinates perfectly with the dark-blue sofa and loveseat by American Leather in front of the rustic stone fireplace. 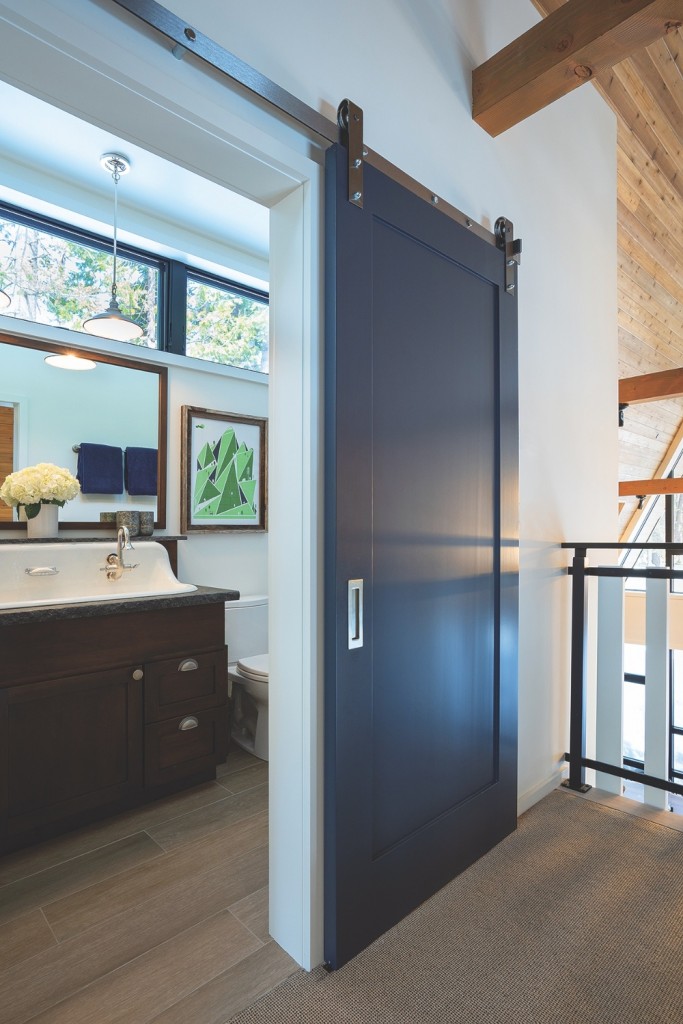 A custom wooden vanity with a white farmhouse sink fosters a rustic vibe without sacrificing functionality.

Replacing the cottage with an A-frame was the idea of Carol’s son, Scott. An avid skier, he envisioned a rustic retreat away from his home in San Francisco. The thought also appealed to Carol, who resides in New Jersey. Mather urged them to reconsider, pointing to the architectural style’s inherent limitations, which include a prominent roofline, tight interior spaces and a lack of natural daylight. But Carol and Scott were undeterred, so Mather began tinkering with ways to improve upon the classic form. 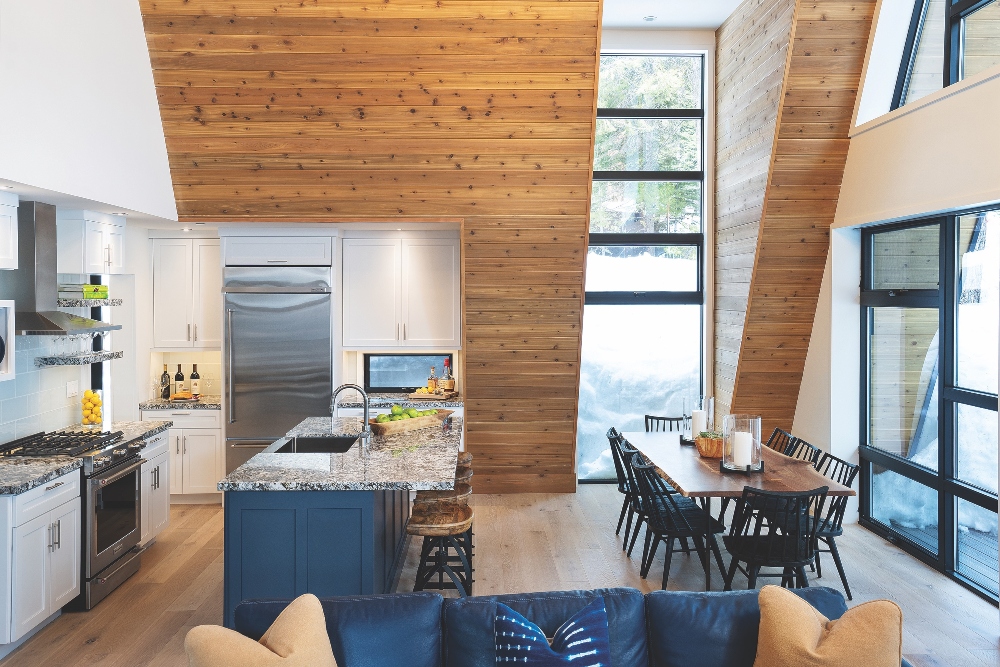 One of several throughout the home, a large dormer creates plenty of space for a well-appointed kitchen with classic white cabinetry, granite countertops and stainless-steel appliances by KitchenAid.

One example is the metal roof’s alternating “cap and pan” panel design, which was inspired by a cus- tom “Squaw Valley USA” bar code Mather generated online—a nod to Scott’s favorite ski resort. When it snows, the pans fill up, and the roof resembles black and white piano keys. “As a musician, I think it’s so damn cool and unexpected and whimsical,” Mather says. “If you’re looking at the side of an A-frame, all you see is roof, so I had to make it super-special.” 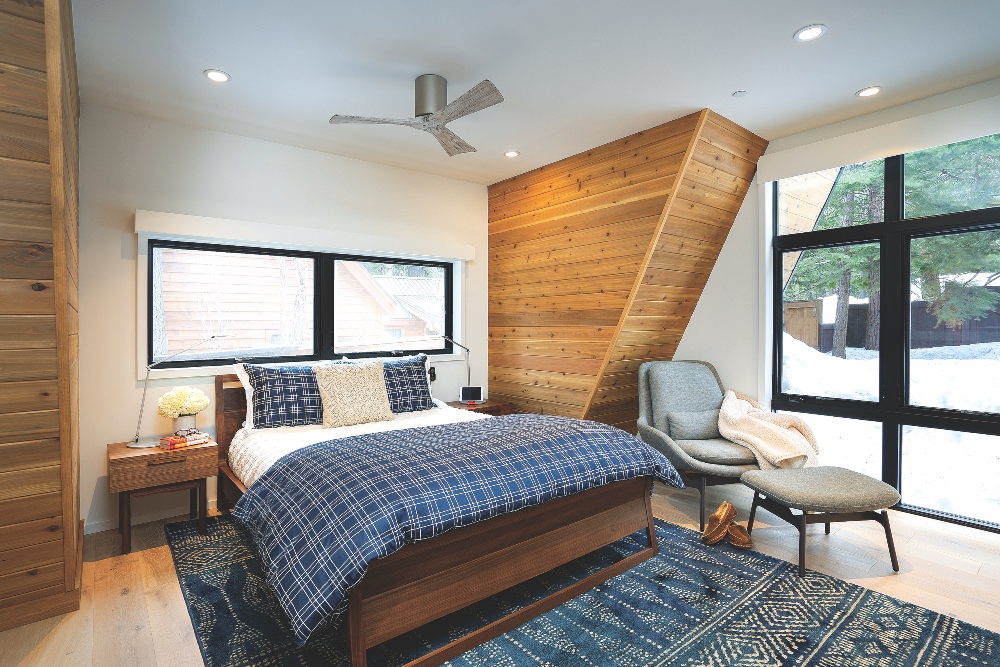 A dormer interrupts the knotty cedar ceiling in the bedroom, which is furnished with a wooden bed and nightstands from Blue Dot Furniture.

That’s not the only thing that makes it unique. To create more interior space, Mather added several barnwood-clad dormers outfitted with large windows that flood the interior with natural daylight. For example, the bedrooms have boxy dormers that allow you to sit up in bed—one a full wall, the other a win- dow box that Mather compares to an eyeball. And the dining area features a two-story dormer that frames a picture-perfect view of an aspen tree. 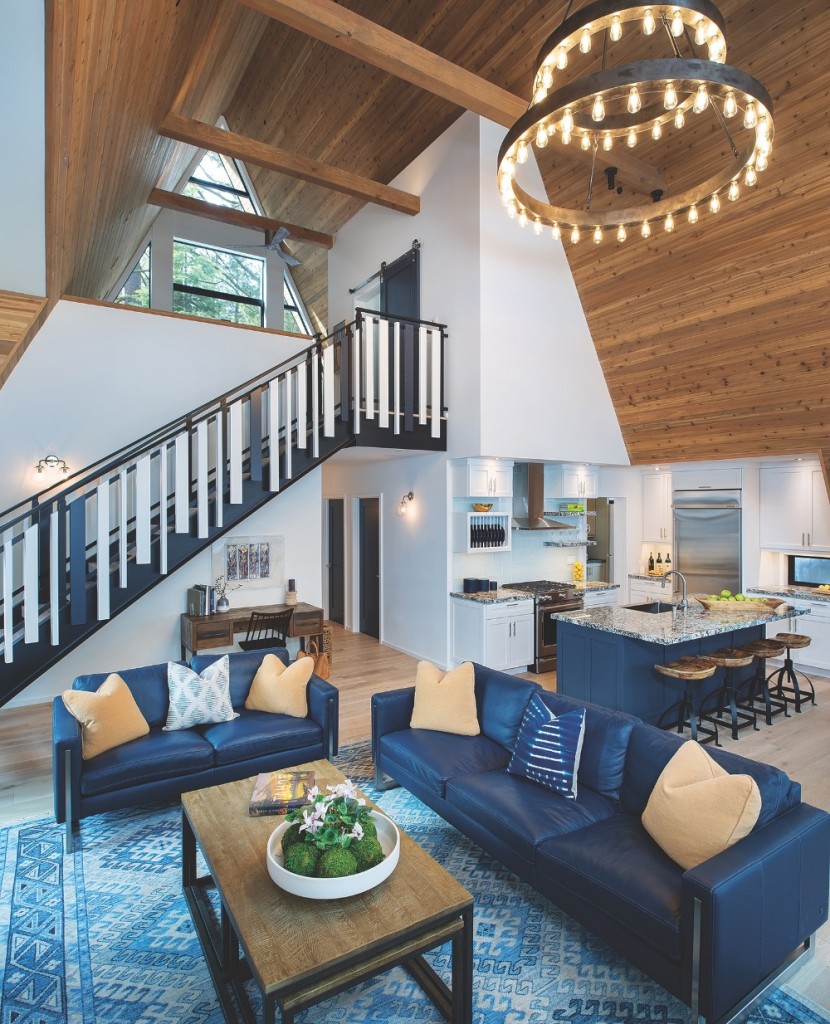 A tall dormer creates a sense of grandeur in the dining area, which is open to the kitchen and living room.

Interior designers Shannon Barter and Brady McClintock collaborated closely with Mather on the project, marrying Scott’s desire for a countrified retreat with Carol’s more traditional leanings. In the living room, for example, a contemporary sofa and chair covered in navy-blue leather face a massive stone wood-burning fireplace that offers warmth and ambience on frigid winter nights. “The blue is like a vein that connects everything,” Barter says. “It’s predictable and comfortable.” 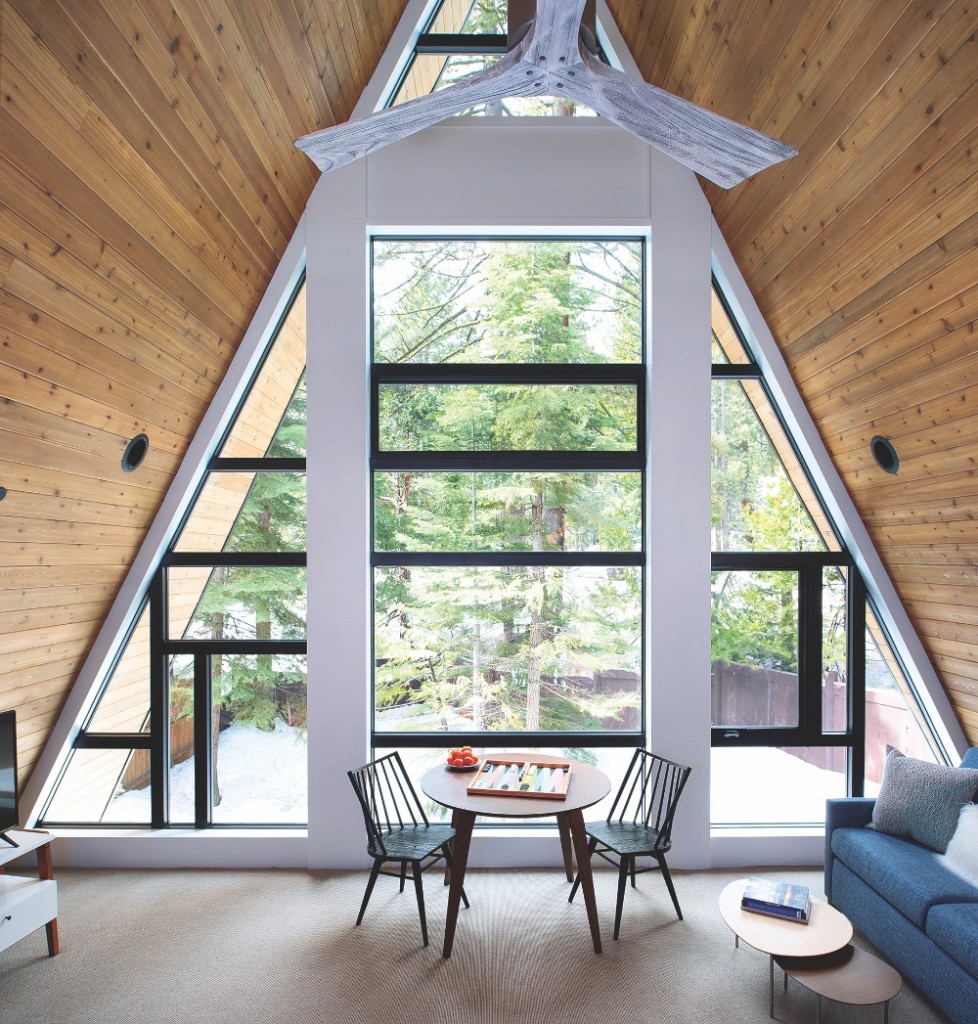 Balustrades in differing colors and lengths, collar ties at different heights and Mondrian-inspired windows by Andersen add an unexpected sense of whimsy.

Indeed, the designers repeated the hue on the is- land in the classic white kitchen and on several of the wood balusters on the curvaceous steel stairway to the second-floor loft area. Builder Brett Spadi and his crew cut the balusters into different sizes and painted them white, black and blue—an homage to the bar- code-inspired roof. “It’s incredibly unique,” Spadi says. “This house has a soul.” 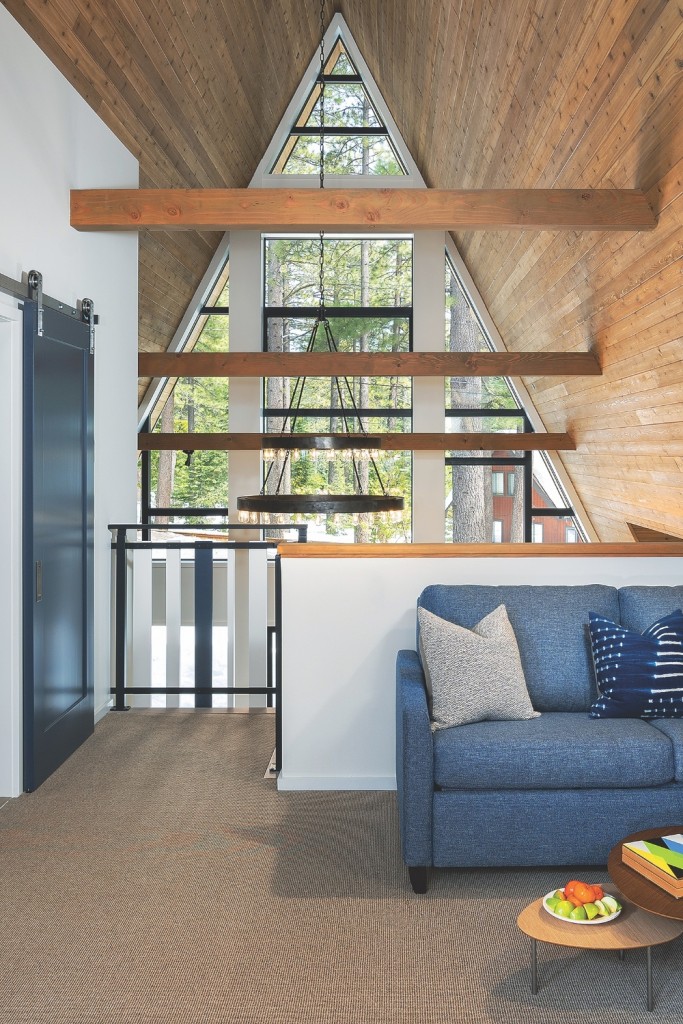 Located at the top of the stairs, a loft area offers additional seating and verdant vistas.

That’s especially true at night. Staggered in height, the home’s four collar ties contain an illuminated channel that reflects off of the knotty cedar ceiling, and the tiered iron chandelier likewise glows through the Mondrian-inspired windows. 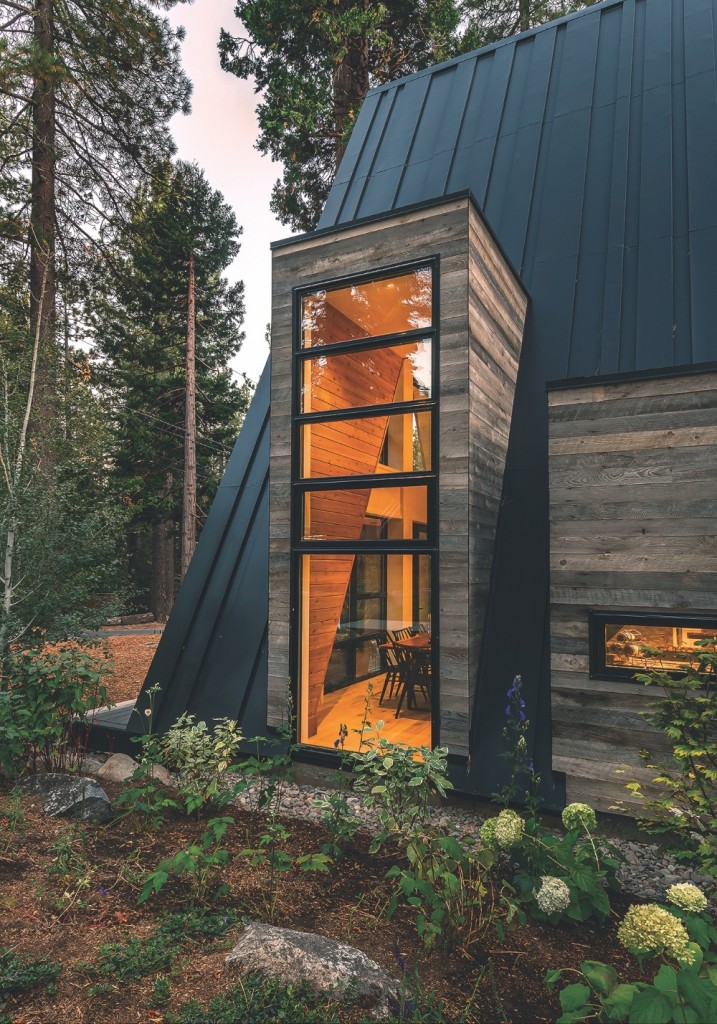 Thanks to a custom tiered iron chandelier by Newton Gallery from The Lighting Showroom, and an illuminated channel concealed within the collar ties, the A-frame appears to glow from the street.

Carol plans to spend about six weeks each summer at the A-frame, and it’s a weekend escape for Scott. When it’s warm outside, they often throw open the double doors and enjoy the intoxicating smell of cedar and pine drifting in with the breeze. “You have this curious sense of being outside,” Carol says. “It’s absolutely beautiful.”