At Home in a Slope-Side Treehouse

“If Harry Potter and Hansel and Gretel built a house together, what would it look like?” That was the question Gail Goodwin reiterated while planning and outfitting her Snow Bear Chalets, a trio of storybook treehouses on Whitefish Mountain Ski Resort’s Hope Slope.

“Every single thing that came into these houses, whether it was the sparkly Cambria quartz, or the Polywood deck furniture, or the Trex decking, or the cedar roof, whatever tiny detail, it all came down to that question,” she elaborates. 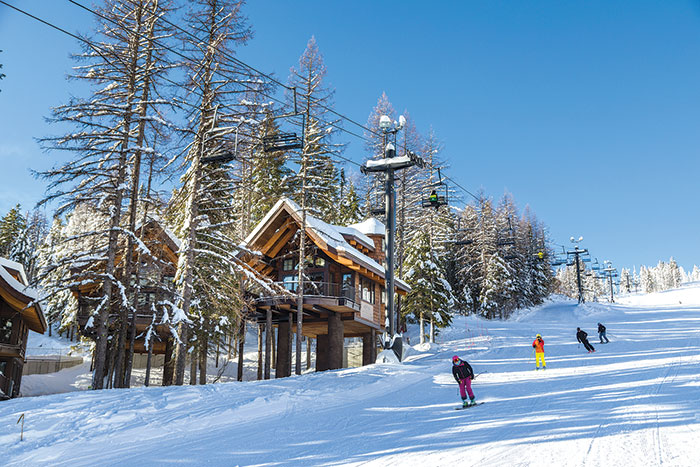 Each ski-in, ski-out treehouse has its own hot tub and deck, inspiring skier envy.

With sloping roofs, a soaring turret (lit from the inside by 600 twinkling fiber optic lights), swooping interior beams and steel support beams wrapped in synthetic bark, the Snow Bear Chalets are much more evolved than the plywood treehouses Goodwin played in as a child, but they evoke a childlike sense of wonder and imagination all the same.

“My dad built my very first treehouse in a big oak tree in Pennsylvania. To me, it could be a rocket ship one day, a fairy-tale princess tower the next—it could be anything I wanted it to be,” she says. “We wanted to bring out that same inner child in whomever stays here or skis past it.”

The chalets—named Ponderosa, Tamarack and Cedar after three tree species found in abundance on Whitefish Mountain—were built with Goodwin’s growing family in mind. Instead of one large home, three smaller residences give big groups room to spread out, making it the ideal spot for multigenerational families, friend  groups and company retreats. 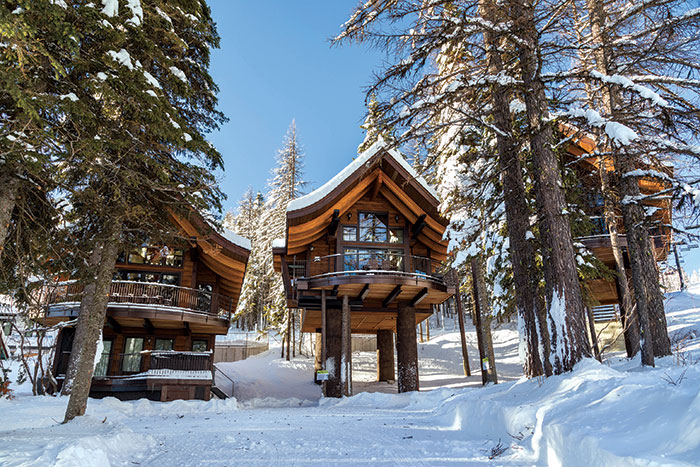 Not your typical treehouse: With cedar roofs and a soaring turret, these magical chalets make a statement on the slopes.

“No matter how amazing our families are and how great your relationship is, there’s something special about hanging with Mom and Dad and the kids and the grandparents, and then going back to your own chalet,” she explains.

The best perk? Situated just feet from the ski run and less than a minute from the nearest chairlift, the Snow Bear Chalets offer a true ski-in, ski-out experience. And after guests get their powder fix, they can watch the action from each treehouse’s private hot tub.

“It’s an enviable spot in the wintertime,” Goodwin says. “Skiers go by in blizzards and see people in the hot tub enjoying a glass of wine and shout, ‘I want to be where you are!’”