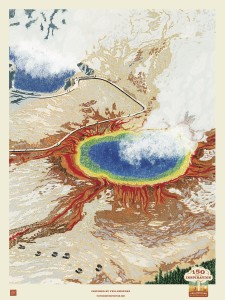 For Jackson artist Ben Roth, his mission to make the micro into macro is achieved in many ways—like sculpting a giant yellow dandelion or naming a 2D scenic aerial of Jackson Lake after the tiniest island in the piece. Regardless of medium, Roth finds a way to weave in his passion for the great outdoors. 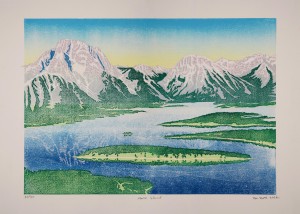 “My folks met in Jackson in the ‘60s. My dad worked as a fishing guide, and my mom worked the register in a candy store,” says Roth. “After I was born, we spent every summer and holiday in Jackson. Once I graduated college, I couldn’t imagine myself anywhere but here.” With a background in hospitality, Roth began working at hotels, yet always had an inkling toward art. He got his feet wet by creating sculptures and other metal works for several Jackson hotels, and when those pieces took off, he took his dream full-time. 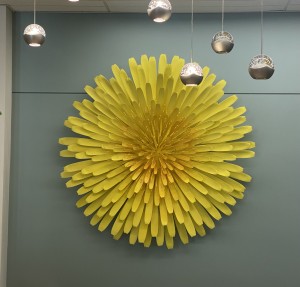 In Jackson, the town boasts a lively art community that centers around the incredible surrounding nature. Roth started Young Artists Revolutionary Designs (YARD), an after-school art program in which students home their craft and learn the business behind being an artist. “I discourage the kids from copying my own techniques, but rather to think creatively.”

Roth himself feels he’s at his most creative in the early mornings. When inspiration strikes, he sketches designs on a large chalkboard in his living room, or if he’s on the go, he doodles on a 3×5 notecard. “It’s all about rolling ideas around in my head. I find that if the idea doesn’t float away, it’s one I need to pursue further.” 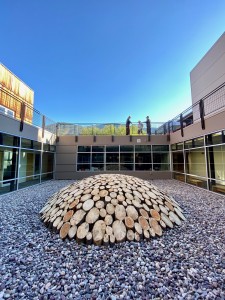 More recent projects include the 150th Yellowstone National Park commemoration poster. Using a woodblock print medium to craft the poster, Roth carves fine-tuned details into a wood stamp, later to be dipped into the vibrant colors most associated with Yellowstone.

“I want my art to speak on how we have so much to learn from the natural world. There’s a symbiosis in nature that we as humans fail to tap into,” says Roth. As he educates the young people of Wyoming and continues his professional career, his art helps viewers realize that nature provides all the tools needed for success.