Theresa Stirling’s artwork is steeped in nature—wolves in the wild, bison in the snow, breaching whales, luminous mountainscapes and sapphire seascapes. She came to art 15 years ago after a successful career in biotech marketing. “I was ready to switch gears to a more thoughtful life,” she says. Her encaustic (hot wax) paintings decorate private clubs and high-end homes in Aspen, Big Sky, Seattle and Kona. 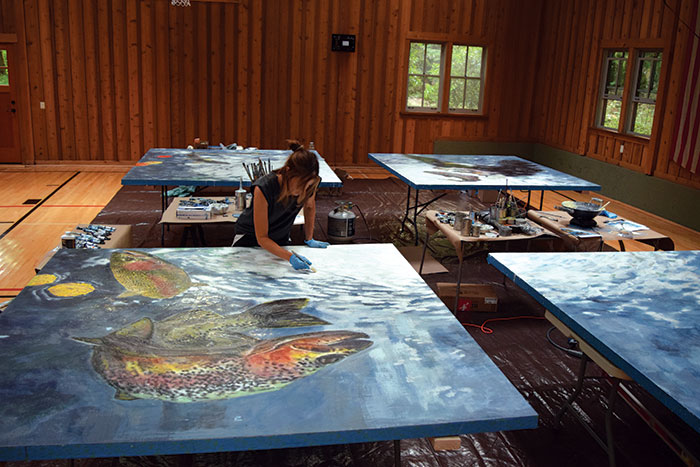 The mural for a Yellowstone Club home was painted in four sections that started as sketches in Stirling’s studio but were eventually moved to a neighbor’s gymnasium because the panels are so large. The entire piece is 27,000 square inches. [Photo by Crista Dougherty]

In Stirling’s studio on Washington State’s lush Olympic Peninsula, big sash windows flood the room with light. There are the usual paints and brushes and, taped to the walls, in-progress sketches for the different projects she’s working on. The fragrance of warm wax and the musky-woodsy scent of dammar (a natural tree resin) hang in the air. There are also hotplates, woks, griddles and an assortment of soup cans (in which to melt the wax). Masonry tools—trowels, scrapers and incisors—wait in a wooden box. Classic jazz and a softly snoring dog (Sadie) provide the soundtrack. 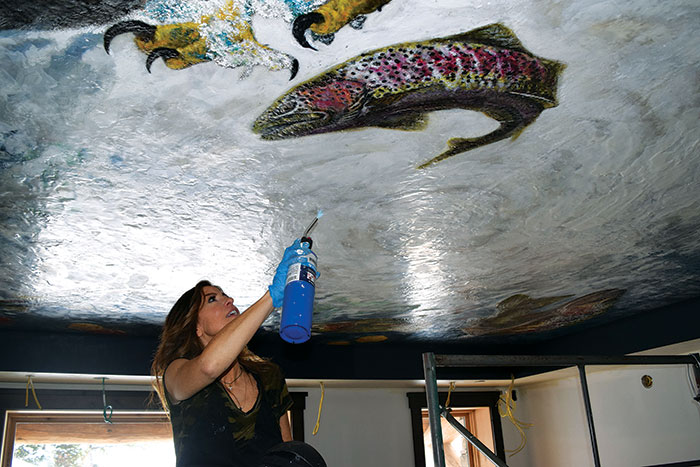 Stirling finds the back-and-forth motions of the blowtorch are meditative. [Photo by Dan Joseph Architects]

Stirling builds her paintings (on birch board) slowly, hand layering up to 20 thin layers of molten beeswax tinted with oil paint and colorful pigments. “I use pure beeswax mixed with dammar that I’ve ground in my coffee grinder,” she says. “The dammar provides stability, a little bit of gloss and increases the melting point of the wax.” Each wafer-thin layer is carefully heat-fused to the layer below. Stirling uses a blowtorch. “Watching the wax melt in front of you is ridiculously satisfying,” she says, adding that the repetitive back-and-forth motions of the blowtorch are meditative. 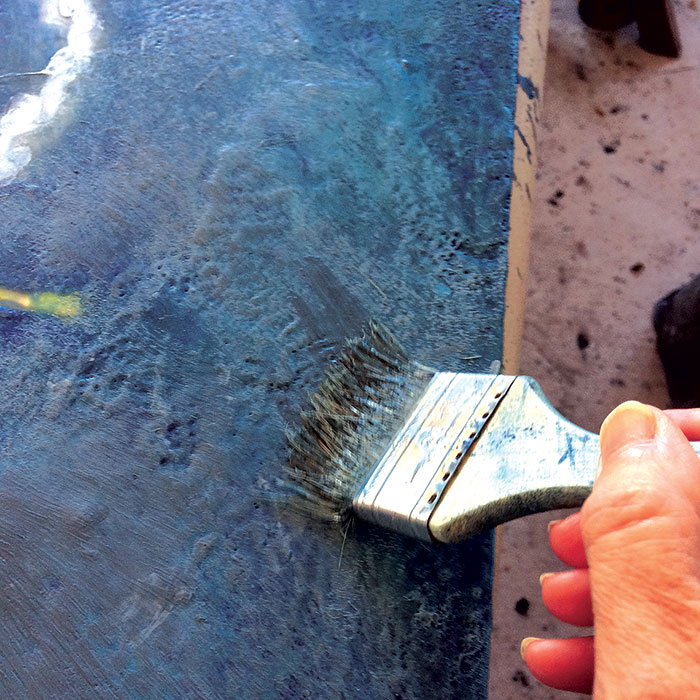 Each painting is built up of between 15 and 20 layers of both pigmented and clear beeswax. [Photo by Theresa Stirling] 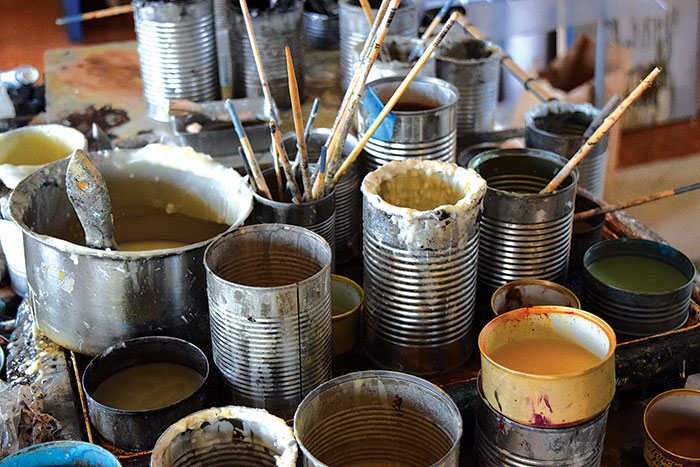 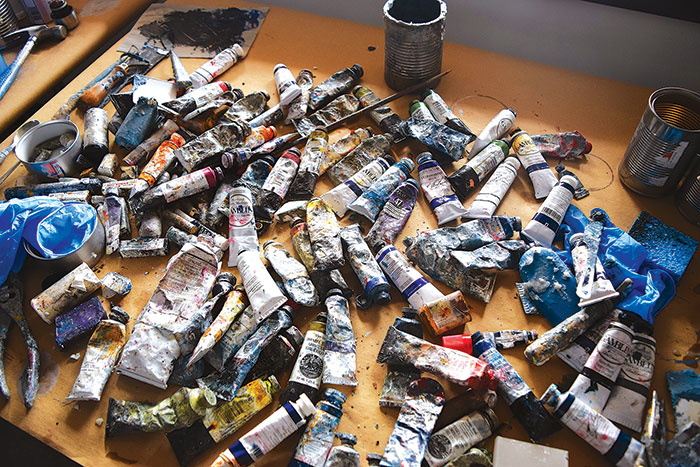 Sometimes she layers translucent wax directly onto a “naked” board—creating a sheer and enamel-like look. Other times, she draws an image on paper, glues it onto the birch board and begins applying layers of wax. “I play with optics and perspective,” say says, “pushing and pulling the wax to make the images appear nearer or farther away.”

She has just finished and installed a 27,000-square-inch ceiling mural in the media room of a home in the Yellowstone Club. It is her largest-scale commission to date. “The homeowner had a dream that she was underwater looking up at beautiful brown, rainbow and cutthroat trout … and that an eagle was swooping down to pluck a fish out of the water,” Theresa says. 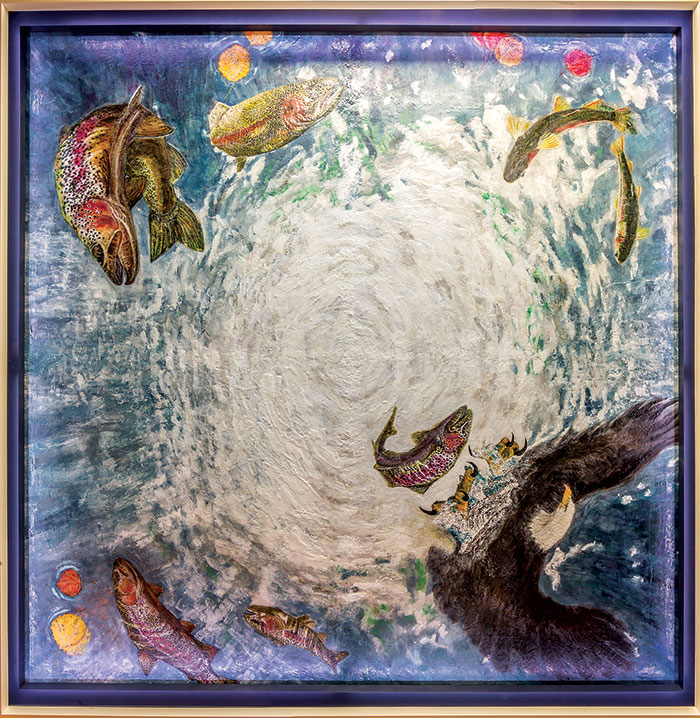 This ceiling mural, with wax-based paint, offers a trout’s-eye view of the natural world—looking up at the sky and the swooping eagle from the depths of a blue-green mountain stream.

She worked closely with the architect, builder, interior designer and lighting designer to make the homeowner’s dream a reality. “All of my custom pieces are a collaboration and a compilation of stories,” she says.

This ceiling mural was a complex yearlong project. The installation—300 pounds of wood and wax panels—took more than a week and involved scissor-lifts, scaffolding and yards of protective muslin. The result was exactly as the homeowner had dreamed. 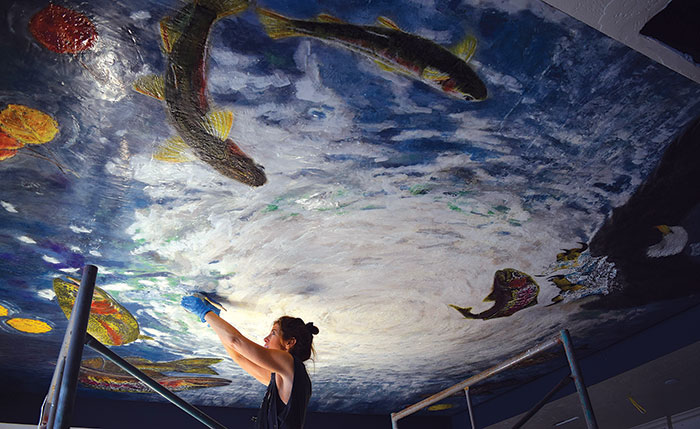 Stirling worked with local craftspeople to make sure the boards were tight and true. Then, she spent five days on scaffolding—touching up the edges and melding the panels for a seamless look. [Photo by Jackie Murphy]

ANCIENT GREEKS—dating back to the Trojan War in 1250 BC—applied multiple layers of hot wax and resin to waterproof the hulls of their wooden ships. In the Hellenistic period (323 BC-31 BC), artists began using this technique (called encaustic from the Greek word enkaustikos, to “burn in”) because it was both durable and sculptural. It didn’t take long for ancient Egyptians to adapt the use of wax painting. Best known of all encaustic works are the Faiyum mummy portraits—impressive, Modigliani-like images—buried in (and preserved by) the sands of Egypt and discovered by 19th-century archaeologists. Despite being more than 2,000 years old, they are still as fresh as if they had been painted yesterday. Excellent examples are on display at New York’s Metropolitan Museum, the British Museum and the Louvre in Paris.