Chandler Good Strike was born on the Fort Belknap Indian Reservation in northern Montana, a member of the Gros Ventre tribe. To provide stability in his life and a solid education, his mother sent him to an Indian boarding school in Pierre, South Dakota, when he was six years old. “I remember the school wasn’t great at teaching reading and writing, but they encouraged students to draw pictures and make art,” he says. “Art lined the hallways.” 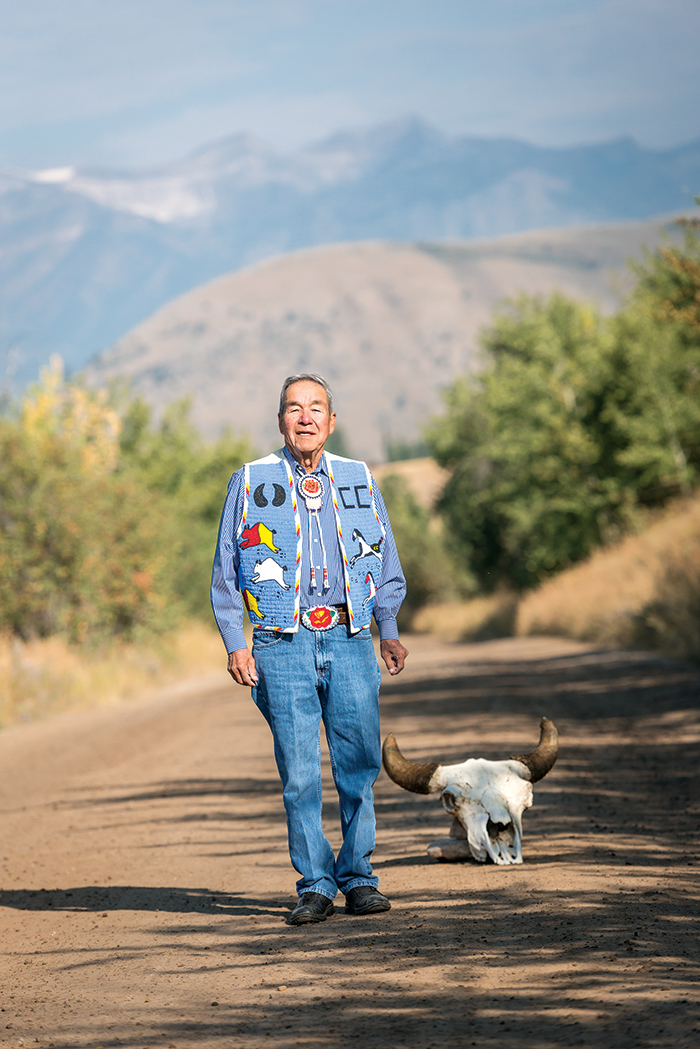 Chandler Good Strike is a member of the Gros Ventre tribe. He wears a beaded vest made by a Sioux woman that was presented to him as a gift for being a good father-in-law from his son and daughter-in-law. The skull is from a 25-year-old male buffalo.

In high school, he attended a different boarding school, the Flandreau Indian School in South Dakota, and it was there he noticed “a sharp-nosed girl who got straight A’s”—but she left after a year. After graduating from high school, he joined the U.S Air Force and became an airborne radio operator, traveling to 17 countries and acquiring 5,000 hours of flight time in eight years. On a trip back to Japan, he stopped to visit his brother in Oakland, California, and saw a sharp-nosed girl walking down the street. “Is that her?” he asked his brother. It was the girl from the Flandreau School; they were married in 1963.

Thanks to Richard Nixon, Good Strike landed a good job with Xerox after the Air Force. “In the 1960s, Nixon created a program to train Native Americans in tech jobs,” Good Strike says. “I’m grateful to him.”  He worked at Xerox for 30 years.

The Chief's Blanket is painted with a war bonnet symbol and tells a story. "We didn't have words, says Good Strike. "We told stories through pictures."

When he retired in 1992, Good Strike could have lived anywhere in the U. S. Yet he moved back to his Montana roots, the Fort Belknap reservation, to create art. He makes items that existed in the 1800s, buffalo robes, painted hides, hand drums, shields and parfleches— dried rawhide vessels that function like a suitcase for natives to carry their dried meat. He uses buffalo, elk, deer and antelope hides for his pieces; some are Indian tanned or brain tanned, and some, like the large buffalo hides, he buys commercially. He started out painting with natural earth paint but found his clients prefer watercolors: “People like pretty paint,” he says. 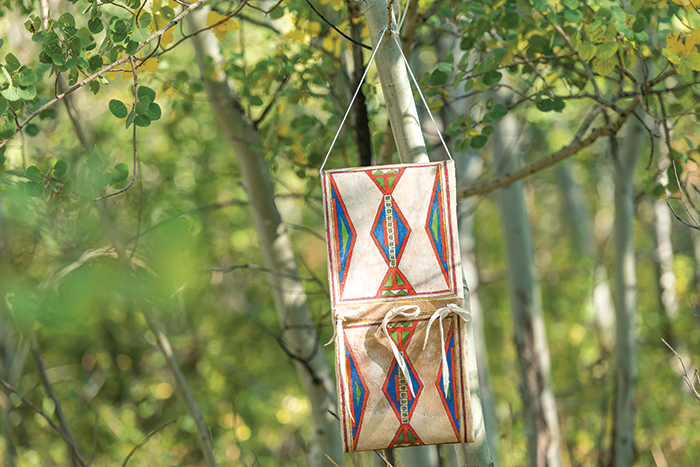 A parfleche that Good Strike made hands from a tree; these "suitcases" carried dried meat for Native Americans.

Though he’s traveled to many markets, including the Santa Fe Indian market, to sell his work, these days, at age 82, he only attends the Western Design Conference Exhibit + Sale in Jackson, Wyoming. “This year may be my last,” Good Strike says. “It’s hard to drive there and set up my booth at my age.” 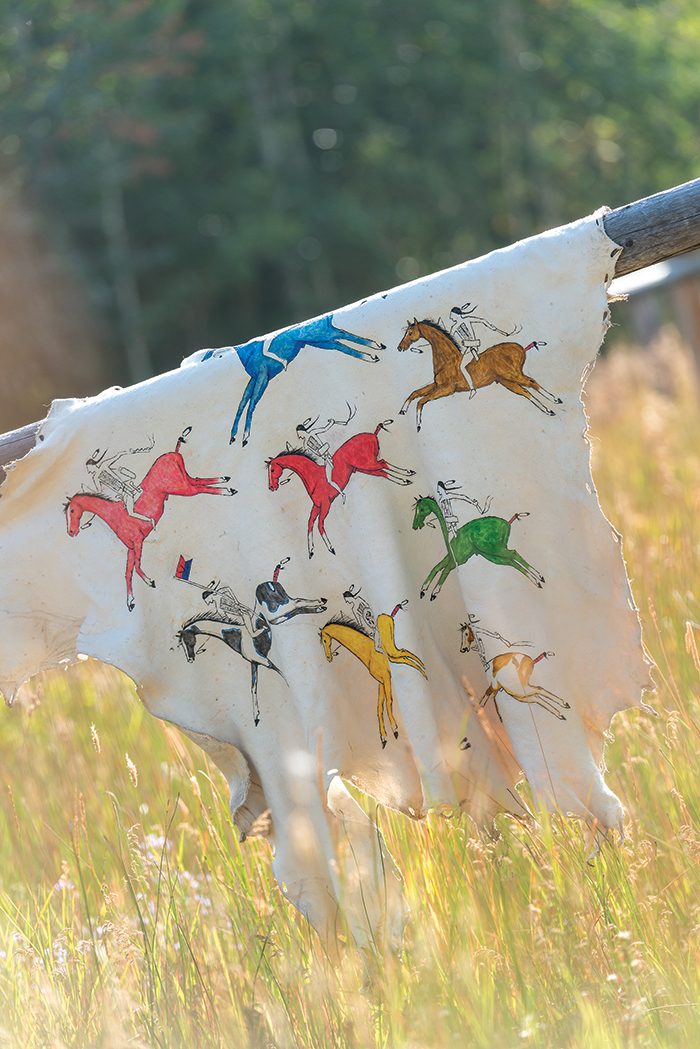 The holes around the deer hide exterior are used to stretch the hide before it is painted. This scene is called "After Little Big Horn Battle."

He’ll be bringing a painted hide telling the story of the Gros Ventre tribe and another depicting the Battle of the Little Big Horn to the show. It can take three to six months to paint a buffalo robe, which he sells for prices ranging up to $15,000. 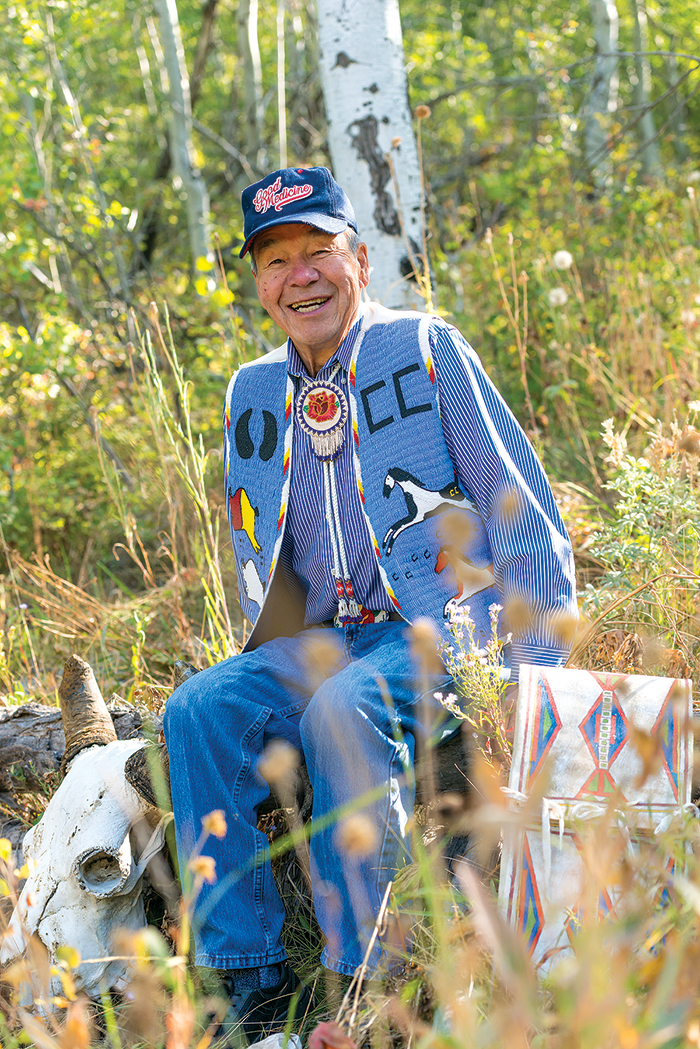 Good Strike is at home in the natural world.

Good Strike, with his wife and son, is active in preserving their native culture; currently they are writing a grant to start a cultural museum in Hays, Montana, near the Belknap reservation. Of making art, he says, “You feel good when you do something and someone says, ‘that’s nice.’”