There’s an old adage that warns against doing business with family.

Happily, Nate Russell’s in-laws chose to ignore it. The couple—along with their six children and seven grandchildren—had been renting vacation homes on northern Montana’s Lake Blaine for years. But as rentals became more difficult to find, their thoughts turned to buying a permanent home.

They finally found a house at auction. It only needed a bit of work—a simple remodel and addition, the couple thought—but its views of the water and forested shores were flawless.

Unfortunately, they soon learned that their new home’s foundation was unstable and the structure untenable. So they made a bold decision: They asked their son-in-law Nate Russell—an architecture student in his first year of graduate school—to design an entirely new house.

“I said no at first,” Russell recalls. “I had only done one summer internship. But my father-in-law said, ‘Jump into it and we’ll get it done.’”

Russell partnered with local contractor Dave Radatti of Mindful Designs. “I knew I needed someone very energetic who was willing to work with a student,” Russell says. “I was also looking for someone who had experience with a very high level of detail and craft. Dave was perfect.”

The long, narrow waterfront site dictated an equally elongated structure, but Russell’s in-laws had requests of their own: Their new home would have to withstand the harsh climate and be easy to maintain. It needed seven bedrooms—each with a deck and a lake view—plus a place for the grandchildren to sleep. The style would be up to Russell. 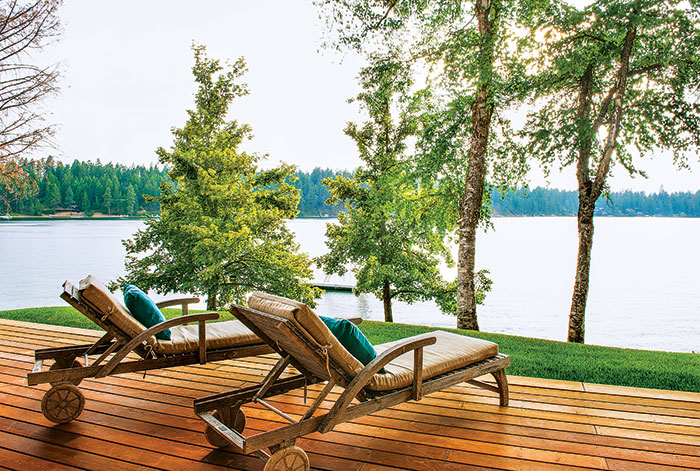 From the street, Russell’s design is unassuming: a low-slung cedar-clad home with a modest entry that’s difficult to discern. 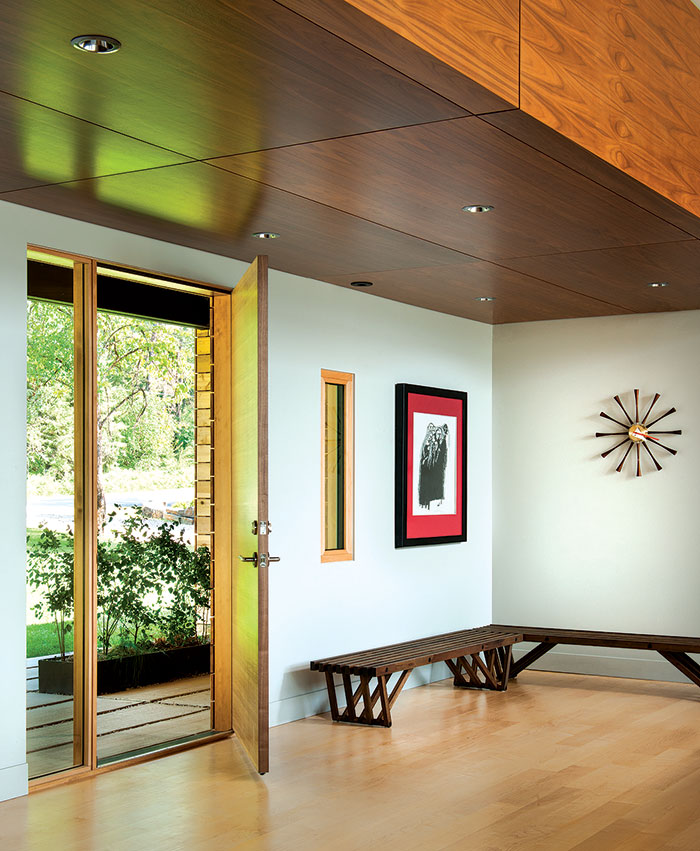 Inside, a small foyer with a walnut-paneled soffit provides a quiet entry. Then, “Wham!” says Radatti. “You’re in a room that seemingly floats at the edge of the spectacular lake.” 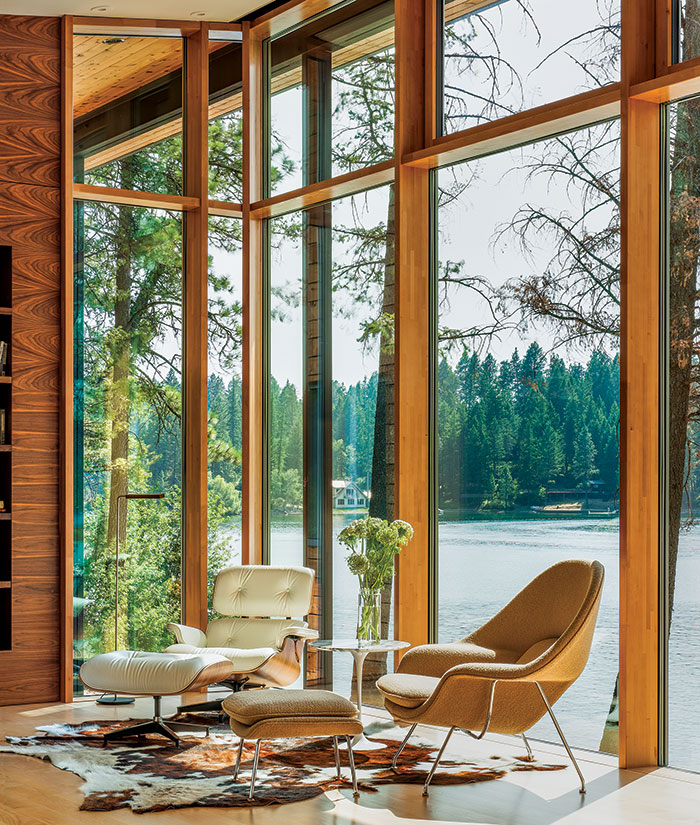 That striking great room is dominated by a 24-foot-tall wall of glass that extends from the roof down to the home’s lower level, which is built into the natural slope of the site. Russell envisioned the broad window’s vertical mullions mimicking the tall trees in the nearby cove. 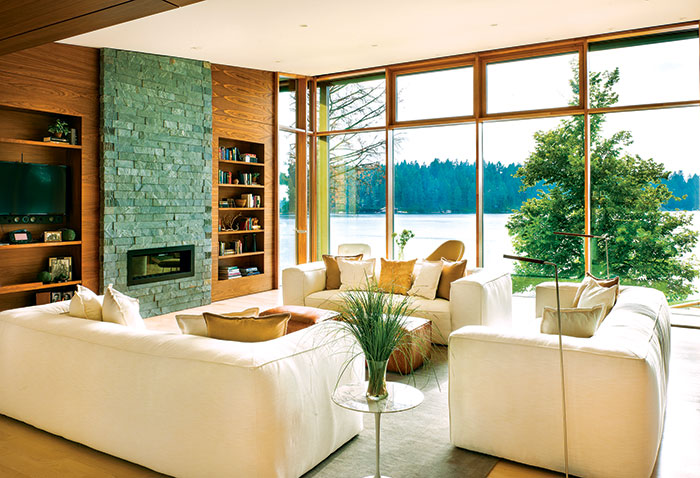 For the fireplace wall, Russell chose Pacific ashlar stone from British Columbia for its uniform color and tight graining. 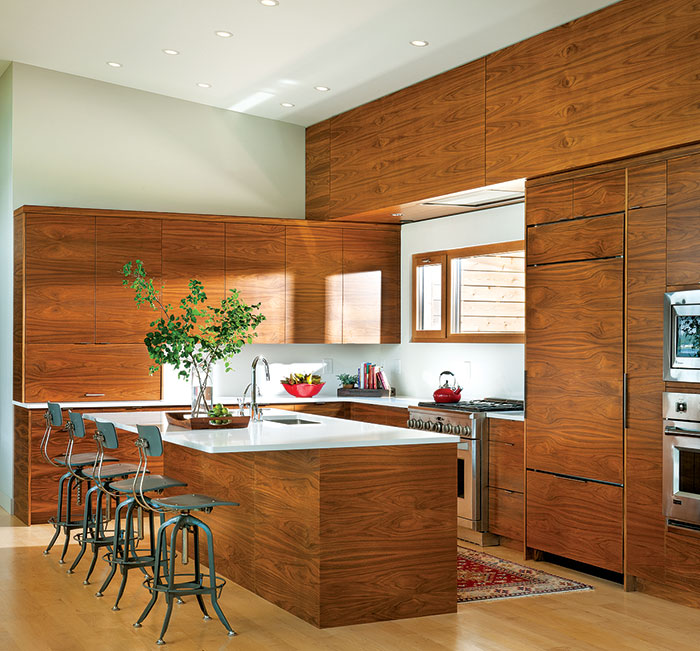 The kitchen’s horizontal windows frame the distant landscape. Here, as in the great room, a limited materials palette featuring matched-grain walnut allows the focus to remain on the views. “We’d never had a modern house before, but we like the way the landscape becomes the decoration,” the homeowner says.

To fulfill the owners’ request for seven bedrooms that open to the outdoors, Russell and Radatti designed a lower-level bunkroom that sleeps 12, and two glass-walled offices that convert to sleeping spaces. Each offers a comfortable Murphy bed with a retractable ceiling-mounted privacy curtain. 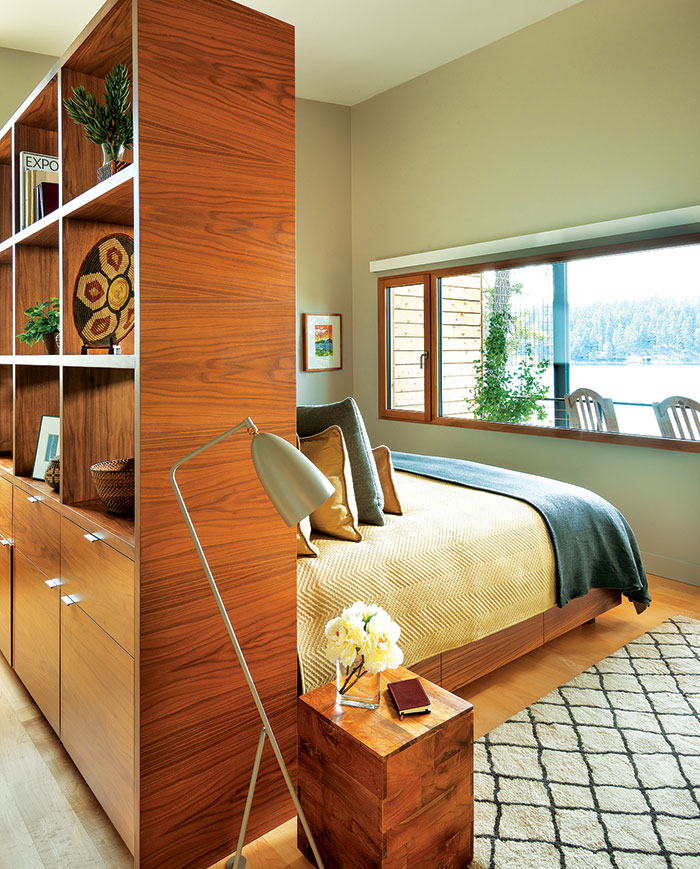 The master bed and casework were designed by Russell and built by Jerry Short Cabinetry and Millwork of Hayden, Idaho; open shelving gives the adjacent master bathroom a view through the bedroom to the lake. 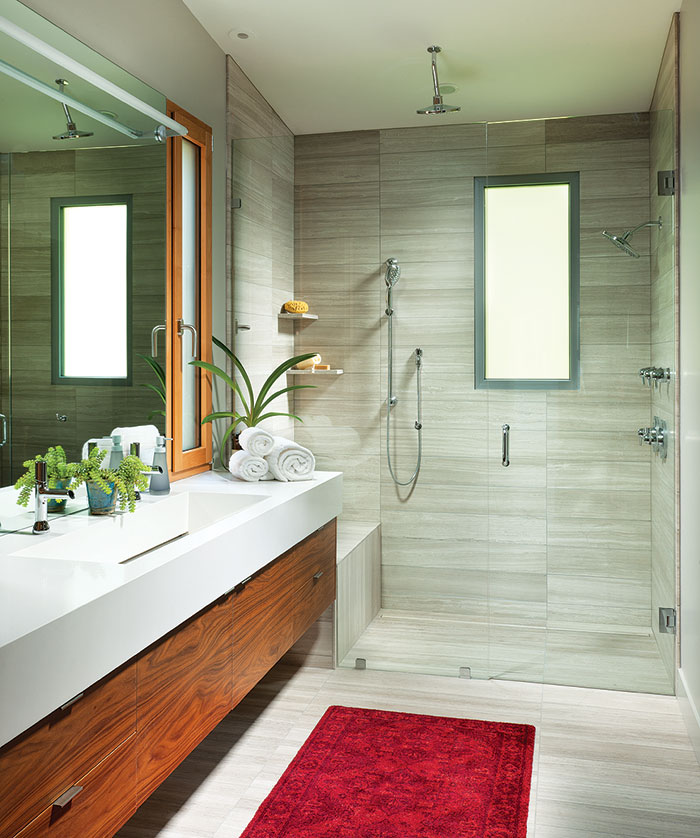 A bathroom’s limestone tile, cut across the grain, is “enormously fragile but looks like petrified wood,” Radatti says.

A quiet reading nook with a built-in window seat and shelving celebrates the beauty of the grain-matched walnut Russell used throughout the house. A dropped soffit that runs the length of the main floor creates a feeling of intimacy in this otherwise open space. 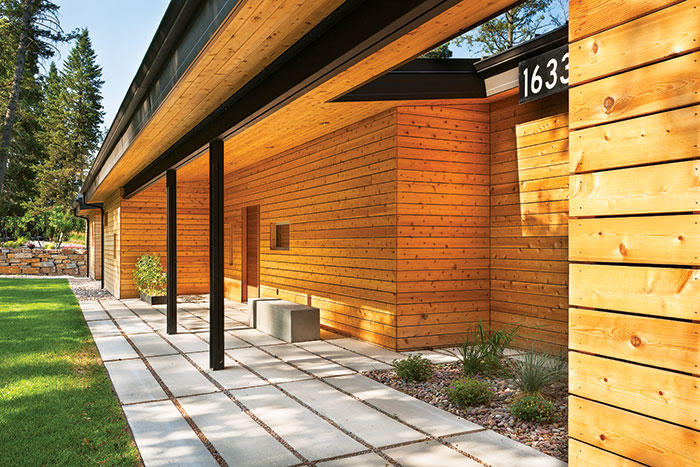 Elongated poured-concrete pavers echo the horizontal lines of the cedar siding in a simple yet refined way.

During the design process, Russell realized the home’s elongated design would present a challenge: “How do we all stay connected and together?” His solution is an exterior rear staircase that follows the slope of the site, connecting the home’s two levels to each other—and to the lake. “The kids play on the slope, then climb up the stairs,” Russell says. “From there, they can see people on the upper deck, in the hot tub, on the boat dock and inside the house.” 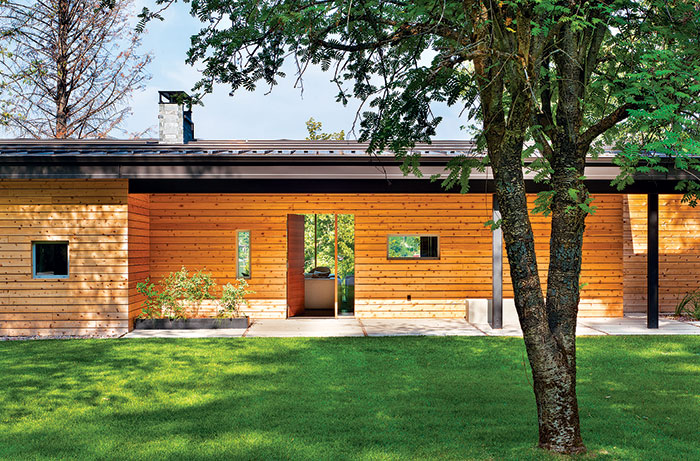 The new home works on every level, literally and figuratively. “It comes back to having a strong theory, a strong essence,” Radatti says. “If the architectural soul of the home is strong enough, everything designs itself.”

And though it certainly wasn’t their intention to build anew, says the wife, “I’m glad the original house turned out to be no good, because what we ended up with turned out to be more wonderful than we ever could have imagined.”

As for Russell, it seems his future as an architect—and son-in-law—is secure.

CLIMATE CONSIDERATIONS
Lake Blaine, nestled at the foot of the Swan Mountain Range in Montana’s Flathead Valley, is beautiful and serene in summer—and subject to heavy snows, high winds, driving rain and extreme cold the rest of the year. Builder Dave Radatti lives here, so he understands the challenges and builds homes that weather the storms comfortably and efficiently—using smart techniques like these:

WINDOWS
“Thanks to triple-paned Unilux windows from Germany, there are no cold drafts, even on the coldest winter days. You can stand in front of that curtain wall, floating above Lake Blaine, and feel completely warm and comfortable.”

FRESH AIR
“With a home this airtight, we use a state-of-the-art heat-recovery ventilator to manage indoor/outdoor air exchanges.”

DURABLE MATERIALS
“The siding is untreated cedar, left to age and silver naturally over time, which creates a timeless look with virtually no maintenance. There is a 3/4-inch air channel behind the siding that allows for cooling convective air flow during the hotter months.”