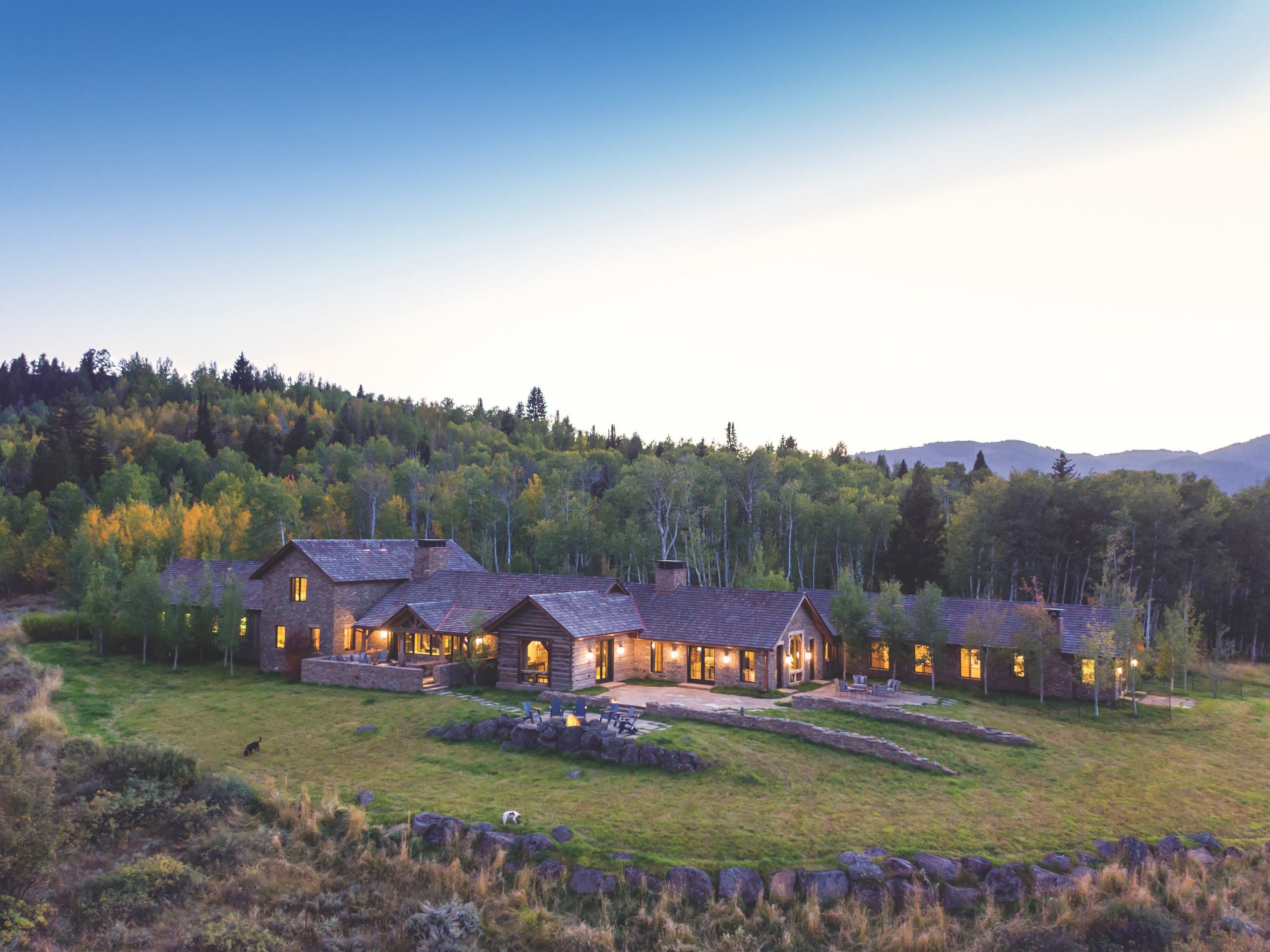 Old World materials and modern know-how come together in this Jackson, Wyoming, home designed to “walk softly on the land.” | Photography by Karl Neumann

Sometimes finding the perfect piece of property is a happy accident, as it was when a couple stumbled upon their pristine valley plot in Jackson, Wyoming. 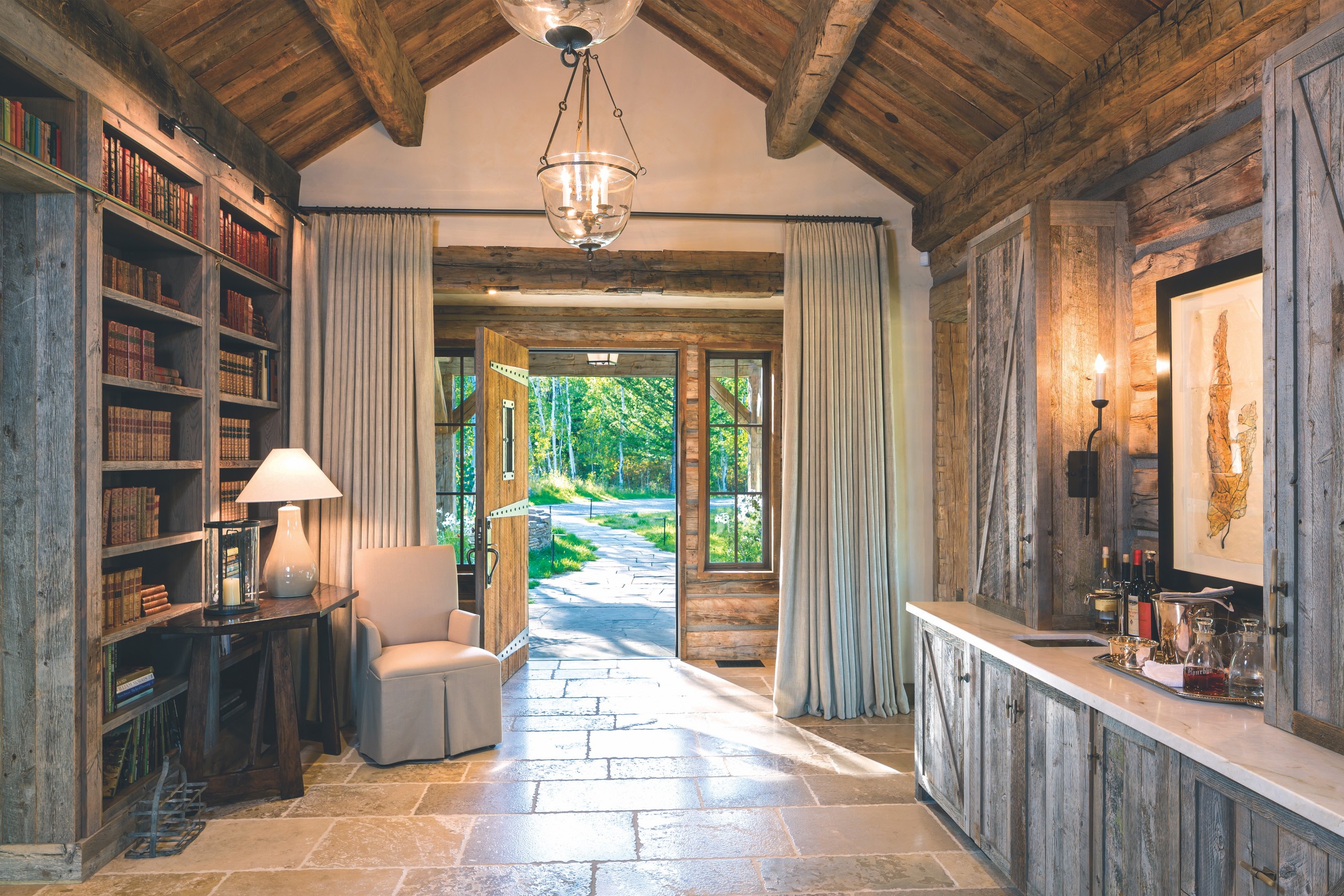 The entry hits the right mix of rustic and refined thanks to plenty of reclaimed wood and stone paired with a Formations chair, console and lantern and Rose Tarlow lamp.

“We found it just before the area became a real estate hot spot. We had lost a previous lot to other buyers, so we had to be poised to buy,” says the homeowner. “We didn’t even appreciate the magnificent views that this property had until we had finalized the purchase.” 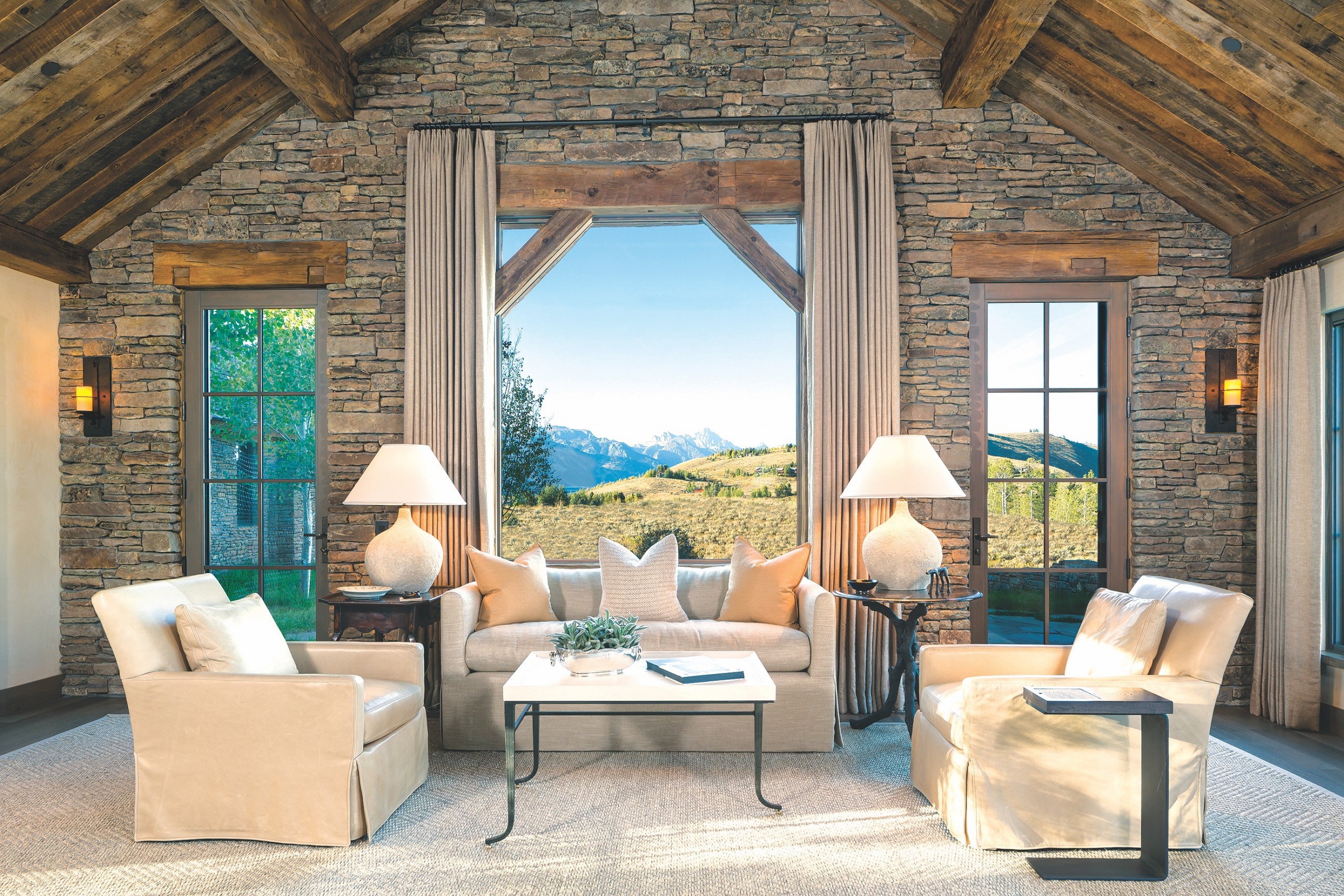 The elegant living room features breathtaking views and chairs from Lee Industries along with a sofa and three-legged coffee table by Saladino.

When it came time to build a full-time residence, they knew they had to assemble a team with enough talent to carve out a home cozy enough for two but also grand enough to handle a steady cavalcade of family and friends. 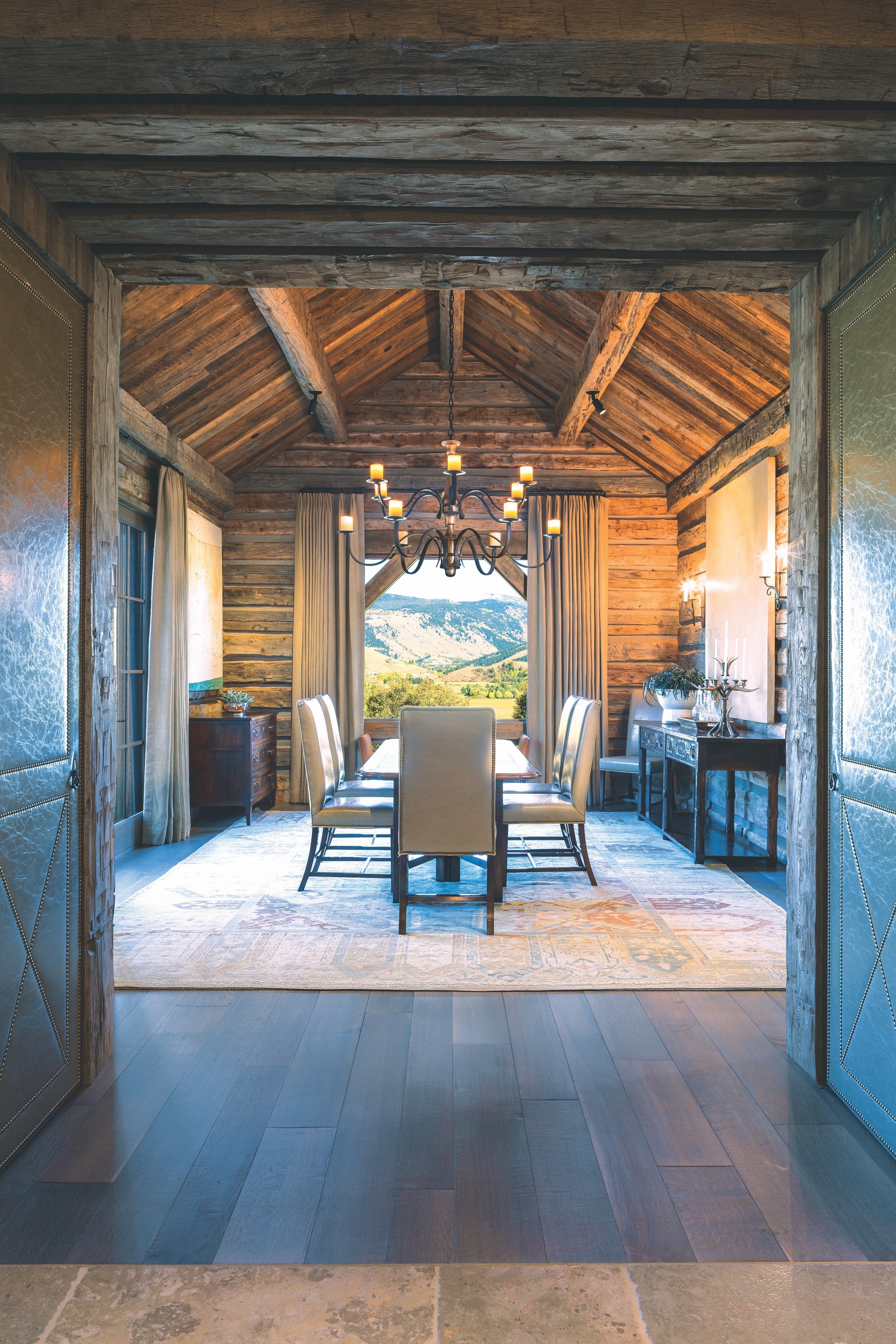 The generous dining room is outfitted with an antique rug, Formations table and Holland Macrae chairs.

Enter Jonathan Foote, a well-respected Montana-based architect who is known for his devotion to craftsmanship, reclaimed materials and the surroundings. He’s also noted for a design style that’s heavily influenced by the region’s homesteading past, back when pioneers started with a single cabin and added on as their families grew in size, connecting new spaces with a series of hallways. 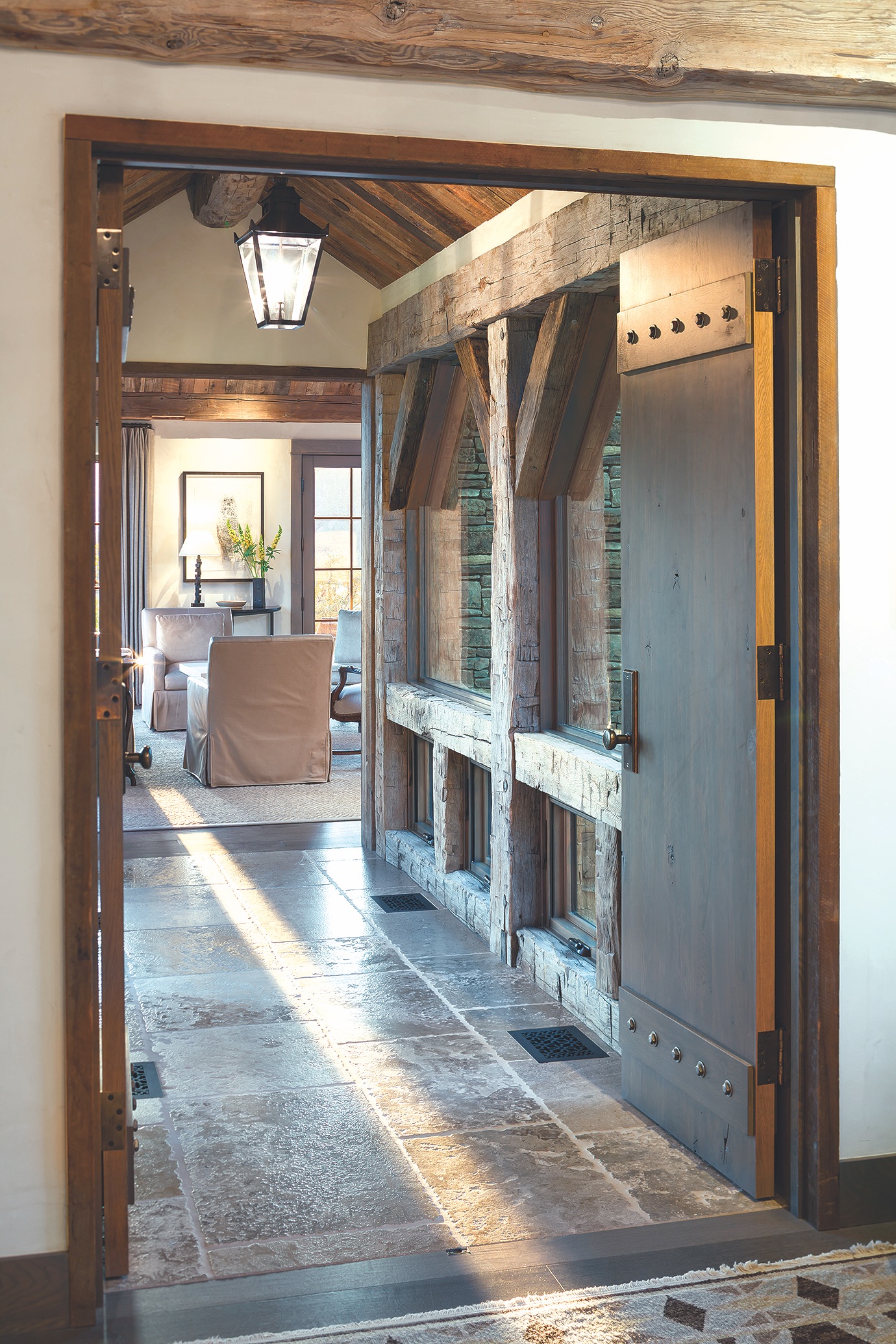 Explains Mark Pollard, managing director of OSM Construction, “Here, the pods are all connected but defined from each other. It’s custom architecture centered around reclaimed materials, which can be a challenge—finding it, crafting it and shaping it into new design—all while trying to create something that looks like it was built sometime 200 years ago.”

That’s exactly what appealed to the homeowner. “By definition, with Jonathan designing our house, we knew it would have a certain style. He says the mission of his architecture is ‘walk softly on the land,’” she says. 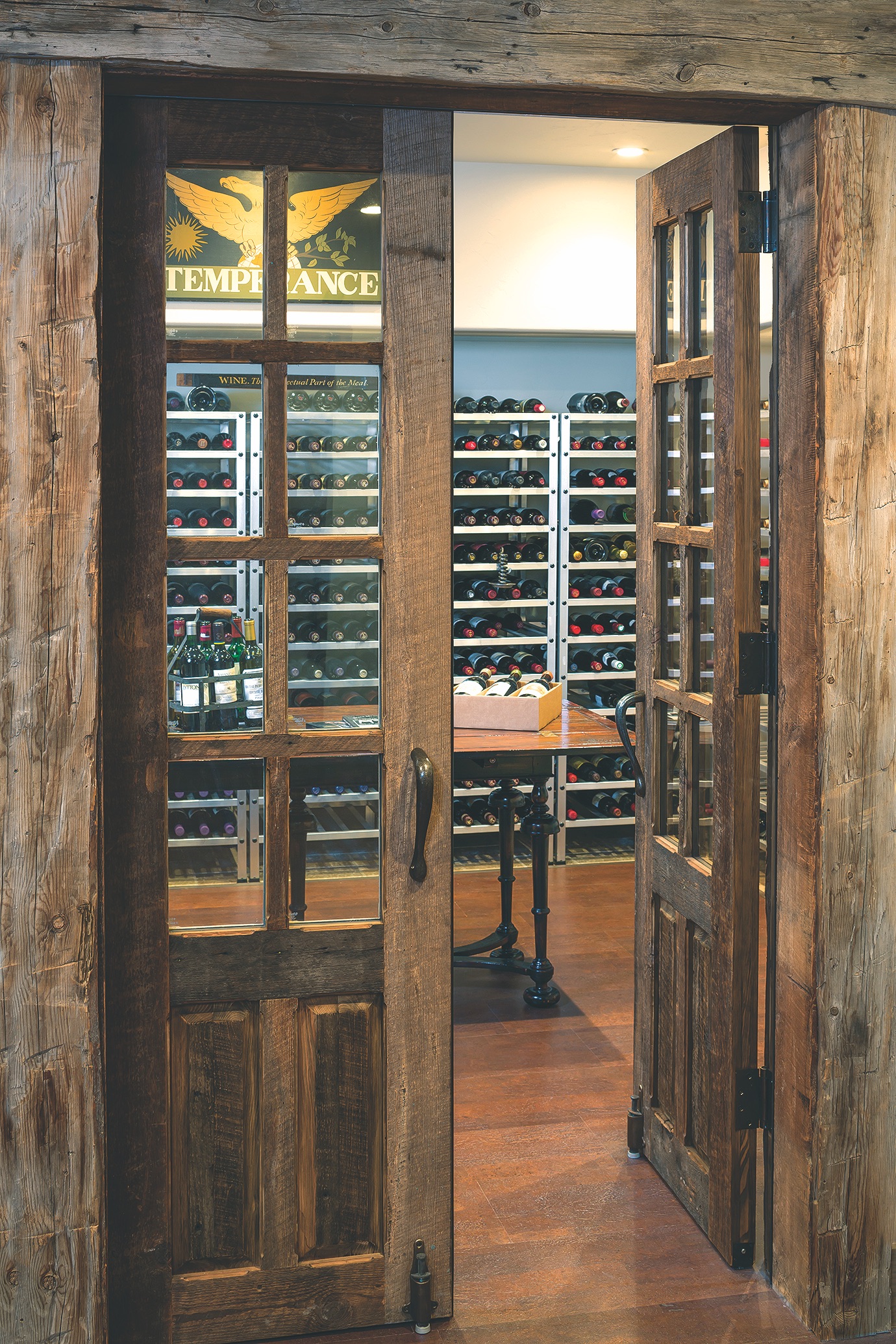 The saloon-inspired wine room was a real labor of love, as the homeowners enjoy sharing wine with friends

The couple also enlisted the expertise of North Carolina-based interior designer Jane Schwab during the earliest phase of the project. Schwab brought with her a very firm understanding of Foote’s aesthetic—the architect designed her Jackson vacation home back in 2002.

While she worked with the homeowners on their list of must-haves for the interiors, Schwab says Foote’s vision really laid the groundwork for the home—nicknamed “Aspen’s Edge”—from the outside in. 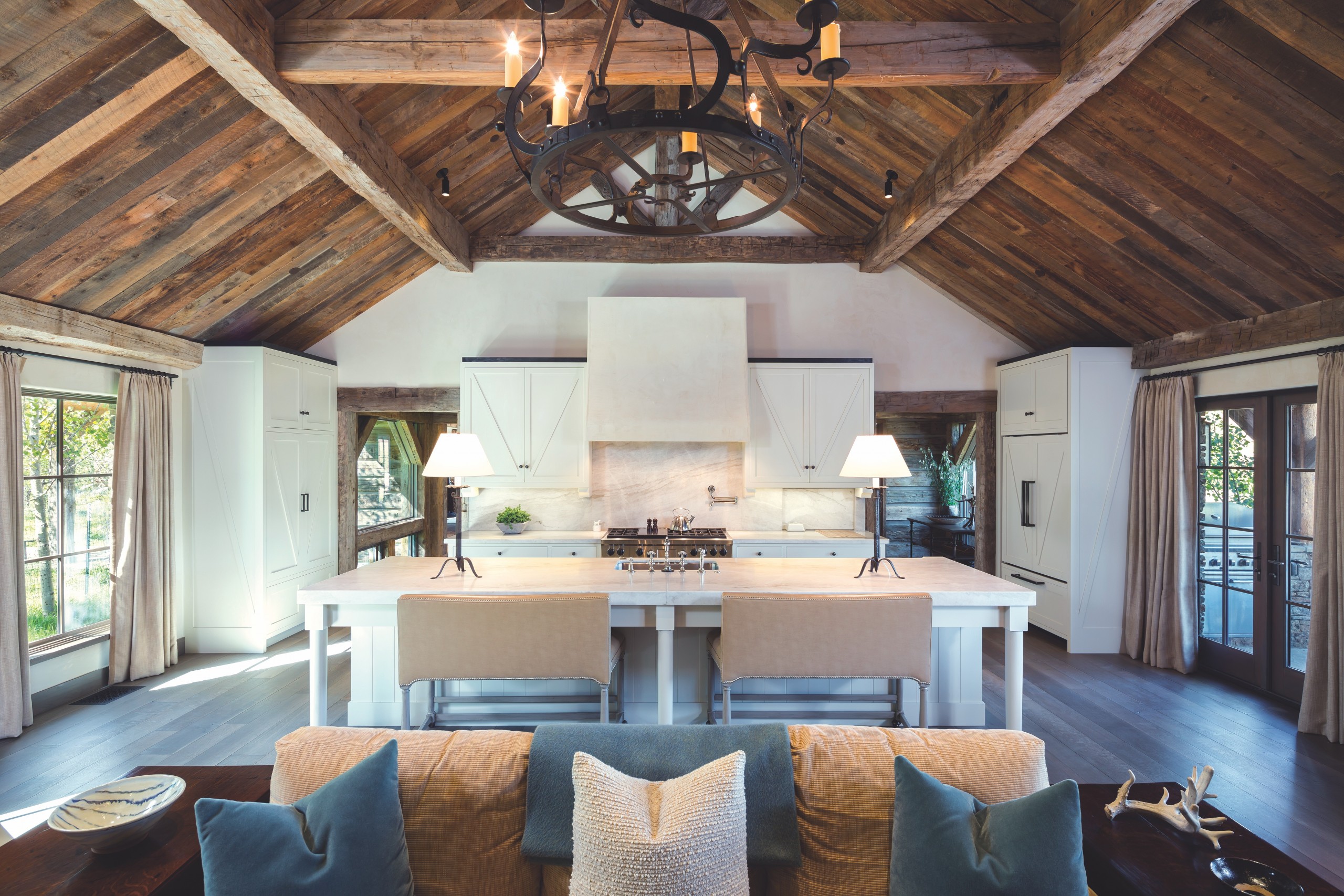 Because the homeowners love to cook, their designer carved out plenty of storage with cabinetry painted in Benjamin Moore Creamy White. Guests take five at the huge island (more than 13 feet long!) in custom bench seating upholstered in Kravet Ophidian faux leather.

“Jonathan just brings a wealth of talent. The siting of the house is brilliant. The views and how it’s nestled into the property along with the materials—all those things combined make the house what it is and give it the depth and base from which everything else emerges,” she says.

As Foote and his team focused on assembling Montana moss rock, reclaimed siding and log stacks, Schwab designed a pretty-yet-practical kitchen, came up with smart storage solutions and collaborated with the homeowners on an out-of-this world wine room outfitted with an elevator for extra-swift bottle delivery. 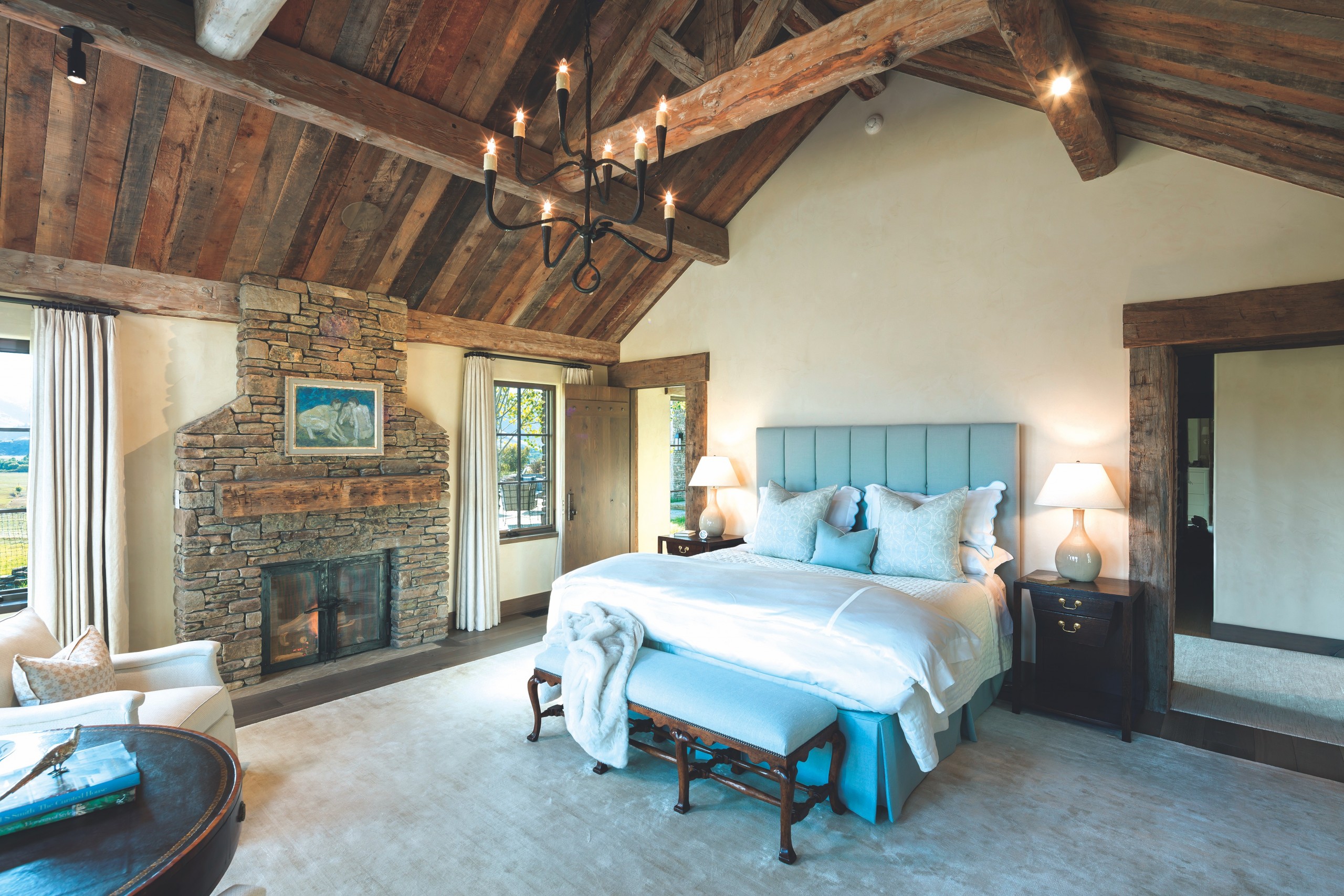 Dreamy views and beautiful furnishings make for a restorative retreat. The custom headboard upholstered in Holland & Sherry twill fabric, Holland MacRae side tables, a Formations bench and a chandelier by Gregorius Pineo all contribute to the calming ambience

She also put a nature-based palette in place. “There’s variety in the colors, but it’s subtle,” she says. “It brings a feeling of calm and oneness with nature here. We’re not fighting it; we’re putting ourselves in it.”

Now that the country has finally begun to return to normal, the homeowner says she and her husband are “remembering” how to host again. The homestead is more than ready. 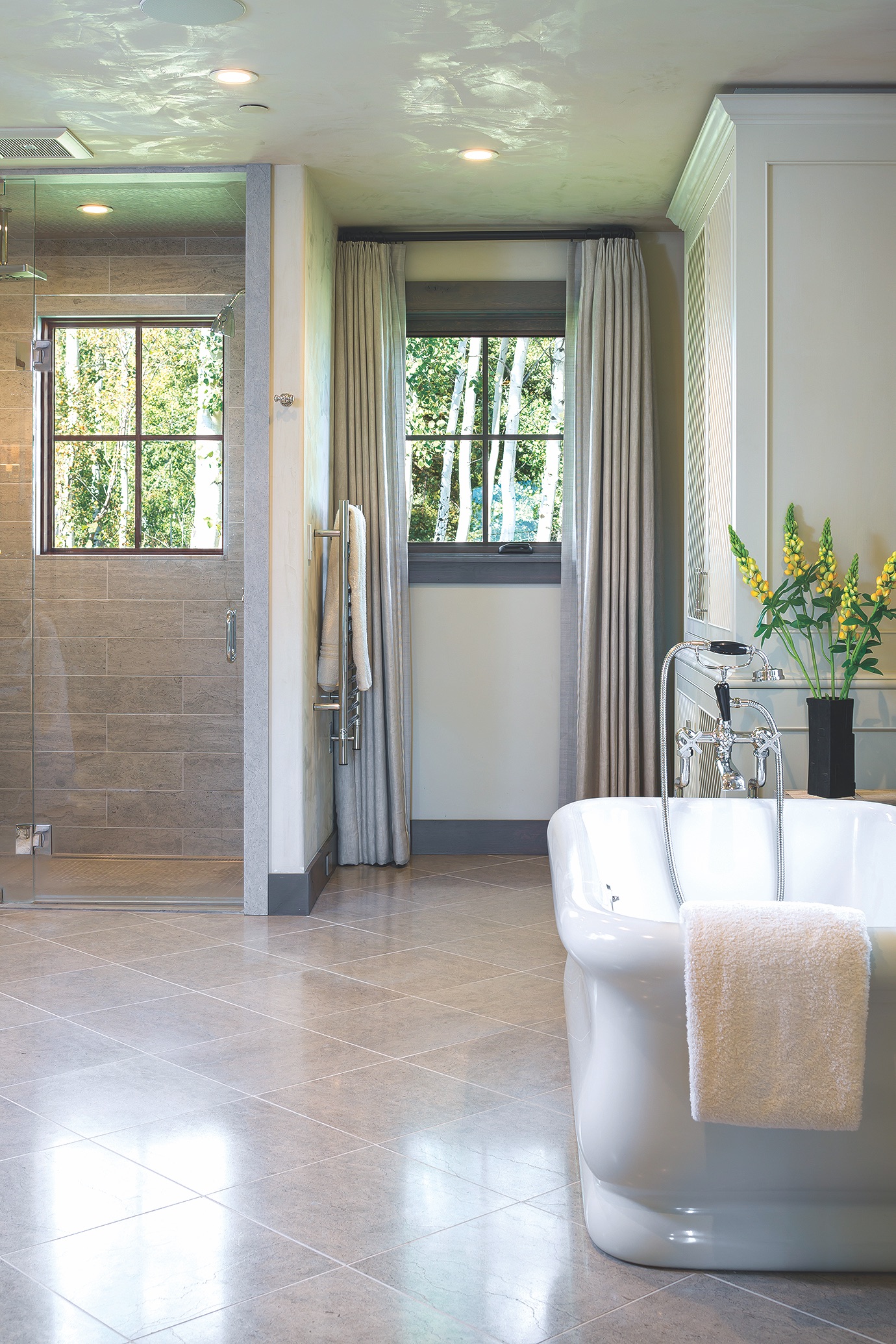 The homeowners enjoy bathing in plenty of natural light while soaking in a rectangular freestanding tub by Waterworks.

In addition to two guesthouses, the property features a large entry with a fully stocked bar and gracious living spaces that offer visitors breathtaking views of the Tetons.

“Whether there are two people sitting by the fire or there’s a gathering of 10 to 12 people assembled for a dinner party, this house is so comfortable,” says Schwab. “This is a couple that loves good food and great wine and sharing their home. The entertaining that happens here is on par with the design.

From Dark and Dated to Light, Bright and Modern in Montana