An Old-Fashioned Cabin in Pagosa Springs

Handcrafted finishes—with all the comforts of a modern home 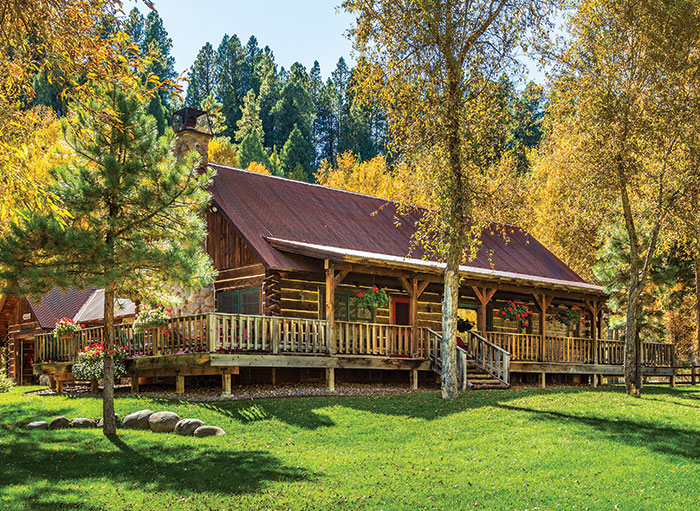 eventeen years ago, Texas residents Mark and Phyllis Young embarked on an extensive tour of southern Colorado in search of the ideal mountain property—one where they could escape the summer heat, indulge their passion for fly-fishing, ride their Missouri Fox Trotters and spend quality time with their two adult children and grandchildren. In late 2005, they finally discovered a 70-acre parcel near Pagosa Springs that fulfilled all their requirements. Only four miles from town, the property had live water with a fishery, plenty of trees and open space. Best of all, it backed to the San Juan National Forest.

Their initial plan was to build a small, rustic guest cabin where they could live while the main home was under construction. “We wanted people to say ‘Gosh, how long has that been there?’” Mark Young explains. After meeting contractor Mike Moore, the couple knew they had found the right person for the job.

“He is a stickler for detail, from the large steps all the way down to the small steps,” says Young. “The trim, the doors, they’re all handmade. He’d researched hardware and backsplashes to try to keep things true to the period we wanted.”

The finished log cabin measures just 1,500 square feet, with a master bedroom on the ground floor and a second-story office and sleeping loft for grandchildren. A small wing housing the utilities and an “outhouse bathroom” (with a tin ceiling and a sink made from a bucket) was designed to look like a vintage add-on. A covered porch extends the living space while offering broad views of open grounds that lead to Fourmile Creek. The naturally tapering timbers with their dovetailed joints attest to the cabin’s handmade quality. 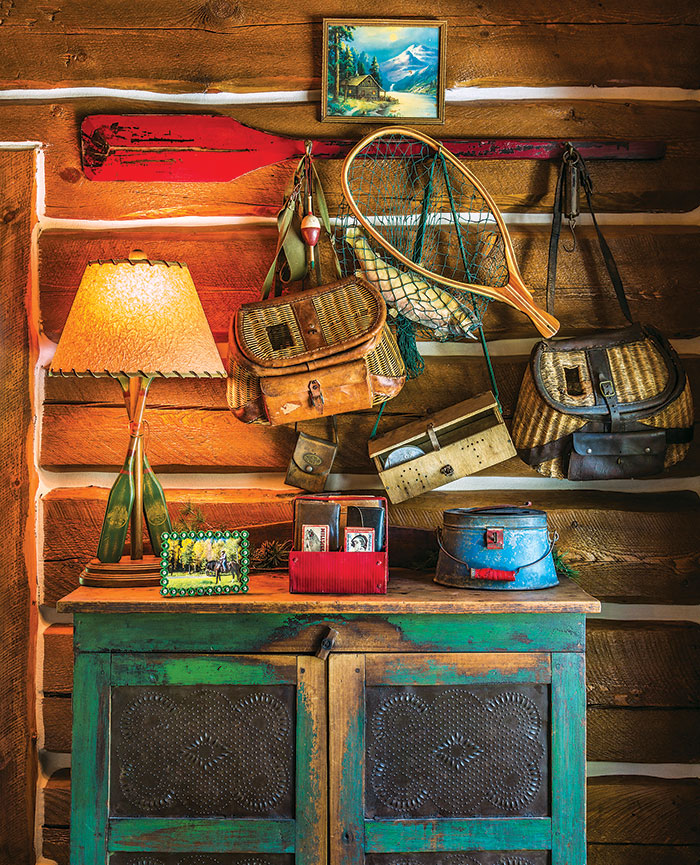 Carefully chosen materials lend period charm. Timbers were crafted from standing dead lodgepole pine, reclaimed circular-sawn wood trim (“They don’t mill it like that anymore,” says contractor Moore) was constructed with shoulder joints, reclaimed oak flooring reveals old nail holes, misshapen balusters were fashioned from leftover material, and a cold-rolled steel roof is intended to rust. “We used river rocks from the creek around the base of the cabin,” Moore adds. “We wanted it to feel like an old homesteader had built it.” 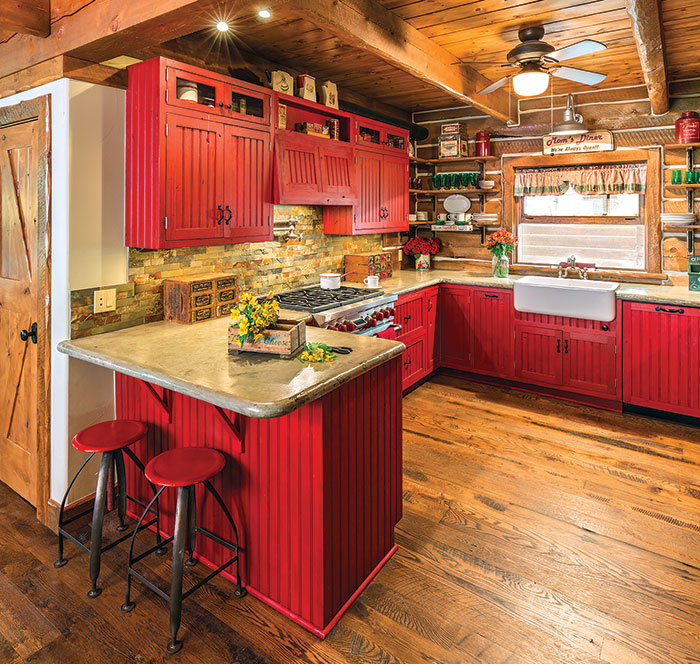 The kitchen cabinets, designed by Moore, were made by a local craftsman of Musgrove Fine Woodworking and wire-brushed for texture. “If you touch something, you want it to mean something,” he explains. “Same thing with the trim. We have never repeated the same thing, and I’ve been doing it for 40 years.” 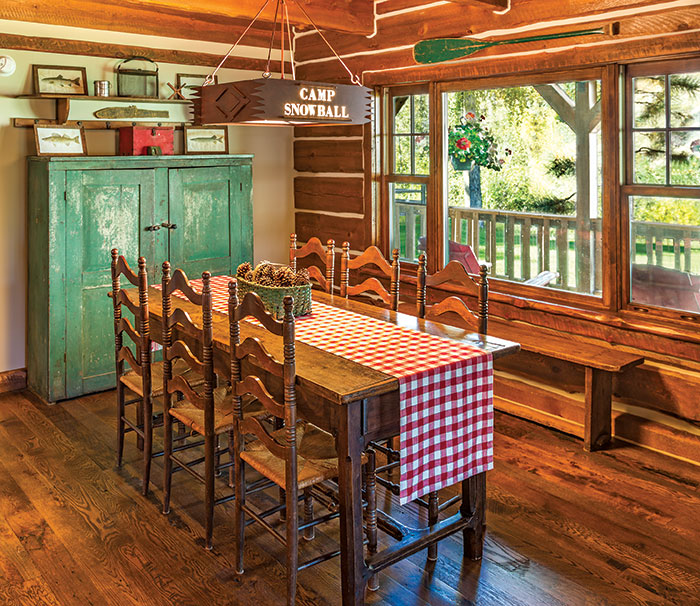 The home’s interior spaces were enhanced by Phyllis Young, whose longtime passion for antiques served her well on this rustic project. Her original focus in collecting was fine antiques, but soon she gravitated to American, English and French primitives.  “They have to be well worn for me. My brother says my decorating style is ‘Chip and Dent,’” she laughs. “I call it ‘furniture with character.’” For the Adirondack-influenced rooms, Young picked her colors—green and red, primarily—and purchased items that proudly showed their age, the more weathered the better. 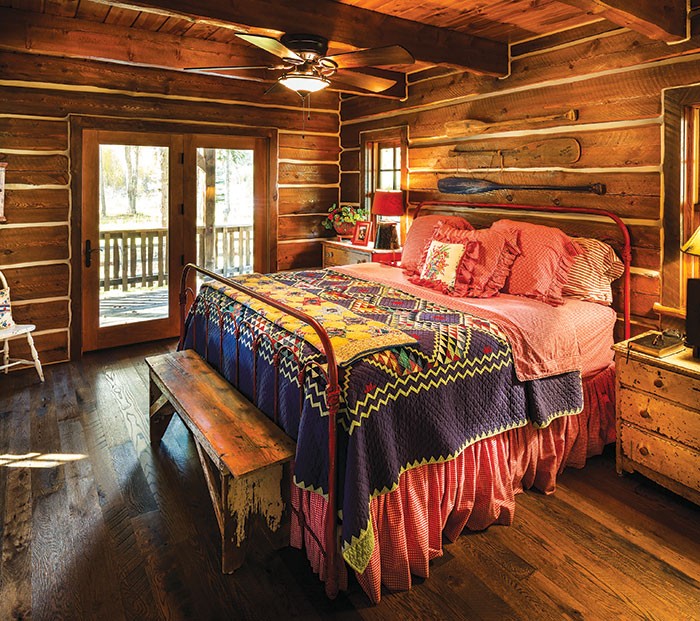 Over time, the dovetailed log cabin has become all the home the Youngs needed. So much so, in fact, that the family scrapped their initial plans for a main house, opting instead to build a small cabin for visitors. “This was the place I was looking for when we originally came to Colorado,” admits Mark Young.

And, at the end of the trail, when the Youngs return to camp, their little cabin in the woods reflects the way they have come to feel: like they belong.

TIPS ON ANTIQUING
Phyllis Young first knew she was smitten when her grandmother bequeathed her a drop-front secretary desk with a small built-in bookcase and matching chair. Since then, she has learned a lot about collecting:

Do your homework: Experience is the best education of all. When Young once worked in an antiques mall, “I learned what’s antique and what’s a reproduction, and I learned what I like and don’t like.”

Make friends: Develop relationships with dealers, who are able to spend much more time scouting and cover much more territory than you are. If they know your aesthetic and are aware of your needs, they can save you a lot of time.

Sharpen your eye: Create a sense of what’s authentic. There are a few telltale things to look for, says Young. “If you see a piece that appears several different places, it’s new. Look on the inside and at the back to see if it’s worn. If there’s dovetailing, generally it’s old. If you see several layers of paint, generally it’s old.” Finally, she suggests, “Ask the person in the store. Usually they’ll tell you the truth.”

Take a risk: Don’t be afraid to purchase imperfect pieces that can be repaired or repurposed. Young doesn’t like antique beds but will sometimes have a bed made of old materials.

And Young’s most important piece of advice is also the simplest: “When you find a good antique, you have to go ahead and buy it.”