A Montana homeowner traded the family farmhouse for a right-sized, in-town residence that’s all her very own 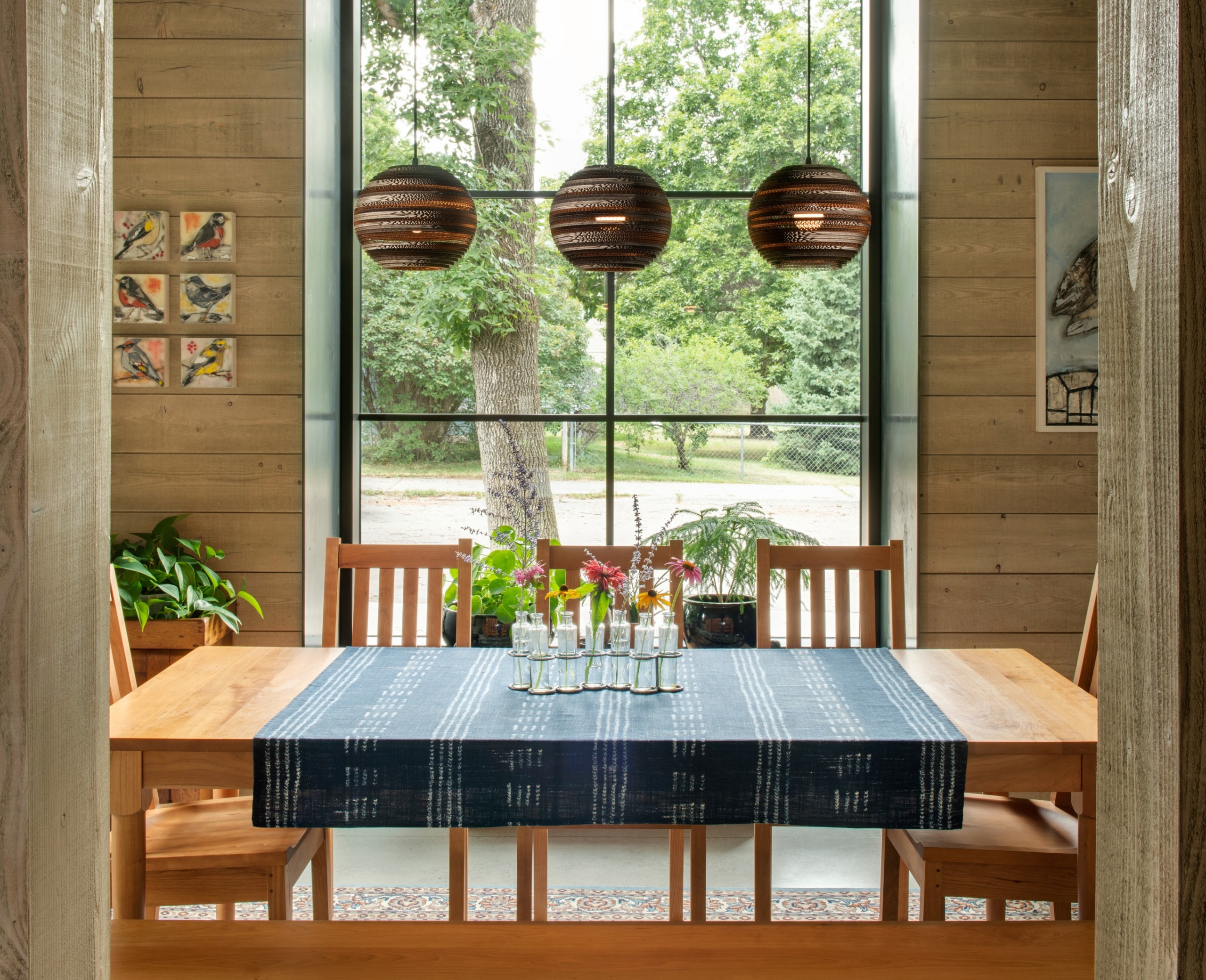 After raising two boys in a rambling farmhouse on a 20-acre expanse, Robin Patterson was looking for a different kind of Montana experience—as in that of an empty nester. “When my younger son left, I felt the isolation,” says Patterson. “I thought it might be time to bust a move and make a big life change.” 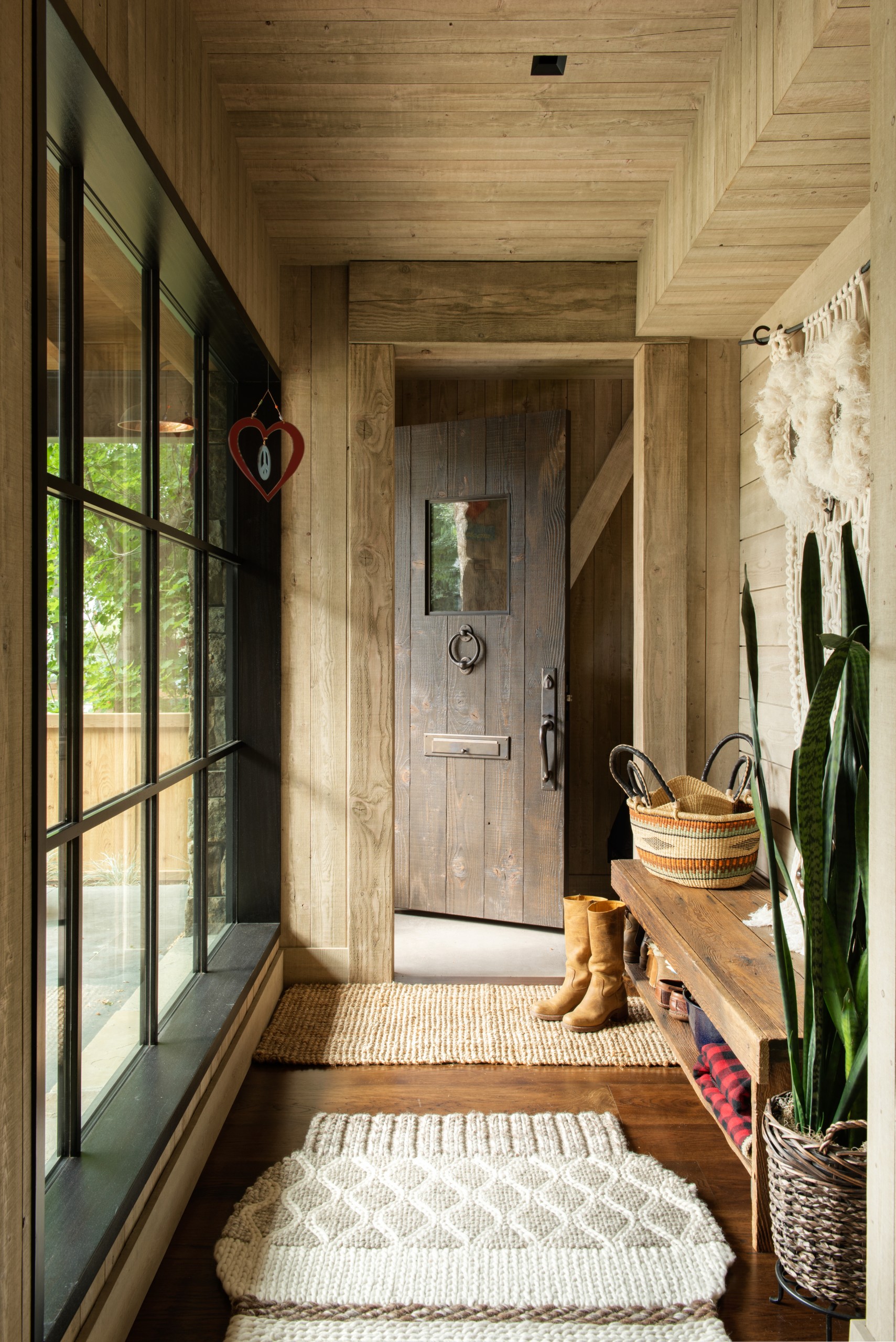 The entry is intimate by design thanks to corral-board walls, a scaled-down ceiling, built-in bench and giant picture window. “When people stop by, it feels very purposeful,” says the architect.

Turns out, that big change became all about scaling down. Patterson swapped wide-open spaces for a small lot wedged between two houses near downtown Bozeman, and she began planning for a “forever” home that was open and airy, low maintenance and a little unconventional. “It was in my mind that I will be here for the rest of my life, so designing for resale wasn’t a priority.”

The wide-open kitchen affords plenty of space for cooking, an abundance of oak cabinets topped with leathered granite and open shelving for Patterson’s collections. “I love that Jeff had the idea to put personal items in the kitchen,” she says.

Once the right location was secured, it became time to assemble a team that could make her visions of a dream house into a reality, and she took the job seriously. “It’s very personal,” she says. “These people were tasked with translating my ideas into something I was going to live in every day.” Luckily, she already had a key person in mind—Bozeman-based architect Jeff Lusin of 45 Architecture—whom she knew after serving on the board of a local nonprofit together. “I liked that he was young and excited about everything. He’s so skilled,” she says. “He has so much talent, and he’s such a great listener and communicator.” 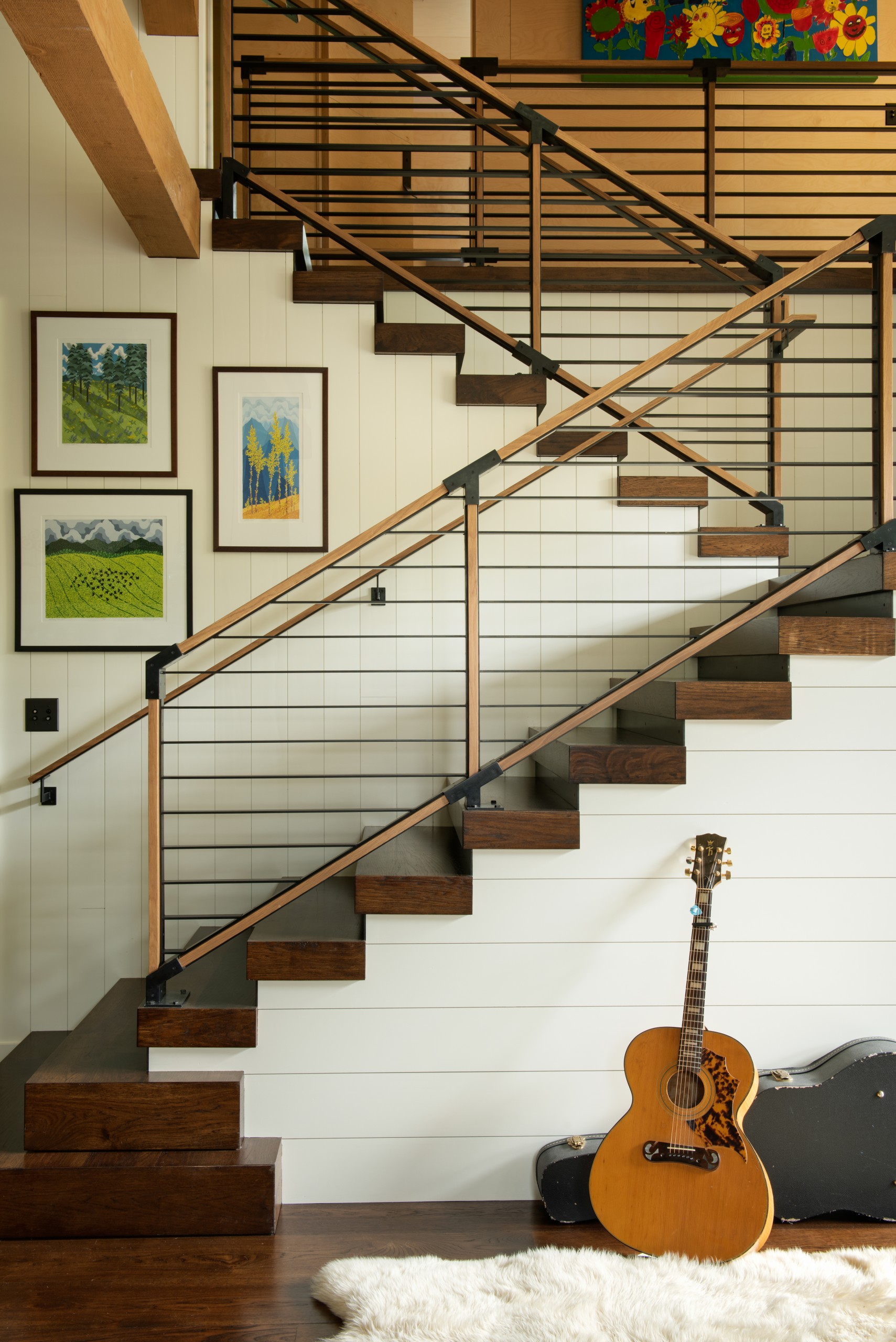 Together, Patterson and Lusin—along with builder Dennis Steinhauer and a slew of local craftspeople and carpenters— spent the next two years creating an in-town oasis that’s right at home in the funky neighborhood but also unique to the woman who lives there. The architect spent hours alone on figuring out the right transition from the front porch to the front door, trying to balance privacy with a sense of discovery for guests and passersby. “The minute you step off the sidewalk, it feels like it’s her property,” says Lusin. “You immediately feel invited.” 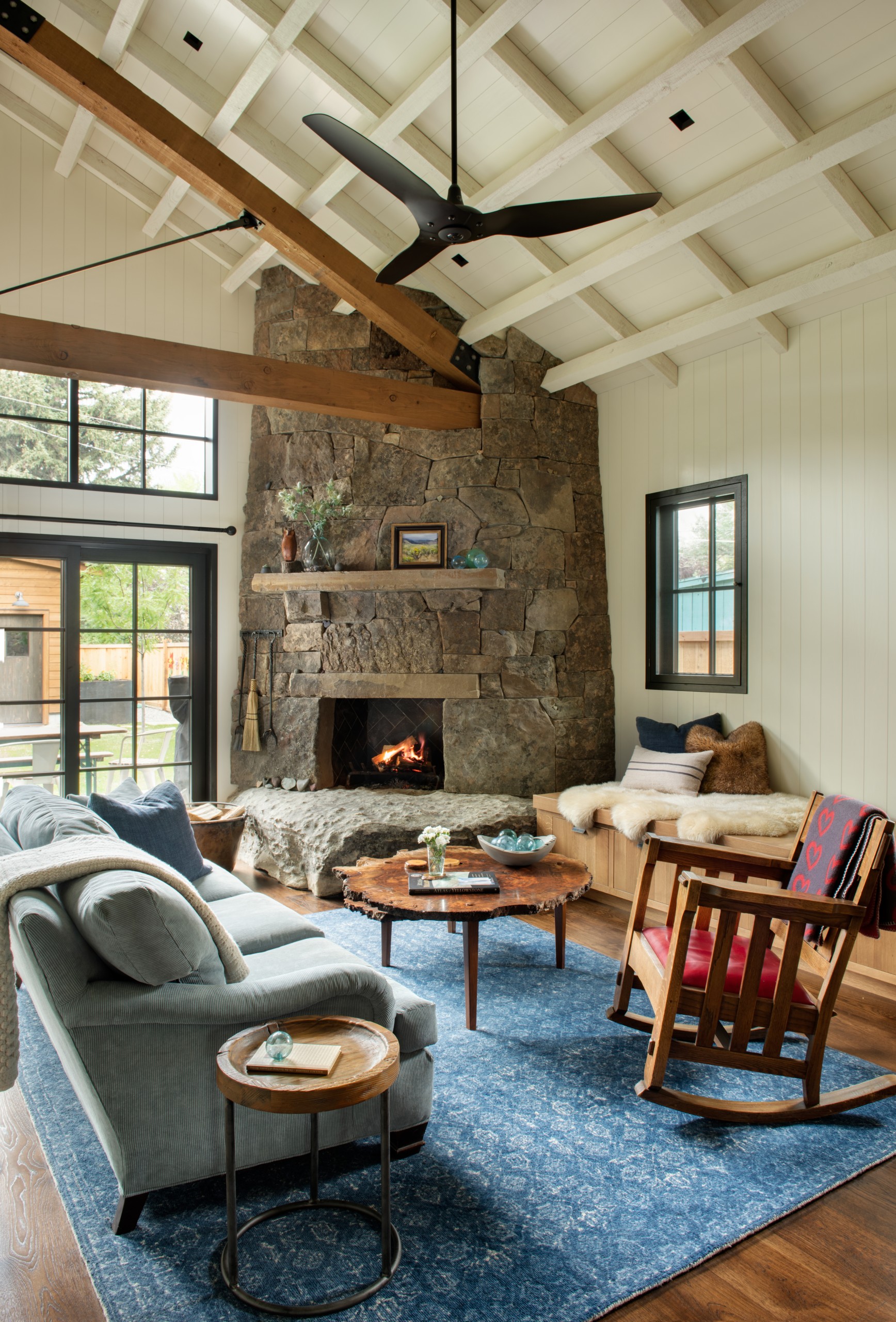 The warmth continues inside the three-bedroom, two-and-a- half-bath home, where light abounds, cross-braced ceilings soar and wooded walls beckon. “It’s not an expansive house—it’s not even 3,000 square feet—so it’s very intimate,” says Lusin. “We had to figure out how to give each room its own identity without getting a Pinterest effect. It can be tricky to fit all the good ideas in one house.” 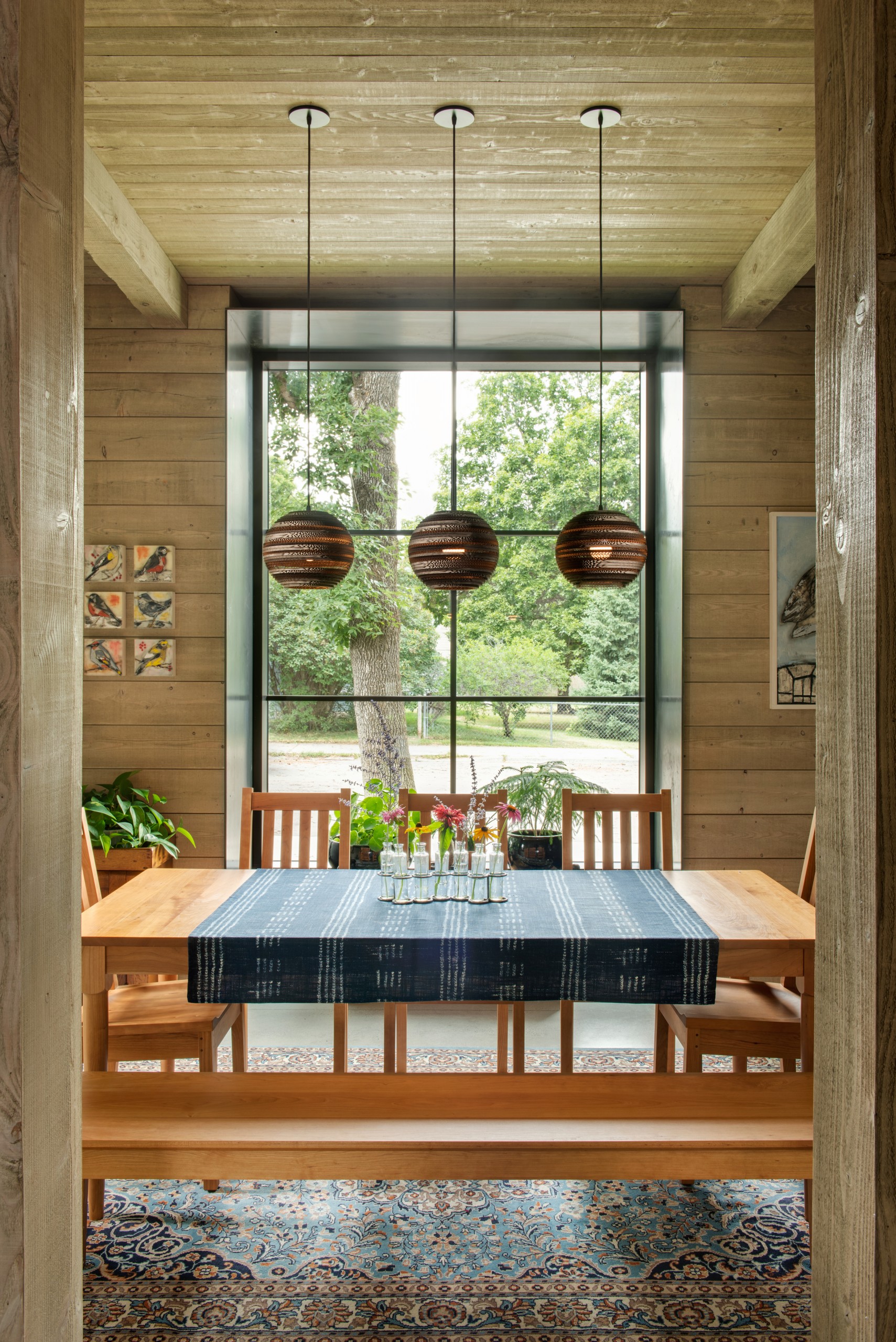 Friends and family gather around the cherry table and chairs in the dining room.

The architect credits careful planning and thoughtful collaboration for the success. “Robin was unique in that she really wanted to be engaged and figure out how things go together,” says Lusin. Adds Steinhauer, “Every surface has some thought behind it. There are so many different wall finishes—Robin put the work into making decisions. They were all great.” 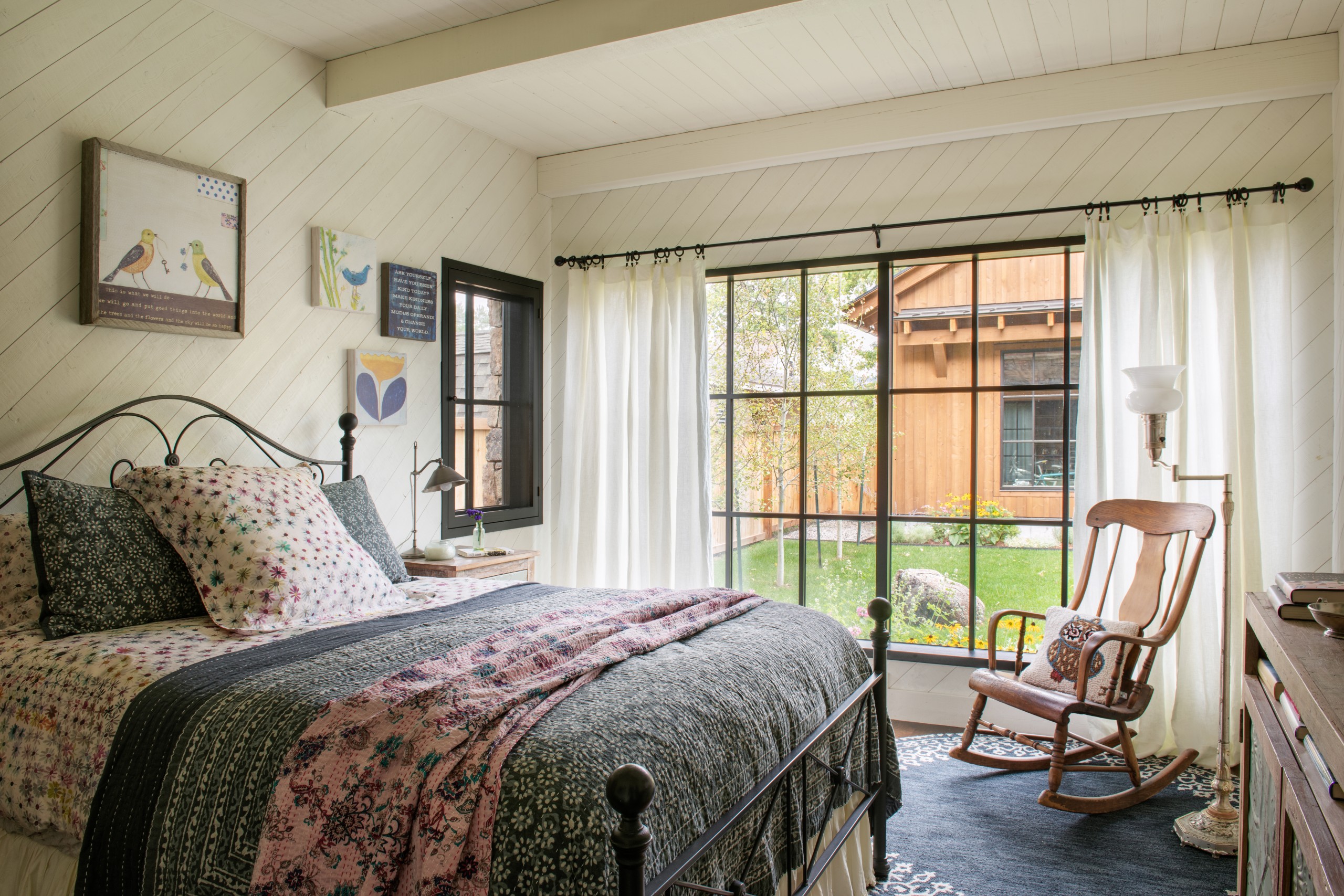 The master bedroom, awash in painted poplar, is home to an iron bed frame and a mix of artwork. 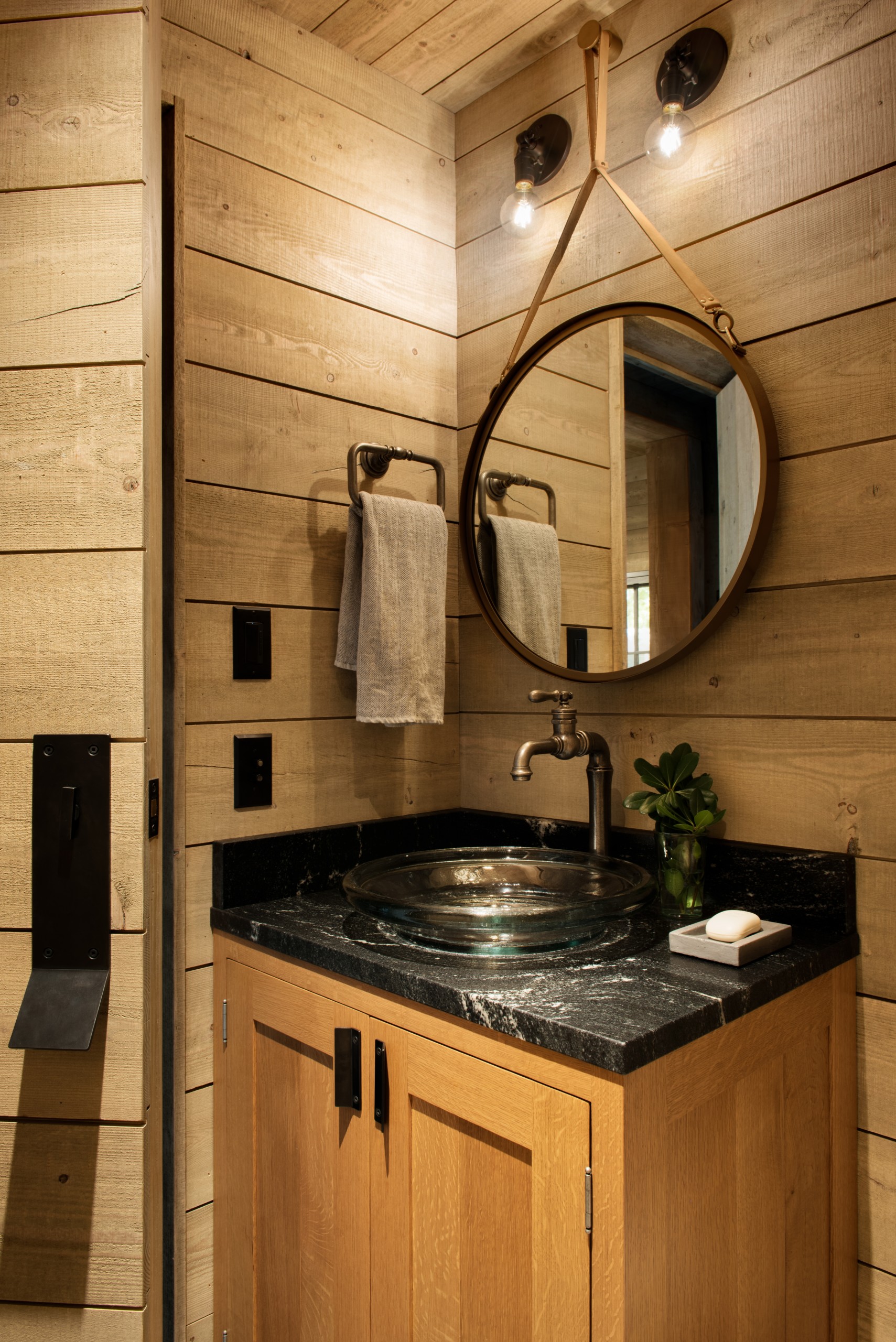 Fir boards and a mirror from West Elm come together on the walls of a half bath.

Now that Patterson is settled in her space, she’s hard-pressed to name her favorite spot. When she’s doing yoga in her upstairs nook, basking in infused light and taking in the view of the Bridgers, she feels at peace. “But then I sit in the front room and watch people walk by and wave, it’s a welcome connection to the world,” she says. 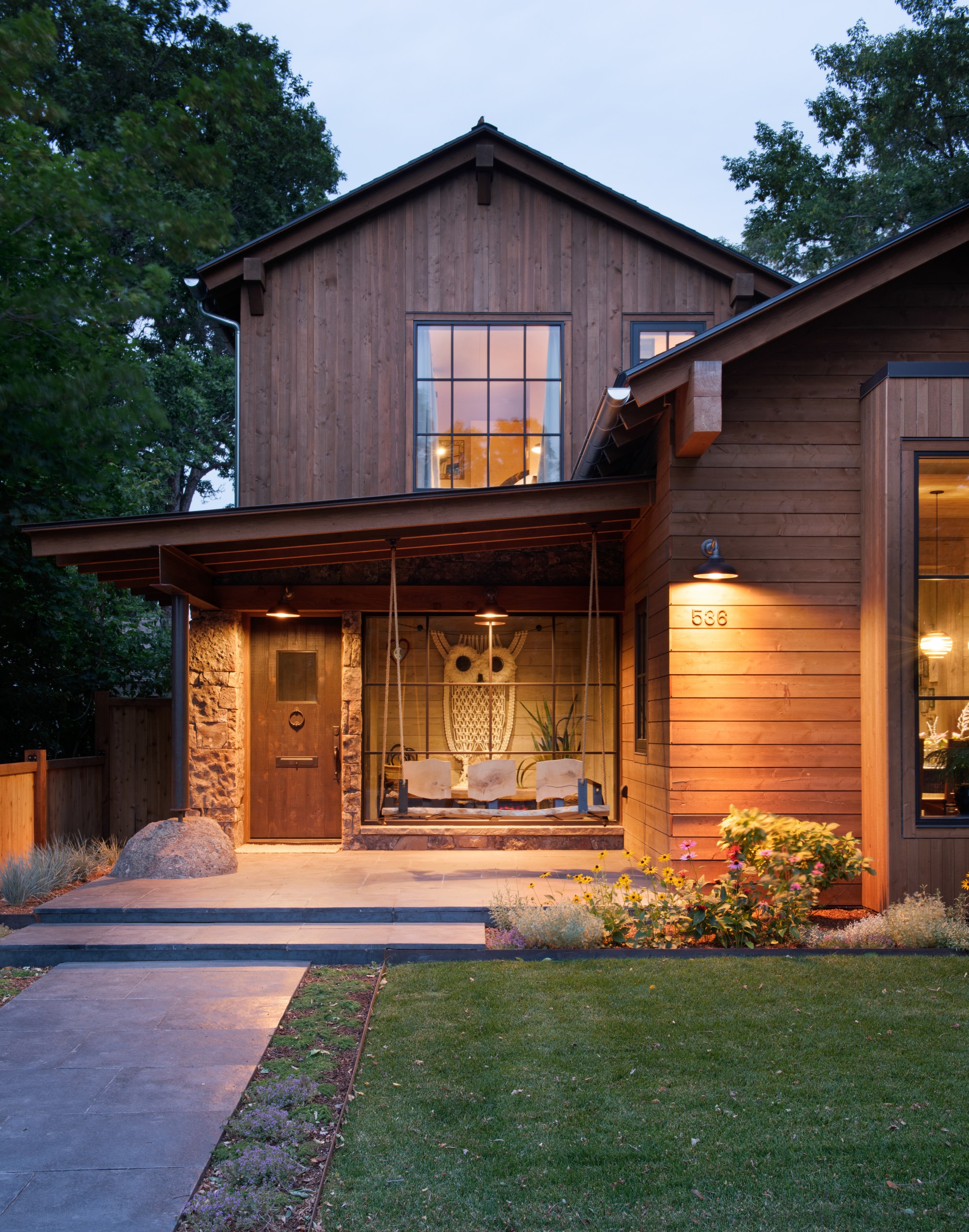 The architecture, porch swing and macrame owl are definite attention getters. “People stop by all the time to say, ‘This is the most beautiful house,’” says Patterson.

One thing that never changes: Her gratitude for the people who made it all possible. (“Robin knew everyone’s name on that job site,” notes Lusin.) Says Patterson, “Even though this house is all about fun, I got to work with these young, talented people, and it was a grounding experience during a big life transition.” 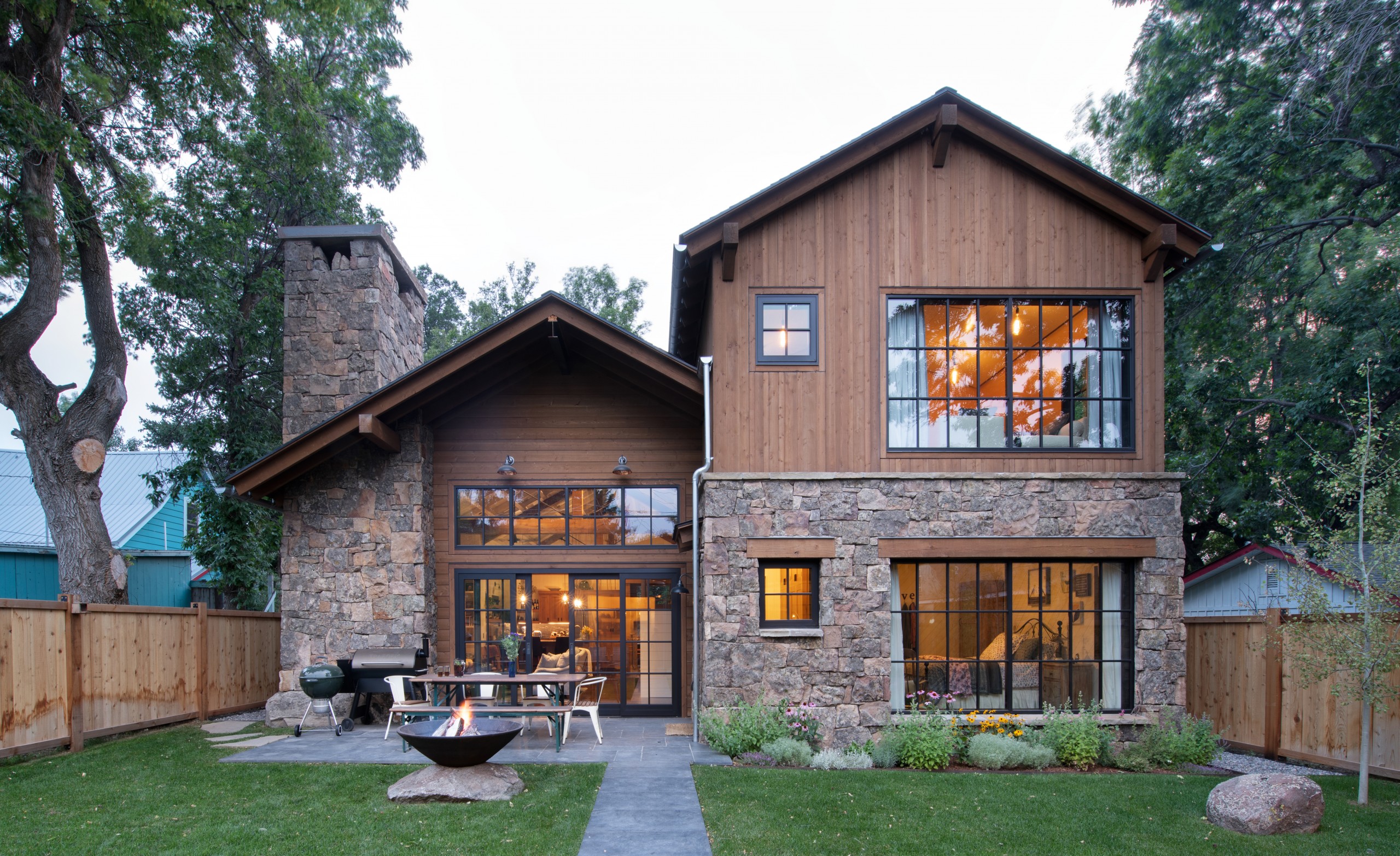 No wasted space here! Architect Jeffrey Lusin and his client Robin Patterson worked together to create lots of interesting reasons for friends and family to look up.

TAKE IN YOUR SURROUNDINGS Because Patterson wanted the great room to be both open and intimate, Lusin had an idea to do something extra special with the beam work. He opted for purlins that are cross bracing. “It’s rustic, and the sizing came from mountain architecture mixed with my background in Hawaiian architecture. It’s special but not overly done,” says Lusin. CONSIDER THE LIGHT Think about how natural light will affect your design up above. As the Montana light changes throughout the course of the day, different patterns emerge as parts of the ceiling are spotlighted while others are shadowed. Says Patterson, “I could just lie on the floor and look at it for hours; it has a meditative quality.” MAKE IT WORK While the duo opted to use wood for ceilings in other rooms—and wallpaper or paint is certainly a fast and easy option to add a pop of fun up top—the homeowner wanted something that was less purely ornamental and more structural for the great room. The sturdiness has come with a couple of unexpected perks. “It’s climb- able,” Patterson says. “When my sons visit, they like to get up to it from the stairs. They’ve even hung a hammock up there!”

A Carriage House Transformed into a Cozy Retreat