The house is dwarfed by its forest surroundings and anchored to its site on the edge of a pond by massive stone chimneys and the timeless solidity of heavy timbers.

It is designed to blend in and to speak to its surroundings—certainly an appropriate response to the outsized grandeur of its setting near the Snake River in Jackson Hole. Its interiors, though, vie with the Tetons for their ability to stop motion. An expression of the long-standing vision of two collectors, here a unique cache of one-of-a-kind treasures is displayed in a home whose honesty in construction is equaled by the authenticity of its artworks.

The homeowners, according to Los Angeles–based interior designer Elizabeth Dinkel, are both passionate collectors. An entertainment lawyer married to an actress, the couple had lived in another home in Wyoming and already owned a trove of museum-quality Native American artifacts—including vessels, beadwork, clothing, good luck charms, blankets and instruments—before beginning the design of this house. Their interests spanned worlds. The actress, for instance, was a connoisseur of majolica, while the husband was drawn to prehistoric pottery. He, a fisherman, collected antique creels, while she, with her interest in design and color, collected textiles. Together they were drawn to truly special finds, such as a Joseph Heinrich Arts & Crafts–era presentation silver punch bowl with bronze Indian heads; an antique railroad model; and Tiffany stained-glass windows. In their new home, a perfectly preserved 1930s Old Town canoe hangs from the ceiling in an upstairs gallery.

Without a doubt, the heart of the home is its barrel-vaulted great room and, anchoring it, a massive totem pole that speaks of another world. The 26-foot-tall hand-carved artwork, circa 1880, of the Haida tribe is just one of many museum-quality pieces on display. Terry Winchell, owner of Fighting Bear Antiques in Jackson Hole, was involved with the project from its inception and had advised the homeowners prior to that. Winchell and Dinkel both describe a process in which the home was designed to accommodate the owners’ collection. The totem pole, given its height, weight and consequent engineering issues, constituted the most significant challenge. It was worth every effort, asserts Winchell, for its impact is immeasurable. “That totem pole has had another life,” he says. “It lay in the basement of a museum in Boston for 90 years with water dripping on it. It’s the real thing, and it sets the tone when you walk in. Very few early totems have survived. It defines a collection when someone has a focal point like that.”

Stephen Tobler, a Portland, Oregon, architect previously based in Jackson Hole, designed the home that would showcase these spectacular artifacts. He was able to balance the vision of the clients and the complexities of their art collection with the unique demands of the area, such as topography, wildlife and winter snow loads. “Originally, the owners were envisioning a more modernist twist on a ranch-influenced structure,” Tobler recalls, “for instance, large panes of glass with no mullions, to open up the view. Their reaction was to try to get more exterior exposure into the house, but sometimes the quality of space in these cozy cabins with a womb-like atmosphere becomes desirable. Initially they wanted clean, modern lines, but they also wanted it to be of the West.” Thus, over multiple design iterations the house evolved into a more ranch-influenced design with a vintage feel.

Traditional rustic architecture carries with it its own set of constraints, such as smaller apertures, which result in less natural light. The question for the architect became how to maintain the quality of the space while maximizing light, and how to accommodate the needs of the clients while mitigating the volume of a larger home. The house was constructed using post-and-beam construction and boasts unusual double-height vaulted-ceiling rooms built using ship-construction techniques. The steel strapping is both functional and traditional; it has a long history, dating back to Amish barns and shipbuilding. Visually, it speaks to authenticity. Says Tobler, “There was rigor on our part for finding historic precedent, but rather than just copy we would say, ‘Where would we go with this as a next step?’ Historically, glass was scarce and apertures were small for both structural and practical reasons. But jump 100 years and people want modern kitchens and beautiful views. There are things we have to do, such as add steel, to make it all work. Yet we still have the romantic view of a little Western cabin.”

Fortuitously, the result is not only site-appropriate and very functional but also extremely conducive to displaying the owners’ art. The home has the feel of a traditional log house. Wood walls create a dignified backdrop for the Native American pieces, while the bright colors of the beadwork stand out against the more somber tones of the house. In some key wall spaces, such as the kitchen, the owners selected rich colors to create vibrancy and to offset the preponderance of wood.

Dinkel says the ultimate result was the product of close collaboration between the clients, Tobler and herself. The building team at Ankeny Construction Management was invaluable, as was expertise lent by the mechanical engineers, the property’s caretaker and rustic antiques expert Winchell. “The home is in the woods, tucked away and built on a pond, where it blends into the natural environment. The clients wanted a backdrop to showcase their collections, they wanted to feature the natural environment and they wanted something apropos to where they live in Wyoming,” Dinkel explains. “The architecture speaks to local traditions without having all the expected elements.”

Tobler says his task was to create an appropriate showcase for the art while creating some consistency of detailing so the design would hold up over time. In this respect, as in so many others, the home is an unqualified success. But form and function have to work together, and for Winchell, a home is only as good as its components. To him, the monumental totem pole—anchoring the house, as the Grand Teton anchors the nearby mountain range—makes the grandest statement where it stands, at the heart of the home and as a testament to its authenticity. 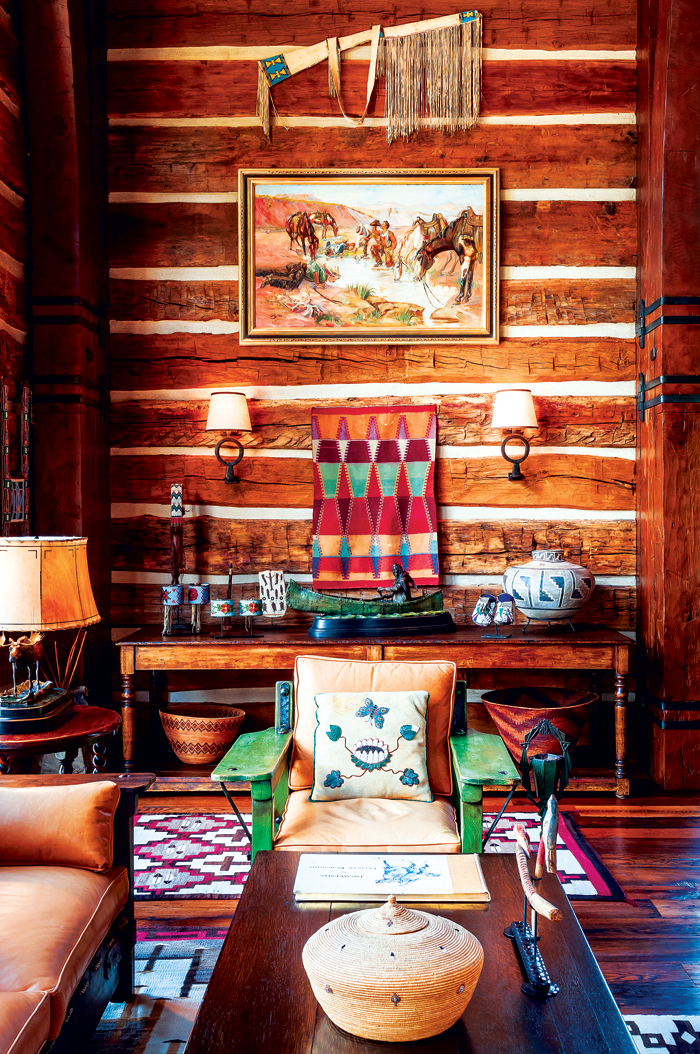 A traditional post-and-beam home near the Snake River and Teton Mountains marries form and function as a repository for an extraordinary collection of Western art and antiques and Native American artifacts. 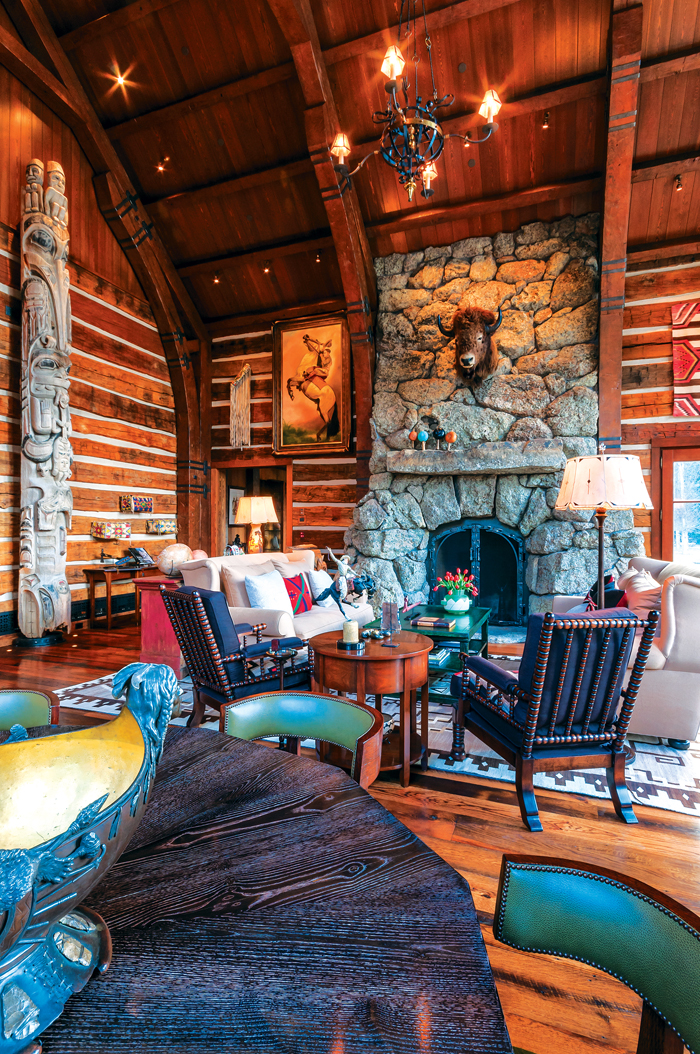 Anchoring the great room is a 26-foot-tall hand-carved totem pole, circa 1880, of the Haida tribe. 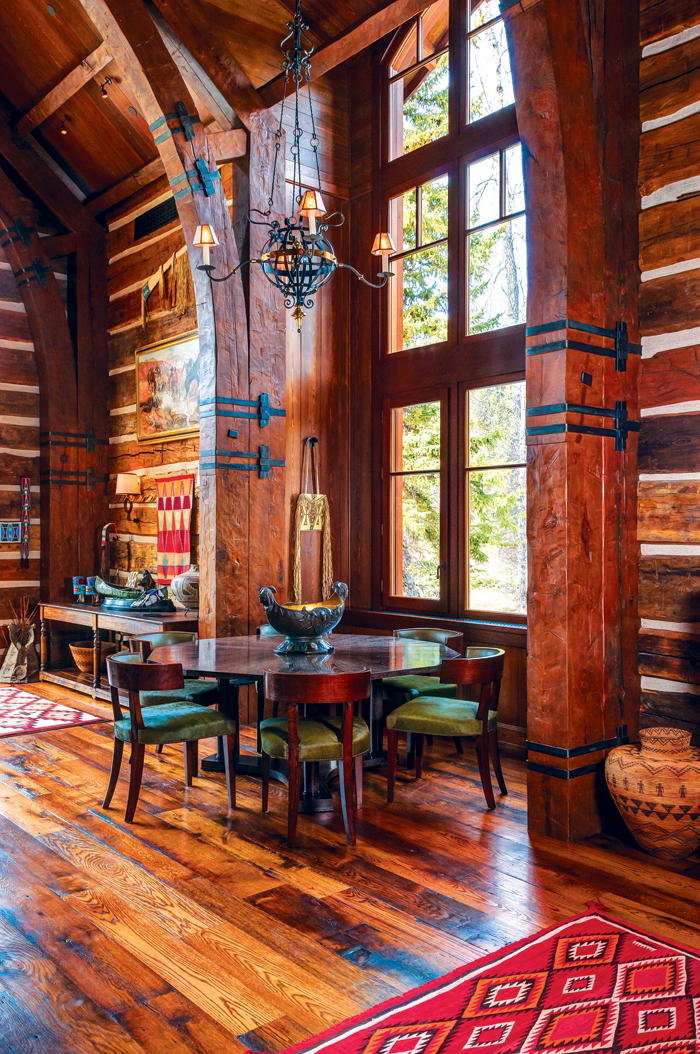 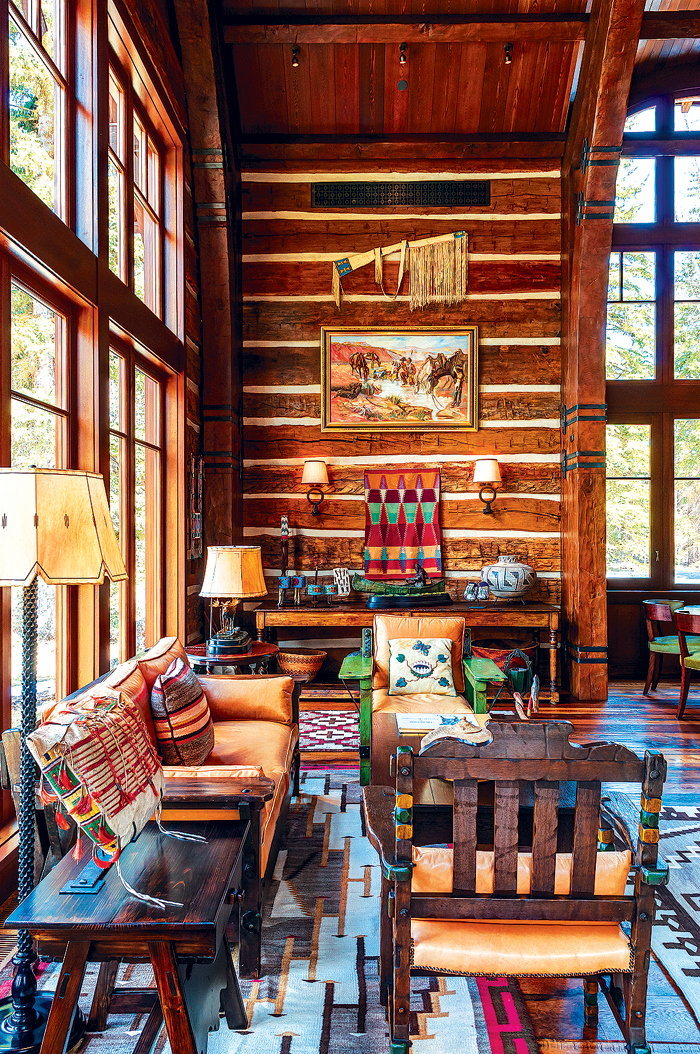 The great room, with its prominent structural timbers accented with iron strapping, is a showcase of museum-quality furniture, art, saddles, pottery, textiles and Native American artifacts. The strapping, which has a long history dating back to Amish barns and shipbuilding, is both functional and traditional. 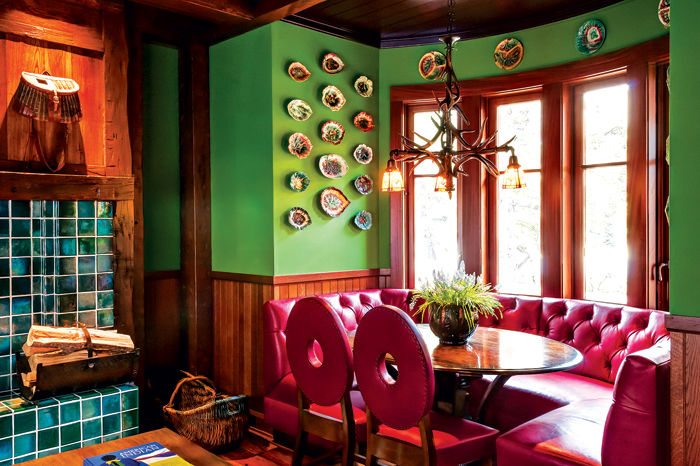 In the breakfast nook, the owner’s collection of majolica stands out against a deep green wall; a red leather banquette and custom hand-glazed Ann Sacks tiles around the fireplace create a cozy feel. 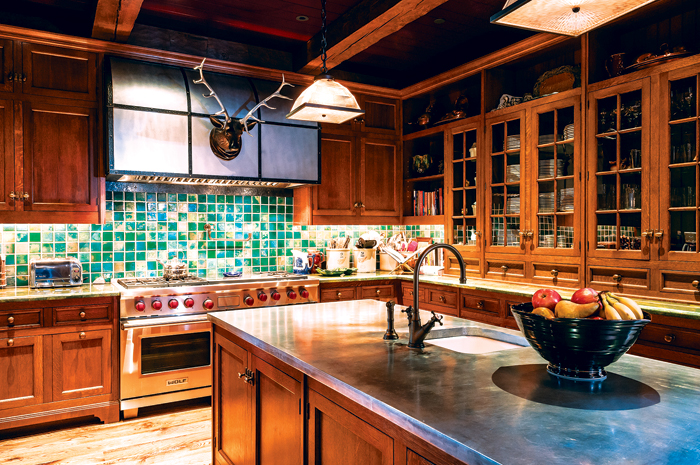 The kitchen, with glass cabinets from Christopher Peacock, variegated green tile backsplash and playful elk “mount,” was built to accommodate a crowd. 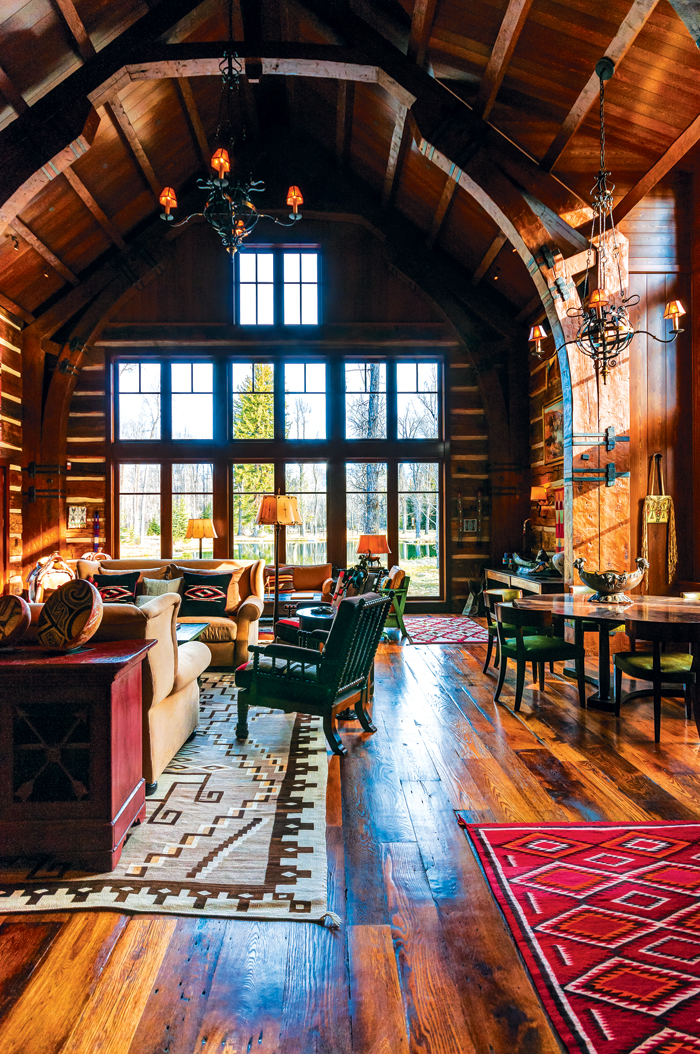 “The home is in the woods, tucked away and built on a pond, where it blends into the natural environment,” explains interior designer Elizabeth Dinkel. 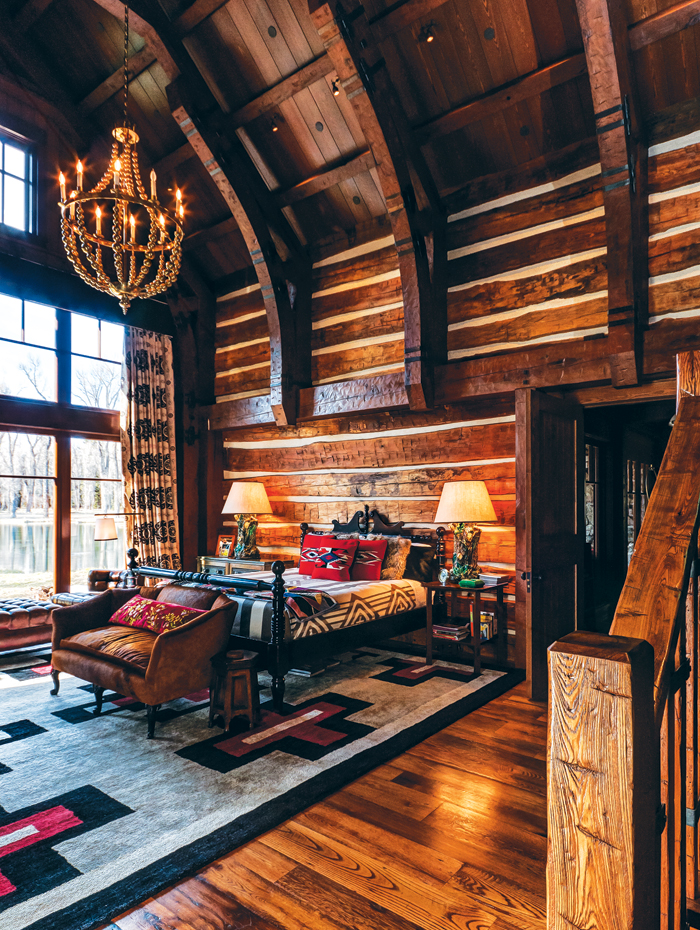 The double-height master bedroom utilized shipbuilding techniques in the construction of the ceiling. 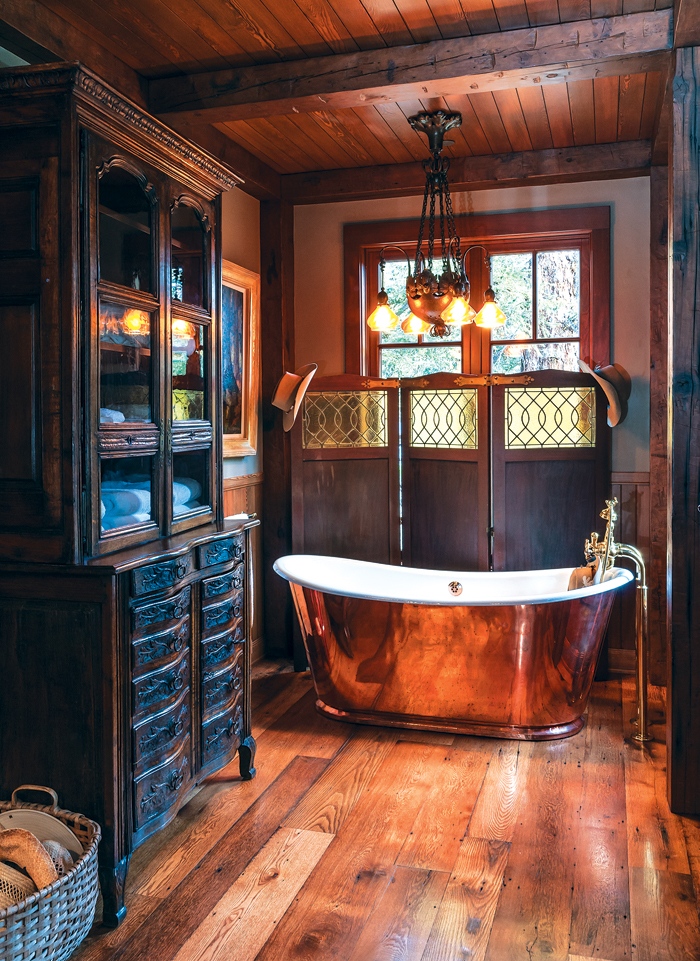 In the master bedroom, the green wall creates a foundation for the vibrant colors found in Native American artifacts. 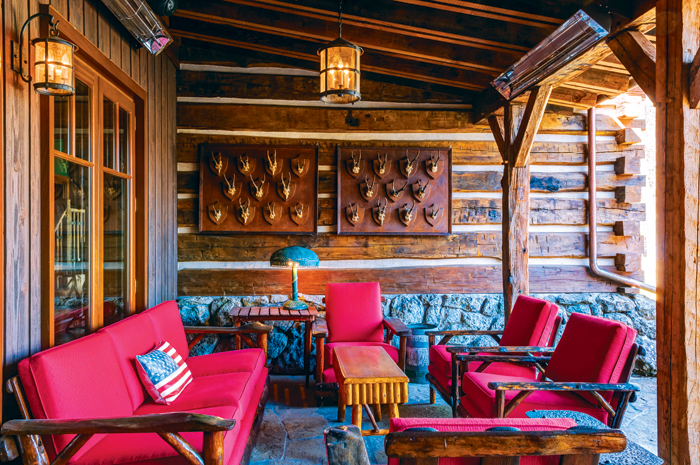 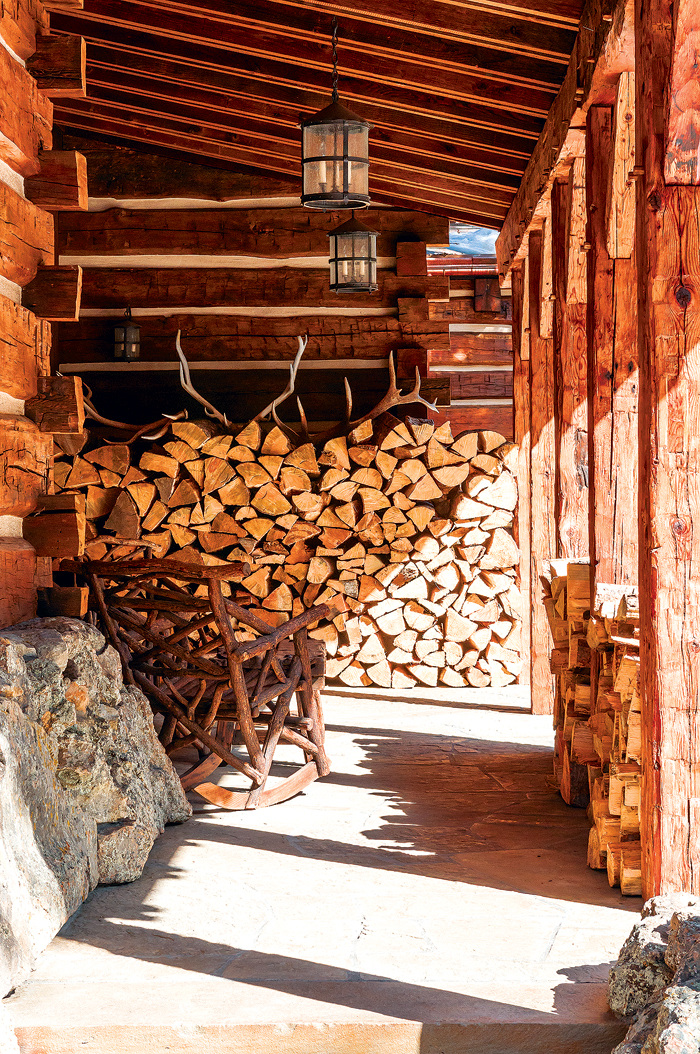 The home has the feel of a traditional log house. 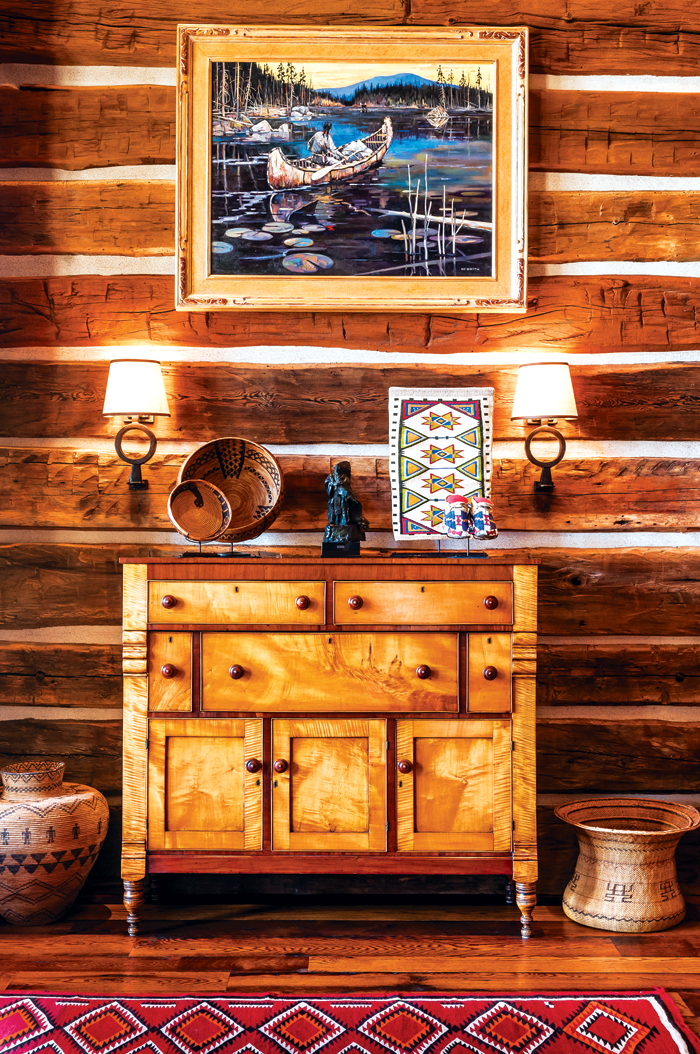 French wrought-iron sconces cast a warm glow over an 1880s French fruitwood cabinet. The homeowners collected the vintage Native American baskets and textiles over a long period of time. 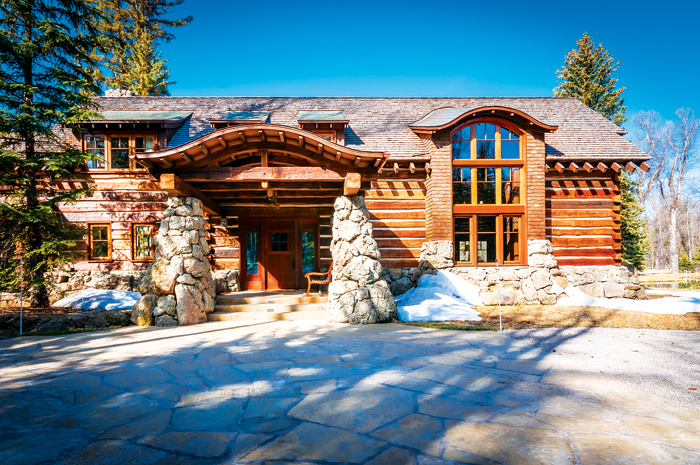 Anchored to its site on the edge of a pond by massive stone chimneys and the timeless solidity of heavy timbers, the house is designed to blend in and to speak to its surroundings. 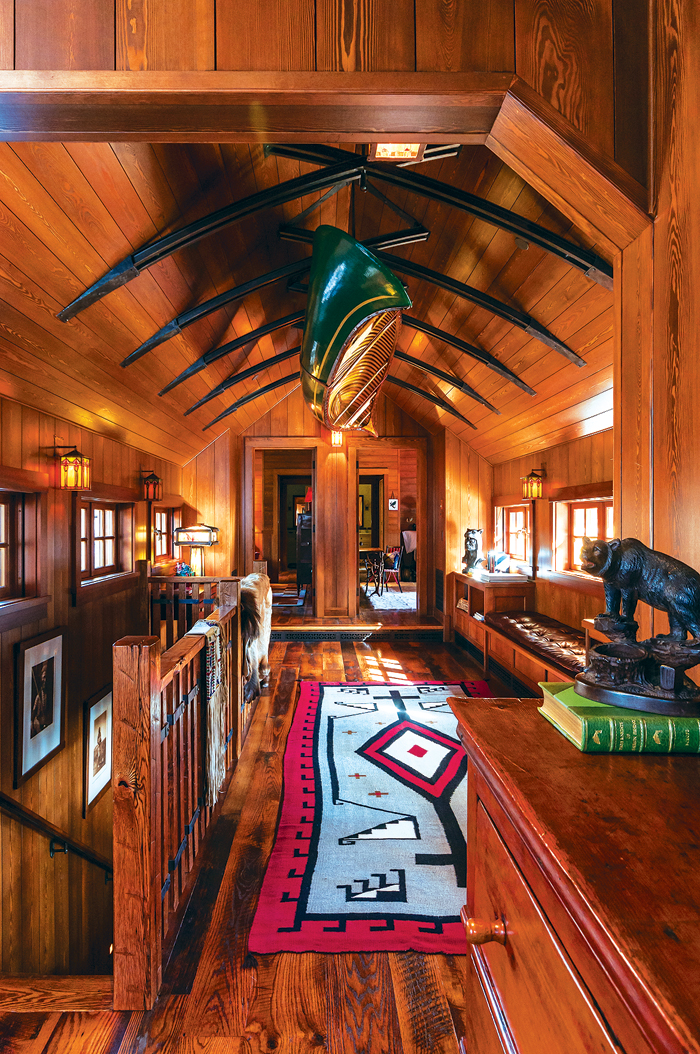 Excerpted from “American Rustic” by Chase Reynolds Ewald, with photography by Audrey Hall. Reprinted with permission of Gibbs Smith.