A home inspired by the look of old-world towns

A visitor glimpsing the house at Jigsaw Ranch just outside of Aspen, Colorado, might think it was a small town clinging to the hillside.

Composed of varying geometric forms, the sprawling residence looks at first like a village of structures, each a different size and shape, built close together over time. But that apparent randomness had nothing to do with chance.

“We wanted a contemporary mountain home that looked like a collection of buildings rather than one large house,” homeowner Mark Rosenthal explains. Mark and his father, George, a co-owner of the estate, selected Aspen-based Charles Cunniffe Architects to bring that goal to fruition. 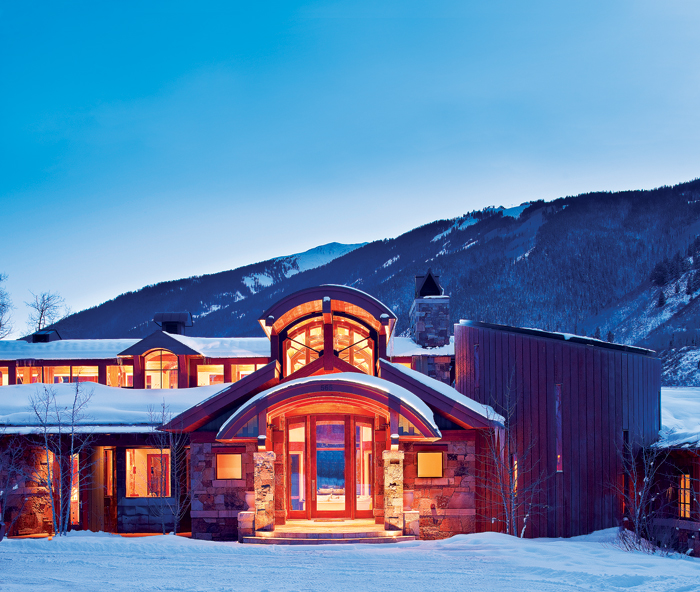 Architect Charles Cunniffe and his project team—architects James Guffey, Janver Derrington and Brian West—produced several designs for the 44-acre site that’s situated on a hillside with southwest views up Castle Creek Valley toward Hayden Peak. “The clients chose an eclectic mix of forms with the greatest variety of shapes,” says Cunniffe, who tailored the design to the sloping site. “The two-story house steps down with the hillside, and various spaces within it have their own outdoor connection with the land, almost like individual small houses would in the context of a village.”

Cunniffe united the various forms by arranging the home’s principal living spaces along a central, arched “spine” that soars 22 feet high and is supported by trusses. “It holds this sculptural composition together as a single piece,” the architect explains. Clerestory windows flank the spine and are punctuated by dormers that further enhance the village-like look while allowing more sunlight to filter into the home throughout the day. “The clerestory brings light into the depths of the house, which don’t get a lot of direct sun in the morning,” Cunniffe says. 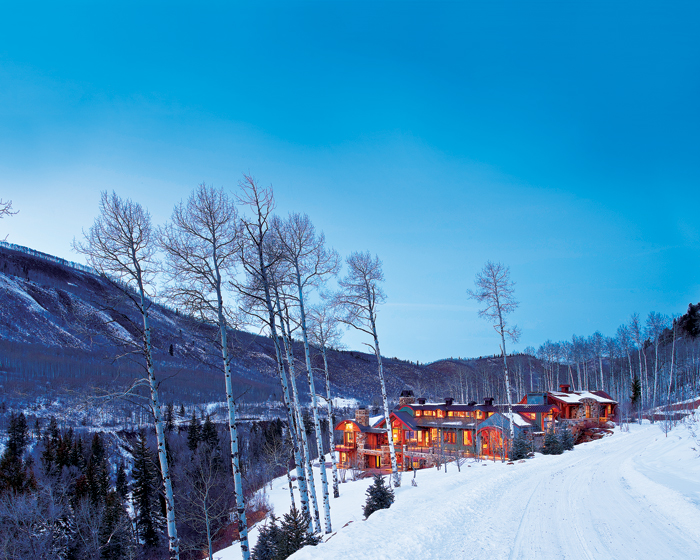 As important as natural light, says Rosenthal, was establishing “a connection to nature within this contemporary envelope.” To that end, the clients and architects selected a variety of warm-toned, richly textured natural surfaces, including reddish-brown jatoba cherry for the floors, window trim, cabinetry, and some walls and ceilings. Fireplaces, as well as some columns and portions of the exterior, are clad with local amber- and gold-toned sandstone. “The way the light glows when reflected off those surfaces is like looking at the world through rose-colored glasses,” Rosenthal says. 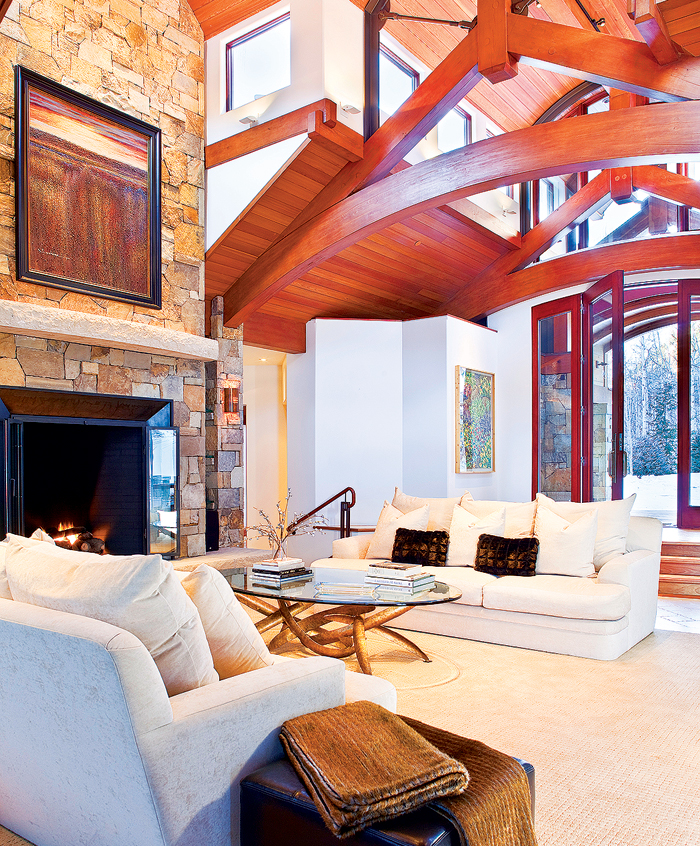 Ethereal though that effect may be, the owners took a decidedly down-to-earth approach when it came to furnishing the house. “We didn’t want a formal experience,” Rosenthal says. “Comfort was first and foremost for us.” Working primarily with Paul Cathers of Cathers Home, an interior design firm and home furnishings store in nearby Basalt, they selected clean-lined and casual California-style pieces with durable fabrics and finishes that complement the home’s architectural materials. “Everything we bought, we sat in first,” Rosenthal says.

Their ultimate goal, the homeowner continues, was to create an intimate experience in a grand structure befitting the Rocky Mountain surroundings. “We wanted to create a space where anyone who came here would feel like king or queen of the castle.” Or, one might daresay, of the village just below that castle.

The varied forms and vast spaces of the village-inspired house called for a variety of ambient and task-oriented lighting solutions that would “highlight the architecture and make the experience of the house interesting and effective both day and night,” homeowner Mark Rosenthal says. To achieve those goals, he and his father and co-owner of the house, George Rosenthal, collaborated with architect Charles Cunniffe and lighting designer Robert “Sardo” Sardinsky, principal of Rising Sun Enterprise in Basalt, Colorado. Take cues from some of their unique effects: 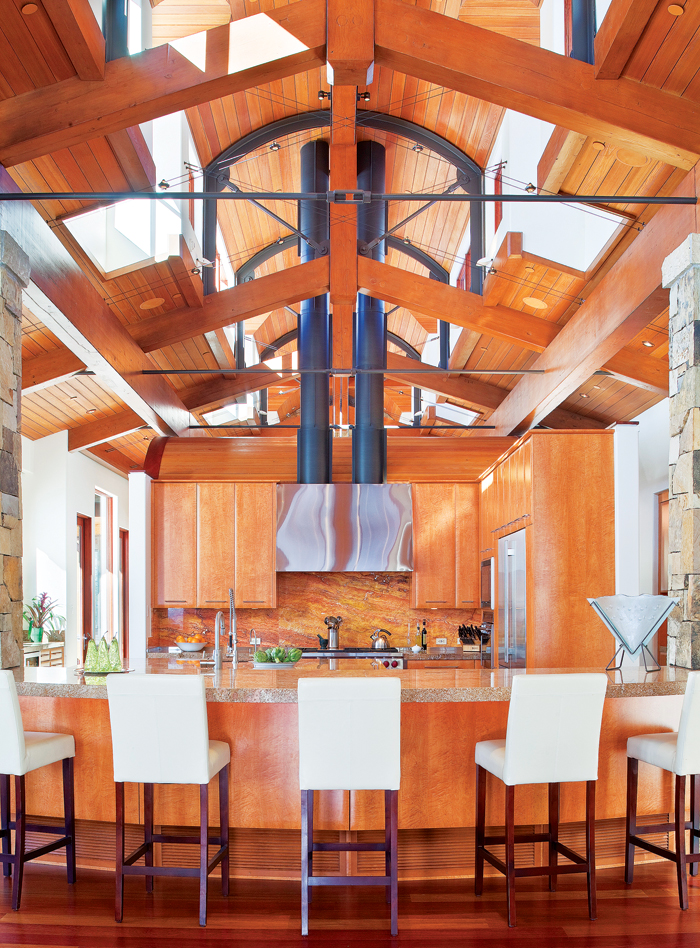 Ceiling Solution
Strung in an X pattern within the house’s vaulted central spine, low-voltage cables include some fixtures pointing downward to provide general lighting and others shining upward to wash light across the tongue-and-groove golden larch wood ceiling paneling. 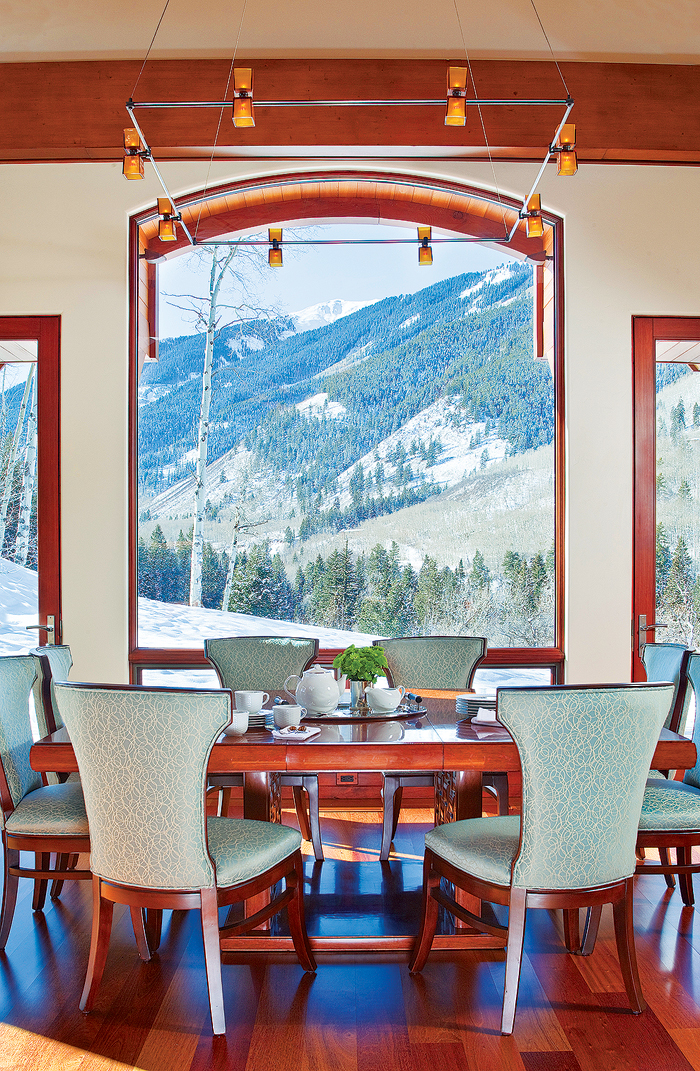 Light to Wine and Dine
Custom-designed dimmer-controlled chandeliers of wire mesh and steel, each tailored to the particular setting, hang over the tables in the breakfast area and formal dining room, as well as a tasting table in the wine cellar. 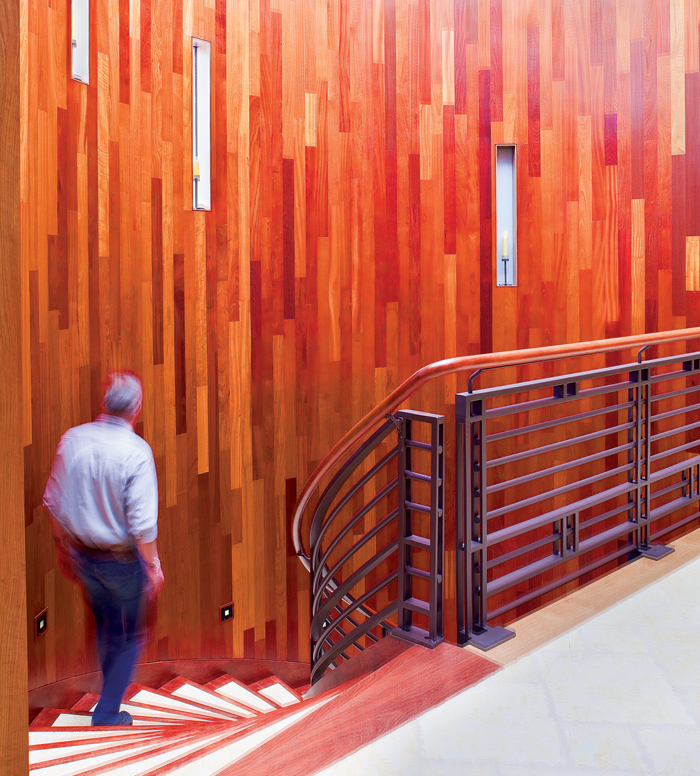 Faux Candlelight
In the cylindrical staircase, a random pattern of tall, narrow windows was added to punctuate the vertical jatoba-cherry paneling. For “a little bit of fun,” says Rosenthal, they added electric “candlestick” fixtures to the openings, each with a flickering flame-like LED bulb.