Nestled into the foothills of Montana’s Beartooth Mountains, Tippet Rise Art Center is an experience

To call Tippet Rise Art Center only a sculpture garden is akin to saying that the Eiffel Tower is just a building. Set on 10,000 acres at the foothills of Montana’s Beartooth Mountains, Tippet Rise is an experience. Discovery lies in the ethereal way that eight mammoth works of abstract sculpture punctuate the landscape.

Works by Alexander Calder, Patrick Dougherty, Mark di Suvero, Ensamble Studio and Stephen Talasnik, all names that fill the collections of MoMA or the Guggenheim or the urban voids of international cities, are an unlikely fit in this rolling prairie.

Despite the museum-caliber collection, Tippet Rise founders Cathy and Peter Halstead would never call themselves collectors.

“To say that we are collectors implies ownership,” says Cathy. “The art and the land are not really things that we can own, it is just a privilege to be able to protect and share them with people.”

Cathy and Peter have known each other since they were teenagers growing up in New England. Cathy is an abstract painter who has shown her work around the world. Peter is an accomplished photographer, musician and poet. The husband-and-wife team have spent a life dedicated to art, education and the environment. 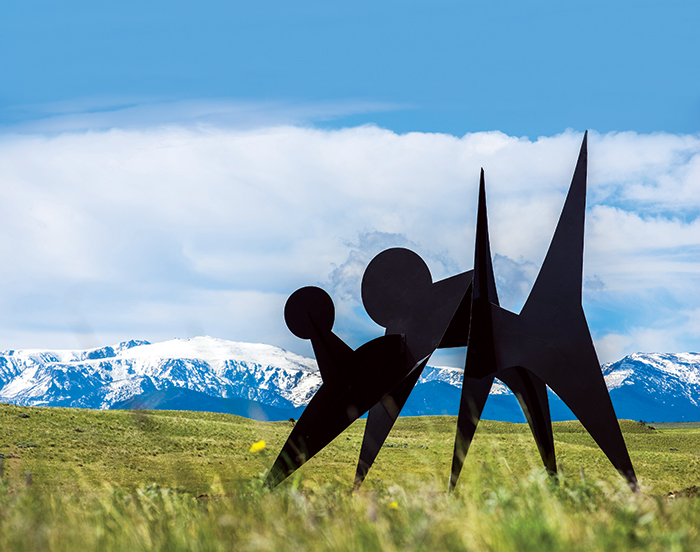 The playful “Two Discs” by Alexander Calder sets the tone for this unlikely sculpture garden in Montana. It is on loan from the Smithsonian’s Hirshhorn Museum.  [Photo by Andre Costantini]

Inspired by experiences at Hudson Valley’s Storm King Art Center and England’s Snape Maltings concert hall, the Halsteads dreamed of creating a space in the West to share music, sculpture and nature. Before launching Tippet Rise, they searched the country for the perfect property.

“Montana was 100 percent good parts,” says Peter. “We found that it was exactly what we had been looking for.”

Tippet Rise opened in 2016 with a concert hall and large-scale sculpture park, while it continues as a working ranch. The Halsteads open their ranch and their hearts to several hundred guests each summer for art tours and a remarkable concert series.

Finding Tippet Rise Art Center is a journey. It’s just 66 miles from Billings, Montana, but a world away from anything. The country road to the art center from the town of Absarokee  toward tiny Fishtail is an impossible strand of gravel and dirt that seems to melt into the legendary big sky itself. Across creeks, through swaths of hayfields and toward some of Montana’s highest mountains, the drive alone is part of the experience. 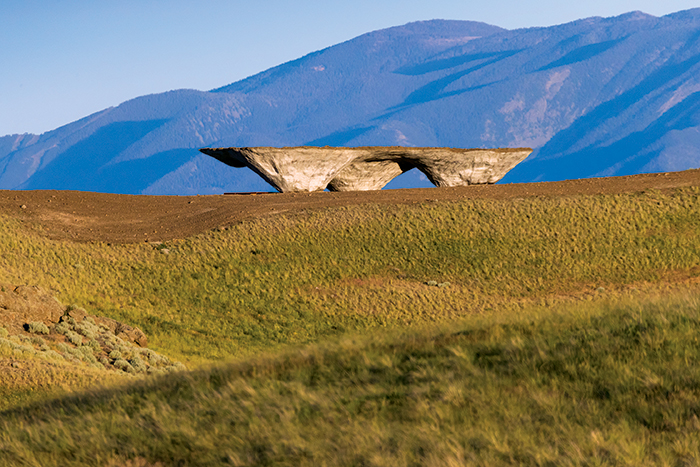 ​Tippet Rise’s sculptures create connection to dynamic geology on the 10,000-acre ranch. Compared to the surrounding landscape, “Domo” by Ensamble Studio offers a sense of scale.  [Photo by Iwan Baan]

The surrounding landscape is so stunning that it’s hard to conceive man-made art could compete with this stretch of Montana in summer. Yet, at Tippet Rise, where each sculpture is curated to enhance the beauty of theenvironment, it is perhaps utter dissimilitude that inspires awe. The “Domo,” designed by Ensamble Studio, for instance, rises as though it was unearthed from prehistoric origins by the scouring of wind and sun and weather to create a cool, arched mushroom that resembles a Neanderthal shelter. It is 1,000 cubic yards (about 2,000 tons) of concrete that was formed on site, then covered with Montana soil and seeded with native grasses to reinforce the organic statement of place, echoing the elements, acoustically channeling voices and the musical concerts held here. This unlikely work of art is so massive in scale that it dwarfs a group of people standing in its shade. This fact puts the dome of sky and the wall of mountains into perspective, making all of it even more exhilarating. The experience engages all the senses and conveys feelings of being very small compared to the vastness of this place, but also part of something monumental.

“We’re caretakers of the art and the music that happens here,” explains Peter, “and really we are stewards of this land.”

Tippet Rise Art Center is open to the public from late June to early September. Reservations for art tours are required; free for walkers and cyclists, and $10 per person for van tours. 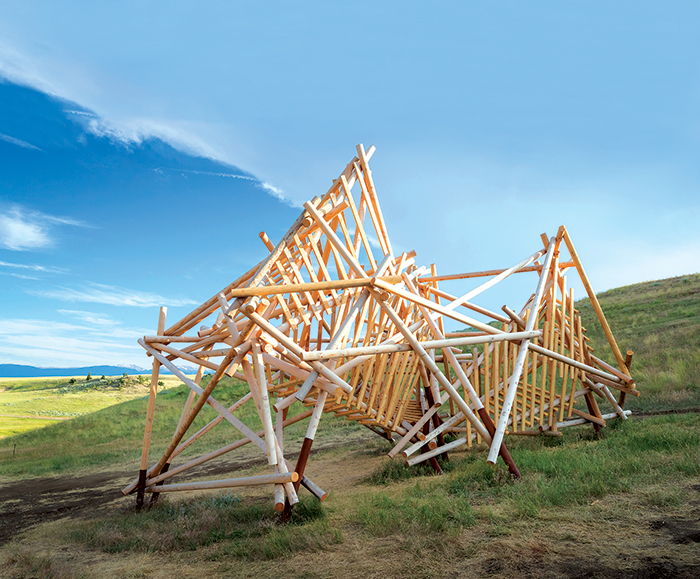 Sculptor Stephen Talasnik is planning a series of “nomadic wooden compositions” at Tippet Rise. “Satellite #5: Pioneer,” 2016, is the first in the site-specific series.  [Photo by Iwan Baan] 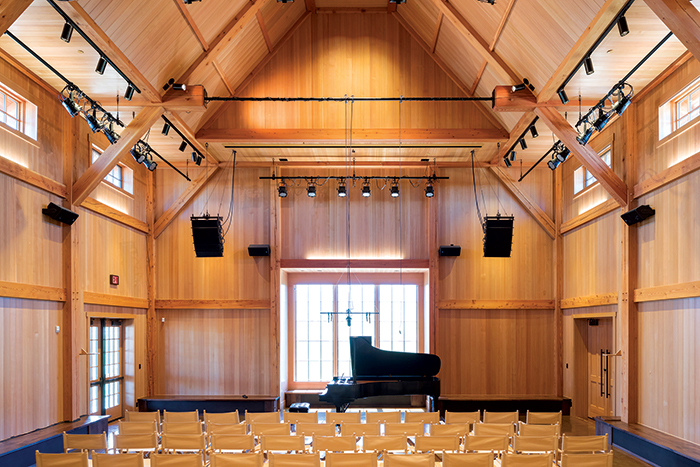 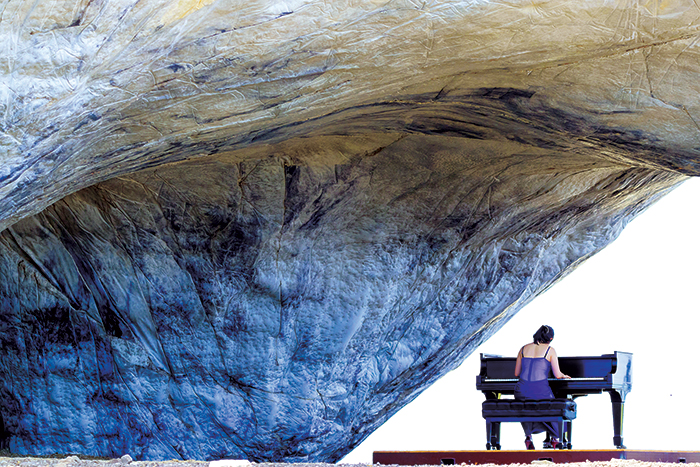 Tippet Rise owns 12 Steinway pianos; one is transported outside for concerts under the Domo sculpture.  [Photo by Iwan Baan] 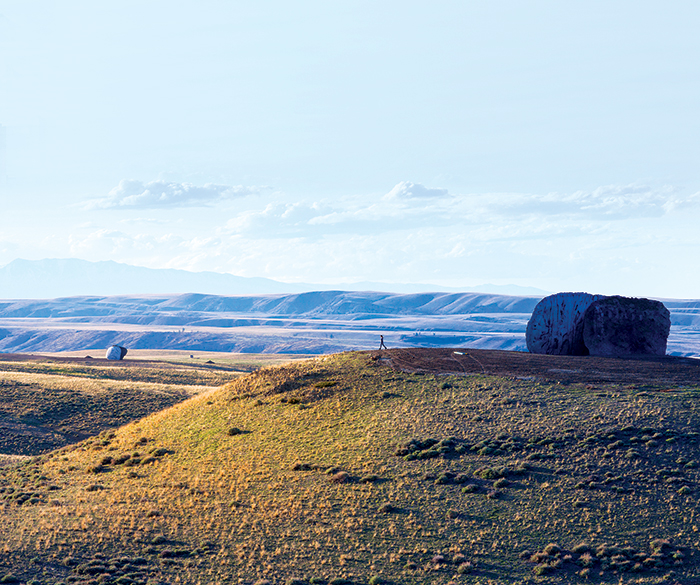 Beartooth Portal” by Ensamble Studio stands on the horizon and resembles a cracked egg of a prehistoric creature.  [Photo by Iwan Baan] 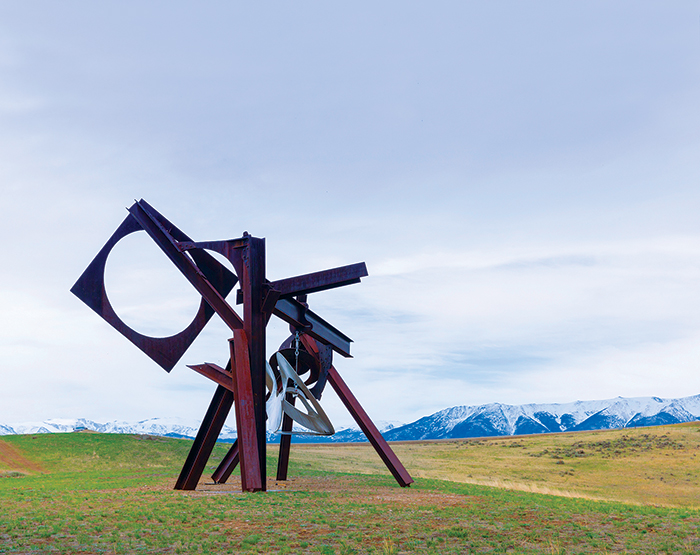 "Beethoven’s Quartet” by Mark di Suvero features a mallet to hit the large steel sculpture, creating a sound that reverberates across the landscape. [Photo by Iwan Baan] 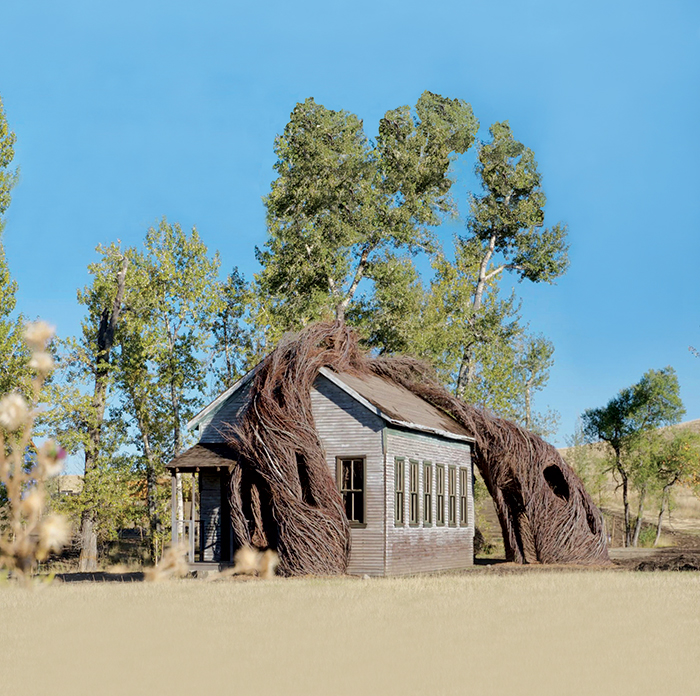 Patrick Dougherty’s replica of a frontier-period schoolhouse is wrapped in a tangle of local willows; it seeks to embody connection between art and nature. [Photo by Djuna Zupancic]

Mark di Suvero’s “Proverb” sits as an unlikely piece of industrial architecture that contrasts the soft grassy hills surrounding it and pushing the boundaries of how art and nature intersect. [Photo by Iwan Baan] 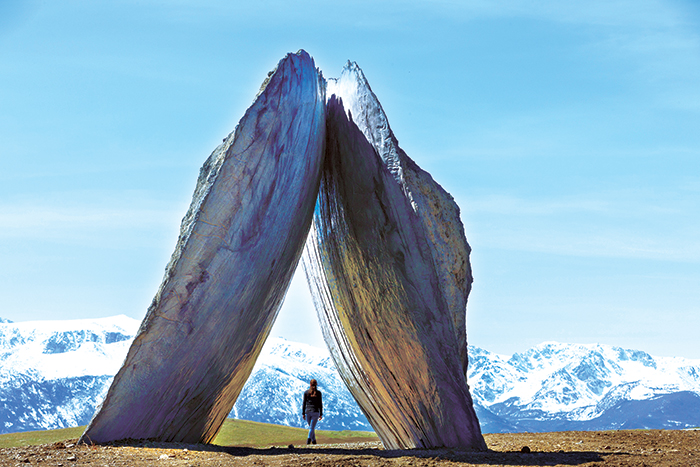 “Inverted Portal” by Ensamble Studio is a cast concrete sculpture that rises like a geological formation to frame a view of the distant Beartooth Mountains.  [Photo by Iwan Baan]