The Coyote Ridge Farmstead in Avon, Colorado, is in many ways the apex of homeowner Mike Farr’s uncommon approach to design and woodworking. The luxury bachelor pad is a 12,000-square-foot hat tip not to the barns of Colorado’s alpine landscape (a logical assumption) but rather to the rural structures of Farr’s native Nebraska. He and architect Andrew James Abraham sketched out the design on a roll of tracing paper one afternoon at a local coffee shop.

“I told Mike, ‘I’m from the Midwest too, so farmsteads come easily to me,’” recalls Abraham, principal of AJA Studio, based in Denver and Edwards, Colorado. “I asked him, ‘How far do you want to go with this idea?’” As it turns out, pretty far.

Farr’s longtime friend Tracie Schumacher, principal of Studio80 Interior Architecture and Design in Eagle, Colorado, attests to the total effect of such exactitude. “There’s definitely a homemade quality to the design, but it’s also very sophisticated thanks to inspiration that came from around the world,” she says. “We wanted to create a space that was at once functional and intellectually stimulating.” 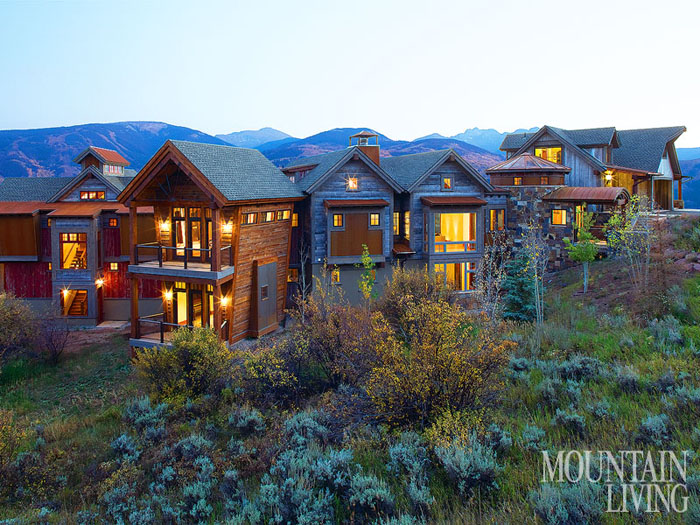 The Coyote Ridge Farmstead is sited on an alpine hillside in Avon, Colorado. 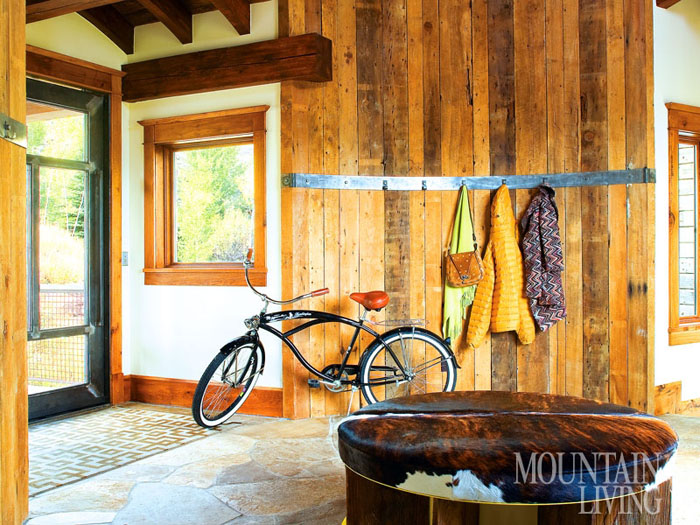 Homeowner Mike Farr's rustic-modern aesthetic is evident upon entry in the "grain silo:" a spoke-style chandelier by Fabulux is a contemporary reiteration of the reclaimed-wood ceiling beams, and a custom yellow powder-coated steel bench is "steered" West with cowhide upholstery. 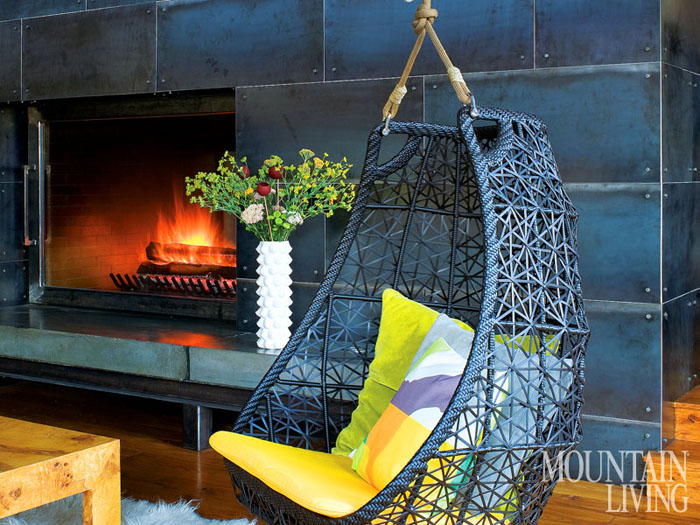 A Maia Egg Swing chair by Kettal, suspended from the rafters with a vintage nautical rope, is a whimsical counterpoint to the living room's muscular steel-plate fireplace. 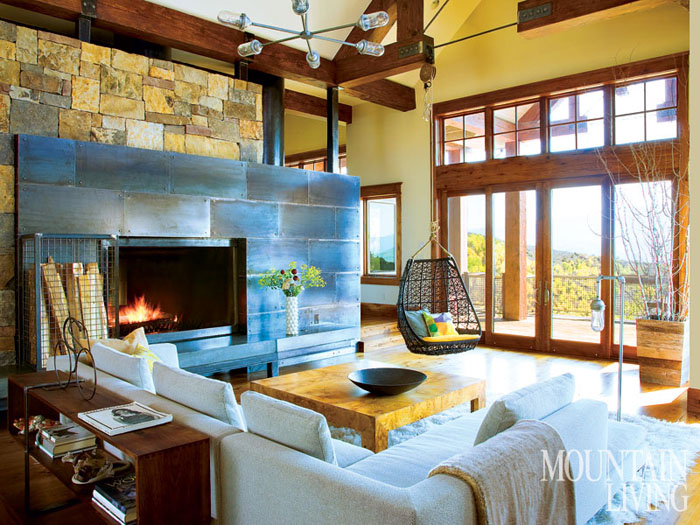 In the living room, modern woodgrain-inspired upholstery  on the B&B Italian sectional is a subtle nod to the farmstead's primary material. 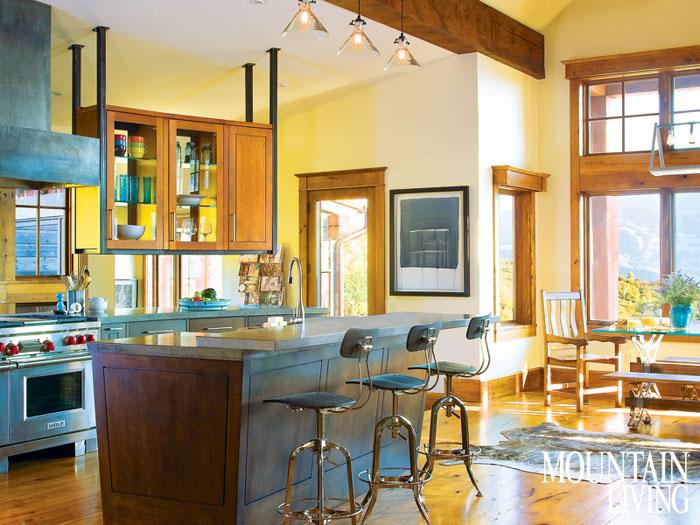 The open kitchen is anchored by a custom island that Farr crafted from cherry wood; three of its four sides lean out at a seven-degree pitch to echo the slanted walls of the dining room, which was inspired by the shape of a corncrib. 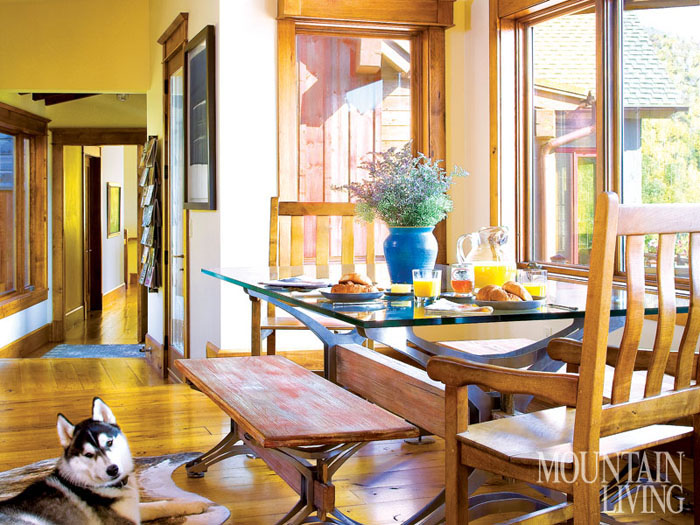 The breakfast nook is home to Farr's custom take on a standard trestle table, which features an undercarriage of laser-cut steel and a sturdy glass top. The brushed-aluminum frame of the Radius Chandelier by Fabulux is appointed with a pane of corrugated fiberglass that diffuses light for a flattering glow. The nook's generous windows offer a view of the nearby ski slopes at Beaver Creek and Bachelor Gulch. 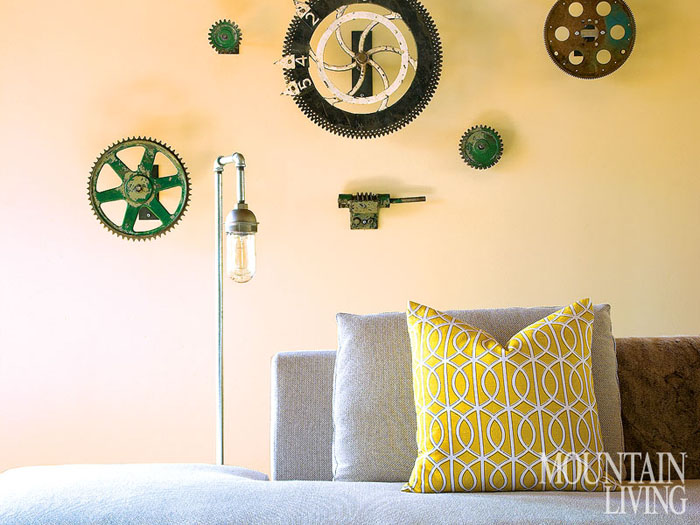 Farr unearthed a few of the gears displayed in the living room while exploring an abandoned mine on Mount Sherman, a fourteener in Colorado's Mosquito mountain range. 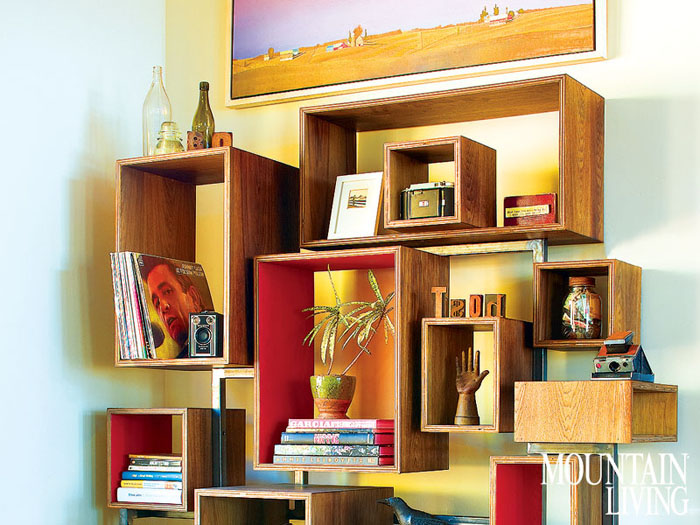 Each display box in this custom-made fragmented bookcase is hung on a different plane; some are sunken back, some stick out. "This way, it's a different piece of art from every angle," Farr says. 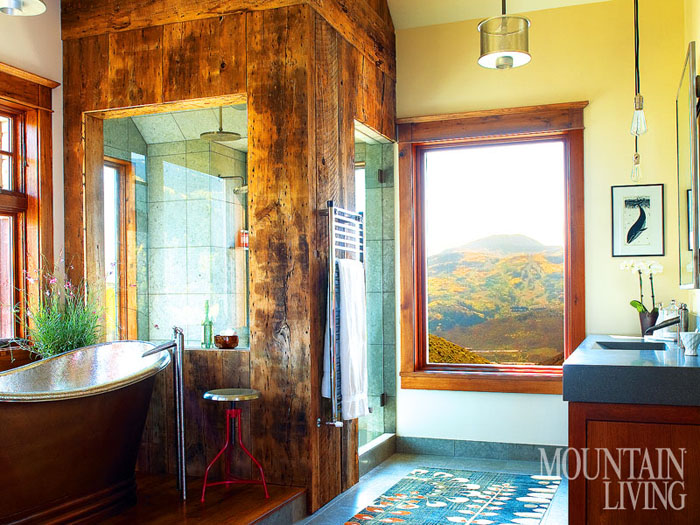 The spacious shower stall in the master bathroom is modeled after an old outhouse; its "roof" is topped with corrugated metal and its floor is lined with nickels, including eight rare Buffalo nickels (also known as Indian Head nickels), which were made by the United States Ming from 1913 to 1938. 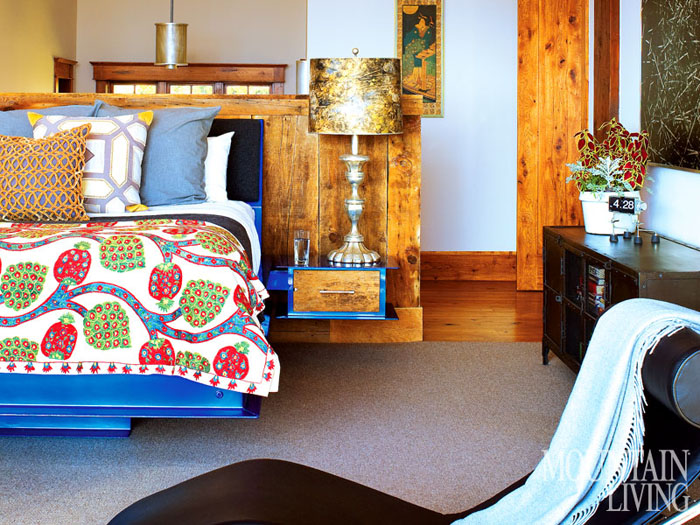 Farr designed and built the bed in his master suite to appear as if it were hovering above the ground. Its electric-blue hue, inspired by Chevrolet's 1963 Corvette Grand Sport race car, is an unexpected surprise in a room dominated by rustic wood trim and warm, natural hues.