An Architect's Home in Jackson Hole

Before designing any residence, a thoughtful architect will aim to gain a firsthand understanding of the site: how it relates to the landscape; the impact of the seasons; where the sun rises and sets at different times of year; where snow accumulates and where the winds blow. But most architects have only a few days to gather such impressions.

Architect John Carney, however, enjoyed a rare opportunity to acquaint himself thoroughly with an almost-5-acre site on rural Fish Creek Road—a 25-minute drive from downtown Jackson—before building his home there. Over a span of three and a half years, Carney, founding principal of Jackson-based Carney Logan Burke Architects, and his wife Elaine lived in a small guesthouse he had previously designed and built on the property, just a short stroll from the location of the main residence they finally moved into in October 2014.

They hadn’t planned to wait that long. But they bought the parcel shortly before the Great Recession of 2007–2008, and “the guesthouse was simply less expensive,” Carney explains. “I don’t normally have the luxury of living on a property before I design, but I got to watch this one through the seasons and get to know it intimately. Elaine and I would walk up the slope, stand on the site and envision its potential.”

Those visions took Carney through what he estimates were six or seven different designs before he arrived at one that he considered just right. “We came to realize we didn’t need huge spaces,” he says of the layout, with approximately 3,384 square feet of living space arrayed on two levels that step downhill. The efficient plan prioritizes public areas for entertaining over sleeping spaces. “In the living and dining areas, we wanted an easy traffic flow that would let us invite six or eight people over for dinner without having to rearrange the furniture,” Carney explains. “But our upstairs master bedroom is just 16 feet wide and 10 feet deep, so we feel like we’re sleeping in a tree house.”

That effect speaks to one of the priorities that influenced Carney’s design: “We wanted to take advantage of a view of the Sleeping Indian,” he says, referring to an evocative mountain formation in the Gros Ventre Range about 15 miles due east. They also hoped to keep an eye on the regular parade of wildlife—including moose, elk, bears and foxes—that rambles among the property’s groves of aspen, pine and fir trees.

Conserving space also enabled Carney to devote more of the budget to a simple palette of high-quality materials, including bonderized-steel siding, integrally stained board-formed concrete, and sections of cedar-shingled walls both inside and out. At once contemporary and timeless, sleek and rustic, the aesthetic feels in complete harmony with its surroundings. It also effortlessly welcomes a blend of modern furnishings and cherished family antiques that include at least one dining chair believed to be from the palace of Cardinal Thomas Wolsey, who served England’s King Henry VIII in the early 16th century. “I definitely wanted this house to mediate between new furniture and the old,” says Carney, who credits his firm’s interior designer Sarah Kennedy for collaborating with his wife on all furniture selection.

The result of all these elements is a testament to the strength of a design that evolves over time. “It’s a contemplative, recharging experience,” Carney says, “a wonderful interplay with the environment, and a truly warm and comfortable place, whether it’s just the two of us here or the entire family.” 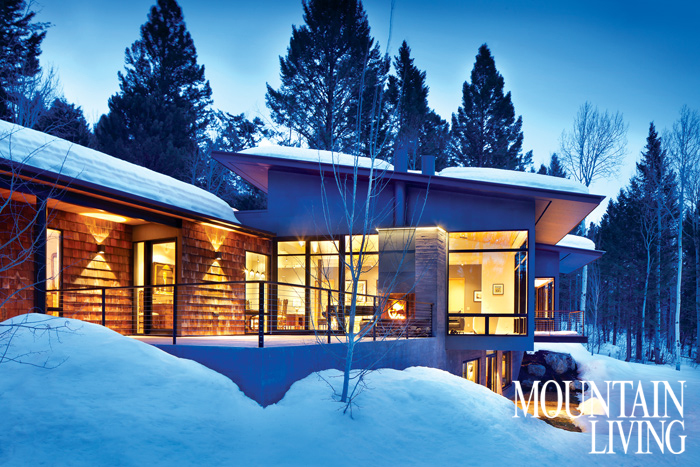 A spacious deck at the home’s main entry is warmed by an outdoor fireplace that’s a near mirror image of the living room’s hearth. The exterior’s cedar shingles strike a rustic note evocative of more traditional architecture in the region. 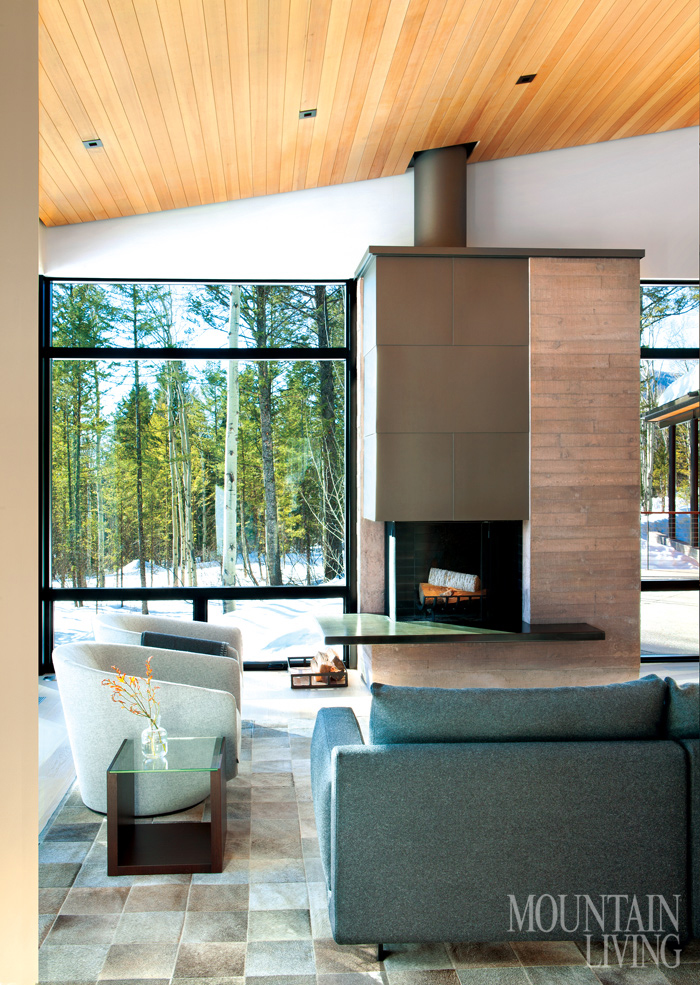 In the living room, beneath a sloping ceiling clad in hemlock boards, a pair of U Turn chairs and an Elle sofa, both by Benson Furniture, face views of both the surrounding woods and mountains and the concrete-and-steel fireplace with its cantilevered blackened-steel hearth. 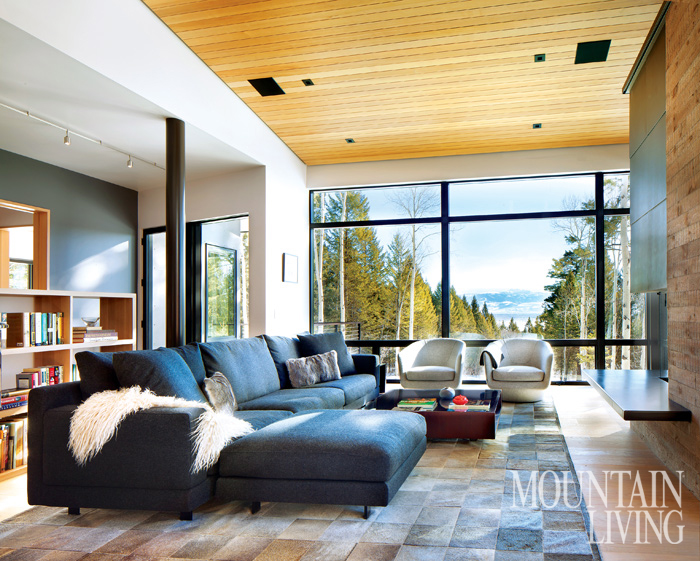 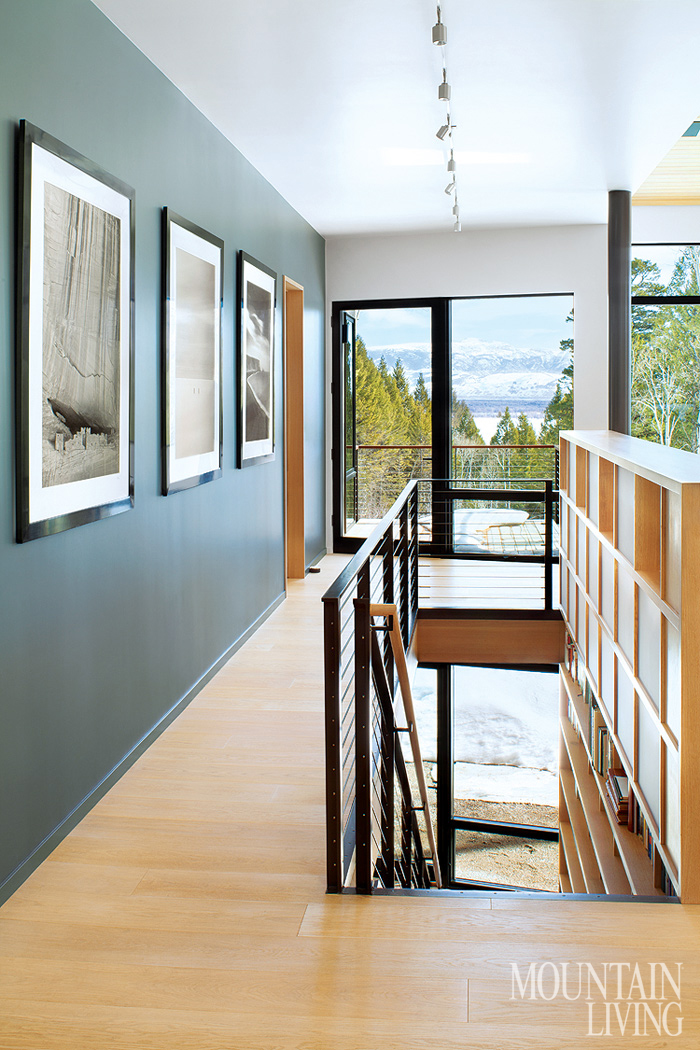 Beside a built-in bookshelf, an open stairway descends to the lower level. 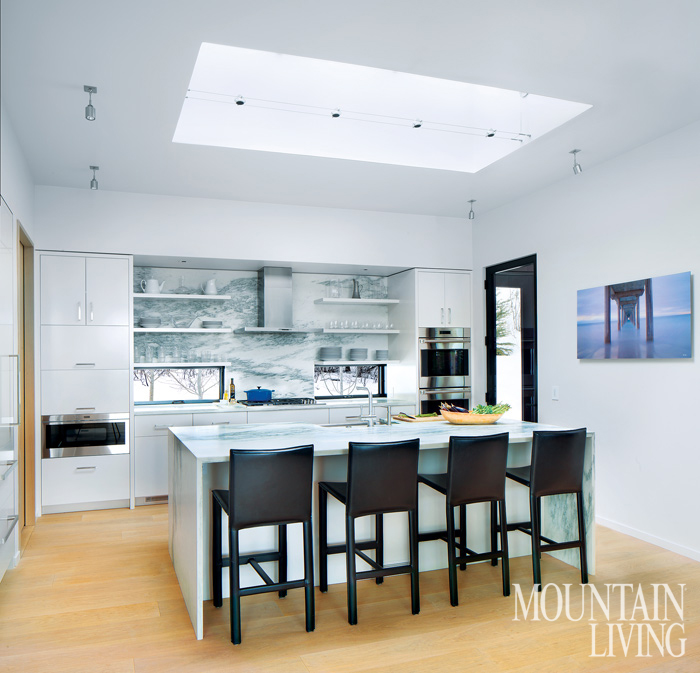 The kitchen’s Calacatta marble backsplash blends with the snowy slope outside. 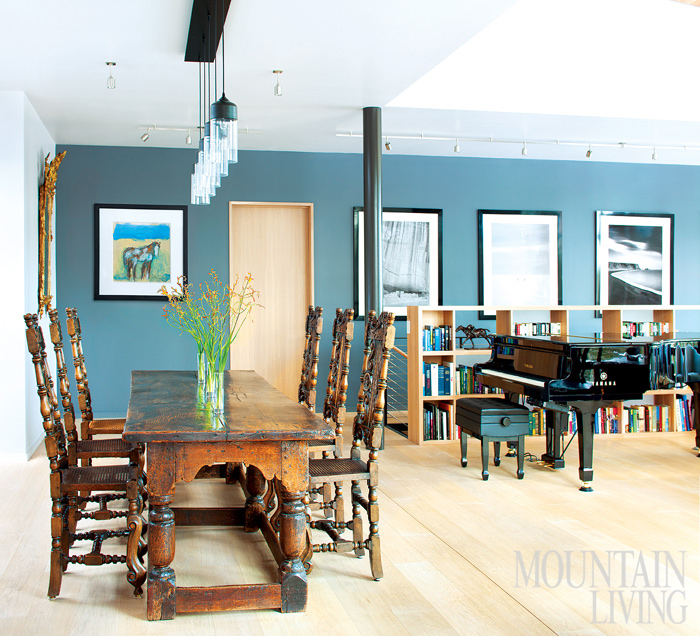 Sleek pendant lights hang above a 16th-century English table surrounded by dining chairs of the same period, one of which is believed to be from Cardinal Wolsey’s palace. 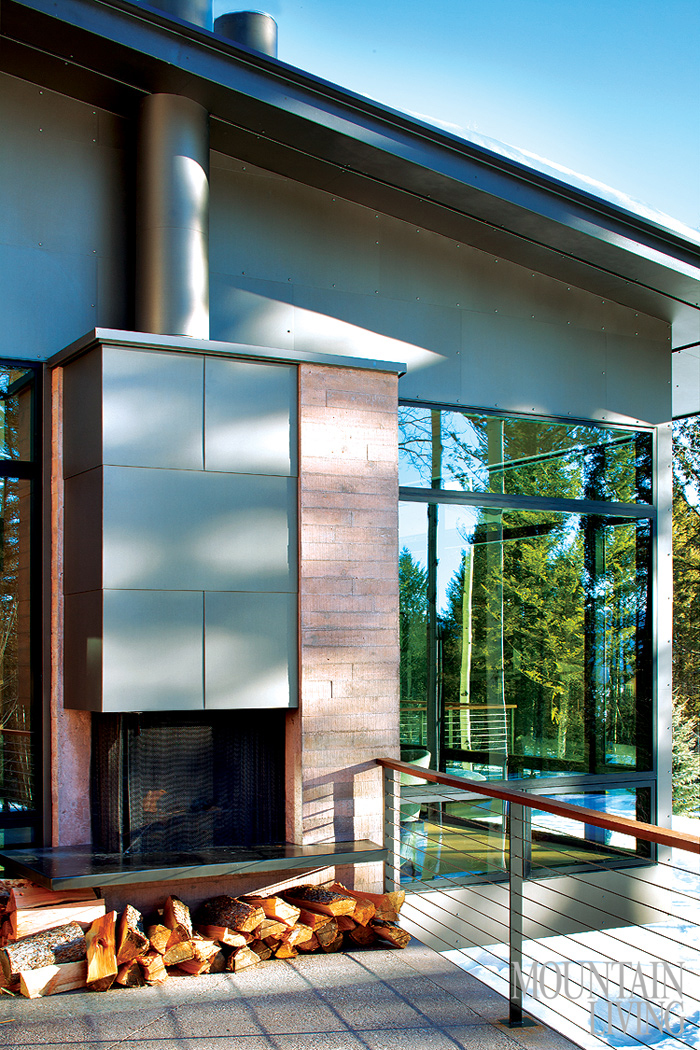 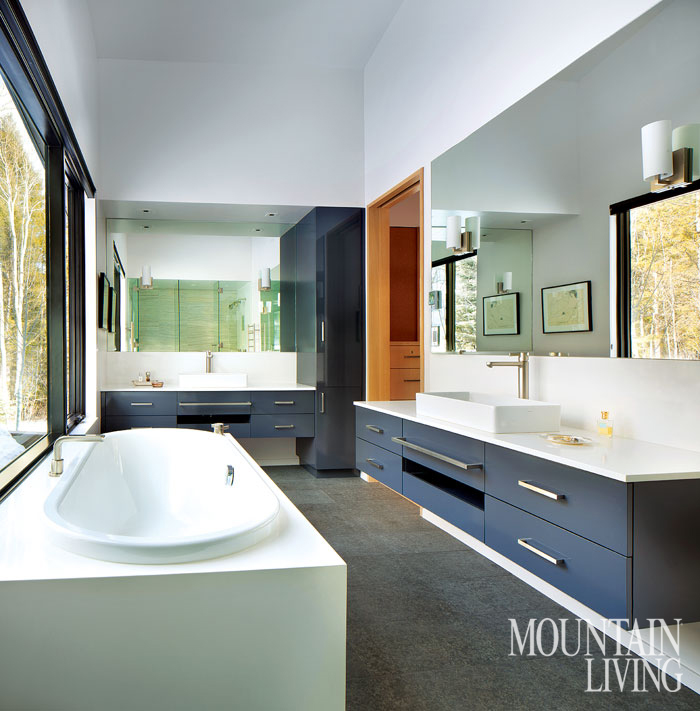 The master suite’s simple bed by Agnes Bourne defers to an antique French corner chest and a self-portrait painted by Carney in 1972. 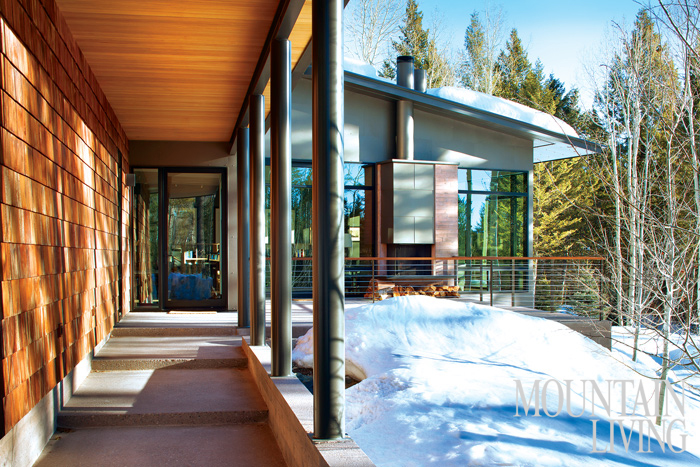 Carney chose a glass front door and sidelight for the open, welcoming feel it would create. 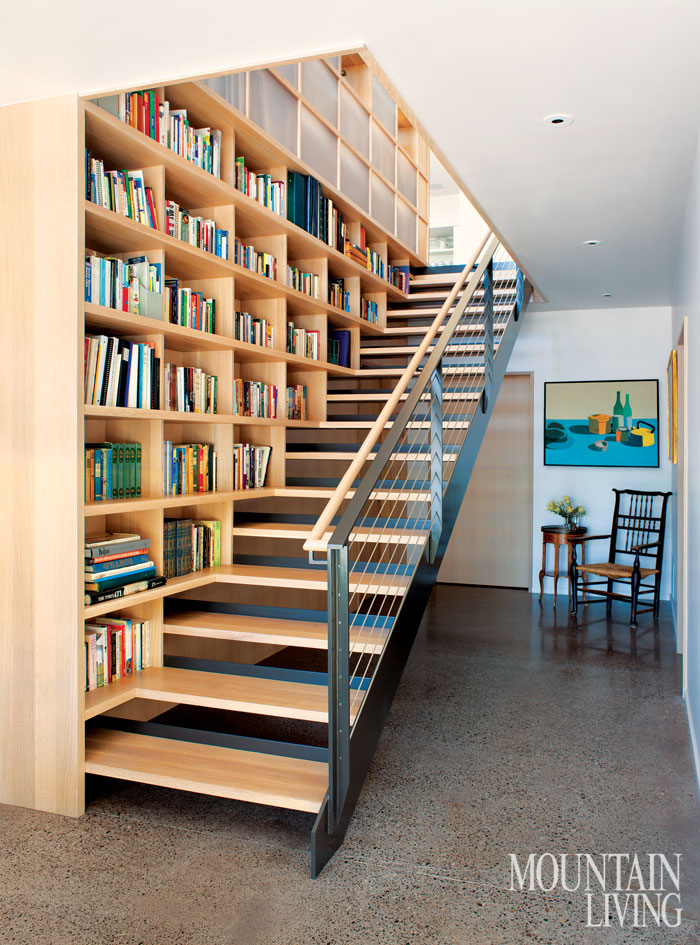 The lower level features a polished concrete-aggregate floor and a still life painted by the architect.

BLENDING ANTIQUE & MODERN
Architect and homeowner John Carney explains how he incorporated family heirlooms and antiques into a contemporary setting—and how you can too.

KEEP IT SIMPLE
“Practice a museum aesthetic. A more modern interior, free of crown moldings or wall-coverings and with neutral colors, will set off whatever objects you might have in a room.”

LET IT GO
“There were definitely family antiques that we didn’t have room for,” Carney admits. Rather than cramming them into his new home, he says, “I’ve given some of them to my kids. I’ve tried to redistribute the wealth a bit.”

DESIGN AROUND AN OBJECT
Carney suggests that each piece “have its own space.” He and his wife designed various rooms with particular antiques in mind, ensuring that pieces wouldn’t compete with one another for space or attention.

LIGHT SUBTLY
“We like to hide the light source as much as possible. Use it to feature an item rather than highlighting the fixture itself.”

A Rocky Mountain Abode That Turned the Homeowners Into Homebodies