It would have been simpler for Linda Perlman to build a new guest cabin on the land behind her home in Jackson Hole. But the designer couldn’t resist the draw of an 80-year-old log cabin from nearby Crescent H Ranch, which began as a dude ranch in 1927 and morphed into one of the West’s most beloved fly-fishing camps.

“I just loved the ranch,” she says. When a new owner purchased it, the property’s small guest cabins were auctioned off—and Perlman seized the opportunity. “It was about preserving a piece of Jackson,” she says.

Perlman’s cabin traveled the short distance between the Crescent H Ranch and her property on a flatbed truck. The designer and her husband had reserved a little piece of land behind their home for an art barn or guest house, and the log cabin fit the spot perfectly.

Then Perlman and architect Andy Ankeny of Jackson-based Carney Logan Burke Architects set to work updating and remodeling the one-room cabin. Their first task: add a small bedroom and bath to the back of the structure. The challenge, of course, was blending this new space with the original cabin so the 532-square-foot home felt whole.

Perlman had the solution, Ankeny explains: “Linda called to tell me she wanted to paint the whole cabin black. I thought right away that it was a very cool idea.” Perlman was inspired by a black barn she had seen in South Carolina years ago. “I will never get the image of that exquisite barn out of my head,” she says. In a place like Jackson, where brown wood dominates the architecture, a black cabin would be a nod to modernity.

“I also wanted a subtle transition from the old cabin to the new space,” Perlman says. So the original cabin got a coat of high-lacquer black paint, and the addition, constructed of board and batten, is painted a softer, flatter black hue.

>While Ankeny worked with a structural engineer to examine the home’s structural integrity and bring the cabin up to code, Perlman hunted for the perfect roofing material. She and Ankeny decided on bonderized metal. “It’s a soft, beautiful gray; it almost looks brushed,” she says. The new roof is far more insulating than the original and extends over the front porch—which faces the Grand Teton—to create a welcoming entrance for guests.

The colors used inside the cabin are similar to the exterior. “We kept to a very narrow palette because a small space can’t take too much,” Perlman says. “I wanted it to feel fresh but not frenetic.” To rid the walls of their natural golden glow, Perlman hired painters to sand them and then pickle the logs a soft gray. In the addition, she clad the walls in wood reclaimed from the fencing that keeps snow from blowing over Wyoming roads. Its smoky gray color blends perfectly into the space.

The final touches marry a cozy Western vernacular with a hint of glam. Perlman replaced the worn, rickety floors with wide-plank Douglas fir painted in high-gloss black. In the new (very small) bathroom, she chose polished Carrera marble for the vanity and shower and crowned the space with a Dornbracht mirror and faucets. And Perlman herself scouted the nearby Snake River for rocks that she had made into drawer pulls and doorknobs.

“I hope our guests feel what I feel in the cabin: a connection to Jackson,” Perlman says. At the end of the day, she and her husband often make the short walk from their home to the cabin’s front porch, and watch as the setting sun makes the Tetons glow. “The cabin feels like it’s been there forever—almost. I wanted the bones to be historic, but I also wanted it to feel like we brought it back to life.” 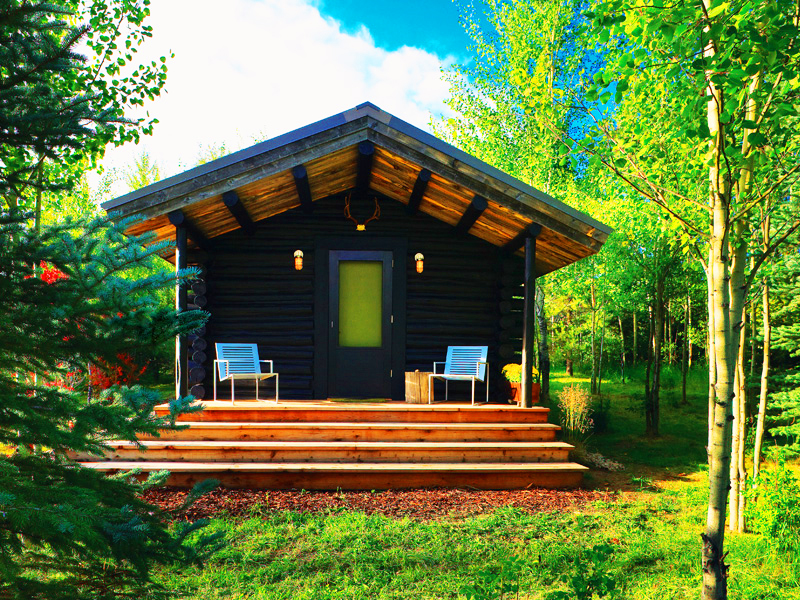 The front porch is Perlman's favorite part of the cabin. In keeping with its design, she skipped the typical rocking chairs in favor of retro chairs from Room & Board. Carburetor Bulkhead lights from Urban Archaeology complete the simple, modern style. 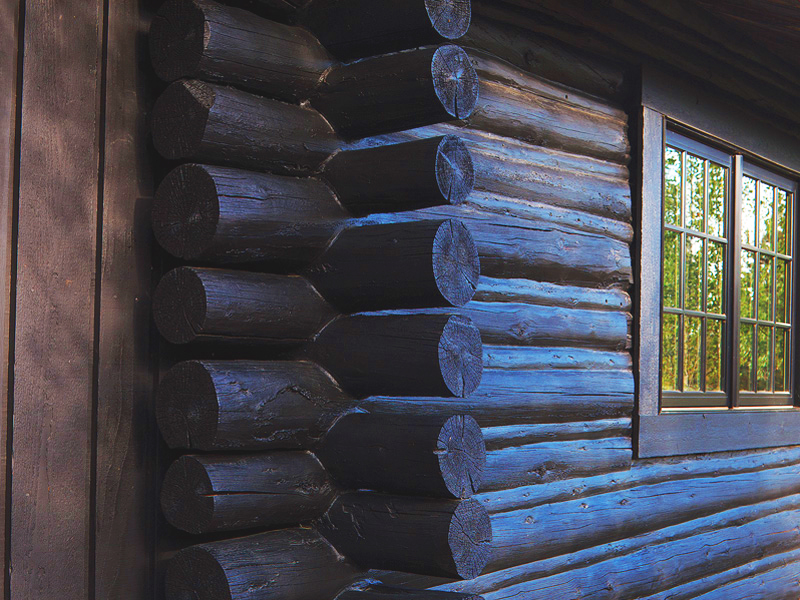 Her decision to paint the cabin's exterior black was inspired by a black barn she saw in South Carolina many years ago. 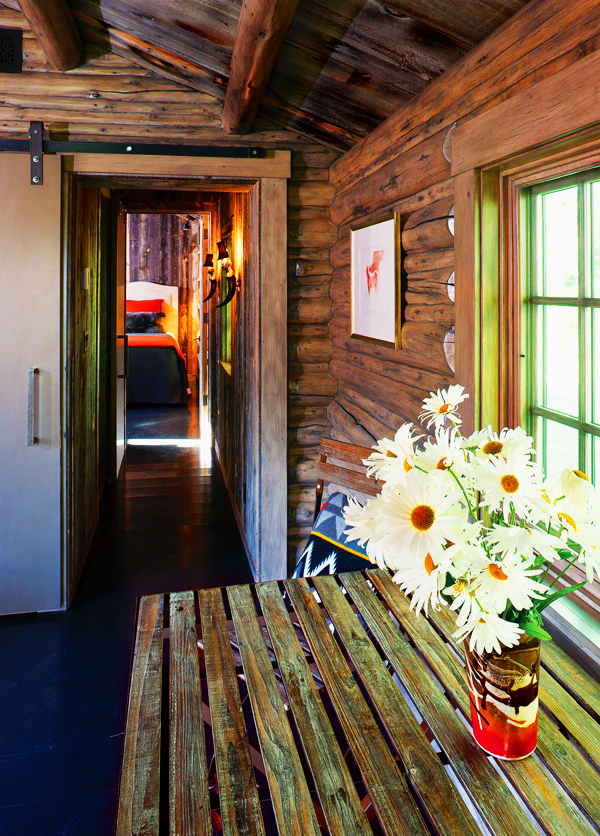 "This is a cozy little cabin in the woods that feels like there wasn't much fuss over—but there was," architect Andy Ankeny says. By changing typical Western materials slightly—sanding and pickling the cabin's original logs, for example—Perlman preserved the cabin's historical essence while making her own design statement. 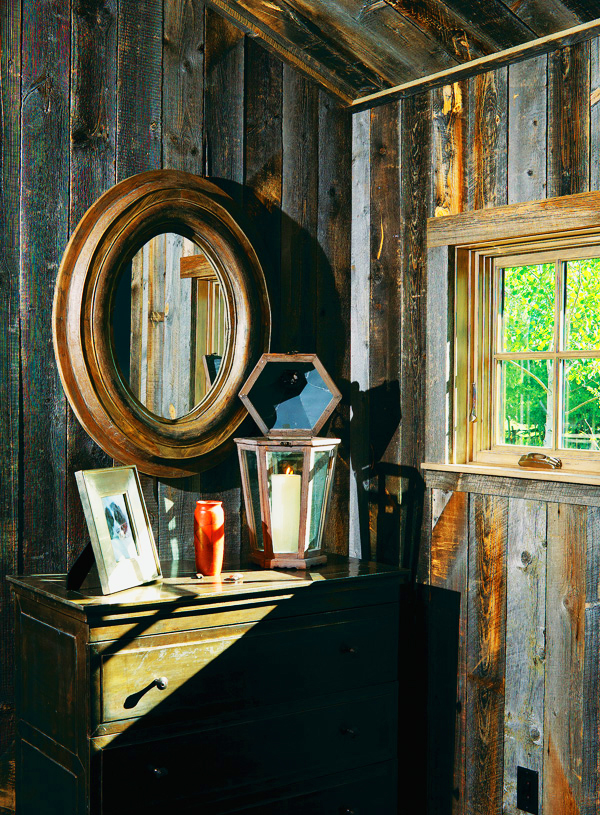 By using a simple color palette—gray, black and cream—Perlman could add bold colors in the small bedroom to great effect. 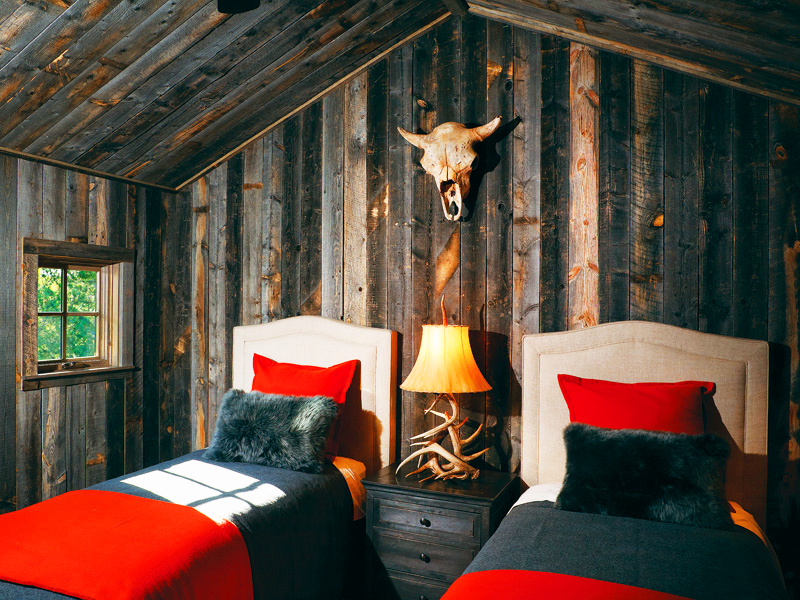 Pendleton blankets and pillow covers snuggle up to Restoration Hardware headboards covered in Belgian linen. Perlman found the antique buffalo skull at Fighting Bear Antiques in Jackson Hole. "The minute I saw it, I knew I would put it on that wall," she says. Her decision to paint the cabin's exterior black was inspired by a black barn she saw in South Carolina many years ago. 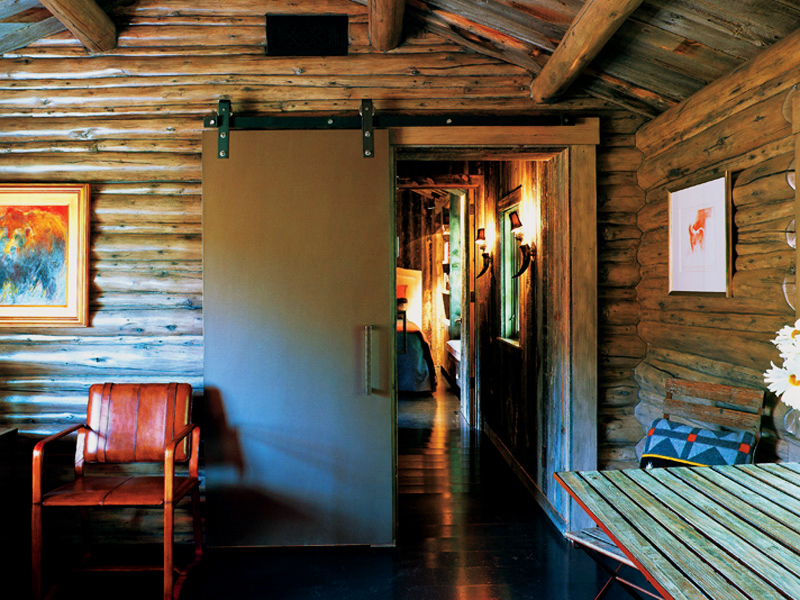 In the small living area, the leather buckle chair from Restoration Hardware feels Western and modern—essential to the cabin's ethos. Like the roof, the door is made of bonderized metal. 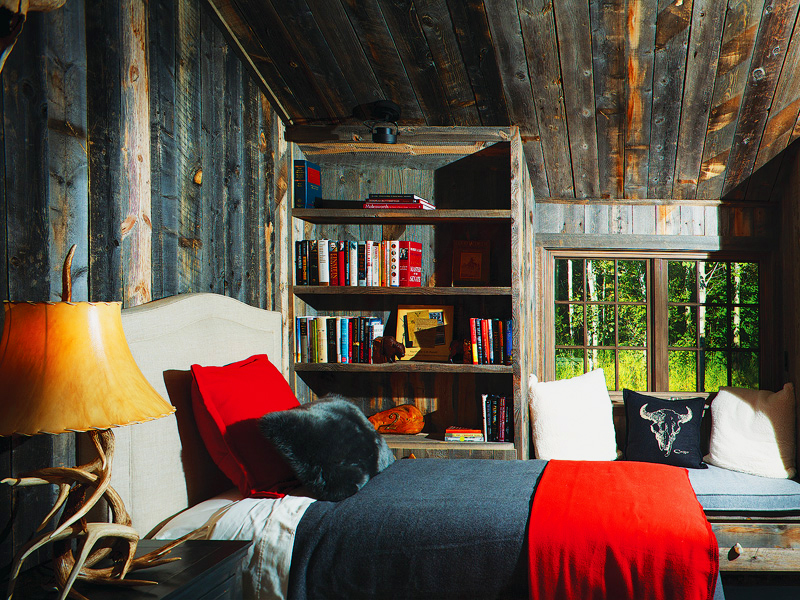 Bedside built-ins made of snow fencing hold books about the West. Kyle Anderson of Jackson-based Game Trail Gatherings made the white-antler lamp. 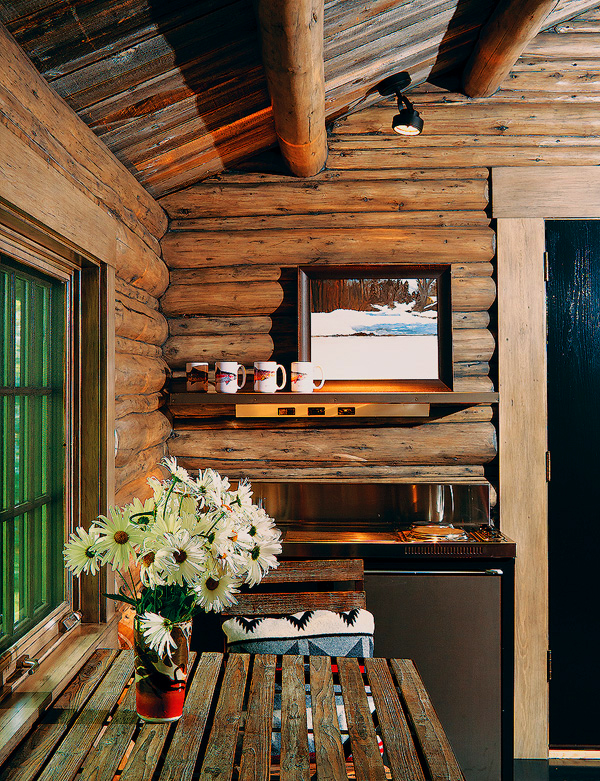 In the kitchenette, leggy chairs flank a simple table—all from Blue Ocean Traders. For the pillows, Perlman used remnants of Pendleton wool fabric. 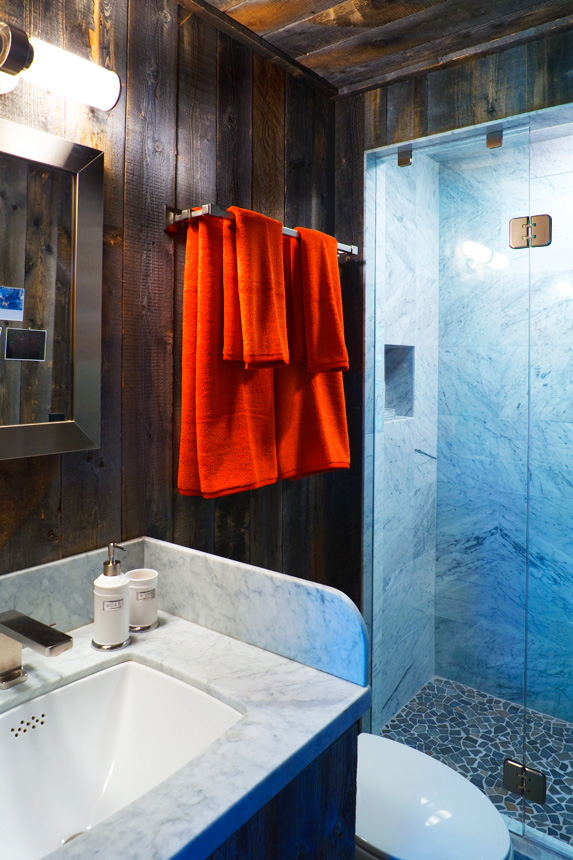