A Trio of Historic Cabins, Reimagined

Using homes saved from demolition, an architect couple creates a restorative retreat in the mountains of central Colorado

Situated on the edge of the San Isabel National Forest outside Buena Vista, Colorado, the Wellspring cabins are nearly impossible to spot with the naked eye, and navigating the dirt access road without a high-clearance vehicle is ill-advised. But that’s exactly the point.

“One of the best parts about it is that it’s so hidden,” says Charlotte DeChant, who owns the 10-acre property named after a beloved proverb with her husband Doug. As founding partners of Shepherd Resources (SRI)—an architecture firm in the Vail Valley—the DeChants bought the land in 2005 with the intention of turning it into a reclusive weekend retreat, where they could disconnect from the workweek and reconnect to nature, all while fulfilling one of Doug’s lifelong dreams.

“Since I was a child, I’ve wanted a cabin in the woods,” Doug says.

Surrounded by the towering Chalk Cliffs, acres of ponderosa and pinyon pines and the babbling Chalk Creek, the remote location is something out of a storybook. (In fact, it inspired the setting in a novel series after the author stayed on the DeChant property for a week.) Its remote location also means no cell service and no Wi-Fi, which encourages a slowed-down pace of living and more time spent reading, writing, painting and talking.

“You have to learn how to let it go,” Doug says. “It takes practice, but it’s so important.”

Though Doug and Charlotte both describe themselves as modernists, the structures they’ve built on the land over the past 13 years better match their woodsy surroundings. The main buildings are a trio of rustic log cabins with steel roofs—each the result of a rescue mission. While driving around nearby forestlands and past ranch properties, the DeChants stumbled upon vacant historic cabins that were in danger of demolition.

“Through our network or our own observation, we realized that these buildings were going away, whether that was by being burned for firewood, being buried in the ground, or being hauled off to the landfill,” Doug says. “It was heartbreaking for us. So we kept acquiring these cabins, not necessarily knowing what we would do with them.”

Log by log, the cabins were dismantled and trucked to their land in piles. After toying with the idea of combining the three structures into one large house, the DeChants decided that each building was more impactful on its own. With the help of Jim Guida of Guida Construction, the cabins were reassembled as a triad and now look as if they’ve always been part of the land. One 1,200-square-foot cabin contains the master suite, an 800-square-foot structure houses a guest-cabin duplex, and the third and largest building acts as a lodge with bunks and plenty of space to curl up by the fireplace or host family dinners during the holidays. A garage built from remnant timber and a smattering of other works-in-progress dot the property.

Like the cabin shells, most of the interior furniture and accessories were secondhand finds. The collection—ranging in style from Midcentury Modern to Adirondack—was primarily bought at thrift stores and consignment shops in the Vail Valley. For the DeChants, repurposing these discarded goods adds to the overall restorative nature of the property, resulting in a space where family and friends are invited to unwind and rejuvenate.

“All the elements here were castoffs and throwaways; something someone else didn’t want,” Doug says. “In the same vein, we feel like this is a place of restoration where you can realize your value, your worth, and you can be restored—just like all the elements here.” 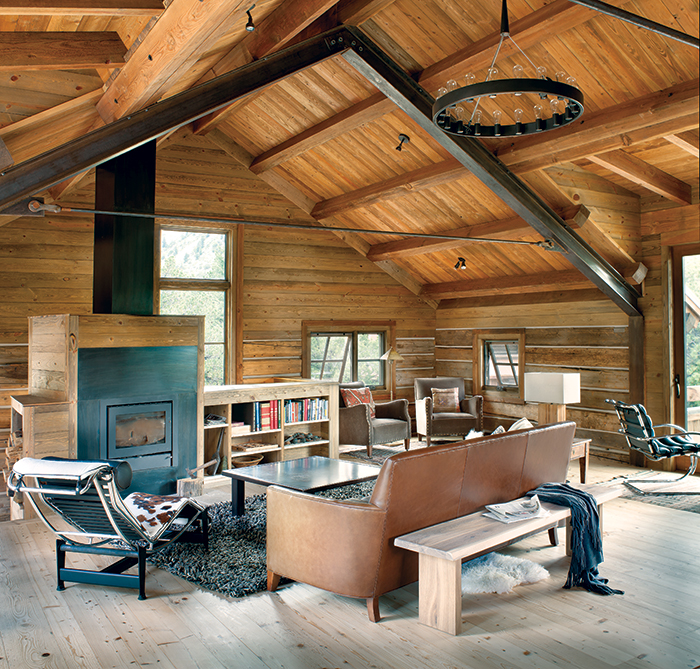 The lodge offers plenty of seating and communal space for friends and family to gather. Homeowner and architect Doug DeChant added refined steel accents to offset the rustic log structure. 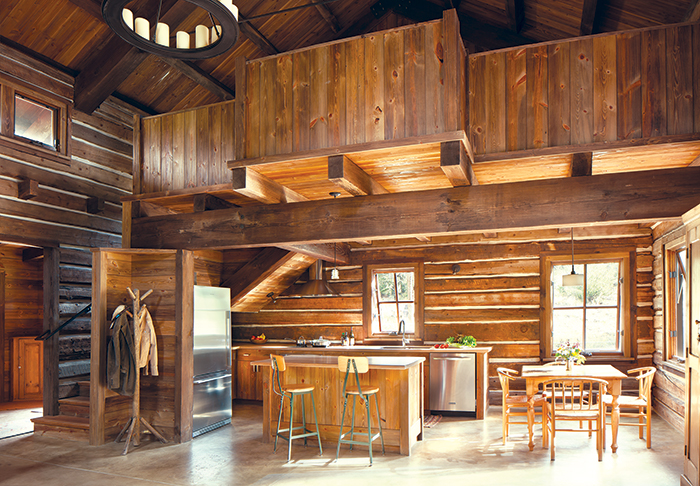 More refined, polished wood was used in the interiors to add a modern feel while still complementing the salvaged log walls. The structure above the kitchen is a guest loft. 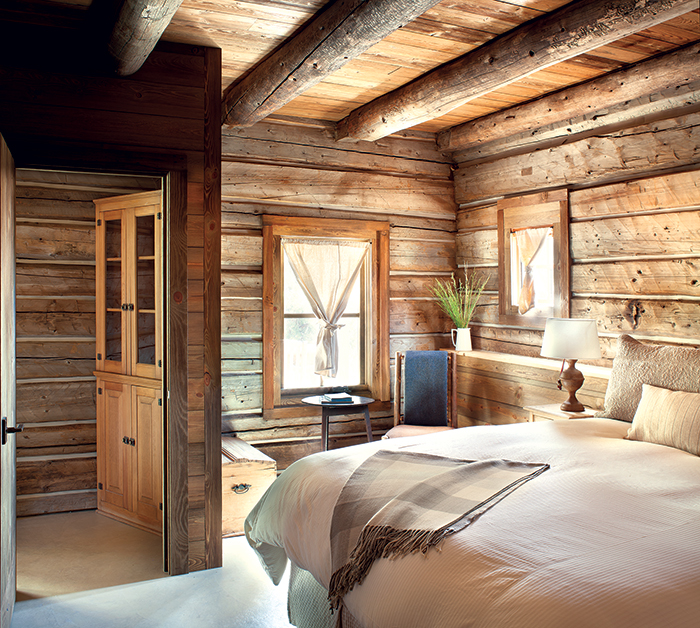 "We feel like this is a place of restoration where you can realize your value, your worth, and you can be restored—just like all the elements here." — Architect and homeowner Doug DeChant 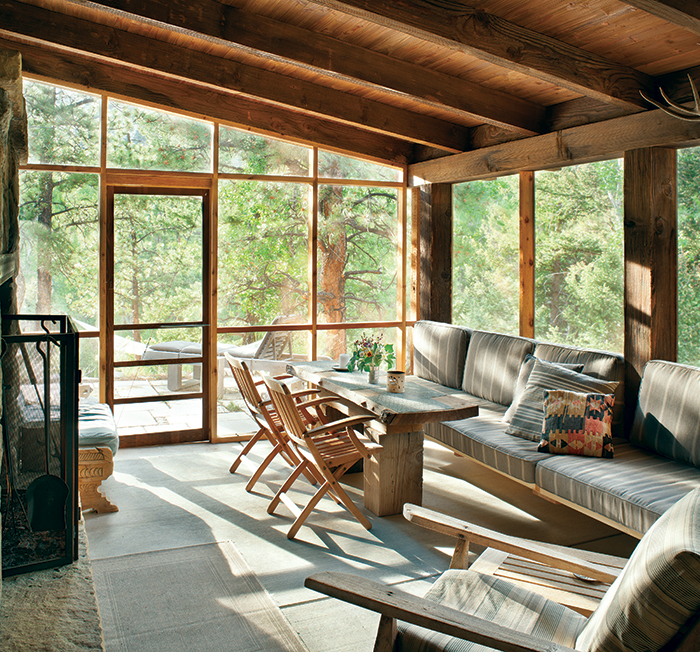 Almost every summer meal is enjoyed on the screened-in porch adjacent to the main cabin. The DeChant children sometimes even sleep out there, on the cushioned banquette. 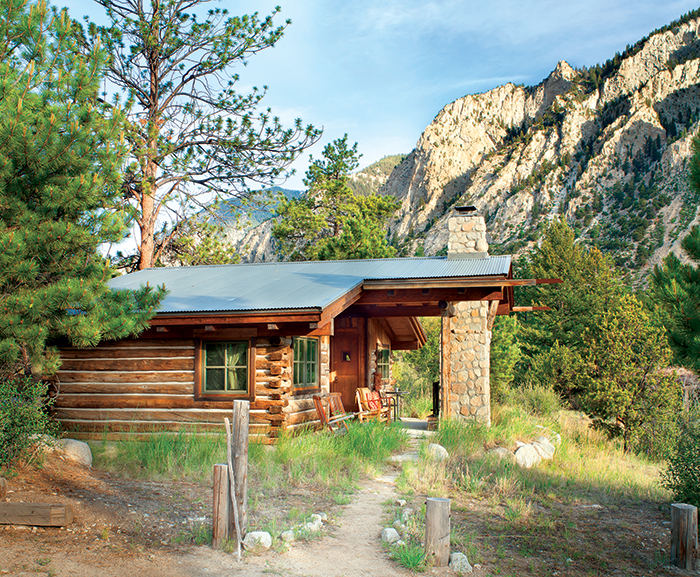 The guest-cabin duplex is clad with steel roofs that will rust over time; the stone hearth houses a fireplace and supports a covered awning under which guests can relax. 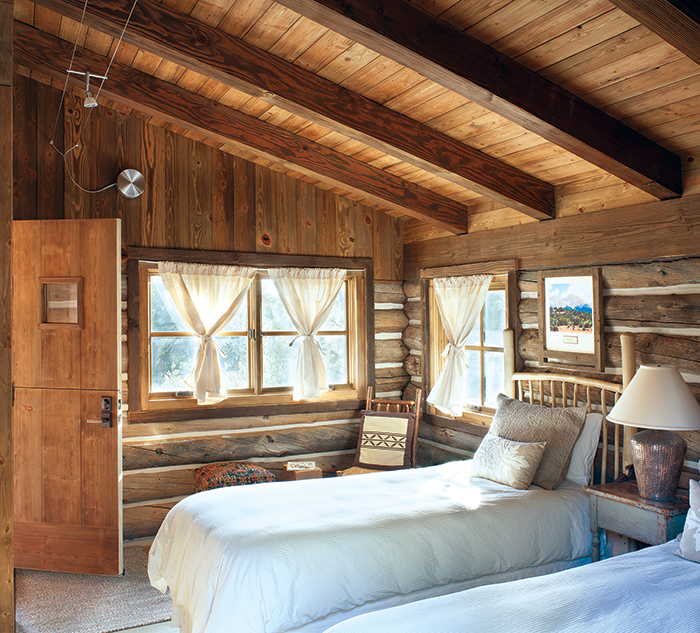 Morning light shines in through the “Angel of Shavano” guest cabin, named after a Ute Indian chief. 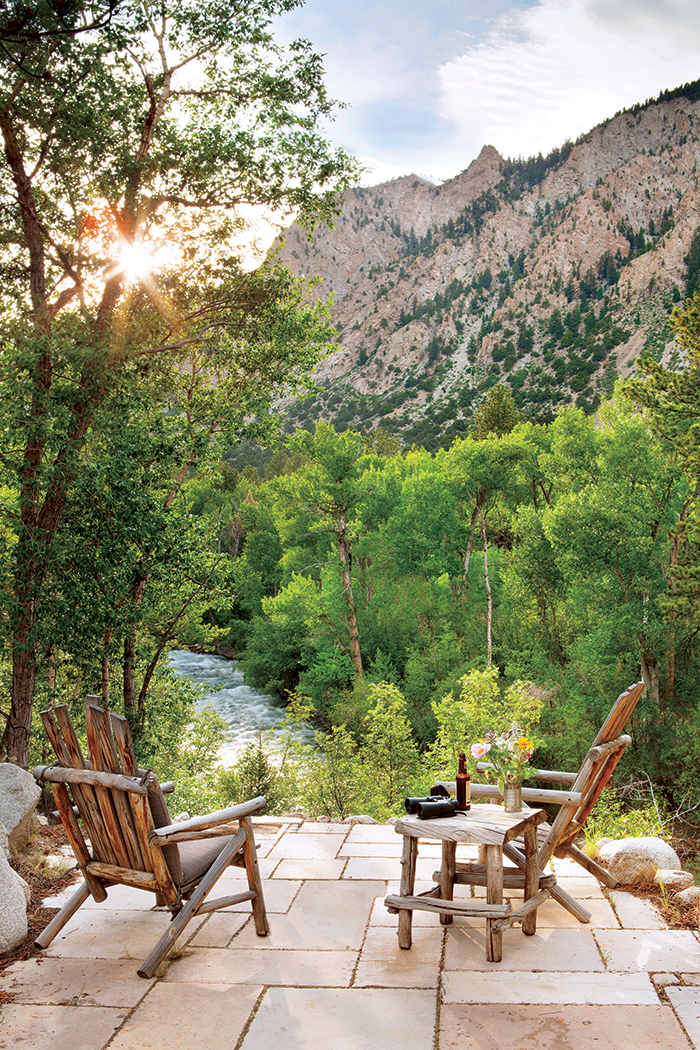 Deemed the “Listening Point,” this perch off the main cabin is a meditative space that offers commanding views of the cliffs and sounds of the rushing Chalk Creek.

From the inside out, the Wellspring cabins were built on second chances. Here’s how homeowners Doug and Charlotte DeChant saved the three historic cabins that now act as the main buildings on their property.

THE LODGE: A defunct horse barn on Miller Ranch in Edwards was headed to the landfill to make way for a new elementary school. The DeChants were given the structure in exchange for teaching a high school course on the dismantling and restoration process.

MAIN CABIN: While Doug was designing a new clubhouse on the Frost Creek golf course, he was told that a historic building was going to be demolished and buried on-site so that the third green could be built in its place. He agreed to take the cabin off their hands instead.

GUEST CABIN: While driving by a guest ranch near their property, the DeChants noticed that old log cabins were being chopped up and used as firewood. They secured one by providing the owners with a donation.

Let the House Tell You Where It's Going