A Texas Couple Creates Their Dream Home in Gunnison, Colorado

As a passion project, a couple enlists the help of architect Dan Murphy and builders Steve and Paul Pike 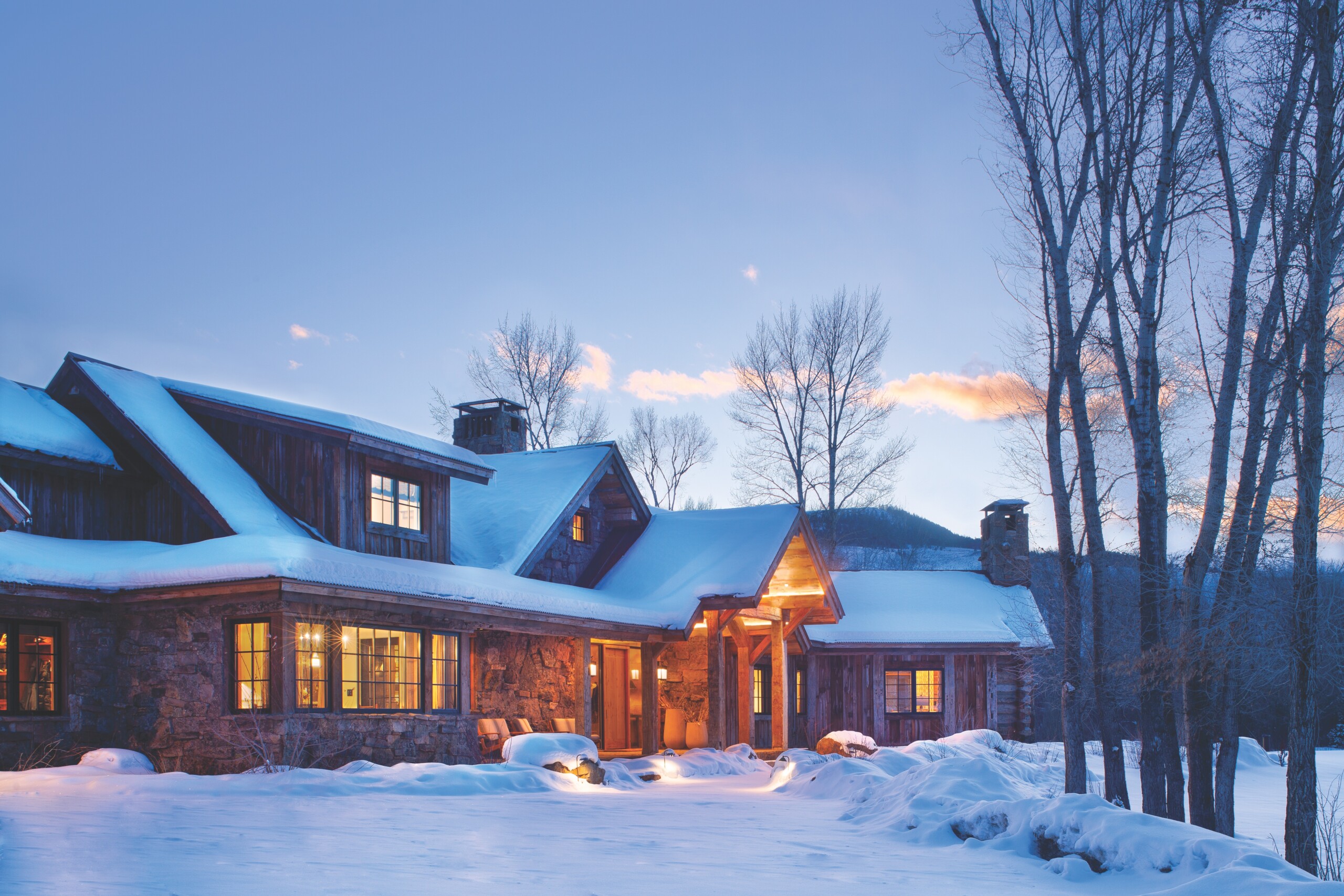 Attending camp in Colorado as a kid made an indelible impression on Jack Blake, who dreamed of one day owning a place there. Through the years, he and his wife Mary visited the area and in 2015 purchased a 35-acre parcel with spectacular views of the Anthracite Range and Ohio Creek outside of Gunnison, Colorado. “It was a true dream,” Mary says. “We fell in love.” 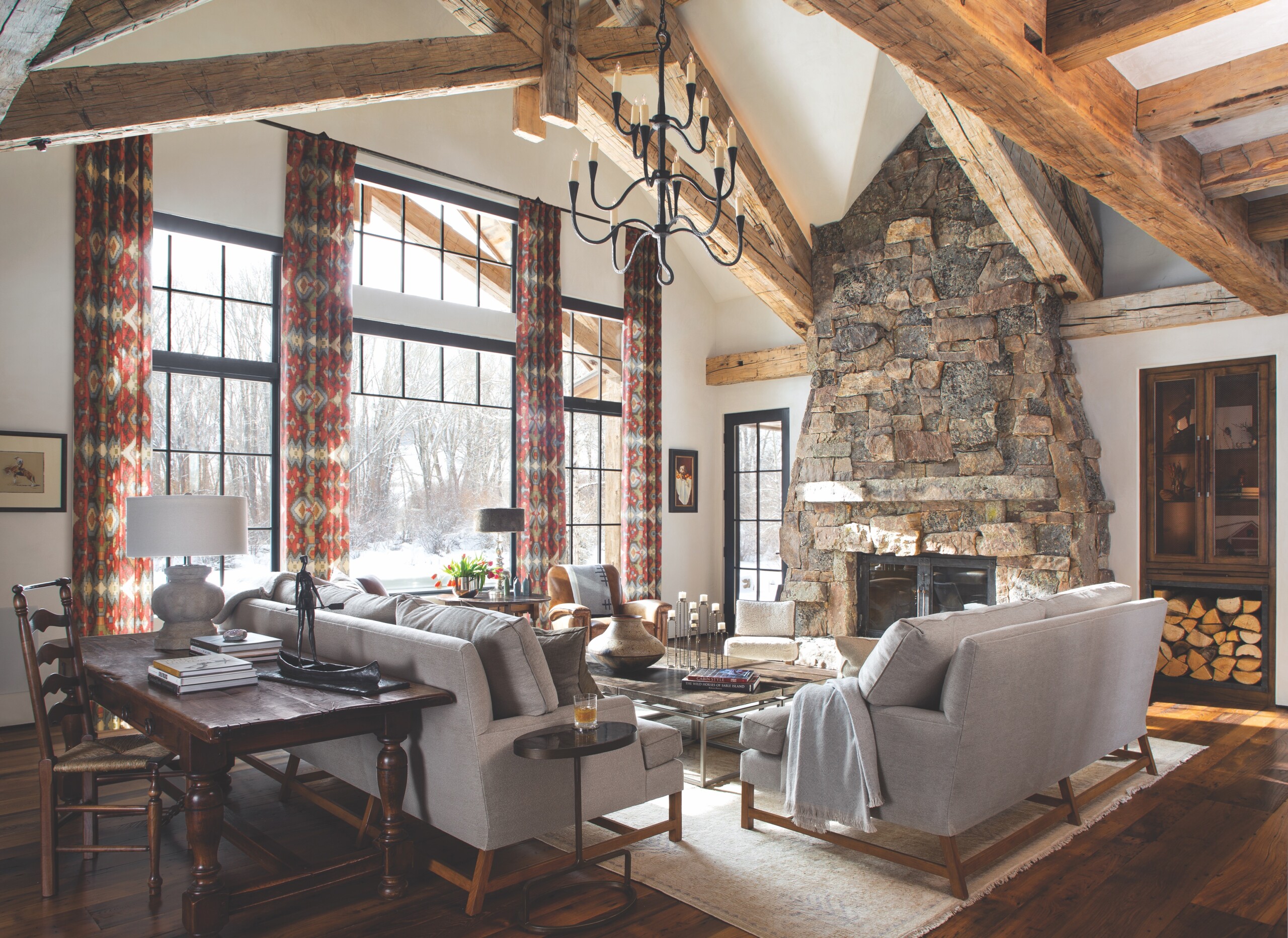 A custom-sized metal chandelier by Paul Ferrante from John Brooks softly illuminates the formal living room, where a sofa by Rose Tarlow anchors a convivial seating zone that includes a pair of low-slung chairs by Lee Industries from Columbine Showroom.

While they hadn’t intended to build a home from scratch, the instant rapport they enjoyed with architect Dan Murphy, builders Steve and Paul Pike and interior designer Carolina Alling, I.D. Studio, made the process far less daunting than they had originally imagined. All had the same advice for the couple: “Just chill out on it and let it take on its own mindset,” Mary recalls. “We didn’t feel the need to rush it.” 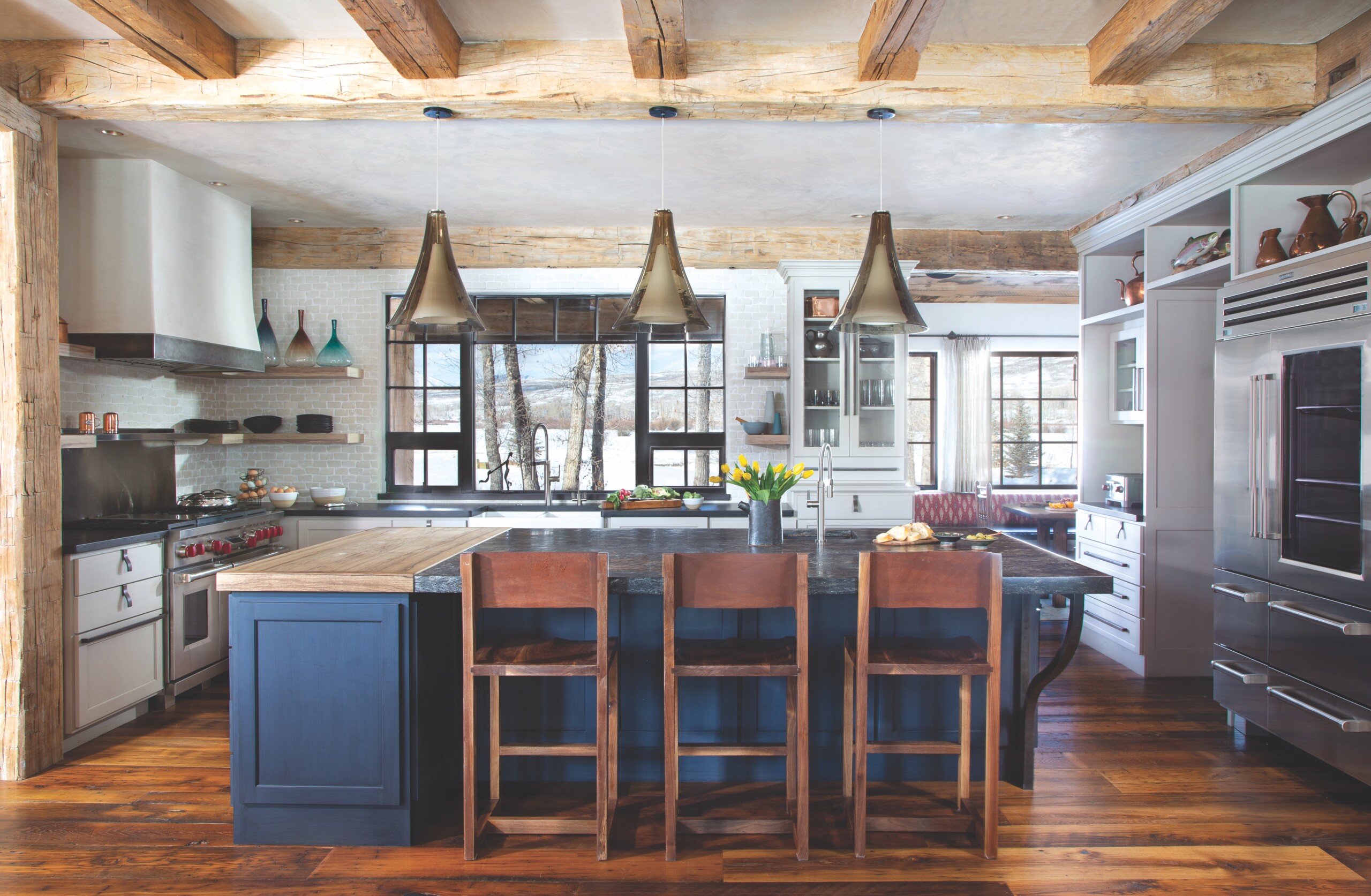 Smoked-glass pendants by Tech Lighting juxtapose the rustic beams in the spacious open kitchen. The mix of modern and rustic textures flows from floor to ceiling. With bar seating and a breakfast nook, the kitchen has ample space for entertaining family and friends.

Echoing the bend in the creek, the post-and-beam home Murphy designed is built with textural Arkansas moss rock, reclaimed hand-scribed timber and chink-and-plank walls. The rustic materials are punctuated by black metal-clad windows that frame jaw-dropping vistas in every direction. “We wanted them to see and experience the river as much as possible and this was one of those lots where we could achieve that,” Murphy says. The attention to detail also distinguishes the interior, where many of the walls have been hand-troweled with American clay, creating a living finish that changes as the sun traverses the sky. “They polish it over and over until they get the texture that the client desires,” Steve Pike explains. “It gives you a warm and welcoming feeling.” American chestnut floorboards in random widths—some as wide as 19 inches—likewise distinguish the project. 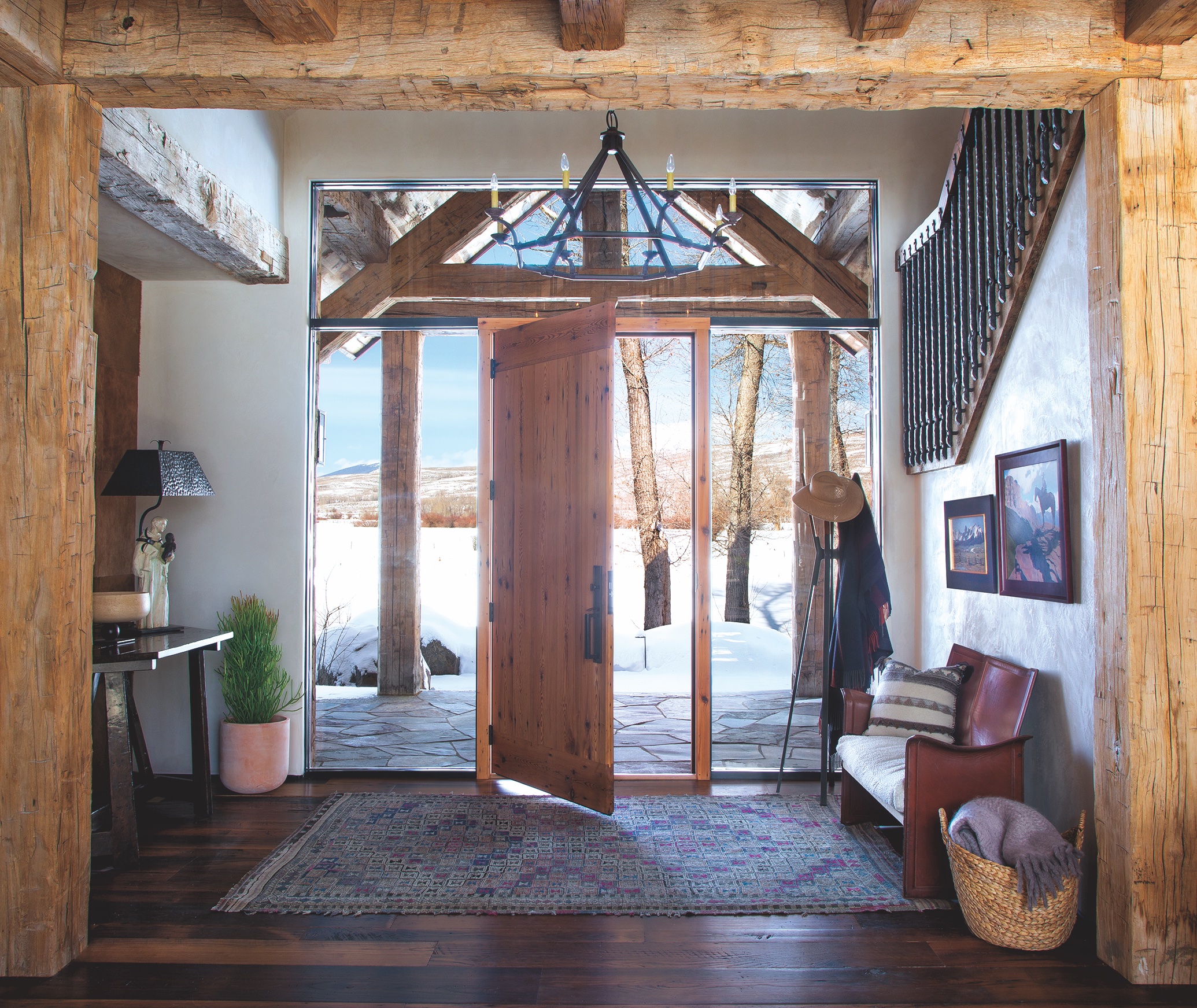 As a warming contrast to the rustic materials, Alling used materials such as grass cloth, shearling and sheepskin throughout the home. Custom cowhide tiles, for example, accent the clay walls in the foyer and mudroom. “The textures bring this house to life and create a sense of home,” she says. “We wanted to reflect the environment where this house is set.”

Developing a close bond with the Blakes during the project, Alling traveled with them to showrooms in Denver, selecting a mix of contemporary plush furnishings alongside older pieces, such as a vintage Italian bench in the foyer. “Antiques and personal items bring the space to a more personal level that reflects the clients,” Alling says. 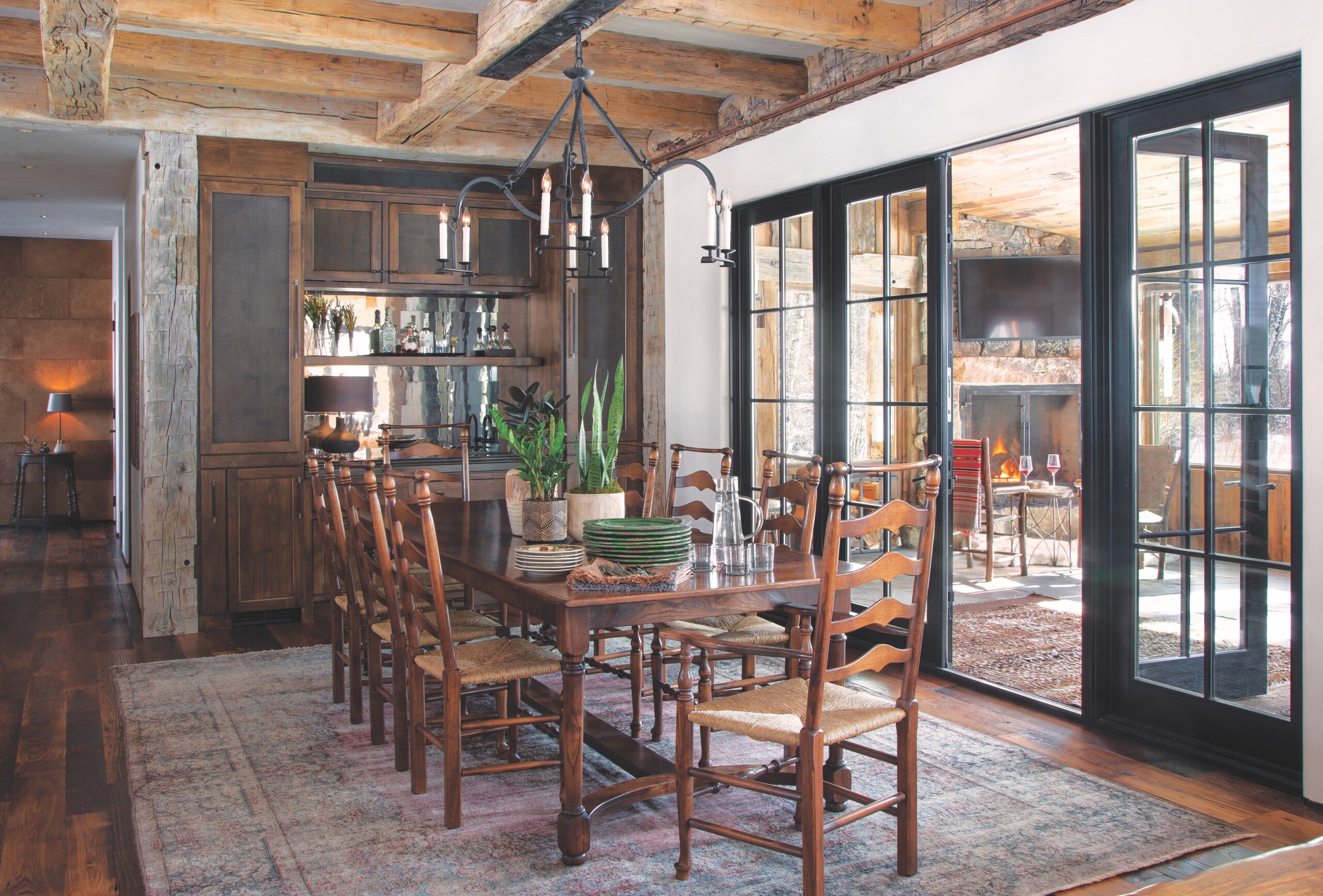 A mirrored platinum tile backsplash from Ann Sacks elevates the bar in the formal dining area.

An antique sofa table does the same for the living area. There, a floor-to-ceiling stone fireplace calls attention to the high post-and-beam ceilings while creating a dramatic focal point for a sumptuous seating zone that includes matching sofas and leather club chairs covered in a warm caramel-colored leather.

Designed with guests in mind, the bedrooms and two bunk rooms are equally well-appointed with beautiful, textural fabrics that play off the reclaimed timber. However, the primary bedroom was practically empty the first night the Blakes stayed there, cots in hand, near the end of the four-year project. “It was a fun little glamping experience,” Mary Blake says. “It was wonderful being right there by the creek.” 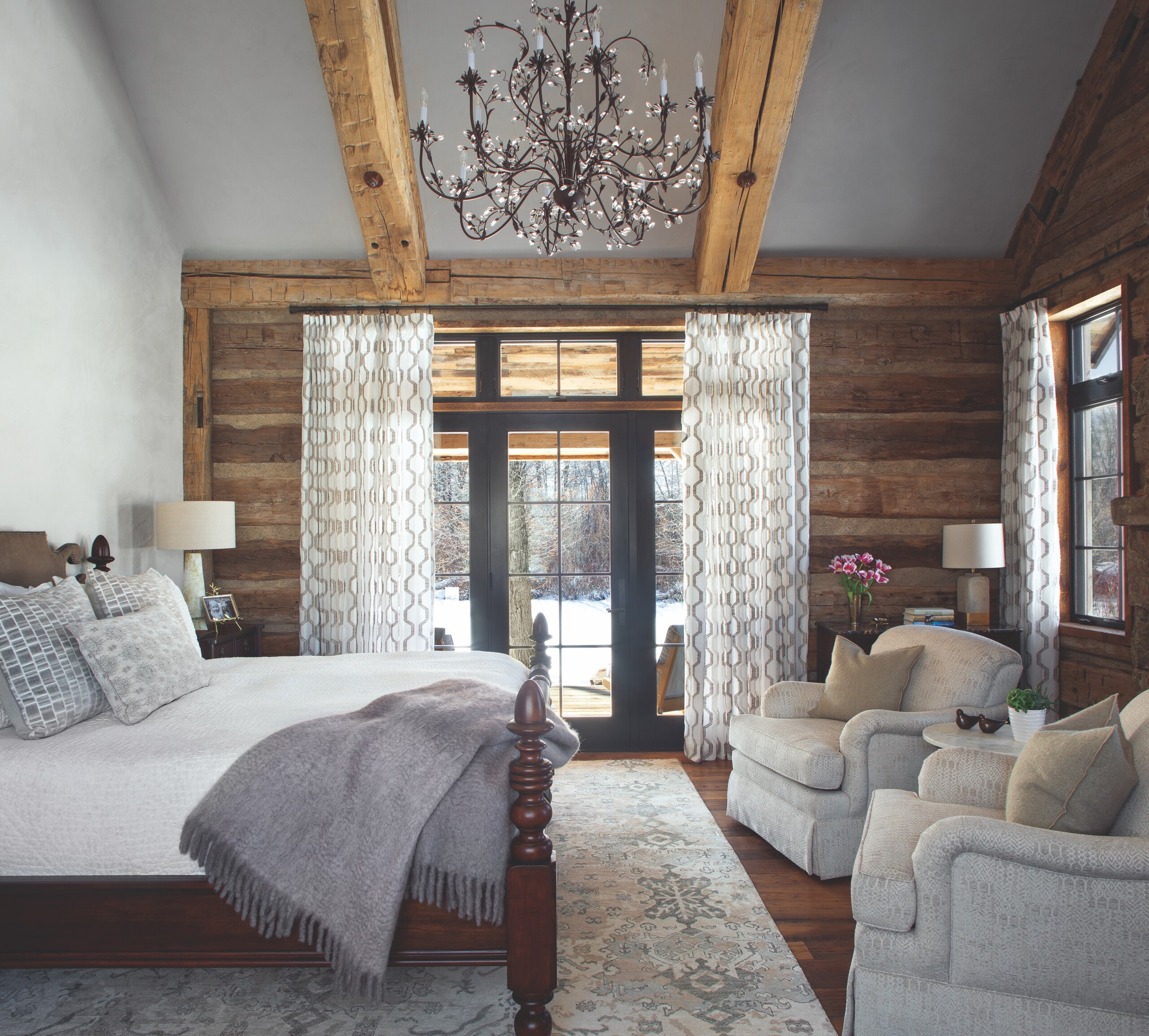 A soft contrast to the reclaimed wood elements, sumptuous bedding, drapery fabric by Hartmann & Forbes and a pair of complementary swivel chairs from Kravet contribute to the cozy milieu in the primary bedroom.

Indeed, the home’s mix of modern and rustic influences never fails to delight the owners, who spend about half the year there, often hosting family and friends for extended stays. Despite the home’s size, they marvel at the fact that it’s just as comfortable when fully occupied as when it’s just the two of them. “Every time we sit down for a glass of wine, we look around and pinch ourselves,” Jack Blake says. “It hasn’t worn off.”

“We’re so proud,” Mary adds, noting they owe it all to the designers and skilled craftspeople who spent so much time on the project. “The end result surpassed our dreams.” 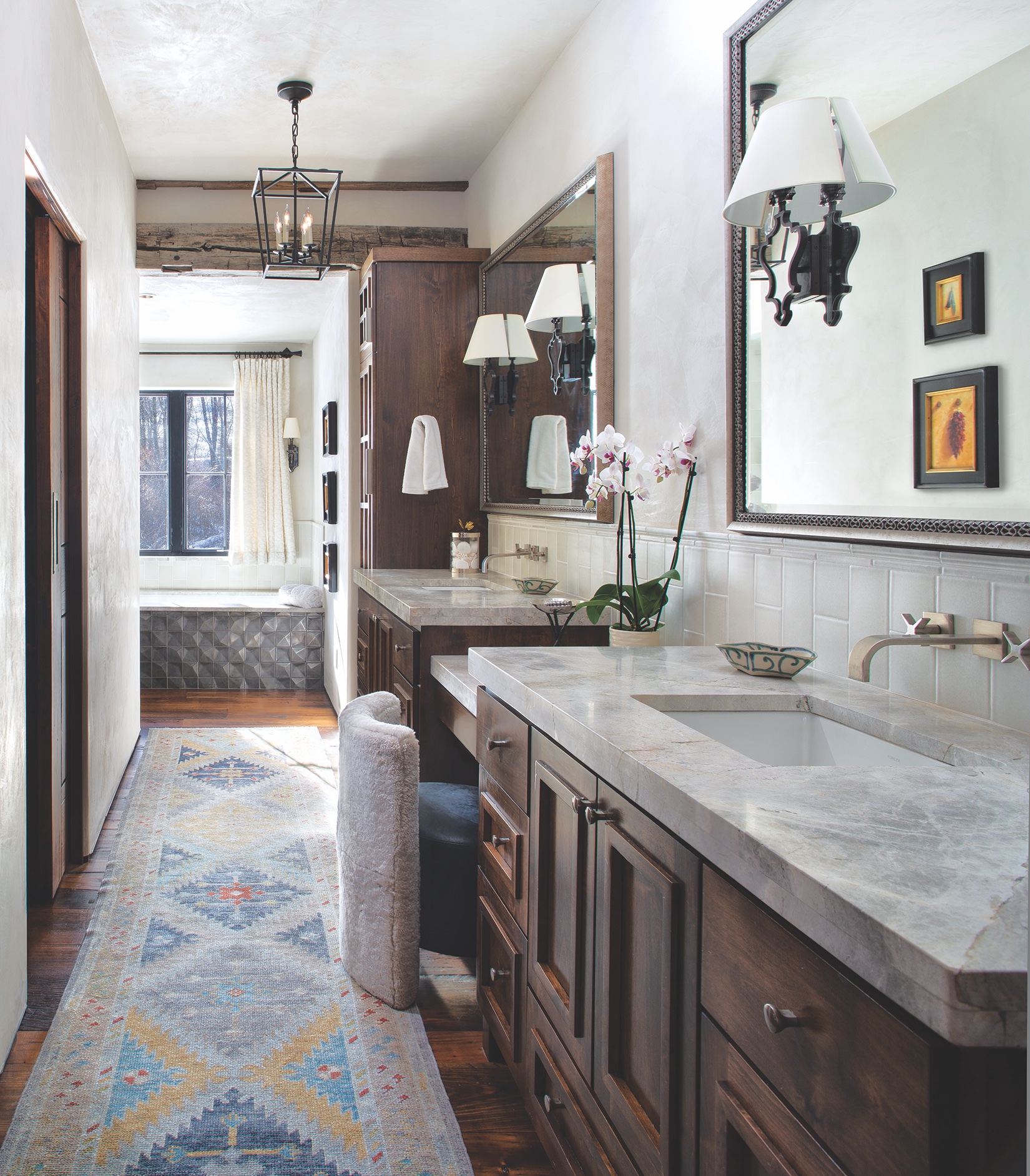 WARMTH AND TEXTURE Despite the Mountain Modern home’s soaring ceilings and generously proportioned spaces, interior designer Carolina Alling of I.D. Studio created an eminently cozy milieu that owners Jack and Mary Blake never take for granted. To that end, the designer incorporated warm colors and textural fabrics. For example, the stone fireplace in the living room is surrounded by a cozy furniture grouping that includes shearling slipper chairs and matching sofas upholstered in a Perennials fabric aptly called Touchy Feely. “Everything is designed so it can be used and touched,” Alling says. “This house represents calm and provides a sense of home.”

In the same spirit, custom hide tiles accent the American Clay walls in the front entry and mudroom areas. And warm area rugs cover the reclaimed chestnut floors in the main living areas and primary bedroom, which has high wood-beamed ceilings and walls covered in a mix of timber and American clay. Wall-to-wall carpet likewise creates an enveloping feeling in the guest suites and bunk rooms. “Sometimes tall ceilings can feel kind of cold, but every space in this house sort of hugs you,” Alling says. “I was so gratified to see how it all came together.”