A modern take on a Montana tradition, inspired by the music of a cascading creek

The creek was like a lullaby. And the Texas couple wanted their new retreat to cozy up beside it. They had considered other building lots in Deer Lodge, Montana’s, Rock Creek Cattle Company—a 30,000-acre working ranch and residential community with world-class golf and private club amenities—but they were won over by the sights and sounds encountered on this narrow ridge overlooking the water. “You hear the creek and it’s like Mother Nature’s giant sleep machine,” says the homeowner.

Their architect—Jesse Vigil, of Missoula-based CTA—agreed. “You get a really nice babbling creek sound, and we wanted to make sure we captured that throughout the house,” he says. But the constraints of the location, rising above a horseshoe bend of the creek on one side and hemmed in by a road on the other, required some design ingenuity. “It was pretty spectacular, but it was going to be a little bit of a difficult site,” Vigil admits. “We knew that all of the views would mainly be out the back side of the house while we were trying to protect the front side of the house,” he explains. “And our building envelope was very narrow to stay on top of that little hogback. 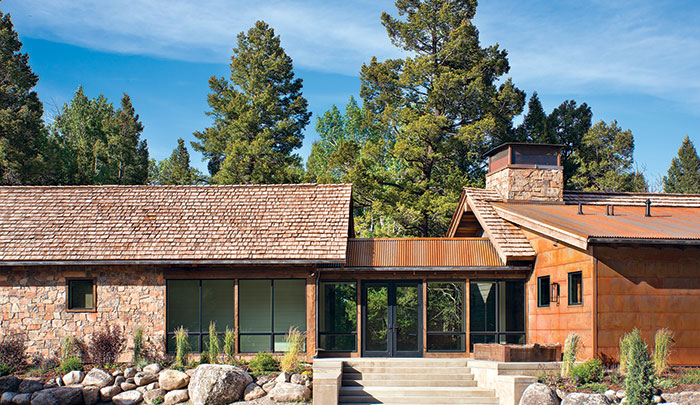 The resulting slender, 2,642-square-foot, single-level home is “kind of a redefinition of a cabin,” according to Vigil. It follows the contours of the topography, divided into two sections—kitchen/dining/living spaces on one end, bedroom suite and office on the other—connected by a breezeway. Clad in locally quarried Montana moss rock and cedar shakes, with a gradually rusting COR-TEN roof, the home blends easily into the surrounding landscape. Vigil explains, “We tried to pair clean, simple-line detailing with some rustic materials for a fresh take on Rocky Mountain rustic style.” 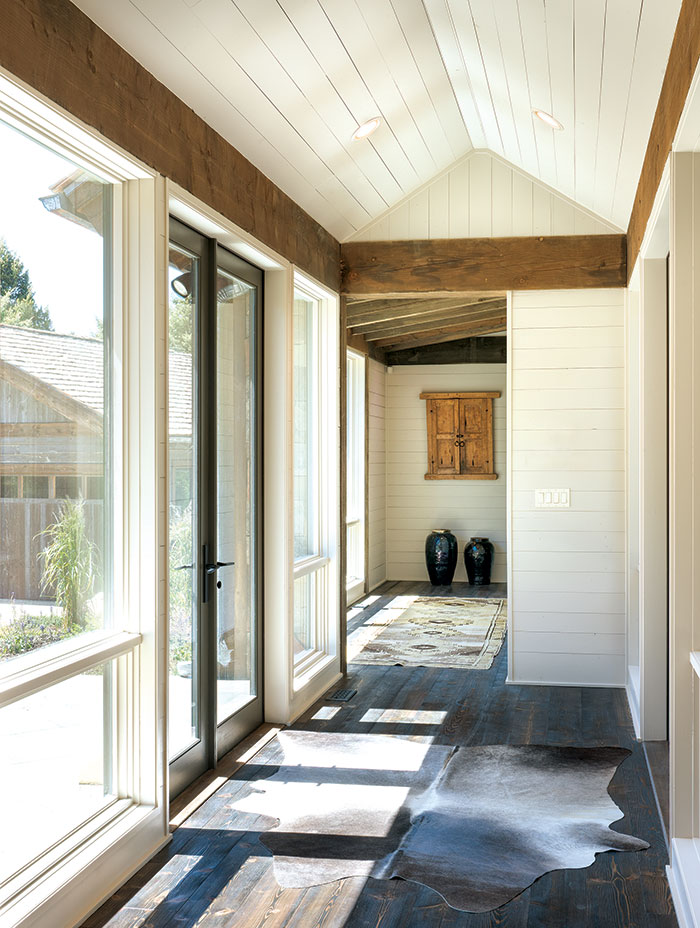 Natural light pours into the home through floor-to-ceiling windows. 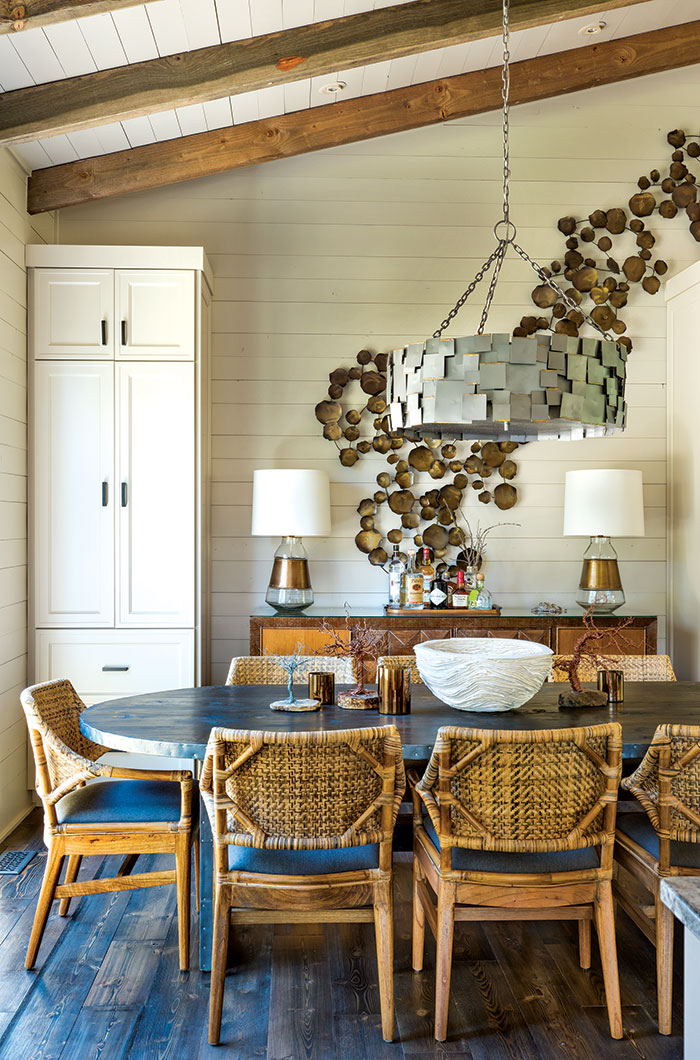 The custom zinc-and-wood dining table is surrounded by Kentucky arm rattan chairs by Palecek. “Everybody gets an arm,” remarks interior designer Carter Kay. “And that’s fun, especially in a vacation house.” 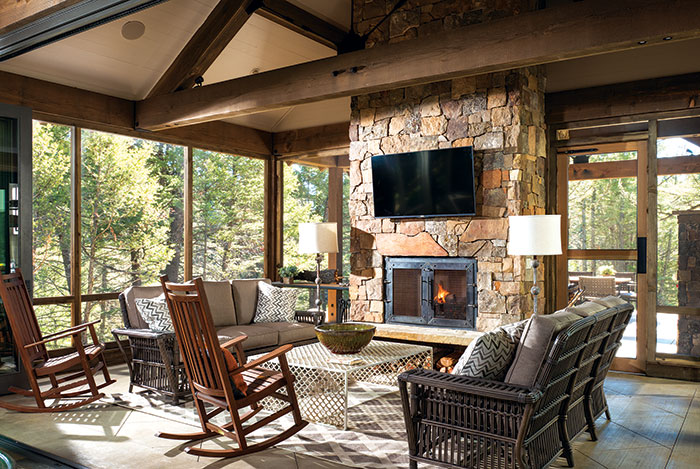 Rattan sofas and ipe wood rocking chairs offer laid-back comfort on the screened porch, where the stained-and-scored concrete floor is covered by an indoor-outdoor rug.

Thanks to huge windows and retractable glass doors, there’s an open-air feel. “The most fun thing about the house is the screened-in porch,” the homeowner says. “When there’s nice weather, you can open up the folding glass doors and then all of a sudden you’ve got this indoor-outdoor space. It’s kind of a wow factor.” Vigil agrees: “It definitely doesn’t feel like a traditional, stuffy cabin.” Three additional patios provide ample outdoor seating and living space, as well as views of the babbling Rock Creek nearby. 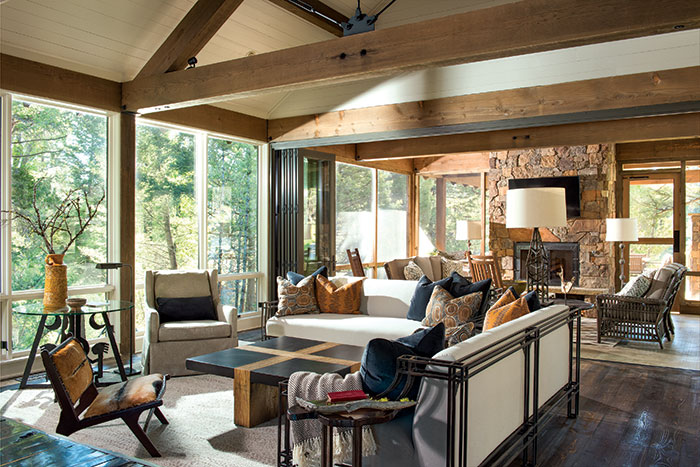 “You get all the windows open and the doors open and you hear the creek, and it’s like Mother Nature’s giant sleep machine.” — The Homeowner

When it came to choosing an interior designer, there was no doubt: Atlanta-based Carter Kay, of Carter Kay Interiors, is an old school pal of the homeowners, and over the years she’s helped the couple with numerous projects. “She showed not one lick of design talent when we were in college,” the wife affectionately wisecracks. As former roommates, the two women have the easygoing rapport of longtime friends, so decisions were straightforward. Kay describes her instruction: “Go ahead and just do it. I know it’ll be good.” 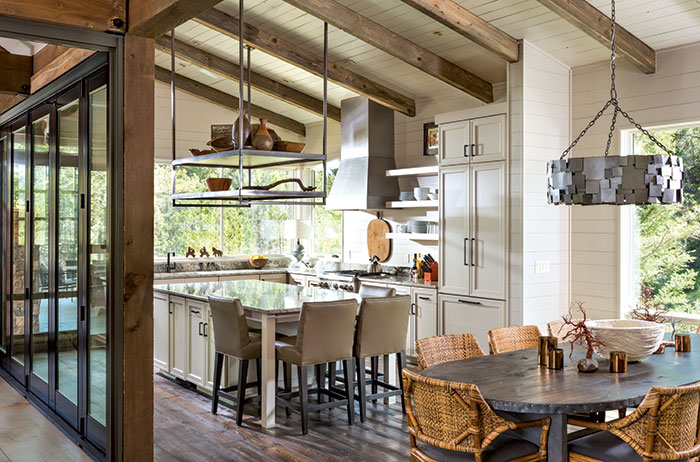 Dark wood flooring, aged Douglas fir beams, and horizontal-boarded walls painted with Benjamin Moore’s Clay Beige create an updated rustic look in the airy kitchen. “Even though it has clean lines and sharp edges we wanted to soften that and give a very livable feel to the house,” says Vigil. Kay avoided upper cabinets in favor of handy open shelving, and the island was designed with friendly face-to-face seating.

Taking advantage of the bright wash of natural light, Kay and her associates—Nancy Hooff and Catherine Branstetter—created a clean, neutral setting that avoided antler-centric Montana ranch clichés. Kay says, “It’s a combination of midcentury industrial with the use of natural materials. It’s almost lofty, like an old warehouse that’s been transformed.” The color palette echoes the hues of the home’s exterior. “Knowing the architect was using rusty colors of stone and metal, we thought we’d pull that inside, along with a putty-gray color,” she explains.

The home is as easy and comfortable as a summer day. “It almost feels like you’re in a spa setting,” says Vigil. “That view and that sound add to the tranquil feeling.” The homeowners have found their perfect summer getaway: “It’s a great place to gather and entertain, to be with friends and listen to the creek and have dinner.” 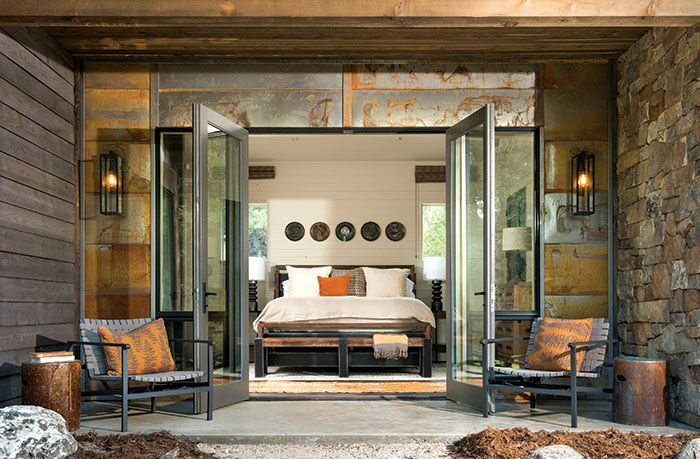 A gorgeous patina of rust transforms steel panels into an art wall on the bedroom’s private terrace. It’s an ideal spot for morning coffee, with comfy low-slung Flex chairs from Brown Jordan. The wood-and-steel Sean King bed is by Four Hands. 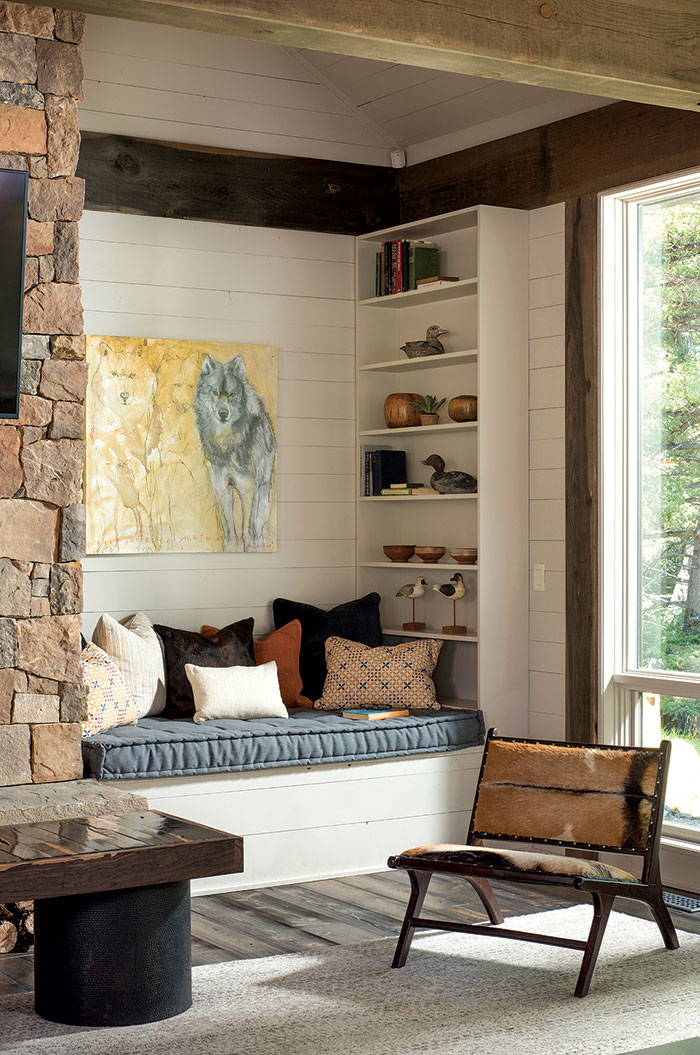 An inviting reading nook is just the place for a daydream, with built-in shelves for treasures scavenged on woodland walks.

SEE ALSO:
The Magic of a Screened Porch
A Summer Camp Home Where the Living is Easy
A 1,750-Square-Foot Cabin
SaveSaveSaveSave