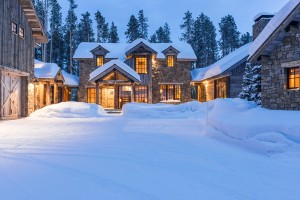 This modern take on cabin life is located in a dense forest of towering lodgepole pines. Crafted from reclaimed timbers and stacked Montana moss rock the series of structures are connected by glass corridors. | Photography by Audrey Hall

The concept of bringing the outside in and making the natural environment part of the interior living experience has become an expected part of residential design especially in places like Big Sky, where 10,000-foot peaks are part of the everyday scenery and Yellowstone National Park is in the hood. It was certainly on the mind of principal Paul Bertelli, JLF Architects, when he crafted a series of structures for a couple— they split their time between European cities and Montana—on a densely forested lot tucked at the end of a road in the Yellowstone Club. But on equal footing was establishing spaces that look inward to promote a feeling of coziness and security. “The homeowners were enamored of the property the first time they saw the site,” shares Bertelli. “But internally, they wanted a sanctuary.” 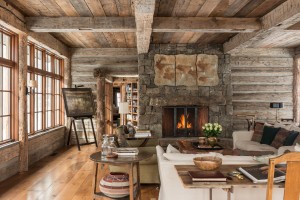 Stacked stone laid up in the traditional manner, chinked log walls, and the texture of hand-hewn beams that span the living area ceiling lend an air of authenticity to the new structure. Contemporary elements like expansive windows don’t detract from the home’s approachable ease. | Photography by Audrey Hall

From the outset the homeowners embraced Bertelli’s notion of a cabin in the woods, and rather than one outsized 7,500-square- foot residence, the architect introduced three more approachable components all linked by reclaimed materials, the latter meant to imply a 19th-century homesteader history. Outside, details like multiple rooflines create the feel of an original structure added onto through years and generations, and inside, the texture of hand- hewn beams that span the living area ceiling reinforce that idea. 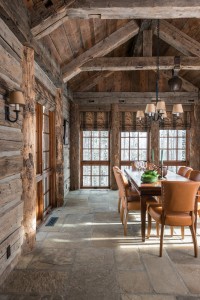 In the dining room, interior designer Catherine Lane add- ed the stripe-and-paisley shades as complements to the wood table and leather chairs from the homeowners’ collection. | Photography by Audrey Hall

Project manager Todd Smith of OSM strove to maintain that historic authenticity in the workmanship as well as the materials. Pointing to mortise pockets visible in many of the old beams, he says, “We don’t just cover those pockets, we insert end grain to match the beams. Even the patches have to look authentic.” 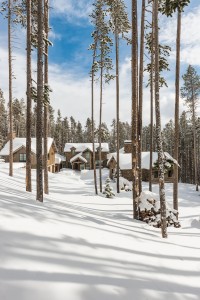 That dedication is further punctuated with stacked stone walls and fireplaces laid up in the traditional manner with classic stone details. “The massing is so important that when you look at a wall with a window you see how thick that wall is,” says Bertelli. “What you don’t see is the supporting masonry component hidden be- hind that wall that meets 21st-century code requirements.” The size of the divided-light windows, like those in the dining room and kitchen that capture curated views 20 miles down valley, are an- other concession to modern times. 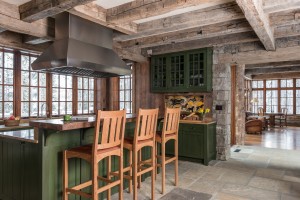 Kitchen cabinets are perfectly matched to the surrounding greenery. | Photography by Audrey Hall

“Homesteaders could not transport glass pieces bigger than 6 x 6 inches.” 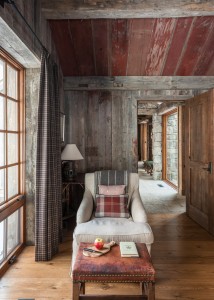 Composed largely of lodgepole pine harvested from the site, moss rock from Harlowton, wood from a 100-year-old timber frame barn and repurposed remnants of an old cottage, the central building containing the shared living spaces and guest bedrooms is flanked by a garage and art studio on one side and a distinct log cabin/primary suite linked to the main house by a glass corridor on the other. Not unlike their predecessors who once carted their treasured possessions across the country in covered wagons, the homeowners came to their site with a curated selection of furnishings and antiques—many gathered while living abroad—that fit perfectly in the rustic surroundings. 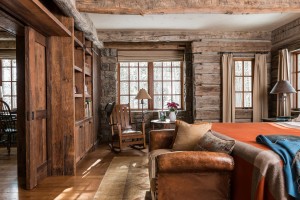 The layering of textured throws, bedding, pillows and rugs in the owners’ bedroom adds to the casual elegance of the space. | Photography by Audrey Hall

“The homeowners wanted to manifest the uniqueness of the outdoors and Western style,” says interior designer Catherine Lane who achieved this by mixing old and new furnishings, rugs, art and accessories to create a timeless, lived-in feel. The green, tan, eggplant and red color scheme is courtesy of Mother Nature. A sage green wool check that contrasts with the hand-hewn timbers, for example, lines the hallway walls leading to the den, and the stripe-and-paisley fabric used on the dining room roman shades has tones of sage green, rust and cream, which further respond to the variations in the wood. “Everything came together to complement the recycled materials and stone used in the design and architecture of this beautiful home.” 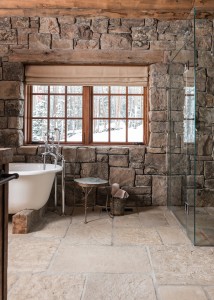 A freestanding tub invites relaxing soaks, and the glass- enclosed shower is a nod to modern life. | Photography by Audrey Hall

Most people are familiar with the adage “God is in the details,” which is meant to serve as a reminder that when a job is done right, even the littlest things are important to a successful end result. For this version of a cabin in the woods, a balance of authentic materials and modern technology contributes to the winning outcome.

LOCAL INFLUENCE In keeping with the surrounding vernacular, all vertical elements are lodgepole pine—much of it harvested from the site. “We were very cautious about regionalism and making sure the buildings look like they grew out of the landscape,”says design principal Paul Bertelli. FAKING IT Pioneers filled the space between the logs in their homes with mud or clay, and while the look of chinking is pleasing, such materials are impractical against the elements. Here, engineered chinking provides a modern solution with the right look. “It reflects traditional methods but it’s the 21st- century version of a log wall,” Bertelli says. MELDING NEW WITH OLD Seamlessly interjecting large sheets of glass into the old stone floors and walls to create a shower enclosure mandated high-level craftsmanship. “There’s no frame, and no transition material,” says project manager Todd Smith about the stunning addition to the main bath. “The glass is just pierced right through the stone.”

A Colorado Home Decked Out for Christmas