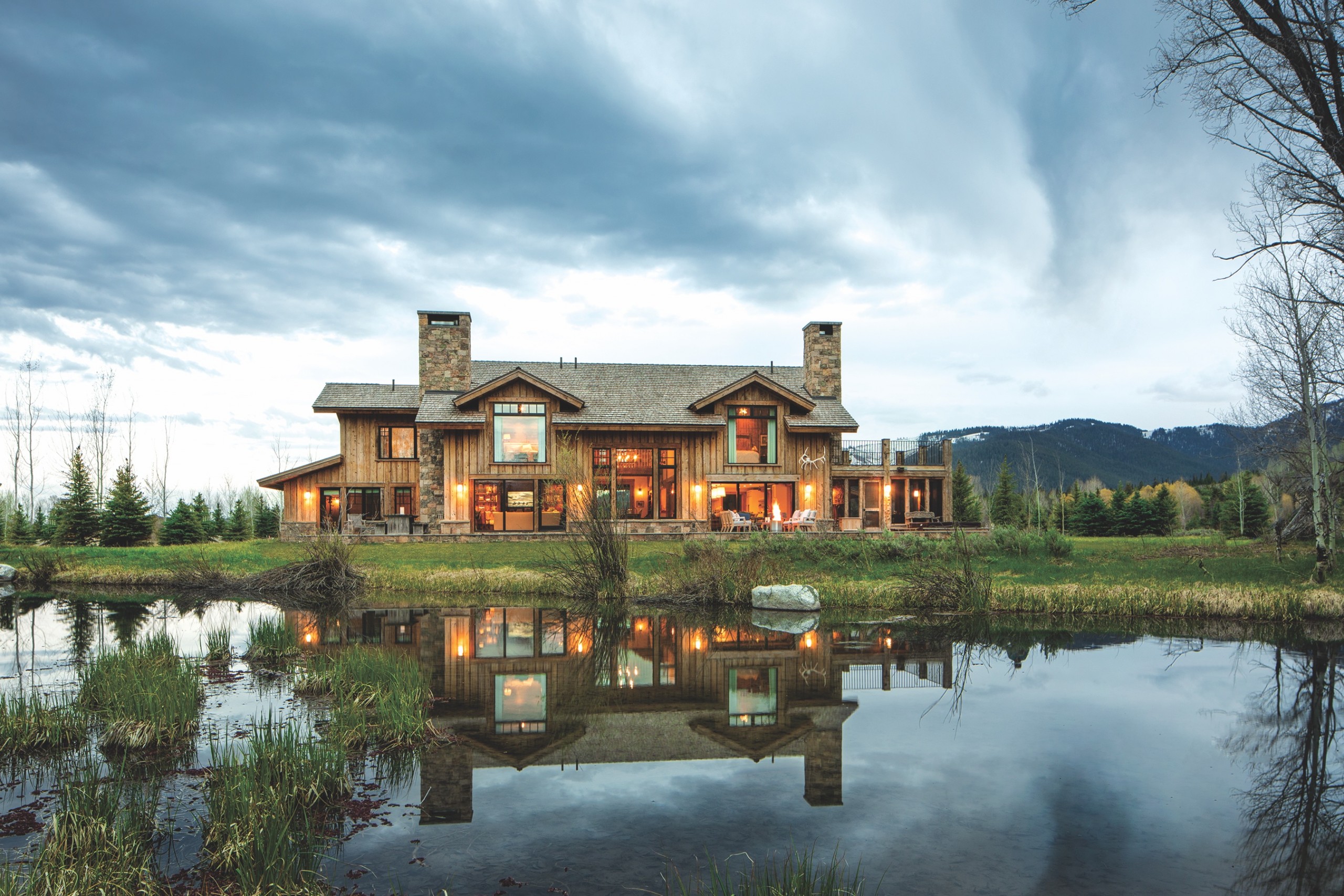 John Holland has always been drawn to barns, which he calls the centerpiece of pastoral living. “Some of my best childhood memories are … being on the family farm,” he says, remembering summers on his grandparents’ western Massachusetts farm. “My brother and I would spend hours exploring and playing in the barn.” 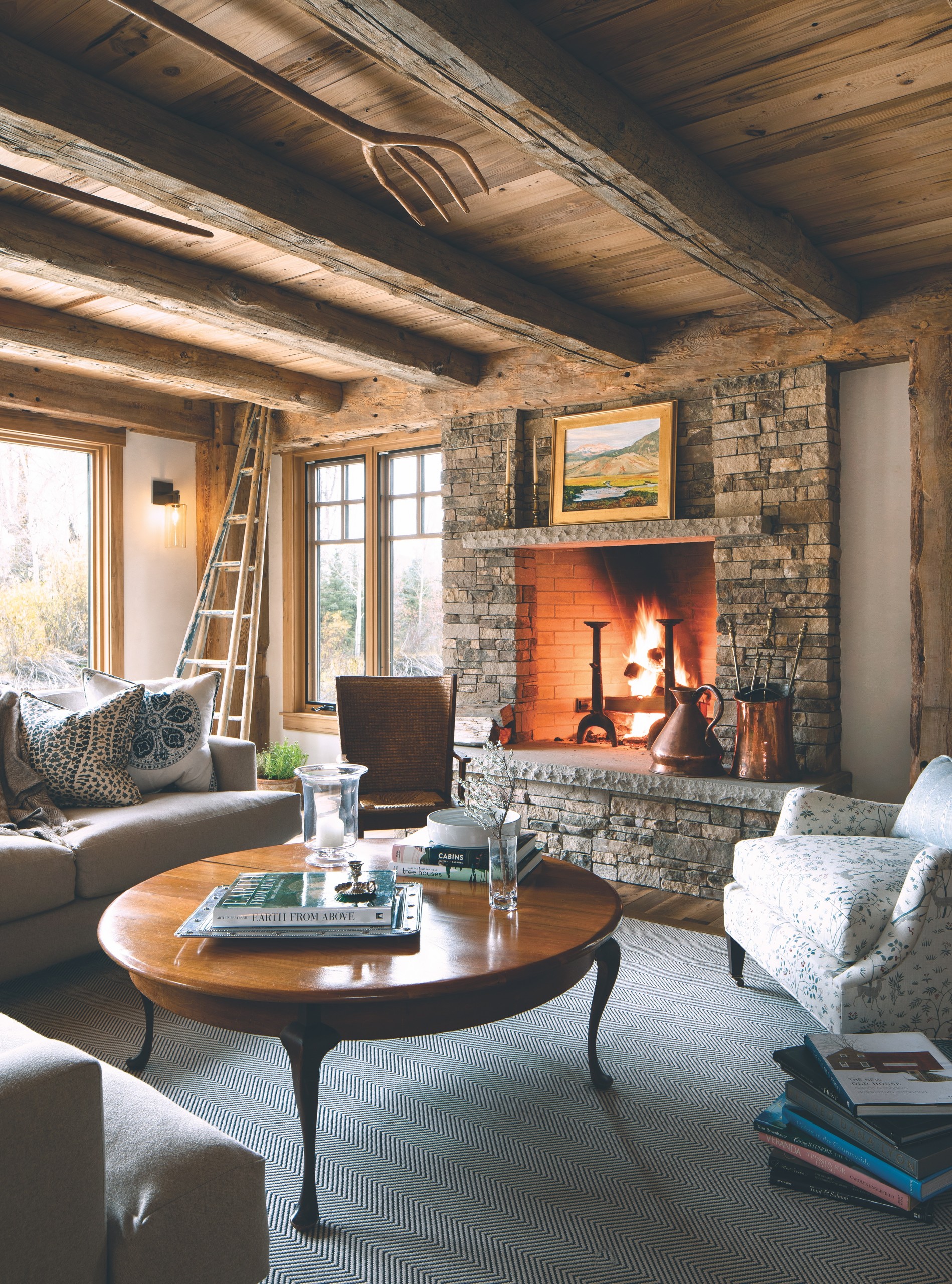 The library with its blazing fireplace and cozy seating is a favorite gathering place in winter.

So, when it came time to build a “forever home” for his young family, of course, it was going to be a barn. But not just any barn—a big, perfectly pre- served 19th-century barn from upstate New York’s Mohawk River Valley. “One of the practical considerations was that this barn was already built for epic snow loads,” Holland says, “so we knew it could withstand the winters in Wyoming.” 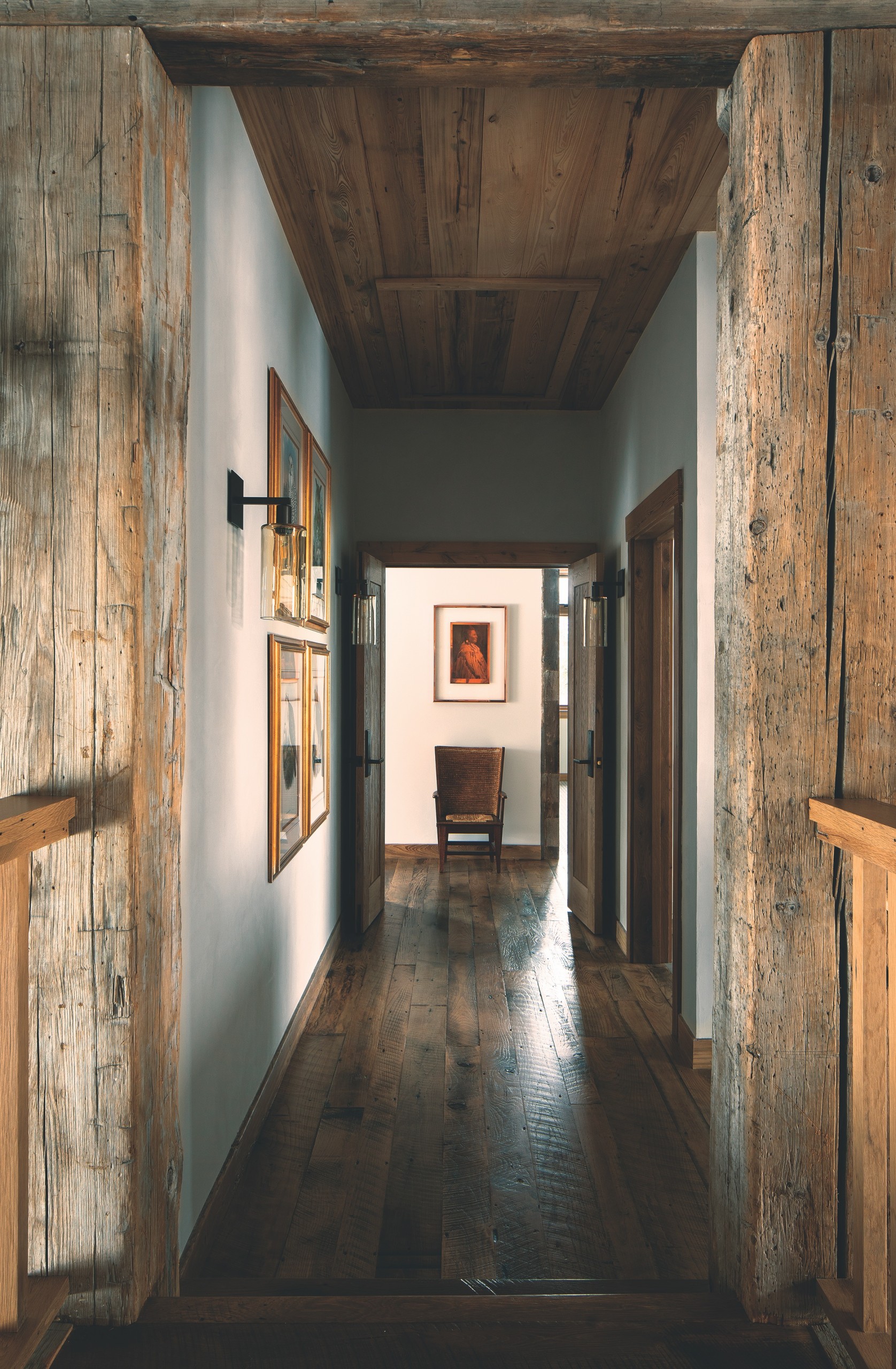 Holland is originally from Nantucket, where his family has an antiques business (Nantucket House Antiques). He met his wife, Shelley (a West Coast native), in San Francisco. Together they moved to Jackson, Wyoming, to fish and ski and where they founded Old Growth LLC to purchase and preserve the historically significant Coe Cabin-Sweetwater Restaurant. Shelley was also part of the Terra Resort Group team that used recycled and renewable materials for building Hotel Terra, Wyoming’s first LEED Silver-certified hotel. “Our creative instincts were—and have remained—remarkably in sync,” says John Holland. “I’m more of a historic preservationist; she’s more of a green-and-sustainable person. 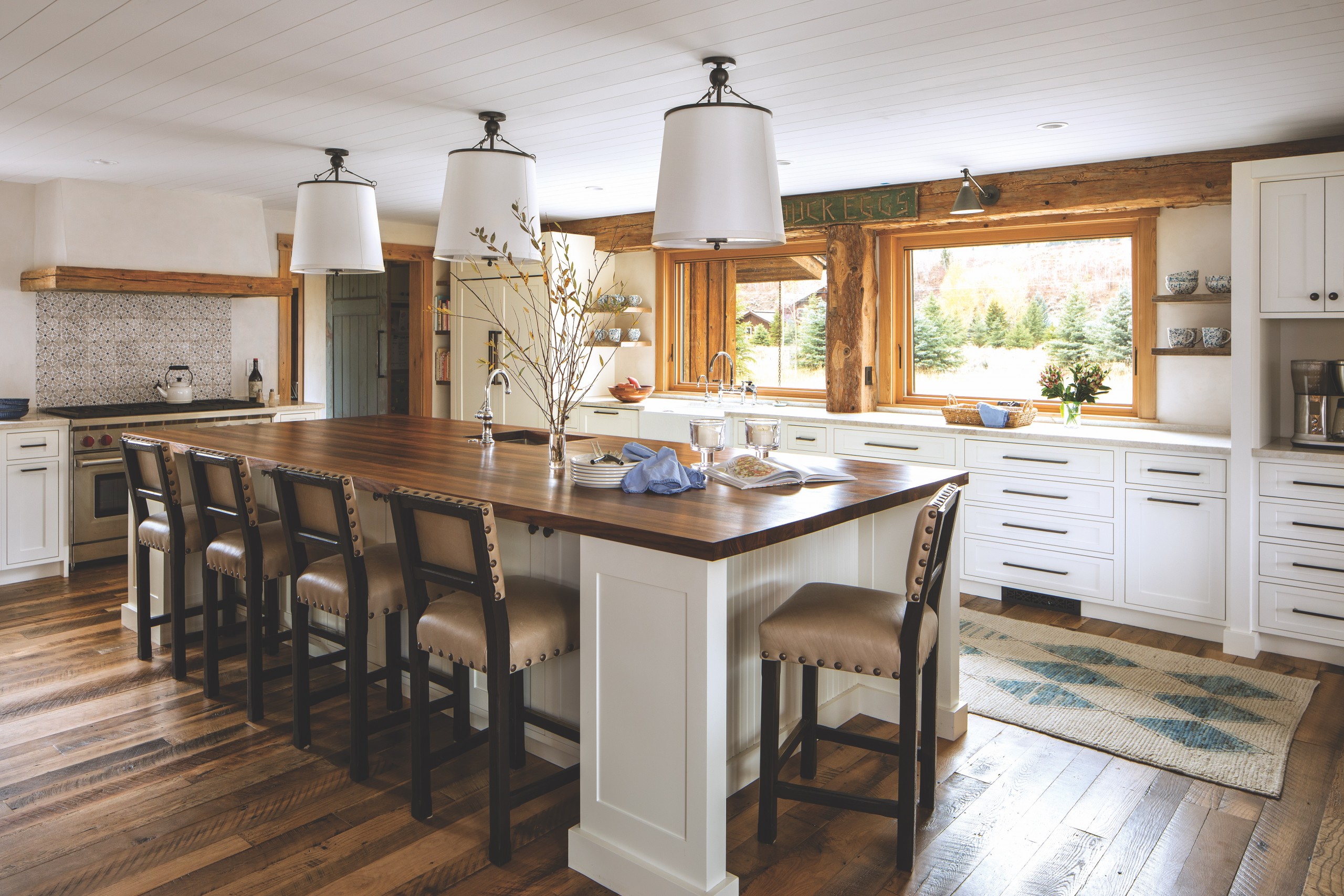 Once the Hollands acquired the barn, had it dismantled and shipped, they assembled a creative team with whom they had worked on other projects. Architect Eliot Goss was enticed out of retirement. “I thought I was retiring to focus on my painting, but John can be very persuasive,” he says. “Fundamentally, he was asking me to take the heavy-timbered structure of a 200-year-old barn and create his family home around it.” 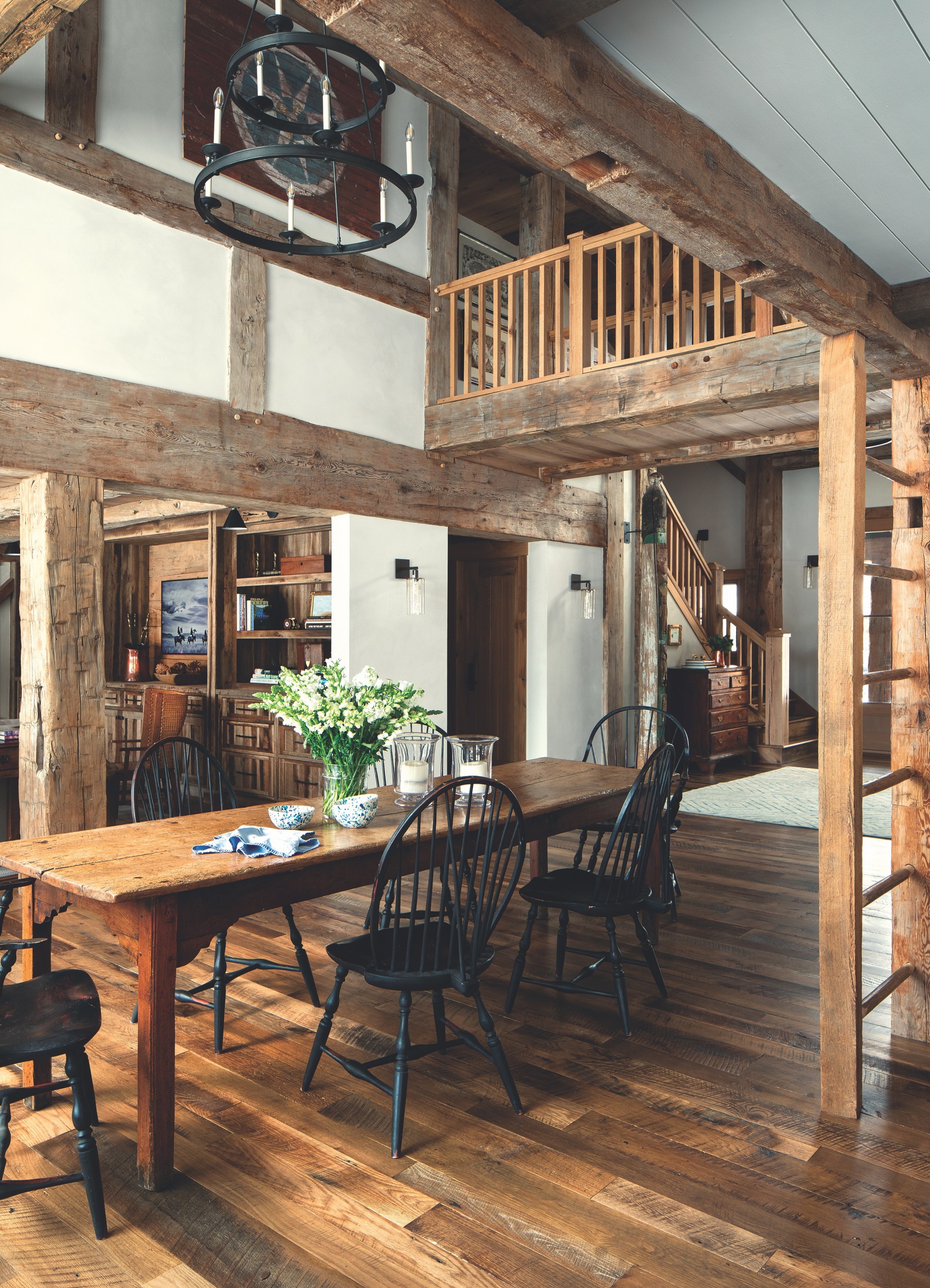 The rectangular center bay with its 28-foot ceilings is open-plan. A sycamore table (from Holland’s parents’ Nantucket home) comfortably seats 10. 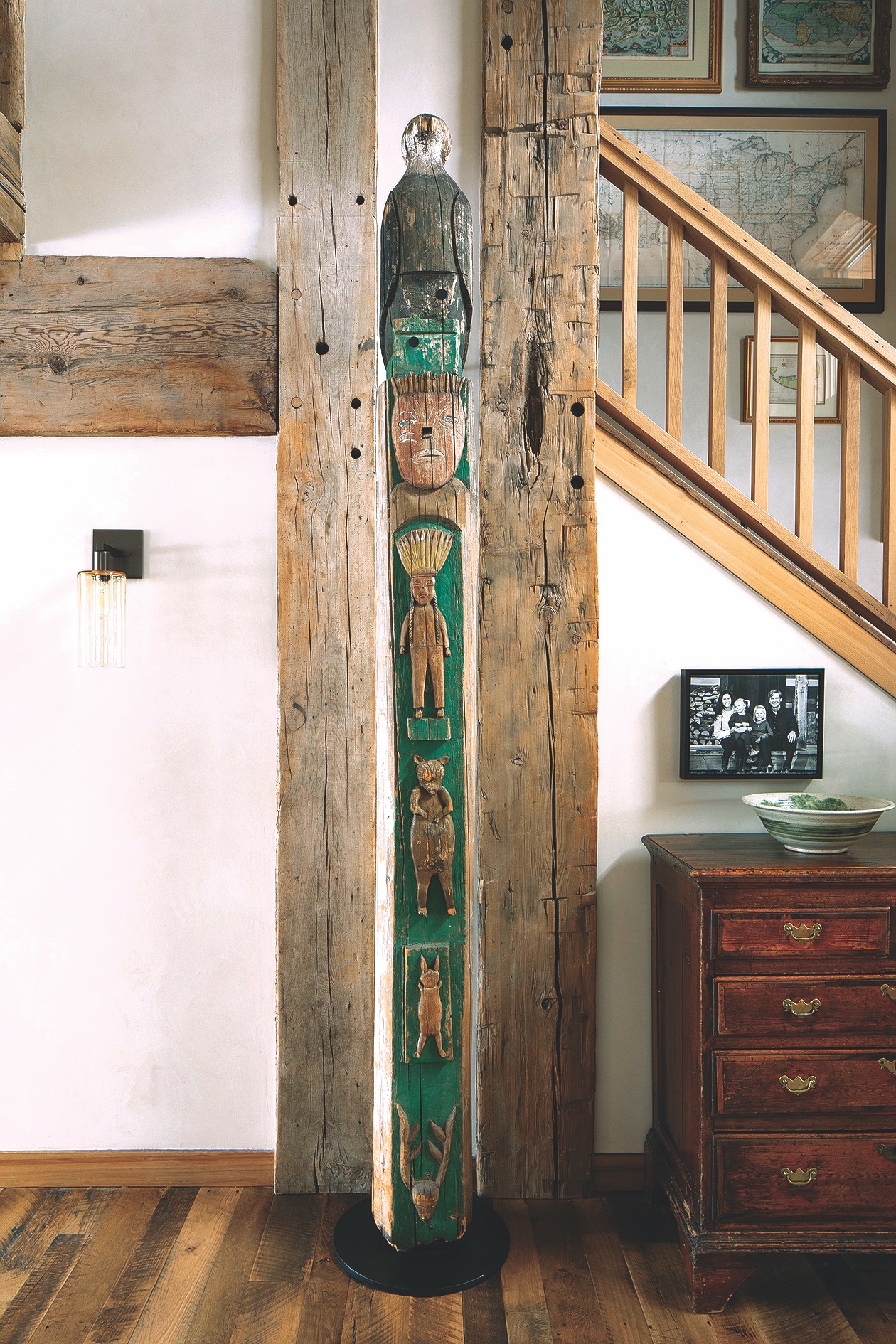 A folk art “totem,” known as a story pole, comes from a coastal tribe in Washington.

Landscape architect Tim Goss (based on Bainbridge Island, Washington) was invited to tour the building lot early in the three-year process to make siting suggestions. “We pretty much left everything as wild as possible,” he explains, “while making sure the home had views of the Grand Teton (the highest mountain in Grand Teton National Park).” John Holland calls it “having a front-row seat to nature.” 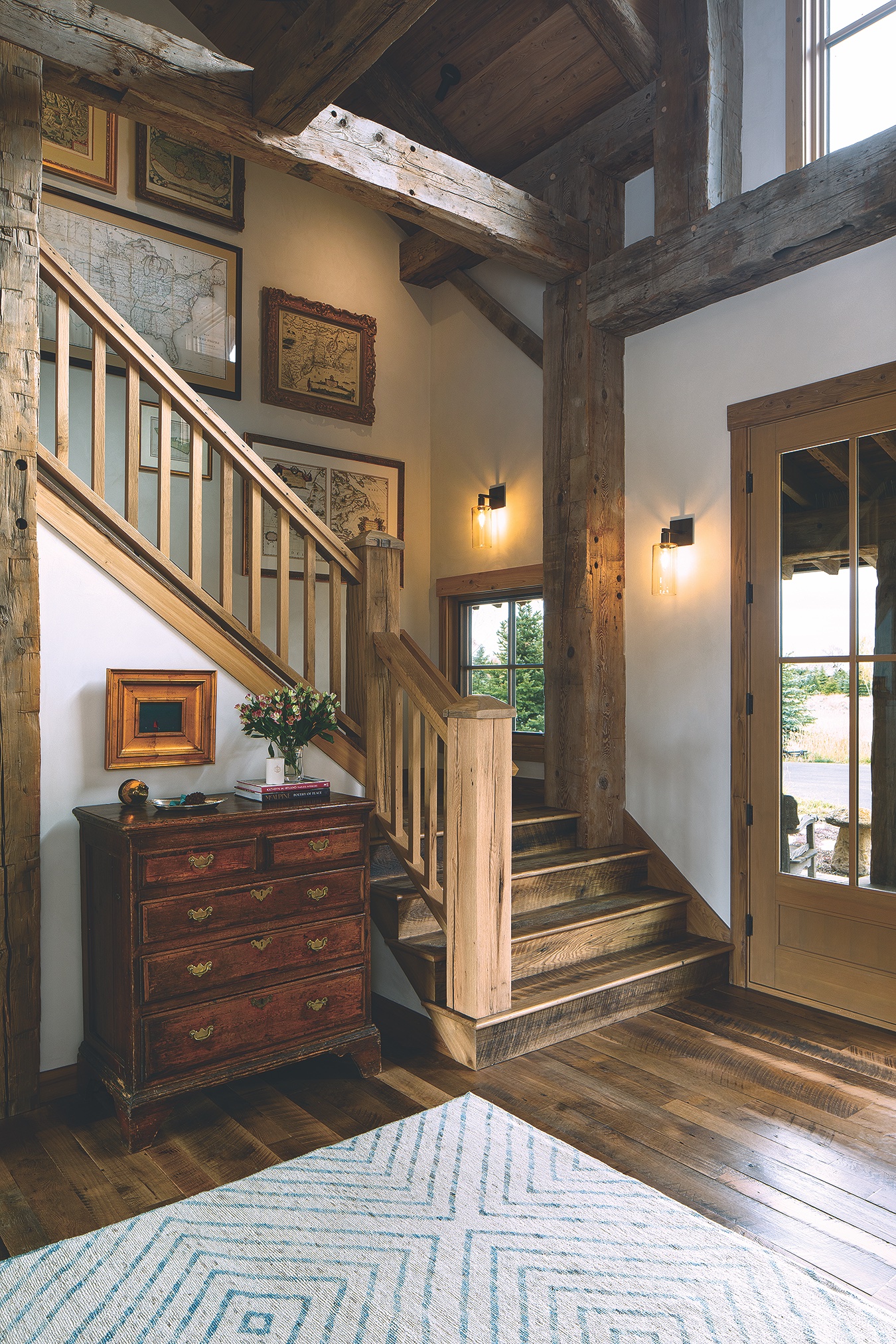 “The antique English chest of drawers is the first piece of furniture my parents gave me,” says John Holland. The stairway leads to second-floor bedrooms.

Joe Montesano of Driggs, Idaho-based Wilkinson-Montesano Builders was immediately on board. “The first shovel I put into the ground for John Holland was in 2003,” he says. The builder’s task was to construct “an extremely comfortable house with just enough rusticity … but built to Teton County’s strict building code.” The exterior is 100-percent reclaimed hemlock and pine. The interior millwork is all salvaged material—heart maple, white oak and walnut. The floors are white oak with some red oak mixed in for color. The interior ceilings are all cypress. “The wood was originally milled from old-growth trees,” says Montesano. “The wood is hard, and the grain lines are tight—even in the white pine, which is as hard as oak.” He concludes by saying, “We just can’t get wood like that anymore.” 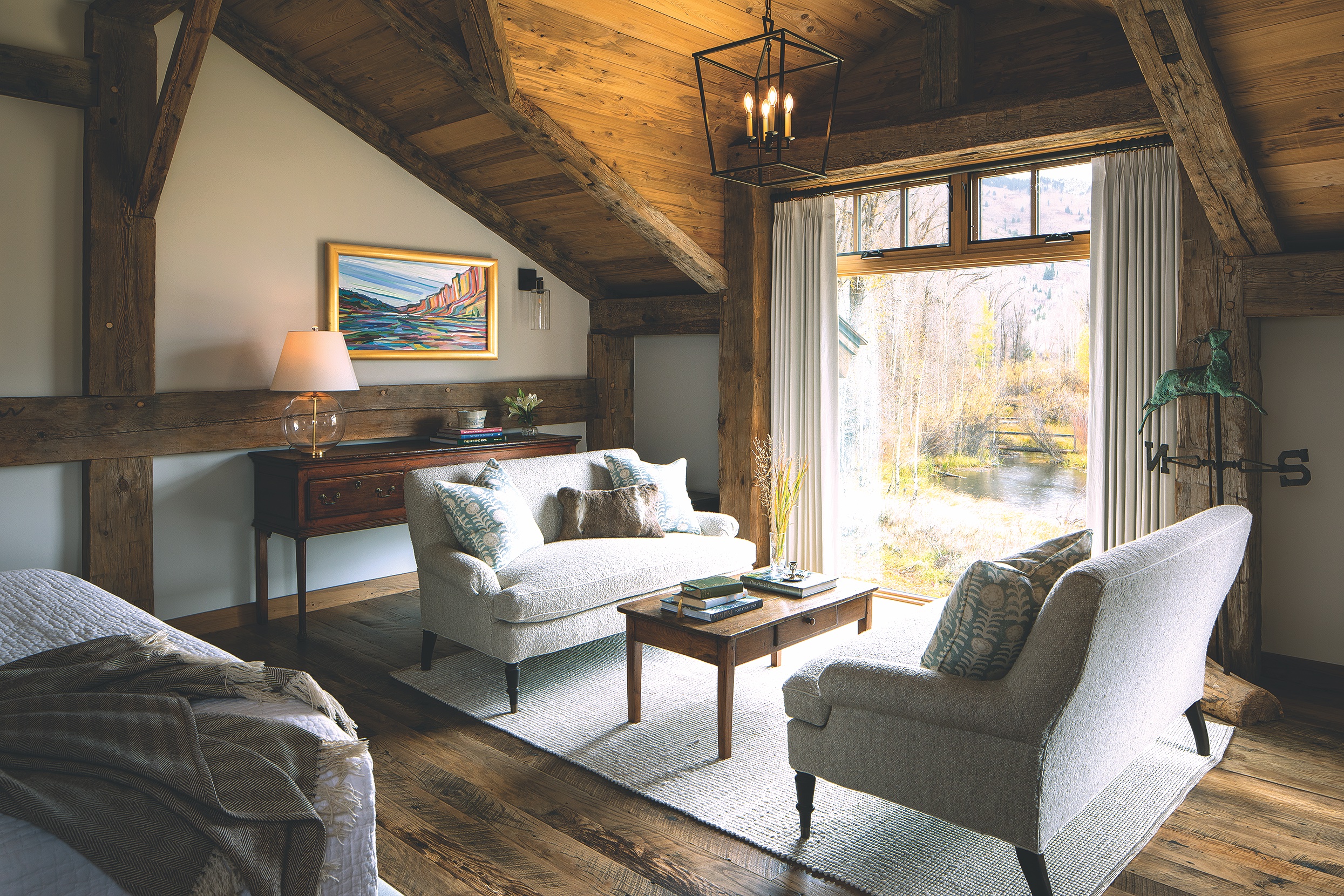 While the barn was being reborn as a 6,066-square-foot, five-bedroom, five-bath home with old-fashioned American clay walls, Emily Janak of Jackson, Wyoming-based Emily Janak Interiors was tapped to create warm, informal, livable interiors. The Hollands’ antiques, extensive collection of Edward S. Curtis photogravures and original Western art were partnered with a fun selection of fabrics and finishes—especially in the kitchen, the children’s rooms and the baths. Lighting was a particular challenge because the ceilings in the main structure are 28 feet high. “We opted for floor and table lamps as well as amber sconces that give the room a warm glow,” Janak explains. 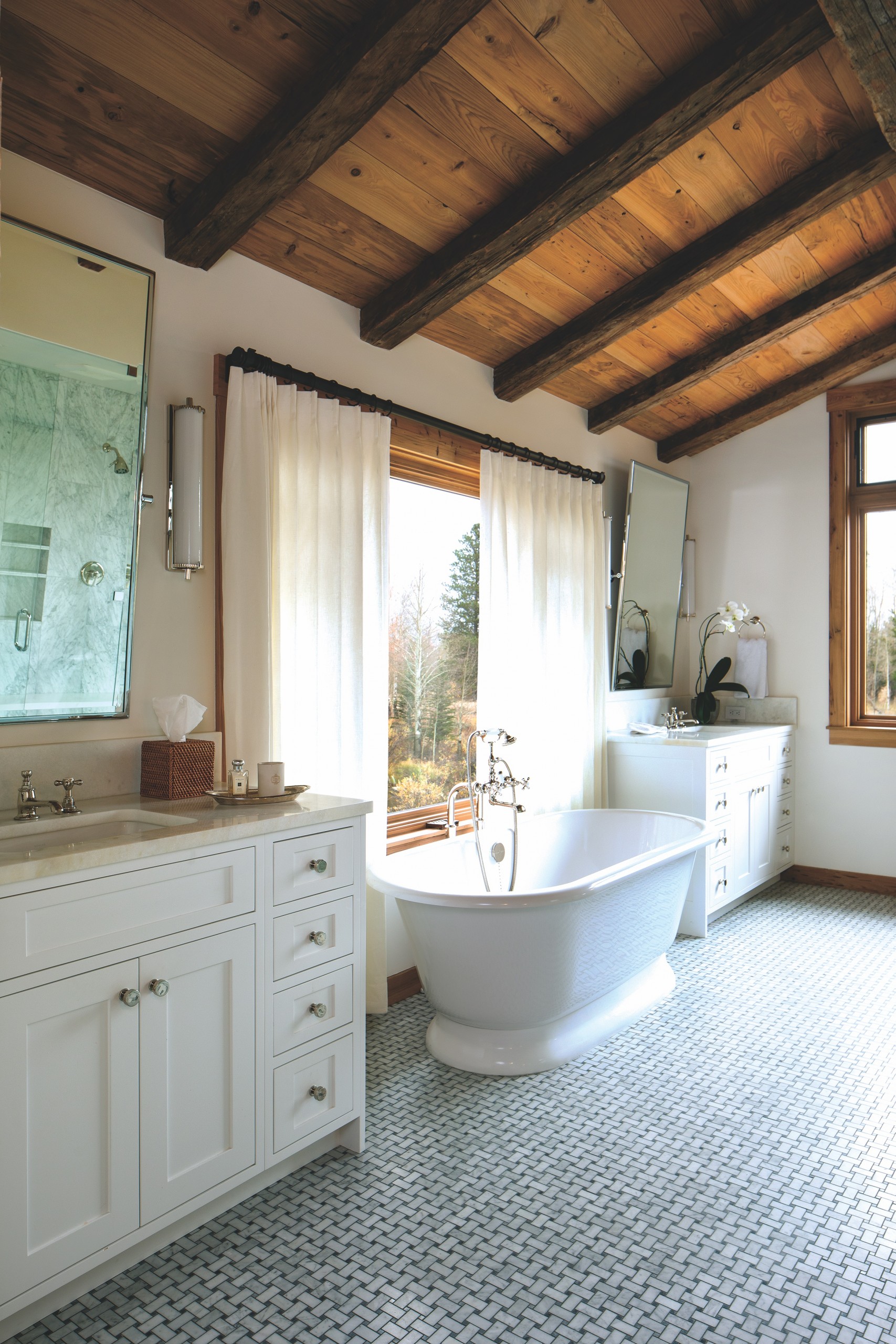 Basketweave tiles give the main bath a vintage look.

Sitting in the great room with its tall ceilings and lofty open spaces, John and Shelley Holland say, practically in unison: “We built our home around an antebellum Northern white pine timber-framed barn … and it is the best decision we’ve ever made.”

New life for old buildings that might otherwise be demolished. The charm of historic structures is undeniable, and there’s a certain romance to rescuing them from ruin. A barn can be the perfect empty shell in which to create a family home. John Holland, founder of Old Growth LLC, has some tips and suggestions.
First, decide if you’re planning TO USE THE STRUCTURE IN ITS ENTIRETY as the bones of a new home or wanting to reclaim individual elements of the structure to use as rustic accents in an existing home. If using the entire building, you’ll want to ascertain the building’s STRUCTURAL INTEGRITY. Checking for dry rot in the beams or logs is perhaps the most important task. An expert on log-and-timber homes or a good builder can help you with this. EMBRACE THE HISTORY. Nineteenth-century America had the most incredible natural resource—a wealth of virgin forests, densely filed with enormous trees. These structures were built by farmers and homesteaders using the materials at hand. DESIGN INTERIOR SPACES CREATIVELY. The old structure will not be perfectly square or perfectly plumb. There will be irregularities. There will be odd angles. Fight any instincts to “square things up.” STRIVE FOR NET NEUTRAL ENVIRONMENTAL IMPACT. Using wood that has already been harvested and is still viable reduces your home’s carbon footprint.