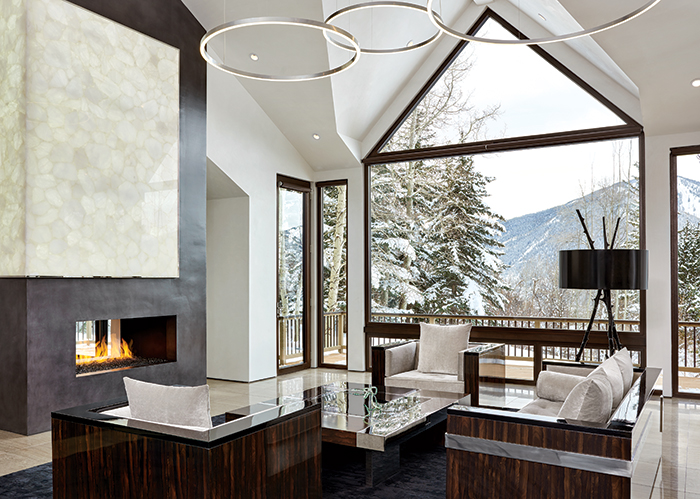 Robert Scannell knows a lot about real estate; his company builds industrial projects all over the country. When a friend suggested he look at a home on Red Mountain in Aspen as a possible tear down, he took one look, noted its views, location and good bones, and made his offer.

Scannell, a resident of Indiana and longtime homeowner in Beaver Creek, Colorado, hadn’t spent much time in Aspen but knew it would suit him. The home—a classic 1980s-era 6,000-square-foot  home with heavy logs, a big river-rock fireplace and lots of wood trim—stylistically did not. However, after spending time there, he, his girlfriend Cynthia Murdock, and his daughter, interior designer Lauren Scannell, agreed it could be re-envisioned. “We decided it would be a shame to tear it down,” recalls Scannell. “There were so many opportunities to make it so much more. And I thought it would be a great project for the three of us to do together.” 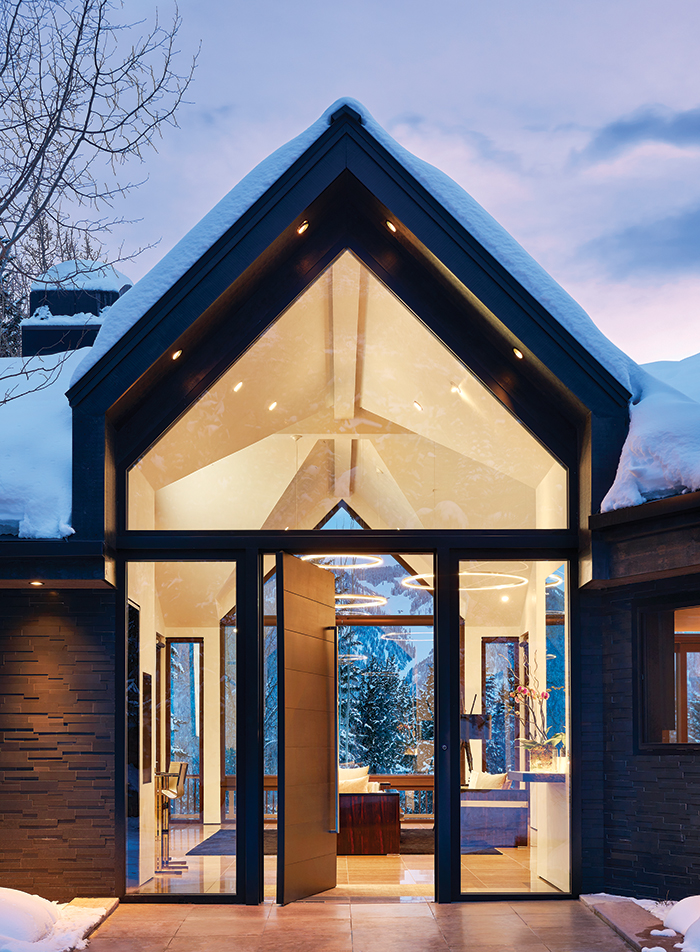 Scannell hired local architect and structural engineer Ted Guy of TKGA, who brought in designer Barbara Long as his collaborator, and Aspen Construction Management. The mission was clear: modernize the building, take advantage of the views, open up the walls and increase the expanses of glass. “They wanted very contemporary and clean interior finishes and materials,” says Guy. “We got rid of wood trim, beams and columns, removed the river-rock fireplace and took out a lot of walls to make it much more open.”

Guy’s experience in structural engineering was invaluable, Scannell says, particularly when removing walls and transforming the living-room fireplace to a two-sided modernist feature. “Our changes were so substantive it involved a lot of structural work and decisions. There was a lot of back and forth between Ted, the contractors, Lauren, Cynthia and me regarding what we could do to open it up and maintain its structural integrity.” 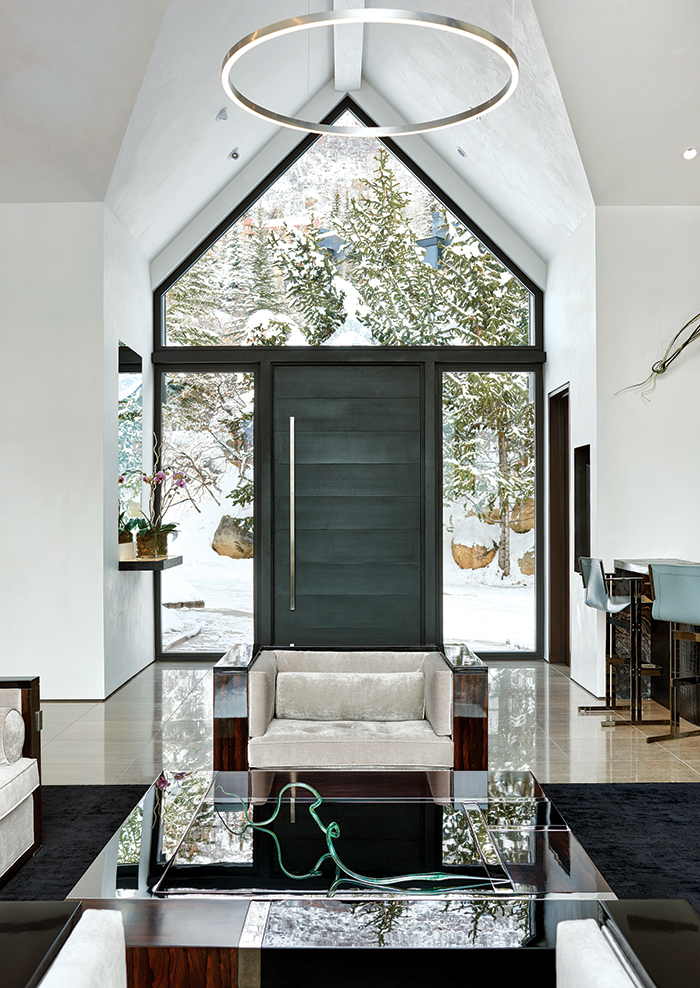 Throughout the house, windows with mullions were replaced by unbroken expanses of glass to open the home up to the views. The custom front door is from Pivot Door Company.

For designer Lauren Scannell this would be her first major solo project, but her client didn’t hesitate. “Lauren is very creative,” he says. “She has a great eye for detail and a talent for listening to what a client wants and adapting to that. It was a collaboration that really worked.”

Lauren sourced the furniture (much of it custom from Hudson in New York and from the Italian firm Minotti), lighting and finishes, including precious stones used in large quantities. In the kitchen, a backsplash made of agate is backlit by LED panels, while a marble island countertop has a waterfall edge “to give a sophisticated feel.” She coordinated with her father and Murdock as they worked with artists such as Christopher Nelson on commissioned pieces. They solved the problem of a structural column in the living room by turning it into a dramatic artwork. A tree trunk of bronze and mirror-polished stainless steel curves through the space. Strikingly contemporary yet organic, it speaks to its mountain setting. Another monumental piece by Nelson, of black cast acrylic, was designed to anchor a corner where the open curved staircase descends to an open room with billiard table, seating area and wet bar. 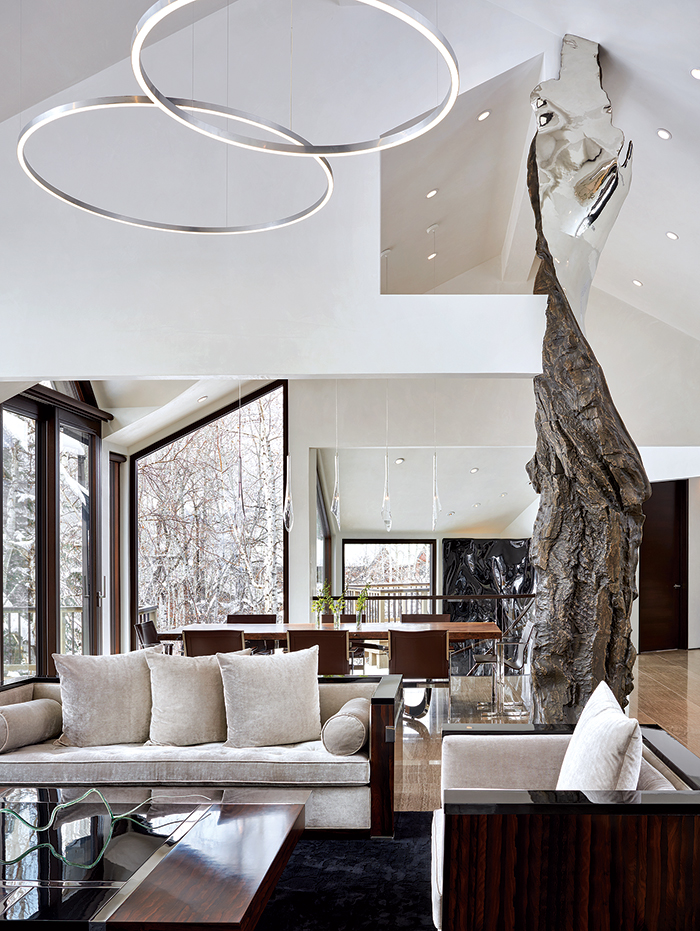 Colorado artist Christopher Nelson created several custom pieces for the house; the team collaborated to turn a structural column into art that leads the eye to the cast and dramatically angled ceiling.

Throughout the house, the designer says, “Our thought was to open it up, maximize the windows and take away as many mullions as possible, because the reason people live on Red Mountain is for the views.”

Architect Ted Guy agrees, and he credits the spirit of collaboration for the success of the project. “It was a lot of fun. We met frequently, and a lot of the design work happened as we tore apart the existing building and made decisions about how we could use the old structure as new living space. We were designing constantly from beginning to end.”

And in the end, he says, the result “is green, it’s sustainable. We’re not throwing away an old building but giving it a new life. And as a structural engineer and an architect, I find it’s a lot more productive to do that.”

“We’re not throwing away an old building but giving it a new life.”
— Architect Ted Guy

Modern furnishings suit the newly open spaces. The live-edge walnut slab table is from Hudson Furniture, the chandelier from Terzani. 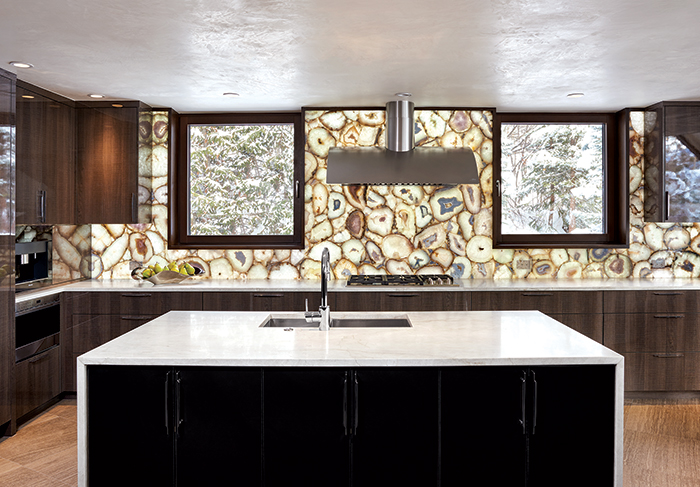 The touchstone of the sleek kitchen, with its marble countertops and flooring, is a backsplash of back-lit crystal agate precise stone. 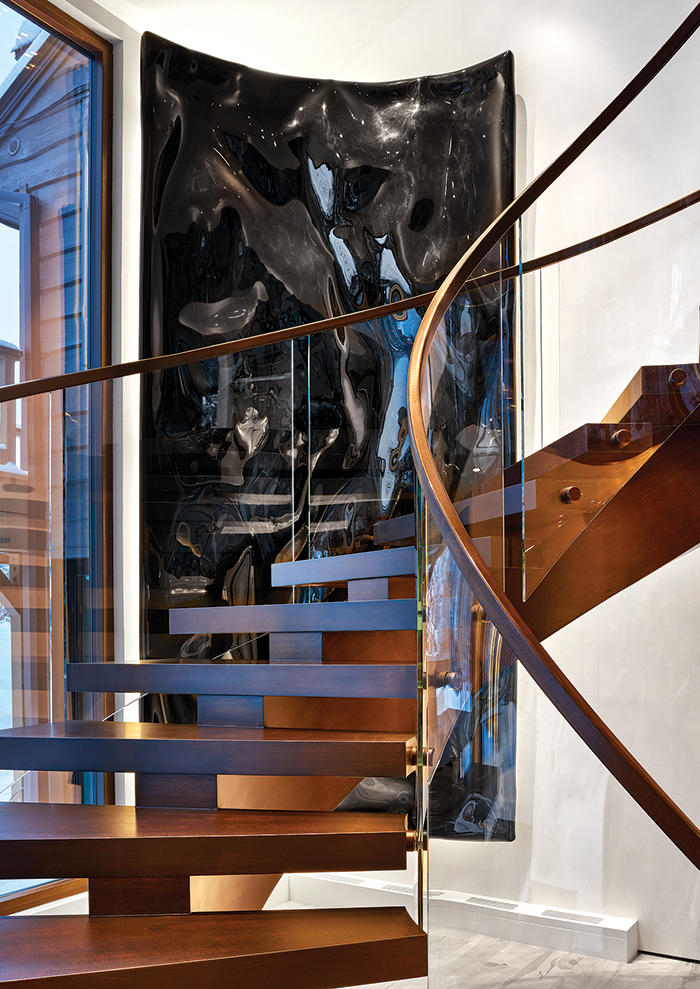 A spiral staircase with white-oak treads lends a sculptural quality without blocking the view of the Christopher Nelson artwork that grounds the corner of the room.

The dramatic master bedroom features an elevated fire-place surrounded by backlit smoky quartz. The Castle light fixture is from Roll and Hill. 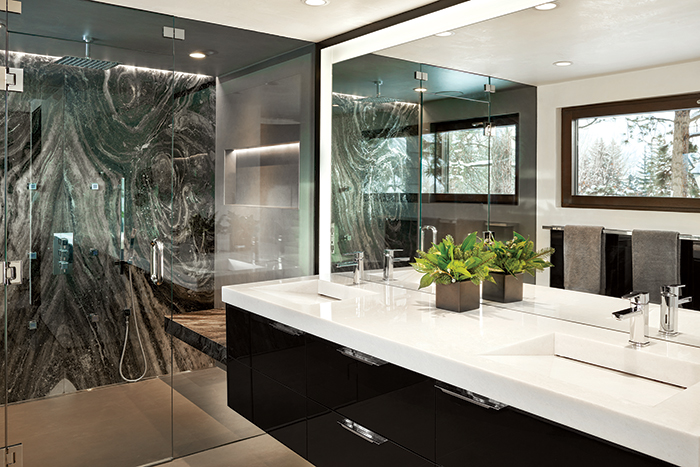 Modern design dominates in the master bath: floating cabinets, a glassed-in shower and an art piece by Alex Rurco made to resemble Turkish marble.

That building new is easier and often cheaper than remodeling an existing structure is not a new notion, yet somehow it still surprises. But despite its inherent limitations, remodeling is the more sustainable practice and therefore worth every effort. Remodeling calls for creativity, flexibility and the ability to think outside the box. A few simple guidelines can render the process more triumph than tribulation:

ACCENT THE POSITIVE:
The classic 1980s lodge home had odd ceiling angles and dated finishes but a great view. The design team replaced solid wooden doors at the entry with one door surrounded by glass. Even before entering the house, it’s all about the view.

BE WILLING TO COMPROMISE:
Eight-foot ceilings in the lower level of the home weren’t ideal when the goal was “light and bright.” Rather than digging deeper to get more ceiling height, the team decided to make the most of the available space. White walls and polished floors reflect and amplify the light while minimalistic window treatments and low-profile furniture help the multipurpose living area feel spacious, light and airy. (In the bedrooms, where sleep is the main program, the ceiling height is an asset.)

WHEN LIFE GIVES YOU LEMONS:
The team wanted to add windows, take out walls and open up the views but ran into a roadblock with a structural column in the living room. They turned a problem into an opportunity: The column was turned into an arresting artwork that serves as one of the touchstone pieces in the house.