A Ranch in the Montana Wilderness

This home dons no art on its walls; the history & natural elements are treated as art

When friends invited Ralph and Michelle Cruz out west for a visit, they jumped at the chance to experience Yellowstone and Glacier National Parks and the wildness of Montana. “We immediately fell in love with it,” he says, “and started looking for ranch land to buy.” The ranch they purchased is definitely wild—bordered on the east by the Bob Marshall Wilderness and on the west by the Mission Mountain Wilderness.

Ralph enjoys telling a strikingly parallel story of another couple—a young French Canadian woman and her Princeton-educated husband—who settled this very land in the 1930s. “It was the dead of winter when they left the glitz and glitter of Paris, fell in love with Montana and stayed,” he says. He has sepia-colored photos of the young couple (on horseback) and did extensive research, even back to the original 19th-century homesteaders. “I wanted the architecture of our home to fit into the history and the setting, never forgetting that, out here, the land is the star,” he says.

Ralph admits that he has always been attracted by the romance of the American West. “I grew up watching westerns and John Wayne movies,” he says. 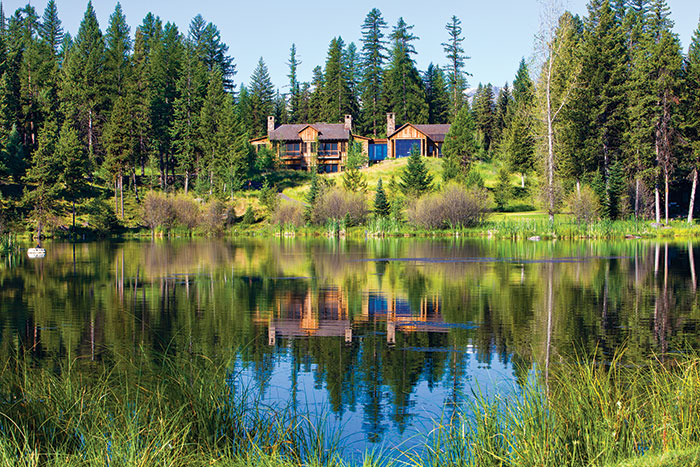 The pond and the landscaping take their cue from what was there originally—bear grasses, kinnikinnick, Oregon grape, huckleberry and western snowberry bushes. In some cases, the landscaping crew cut rectangular pieces of the native grasses, rolled them up and treated them like sod.

Ranch manager Jimmy Boyd, who served as project manager, agrees that Ralph is a romantic. “We spent a lot of time scheming and dreaming about this place,” Boyd says. But he is quick to add that the homeowner is also a perfectionist. Big ideas were tossed around and sketched out on paper. Then a dream team was assembled to rehabilitate the land (some of it had been logged), build fences, create wetlands and trout spawning beds—and begin work on the Cruz family home.

Jerry Locati and Darin Hoekema of Locati Architects in Bozeman, Montana, were selected to lead the design/build project. San Francisco-based interior designer Joszi Meskan was asked to plan the interiors. Matthew Brothers Construction was tapped to do the building, and Doepker Landscape was tasked with making the land surrounding the home look natural and undisturbed. Stonemasons, carpenters and artisans rounded out the team that would capture the homeowners’ vision.

“When we sat down at the drawing board, the owners had a lot of historic photos, documents and diaries for us to take into consideration,” says Hoekema. In addition, the homeowners wanted the buildings to look as if they had always been there. “Different buildings built at different times by different people who lived and worked on this land—that was the look we were going for,” he says. 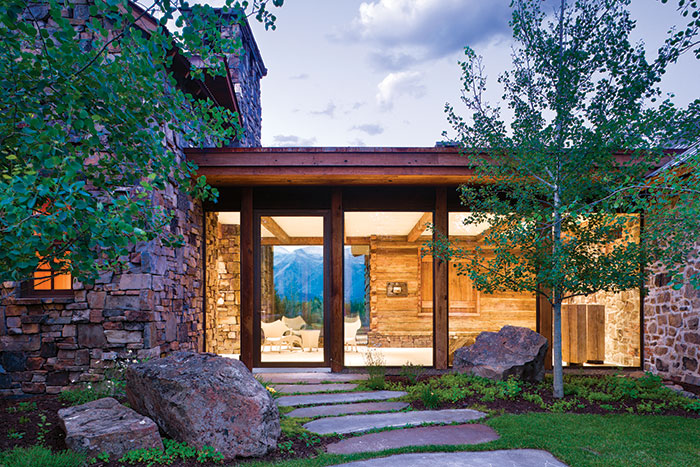 The resulting home consists of three structures: a two-story log cabin (containing bedrooms and baths), a small homestead cabin with that endearingly imperfect immigrant stone look, and the roomy ranch house encompassing a vaulted great room separated from the spacious screened-in porch by tall bi-fold wood-and-glass doors; an almost-industrial kitchen and cozy breakfast room hidden behind sliding bookcases. The stone-and-glass foyer—with big views across the pond and waterfall to the distant mountains—seamlessly connects the three structures.

“Color is used sparingly—with the sole exception of the summer porch, a veritable explosion of color, ” says interior designer Joszi Meskan. “There is no art on the walls because the natural elements are treated as art,” she explains.

“We love to ride and to be surrounded by nature, and we relish the sometimes-sketchy cell service,” says Ralph. He adds that it is important for family and visiting friends to interact with each other. Gather for dinner. Spend time talking out on the screened porches. Play board games in front of the fireplace. “Yes, I’m a bit of a romantic,” he confides with a smile.

“There is no art on the walls because the natural elements are treated as art.”
— Interior Designer Joszi Meskan 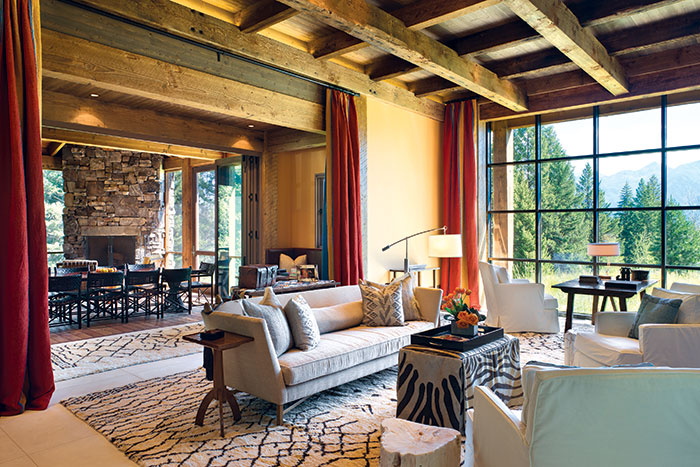 Hand-selected reclaimed timbers support and adorn the ceilings. Aspen trees in the fall inspired the orange-gold great room walls. Wool curtains are a casual denim-and-sunset stripe. An all-season porch with fireplace is separated from the great room by large wood-and-glass doors. 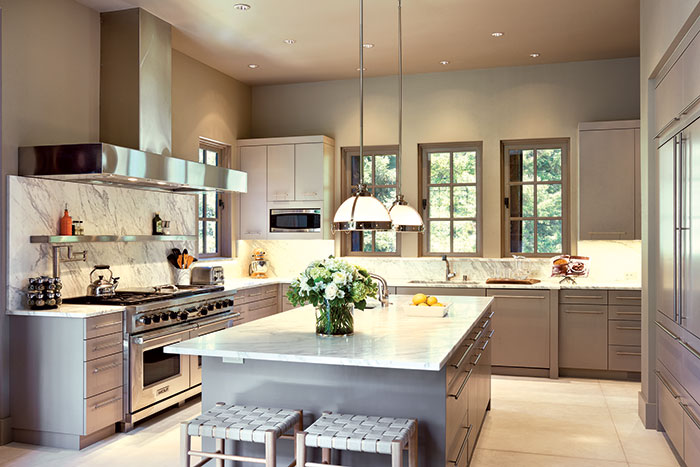 The almost-industrial kitchen (clad in Carrara marble) has two dishwashers, two ovens and a large island to make prep (and cleanup) easy. 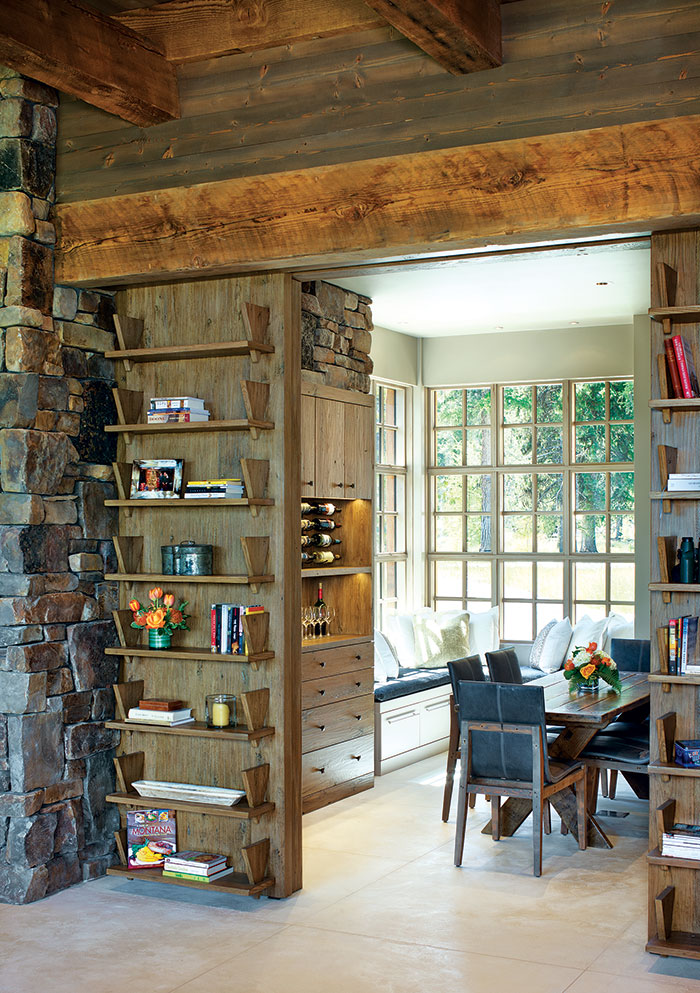 A 9-inch-deep bookcase (complete with books and accessories) pulls out of the wall to divide the breakfast room and kitchen from the great room. 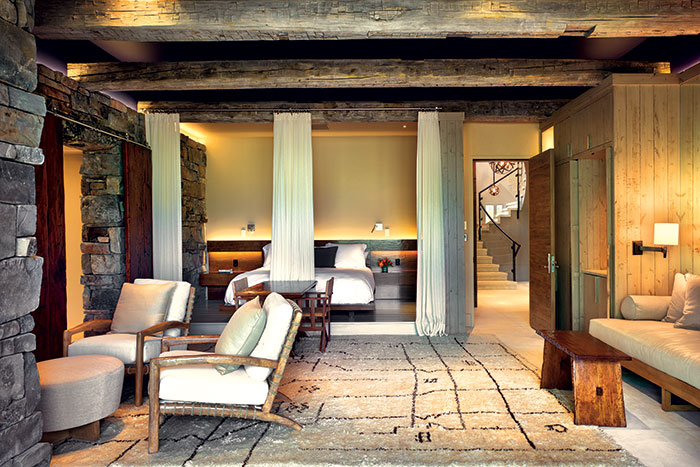 Rugs and furniture were specially designed for each space by Lockhart Furniture Manufacturing. 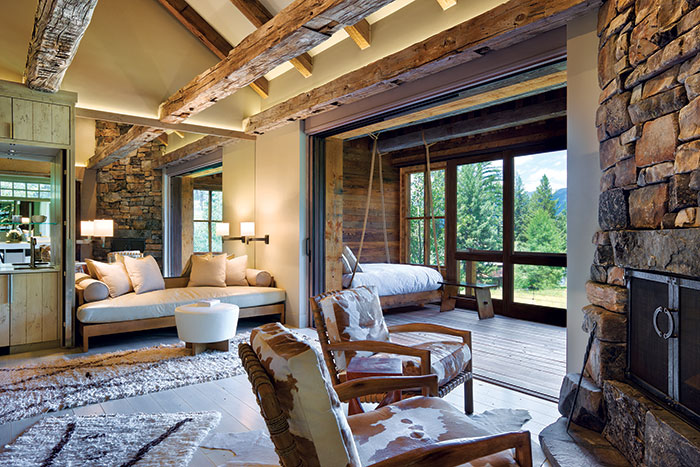 Each of the bedrooms has ensuite baths and a sleeping porch with queen-sized hanging bed. 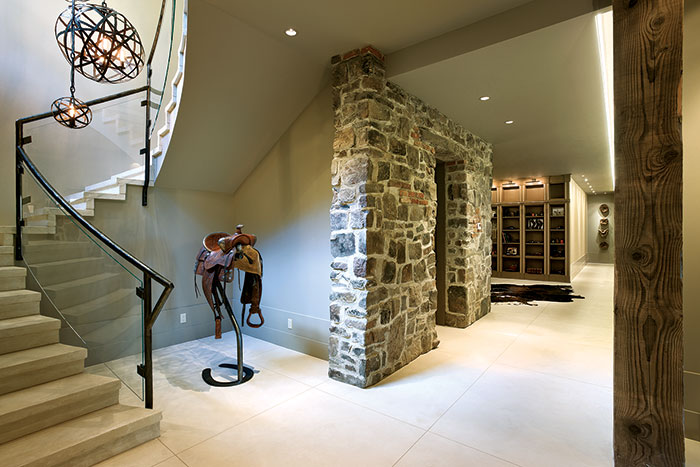 The walls are stone on the first floor, leather on the second.

SEE ALSO:
2016 Home of the Year: A Contemporary Homestead