A Montana retreat on scenic Carver Bay gets a fresh renovation

“Like landing on a different planet.” That’s how Katie Kalpakis recalls her Texas-based family’s first reaction to Whitefish, Montana. And they quickly fell under the Big Sky Country spell: “It’s just so lush and green and beautiful,” she says. “We found this property on the lake just as we were leaving town,” Kalpakis explains. “A long, tree-lined drive eventually revealed a house sitting on a point with spectacular views of Whitefish Lake to the north and south. And that was it!”

While it may have been love at first sight, a careful second look revealed a few quirks in the 1970s-era home. It had an attractive meandering layout that followed the contours of the shoreline, but it was ripe for an update. “At first, we thought we might just revive it with minimal effort,” Kalpakis says, “but the location called for much more than that.”

So Kalpakis and her husband, Mark, asked architect Rich Graves of Altius Design Group (ADG) in Whitefish to oversee a remodel. He was immediately captivated by the lakeside location. “The house was very close to the shoreline—closer than you could build now if you were starting from scratch—and because it’s on a point, you really don’t see the neighbors,” Graves explains. “When you’re in the house, you really feel like you’re in a boat.”

The refurbished sky bridge is a light-filled space for relaxing, with a much-loved family piano. The driveway, too: “When you approach the house, it looks like you could drive right into the lake!”

Although the original renovation strategy involved only the bedroom wing, “Like a lot of remodel projects, it started as one thing and ended up as another,” Graves says. So local interior designer Inge Cahill of Home Matters, Guy Meyer from Meyer Construction and Rod Willard of ADG, in charge of technical drawings and structural coordination, joined the team. Their plan for updating the home involved easing the flow of space between the various levels, brightening the rooms and enlarging the windows, while also improving insulation for greater energy efficiency.

First things first, the team had to figure out what to do with the too-narrow, low-clearance bridge that spanned the driveway and connected the two wings of the house. The solution? Demolish the old bridge and build a new one that was bigger, higher and more useful. “That was a watershed moment,” Graves says. “It became a huge opportunity to make this a really cool project.” With its distinctive roofline and enlarged square footage, the new sky bridge is a focal point of the home, providing extra space to entertain and unwind.

Inge Cahill worked with the homeowners to create a family-friendly, mountain-modern lake house—“something much lighter and more comfortable,” she says. And inspiration was all around. “We wanted to bring the outdoors in—colors like soft blue, gray and silver light tones from when the first morning sun rays reflect on the surface of the lake. The glacier water colors transcend into blue-green tones in the daytime under clear skies, with iridescent undertones,” Cahill explains. “It is such a magic palette.”

With a terrace, six decks and scene-stealing windows in nearly every room, the house is all about laid-back lakeside luxury. But the original kitchen design turned its back on a glorious bay-window-framed view. Cahill wondered, “Why not take that bay and embrace it as your main cooking station?” So the homeowners and designers decided to flip the dining and kitchen areas so that the contented cook can now gaze out at the water while prepping a meal.

“We enjoy the lake from within the home all day long because it is an ever-changing work of art,” Kalpakis says. The refreshed house has become a welcoming family getaway. “It’s not a showplace,” she says. “It’s a little piece of heaven that we’ve borrowed for awhile and enjoy sharing with others."

"When you're in the house, you really feel like you're in a boat.” — Architect Rich Graves 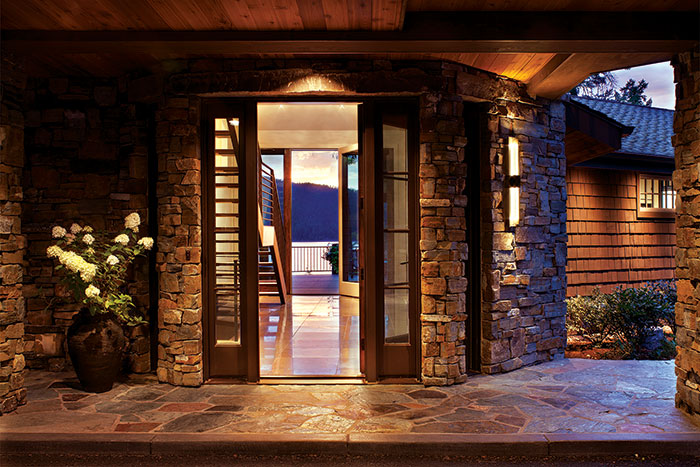 The architects refined the entry “so when you walk up to the front door, you look straight out to the water,” Graves says. 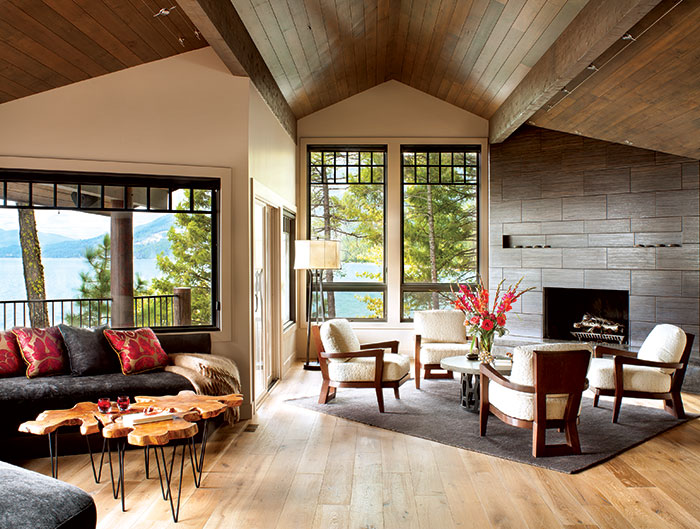 The living room is surrounded by spectacular views. Designers replaced the fireplace’s original river rock with a sleek, textured tile for an updated look. A quartet of Berman Rosetti Hourglass lounge chairs are upholstered in a family-friendly fabric from Perennial. Custom bay window seating is covered in a plush Holly Hunt chenille, with a curvy wood slab table nearby. 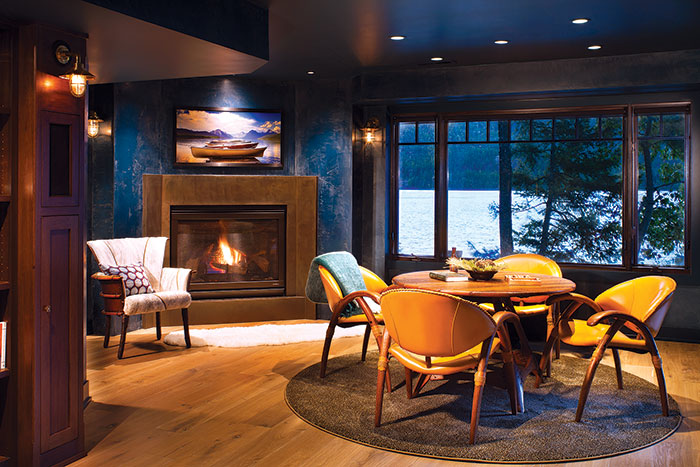 The family room’s deep blue hand-plastered walls provide a dramatic backdrop for the circle of gold leather chairs, warmed by the glow of brass sconces salvaged from an old ship. 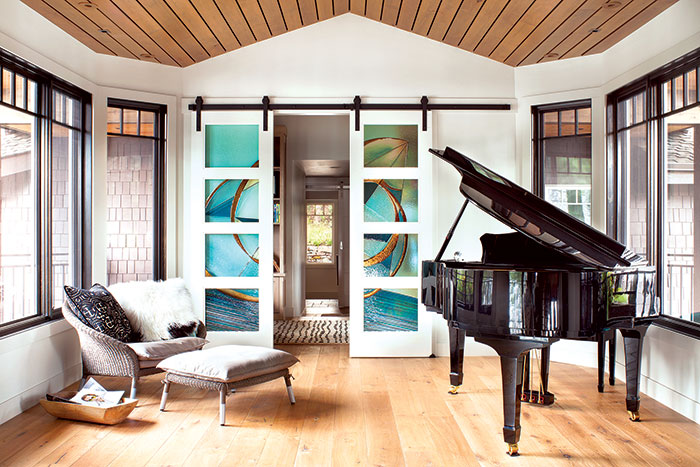 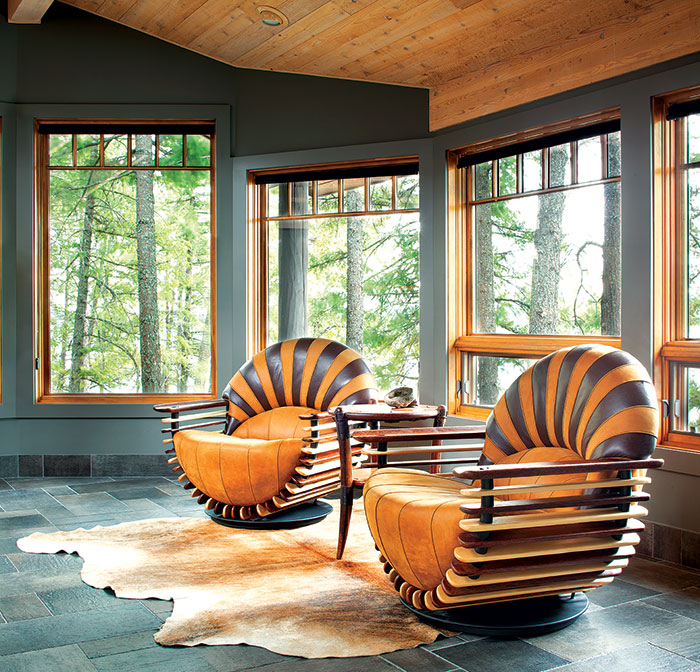 Swiveling Luxor armchairs from Pacific Green add a “wow” factor to the office. 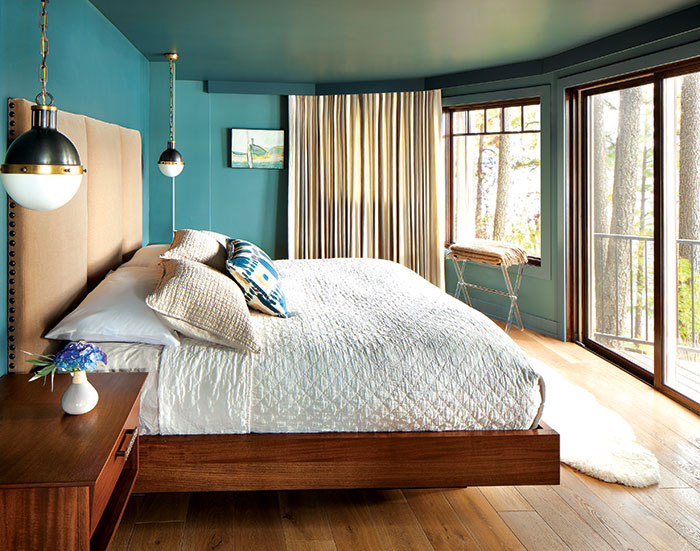 Cahill describes the guest bedroom as “very lakey,” with “everything floating and low.” The custom platform bed is flanked by wall-mounted nightstands and lit by a pair of glass-and-metal hanging pendants with a vintage nautical flair.