A Pocket-Sized Condo That Packs a Punch

A compact ski-in, ski-out Snowmass Village condo in the Stonebridge Condominiums (built in the 1960s) is the much-loved vacation home of two Detroit-based families. They bought it together back in 1998. “At that time, when our children were just babies, neither one of us could afford to buy a place on our own,” says the homeowner. 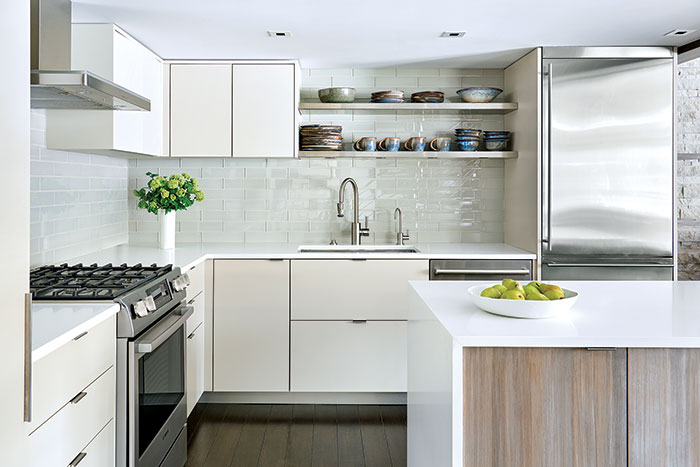 The fresh-looking kitchen is open to the dining room and the living/family room.

As their children grew, the just-under-2,000-square-foot unit was worn, outdated and was feeling a little cramped. “We decided to bite the bullet and do a major overhaul,” the homeowner says. Not just the carpets and drapes this time. The homeowners wanted to change the entire configuration and feel of their beloved home. 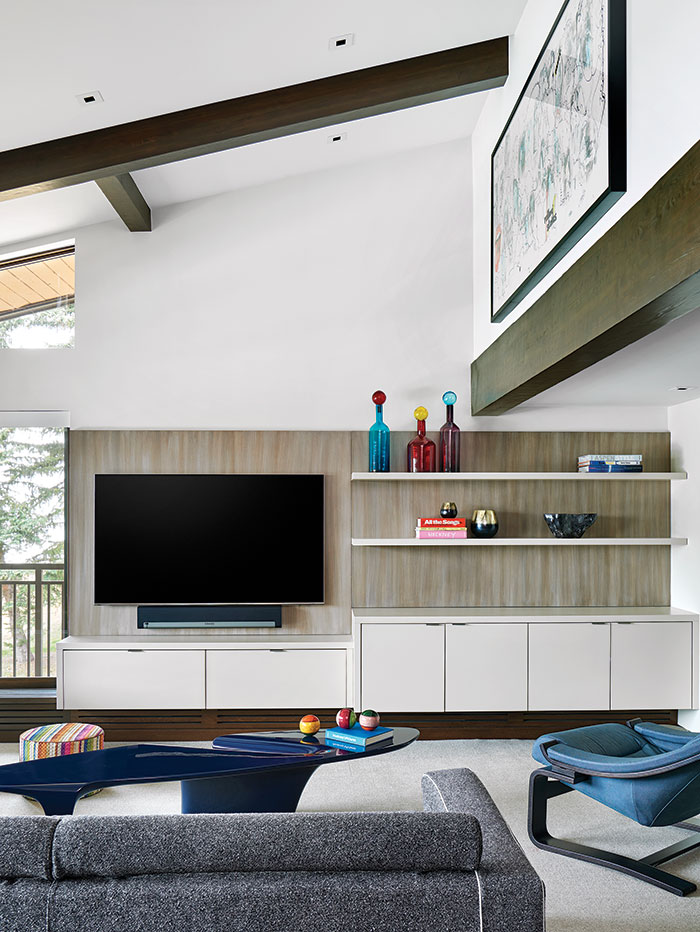 Storage—for four adults and six kids in a relatively small space—can be a challenge. Charles Cunniffe Architects made certain that each inch was “contributing to the smart use of the space.”

“We sat down with Charles Cunniffe Architects and said, ‘we have this unit that we love and we cram a lot of people (four adults and six children) into it,’” the homeowner recalls. “The design of small spaces is very much like good yacht design,” says Cunniffe, whose architectural firm has renovated many small vintage condos. “Every inch must be thoughtfully used.” 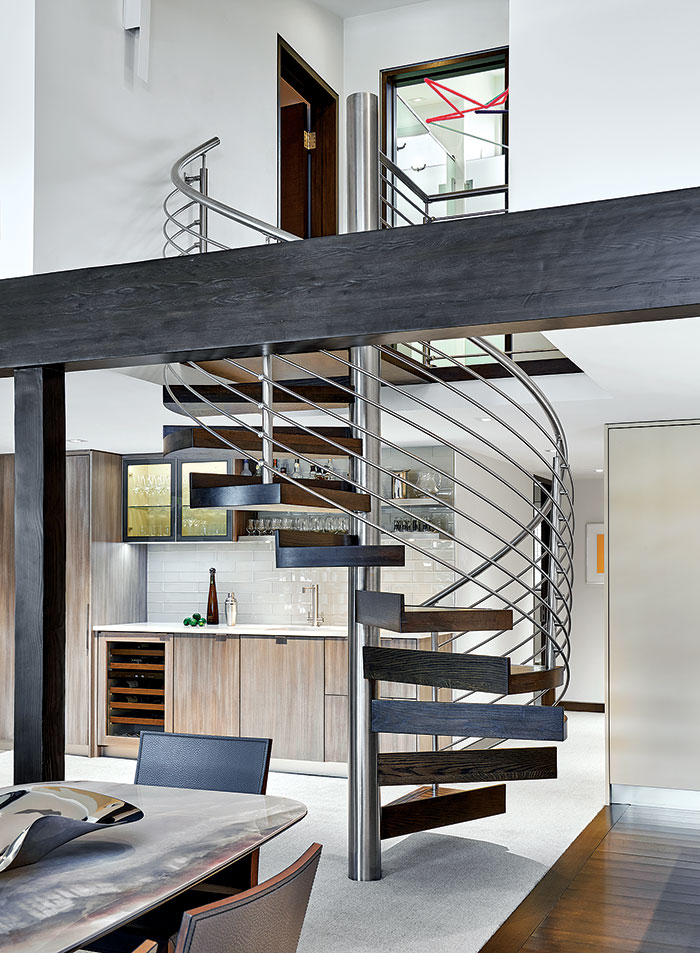 The spiral staircase is particularly suited to the small space.

One of the first things that project architect Ryan Hoffner addressed was the quality of the light. “This is a great, top-floor unit … with good bones, but it was heavy and dark,” Hoffner says. The team designed a lighting system that mirrors natural light as it changes from morning into night.  The homeowners say this made a huge difference, as did the choice of neutral wall colors and cozy-but-light-hued fabrics. 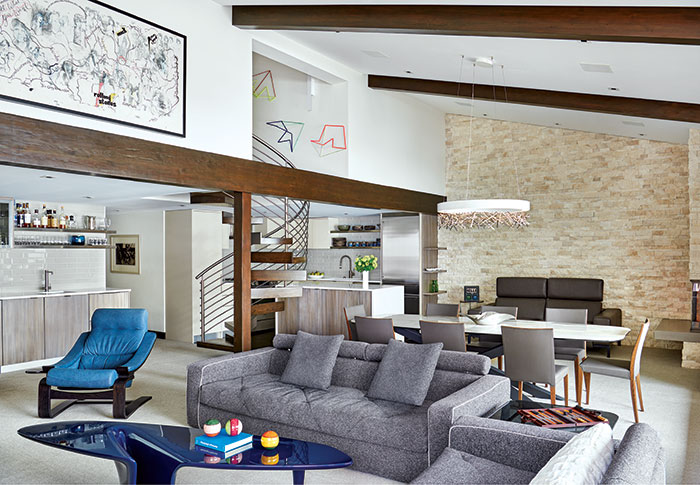 Sleek furniture in a neutral palette—with pops of Colorado-sky blue—makes the just-under- 2,000-square-foot space seem larger. Art is by local (as well as Cranbrook Academy of Art-based) artists.

The original kitchen was tucked away in a dark, dead-end corner. The reconfigured space, focused around an island, is open to both the family room and dining room. The architects also created a bar wall—with counter space, wine fridge, refrigerator and freezer drawers—as an extension of the kitchen. 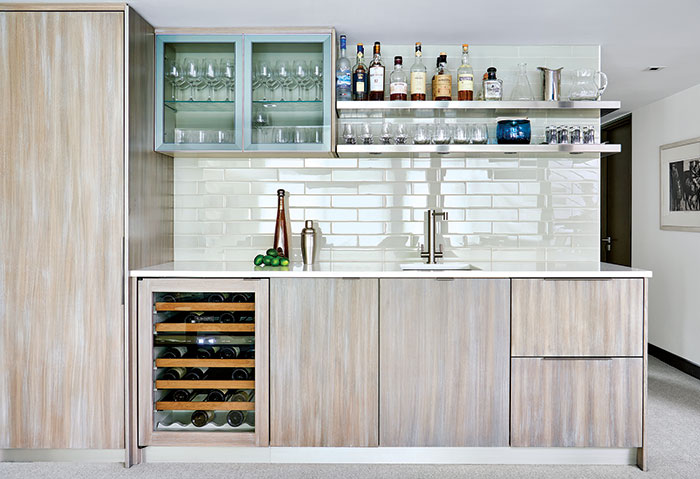 The bar wall (with refrigerator drawers and wine fridge) is a stylish extension of the kitchen.

A monumental moss-rock fireplace intruded into the living space but was built on a concrete block and could not be removed. Undaunted, the architects concealed it behind a façade of light-colored limestone. “We celebrated the stone by running it across the entire southern wall,” says Hoffner. Another space saver was the organically inspired wood-and stainless-steel spiral staircase. 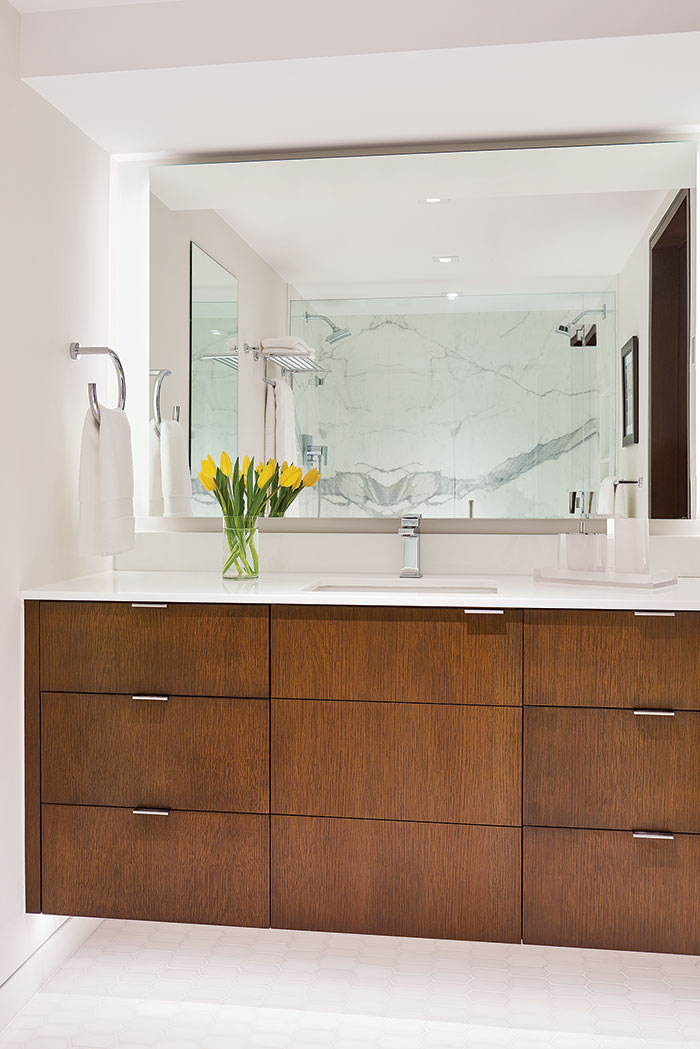 Clean and uncluttered countertops are made possible by hiding everything from spare towels to hairdryers in the many bathroom-vanity drawers.

The two master bedrooms and baths on the first floor were “enlarged” by cleverly creating more built-in storage.

Upstairs, bunk beds were replaced by custom-made beds with storage underneath. Because there’s only one bathroom (shared by six kids) on the top floor, the architects divided it into three useful spaces. The toilet is separated from the sink area by an opaque glass wall, and the shower is surrounded by switch-glass—clear glass that becomes opaque with the flip of a switch. 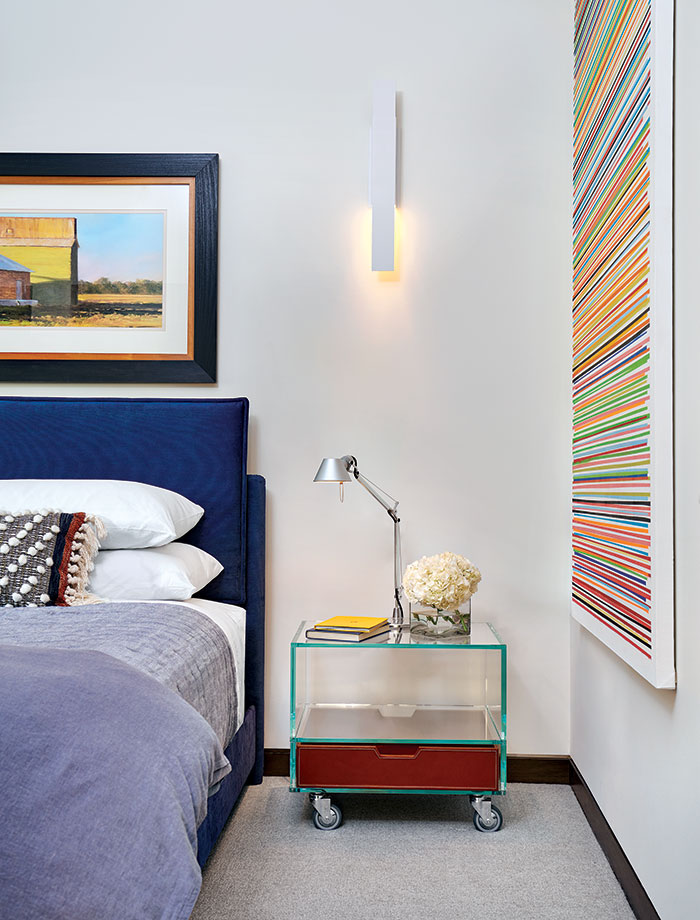 Each of the identical en-suite master bedrooms on the main floor is decorated differently—each reflecting the homeowners’ strong personal sense of style.

“I know this may seem like a small thing,” says the homeowner, “but we are so pleased with the mud room.” Once, it was an entryway with no storage (the homeowners recall piles of skis and boots stacked willy-nilly by the front door). Now, the room is light-filled with an almost-sculptural wall of cubbies, a row of boot warmers underneath the bench and a rack for skis. 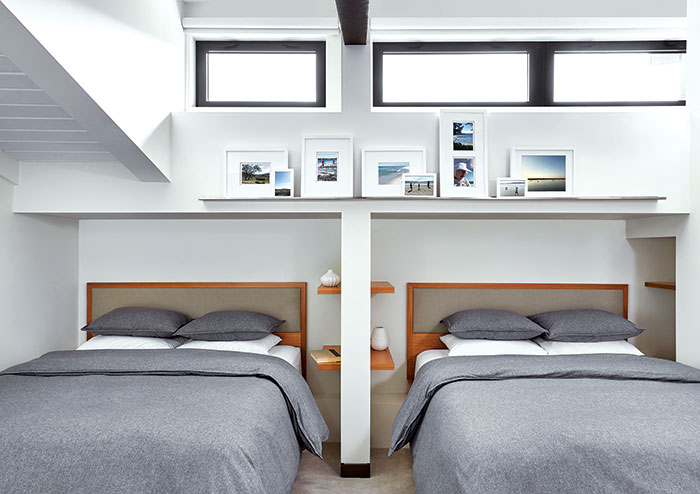 One of the upstairs bedrooms was made larger by creating an alcove that uses the previously unutilized roofline space.

The architecture-and-design group is equally pleased with the result. “Every space has a function—sometimes more than one—and no space has been wasted,” says Cunniffe with a smile.