A Mountain Family Returns to the Roaring Fork Valley in Style

From the time she was a child, Anne Cook spent both summer and winter vacations in Snowmass. “My father’s best friend—who is my godfather—built a log cabin on a 35-acre parcel,” she recalls. “He later created an addition just for our family.” It became her family’s cherished place of love and friendship together with the raw beauty of nature and the mountains. Her husband, Bryan, spent his vacations at a family place in Vail that was the heart and soul of his family for three generations. Anne and Bryan met, married, had children … and their love for the mountains continued to be woven into the family’s tapestry. “Our girls grew up going to Snowmass in the summer to hike and to Vail in winter to ski,” she says. “They are mountain girls.” 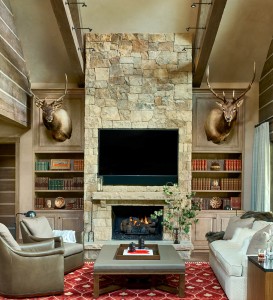 When it was time to build their own mountain home, the Saint Louis-based couple chose a building lot that became available at Basalt’s Roaring Fork Club, part of a planned community of individually owned cabins designed by Aspen, Colorado-based Poss Architecture + Planning and Interior Design. “From its beginning in the mid-90s, the concept was to do a very relaxed anti-country club development with cabins that had a homesteading feeling,” says Philippe-Antoine Beauregard, project manager. 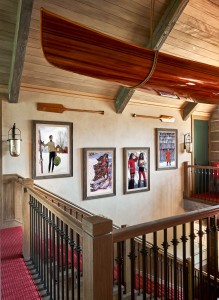 An up-lit canoe suspended in the loft helps define the volume of space.

From the outside, the Cooks’ home is a traditional Colorado mountain cabin with log siding, vertical board-and-batten fir siding, true dry-stack natural fieldstone and a corrugated metal roof on the exterior porches (the rest of the roof is fire-rated wood shingles). Inside, the home is lighter and more contemporary with big-scale rooms and large windows. “It is quite an interesting … and subtle contrast,” says Beauregard. 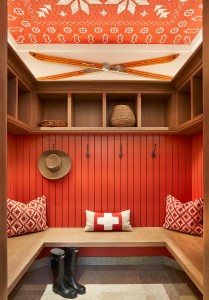 The ski dressing alcove has electric boot warmers below the seating. The ceiling (painted on canvas and installed like wallpaper) resembles a Norwegian ski sweater.

“My goal was to create a beautiful marriage of our family histories in Colorado and create a new beginning for our family,” says Anne. She wanted a log cabin much like the one in Snowmass that held so many precious childhood memories. Bryan Cook loves modern architecture and wanted something lighter and brighter and less rustic than a traditional log-and-chink cabin but without losing the historical Western references. Anne explains, “The architects knew my godfather, so they understood my references to the Snowmass cabin.” 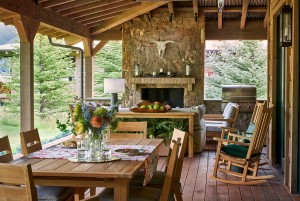 The east deck is everyone’s favorite place to hang out. It incorporates a seating area by the fire and a dining area with an expandable teak table. On cool evenings, heaters keep guests warm. “I love the sound of the stream and that fresh Colorado air,” says Anne Cook.

“I felt confident that we could marry the two ideas and fill our sweet cabin with our families’ collections of Colorado art, Hopi pottery, Indian rugs—all the things that have a true and deep meaning for us,” she adds.

The entry hall maintains the rustic quality of the exterior with its interior log siding and thick oak stair treads. The Old Hickory Furniture settee is custom upholstered with an antique rug.

To help with the interior design, Anne Cook called on Ann Ferguson of Flat Rock, North Carolina-based Ann Ferguson Design. Says Ferguson, “I’ve known Anne and Bryan since I designed their first ‘married’ house exactly 30 years ago.” This is their fifth project together. Ferguson admits that she took some risks, like using the red color on the kitchen ceiling. “When it works, you get chill bumps,” she says. 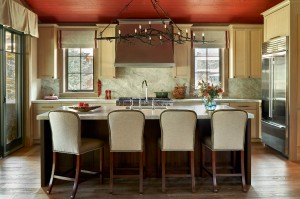 The kitchen’s red plank ceiling was inspired by the vibrant rug in the living and dining areas.

The Cooks’ cabin, surrounded by aspen and spruce, sits directly on the fairway of the club’s Jack Nicklaus-designed golf course. From concept to completion, the 4,000-square-foot, 4 bedroom 5 1/2 bath home took nearly three years. Because there were some smaller rooms, most of the furniture had to be specially made. ”We designed everything-every bench, every bed, every dresser-to fit the available space with perfect proportions,” says Ferguson. The settee in the hall, for example, is a custom Old Hickory piece, upholstered with a vibrant rug. “Every time there was a decision to be made, our ‘go-to’ was the most beautiful solution,” Ferguson says. 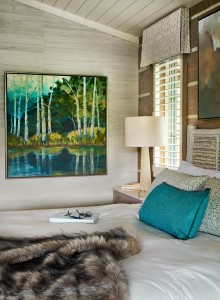 The main bedroom features specially commissioned paintings of aspens and cloud formations by artist M. A. Maitland; blue accents were inspired by the bright blue color of the Colorado sky.

Anne Cook remembers her husband’s concern during the planning and construction when he often said: “Log homes can be dark and depressing.” To which Anne replied: “Don’t worry. This will be something unlike anything you’ve ever seen before.” And, indeed, the Cooks’ cabin is a light, bright colorful home, full of meaning for the couple and their family. 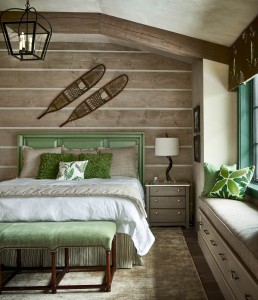 The main floor guest suite has a restful green palette and maintains a rustic style with log siding, beams, and vintage snowshoes. 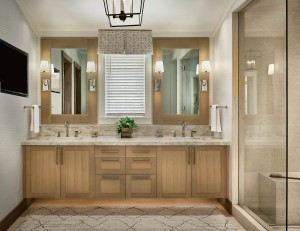 The main bath is simple and serene.

EMBRACE TRADITIONAL CABIN-STYLE ARCHITECTURE and interior log siding, using it to create a warm, textured background. Then, focus on natural light and strategically placed color to spin a chic (but somewhat unconventional) backdrop for contemporary art. KEEP THE REST OF THE INTERIOR UNDERSTATED so the art and color can “speak to one another” as the eye travels through the spaces. DON’T BE AFRAID OF COLOR. If used carefully, it will lighten, brighten and enliven a room. In the Cooks’ house, a powerful red rug in the living/dining room and vibrant red ceiling in the kitchen provide welcome energy. USE RUSTIC ACCENTS SPARINGLY. Maybe an up-lit canoe, a twig table, just a very few Black Forest pieces, sculptural wooden skis or snowshoes. CHOOSE SIMPLE, NEUTRAL FURNISHINGS to create a cohesive overall design and one that will stand the test of time and provide enjoyment for future generations. 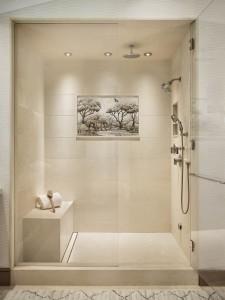 Cook is an artist by trade and training. “I love anything having to do with design,” she says. She especially enjoyed photographing the deer that frequent the property. Inspired by a mosaic on the wall of Basalt, Colorado-based Decorative Materials, the concept for a mosaic mural (based on Cook’s photographs) was born. Cook worked closely with Decorative Materials to get the details right. “We wanted to put it as a feature in the master bathroom shower,” says interior designer Ann Ferguson. Like everything else in the home, the mosaic has a special meaning and a wonderfully personal story.