An array of reclaimed woods, piles of plush textiles and never-ending views of Colorado’s Roaring Fork Valley come together seamlessly in a Texas couple’s lookout lodge

Like many Texans, this Houston-based couple have spent their fair share of winters skiing in the Rocky Mountains. They were regulars with their children in Telluride, Colorado, for years until a fateful visit to Snowmass Village, near Aspen, about eight years ago. “We stayed with friends who had a cabin at the Roaring Fork Club, and we fell in love with the area,” the husband says. They joined the club and bided their time, knowing they would one day build their very own vacation home when they found the right property. 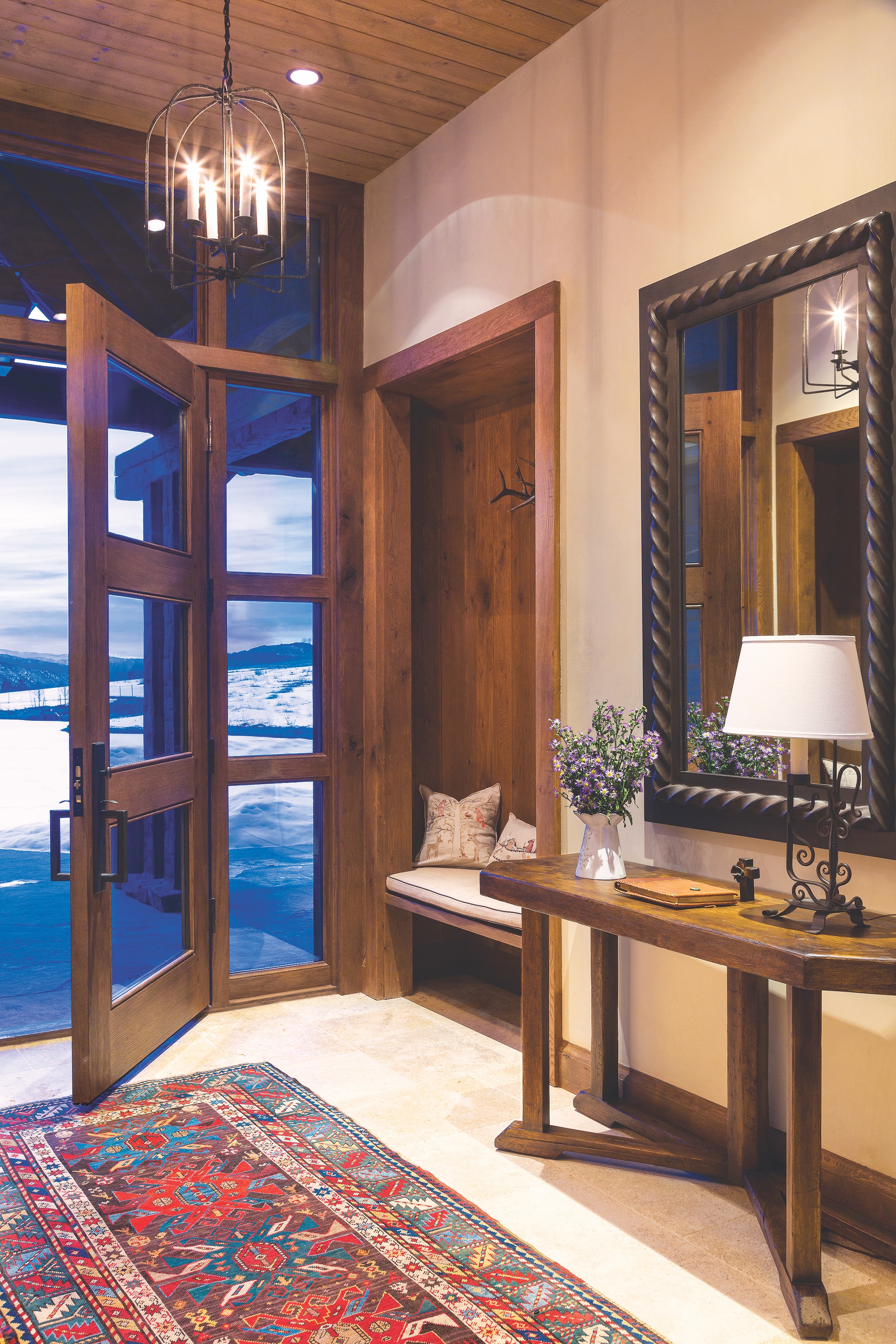 The inviting entry is a mix of rustic sophistication thanks to limestone floors, dark wood finishes and plaster walls.

Their patience paid off when they heard about two adjacent eight-acre plots of land that checked every single box on their considerable list of must-haves. “The lot felt somewhat like a ‘country property,’” the husband says, “but it was located in a gated community about 10 miles from Snowmass Village, roughly 12 miles from the Aspen Pitkin County Airport and a mile from the Roaring Fork Club.” And then there were the incredible views that the property offered. “We saw it and bought it pretty much all in one day,” recalls the wife. 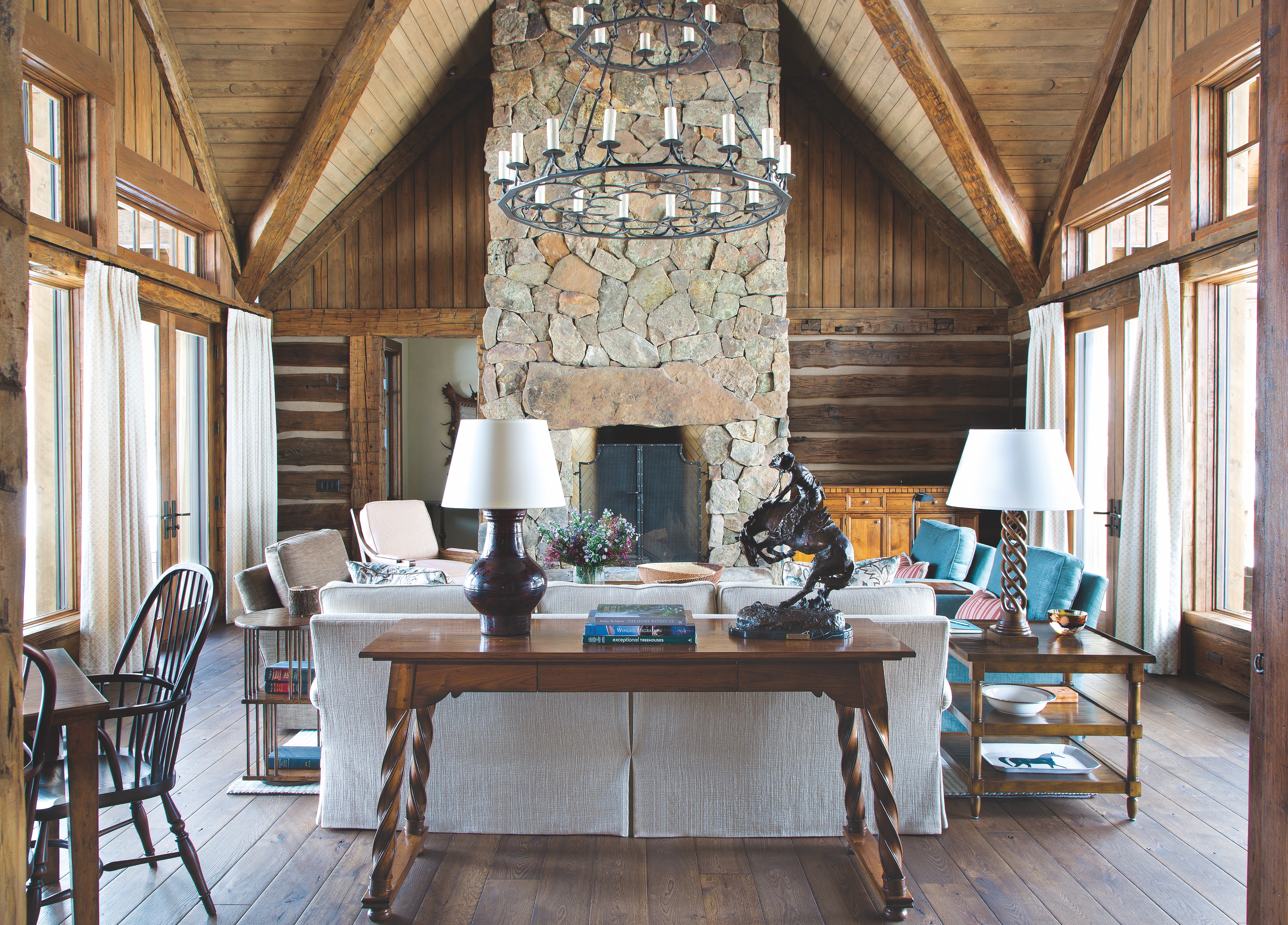 When it came time to draw up plans for a “classic Colorado” mountain home, the homeowners were just as selective in assembling their dream team. Enter Aspen-based architect Richard Mullen of Demesne and interior designer Barbara Glass Mullen of Barbara Glass Inc. “From the beginning, Barbara and Richard were willing to listen to our desires and aims,” says the husband. “We wanted a real log cabin feel, and they understood that.” 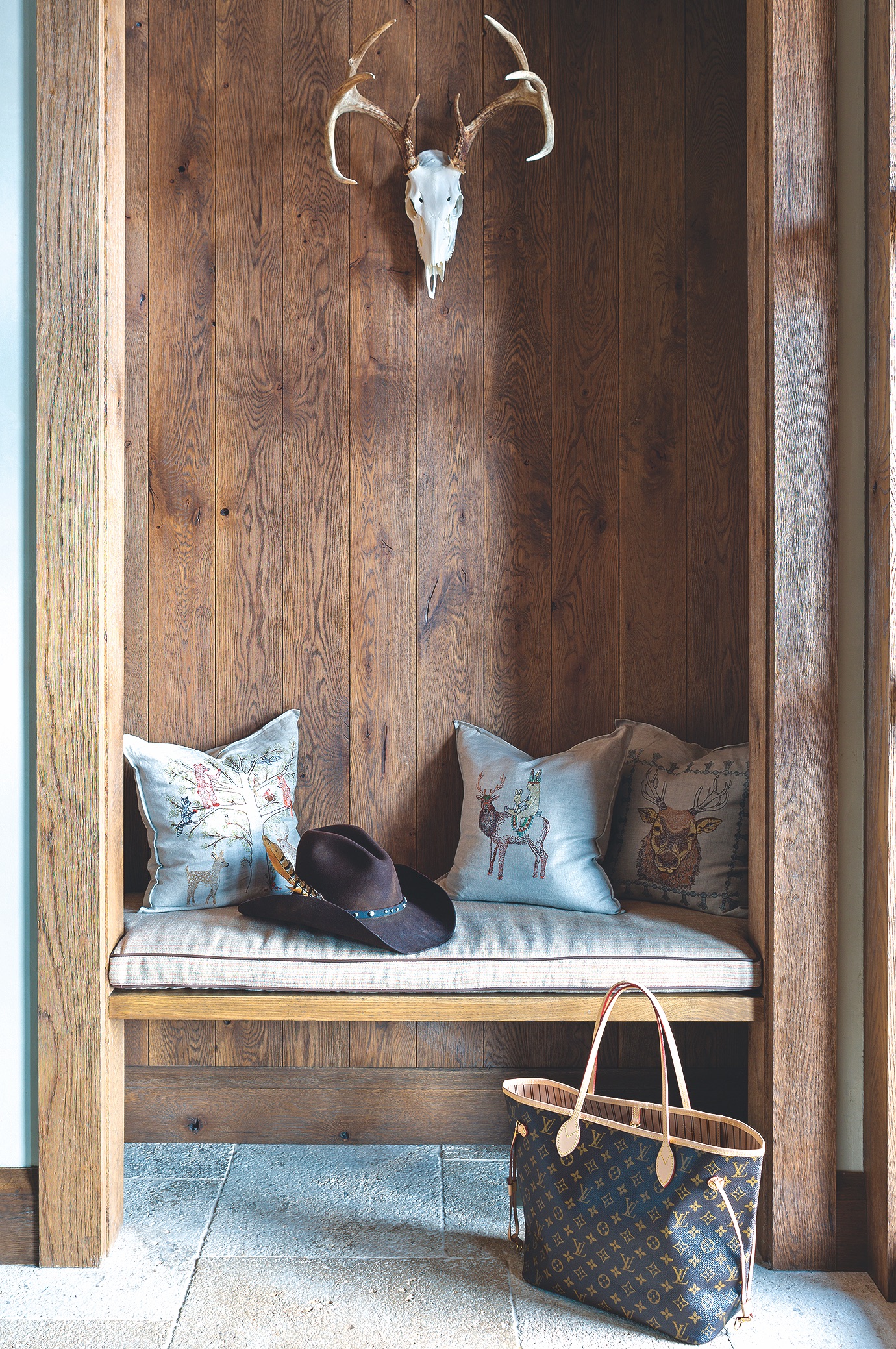 A cozy nook in the entry, decorated with a trio of animal-themed pillows from Coral & Tusk, is the perfect spot for afternoon reading.

In order to create a true cabin-in-the-woods experience, Mullen proposed siting the 8,600-square-foot house in a hollow located between two hills. With that decided, construction began—and no detail was overlooked along the way, with the final project taking 15 months to complete.

Friends and family can help themselves to an après-ski drink in the great room’s built-in bar and then recharge on comfortable seating by Cameron Collection.

The grounds were enhanced with a large pond and creek. Inside, truckloads of reclaimed wood in a number of species including oak, Douglas fir and hemlock were carefully assembled and then painstakingly stained. Even finding the ideal stone for the fireplace in the great room took three tries. The team finally agreed on a moss stone, which despite its Oklahoma provenance has, Mullen says, a real Colorado “agricultural” aesthetic and seamlessly blends with the colors that surround the house. 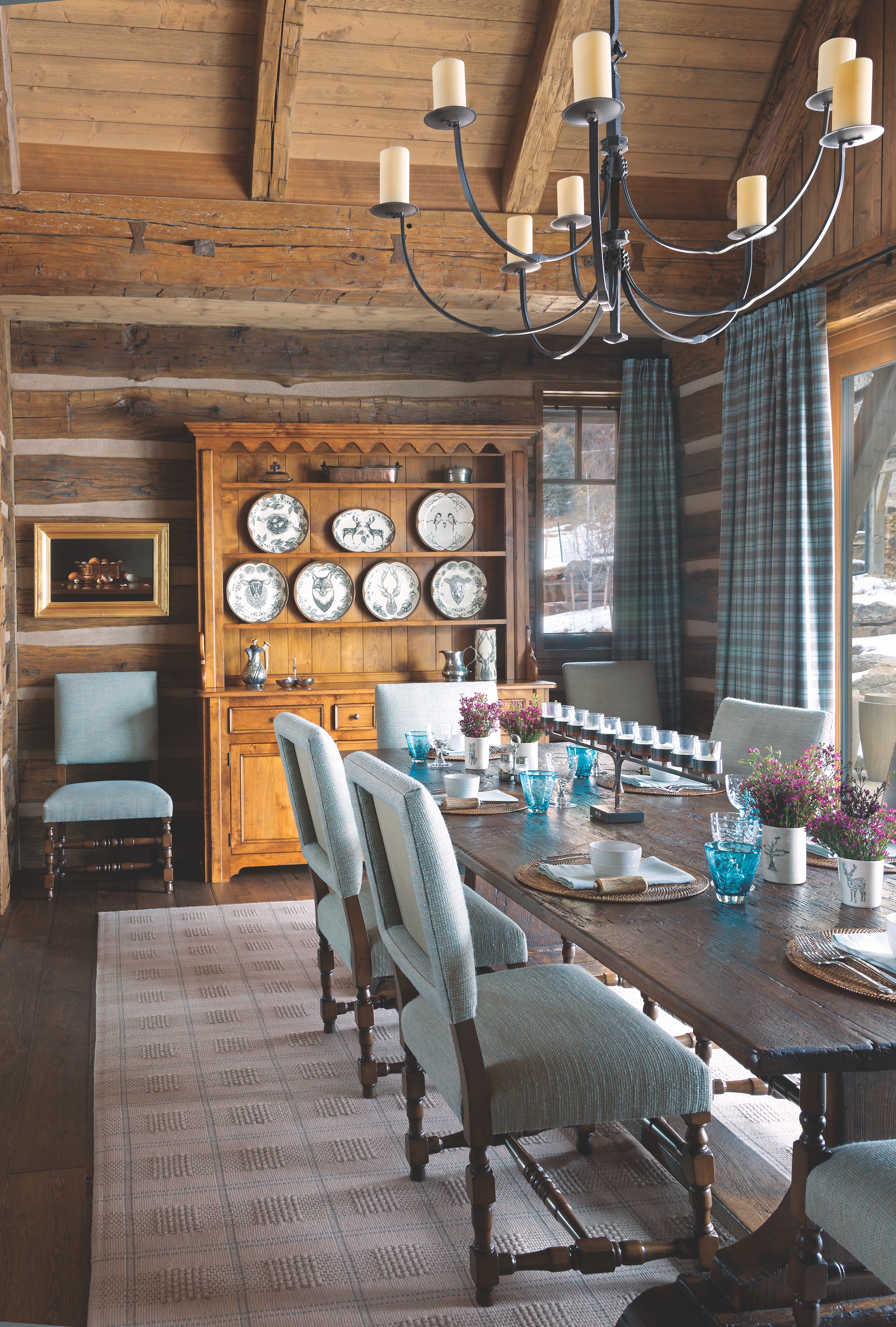 Every Christmas, the family gathers beneath a Rose Tarlow chandelier at the custom-made dining table surrounded by Artistic Frame chairs covered in Rogers & Goffigon fabric. The hutch by Old Timber Table displays the homeowners’ collection of ceramics by Laura Zindel (sourced through Houston’s Kuhl-Linscomb).

And then there was the chinking, which is the term for mortar used to seal the joints of a log cabin. The hunt for the ideal hue for the sealant was a journey of its own. “We spent an inordinate amount of time finding the right color for the chinking to go between the wood planks,” the husband says. “We ended up coming up with our own formula—a color that really enhances the reclaimed wood planks. It has such a huge impact because it adds so much warmth, and more importantly, it looks so authentic.” 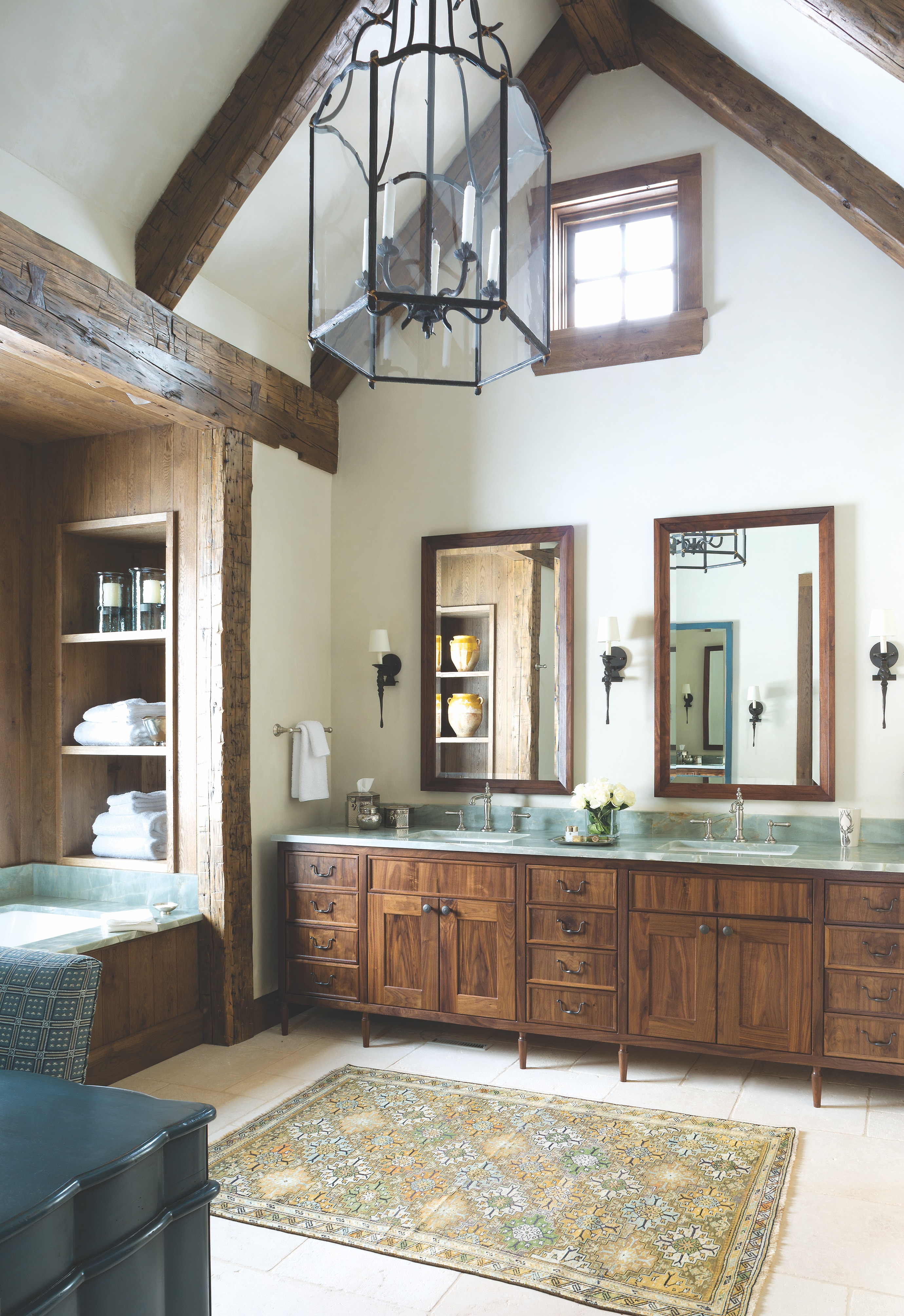 Rough-hewn reclaimed beams meet all manner of refinement in the grand his-and-her bathroom. Custom walnut vanities (check out those legs!) are topped with green quartzite; antique French limestone floors are enhanced with an antique rug, and a large iron chandelier by Formations and sconces by Paul Ferrante add plenty of dramatic lighting.

Authenticity was also top of mind when it came time to furnish the home. The homeowners worked closely with Barbara Glass Mullen to fashion a space that felt collected over time by layering in graphic textiles, antique rugs, handmade pottery and custom furniture crafted from reclaimed wood. “I didn’t want it to feel like it was decorated all at once,” says Barbara Glass Mullen. “It’s more of a traditional home, so we chose pieces with special details, like turned legs, that make it feel timeless and cozy.” 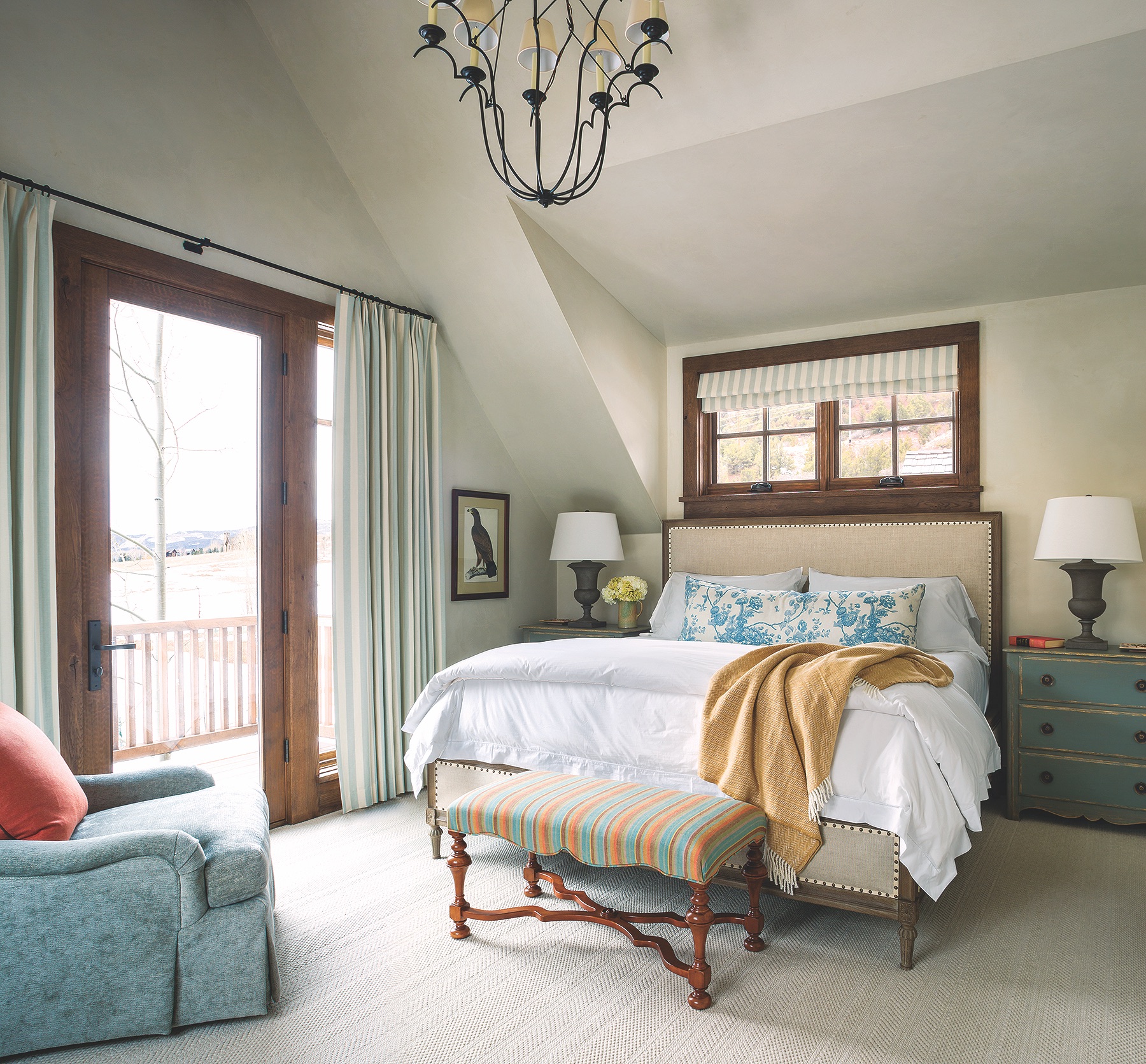 An abundance of neutrals makes for a restful retreat via a linen-covered “Maison” bed frame by Restoration Hardware, a simple stripe on the window treatment above and the wall-to-wall “Lorient” carpet by Bell- bridge. (“I love it because it almost looks like a cozy sweater pattern,” says the designer.)

Thanks to the thoughtful layout and the classic décor, there’s no place the homeowners and their now-adult children would rather meet to celebrate the holidays every year. Sure, the skiing is a plus, but staying in is also plenty of fun thanks to cozy fires, six well-appointed bedrooms, a basement decked out with a playroom and wine room, and plenty of other spots to relax while taking in the stunning views. Says the husband, “Our house is so well designed—you can take in spectacular sunrises and sunsets from the very same room. 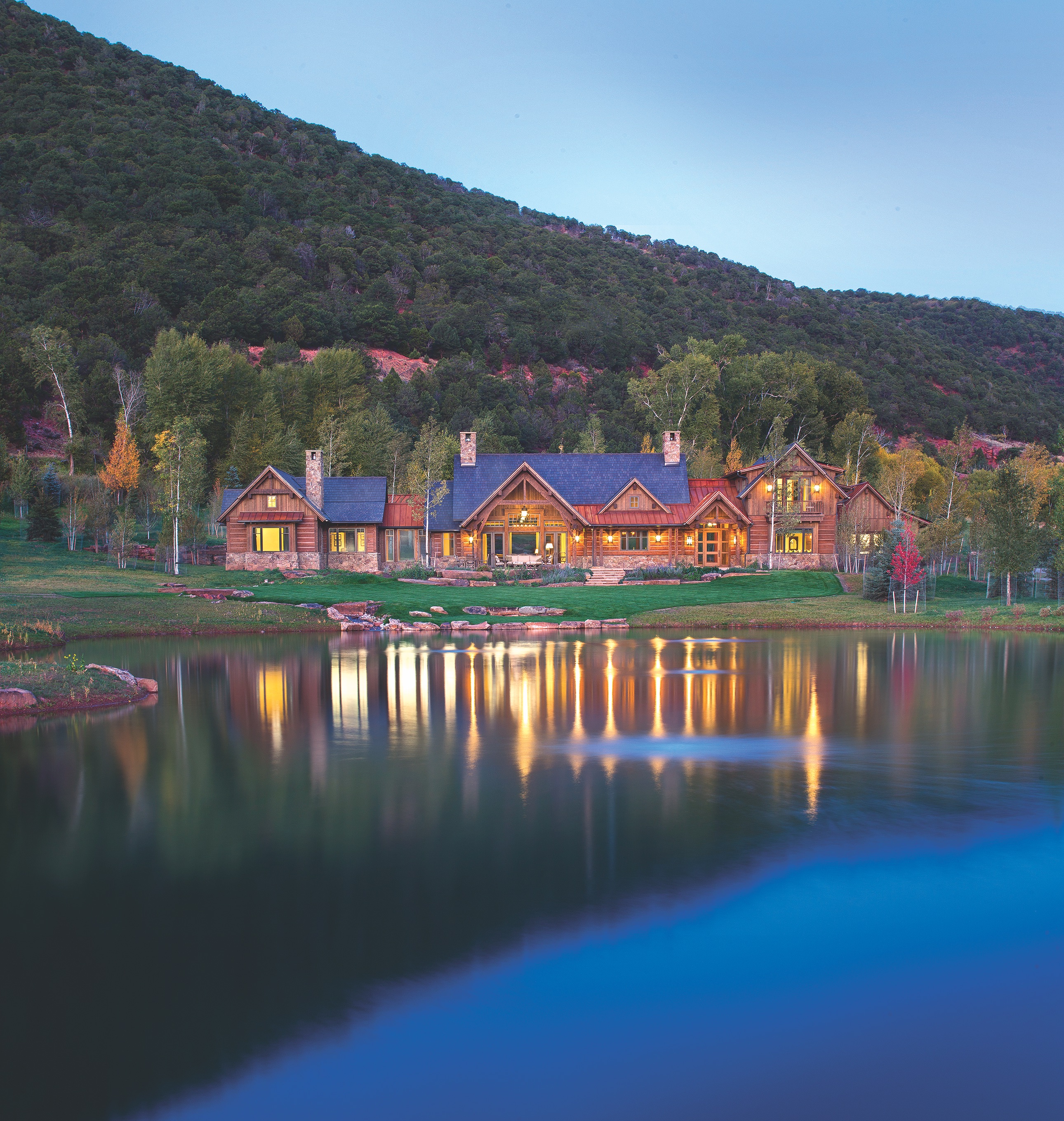 Lights from the lodge are reflected in the pond.

PLANKS + PASTELS “We have four distinct seasons here in Colorado, so there are countless shades to pull from,” says Barbara Glass Mullen. But rather than opting for the reddest of reds or the deepest of greens, she chose lighter pastels, which really pop against the abundance of darkly stained reclaimed woods. PILE ON THE PATTERNS Because the color palette is subtle, it allowed Barbara Glass Mullen to introduce plaids, stripes and even florals on furniture, pillows and window treatments. Aside from making rooms more interesting, pattern and texture keep pieces more user-friendly. “I made sure everything had a bit of texture, so when spills happen, they don’t read like they would on a plain, flat textile,” she says. PRETTY UP THE PRACTICAL Mudrooms may be a necessity in Colorado, but “must-have” doesn’t have to mean “mundane.” Barbara Glass Mullen installed hardworking lockers adorned with wire mesh, which adds beautiful texture while also allowing smellier ski gear a chance to air out. A large island—painted the same blue-green hue as the adjacent bench’s cushion—brings a sense of whimsy to the workspace.