A Light and Bright Home in Wilson, Wyoming

A home at the base of Teton Pass nods to tradition, embraces modernity, and basks in the sun

At the base of Teton Pass in Wilson, Wyoming, architect Eric Logan found a unique challenge: design a home that marries traditional forms with a modern vibe and transforms Wyoming’s intense (if fickle) sunshine into a pleasant houseguest.

The homeowners, a couple with three children, live in Wilson year-round; there would be no escaping to less capricious climes. “They were interested in light and bright spaces, and a simple materials palette,” says Logan, principal of Carney Logan Burke Architects in Jackson. “And they wanted something less traditional” than Jackson’s prevailing architecture.

But the neighborhood’s relatively conservative design guidelines meant that Logan would need to get creative. First, he sited the home on an east-west axis on the 3.5-acre property to capture the most warmth and light from the sun. Then he and his team created a plan to divide the 6,500-square-foot home into three different building forms. In the center stands a one-story living pavilion topped by a broad roofline. This airy space is flanked by a pair of two-story “pods” with gabled rooflines set perpendicular to one another. One pod contains the children’s bedrooms, with the garage, mudroom and a wine storage space below them. In the other, the master suite tops guest quarters and a media room. The three forms surround an intimate, south-facing courtyard, ideal for dining al fresco.

The strategy delivered a design victory: The front of the home suits the neighborhood’s traditional bent, while the back satisfies the owners’ desire for a modern pedigree. Plus, “it allowed us to create narrower building forms that can deliver natural light and cross-ventilation more easily than a thick building would,” Logan says.

The design also considers Wyoming’s wily weather, says landscape designer Mark Hershberger, principal of Jackson-based Hershberger Design. “We looked at the entire perimeter of the building and designed for outdoor living in different places at different times of day,” he explains. For example, when the sun is beating down on the south-facing courtyard, the family can lounge in the outdoor seating area on the north side. Hershberger’s team also found spaces for a shade garden, a kitchen garden, and even an expanse of bluegrass lawn for the children to play on.

But the most spectacular of the outdoor spaces is an extension of the home’s living room. The “aircraft-carrier-esque” roofline from the home’s central pavilion stretches west, toward a pond and wetlands on the property’s edge. The sitting area beneath is an ideal spot for viewing the wildlife attracted by the water. “Sitting there is all about the views and big, open spaces,” Logan says.

Inside, the home responds to a view of a different sort: an heirloom kimono given to the homeowner by her father. “We had to place the kimono carefully; it needed to be prominent without becoming a trophy, like a buffalo head over the fireplace,” Logan explains. They chose a display area between the entry and the living spaces. “The kimono certainly influenced our thoughts during the development of the home’s interiors,” he adds.

The interpretation is hardly literal. For example, the open-riser staircase off the entry is paired with a shoji-inspired wooden screen. “We mirrored the materials palette used throughout the house and created a light, open staircase because the adjacent windows face south,” Logan says. The result is a horizontal pattern of light that plays on the stairs and floor below, changing as the sun moves.

The horizontal glass forms in the front entry echo this pattern. “The entry—with the kimono and the glass and the staircase—is where you get dipped in the home’s identity,” Logan says.

In the kitchen, the design team created a light, almost porous feel by setting the cabinets off as objects—what Logan calls “individual floating components”—instead of lining the walls with them. A frosted-glass cabinet floats over the kitchen island, hinting at the horizontal elements in other rooms, while the vertical grain of the sapele wood cabinets gives subtle contrast.

The remaining elements are simple: smooth white plaster walls with matching baseboard to hide the millwork. Where it’s not plaster, the ceiling is covered in hemlock planks; the floor, in hickory. “When you choose a refined take on materials, the effect is timeless,” Logan says. “This home isn’t intended to be trendy or categorized in a style.” Just don’t tell the neighbors. 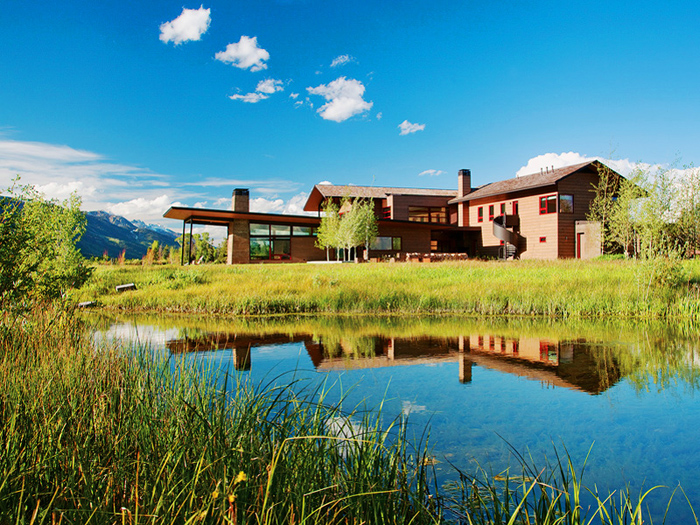 Architect Eric Logan tipped his hat to traditional architectural forms with the home's gabled roofs, but his interpretation is playful: Notice the off-center ridge and slightly longer overhang on the right. The east-west axis and abundant glass help the home capture natural light and warmth. 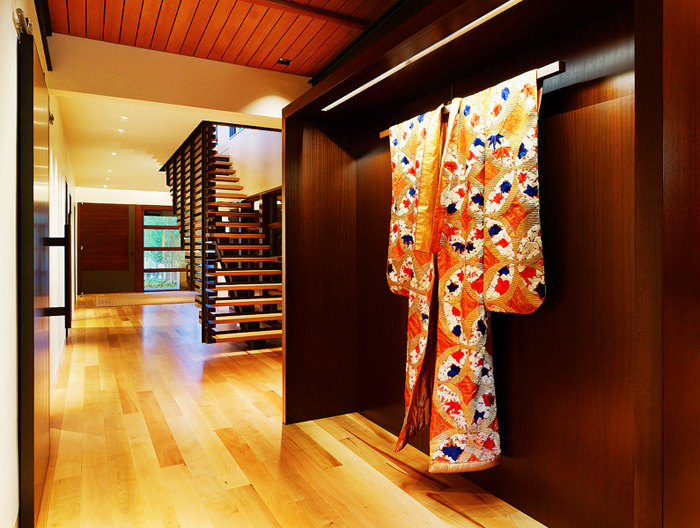 An heirloom kimono feels less like a showpiece and more like a part of the home's architecture thanks to a thoughtfully designed display area between the entry and living spaces. 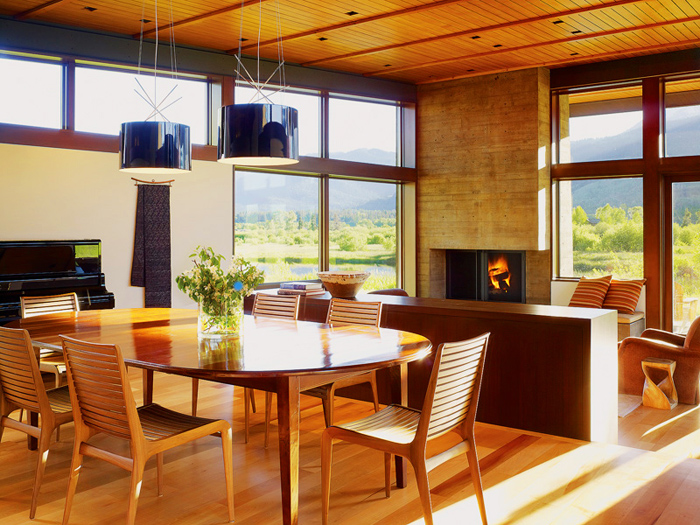 The living room is anchored by a cast-in-place fireplace chimney. Many of the room's windows and doors open to the expensive west-facing outdoor space. 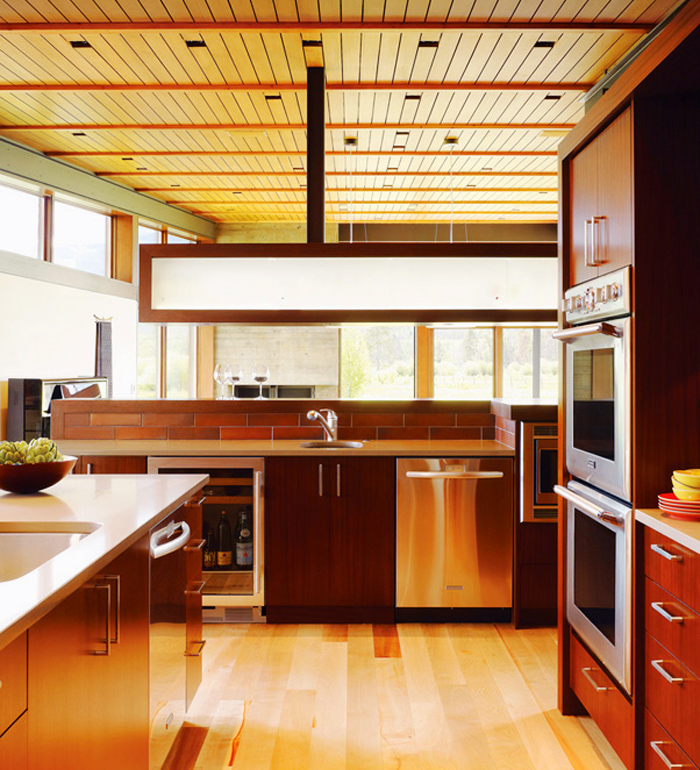 "We deliberately set the built-ins off visually as objects," architect Eric Logan says of the kitchen cabinets. Made of sapele wood, they contrast pleasantly with the light hickory floor. 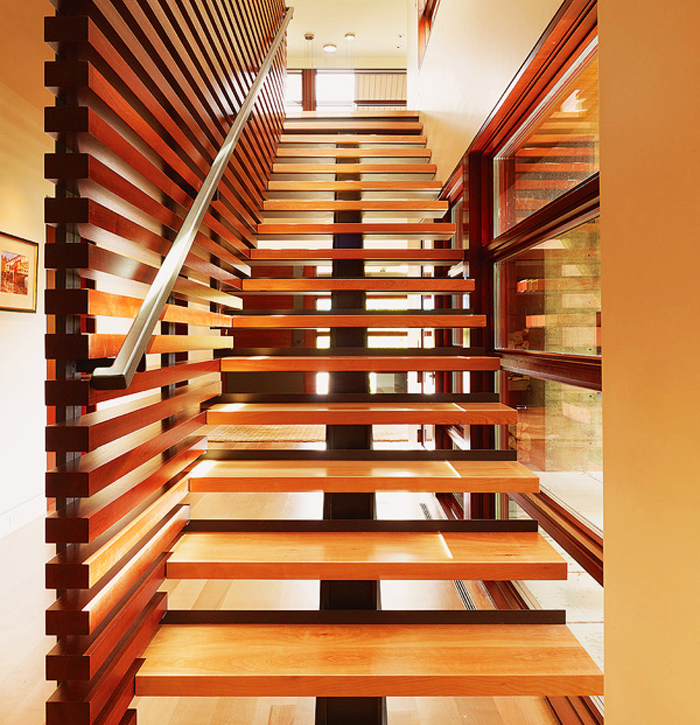 The sculptural, open-riser staircase "was an opportunity to make something beautiful," Logan says. "It becomes a lantern that filters light all day long." 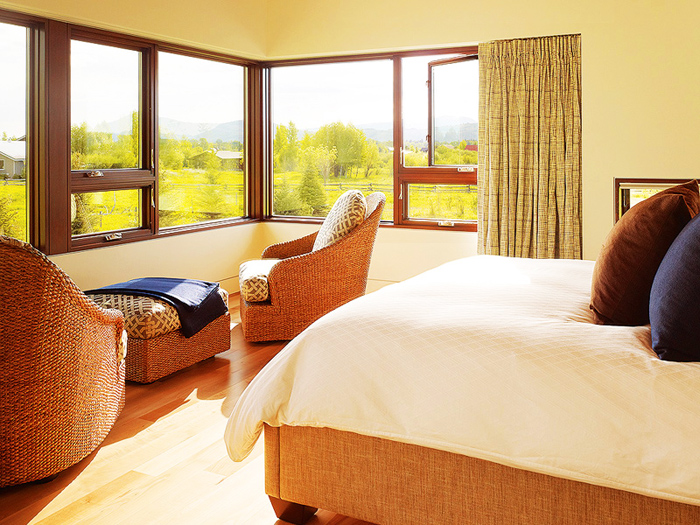 The home's interior palette—from finishes to furnishings—is warm and neutral, so as not to compete with the verdant views outside. 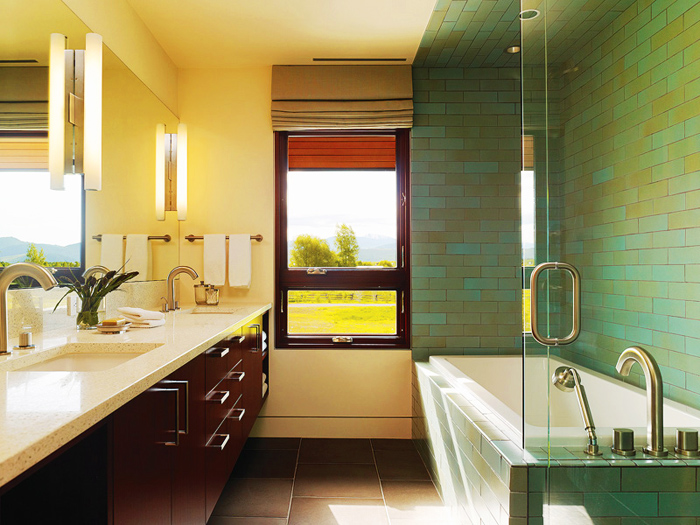 The master bath's floating vanity is made of the same FSC-certified sapele wood as the kitchen cabinets. The tile is from Sausalito, Calif.-based Heath Ceramics. 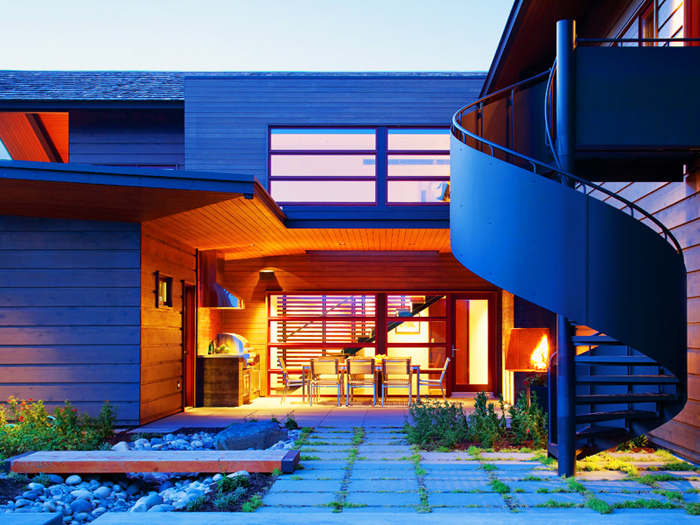 A spiral steel staircase leads from the children's bedrooms to the intimate, south-facing courtyard. "It's a sculptural piece that we designed to be seen from the courtyard and from within the house," Logan says.

PARE IT DOWN
The Secret to a Perfect Palette
To achieve a sophisticated, warm design, challenge yourself to limit your materials palette. “A little bit of everything never works,” Logan says. Here, a guide to the prevailing materials in this home:

CEDAR SIDING
If you just can’t commit to one exterior material, take a cue from this home and choose two types of siding made of the same material in the same stain. The difference is in the width and profile of the boards, giving subtle texture.

CAST-IN-PLACE CONCRETE
Choose one or two bold exterior elements (such as the cast-in-concrete chimney here) rather than many smaller ones. Concrete can add a strong, modern element, especially if you’ve chosen a more traditional exterior material, such as wood, as the predominant material.

INTERIOR WOODS
The kitchen cabinets and the shoji-inspired screen by the interior staircase were made from sapele, which is similar to (but more durable than) mahogany. The floor and stair treads are hickory; the ceiling, hemlock. By carefully editing the wood palette, Logan brought unity to the home’s interior spaces.

GLASS
Some of the larger panes of glass in this home don’t open. “They’re more abstract; they’re about the views and the light,” Logan says. Not all windows have to be operable, as long as the design allows for plenty of cross-ventilation.