A Home With Lakeside Allure

On Tahoe’s west shore, a family embraces all that summer has to offer while making new memories 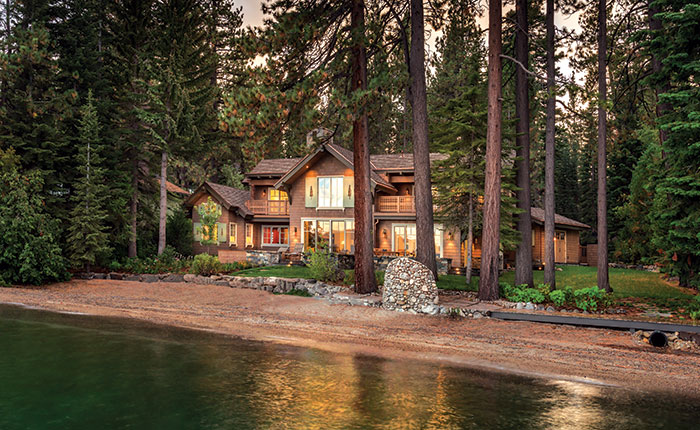 Memories have a way of influencing actions we take much later in life. When it was time to build their vacation home, a California couple wanted it to combine the favorite elements they remembered from holidays when they were growing up. “My husband went to Lake Tahoe after college, and I went there summers during my childhood,” the homeowner says of the popular resort setting in the Sierra Nevada. “I also spent summers in New England, so we ended up with a home that’s a cross between the East and old Tahoe.” 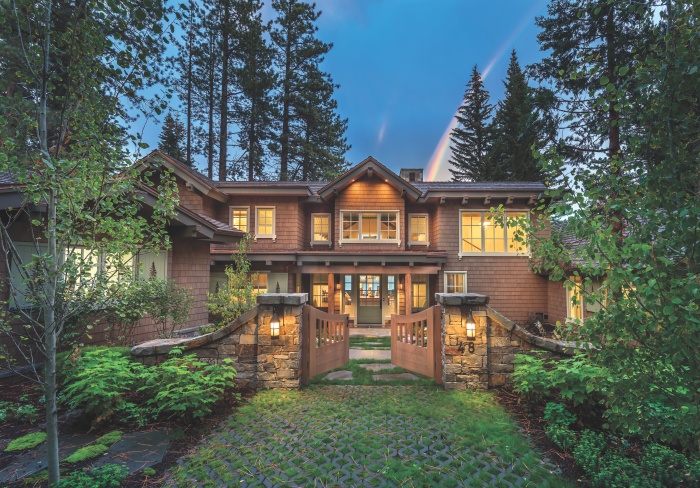 The couple found the perfect site with a sandy beach and stone fireplace on the lake’s west shore, but the existing 1970s home on the site was dark and dated—so renovating it wasn’t in the cards. With the help Scott Gillespie, principal of Sandbox, they were able to recycle some of the original home’s redwood for interior paneling and use logs from felled trees as deck railing supports. To make the best use of the site, “We stretched the house out horizontally to capture the view,” Gillespie says. And it makes a strong first impression. When visitors enter through a curved clear cedar gate and approach the house, the lake is visible through glass panels on the front door. 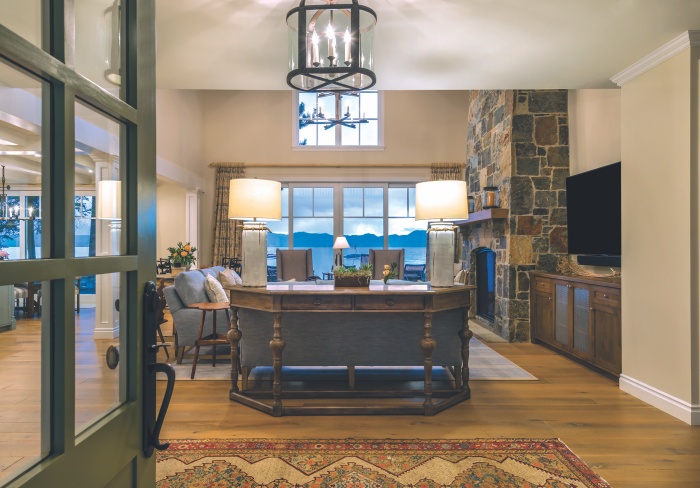 In the entry, Currey & Company lamps on a Chaddock table frame views of the lake. 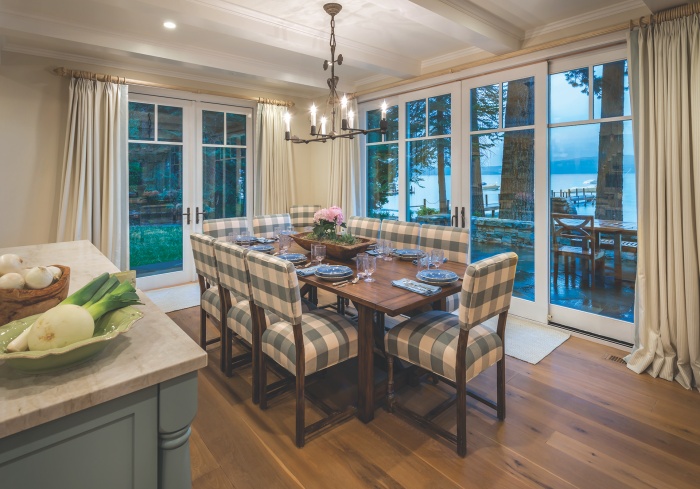 The residence gets used year-round but is busiest in the summer, when the couple and their six kids (ages 19-34), two grandchildren and friends descend on the property. “They host large family gatherings, so having lots of sleeping space was really important to them,” Gillespie says. Completed in 2017, the five-bedroom, five-and-a-half bathroom home has areas inside and out where they enjoy congregating. 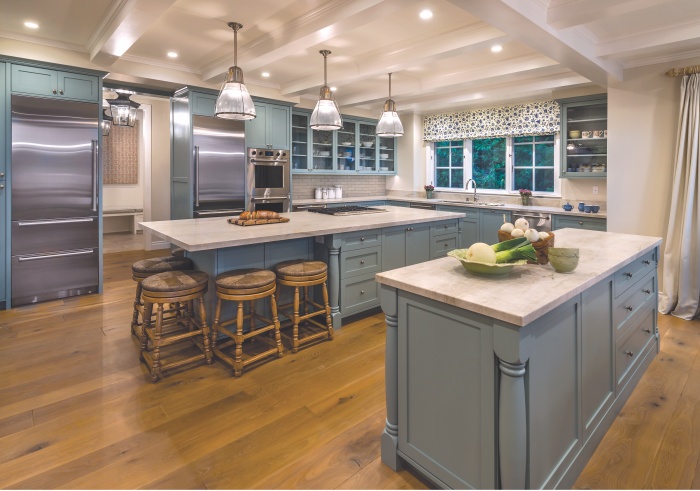 The spacious kitchen has, like Noah’s ark, two of everything: islands, refrigerators, ovens and dishwashers. When the house is full on July 4 and other holidays, they make good use of the appliances, the homeowner says, noting, “I don’t like a cramped refrigerator.”

While the kitchen is certainly a gathering spot, on any given summer day, family members scatter to go on hikes or ride bikes on local trails. Water sports include wake surfing, kayaking, stand-up paddleboarding and taking late afternoon boat cruises. 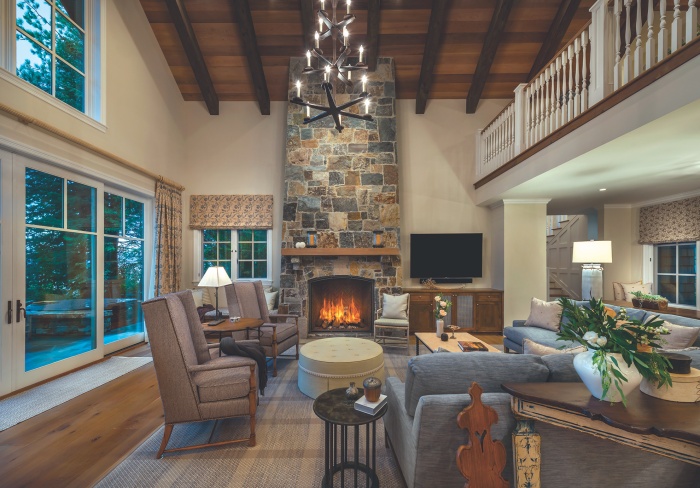 Facing east-northeast, the home is protected from the wind, and the sky takes on a pink and purple cast as the sun sets behind it in the west. “It’s a fantastic orientation to the lake,” Gillespie says. A fire pit near the house is a favorite gathering spot in the evening after meals, as are wood fires in the original stone fireplace on the beach. 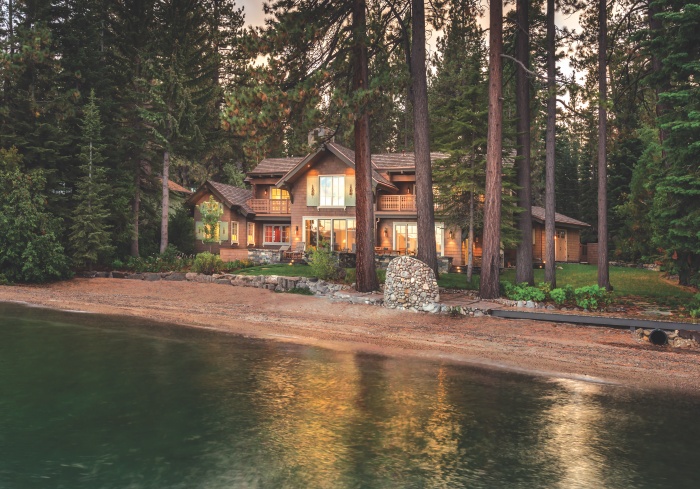 A blend of western and eastern American vernaculars, a Lake Tahoe vacation home is rimmed by tall pines. The stone fireplace on the beach is original to the property, while trees felled for construction were used to make posts for the balconies on the home’s upper floor. Shutters feature custom fir tree cutouts.

Since the family spends so much time outdoors, the patios and landscape were also a priority. Again, a blend of styles prevails. “She wanted every square inch dialed in and for it to have an English-style garden feel in a mountain setting,” says Patrick McEnany of High West Landscape Architects. 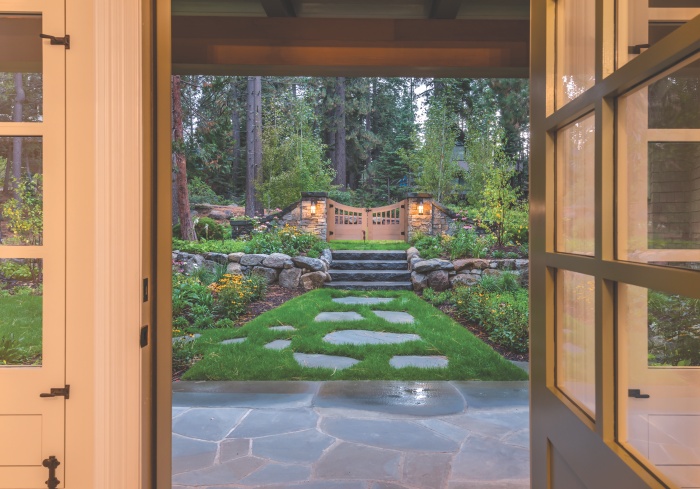 English-style gardens are densely planted with perennials and shrubs.

Stepping-stone paths wind around the house and down to the lake. Perennial gardens feature peonies, coral bells, day lilies, hostas and many other varieties, while moss adds a soft texture between stones on the paths. “Even after the first year, the garden was amazing,” says the homeowner. “It is incredible how full it looked. Not a month goes by when we don’t use the house, but we really love it in the summer.” 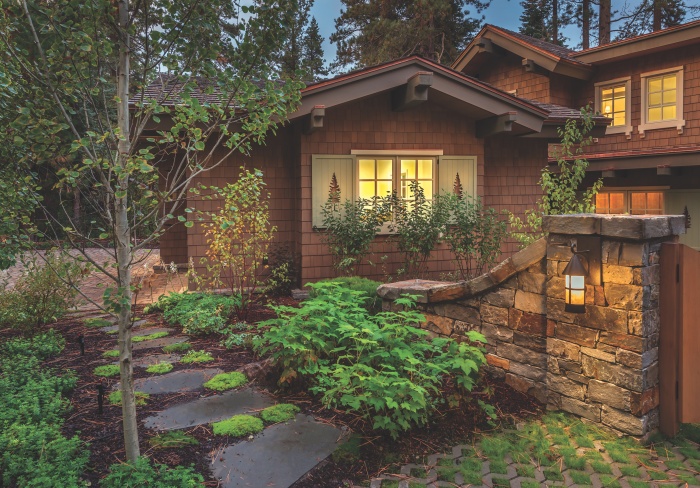 A Jackson Home That Promotes Wellness