A Home Full of Vintage Finds

Antiques dealer Liz Spradling jokes that her home in Jackson, Wyoming, is her “leftover house” — full of antiques and vintage finds that were once for sale in her eponymous Houston boutique. “I looked around my shop and picked out pieces that feel well-worn, rustic, with beautiful patinas,” she says. “They work well in the West without feeling Western."

She’s right. Her home’s style is an enviable combination of sophistication and ease, courtesy of pieces that reflect many centuries of craftsmanship from Spain, Italy, France, Belgium, Morocco, South Africa and China. All joking aside, it’s clear the home’s collection is a carefully crafted homage to history and beauty.

From the start, Spradling envisioned a clean-lined canvas for her collection. Local architecture firm Hoyt/CTA Architects Engineers helped her design an open floor plan that places the dining room, kitchen, reading nook and great room within view of each other. “The idea is that we can invite our friends and family up and all be together whether we’re cooking or eating or cleaning up or reading,” Spradling says. In this airy space, the plaster walls—a nod to the Old World—feel textural and warm, while the lack of moldings makes the home’s style feel set apart from the typical Wyoming design vernacular. The antique wood beams were reclaimed from a nearby ranch and add timeless, rustic charm. And the cobblestones that cover the entry floor and mudroom were salvaged from Chicago streets. “This house could really be anywhere in the world,” Spradling says. “It has simple, organic forms and very little ornamentation.”

Spradling did all of the design work herself, selecting a neutral palette against which she could highlight her favorite antique furnishings and accessories. “I chose fabrics with wonderful textures rather than patterns,” she explains. “That’s my whole design concept. I prefer to draw attention to the furnishings themselves. Each piece has its own story to tell.”

She knows these stories well: Spradling selects every item for her shop, traveling to Europe several times a year in search of pieces that speak to her. As a result, wandering through her home is a lesson in history. In the sunny reading nook, an 18th-century landowner’s table from Italy stands beneath the windows. Its top slides off to reveal secret storage places where a landowner would hide the money he collected from his tenants. On the adjacent wall hang 16th-century Spanish ceiling tiles called socarrats that “look like modern art,” Spradling says. Not far away, in the TV room, a sculptural iron bottle-drying rack from Arras, France, is a captivating piece of art. Nineteenth- and early-20th-century French families would dry their empty wine bottles on these racks before returning to the vintner for refills. In the stairway leading up to the second-floor bedrooms, Spradling hung an 18th-century iron weathervane with a cross, which came from a small village in Spain.

What’s most remarkable is that despite the breadth of history and geography represented by the antiques, the home’s style feels cohesive and fresh. The great room is the perfect study in this unity: Wingback chairs flank a zebra-skin-covered ottoman, and two small 20th-century industrial stools stand nearby. An 18th-century Aubusson tapestry hangs above a console made of 20th-century wicker-and-iron laundry baskets, topped with a thick Texas fossil stone. And the crown jewel is a piece of plaster ornamentation pulled from a Chicago building.

Spradling says that while there’s no formula for this alchemy, mixing styles and eras is the best way to give a home depth and appeal. “Your eye can get lazy. You need things to wake it up again, just jar it a little,” she says. “Industrial pieces make antiques more interesting. Modern art looks great over an 18th-century table”—and even leftovers, given a new home, can be exquisite. 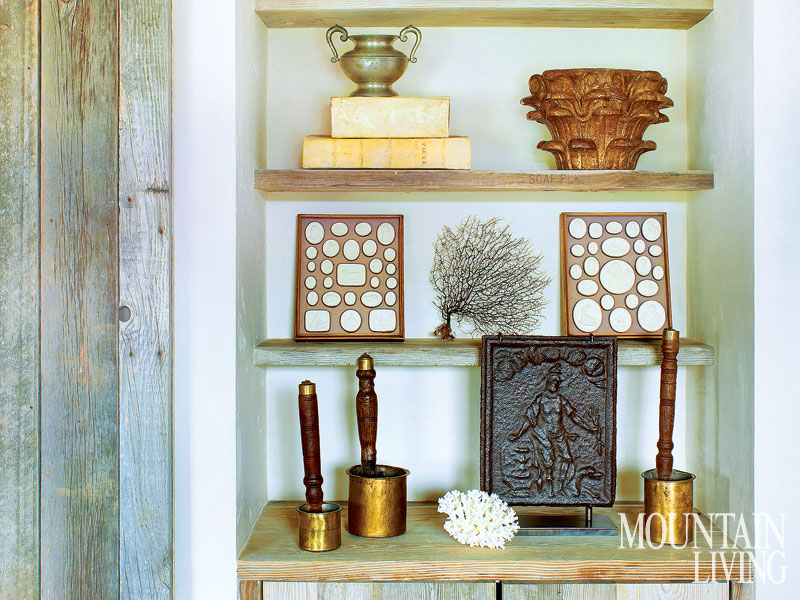 During the home's construction, Spradling discovered OSHA-approved wood planks on the job site. "They were this gorgeous weathered wood, and I knew they were what I wanted for the bookshelves in the game room," she says. She decorated them with collections of framed 18th-century plaster seals. 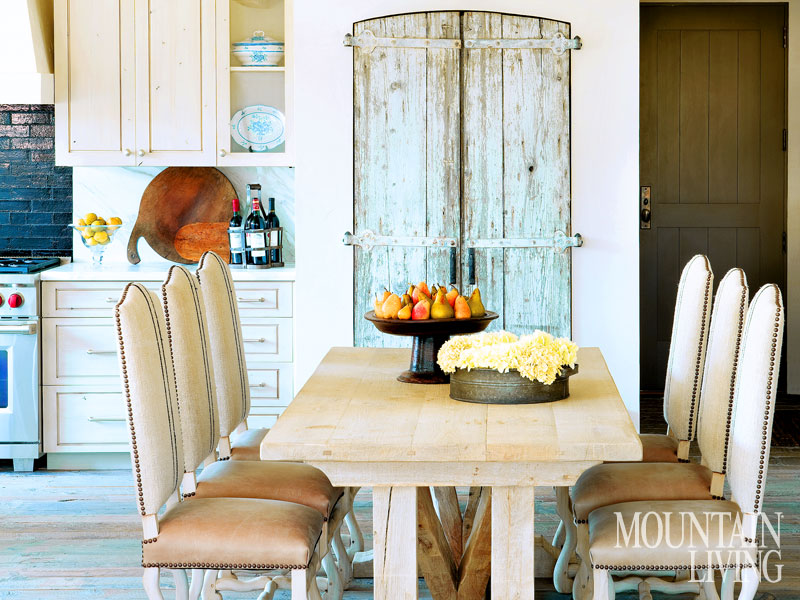 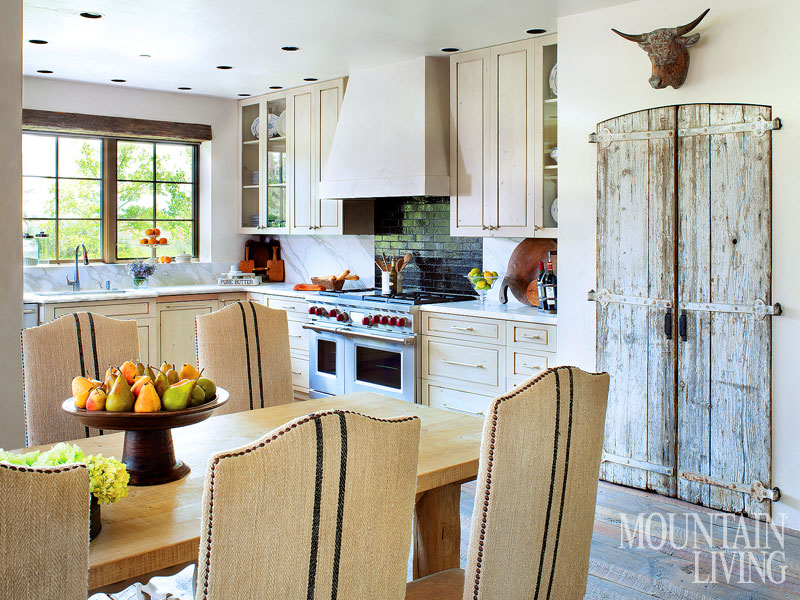 The classic kitchen gets a subtle historical nod from one of Spradling's favorite pieces: a 19th-century zinc bull's head that would have hung outside a butcher's shop in France. 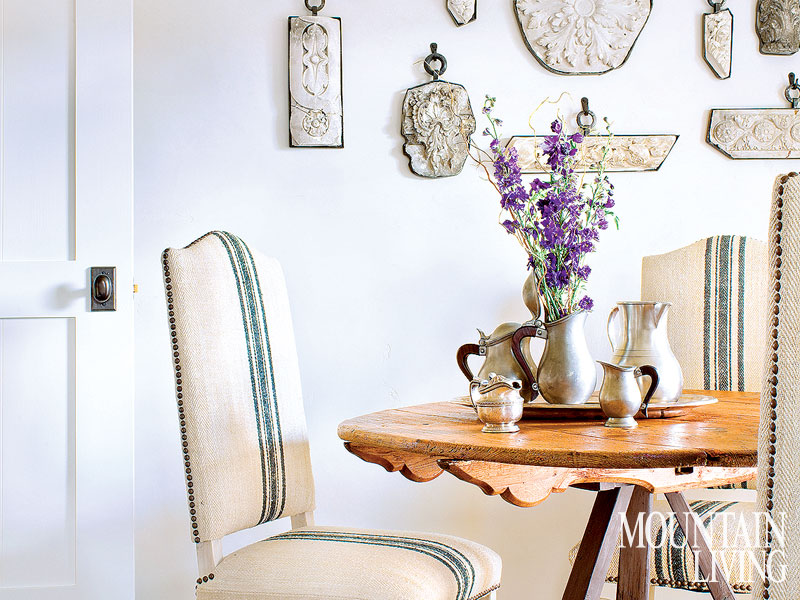 Spradling gathered these plaster fragments and hung them as an art installation in the game room. "There's something special about pulling together a grouping of things that were created to be functional but are also so beautiful," she says. 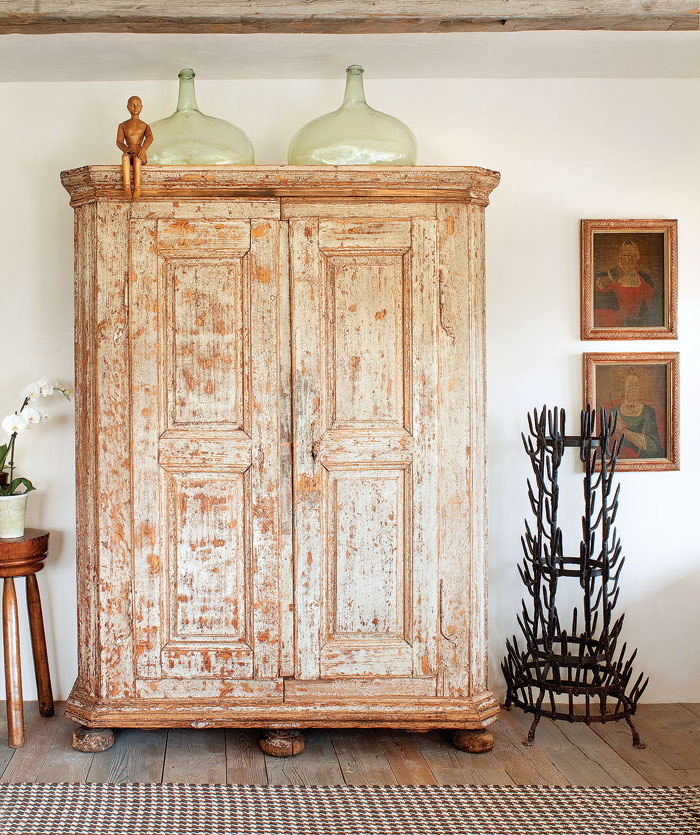 A wooden artist's model sits on the armoire in the TV room. Behind the model are antique cava bottles, whose unusual shape might have fostered the Spanish grapes' fermentation. The iron "sculpture" to the right is an antique bottle-dryer from Arras, a town in northern France known for its exquisite ironworks. 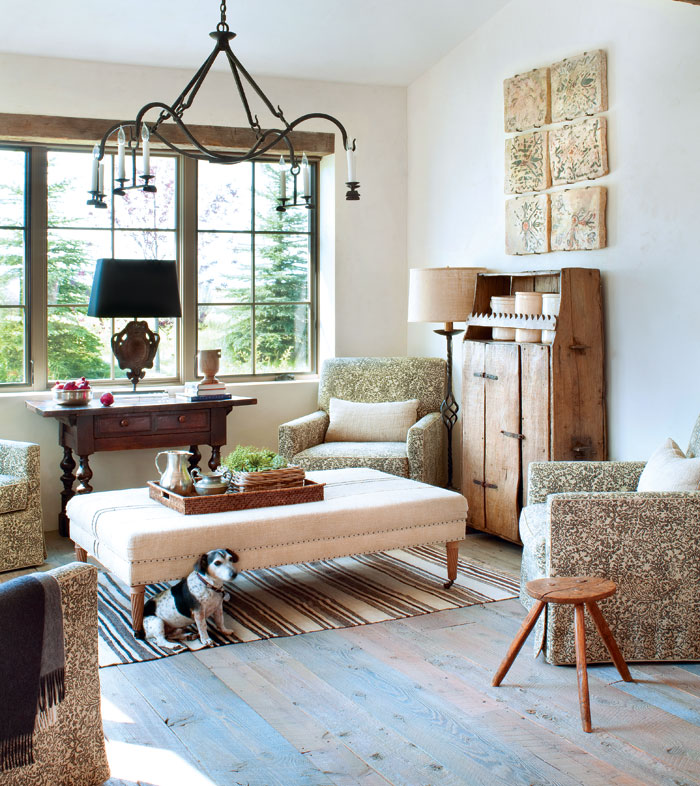 The reading nook is "everyone's favorite room," Spradling says. Above an 18th-century French folk-art cupboard hang 16th-century Spanish tiles. The table under the windows is an 18th-century landowner's table from Italy. 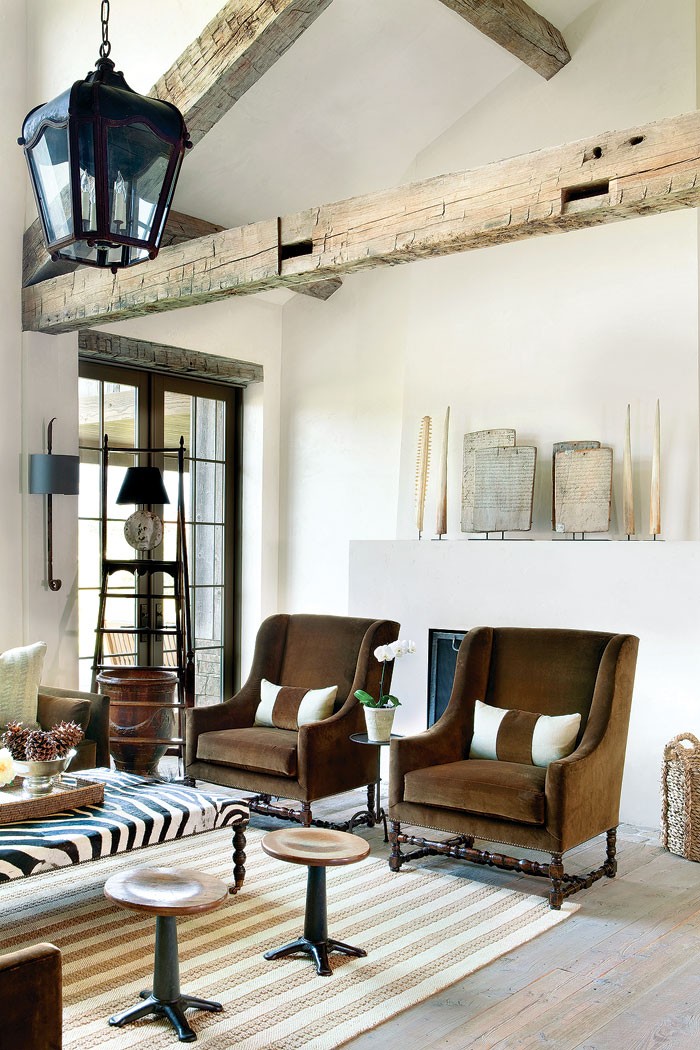 The great room's tall ceilings leave room for the library staircase Spradling uses in lieu of a table between the sofa and a wingback chair. 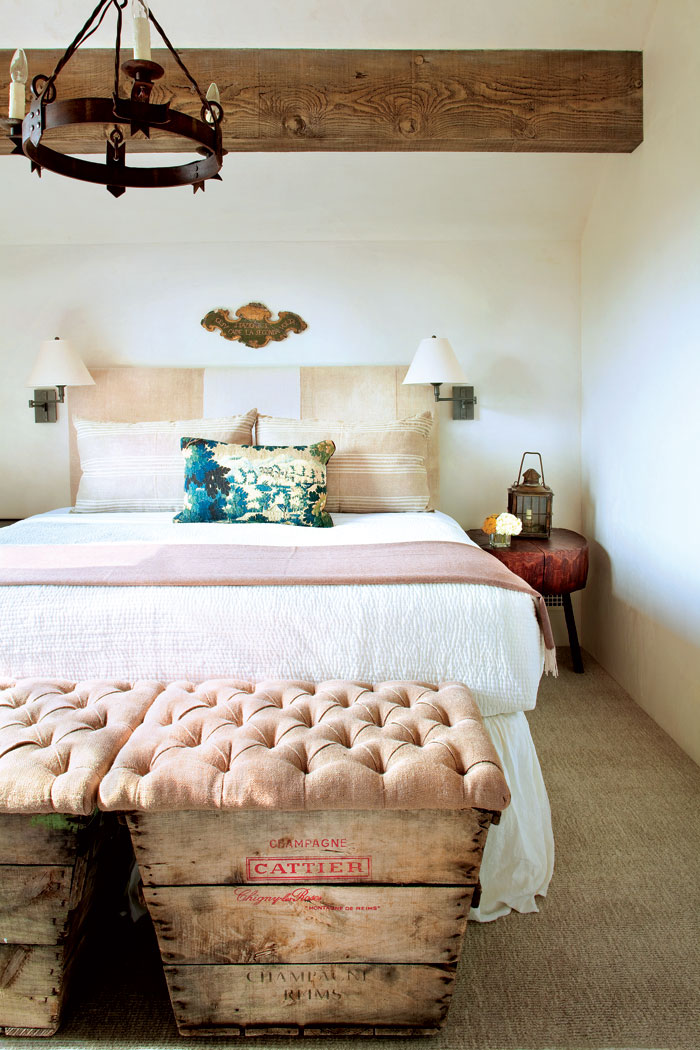 A station of the cross from an Italian church hands above a guest bed. The headboard fabric is a strip of 19th-century French thistle cloth, and at the foot of the bed are antique Champagne crates with tufted burlap tops, perfect for propping up suitcases or holding decorative pillows at night. 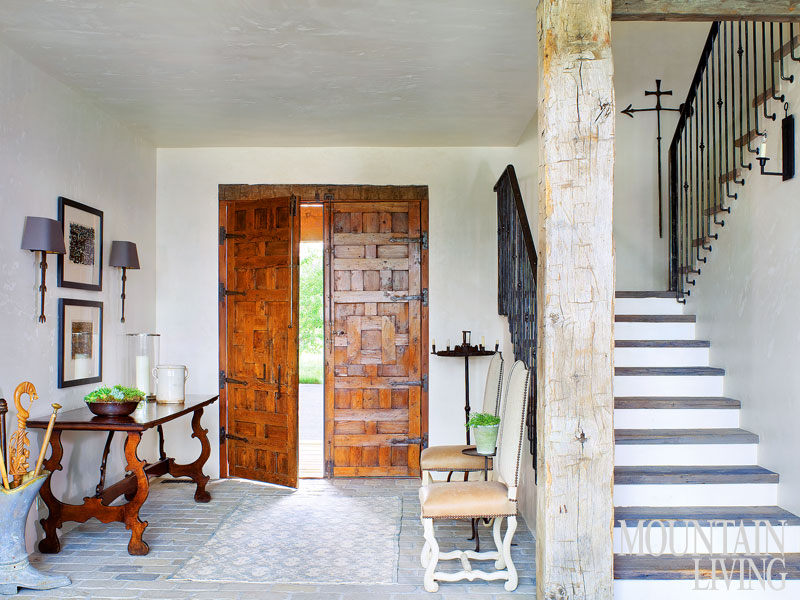 Spradling bought the home's handsome 18th-century Spanish doors for a client's home in Telluride, but the Spanish government took so long to release them that they arrived too late for the project. The delay was a boon for Spradling's home: The Pyrenese-pine-and-walnut doors open elegantly to the home's entry, where an 18th-century Italian walnut table stands atop cobblestones reclaimed from Chicago streets. 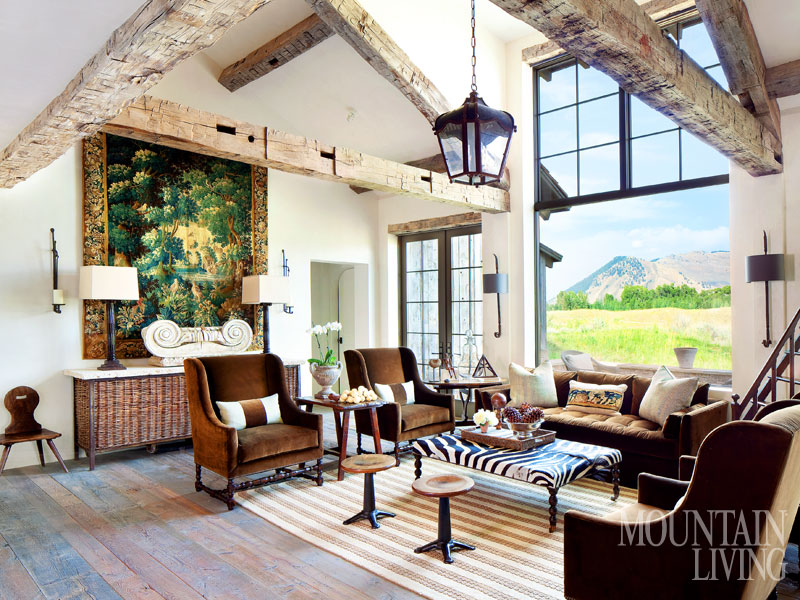 "The views are our art," Spradling says of the great room; she balanced the vista by hanging an 18th-century Aubusson tapestry in complementary colors on the wall. Below it, a console made of early-20th-century wicker-and-iron laundry baskets is topped with a piece of plaster ornamentation that once adorned a Chicago building.