A Guesthouse Mistaken for an Anasazi Ruin

Narcis Tudor doesn’t mind when his architecture is overlooked. For him, it’s confirmation that he’s done his job well. So when a deliveryman mistook his recent project outside Durango, Colorado, for an ancient Anasazi ruin, it seemed the highest compliment.

When the architect first met with Texans Joe and Robin Cunningham to discuss building a guesthouse on their Colorado property, the talk was of an adobe-style home in keeping with the high-desert setting. Together, they explored the rocky site on foot, considering the appropriate placement for a secondary structure. 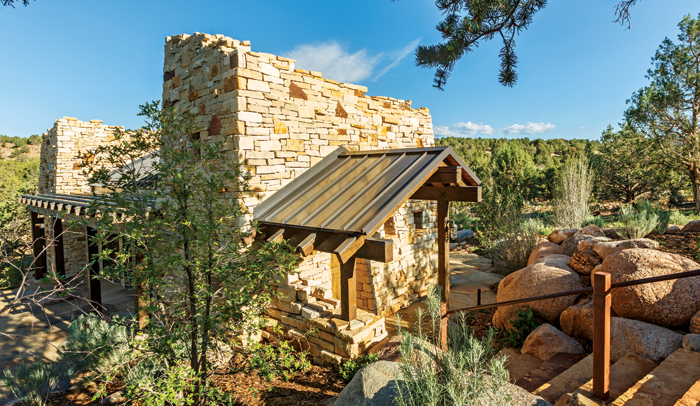 Beyond the narrow passageway, the guesthouse “embraces you,” Tudor says. “It’s a bit of an emotional approach.”

Not long after one last walk of the land—40 acres of juniper, piñon and scrub-oak-dotted hills overlooking the cottonwood-lined Animas River—Tudor was struck by a vision. “I was riding my motorcycle through the Southwest’s Four Corners region,” he recalls. “I was stopped, looking out over the landscape [and thinking about the project]. As soon as I got back to Telluride, I started to draw.”

What he drew was not an adobe structure but a building that takes its cues from the homes of the Ancestral Pueblo people, also known as the Anasazi, whose dwellings still stand in Mesa Verde National Park 100 miles to the west. Built between 600 and 1300 A.D. beneath overhanging sandstone cliffs, the 600 surviving structures are timeless, elemental and literally at one with the landscape.

Tudor envisioned a house defined by terraced walls that would seem to emerge naturally from the site.

Twin towers built of stone would function like bookends, with the rest of the house tucked out of sight in the space between them. “The idea was to allow the natural part of the house to stand for itself, and to let the more linear, man-made aspect take a subordinate role to the organic stone stacks,” Tudor explains.

The recently completed 1,100-square-foot building (with an additional 2,700 square feet of terraces) blends seamlessly into a hillside below the main residence. Barely visible from the end of the driveway, it is distinguished by its two stone stacks, with irregular, asymmetric rooflines that give the illusion of crumbling ruins. Like the dwellings of the Ancestral Puebloans, each is punctuated by narrow windows, with small, deep-set square apertures above. 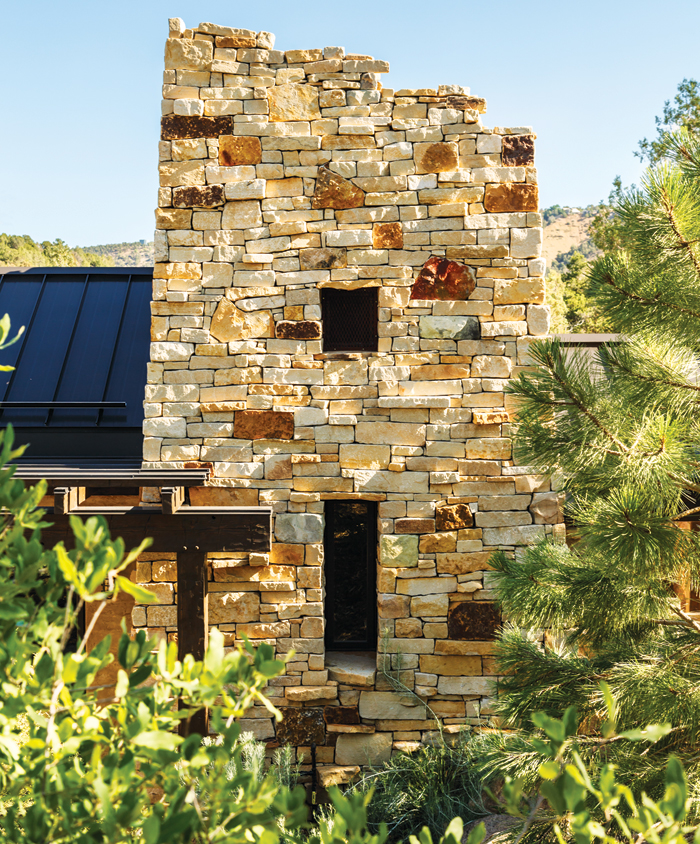 Irregular rooflines give the home’s twin stone stacks the look of crumbling ruins.

The glass-and-timber structure between the stone towers provides communal living space. Tucked out of view but commanding a sweeping perspective over the landscape, it has a minimalist-modernist aesthetic that complements the setting without competing with it. At the far end of the house, below the second stone stack, are a bedroom, study, bathroom and sauna.

The approach to the house is a process of discovery, intentionally obscured by naturalistic plantings and large stones. “We wanted to create a feeling of expectation as you descend between the boulders,” Tudor explains. 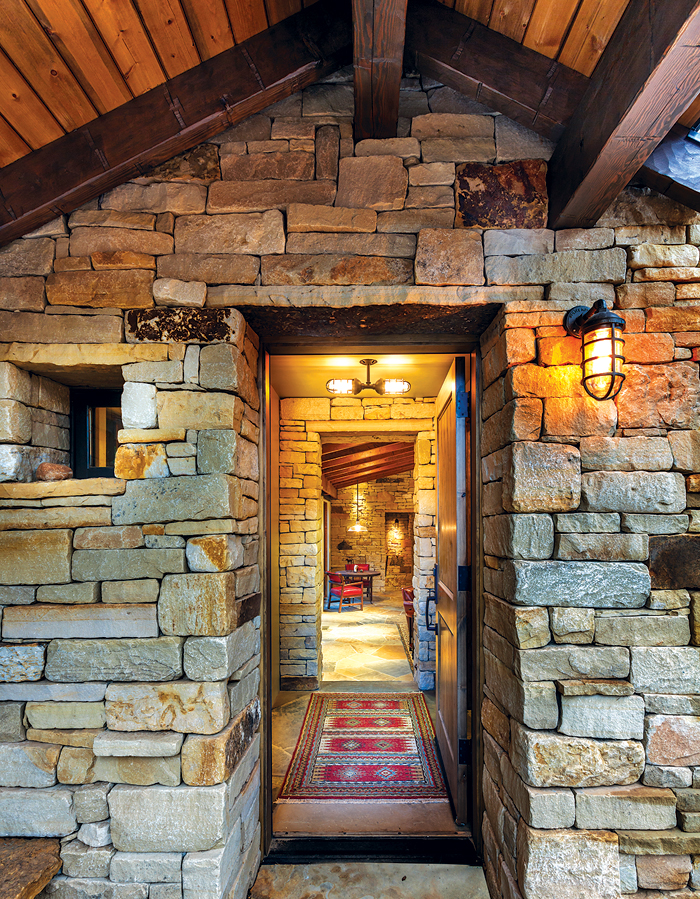 The entry, with its heavy timbers and stone walls, “was designed to be very constrained,” Tudor says. “It almost closes in on you, and you feel as though you’re going through a keyhole.” The open expanse of the living room beyond provides a dramatic contrast and sense of revelation. Positioned to capture sunlight and views, its broad glass walls “accentuate the characteristics of the site,” Tudor says.

These walls, which open onto expansive terraces, create a literal connection to the outdoors. Just outside the living room, a half-round kiva-like fire pit with built-in seating invites conversations around the fire and the enjoyment of southern Colorado’s crystal-clear night skies. 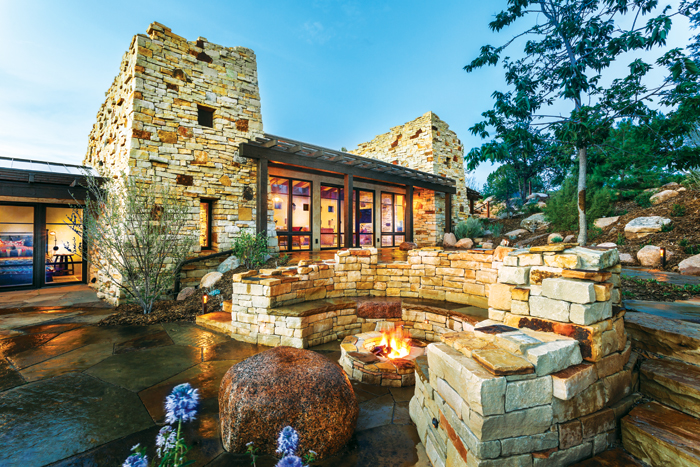 “My goal is to not put anything I design on a pedestal,” Tudor says of his design. “It is supposed to be subtle, to go unnoticed. My architecture is secondary to the context. I live in the most beautiful place in the world, and my role is to enhance it.”

TIMELESS SUSTAINABILITY
It was important to homeowners Joe and Robin Cunningham that sustainable principles be fundamental to the conception and execution of their new guesthouse—not just out of respect for the environment in general but also because of the pristine nature of the site and its proximity to the Animas River: 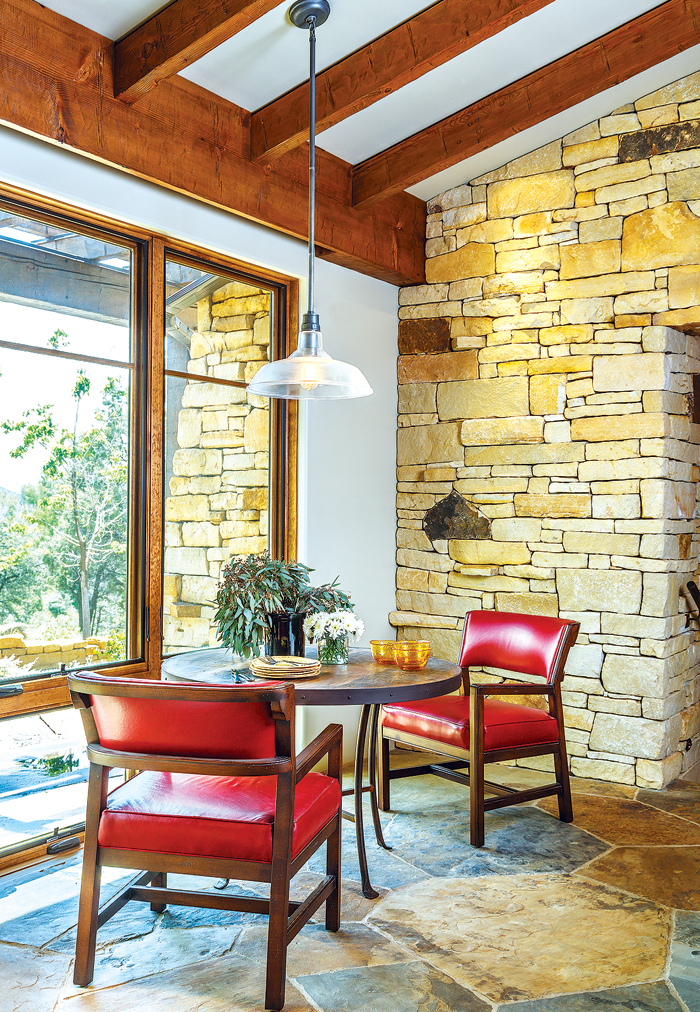 The living, dining and kitchen areas share the same open space; sliding-glass doors allow the living and dining areas to expand out onto the adjacent terrace. 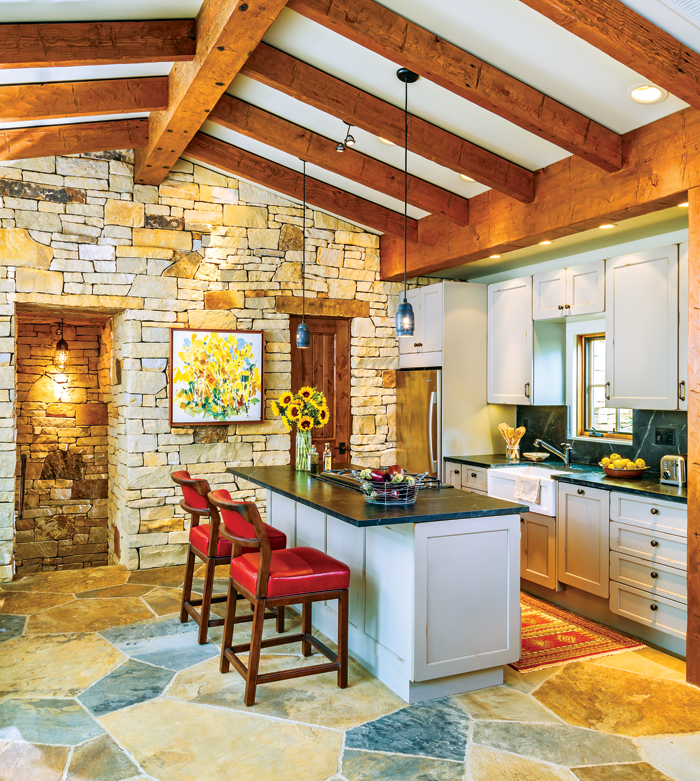 The kitchen has a European country farmhouse feel by design; the intention was to create an informal and welcoming atmosphere. Its heavy ceiling timbers are aligned with the outdoor trellis, and the stone floors extend outside too, creating a seamless transition between interior and exterior living spaces. 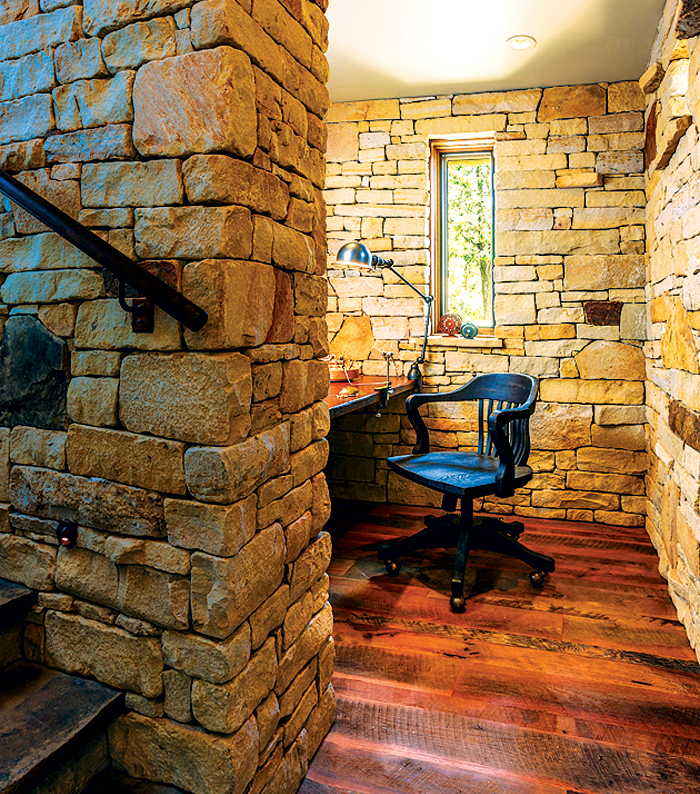 A cozy study is situated beyond the kitchen and down a set of stairs. 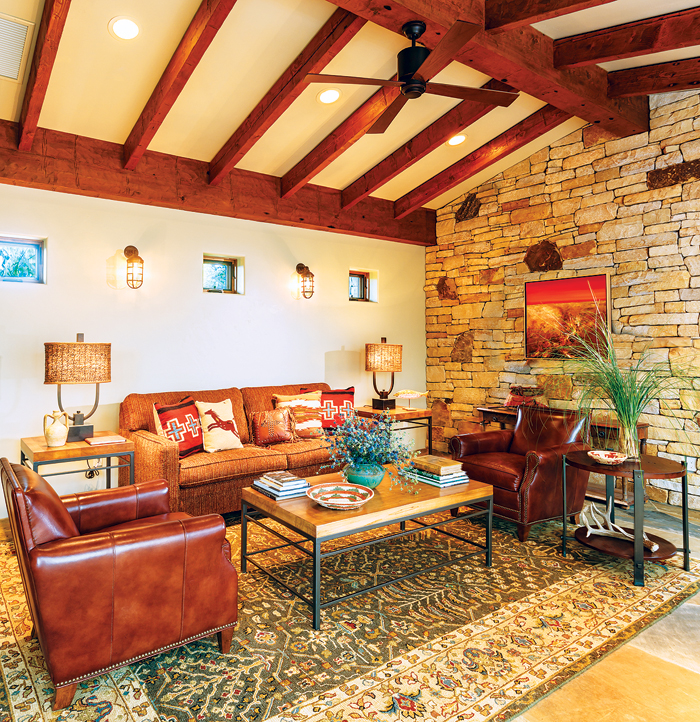 The living area’s sofa faces a wall of glass and the landscape beyond. 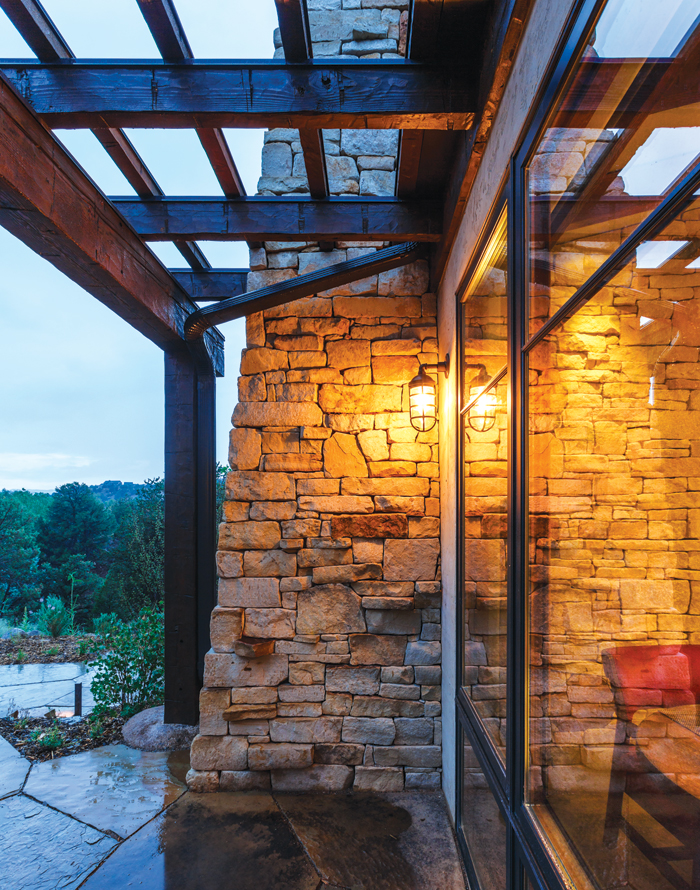 An adjoining terrace adds to the bedroom’s living space; the trellis provides welcome shade during the hot summer months. 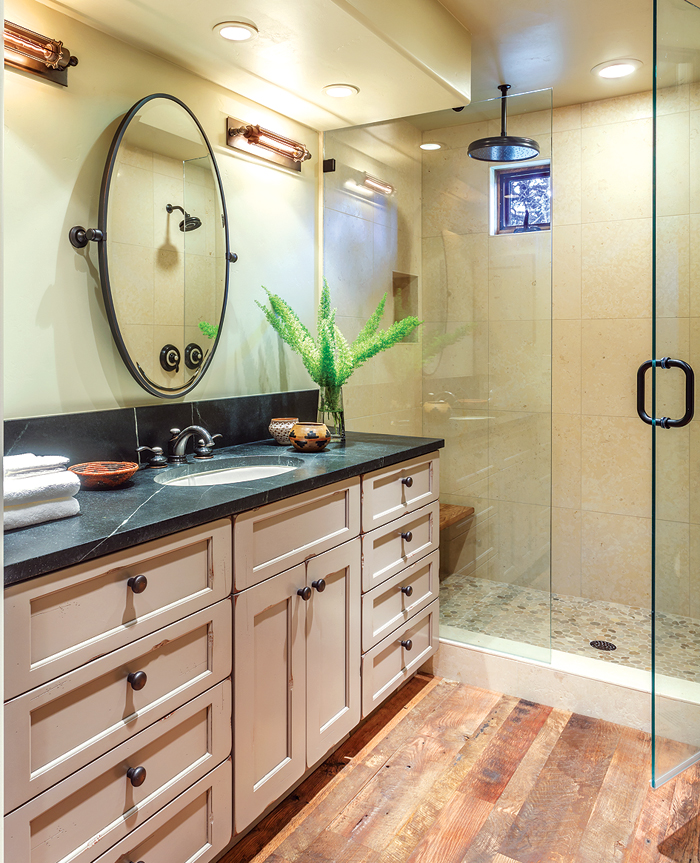 A small square window in the bathroom echoes those seen in Ancestral Puebloan dwellings—a reminder of the home’s architectural ancestors.

The Secrets of Architectural Rendering

Driven by Awe and Respect for Nature