A Family Lodge in Bozeman With Bohemian Style 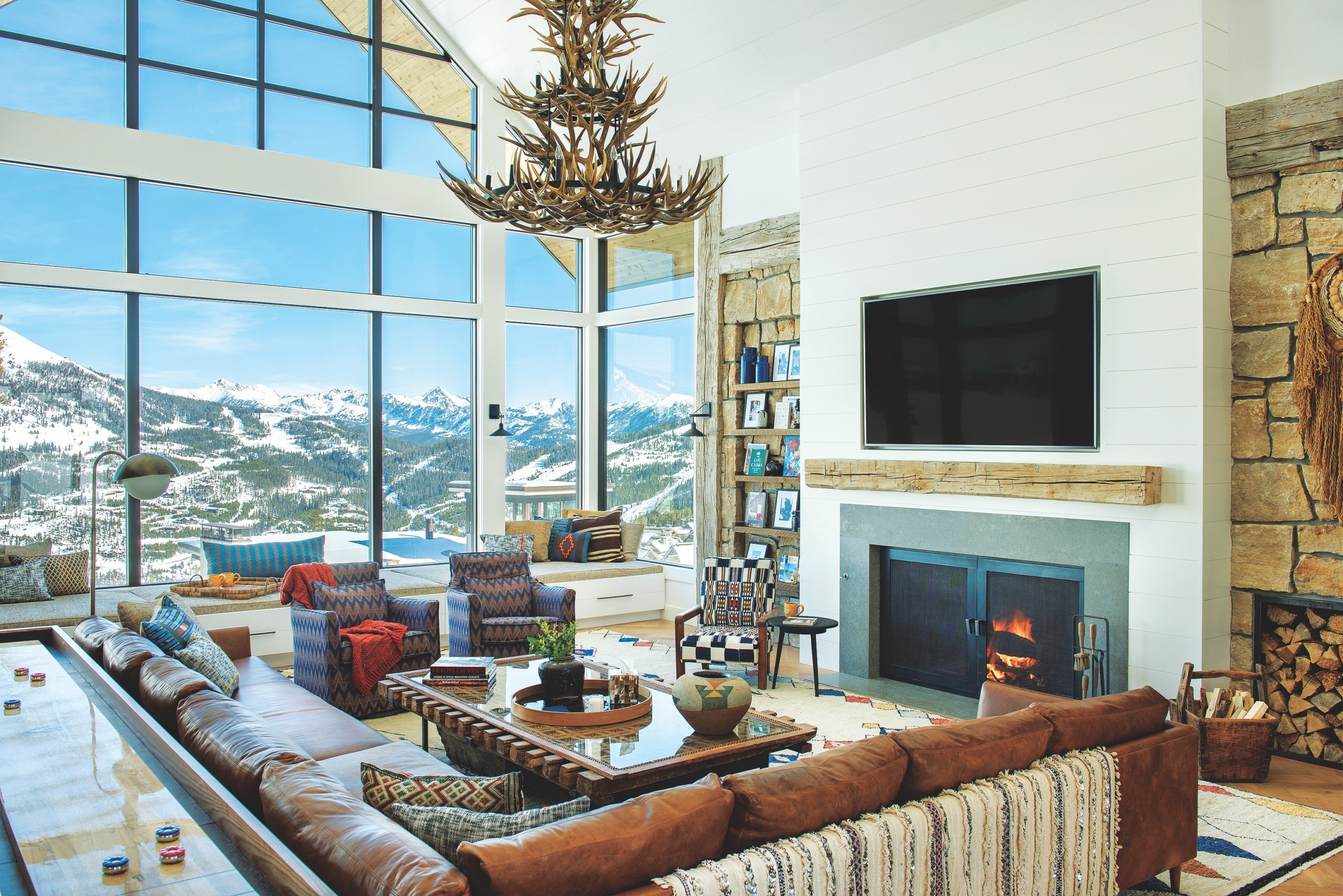 Atop the soaring hills of Montana’s Yellowstone Club sits Mountain Mama. Though the name of this mighty abode may evoke images of country roads vis-a-vis songwriter John Denver, owner of Cashmere Interior and principal designer Charlene Petersen selected it to describe the house’s eclectic feeling. “I wanted a name that fit—something a little bit bohemian, a little bit hippie,” she laughs. But she also wanted to design a mountain house that could become a functional vacation home for a family.

The faded navy batik print of the Robert Allen drapery in the home’s dining room provides a natural feel and allows the live-edge walnut tabletop to take pride of place.

“The house had to be functional and livable, a place you could put your feet up in,” she says. Much of the home was designed around family dynamics. The large bar includes a nearby play area “so the adults could still have an eyeball on the kids,” says Petersen, who herself was raising two young children while designing the house. “The design team was super sensitive to the functional needs of a family.” 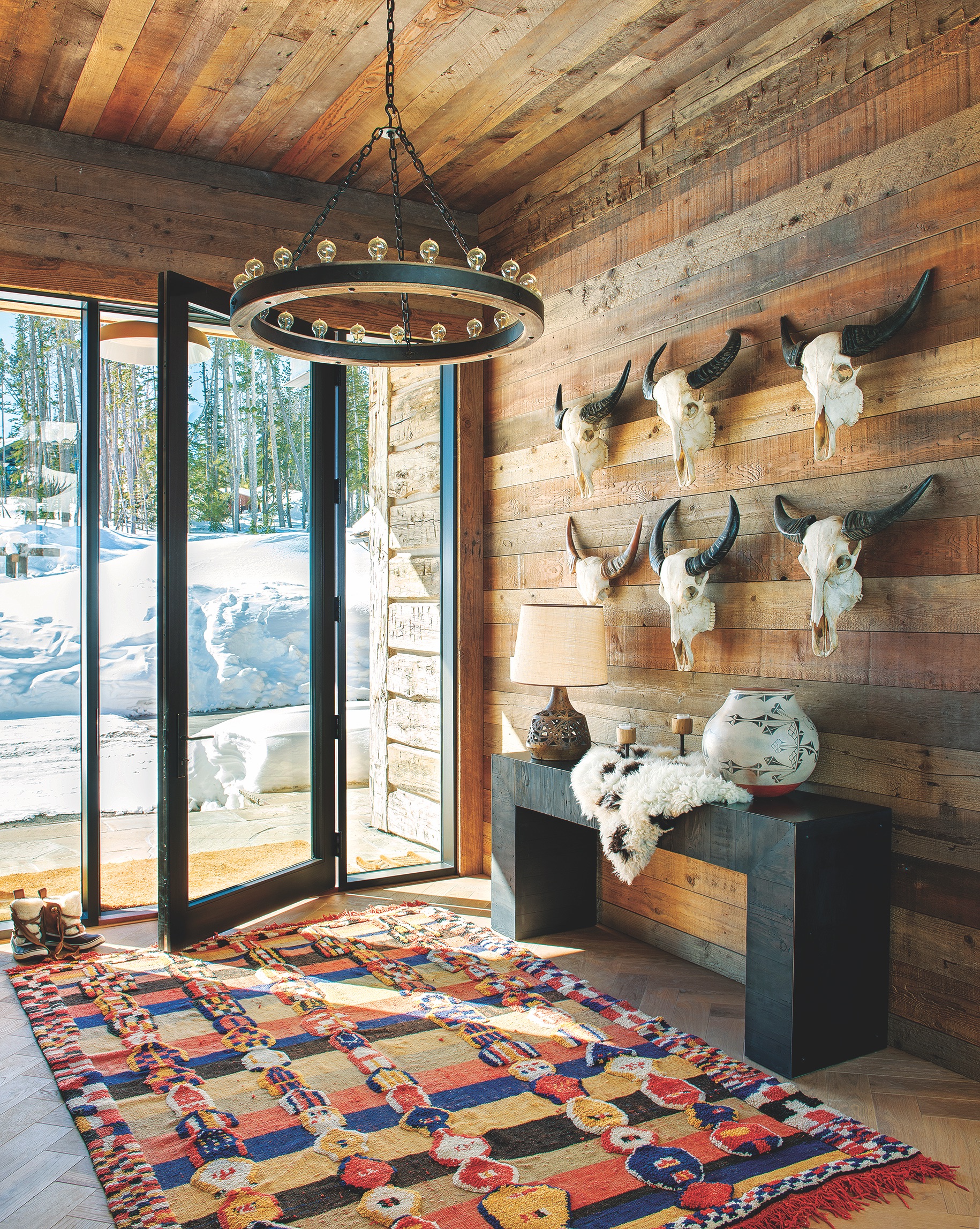 While practical, Mountain Mama has other hidden charms. The home’s exterior belies the whimsical patterns and lively hues found within. “We weren’t afraid of using color,” Petersen says of the brilliant blues, cognac-leather browns and mustard yellows that weave their own thematic threads throughout the house. 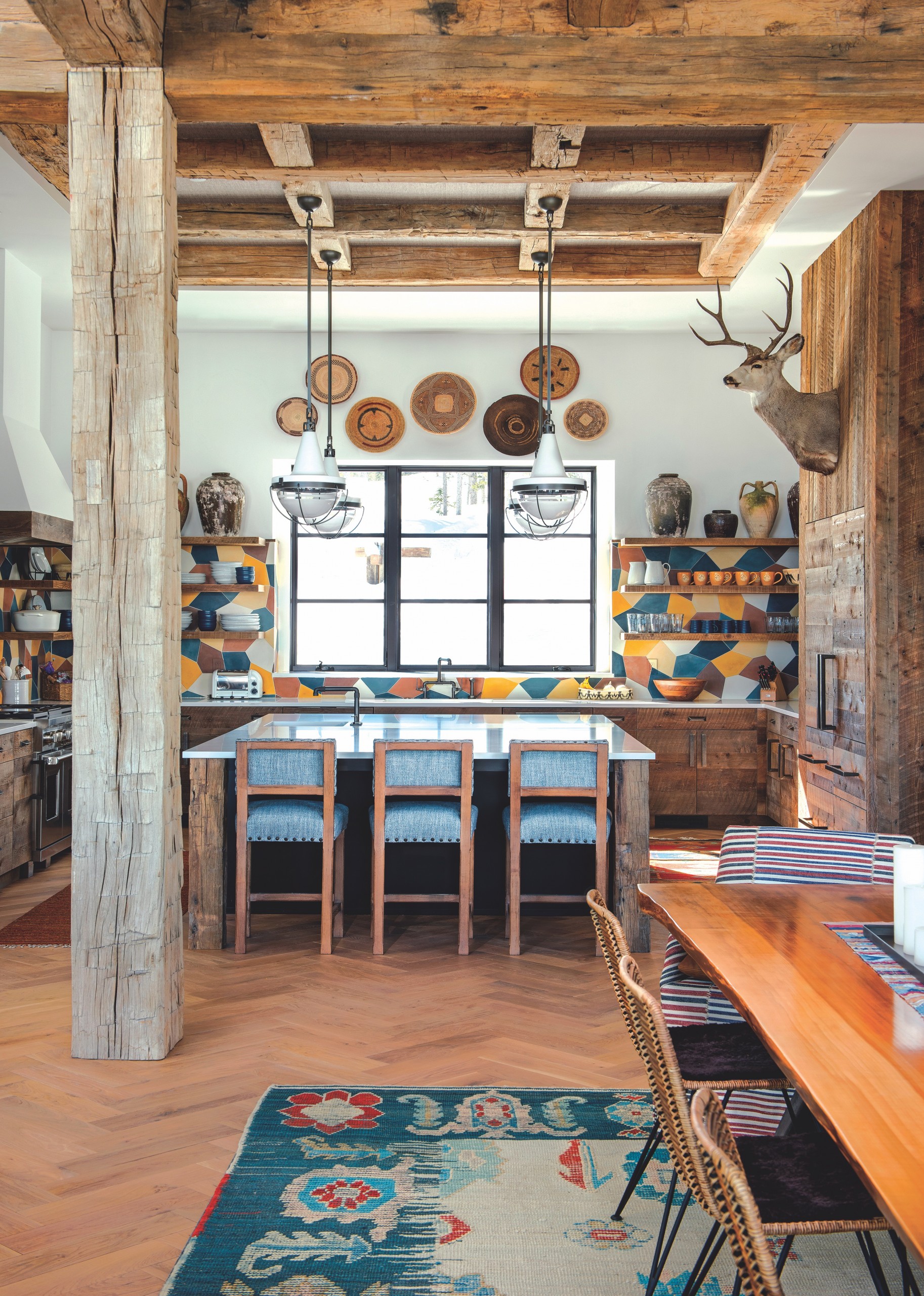 The colorful and whimsical kitchen backsplash was a risk that paid off, Petersen explains. The colors connect to the other rooms’ celebration of saffron, blue and white while providing a counterpoint to the reclaimed wood columns.

The abode was the third of three homes she had designed for Yellowstone Club. “The first house had a dark and moody approach, and the second was light and airy,” she recalls. By the time she began planning the third house, “I wondered, ‘what if we just make a white house with pops of color and marry that against a fresh background?’” 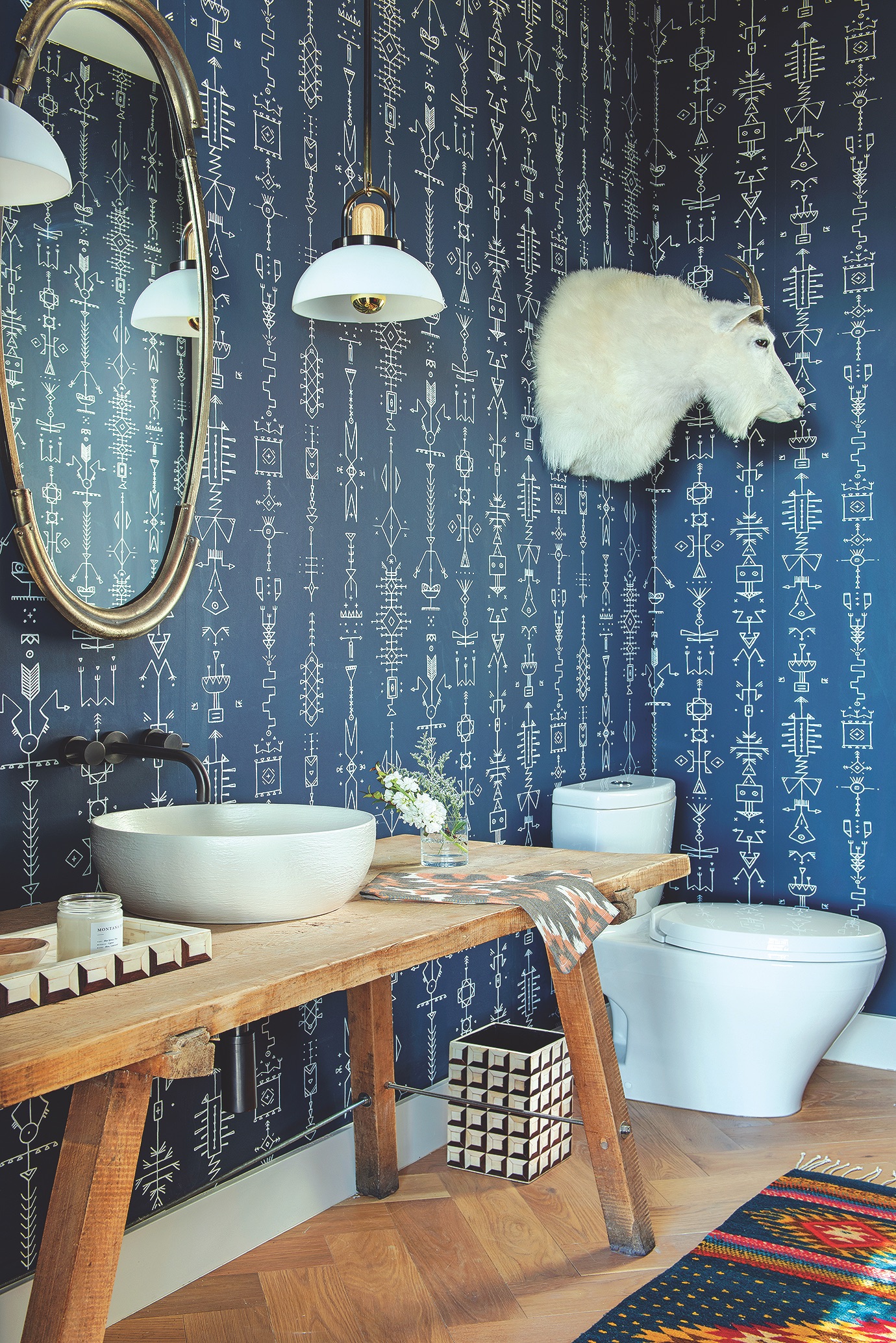 The home’s principal powder room is adorned in wallpaper evoking tribal patterns and effortlessly augments the diversity of the small room’s décor without overpowering it.

“Charlene is never afraid to try something new,” says project architect Steve Gordon of Locati Architects, who worked with Petersen on Mountain Mama. “The home has a lot of clean lines and is more on the contemporary side but still has a lot of classic elements.” 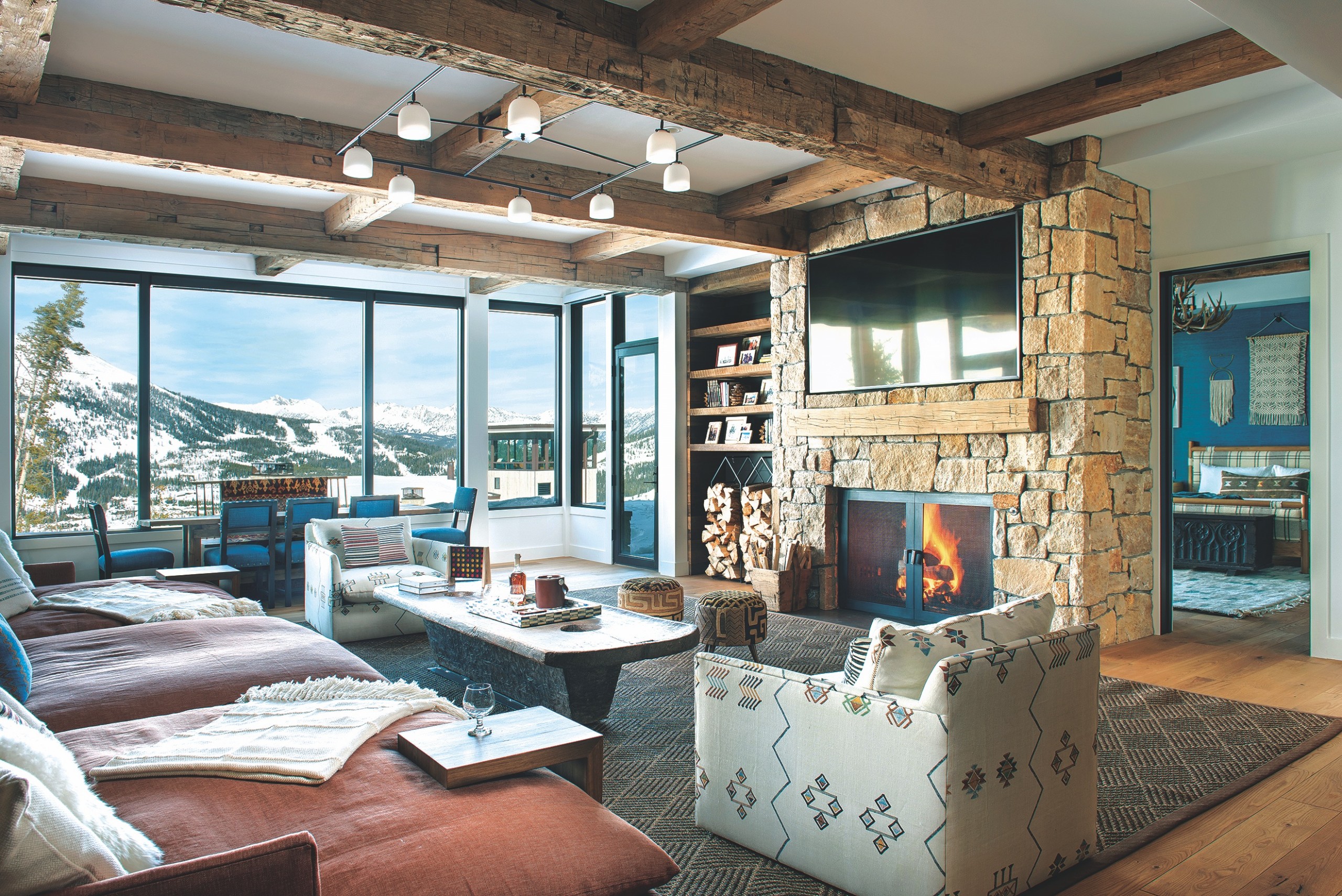 Mountain Mama is a home full of surprises. The couch in what Petersen calls “the everything room” is made to a significant depth, giving anyone who sits there the best seat in the house.

The result is a classic lodge or ski chalet brimming with bohemian vibes. “I wanted color and a fresh take,” Petersen says, “but I didn’t want to totally depart from classic feelings of living in the mountains.” The home’s crisp white walls serve as backdrops for the play of colors and the designer’s profusion of textiles. Meanwhile, the wood accents and reclaimed timber tethers everything to the richness of Montana’s natural beauty. 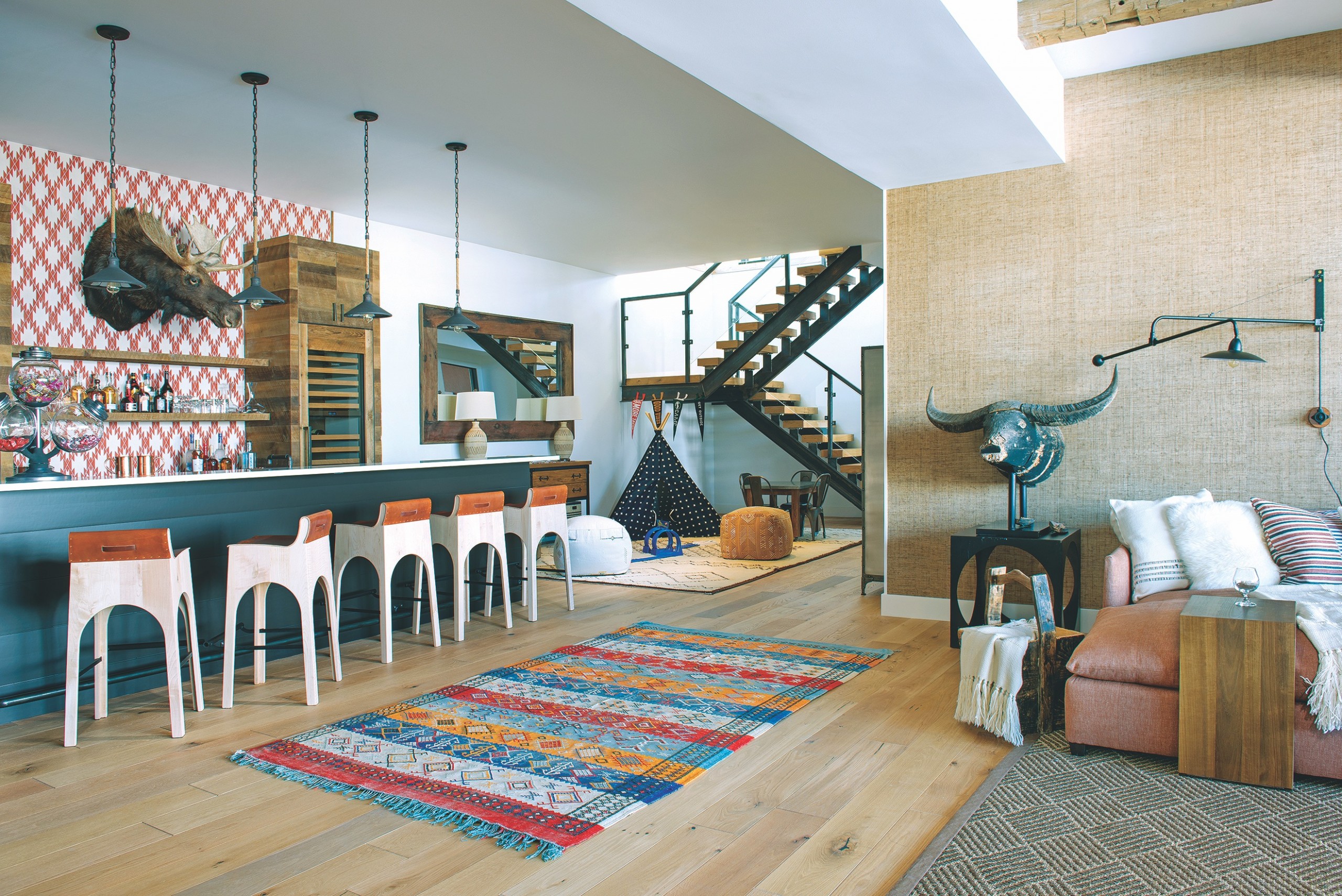 While the moose head above the bar is real, the water buffalo on the adjacent wall is not—only its horns are.

In fact, many of the wooden pieces—including the kitchen cabinets—are made from reclaimed barn board. The material, Petersen explains, has a rich color that is both soft and warm with a natural patina. “I wanted the home to feel warm and inviting by bringing the outdoors in with the reclaimed barnwood and immense windows.” The living room’s wall of windows illuminates the space in natural light, creating a glowing thread stretching back to the entry that is designed to welcome in nature as chief houseguest. 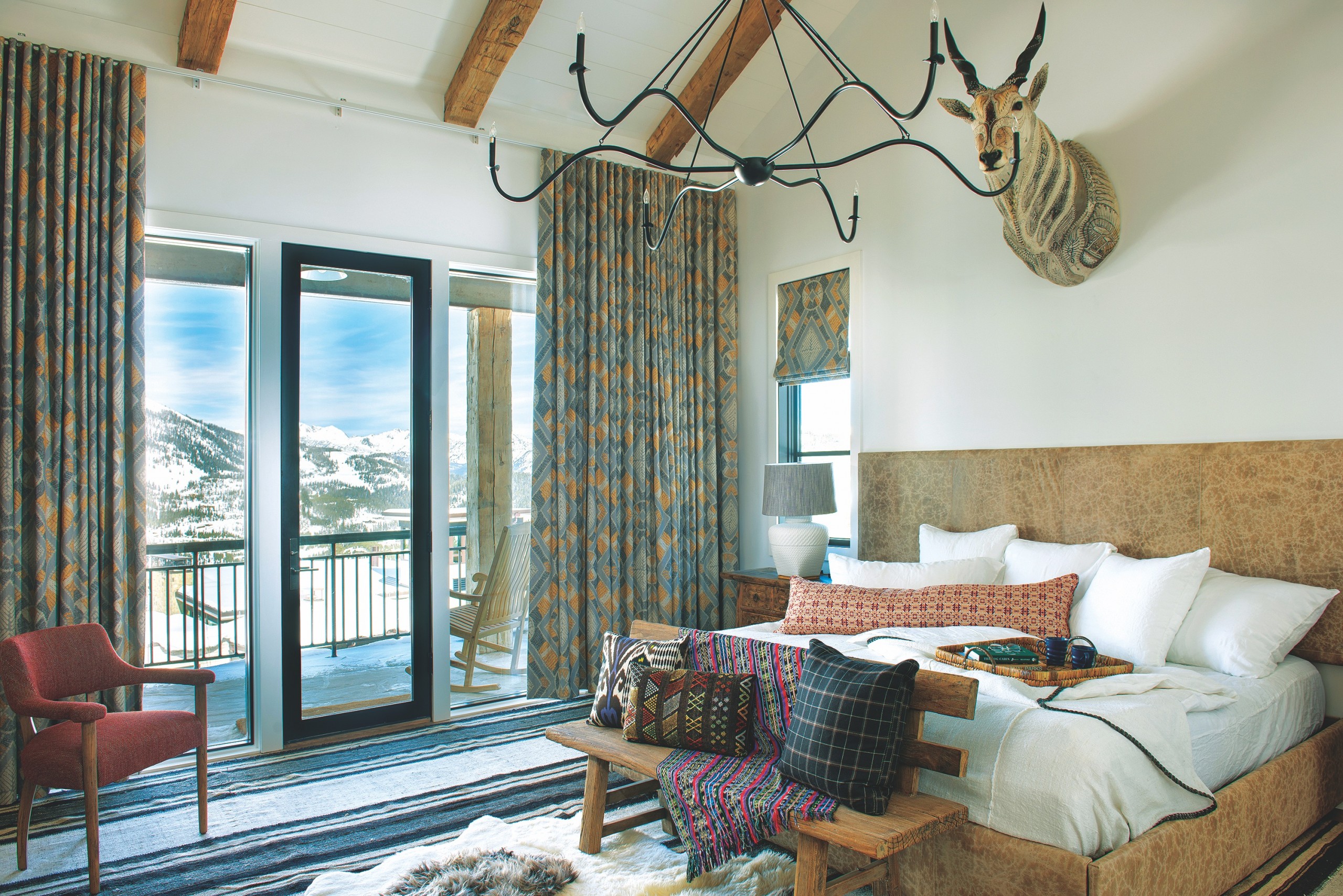 Petersen wanted the master bedroom muted in comparison to the rest of the décor. White hues in the vintage bedding linens from Matteo and the coverlet by Caravane create a “chill factor,” she says.

The master bathroom likewise champions a unique juxtaposition of meticulous design with natural splendor. A modern version of a clawfoot tub is surrounded by windows, giving whoever’s relaxing in a warm bath (the vacationing parent, perhaps?) beautiful snowy views in winter. Meanwhile, the older kids’ room uses Native American motifs, complete with a bookshelf up-cycled from a canoe and a bathroom with moose-and-bird wallpaper. 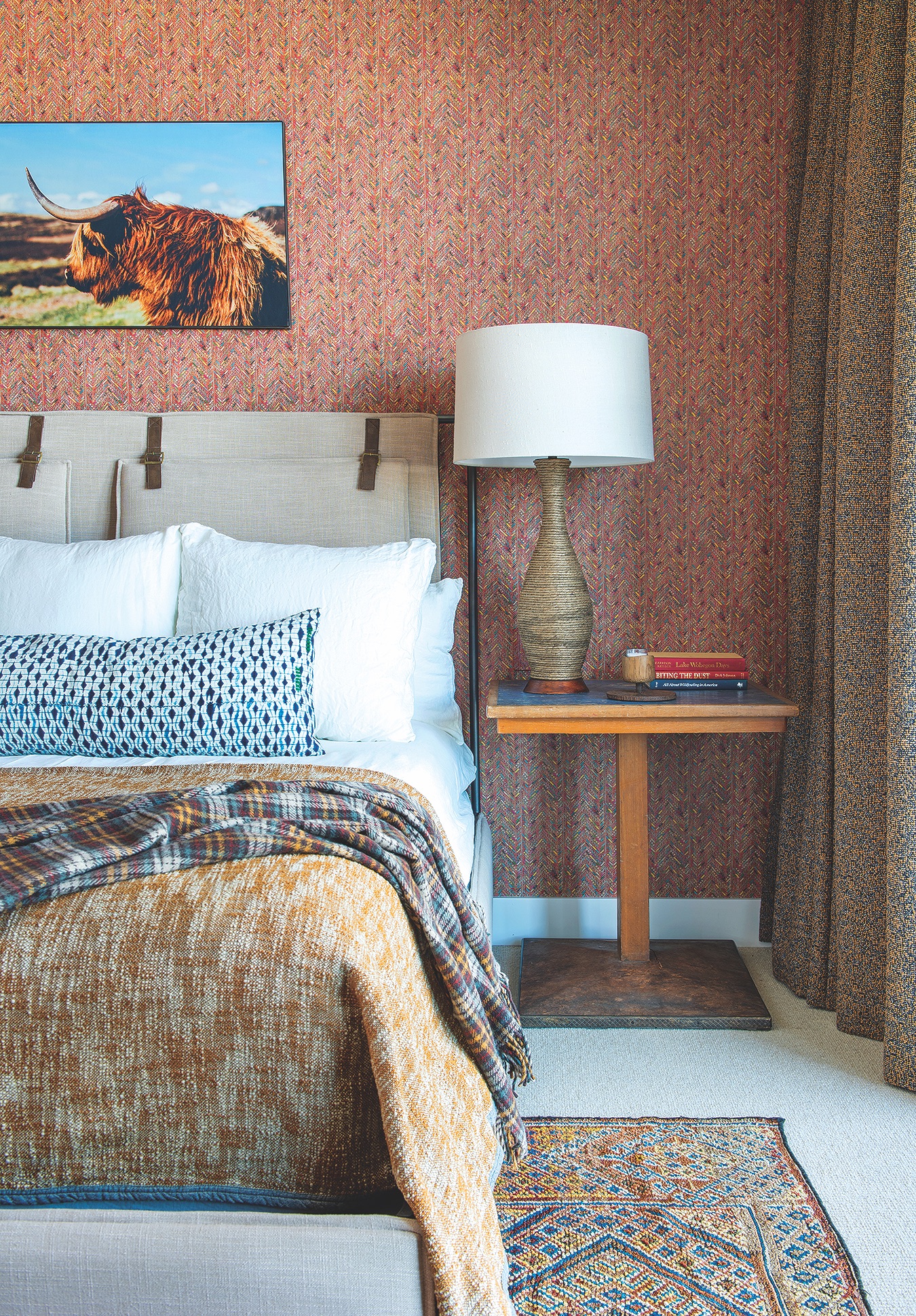 The warm tones in the bedroom’s wallpaper and bedding mimic hues found throughout the home.

For Petersen, a self-described avid textile collector, it was important to contrast her playful pieces with the serenity that accompanies lodge life. “Nature is spectacular on the mountain, and I wanted to mix everything together in a really fresh way,” she says. “There are threads of taxidermy throughout the house to give a quirky feel.” 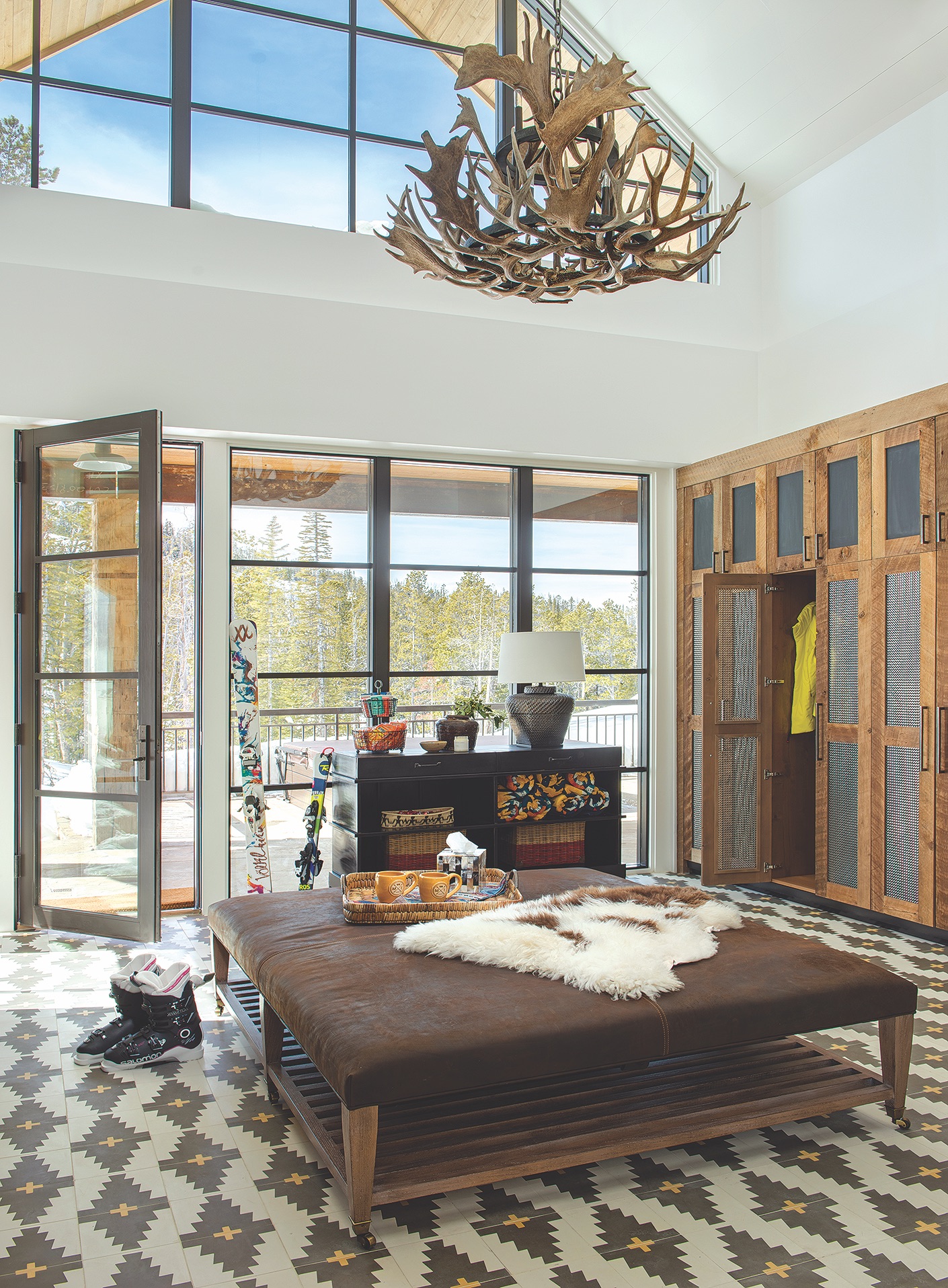 The mudroom doubles as a ski room and was designed to get guests ready for mountain adventures. The chandelier, composed of moose antlers, hangs above an oversized leather ottoman where the family can sit while putting on skis.

Of course, certain rooms encourage an escape outside too. The mud/ski room was designed to entice the family to “jump on the mountain,” Petersen says. The vacationing family members might sit on the oversized leather ottoman to put on their skis as sunlight beams onto the floor’s hand-painted chocolate brown and saffron yellow concrete tiles. “The house is full of no-fuss luxury and positive energy,” she says. “I wanted the owners to feel like they were sitting in luxury, but that it was also comfortable.”

A Carriage House Transformed into a Cozy Retreat