A Custom Home in Jackson With Roots in the Past

When she lived in Chicago’s urban Lincoln Park neighborhood, Randy DePree flew out West to snow ski, hike and fly-fish several times a year. With its stunning mountain views and many outdoor recreational activities, Jackson Hole was one of her favorite spots. “It finally dawned on me that I should move out here,” DePree says. 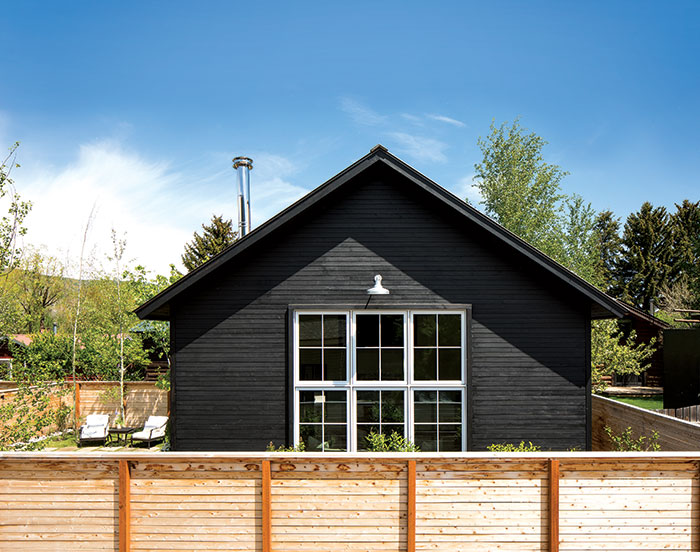 A simple gabled structure with black-stained cedar siding juxtaposed by white windows and a metal roof gives Randy DePree’s home roots in the past but with modern details.

In 2014 she did just that. Less than a year later, she bought a spacious early-20th-century log cabin on a nearly quarter-acre property not far from downtown. Already accustomed to a smallish city apartment, she decided to rent out the main house and build a new one-bedroom guest home for herself and her dog, Bugsy, on the back of the property. 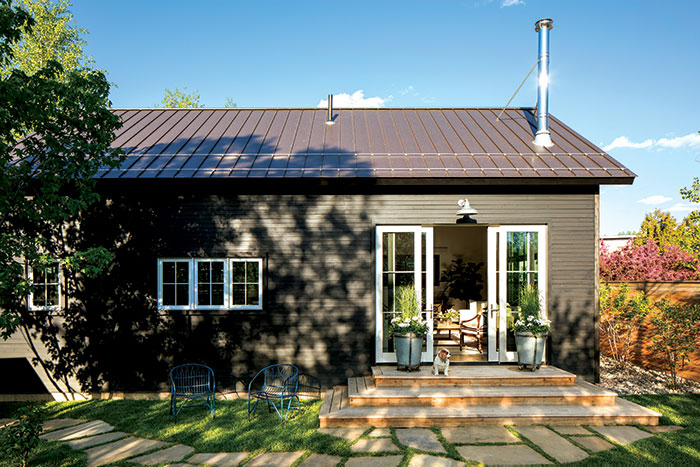 Randy’s King Charles Cavalier, Bugsy, surveys the backyard from his perch atop the tiered wooden deck off of the living room.

Surrounded by a cedar fence that keeps wandering moose out, the result is a simple gabled structure with black-stained cedar siding juxtaposed by white windows and a metal roof. “It has roots in the past, but the details are modern,” says architect Adam Janak. 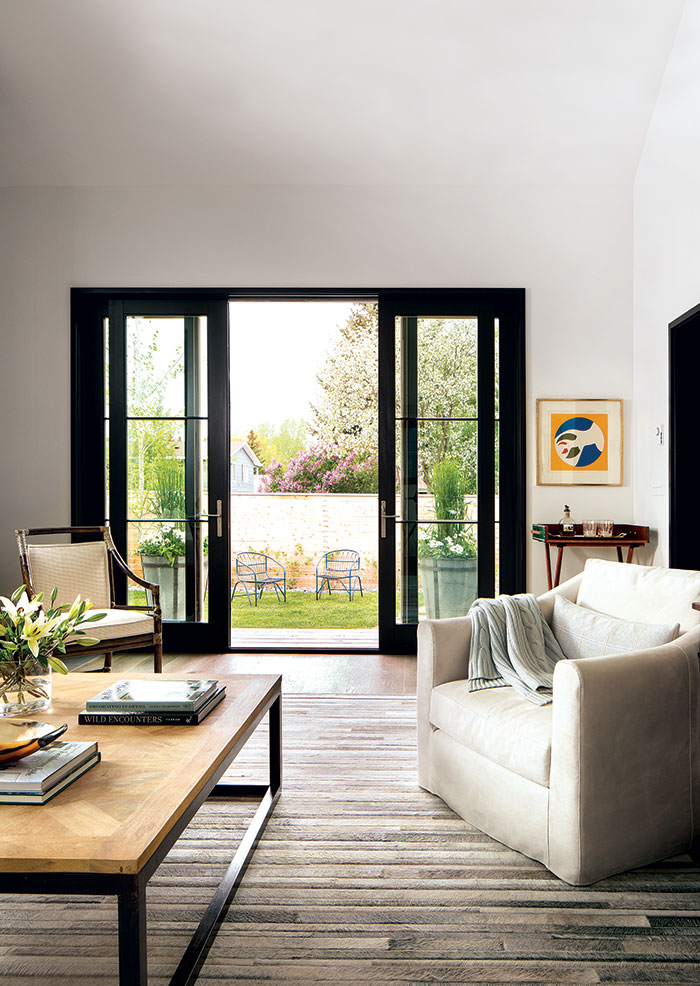 When the doors are open, the living room and exterior function as one space—ideal for informal gatherings. Underneath colorful artwork, a wooden tray serves as a bar.

The color scheme has been reversed inside, where black-painted windows contrast with crisp white walls and painted built-in cabinetry. Located in the home’s only corridor, for example, the kitchen sports white Shaker-style cabinetry and black countertops. “It fades into the background,” Janak says. 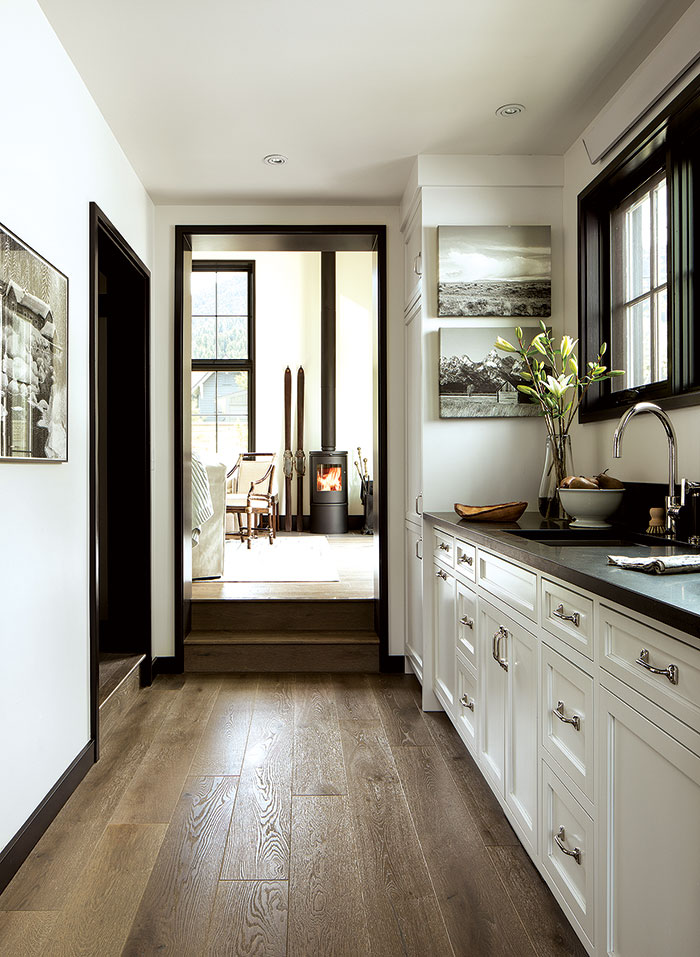 The kitchen is tucked into a corridor leading from the entrance to the living room.

Across from the kitchen, a metal spiral staircase with wood treads leads to a lofty sleeping area located above the first-floor bedroom. Open to the living room below, the space feels bright and airy. “When you’re working with a compact footprint, you have to get creative,” Janak explains. 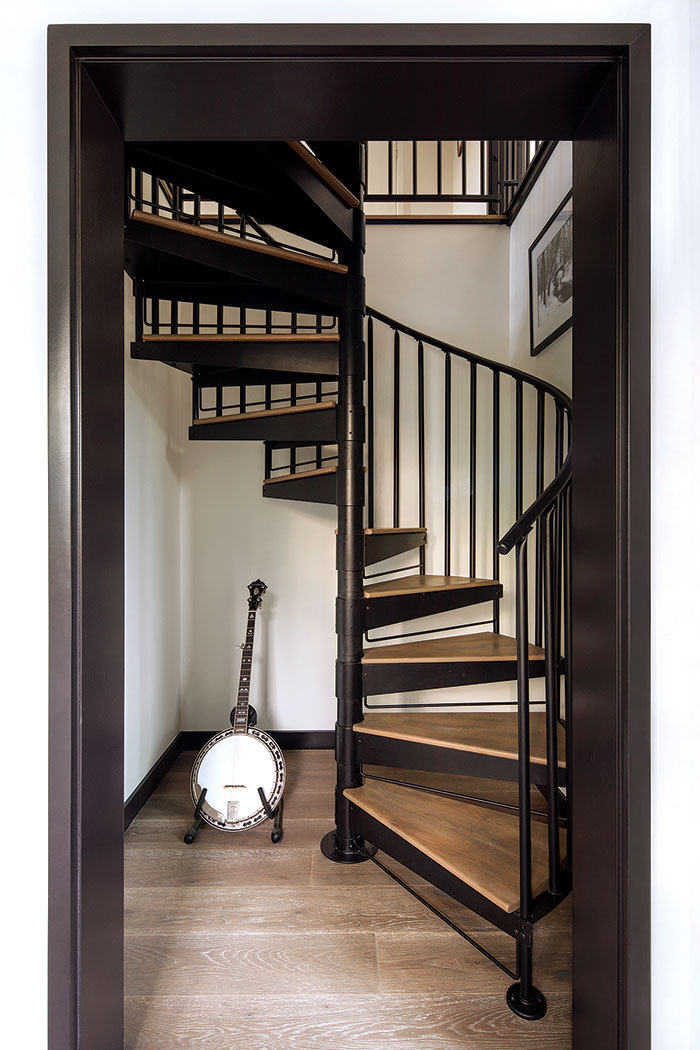 Built from a kit, the metal spiral staircase with wooden treads leads to a loft over the first-floor bedroom.

He points to the two stairs that lead from the kitchen to the living area, which has a high peaked ceiling and a large window that frames south-facing views of Snow King Mountain. “We added steps to create privacy from the alley and create a stronger mountain view,” Janak says, noting that the steps themselves make the space feel larger. 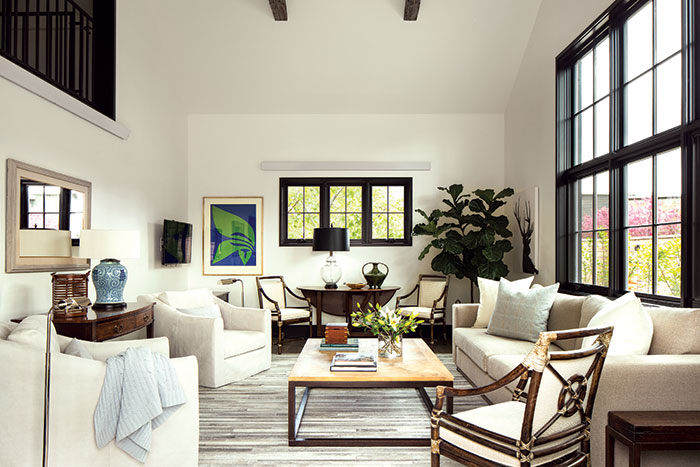 Accented by treasured antiques, a pair of linen-covered chairs and a contemporary clean-lined sofa surround a modern metal-and-wood cocktail table in the living room.

Interior designer Rush Jenkins, of WRJ Design, likewise embraced the simple color palette. In the living room, he introduced a clean-lined white sofa and slipcovered chairs atop a large gray-and-white-striped cowhide rug that pays homage to the West in a modern way. “There’s a graphic quality to the architecture, and we wanted to bring that same quality to the furnishings,” Jenkins says. 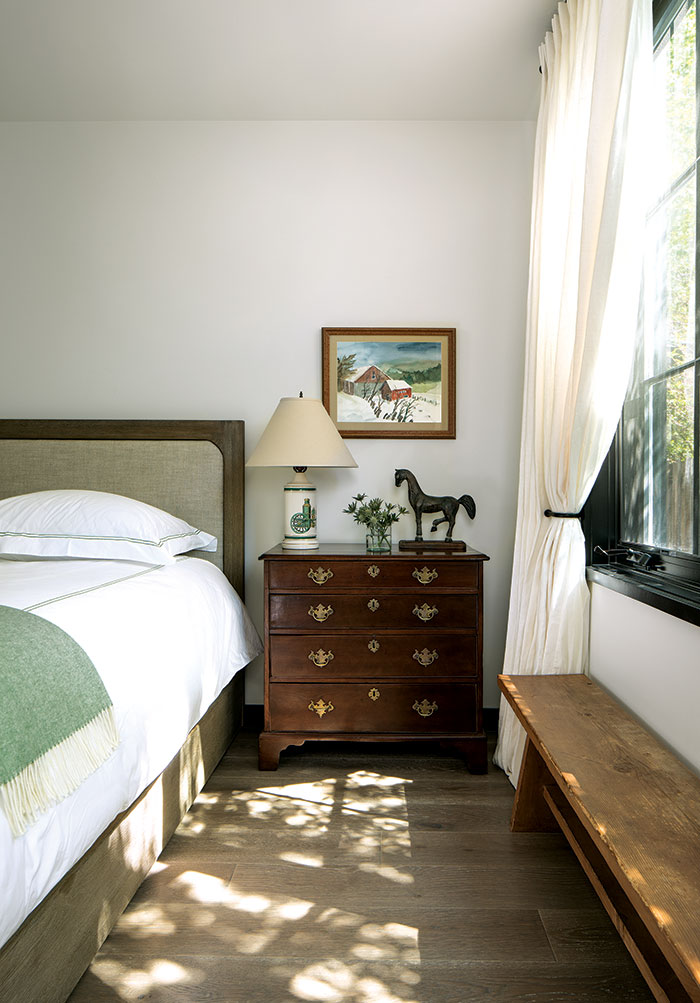 An antique side table with clean lines coexists peacefully with the modern upholstered headboard in the master bedroom.

Although new, the plush furnishings work perfectly with DePree’s existing pieces, which include an antique console, a drop-leaf table and her grandfather’s snow skis, which are propped up against the wall next to a sleek wood-burning stove. 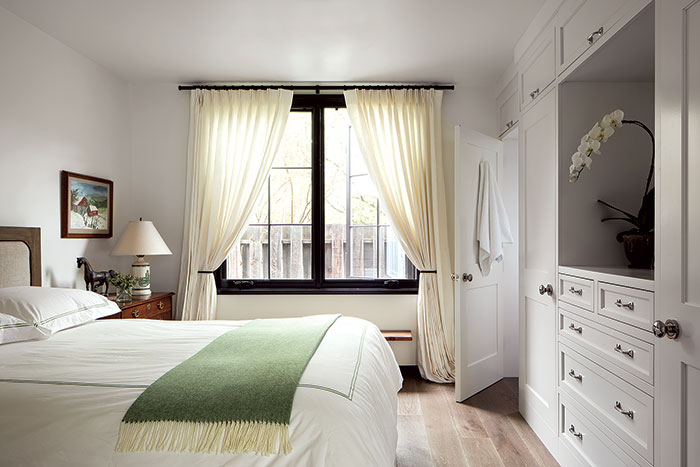 When closed, the door to the bathroom seems to disappear into the built-in cabinetry in the master bedroom.

The same formula applies to the bedroom, where a streamlined upholstered headboard with a wooden frame pairs effortlessly with an antique English chest. A celadon wool cashmere blanket at the end of the bed likewise ties in with the bedside lamp and, alongside it, a small watercolor that DePree’s great-grandmother painted.

“Randy brought a lot of her own pieces and antiques, which we love clients to do, because there’s meaning there and sentiment,” Jenkins says.

A wall of simple white cabinetry provides ample storage and frames the entrance to the only bathroom. When closed, the door appears to be part of the millwork. Simple linen draperies soften the space and filter the morning light. 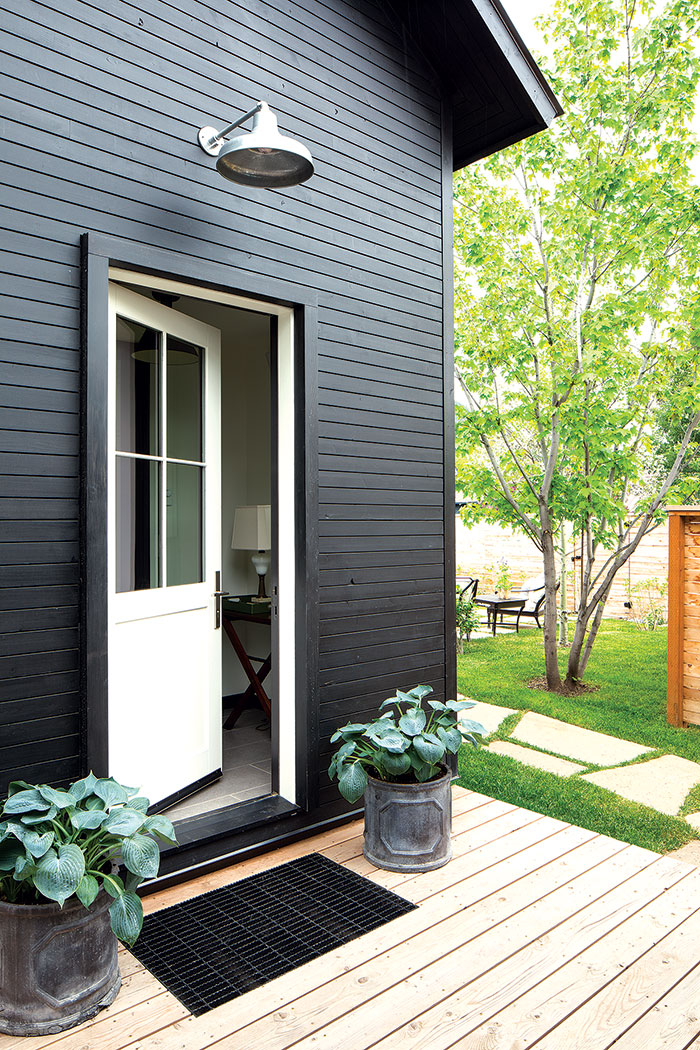 A consummate entertainer, DePree has held quite a few memorable soirees in her compact home. One of her very favorites is a flower-filled garden party every spring. Dressed in colorful outfits, up to 30 people move between the living room and the spacious yard, where rustling aspen trees and fragrant lilacs add to the ambience.

“It goes until it’s dark,” DePree says, noting that thanks to the welcoming community, she has had no trouble meeting new friends with shared interests to invite. “It’s been a smooth transition.”

Accustomed to small city apartments, Randy DePree didn’t need a big house, so she hired Northworks Architects + Planners to build her a new structure on the back of her lot. “Small is the new green,” DePree says. But despite its small size, the gabled dwelling feels open and spacious.

MAKE EVERY SPACE COUNT While DePree at first wanted the kitchen in the living area, architect Adam Janak convinced her to place it in a hallway. “It fades into the background, more like built-in furniture than a cabinet tacked on the wall,” Janak says. INCORPORATE A MIX OF SMALL AND LARGE FURNISHINGS Small accent pieces, such as a champagne tray or an accent table, serve a purpose without taking up too much space. “You can fit a lot of things in a small space if it’s planned out well,” interior designer Rush Jenkins says. LET IN THE LIGHT The lofted great room is located on the south side of the house, creating a light-filled space that feels open and airy. “Even though it’s small, it feels big, and that has a lot to do with the design, the windows and the views,” DePree says. “This home is efficient, like a boat, without feeling cramped.”