A Connoisseur and Craftsman

His New Jersey workshop holds a million square feet of veneer from 150 different species and 200,000 board feet of lumber. He calls it Lignum Theatrum (Wood Theater) because “surrounded by nature’s spectacular works of art, you feel your humanity.” It is, indeed, like a theater or a cathedral, or an uber-private sales room in a Madison Avenue gallery. Well-heeled clients come to choose the wood that will become their distinctive dining table or to order several pieces of exceptional furniture for the great room of their mountain home.

He calls himself a Wood Hunter. Others refer to him as the Titan of Timber and the Wood Whisperer. No matter the moniker, Pollaro is a connoisseur of fine wood. He travels the world—much like a buyer of rare diamonds—tracking the finest woods with the most spectacular grains. “I buy only about half of one percent of what I see each year,” says Pollaro. He adds that he doesn’t buy endangered wood and does not support people who “are going after endangered species.”

His most recent find is a giant 600-year-old white oak (more than 10 feet in diameter in some places) under which, in May of 1780, George Washington met with the Marquis de Lafayette to discuss war strategies over a picnic lunch. The beloved tree died in 2017 and is being resurrected as a limited number of legacy tables. “As we were cutting the tree into live-edge slabs, we hit a musket ball from the Revolutionary War,” says Pollaro. 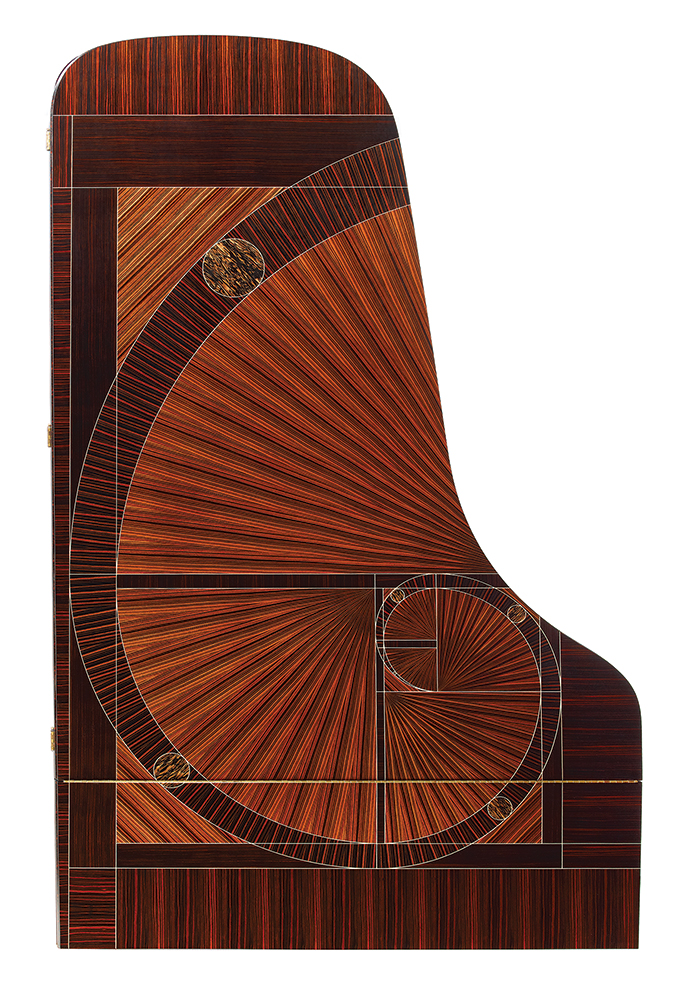 Pollaro was commissioned by Steinway & Sons to design and build its 600,000th grand piano.

Pollaro’s business started in 1988 in a 300-square-foot garage. The entire staff was two people—Pollaro and his best friend Jerry Marano, who “played guitar in a band at night and was looking for something to do during the day.” Marano still works there, but now the company, celebrating its 30th anniversary, employs 45 people and works out of a 60,000-square-foot space. “Those first years were hard,” Pollaro remembers. “But, we always did quality work.” One of those first pieces, a cabinet he made for a local couple, recently came back to be refinished. “And, oh yeah, I still love it,” he says.

No surprise. Each piece is made by a single craftsperson—using hand tools, vintage cast-iron woodworking machines and time-honored but labor-intensive techniques like complex veneers, inlays and egg-shell work. No computerized equipment. “I want each piece to bear the fingerprints of the craftsman,” says Pollaro.

“We only make 120 pieces a year,” he says. Most are custom orders from art connoisseurs like Larry Ellison and David Geffen and A-listers like Brad Pitt and Jeffrey Katzenberg. 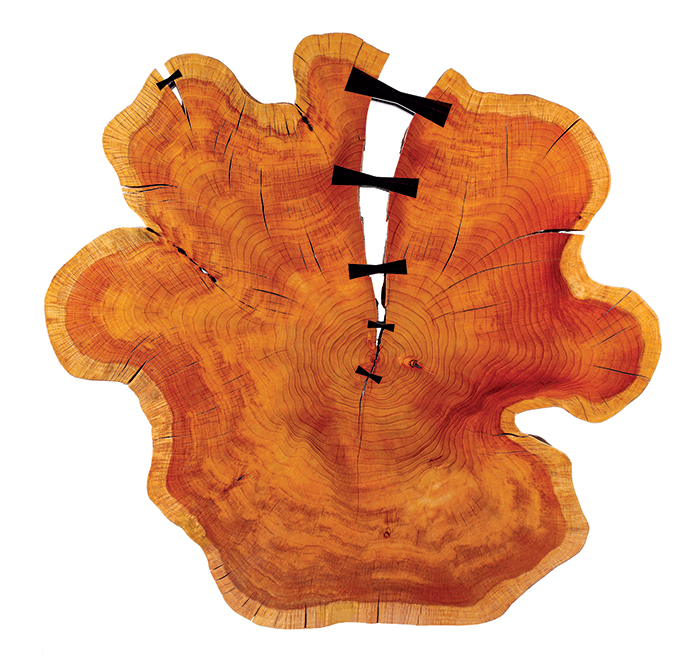 A natural crack in this giant sequoia slab is stabilized and embellished with Macassar ebony butterflies.

Asked to recall his first big break, Pollaro says there were actually two. Architectural Digest did a small mention, which prompted an Australian businessman to hop a jet and place a $400,000 order. “Our annual volume was only about $100,000 at that time,” recalls Pollaro. The second break came when legendary architect Charles Gwathmey, who was designing a home for David Geffen

(DGC Records and DreamWorks), said to Geffen, “Oh … and Frank is going to make your furniture.”

After the wood is chosen, sketches are made and, a year or so later, the much-anticipated piece is personally delivered to the client’s home. That’s how Pollaro met Brad Pitt. “I delivered a desk to his chateau in the south of France and happened to see a book of his [Pitt’s] sketches,” Pollaro says. A partnership (and friendship) was born. The Pitt-Pollaro collection (limited edition, signed and numbered) was launched in 2012. It includes chairs, tables and “Toi et Moi,” a sculptural marble bathtub for two. More pieces will be introduced in 2018. 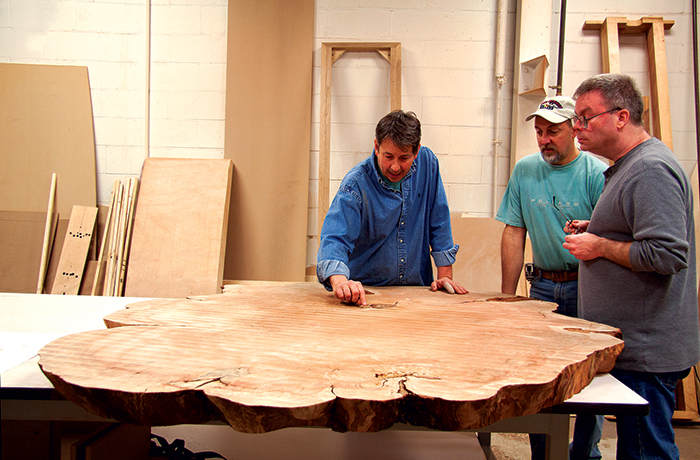 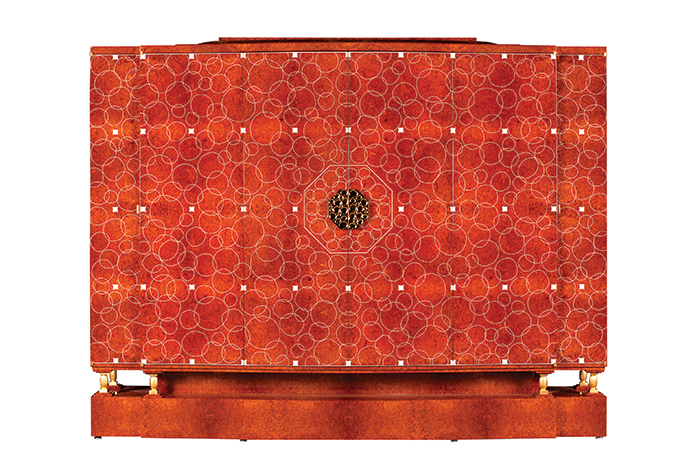 Loosely based on the work of celebrated French designer Émilie-Jacques Ruhlmann (1879-1933), this cabinet is made of Amboyna burl and inlaid with faux ivory. 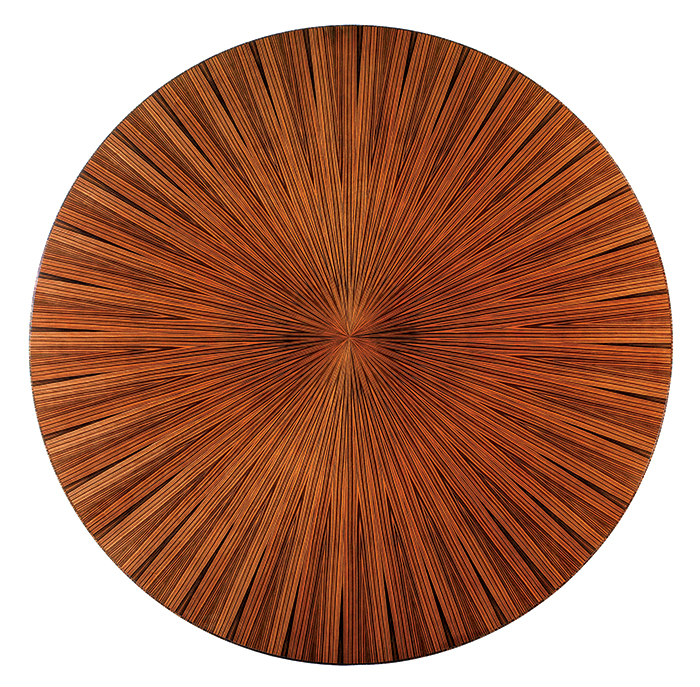 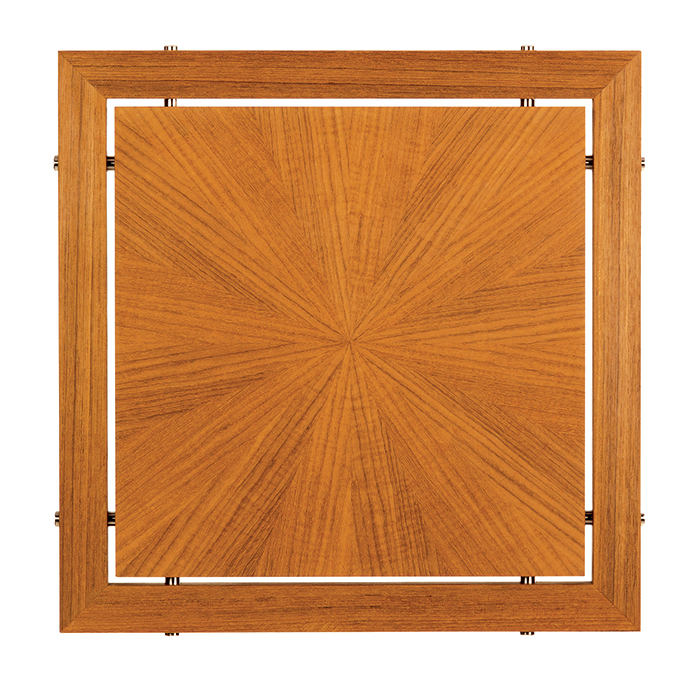 The top of a table is one of the pieces in the Teak + Titanium Collection launched at the Monaco Yacht Show in 2017.