A high-country home full of whimsy and wonder 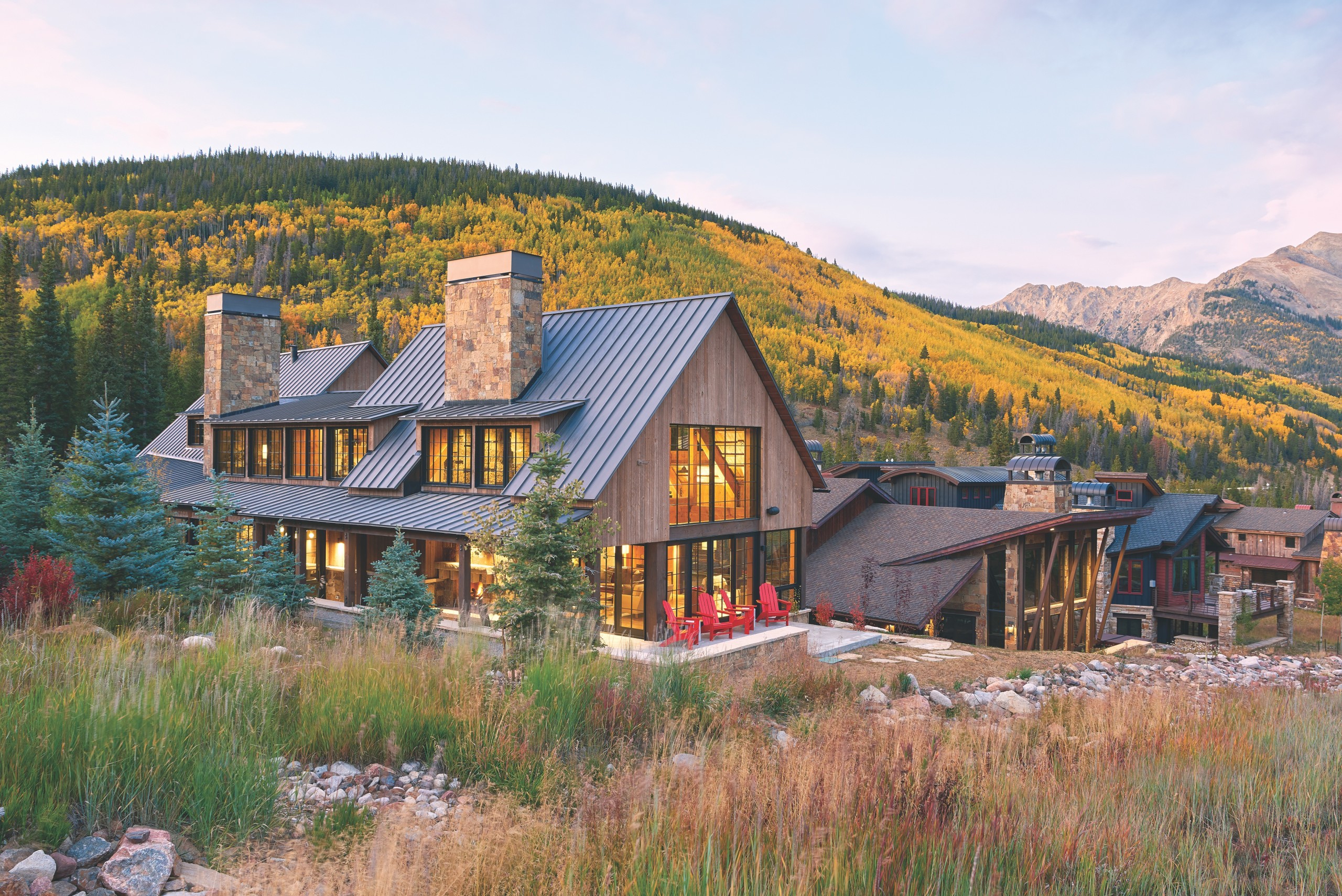 The house is welcoming from both sides. The front entrance includes a cozy covered porch. Coming home from the slopes, the homeowners are greeted by a wall of windows and red lounge chairs. | Photography by Vondelinde

When a family of ski racers wanted a home base for skiing, they found the perfect spot in Copper Mountain, Colorado. The true ski-in, ski-out location did pose some design challenges, however. With the lot’s narrow street-facing width and wide slope-side span, it would need a good dose of imagination to accommodate a dream home. Much of the vision would come from an unlikely source—an old barn. 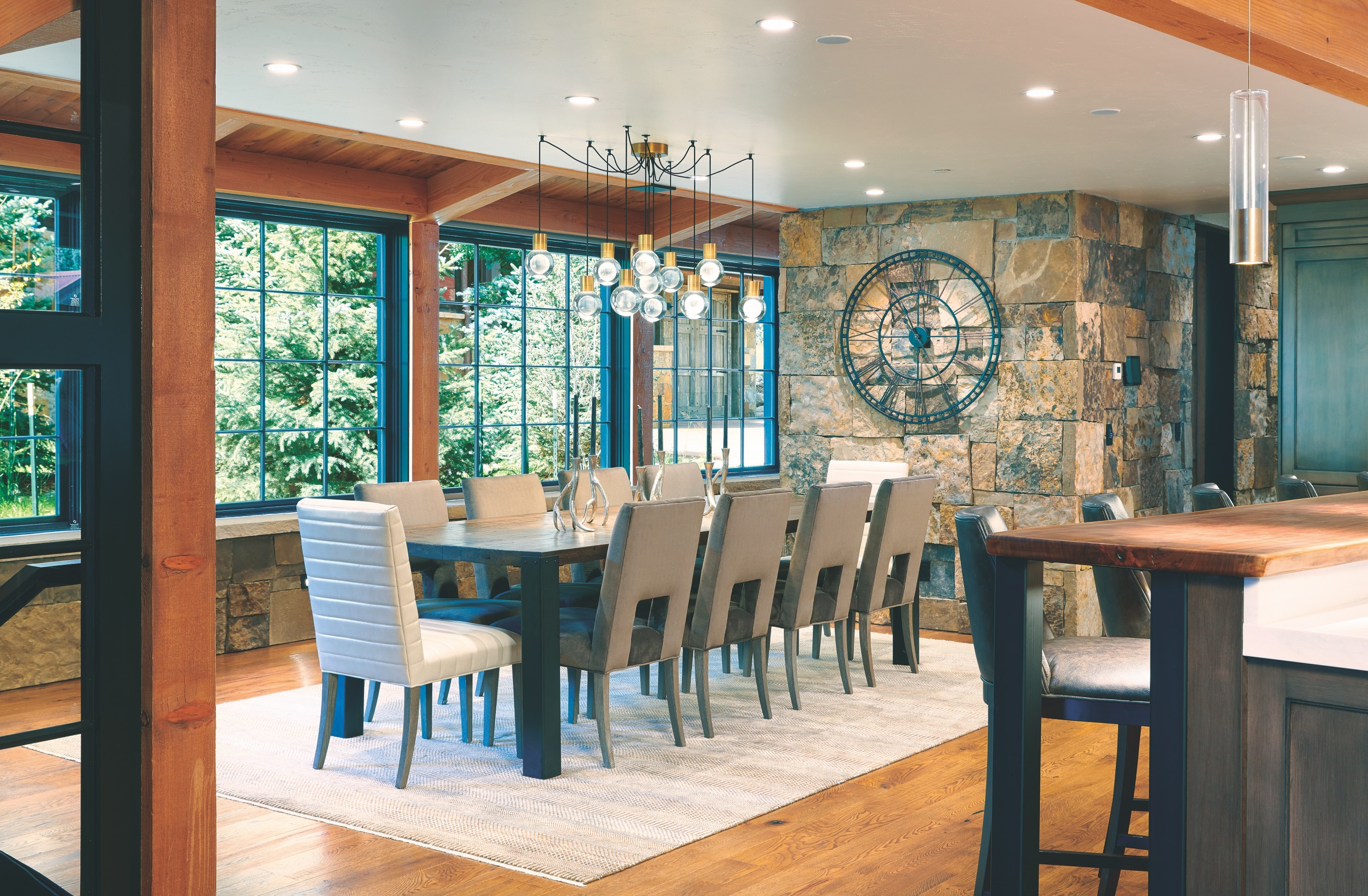 Because the dining table is quite long, the homeowners chose a semi-custom light by Tech Lighting. Gold accents, black cables and glass make it decidedly modern. The fixture emits diffused light because glass spheres sit inside larger glass spheres.

As it turns out, the homeowner husband spent his Midwestern childhood playing in a barn with a steeply pitched roof, warm hay loft and white-tiled milking room. His nostalgia would influence the home’s aesthetic. “My husband wanted a kind of barn,” the wife says. She wanted something more modern. “I was thinking about where things are headed as far as design. The worst thing I could do was build a home and have it be immediately outdated,” she explains. “How do you meld the two spaces together?” 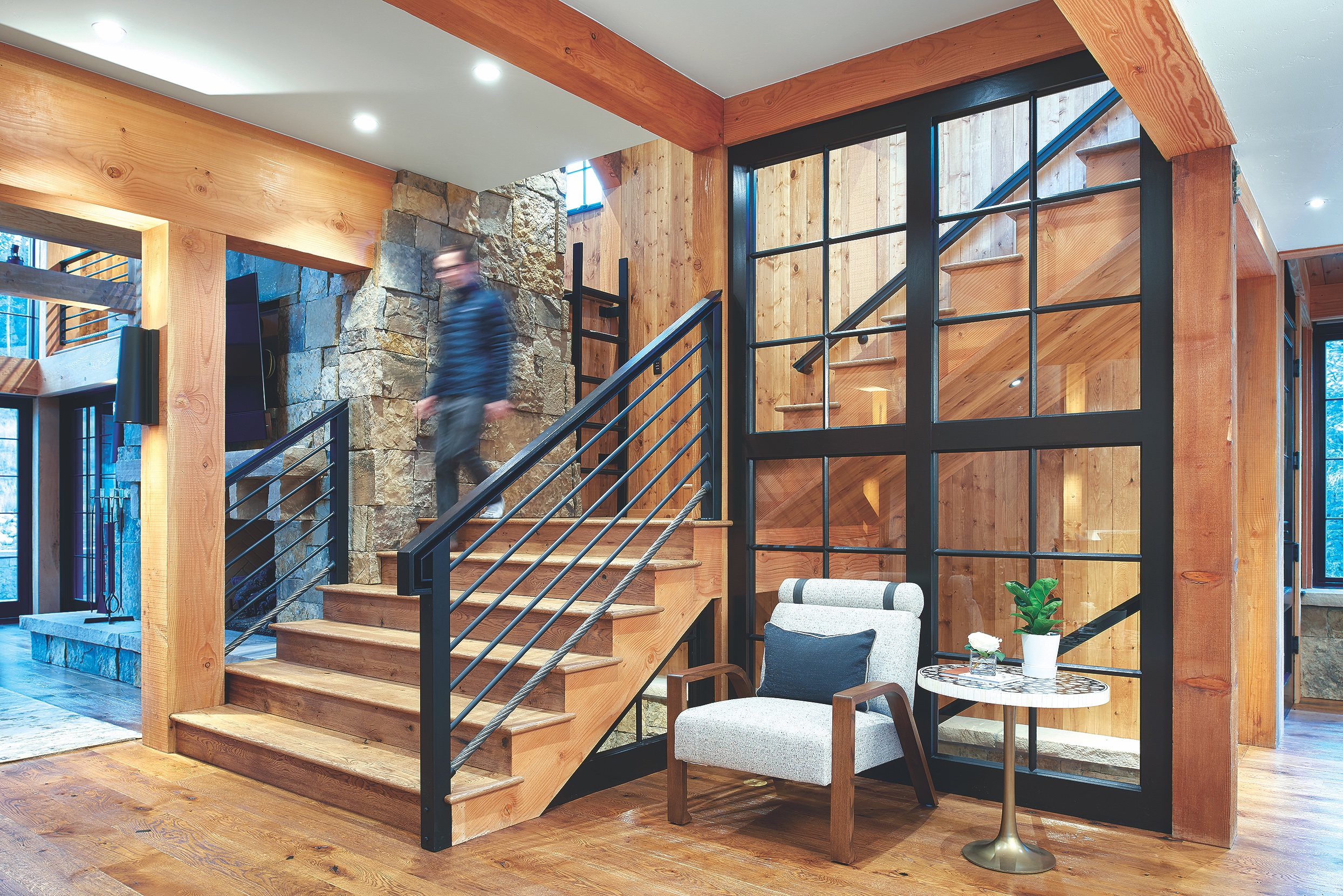 Even the staircase is framed by windows, calling attention to its warm wood walls and steps.

Architect Mark Stankey, design principal of PLAAD, and architect Matthew Byers, managing principal of PLAAD, were able to design a mountain home with a barn-like quality and industrial touches. They tackled the land’s trapezium shape by creating a barn-shaped structure—and breaking it in half. “The barn concept is snapped in half around the pivot point, which is the fireplace,” Byers says. Adds Stankey, “It’s the heart and hearth of the home.” 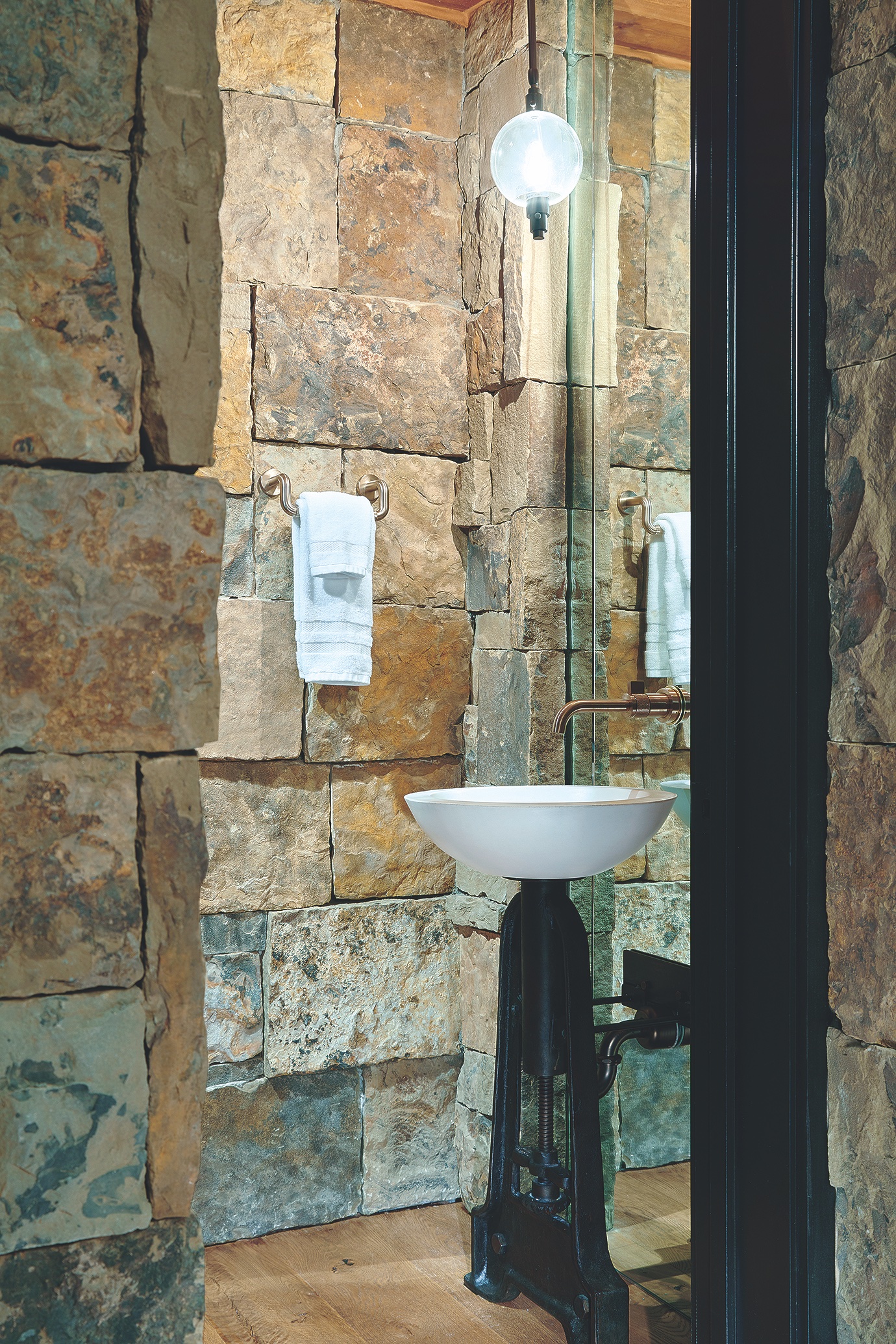 The stone staircase hides a powder room with an industrial-style vanity.

Interior designer Christina Romano also had to effectively marry the desires of the husband and wife: “He wanted it to be reminiscent of a dairy farm. She, on the other hand, wanted it to be clean and contemporary.” Romano ended up with an artful mix. “In the end, it’s a great blend of seemingly opposite design aesthetics. We kept finishes with a sense of nostalgia and incorporated more modern elements in the lighting.” 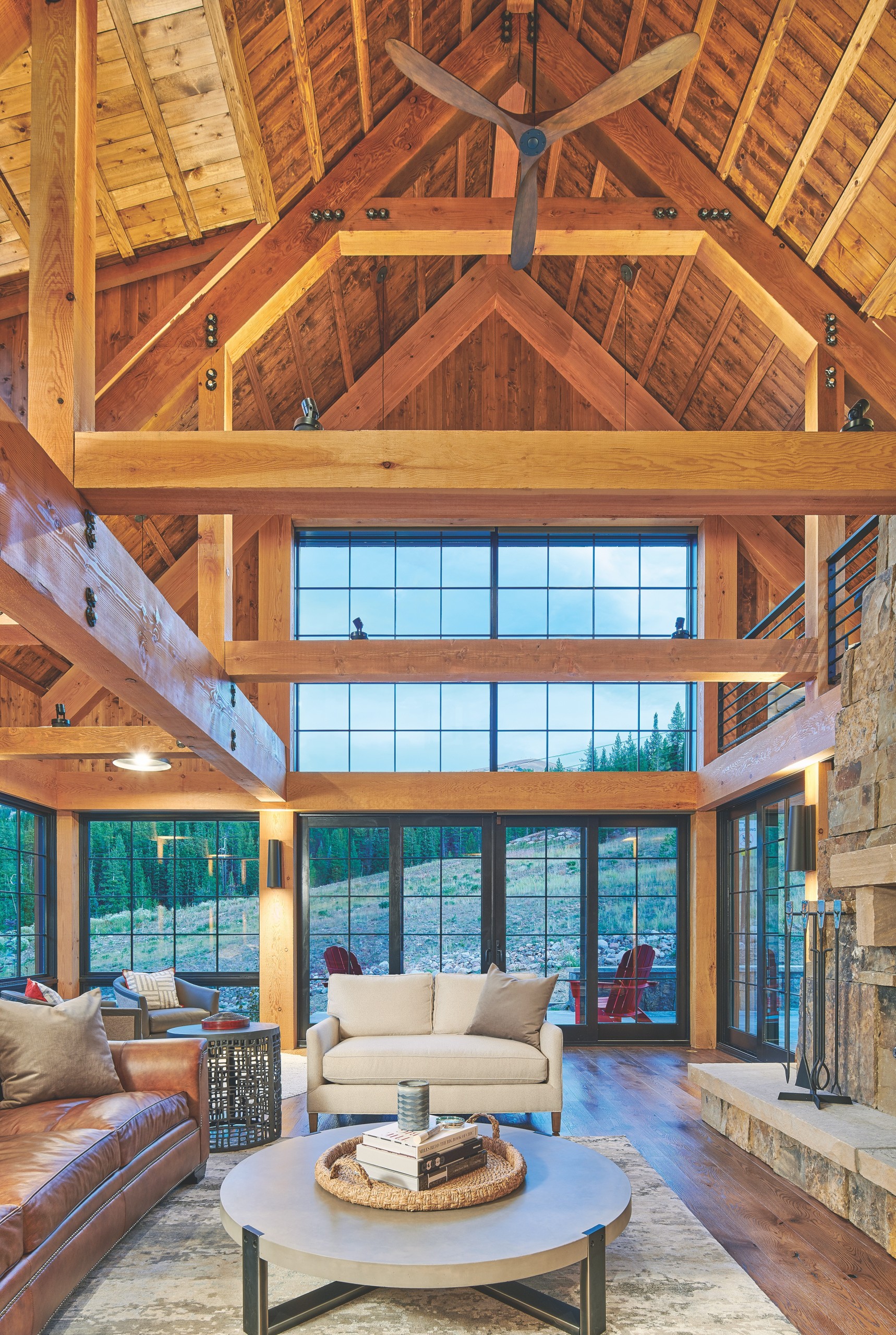 Wood and stone give the house warmth. “There’s a real feeling that comes back to being inside a barn,” Stankey says. “It is drenched in wood.” But the windows add a modern look. Says the wife, “I love industrial windows. That became a driving force for me.” A covered porch leads to the house’s main entrance, which gives way to a long gallery of divided-light windows. Romano comments, “Architecturally, it’s beautiful.” 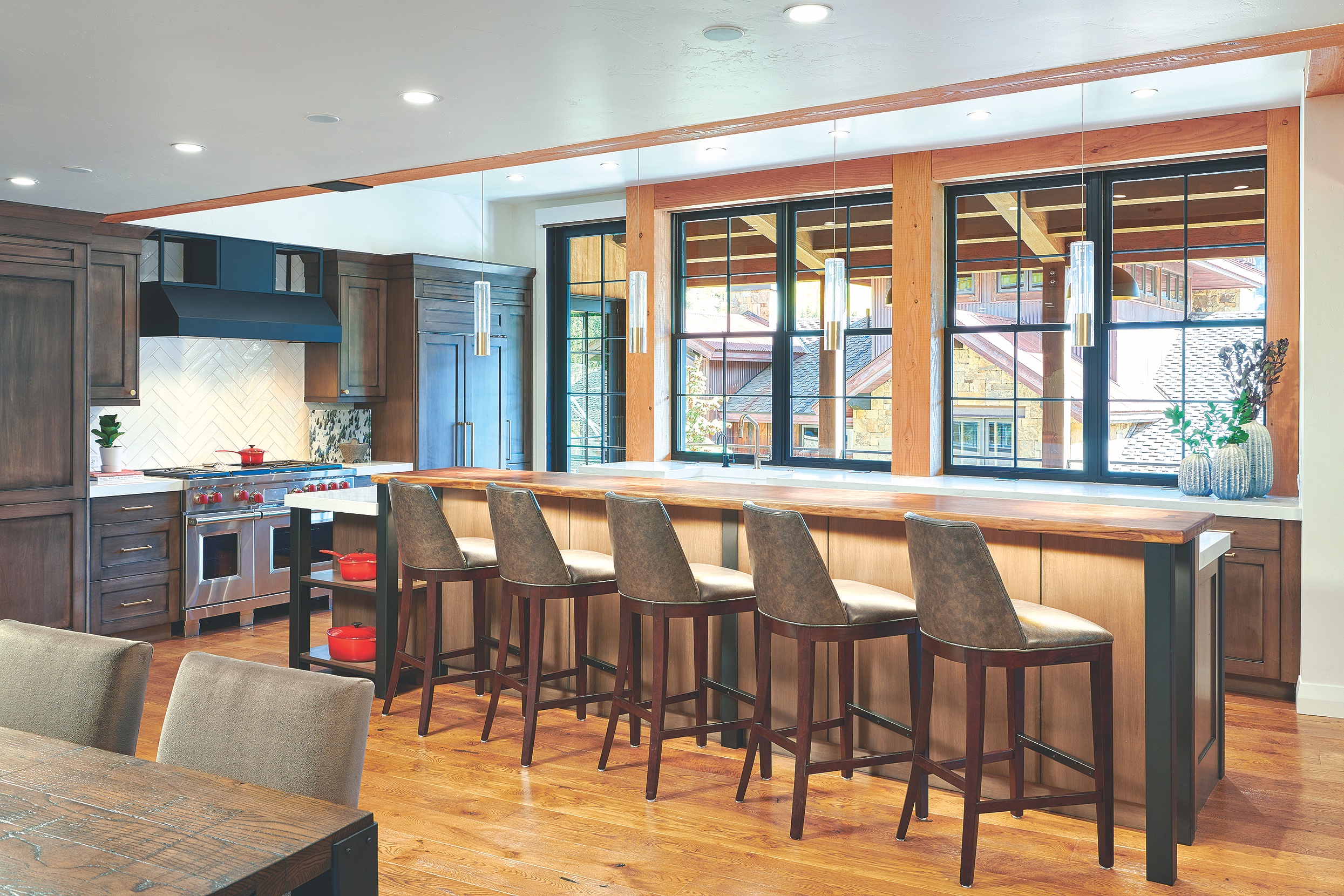 Touches of red in the kitchen include shiny enamel cast-iron pots, which can be passed through the double-hung windows by the kitchen sink.

The organic materials did make the building process slightly more challenging. “It’s difficult to incorporate different materials in a cohesive way, visually and from a functional standpoint,” project manager Chad Rowe, Pinnacle Mountain Homes, explains. Thankfully, the easygoing nature of the homeowners made construction easier. “They’re a really great family,” says Rowe. “They engaged at a level that was fun-loving, and they were excited about the process.” 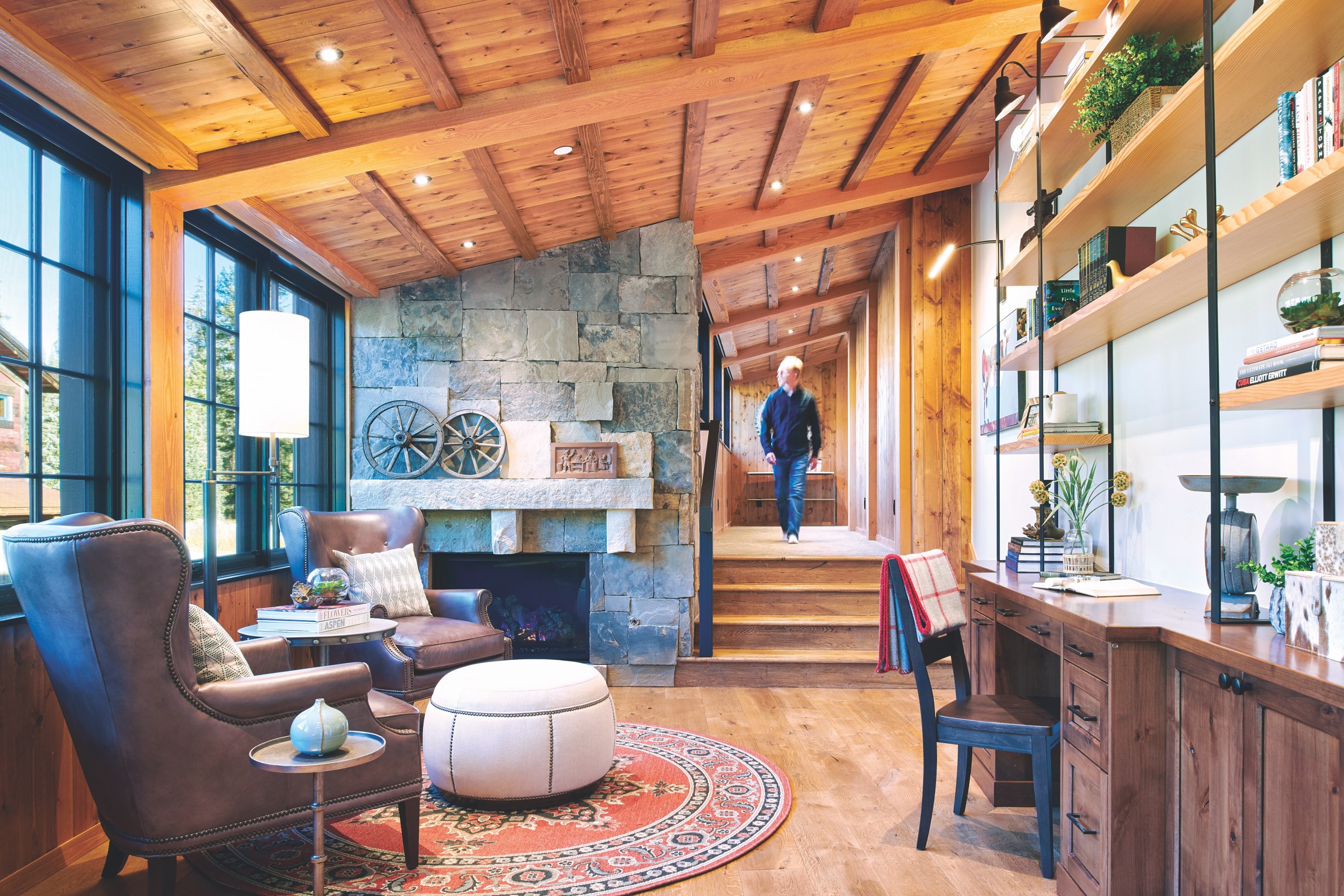 One of the homeowners’ favorite spots, this cozy sitting area provides a place to relax. Big chairs and an ottoman let visitors put up their feet and enjoy a good book. The house includes informal sitting areas where visitors can take in views of the ski mountain.

Because the homeowners wanted to capture a sense of childhood exploration, the home’s design is infused with unexpected whimsy. For example, the stone staircase conceals a half-bath on the lower floor, and leads to a secret playroom by way of a ladder. There is also a wonderful game room on the lower level. “When you walk downstairs, the first thing you see is the bowling alley and game tables,” Rowe notes. “That speaks to me because I love what it invites—engagement with family and friends in a fun atmosphere.” 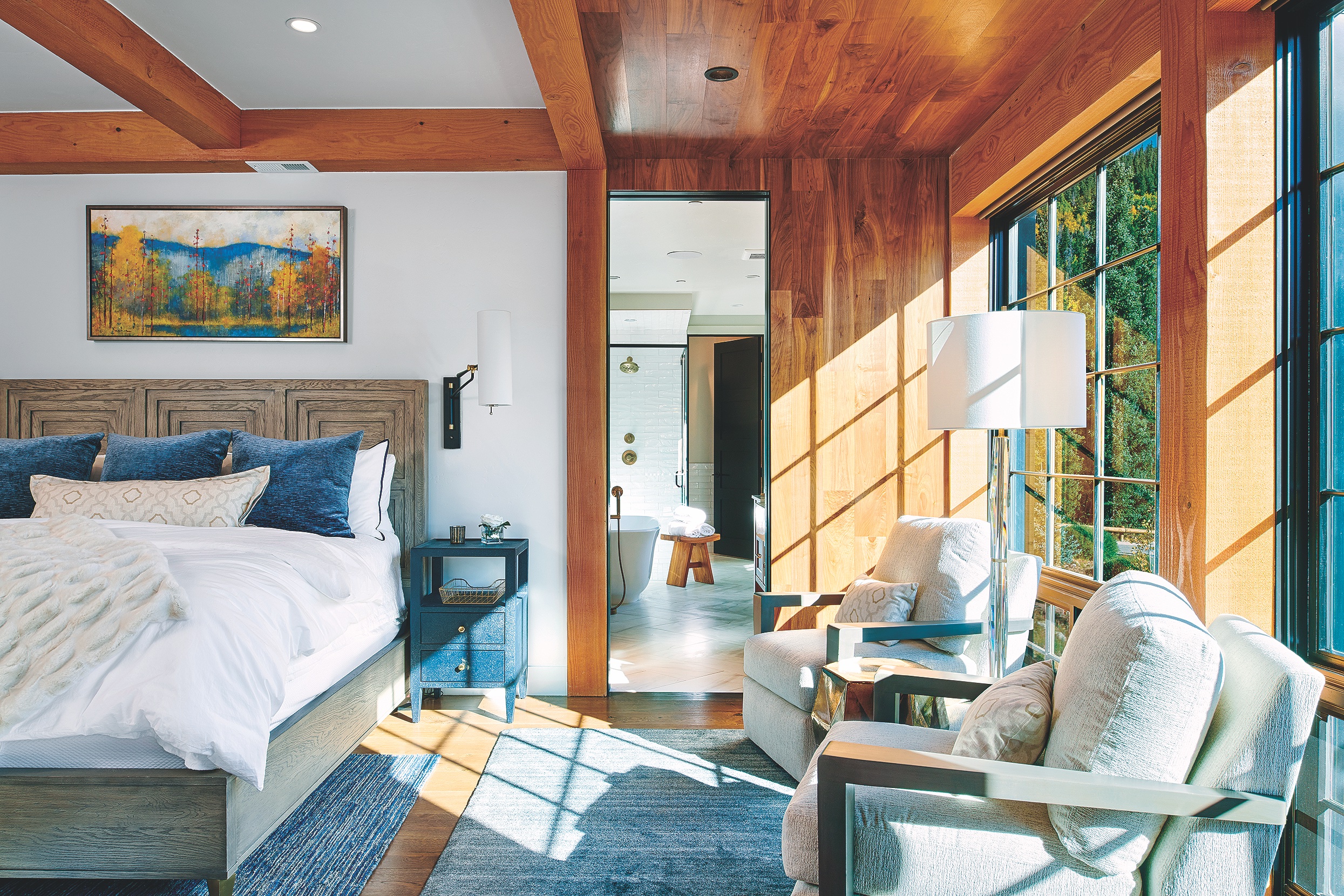 The house includes informal sitting areas where visitors can take in views of the ski mountain. 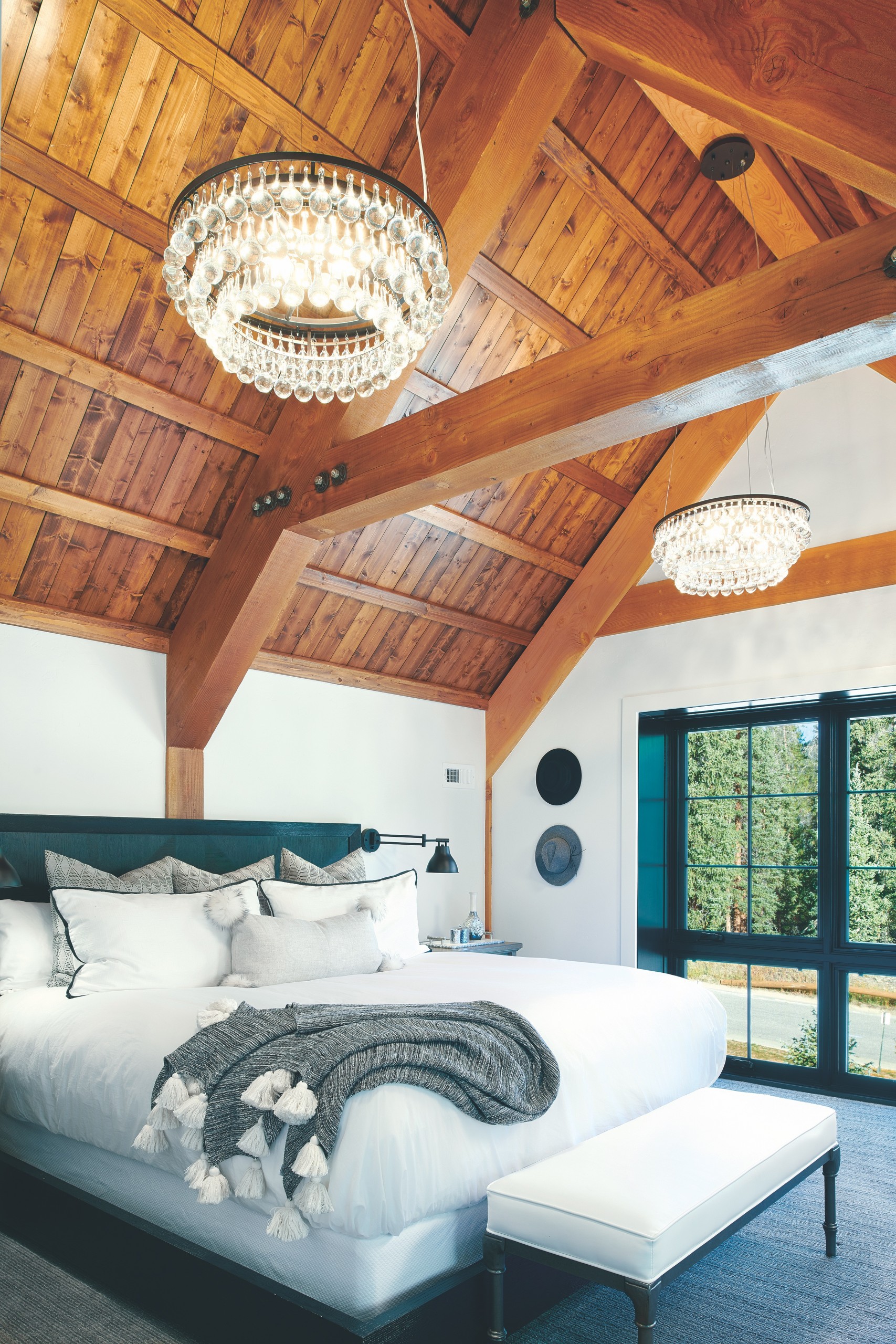 Since the house is not the primary residence, the homeowners got creative with the lighting. In one bedroom they chose chandeliers with glittery concentric rings.

Spending time together is exactly what the homeowners wanted—for now and later. The home includes one girls’ and one boys’ bunk room for any grandchildren who might arrive in the future. “Some of the best vacations for our family, especially when the kids were little, were ski vacations,” the wife recalls. “You’re outside, you’re together, you go out and ski all day, you come back, everyone’s tired—and it’s the perfect day.” 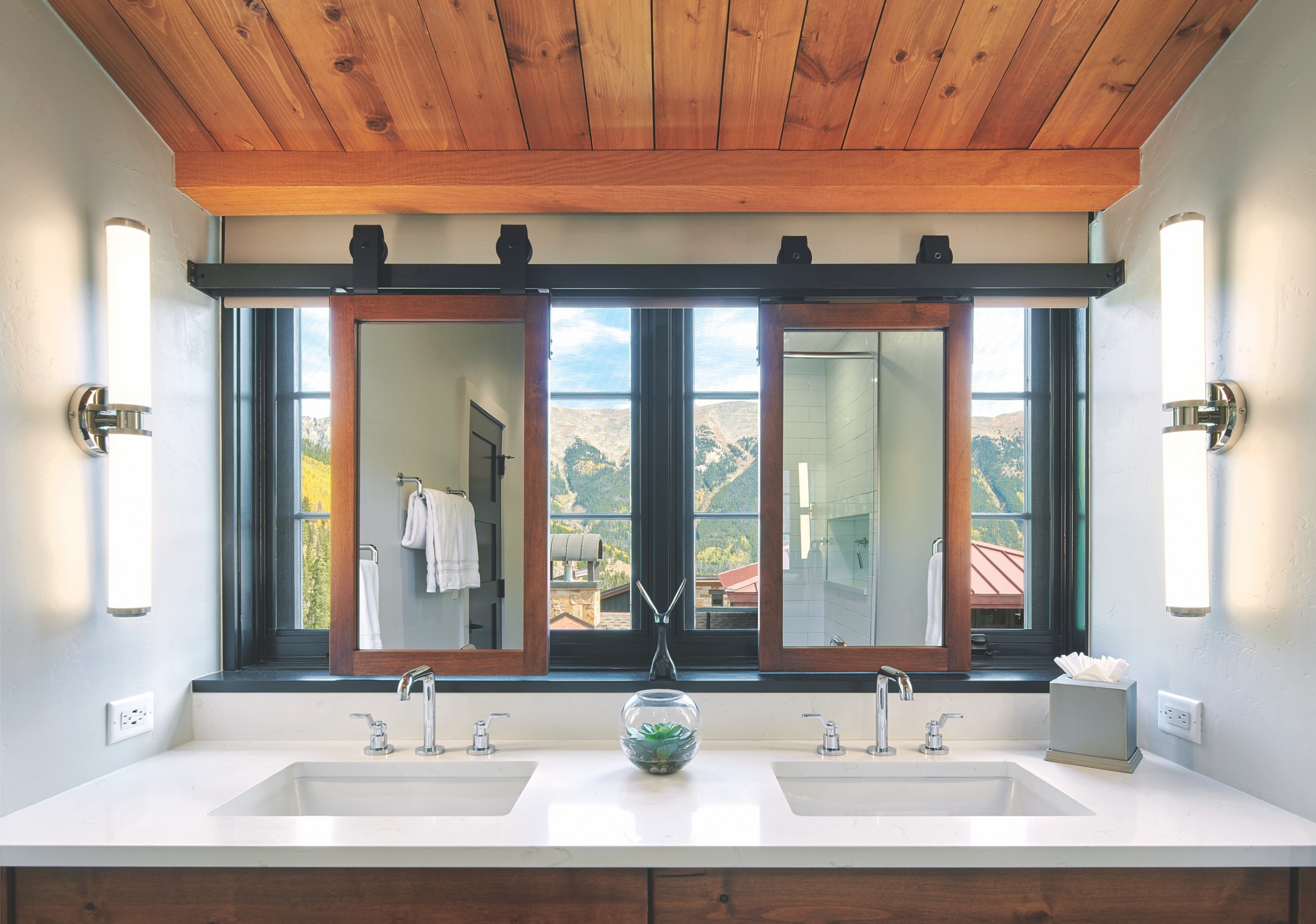 The bathrooms have industrial touches such as mirrors that slide along metal rails, a solution that keeps from blocking windows.

When the homeowners found their ideal ski-in, ski-out location, they noticed that some mountain homes had a lot of showy rooflines. “They felt that some mountain architecture could be loud and overly articulated,” says design principal Mark Stankey. “We wanted to be more impactful by being quiet.”
Since the HOMEOWNERS WANTED THE HOUSE TO TAKE ITS DESIGN CUES FROM A MUCH-LOVED BARN, the architects were able to combine form and function. “There’s a reason barns are shaped the way they are,” says managing principal Matthew Byers. “We were very conscious of how we were shedding snow and water—that was an important design consideration.” The roof needed to work well. “For our climate zone, we have a tremendous amount of snow load,” explains project manager Chad Rowe. The house is at high altitude, and the area gets about 300 inches of snow annually. “We call it a double-roof system,” says Byers. “The client was adamant that there be no leaking in the house.” But it was also IMPORTANT FOR THE ROOF TO BE BEAUTIFUL FROM ALL ANGLES, since the family would be approaching their home from the slopes. “People would be seeing it from above, so it needed to nestle into the hillside,” says Stankey. “The roof is quite special. There’s visual interest in the roof planes—it’s sculptural.”