A Castle on a Hill

Constructed by local craftsmen from indigenous stone and hand-hewn timbers, Montana’s Great Northern Lodge was built for the ages

This was a house that took 10 years just to imagine. The homeowners, a couple from Milwaukee, visited their property regularly for a decade before they ever hired an architect. They stood there, on the side of a mountain overlooking Glacier National Park, and dreamed of what might be. “We wanted to build something that would last hundreds of years,” says the husband.

Enter Jamie Daugaard, principal of Centre Sky Architecture, whose own philosophy centers around the timelessness of design where structure and site become one.

“Jamie saw things in 20 minutes that I didn’t see in 10 years,” says the homeowner.

Together, and with a dream team of craftsmen—led by contractor Walt Landi of High Country Builders in Whitefish, Montana—Daugaard, interior designer Debra Shull and the homeowners transformed their vision into an inhabitable stone-and-wood masterpiece. It took 15 years from the time they purchased the land to the day the couple moved in. But the time was well worth it, they all agree.

“If there is a castle in Whitefish,” Daugaard says, “This is it.” 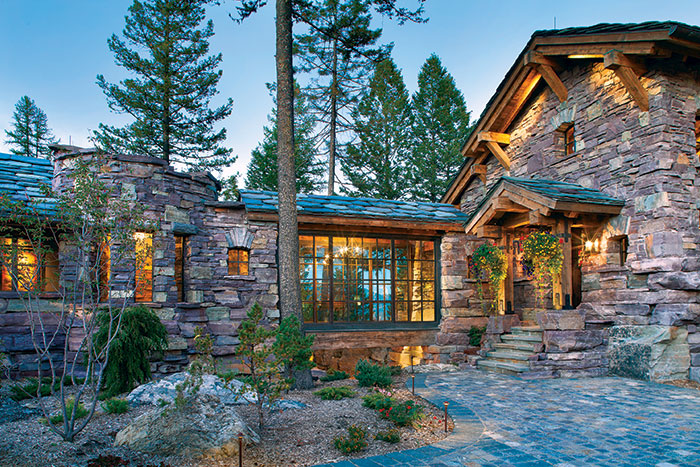 Magnificent stonework—much of it done by Matt Riley of Riley Masonry in Kalispell, Montana—is the most prominent feature of the home.

“Even as they crumble and decay, the stone walls stay part of the landscape.” — Architect Jamie Daugaard

Once Daugaard signed on, the team got to work, but not in the way the homeowner expected. “I thought we would start with pictures,” he says. “I thought Jamie would start by drawing. But on day one, he wanted to name the house.” The homeowner, a history buff and train aficionado, settled on Great Northern Lodge, an homage to the railroad company that put Glacier National Park on the map.

The design takes more than a little inspiration from Glacier Park’s Sperry Chalet, a 1914 structure the owners fell in love with on one of their early visits. In fact, to have access to the rare purplish stone used in the Sperry Chalet, the team opened and operated a quarry west of Kalispell for more than two years to mine what they needed for the house. 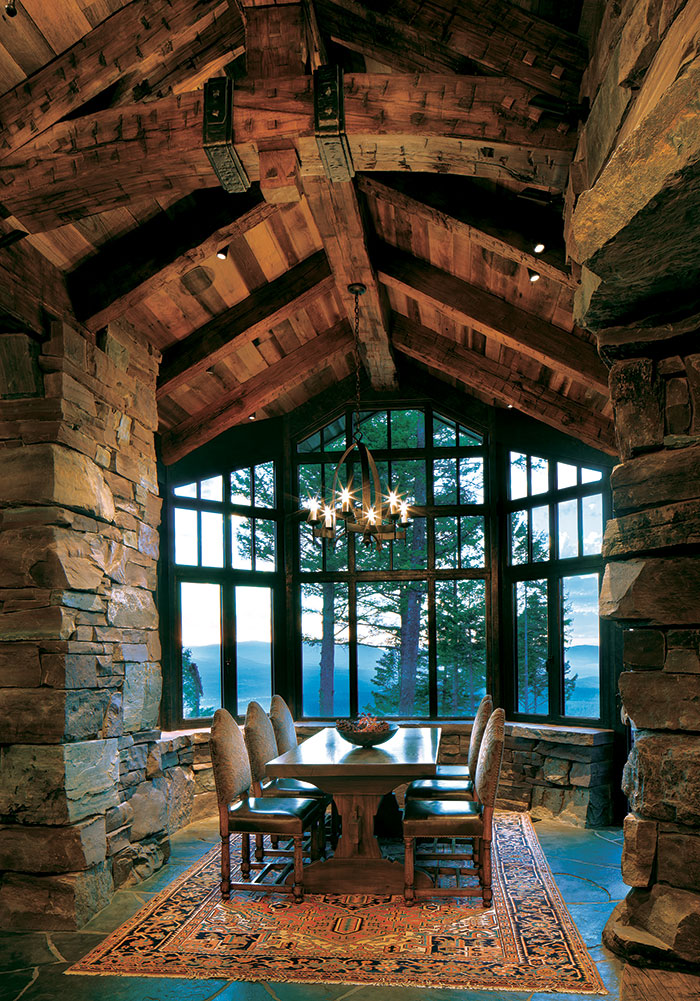 The stunning bronze windows, here in the breakfast nook and throughout the home, were imported from Astec Windows in Venice, Italy.

With more than 12,000 square feet of living space, Great Northern Lodge is as grand in scale as anything man-made in these parts. Daugaard started with view corridors—the site straddles Whitefish and Beaver lakes—and precarious alpine topography. “Those things start to talk to us,” he says. From there, the design was driven by the homeowner’s desire for “every space to be special,” says Daugaard. The structure itself unfolded from a breathtaking interior staircase built into an existing rock outcropping. 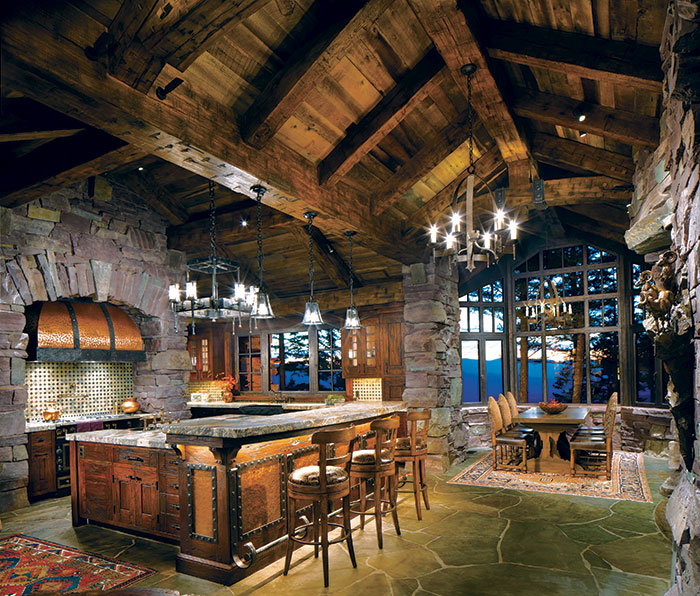 The kitchen was built around a La Cornue range, a work of art Shull calls the pièce de résistance. “You always start with something amazing, and everything unfolds from there,” she says of the French range that took six months to acquire. Because the owners did not want anything contemporary, Shull chose copper panels, bronze finishes and an iron chandelier.

For these homeowners, the property had to add up to more than 360-degree views, robust materials and stunning architecture. It had to be a work of art down to the last detail. This was achieved with the help of designer Debra Shull of Haven Interiors in Bozeman, Montana, who saw their vision as a mandate and made sure everything in the house—from the finishes and cabinetry to the lighting fixtures and “even the curtain rods”—was custom made over the five-year design-and-construction period.

“Great Northern Lodge, to me, is a museum piece,” Daugaard says. 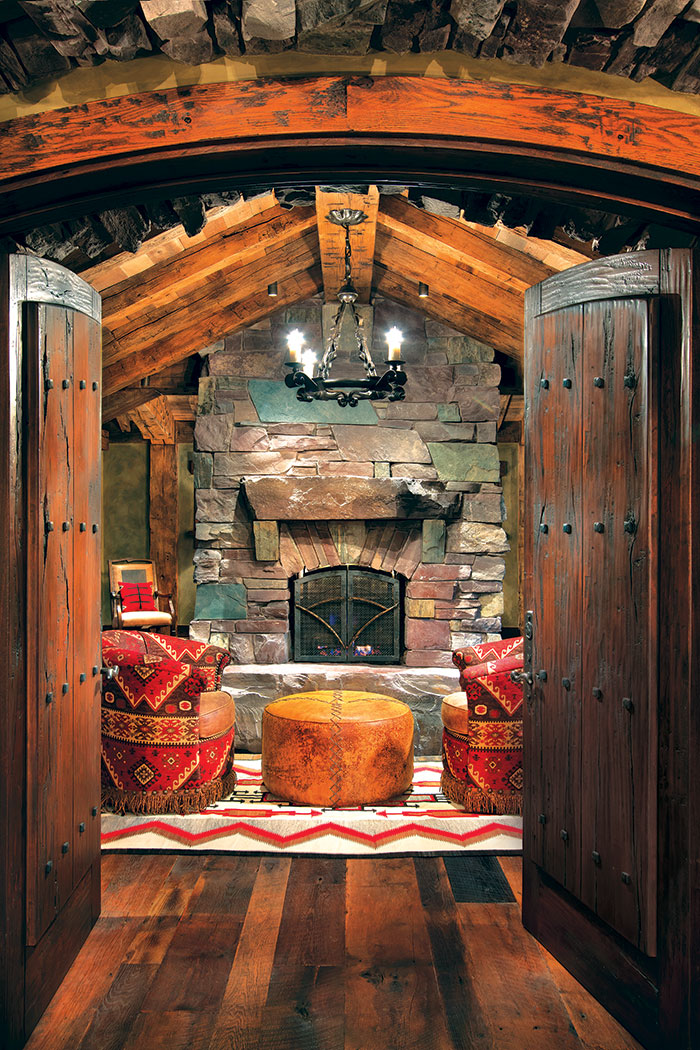 In this guest suite, custom chairs are by Haven Interior Design and the chandelier is by Dragon Forge. These doors, and custom cabinetry throughout, are by Montana Sash & Door.

What makes the home all the more special, say the homeowners, are its comfort and livability. Shull worked with classic finishes and materials, many of which are still seen in chateaus that date back centuries. Every rug is at least a hundred years old. “If it’s never been in style, it will never be out of style,” she says.

The intention and artistry behind Great Northern Lodge circle back to Daugaard’s thoughts on castles. “Think about the old castles in Europe,” he says. Even as they crumble and decay, the stone walls stay part of the landscape. “These walls aren’t going anywhere,” he says.

As the sun slips behind green mountains, you can let yourself believe, for a moment, that some things will last forever. 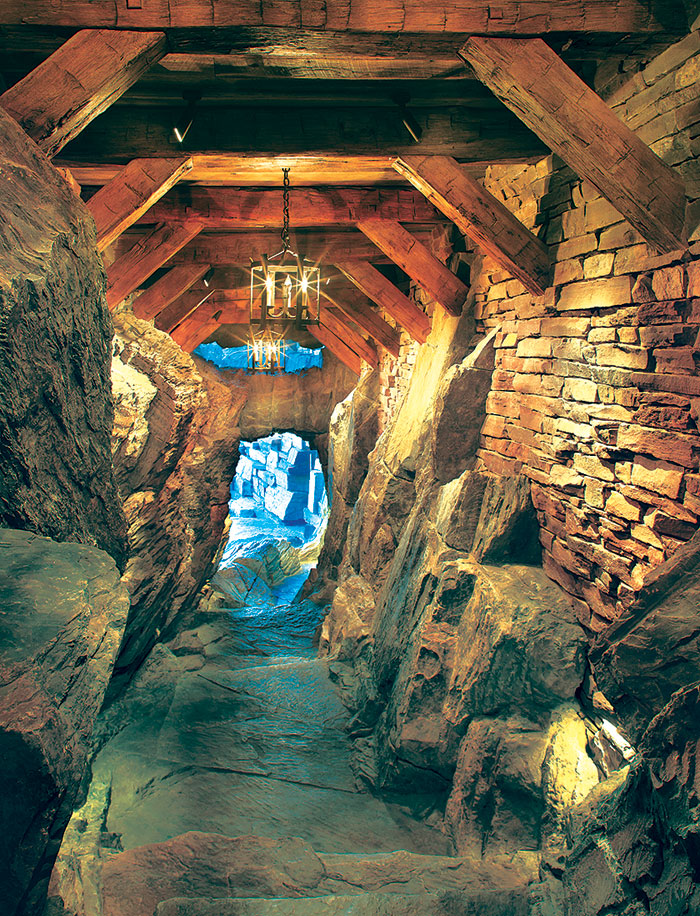 This hidden staircase to the office was built into an exposed cliff edge and inspired the rest of the design, says Daugaard. 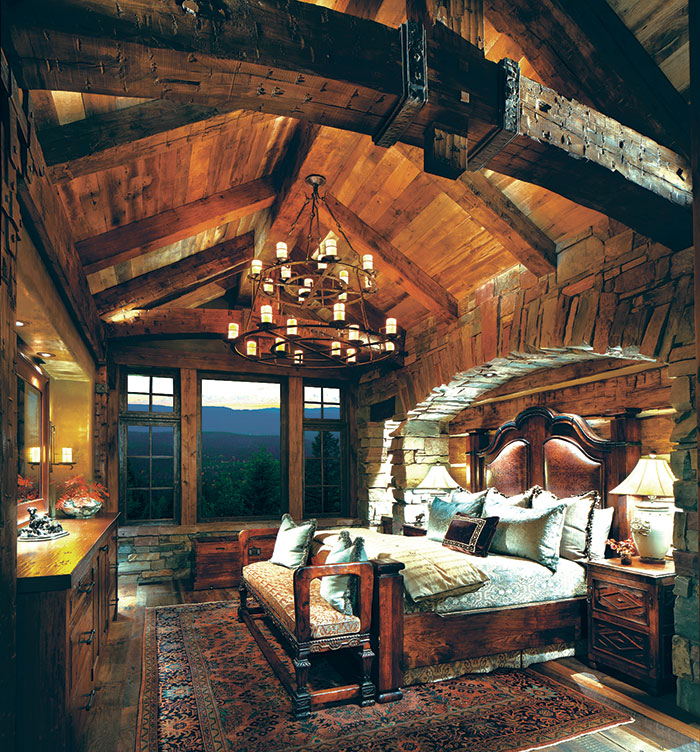 In a decidedly masculine home, Shull used fabric and color, as in this 1920s Persian Mahal rug, to soften the interiors. Numerous outdoor seating areas were built into an existing rock formation. 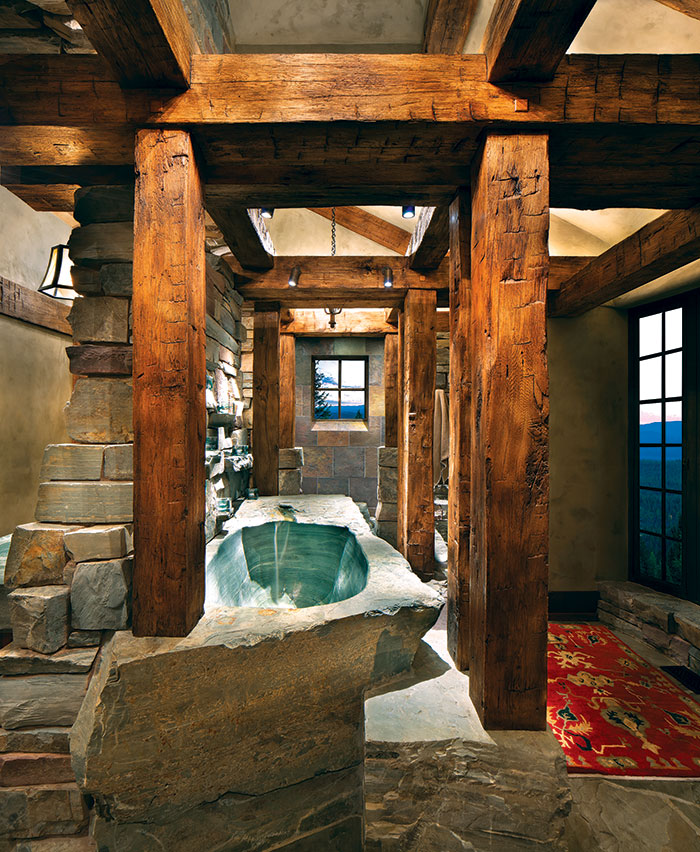 The 10-foot, 12,000-pound stone bathtub was hand-carved by Sean Henry and Jonathan Kersey of Rock & Water International. White oak beams were hand-hewn by contractor Walt Landi and his son Luke. 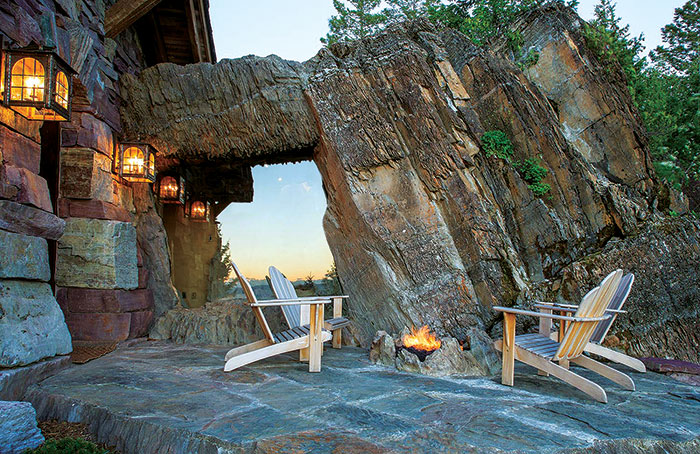 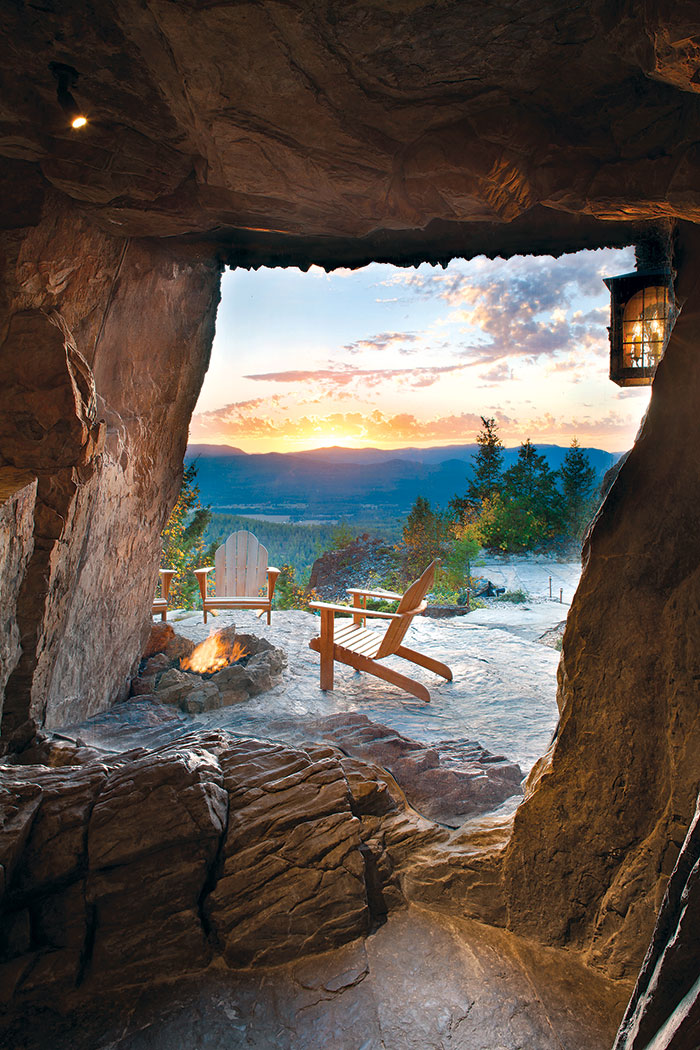 While conventional wisdom led many to rein in construction costs during the recession, these homeowners saw an opportunity: “We thought it would be a great time to have access to the very best craftsmen in the region.”

In all, the team employed 7 blacksmiths, 12 masons, 9 custom lighting craftspeople, 7 custom tile companies, 3 mosaic tile artists and 22 custom furniture companies, among other artisans. Contractor Walt Landi of High Country Builders assembled the team and, according to Shull, inspired excellence at every turn. “Everyone was so proud of their work,” she says.

The remarkable roof—itself a mosaic of massive slate slabs, modeled after roofs in Zermatt, Switzerland—was designed, cut and installed over the course of two summers by a slate artisan from Vermont. Every part of this home, every detail, and every player, says Shull, was “the best of the best.”

Simply put, Daugaard says, these homeowners were not just clients but rather “patrons of architecture.”

The time and investment paid off. The team delivered. “I’m a perfectionist,” says the homeowner, acknowledging that it can be a curse. “When I go into a home, I fixate on the 2 percent that’s wrong, not the 98 percent that’s right,” he says. For five years he traveled to the site every six weeks and spent days looking for things to fix. “In the end,” he says, “we ended up with something as close to perfection as I think you can get.”

Taking Root in a Home Along the Snake River