When John Gallis delivers a piece of his Molesworth-style handcrafted furniture to a client, he knows what typically follows. “They say, ‘John, it’s better than I expected,’ and that’s what I strive for,” Gallis says. “We’ve always done things artistically.”

Rather than trying to bend the wood to his will, Gallis lets nature be his guide, often sitting beside a juniper tree in the mountains until inspiration strikes. “It sounds weird, but I get the tree involved,” he says. “What do you want to be?" An arched branch might hang on the wall of his shop for months before he incorporates it into one of his furnishings as the top of a mirror, or a chair leg. “I eat, sleep and drink woodworking, I can’t get enough of it.” 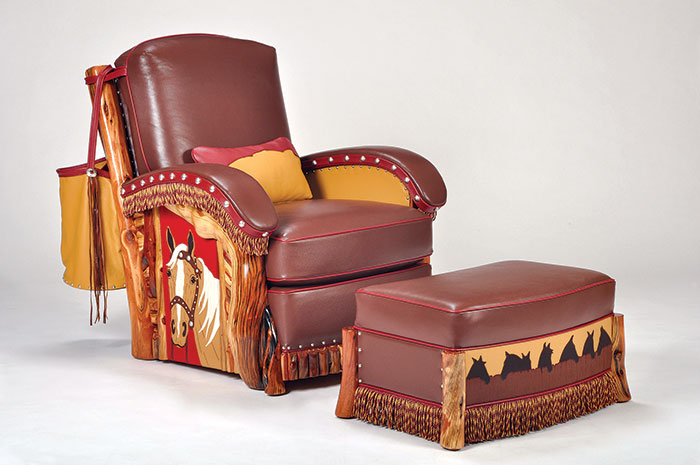 The Silver’s Club Chair is made of native Wyoming juniper. This chair is a joint collaboration between Norseman Designs West and Anne Beard. Photo by Ron Maier.

On the back of his Studebaker Route 66 club chair, Gallis used dozens of curved sticks to create the image of a highway leading into the mountains, the setting sun overhead.

Such attention to detail is a hallmark of his work. Rather than buying store-bought tacks for a pheasant-hunting-themed chair, for example, he made his own using spent 20-gauge shotgun shells. “It added so much elegance,” he says. “Every piece has a complete story.”

"I eat, sleep and drink woodworking, I can’t get enough of it."

Many of his designs incorporate carved leather, metalwork and other materials made by local artisans. It’s one of the ways that Gallis has connected with the area after relocating from Long Island in 1996, where he worked as the chief cabinet maker at Bloomingdale’s in Manhattan.

It’s not just the arts community. Every year, Gallis teaches a popular two-day woodworking class. He has also donated many of his signature desks to the Knights of Columbus for fundraisers. And when a local resident asks to have a piece of wood milled, Gallis often takes his payment in donuts.

“That’s the right thing to do in a community,” Gallis says. “It’s not just about the money. Being nice to people is rewarding enough.” 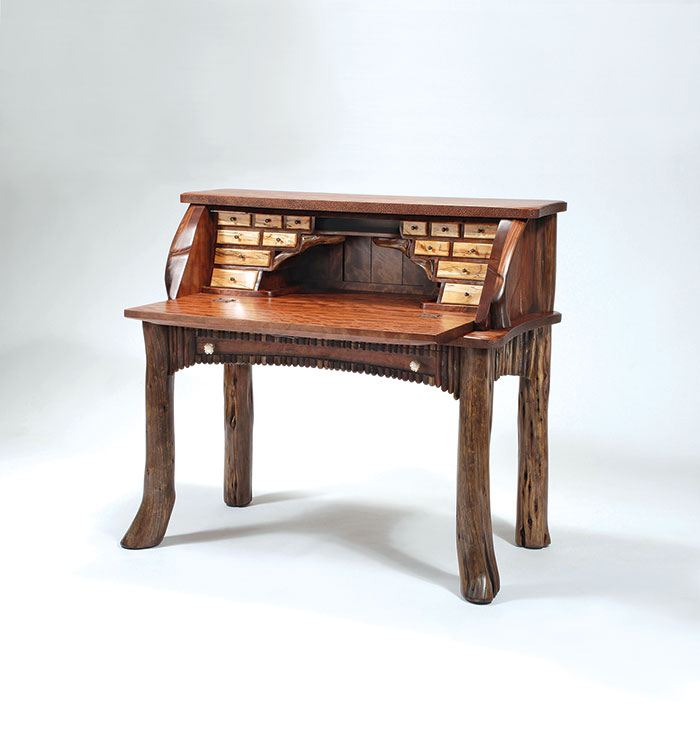 The Dragonfly Desk blends beautifully with refined Western décor in African cherry with juniper legs and a dragonfly accent on the drop front. Photo by Ron Maier.

Moved to Cody, Wyoming, from New York City in 1996. This is his 43rd year of building furniture.

GREATEST TRIUMPH
“I designed and helped build my house. A cowbell is the off-the-grid doorbell; I cast my hands for the towel bar. From start to finish, everything in that house is me.”