In an ideal world, architecture not only stands on its own but also enhances the property and surrounding area, and that has been a guiding principle for Jim McLaughlin since he started his Ketchum-based firm in 1975.

“We don’t have a particular style,” he explains. “We try to design to be a good neighbor, not only to the environment but with respect to the fabric of the community as well.”

Early in his career, McLaughlin earned his pilot’s license— a strategy to expand his business opportunities that has paid off handsomely. Since then, he has designed spectacular abodes in Idaho and surrounding states, as well as Hawaii, Costa Rica and New Zealand, where he designed a fishing lodge built with wood accents from a demolished wharf and old telephone cross arms. 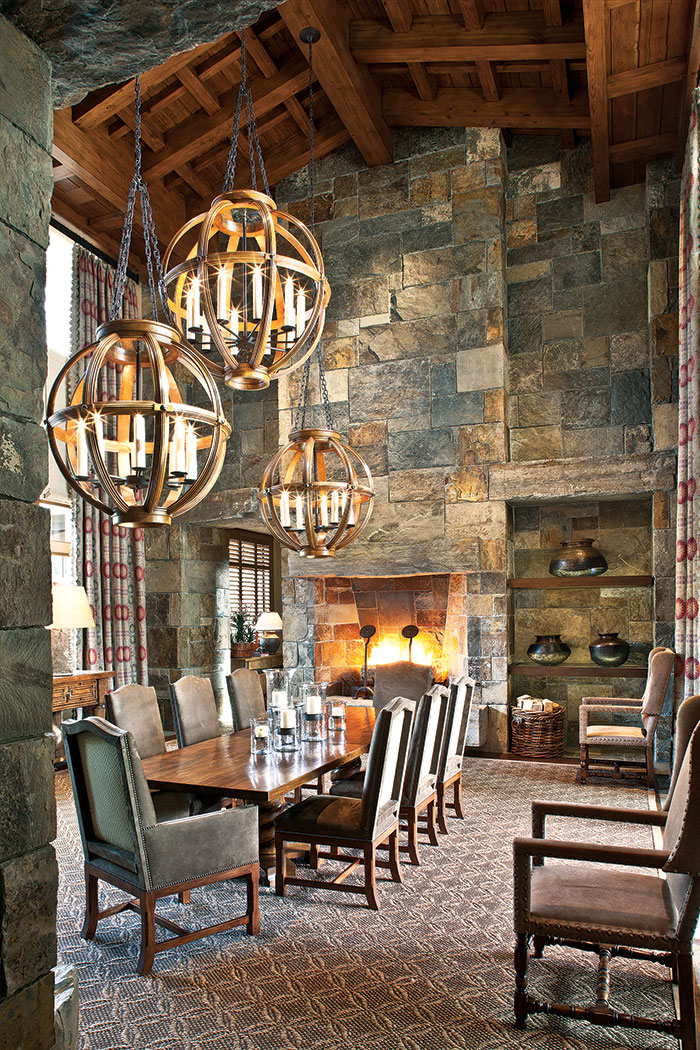 This formal dining room is  unique with facing stone fireplaces on each end of the room. The custom round wood-and-metal light fixtures and the highly detailed beam ceiling add to the grandeur of the room. Casual outdoor dining is adjacent on an outside terrace. Photo by Grey Crawford.

“We used native stone and weathered local timber to build a lodge that not only fit into the environment but looked like it had been there for 100 years,” he says.

His clients include a Who’s Who of notable people, including sports figures, venture capitalists and celebrities such as Arnold Schwarzenegger, who, during construction, would often invite McLaughlin down to the studio and review architectural plans in his dressing room in between shooting movie scenes.

"We try to be a good neighbor, not only to the environment but also to what’s existing."

McLaughlin has also done pro bono work, designing the original senior citizens’ center in Hailey, Idaho, for example. And he served as the chairman of the planning and zoning commission in Sun Valley for more than two decades.

During his tenure, McLaughlin helped to enact one of the first dark sky ordinances in the country. “When it’s a clear night, you see millions of stars that you’d never see in other places,” he says. “It’s really special.”

MAKING A DIFFERENCE
Advocated for Idaho’s first dark sky ordinance—one of the first in the nation.

FAVORITE MODE OF TRANSPORTATION
Flying—-he is a licensed pilot.