Charles Cunniffe has spent the past four decades refining his iconic architectural style—throughout the U.S., with a majority of his residential projects in the American West—but his fascination with materials and scale started much earlier. “My father was a builder [in Massachusetts], so I was always building—scale models and, later, treehouses and forts,” he says. “In the eighth grade, I declared that I wanted to be an architect.”

While still in college (Rhode Island School of Design), he took summer jobs at architectural firms all over New England. Sketching ideas quickly, he was often tasked with doing the early design work that, in the days before computer-aided design (CAD), consisted of making drawings on paper and scale models. 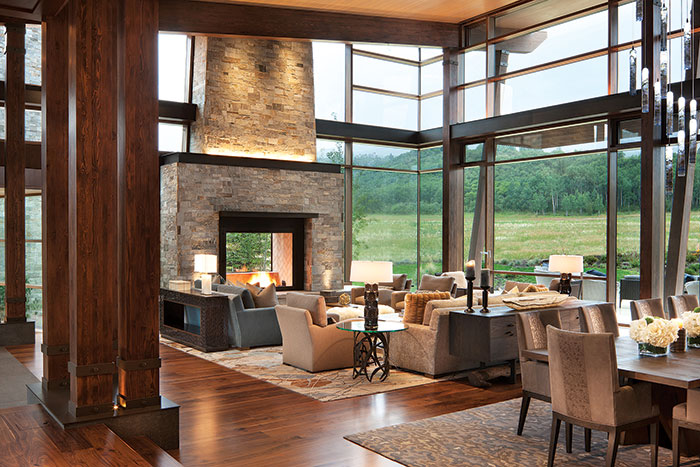 This LEED Silver Aspen home was named the 2017 Mountain Living Home of the Year. With its large expanses of glass, the home was designed to bring the outdoors in. Photo by David O. Marlow.

In 1979 Cunniffe was invited to Aspen to become the project architect on a massive renovation of Aspen’s historic Hotel Jerome. The office was directly above the bar, and, at night, Cunniffe bartended on the main floor and managed the nightclub in the basement, sometimes playing drums with the band. “My whole life during that time was lived on three floors of the Jerome,” he says with a smile.

"A work of architecture should enhance the human spirit."

Eventually, he struck out on his own, leasing office space from John Denver and hanging out his shingle. One of his first big commissions was a home for Goldie Hawn. Today, Charles Cunniffe Architects has 21 employees, including 17 architects.

When asked to describe his distinctive style, he credits it to the “extra” classes—sculpture, glass blowing and furniture making—he took at RISD. He goes on to say that this background—the emphasis on balance, proportion, materials and composition—has always informed his work.

“A home is not just shelter from the weather or security from the outside world,” he says. “A work of architecture should enhance the human spirit—and create a retreat where people can refresh, re-nourish and be rejuvenated so they can go out and do good things in the world.”

Founder of Charles Cunniffe Architects in 1981.

HONORS
Fellow of the American Institute of Architects AIA Colorado West Firm of the Year
Mountain Living Home of the Year 2017, 2012, 2007 and 2002

ACCOLADES
CCA has been on Outside magazine’s Best Places to Work list for five consecutive years.