Prior to her decision to pursue a degree in architecture, Candace Tillotson-Miller’s life read more like a segment from a Western novel than a chapter in the life of a wannabe architect. Starting in her late teens she spent several summers working in her father’s gold mines in the Yukon, where under his tutelage—he was also a contractor—she learned to repurpose materials found in deserted mining camps into temporary shelters. Along with that came a crash course in the proper siting of buildings. “We would always quibble about where to place the cabins for framing views, proximity to a stream, capturing the sun or how to get out of the wind,” she recalls. 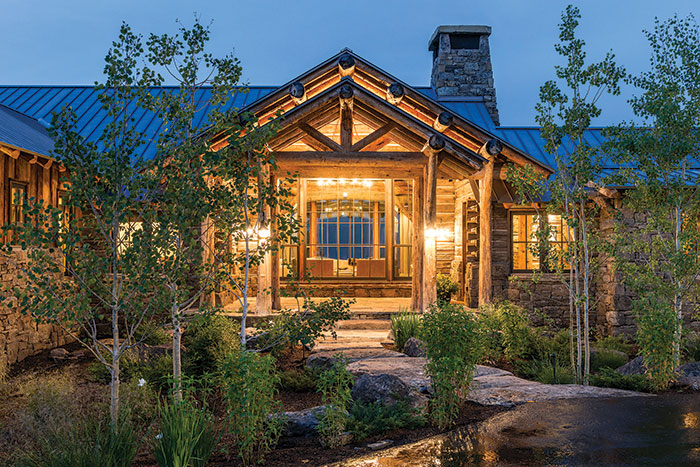 Large slab stepping stones leading to the main entry of this Big Sky, Montana, home are surrounded by gardens. As guests approach the porch landing their attention is drawn through the living room to an epic view of mountains beyond. Photo by Audrey Hall.

With the romance and beauty of indigenous materials forever imprinted on her soul, Tillotson-Miller moved to Montana, where she completed her advanced degree and eventually opened her own shop in 1992. “I wanted to take on the responsibilities of an office and feel the creative juices flow,” she says.

"To me, architecture on the Western landscape has to respond to place more than anything."

And flow they did. Over the next 26 years Tillotson-Miller, who had also lived and studied on the East Coast, combined her love of classic New England forms with her life lessons in the Yukon to craft her own brand of Western design. Specializing in repurposing historic homestead barns and other reclaimed ranch buildings, her building blocks were 100-year-old beams and local stone, and her muse, the ruggedness of the Western landscape.

To this day the sight of a building engaged with its surroundings that is done right still thrills her. “It’s not just architecture, it’s a combination of landscape, built form design and finish landscaping— the layers that give a building depth,” she says. “To me architecture on the Western landscape has to respond to place more than anything, and how it engages with the site is paramount to making a successful project.”

Founded Miller-Roodell Architects in 1992; today the firm has a staff of 15 at its Bozeman office in the Cannery.

RANCH LIFE
Tillotson-Miller runs a cattle ranch with her veterinarian husband outside White Sulphur Springs, Montana, on the edge of the Belt Mountains.

EARLY OFFICE
Tillotson-Miller repurposed one of the ranch outbuildings as an office for five people and a location to meet with clients—with a large window overlooking the calving pasture allowing her to oversee the cows from her desk.

STARTING OUT
Shortly after starting her business, Tillotson-Miller was introduced to Michael Keaton and awarded to design his home in Big Timber.

Designing a Custom Rug: Here’s What to Expect