This Wyoming Home Tells the Tale of Two Styles

As rugged as the Bighorn Mountains and as comfy as a well-worn saddle, this Wyoming home is a little bit Western, a little bit Eastern. Rustic—but with a certain spit and polish, too.

Built on a multi-acre property in Sheridan dubbed Big Goose Ranch, the 3,000-square-foot, three-bedroom, three-bath home was designed to feel as much a part of the landscape as the adjacent cottonwoods and hawthorns.

“It’s a phenomenal property with an existing historical barn that has great skeletal bones,” says architect Kipp Halvorsen. His Bozeman, Montana, based firm, Faure Halvorsen Architects, specializes in creating rustic, cabin-inspired houses that blend seamlessly into their natural settings. “My thought in designing this house was to embrace that history, embellish it, and make the house feel like it’s been there forever. I wanted to tuck it into the surrounding scene, so it felt appropriate.”

Halvorsen’s other goal was to make a home that worked for the couple who lives there. Though both feel more at home in dusty saddles than in fancy armchairs, he is a Westerner through and through, whereas she originally hails from the East. “They’re both always outside,” says Halvorsen, “whether doing chores or something else.” The home, with its continuous views, suits them both perfectly. “Every window has a great view of the outdoors,” says the wife, with the property a regular rest stop for elk and white-tailed or mule deer.

he builder, Shaun Ryan of Livingston-based Battle Ridge Construction, incorporated vintage-inspired materials like aged barnwood, hand-hewn timbers, recycled ceiling boards, and beadboard applied both vertically on walls and horizontally on ceilings. Even the accessories, such as the two wood-and-wire chandeliers in the great room, were sourced from a New England lighting company that specializes in historic designs. Under the guidance of project manager Russell Drost, the Battle Ridge team of Monte Zindler and Neal Greathouse took a truckload of lodgepole pine logs and soft-peeled, scribed and hand-built them into everything from handrails to great-room floor joists to porches. To achieve a historic look on the exterior, the home was clad in eco-friendly Montana ghost wood, a type of standing timber reclaimed from beetle- and fire-kill forests in the West.

Eschewing a decorator, the homeowners adorned the house with items they’d collected “here and there” over the years, including old Native American tapestries and rugs, leather club chairs, a drafting table, dressers, an old sideboard and leather chaps. “All of the furnishings are from family or antique and secondhand stores—whatever we liked or fit us,” says the wife. “We do not spend much time shopping around and we are not antique collectors, but we like original.”

Nothing fussy—just comfortable and friendly, like the home itself: 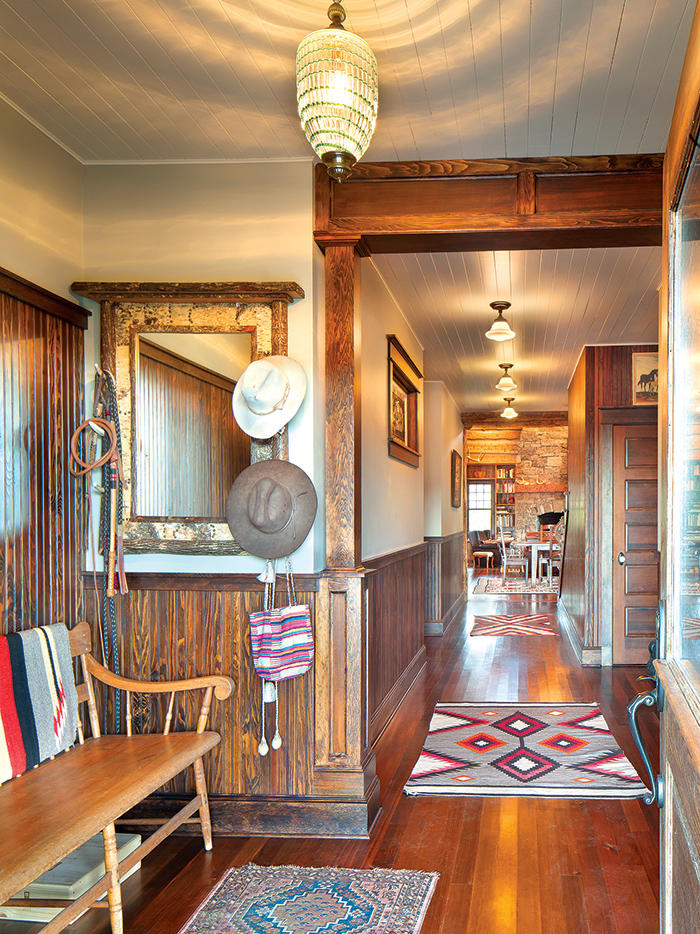 A circa-1920s chandelier, found at Turned Antiques in Banner, Wyoming, and new retro-look schoolhouse lamps light up the plank ceilings of the entryway. Old rugs, including Native American pieces, add warmth to the fir floors.

The two-story fireplace—which has a sandstone veneer—anchors the great room in the “lodge” section. All of the built-ins, including the bookcase, are made of oak salvaged from an old barn in Missouri.

High timbered ceilings give the great room an expansive feel.

“Since it’s just the two of them, they wanted a little breakfast nook where they could watch critters outside,” says Halvorsen.

A second-floor opening that overlooks the great room is framed by lodgepole pines and hand-hewn siding. 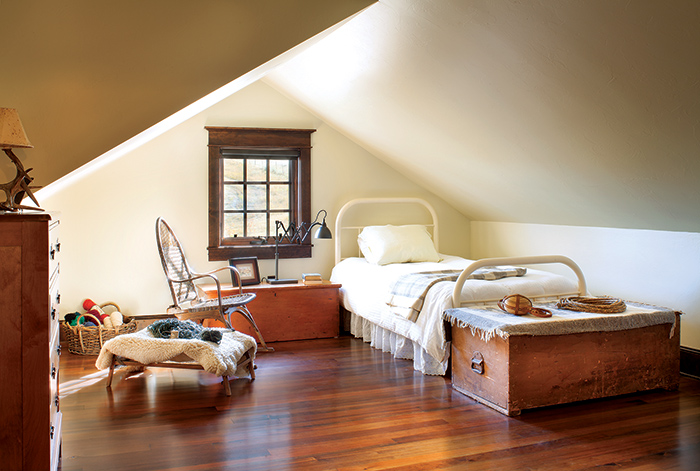 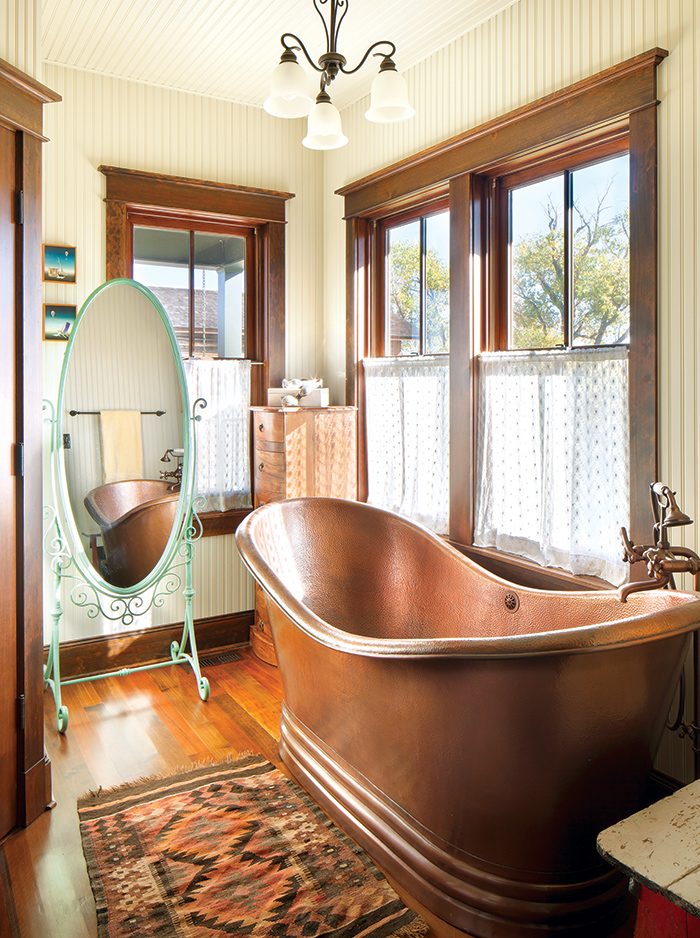 The master bath—which manages to feel both open to the outdoors and private—features a deep copper tub from Signature Hardware; the walls and ceiling are painted in Pale Lichen by Sherwin-Williams.

TIPS FOR CREATING A RUSTIC LOOK

Step back in time
To get ideas for the Sheridan house, both Halvorsen and Ryan visited the numerous preserved buildings at the Big Horn County Historical Museum in Hardin, Montana. “It’s like doing a historical study,” says Ryan. “When we walked through the museum, we picked out a lot of little details—window pediments, exterior trim, crown moldings, tall baseboards—very traditional to the turn of the last century—that we thought would look really nice on this home.”

Get your proportions right
Although large, grand windows are all the rage these days, Halvorsen chose smaller paned windows more appropriate to an old homestead. “Back in the old days, people were limited by the size of glass they could produce,” he says. “That’s the feeling we were going for.” Similarly, he says, the steep ceilings in the upstairs bedrooms mimic those in old farmhouses, where people typically slept on the second floor.