This cozy mountain home reflects the beauty of the Rockies while also being modern, light, and airy

On Charlene Petersen’s first trip to Big Sky, Montana, she was captivated by the mountains. “I fell in love with the amazing skiing and views,” the owner and principal of Cashmere Interior Design Studio says of the Yellowstone Club. She and her husband were inspired to build a home that reflects the rugged beauty of the Rockies while also being modern, light and airy.

Collaborating with Steve Gordon of Bozeman-based Locati Architects, Petersen’s goal was to position the house so that the moment guests come through the front door, they see through massive windows to views of the 11,166-foot summit of Lone Peak. “The site is very challenging, but we were able to turn the house to take advantage of some pretty spectacular views,” Gordon says. “You can also see the Spanish Peaks from there.” The home’s simple entryway is deceptive. “It looks cozy from the front, so you don’t realize how big it actually is,” the architect  says of the 8,000-square-foot residence, which has six bedrooms, and spacious living areas on both the main floor and the ski-in, ski-out lower level.

The designer aimed to create a feeling of “rustic Zen,” not in the strictly Buddhist sense, but referring to a state of mindfulness and appreciation of nature. “Vacation homes, particularly in the mountains, should bring on a feeling of calm and comfort. You want to sink into a sofa and have a place to take a nap or read a book,” Petersen says. “If I had to put a color to Zen, it would be a neutral palette: white, ivory, beige, black and gray.” Against that backdrop, Petersen injected bold patterns in textiles, flooring and wall coverings. She also gave the project a European accent by incorporating Danish elements in lighting and furnishings in homage to her husband, Michael Lund Petersen, who grew up in Denmark.

Generously scaled furniture—the great room includes a 15-foot Verellen sectional sofa piled with accent pillows and a deep window seat that runs the length of the room’s massive windows—offers ample space for guests to gather. “You never go to these places by yourself. It’s about sharing,” Petersen notes. “I wanted it to feel like a lounge where friends and family can hang out and enjoy the fire or wine.”

“If I had to put a color to Zen, it would be a neutral palette: white, ivory, beige, black and gray.” — Homeowner Charlene Petersen 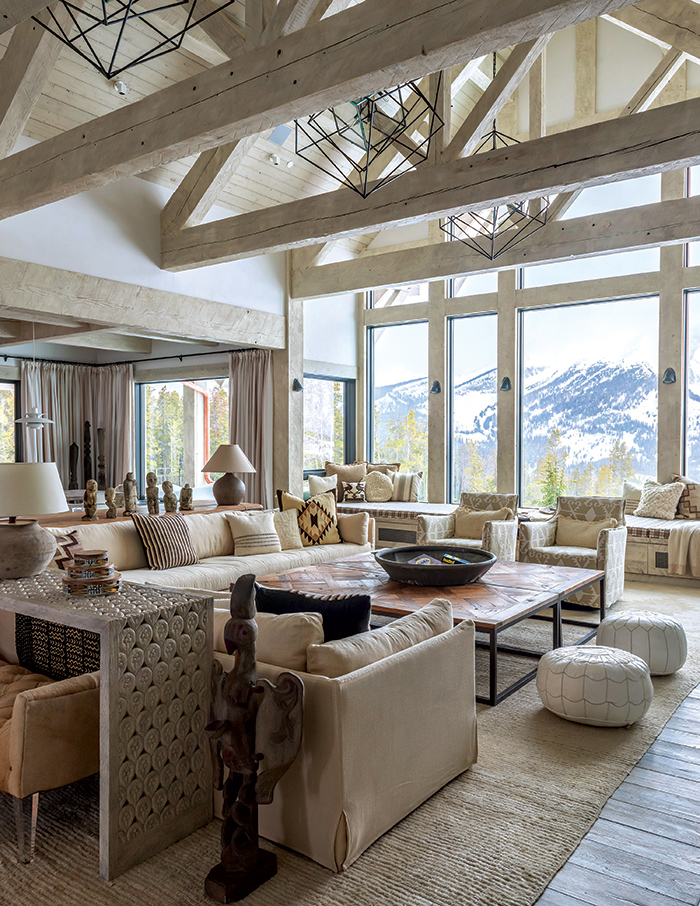 Wood floors throughout the home have a light-washed finish, as do the cabinetry, beams, trusses and ceiling, which soars to 20 feet in the great room. “The finishing process for the wood involved multiple steps, which took considerable effort by our painters,” says Damon Rao, a partner with the builder, the PRG Group. “Charlene had a vision and wasn’t going to settle for anything less.”

Accent furniture and accessories bring a worldly, collected feel to the home, including a hand-carved wood console table from Gregorius Pineo in the great room and antique Indonesian statues. “I like to marry the world,” Petersen says. 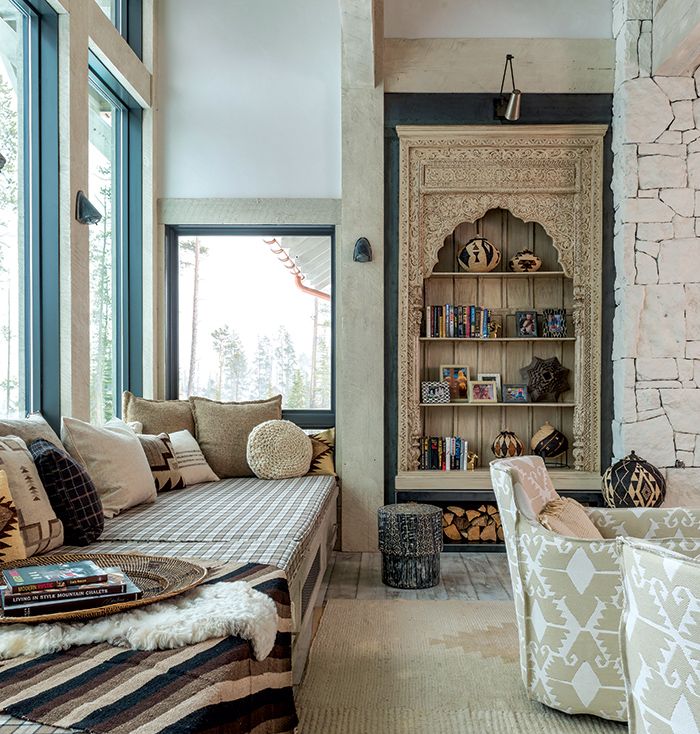 A deep, pillow-laden Verellen window seat runs the length of the great room, inviting guests to curl up with a book or gaze at the slopes outside. The bookshelf was custom created from antique parts by Asian Loft of High Point, N.C. 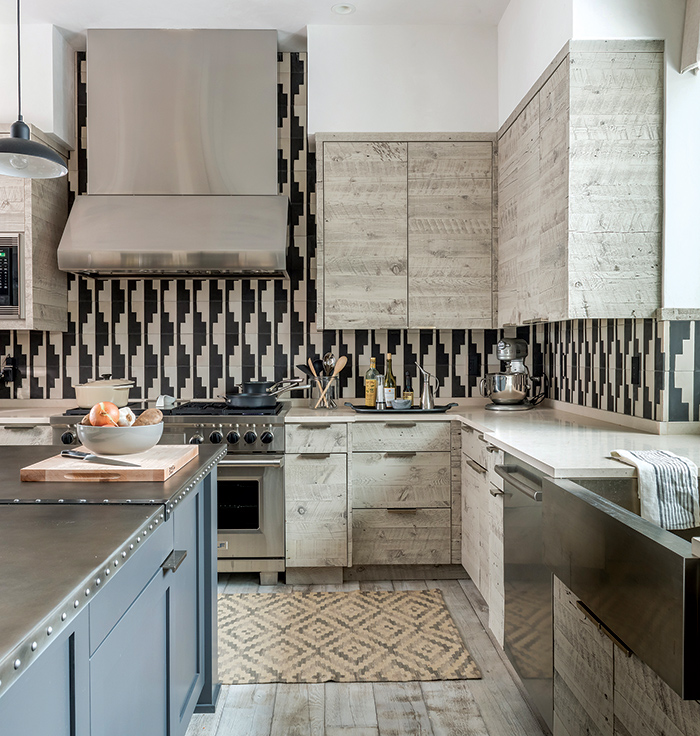 Bold tile in a Native American-inspired pattern from Exquisite Surfaces makes a splash against the gray-finished barnwood kitchen cabinetry, designed in a contemporary flat panel style. 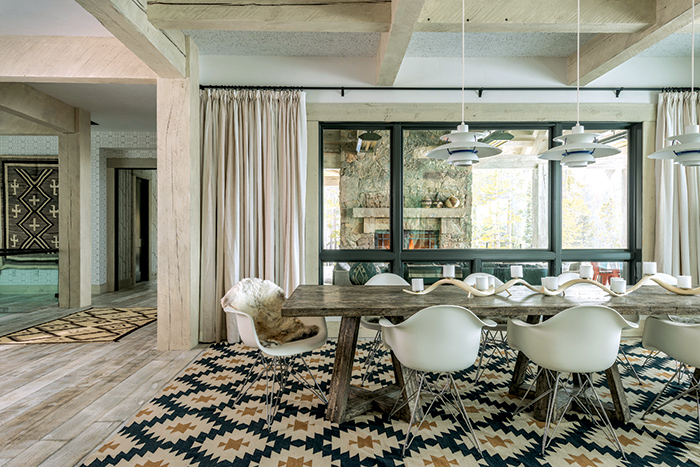 In the dining room, a Madeline Weinrib rug offers pattern play beneath a rustic gray-washed elm table from Club Cu. The classic molded Eames chairs are from Design Within Reach, as are the PH5 pendant lamps, one of many Danish modern touches used throughout the home. 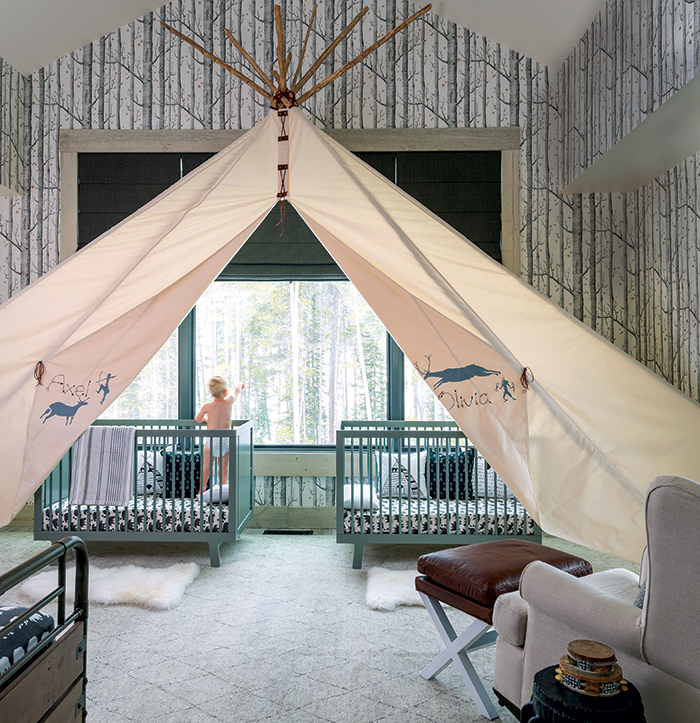 The homeowners’ two children, born 12 months apart, have matching Sparrow cribs in the nursery, where Cole & Son wallpaper from Kravet was chosen for its resemblance to trees in wintertime. The tepee is by Rusty Nail Design in Bozeman. The design team placed the nursery for the children opposite the master suite on the main level. When the children get older and move to their own bedrooms, the space can be turned into a junior master suite.

“Mountain homes all have very social spaces.  They are built for everyone to get together.” — Architect Steve Gordon 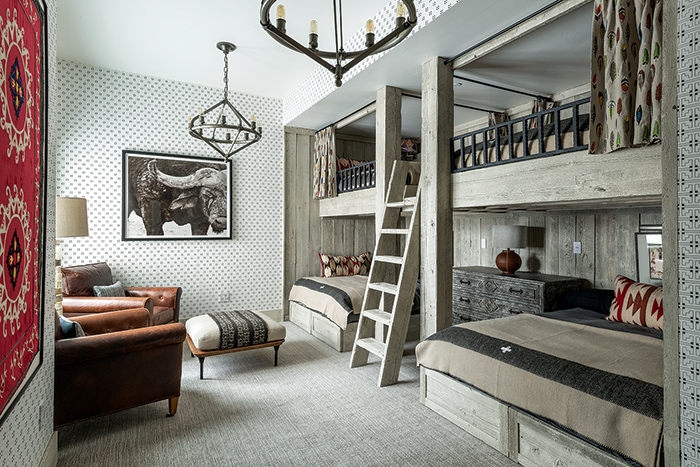 A similarly versatile thought process went into designing sleeping quarters in the lower-level bunkroom, which includes queen beds rather than standard single bunks, and Ralph Lauren metal chandeliers. A Guy Davis photograph provides a dramatic focal point. “It’s youthful but not juvenile,” Petersen says, adding that she wanted to be able to “max out” the space to accommodate many guests. 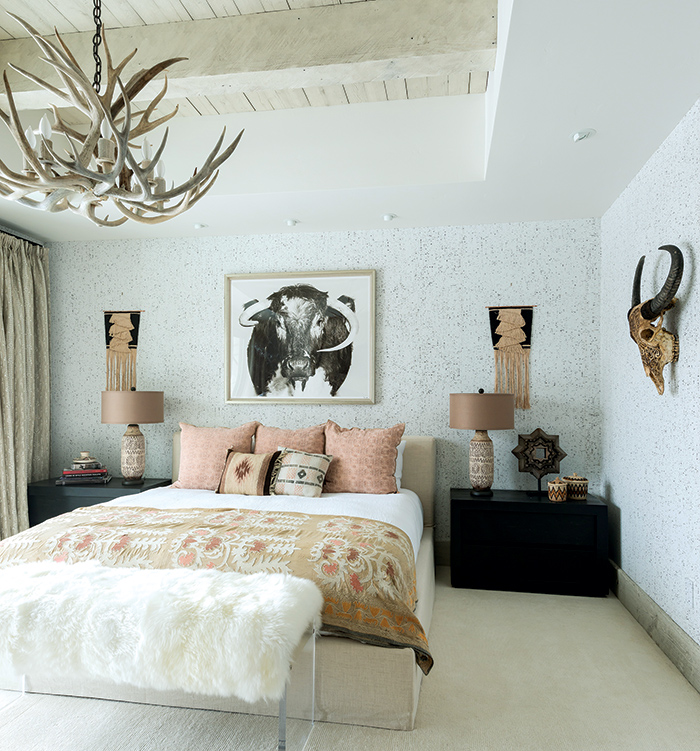 Shades of pale pink in pillows and an antique suzani add a feminine touch to a bed featuring Matteo Home linens. The ceiling and antler chandelier from Anthropologie are whitewashed, blending with a Phillip Jeffries wallpaper that mimics birchwood. A shaggy faux-shearling throw and weavings on the wall flanking the photograph by Ben Wood lend
Native American and Western accents. 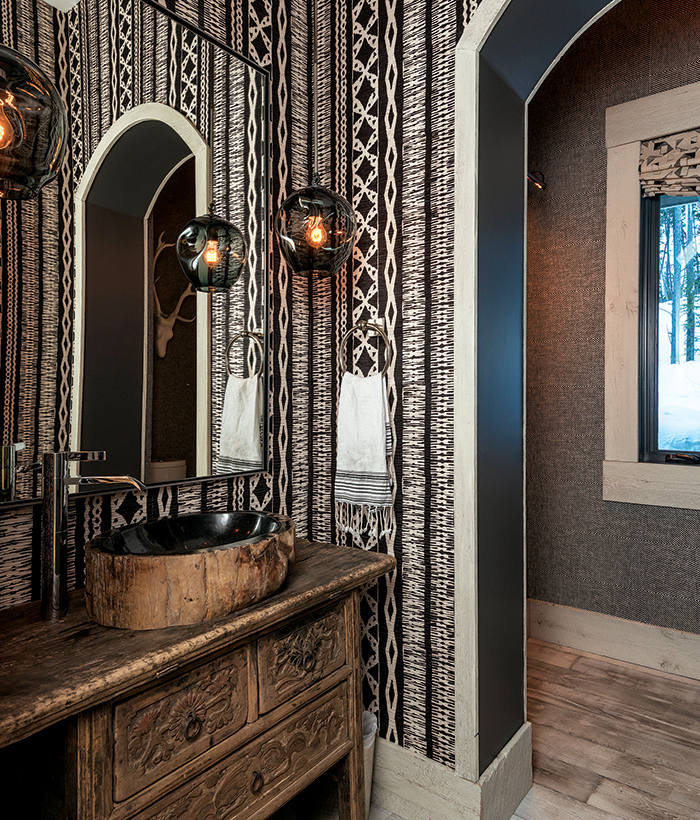 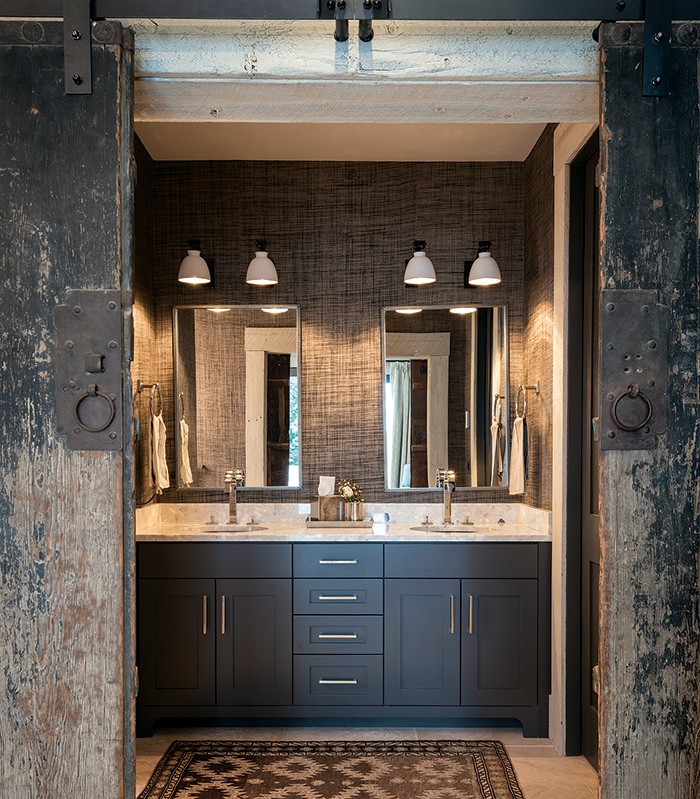 A bathroom features a sliding antique Chinese door from Club Cu, Phillip Jeffries wallpaper and a vanity with marble countertop.

Three additional bedrooms, an entertaining area, a bar and ski room stretch across the home’s lower living quarters. Perhaps the most used room in the home, the ski room blends function with style. Lockers line one wall, and an upholstered daybed allows skiers and boarders to sit as they strap on their boots and helmets. Then it’s out the door to explore the amazing mountain slopes that first inspired Peterson and her husband to build their Montana home.

Charlene Petersen of Cashmere Interior Design Studio is a fan of mixing patterns and proportions. She shares these tips for getting the bold look:

Pick a color scheme and stick to it. “I worked with five colors in this house: white, ivory, beige, black and gray. It won’t read as boring if you play with the patterns and the scale of the furnishings. I mixed them over and over again in fur, linen, wool and other materials.”

Strike a balance. “If one of the elements in a room is bold and geometric, balance it with something in a smaller scale or different texture.” The rug in the dining room has a strong Navajo-inspired pattern that’s offset by a rustic gray-washed elm table and Eames chairs.

Brush strokes. “Don’t be afraid to paint wood—and even stone,” which can add refinement to rustic surfaces. Painting the moss rock on the great room fireplace “was a little scary at first” but created a beautiful effect.

A Modern Mountain Masterpiece in Whitefish