At Home in a Historic Hotel

Pioneering spirit lives on in this Crested Butte vacation retreat

When a Dallas businessman was looking for a vacation home for his family in Crested Butte, Colorado, he was drawn to the older properties in the town’s historic district. He and his wife already owned a condominium at the nearby ski area, but they wanted to be able to walk to restaurants and have their grandchildren ride their bikes in town. What they didn’t imagine was that they would end up buying a six-bedroom, six-bath log residence that was built 135 years earlier as the Pioneer Apartment Hotel by Howard F. Smith and George C. Holt, the town’s founders. 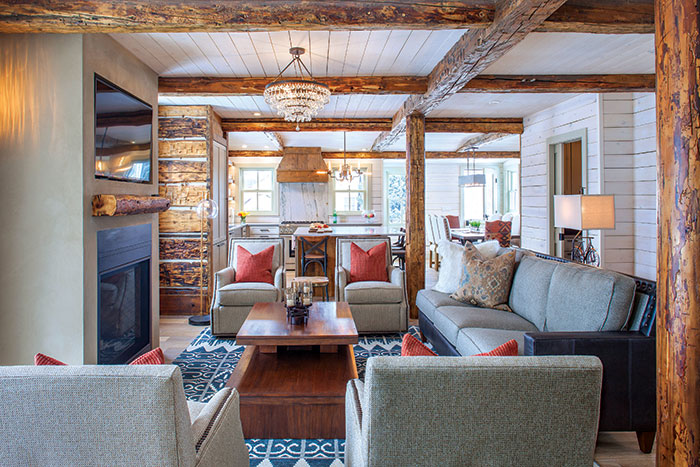 The living room with comfy seating by Mayo furniture; a Lexington coffee table

Perched on a hill on Sopris Avenue, the hotel originally housed workers at the town’s coal mine. When the building was gutted and rehabbed, among the artifacts found were glass bottles, old clothes and pay slips detailing a miner’s take-home of $42 for two weeks’ work. 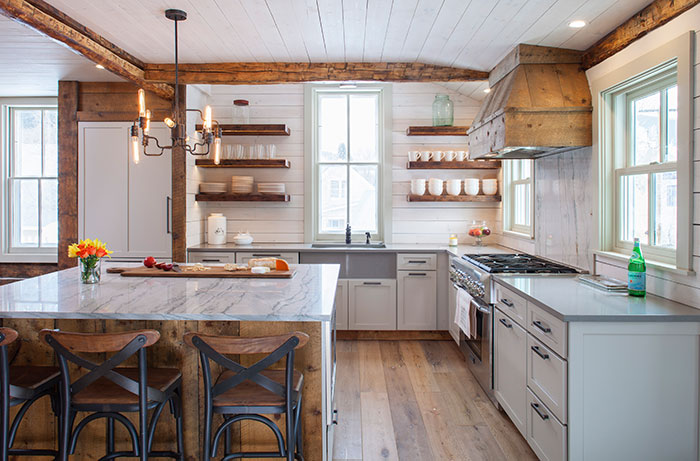 The spacious island is made of white Macaubas quartzite while quartz was used for the other countertops.

Builder Peter O’Rourke of Anthracite Builders had his work cut out for him in rehabbing the structure. For most of the 20th century the Spehar family lived in the home, and at two different times, the log structure was wrapped in siding. When O’Rourke and two investors in the project set out to restore the property after Betty Spehar’s death, they peeled back the layers and were pleased to find the structure in good shape. But to make the home viable for new owners, they needed to lift the structure up off its dirt foundation, pour concrete and build a lower-level living area, as well as completely gut and redesign the other two floors. 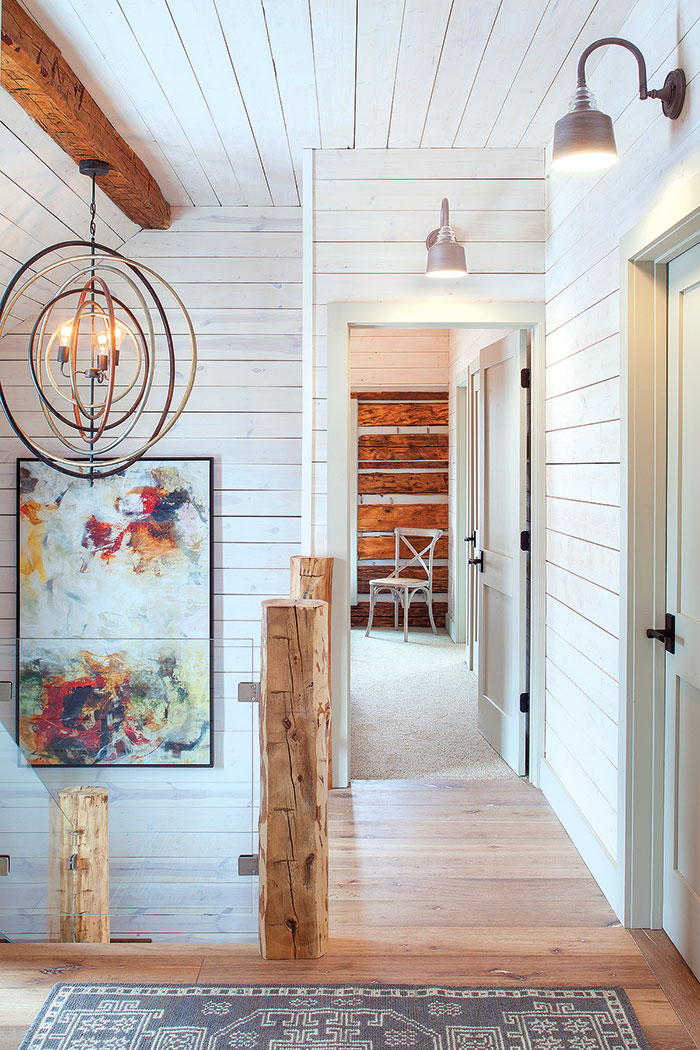 Now it’s a family-friendly residence with modern amenities that doesn’t forsake its heritage. The original perimeter log walls look much as they did in 1882, and new interior walls and ceilings are pine finished with a white glaze. Windows were removed, reglazed and reinstalled. Beams were reused, and elements like glass insulators and wooden pegs in the walls are other nods to the past. 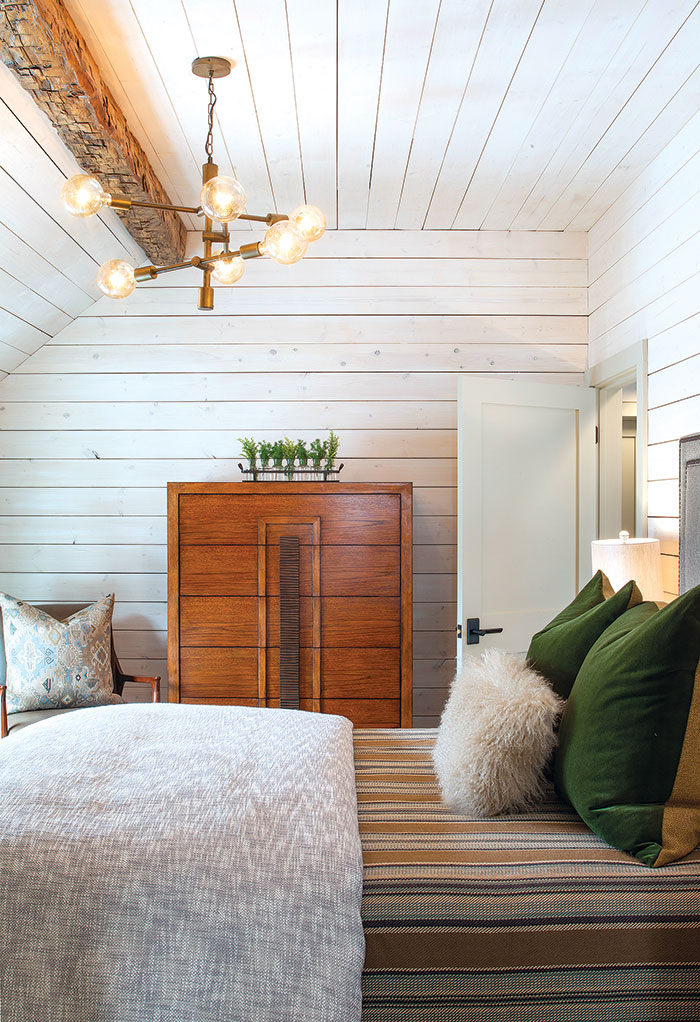 A Mayo upholstered bed with linens from Amity Home and Pinecone Hill. The tall dresser is by Lexington. White glazed walls throughout brighten and modernize the space while original logs and beams are a nod to the past.

Ready for family gatherings, the main floor’s open layout offers a clean flow from the seating area around the fireplace to the open kitchen, butler’s pantry, dining area and bar. The master bedroom is also on the main floor, while a junior master suite with fireplace was created on the second floor, which has two additional bedrooms. On the lower level, a family and theater room were built along with two bedrooms. 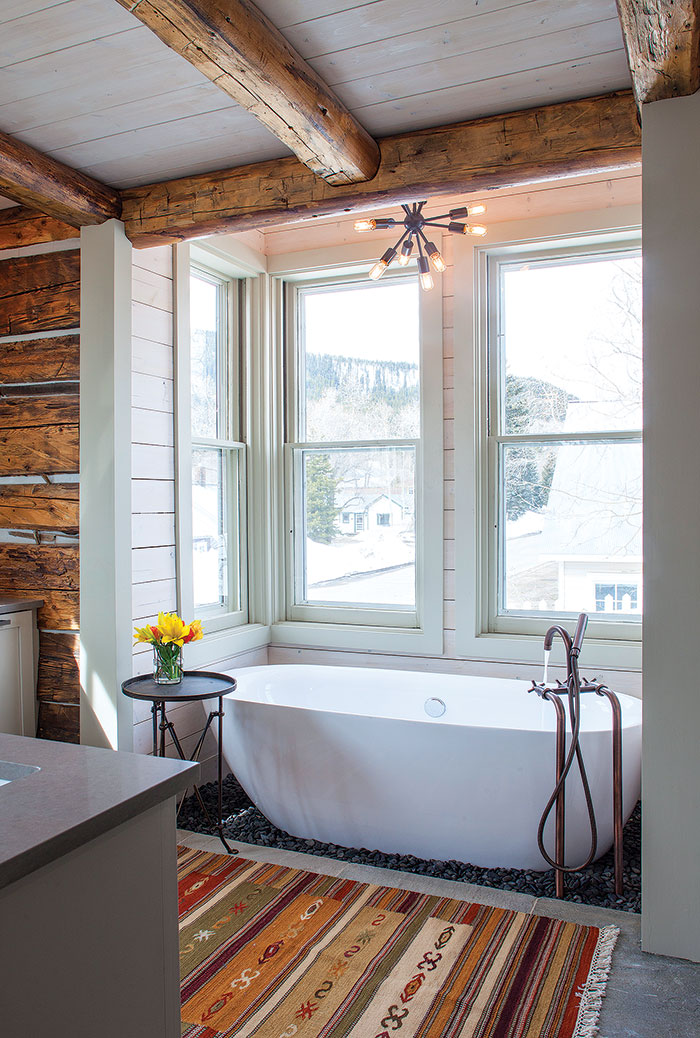 Designer Priscila Palhava of Studio West Interiors chose furnishings in neutral materials and repeated such features as quartz countertops and tile in the bathrooms so the home would “have the feel of a lodge and not be a patchwork of elements,” she says.

Teri O’Rourke, who detailed the construction process in a blog, says she and her husband never tire of turning historic properties into modern homes. “We love the process because you know what you want it to look like and you’ve seen all the nooks and crannies of what it used to be. You see the house come alive again.” 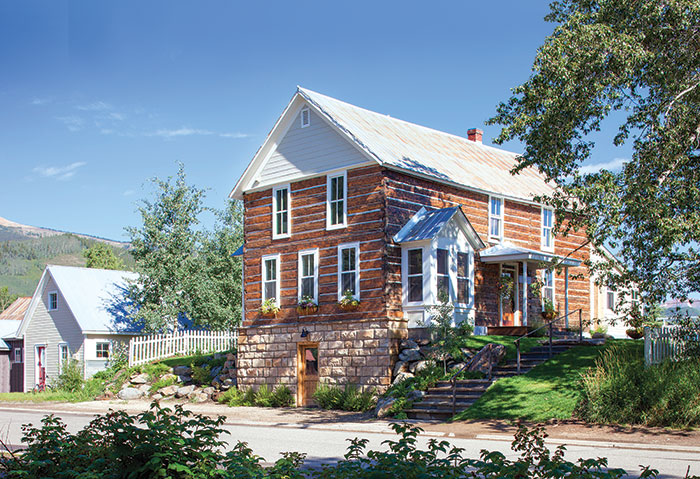 The 1881 log residence in Crested Butte’s historic district was restored and expanded to create a modern retreat for a Texas family.