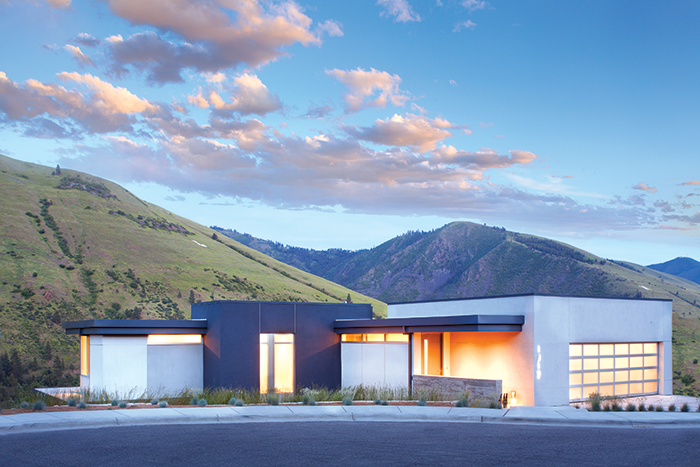 The site seemed unbuildable—but its new owners longed for its faraway views. It was a leftover lot on a cul de sac in Missoula, Montana. Steeply sloped at about 30 degrees, its bedrock base was covered in up to 10 feet of loose fill dirt from road construction. It had already changed hands a few times, as others abandoned the idea of building a conventional home there.

The local couple bought it, after living below in Rattlesnake Valley for 30 years. Newly retired from running a commercial construction firm, they wanted a home on the edge of the valley—and all its vistas.

They hired a soil engineer and a structural engineer and then contacted Carl Posewitz and Matt Duguid of Paradigm v2 Architects. “Carl saw the design purpose of the house as primarily the views,” the husband says. “You look across the valley that’s 300 feet down, and a half-mile across to Mount Jumbo. Basically you’re looking across the universe of Montana.”

Posewitz huddled with the engineers, listened to his clients, and studied the site. “I said that what we would do is let the lot tell us what it wanted to do and design the house around that,” he says. 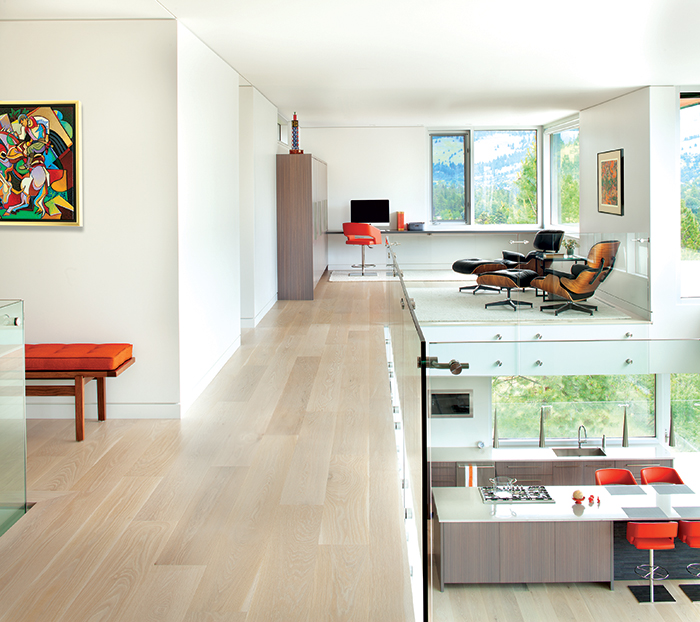 The top floor features a catwalk that overlooks the kitchen and living room, and leads to the wife’s office and a seating area furnished with two Eames chairs. Big fans of the arts, the homeowners created a place to take in the Montana scenery while displaying works from local artists Dana Boussard, George Gogas, Rudy Autio and Trey Hill. The result is a space that’s a small museum as well as a home.

It had much to say. For starters, the entry would be at the top level. And it would be built atop four concrete “fins,” poured into excavated bedrock beneath the fill dirt. “The house essentially floats on that bedrock, and with a seismic event the loose material slides away and the house stays in place,” the architect says.

The resulting home is 2,700 square feet, an open plan on two levels. The top floor houses garage and entry, with a bridge leading to a catwalk flanked by the wife’s office and the husband’s painting studio where he devotes much of his time. Below are living and dining areas, kitchen and master suite.

Inside, the number of doors was limited to two. “We decided to make it a one-bedroom house—not a company kind of house,” the homeowner explains. “We took all the walls out and opened it up, so it’s sort of a 60-year-old’s bachelor pad—for a couple.” 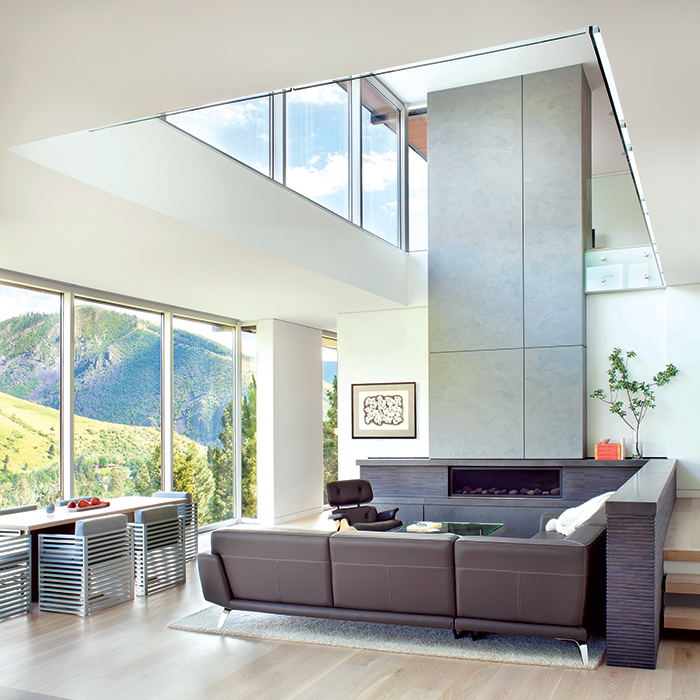 The owners can enjoy the living room’s view of the valley and Mount Jumbo beyond from a Roche Bobois sofa, discovered on exploratory buying trips to Portland and Seattle.

The couple wanted to carefully curate the art and furnishings, so they traveled to Portland and Seattle, seeking key pieces like their Roche Dobois sofa, while selecting two Eames chairs from Design Within Reach. “Everything else we found locally,” she says. That means modern works by local artists—like ceramicists Rudy Autio and Trey Hill, and painter George Gogas.

The couple splits their time between Montana and travels south in winter. She calls their Missoula home a “lock and leave” house, because it’s basically impenetrable. “If we’re not around, there’s not a window you can break into—it’s kind of a little fortress,” her husband says. 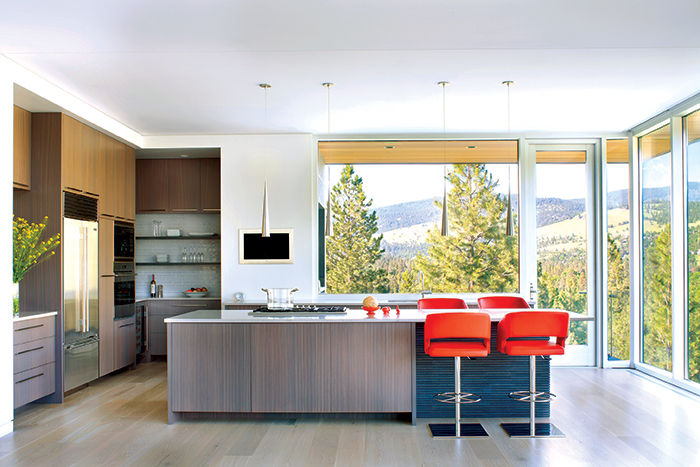 But when they’re home, it’s a delight, inside and out. “The key is an extremely minimalistic selection of color and materials that form a canvas for the scenery outside, and a roving display of artwork inside,” Posewitz says.

That’s partly because of the couple’s background in modern construction methods. “It’s not a traditional home, but like a commercial building—a lot of concrete and glass, so it was familiar ground for both of us,” the husband says. “We were just crazy enough to give it a try.” 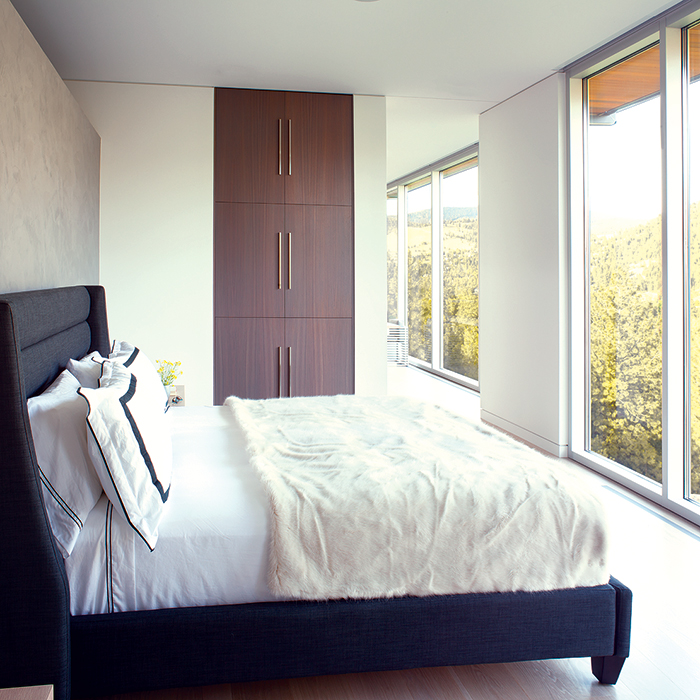 Posewitz designed the couple’s home with a single bedroom overlooking the valley. 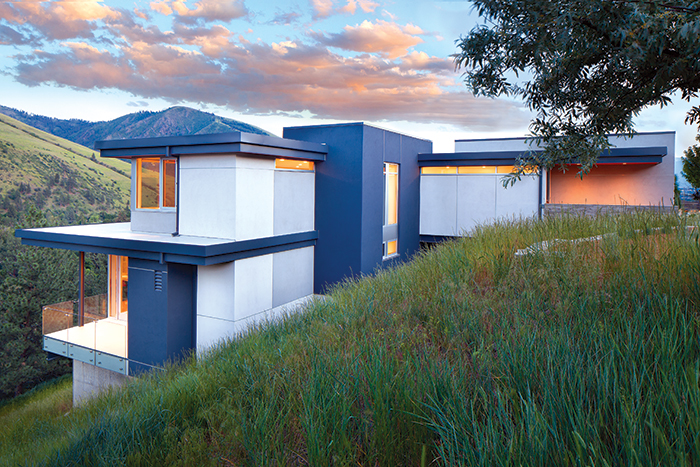 The entrance to the home, which rests on concrete fins tied into the bedrock of the mountain slope, is on the top floor. With the home’s steep grade, by the time the owners reach the far side of the house, the slope drops 24 feet.

STEEP SLOPES:
How to build on a mountaintop

Building a home on a 30-degree slope might be difficult, but it’s not impossible. Smart property owners will first assemble a team—and then make sure everyone’s on the same page.
There’s a checklist to review too, says Travis Kukay, structural engineer at Access.

A Modern Mountain Masterpiece in Whitefish