An Elegant and Rustic Montana Home 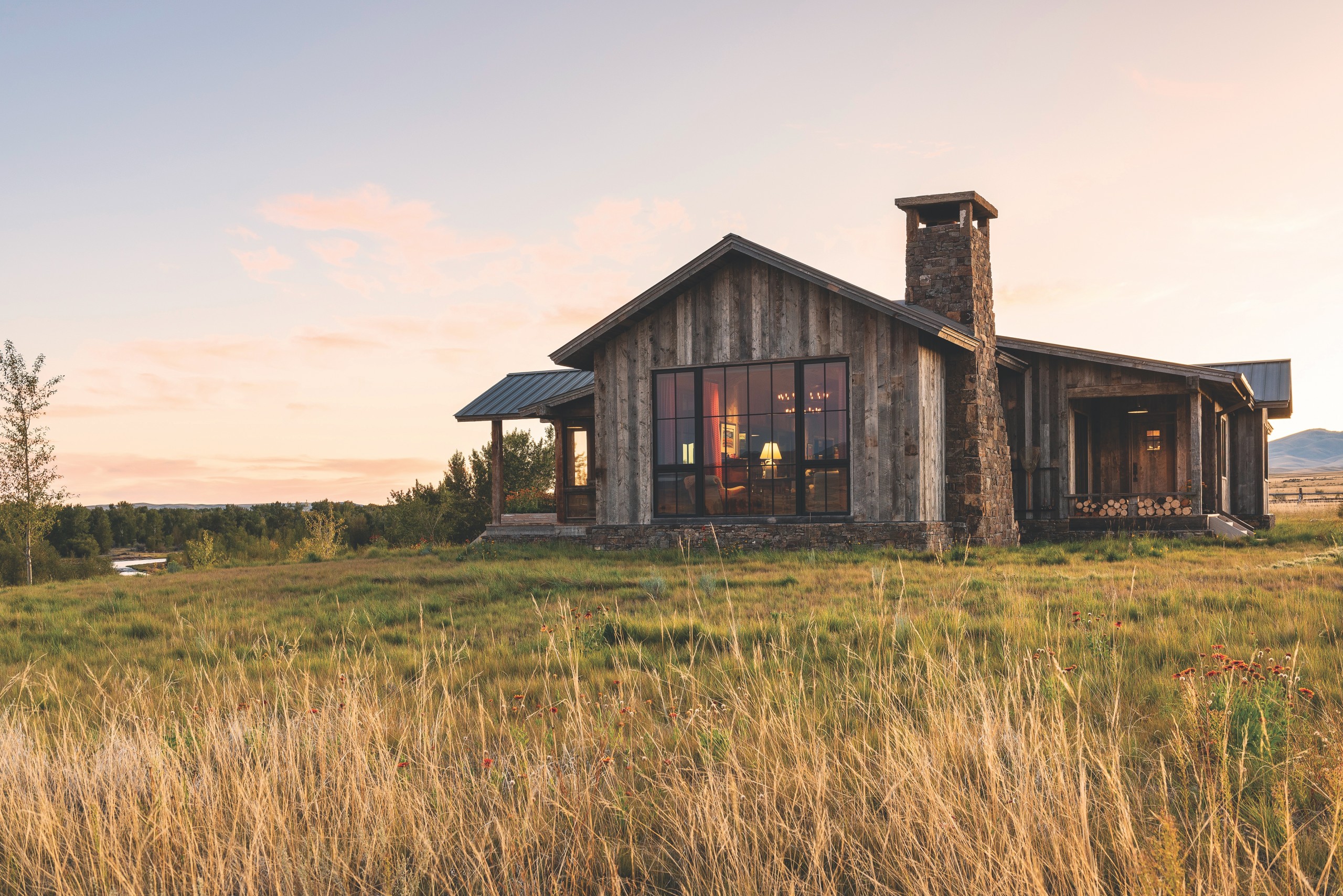 Designed to minimally impact the natural landscape and appeal to fly-fishers floating down the Big Hole River, the simple ranch house is clad with planks reclaimed from old structures in the area and accented with metal roofing and black windows. | Photos by Lucy Call

Before David James and Brooke Herter James decided to build a house on 15 acres surrounded by ranch land near Twin Bridges, Montana, they spent two summers living there in an Airstream named “Rosie.”

“When it came time to build a house, we had a very good understanding of where the wind came from, the light and the heat of the summer afternoon. It made it very easy to imagine where to place the house,” Brooke says.

Desiring a larger spot for year-round visits by family and friends, who had previously pitched tents on the property, they decided to build on a bluff overlooking a dramatic oxbow in the Big Hole River. From their front porch, they can see deer, bald eagles, moose and the occasional fly-fishers in their drift boats.

The dynamic kilim pattern on the clients’ existing lounge chairs inspired the bold window treatments from Travers fabric in the living room, where a chandelier from RH takes advantage of the peaked ceiling.

“We wanted the house to look as if it belonged,” Brooke explains, noting they were conscious of how it would look to people floating down the river. 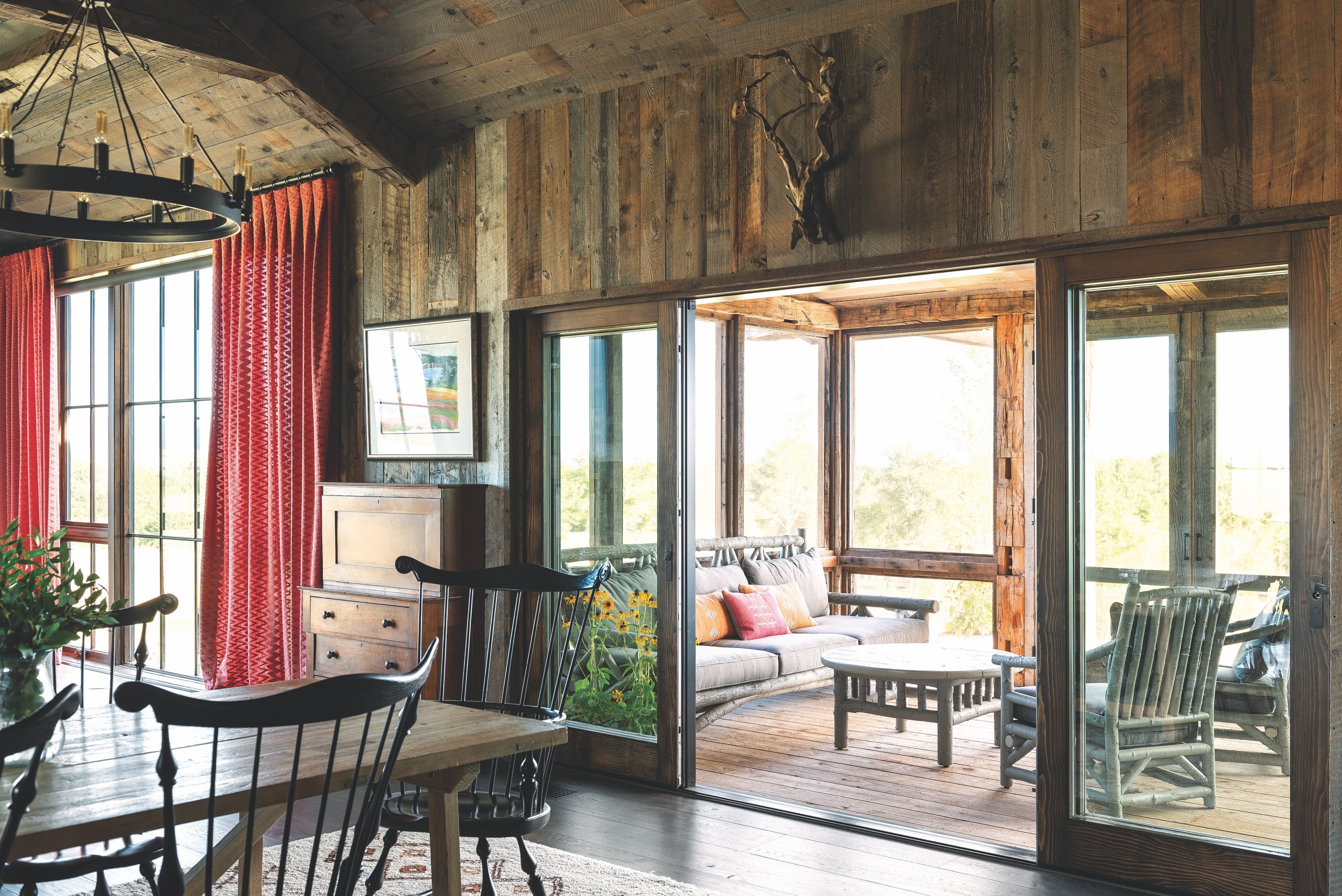 The bucolic Montana home’s lift-and-slide doors often stay open, creating a strong sense of connection between a furnished covered porch overlooking the Big Hole River and the open dining area, which is furnished with a French farm table surrounded by black dining chairs from O&G.

While the result speaks for itself, “working with reclaimed wood is a whole new dimension,” says builder Craig Taylor. “You don’t just grab a piece of wood off the pile. A lot of time and effort goes into picking out what piece of wood needs to go where.”

Black metal-clad windows and a standing-seam metal roof juxtapose the rough-hewn materials while maintaining the sense of simplicity the owners envisioned. “It’s not pretending to be something it’s not,” Miller says. “We were drawing from a simple agrarian farmhouse. It’s that straightforward representation of Montana.” 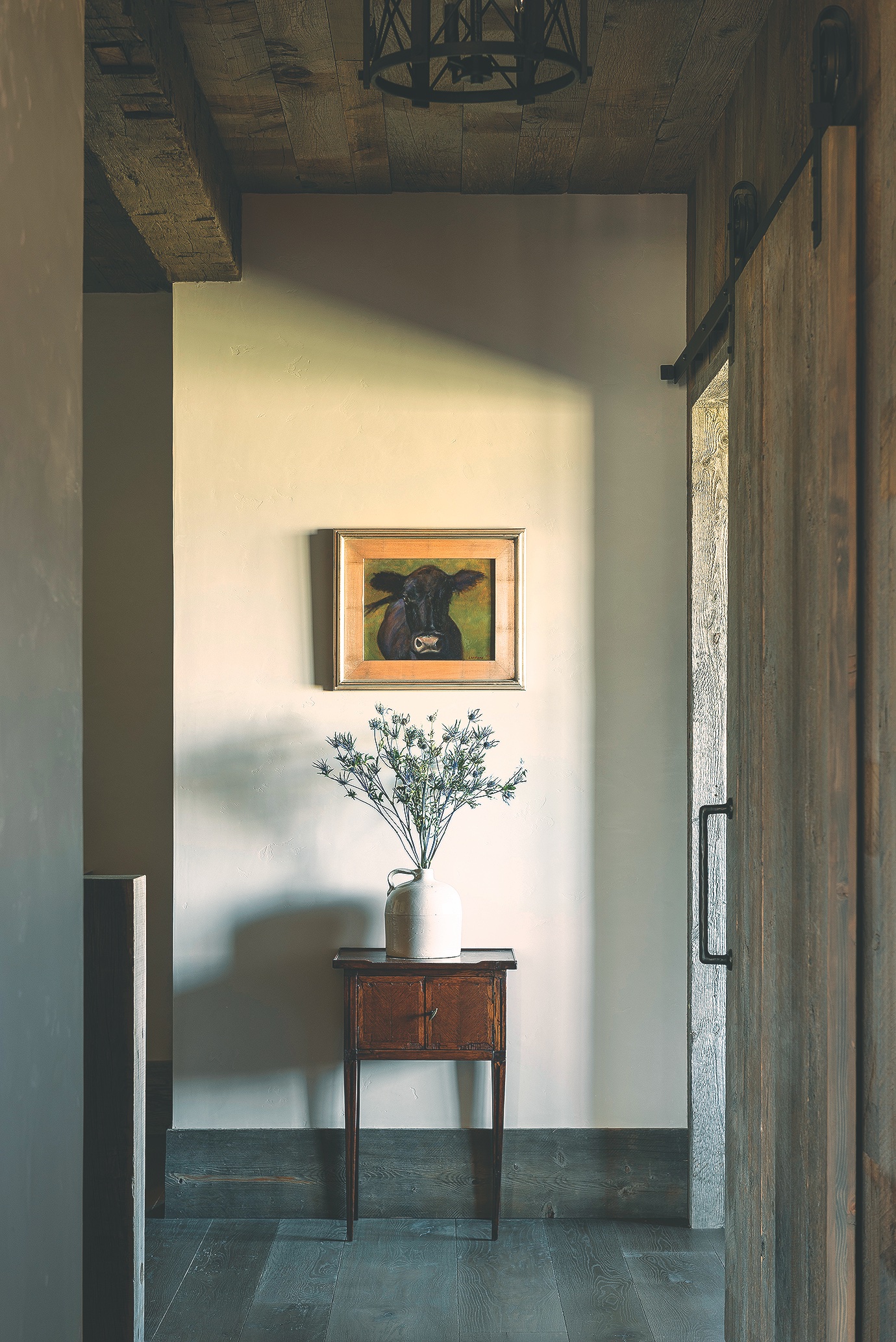 Interior designer Abby Hetherington incorporated many of her clients’ existing antiques, resulting in an East-meets-West vibe that perfectly suits their personalities.

On the other hand, interior designers Abby Hetherington and Alex Gilbertson incorporated many of the James’ existing furnishings—establishing an East-meets-West theme that appealed to the couple, who reside in Vermont for part of the year.

A pair of tufted chairs done in linen and vintage kilim rugs, for example, inspired the bold red embroidered draperies that frame the large windows in the living room. And a set of traditional black dining chairs contrast with a rustic dining table.

“Every room has a personal artifact, collection or piece of art that they wanted us to incorporate into the design,” Hetherington says. 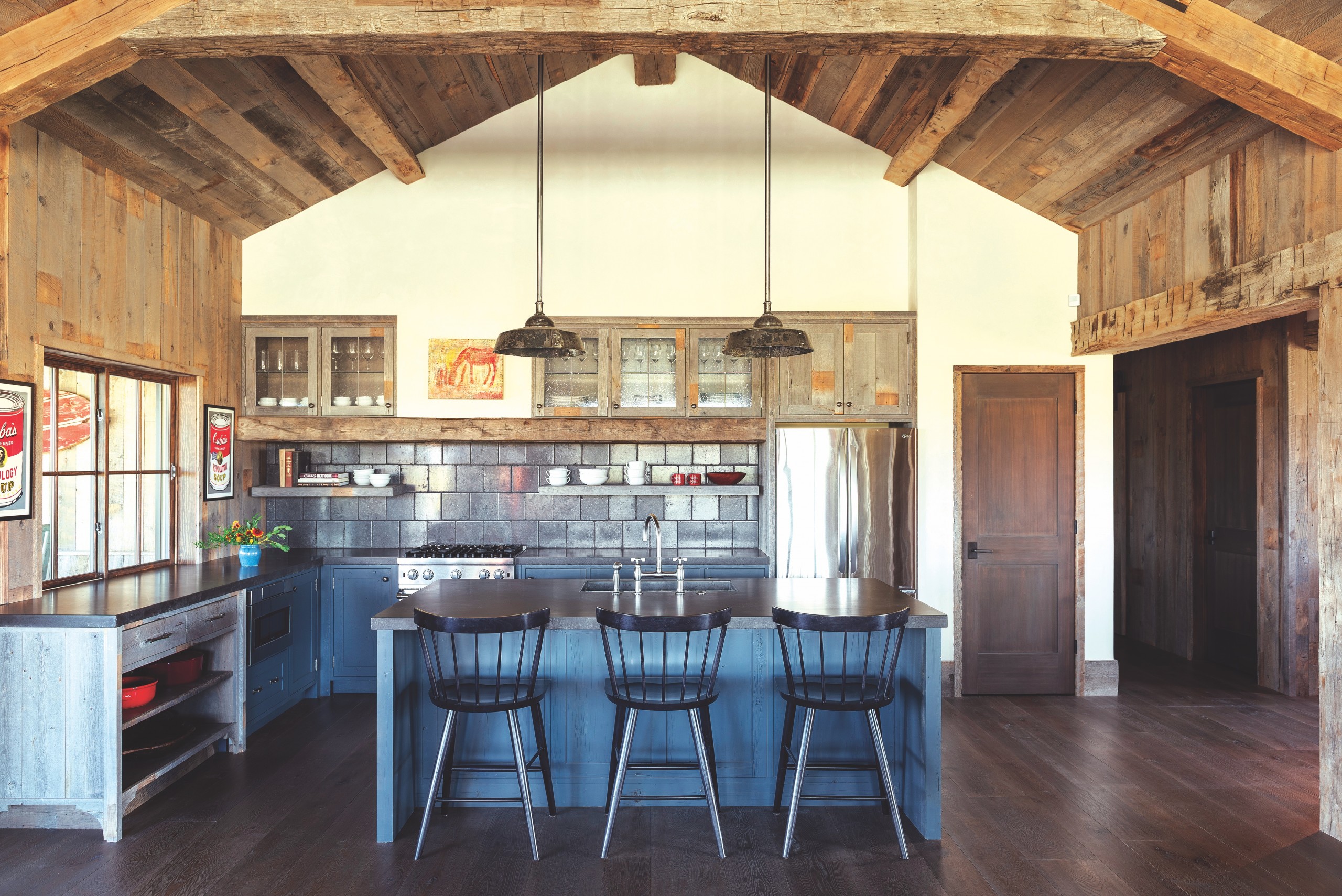 Pendants from Iron Glass Lighting in Bozeman illuminate the island in the open kitchen, which is outfitted with handsome cabinetry, concrete countertops and a 6-by-6-inch soapstone tile backsplash. The stools are from O&G.

To make the space feel less utilitarian, the designers concealed the hood. “It’s more intimate,” Hetherington says. A single cabinet made of reclaimed wood adds to the countrified ambience. 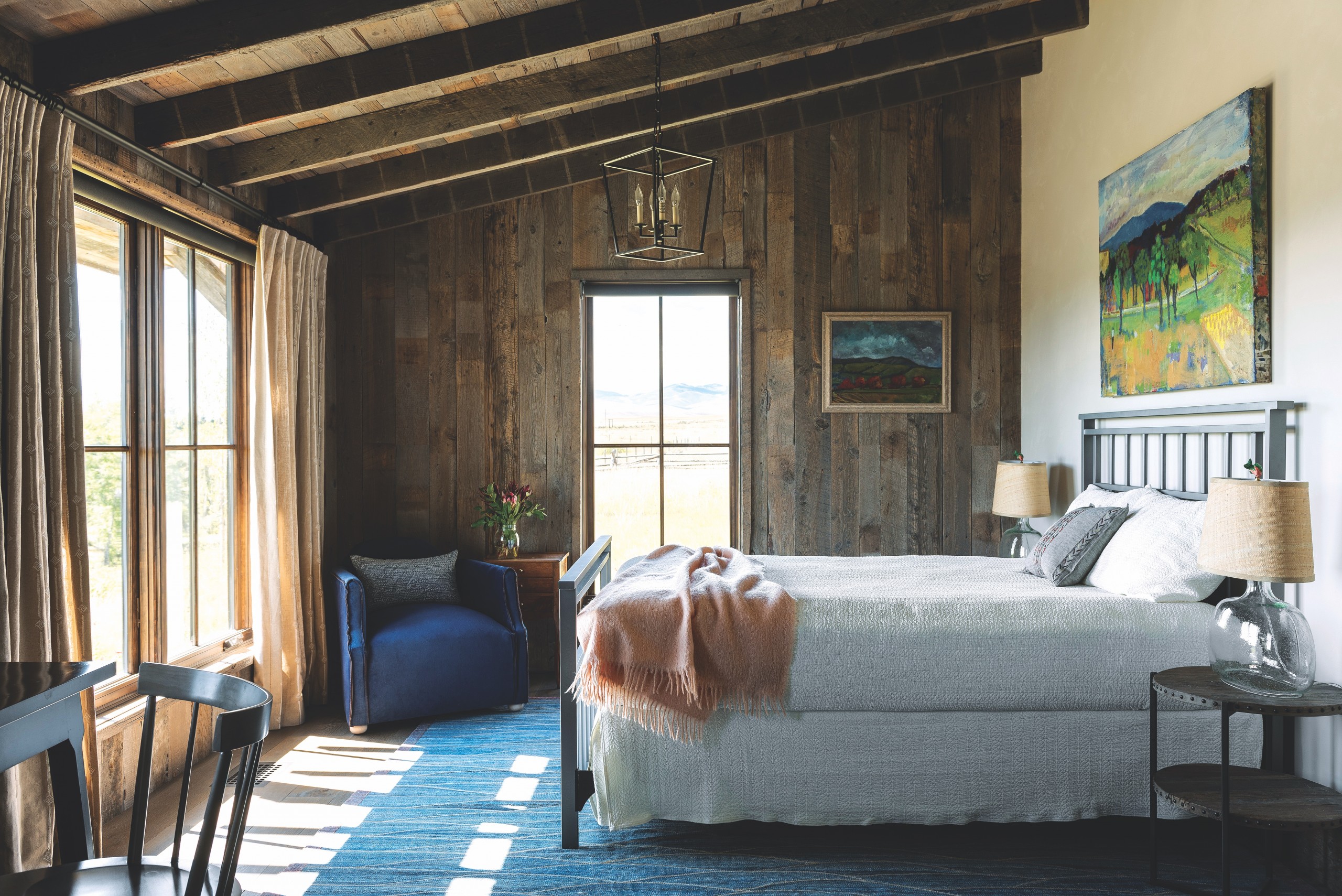 The blue accents flow into the owners’ bedroom in the form of artwork, a patterned rug from Eliko and a swivel chair and glider from Verellen. The bed is from Wesley Allen, and the lantern and table lamps are from Visual Comfort.

The blue hues likewise distinguish the primary suite, where a blue patterned rug anchors an iron bed and a complementary blue chair done in a reverse stitch that allows it to coexist with the more rustic pieces. “It’s meant to be a cabin, not a lodge,” she explains. “There’s a casual elegance.” 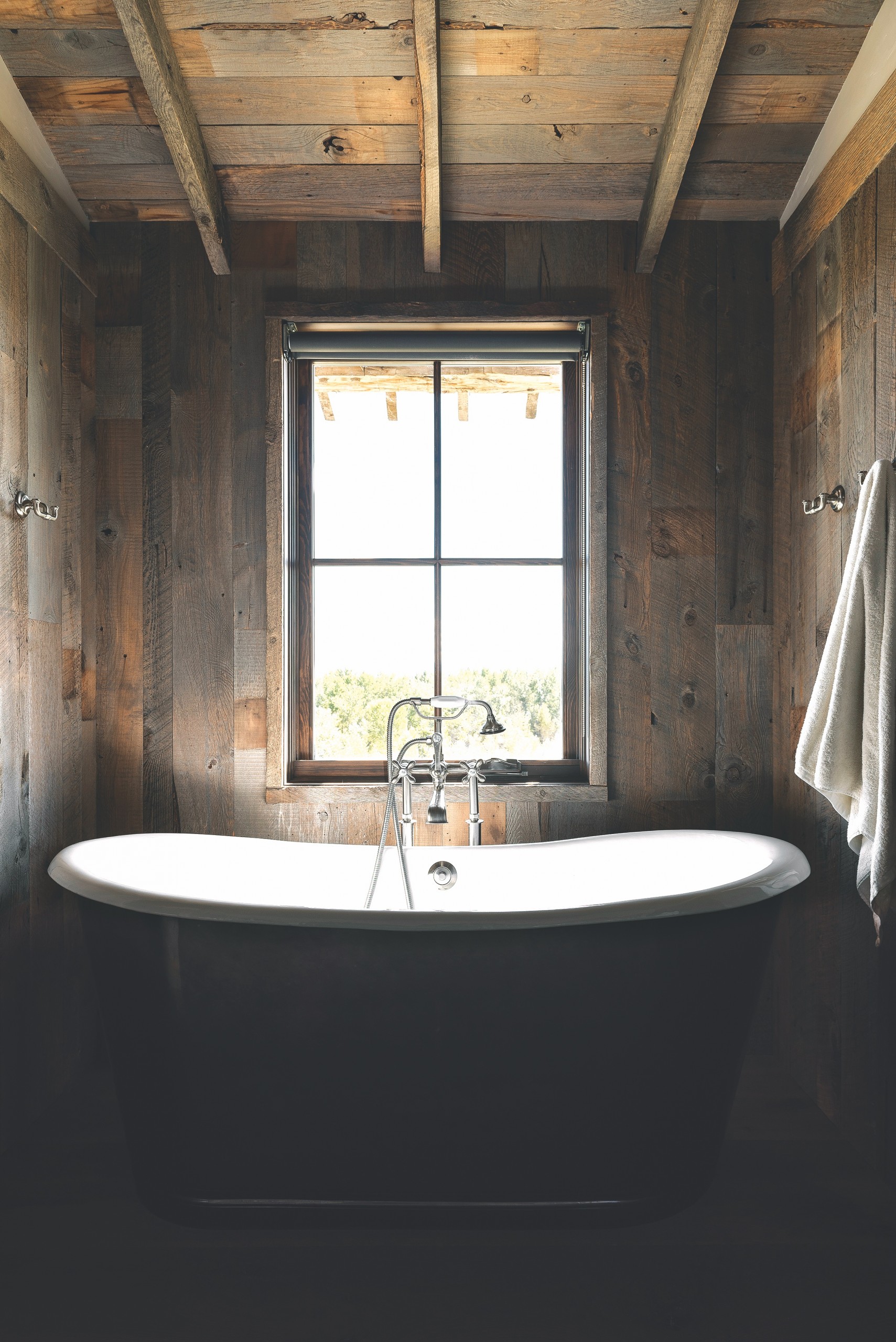 A deep clawfoot tub from Penhaglion occupies a cozy niche in the owners’ bathroom.

David and Brooke spend several months a year there, particularly enjoying the summer months, when they often leave open the lift-and-slide doors, creating a large indoor-outdoor area with the porch overlooking the river. 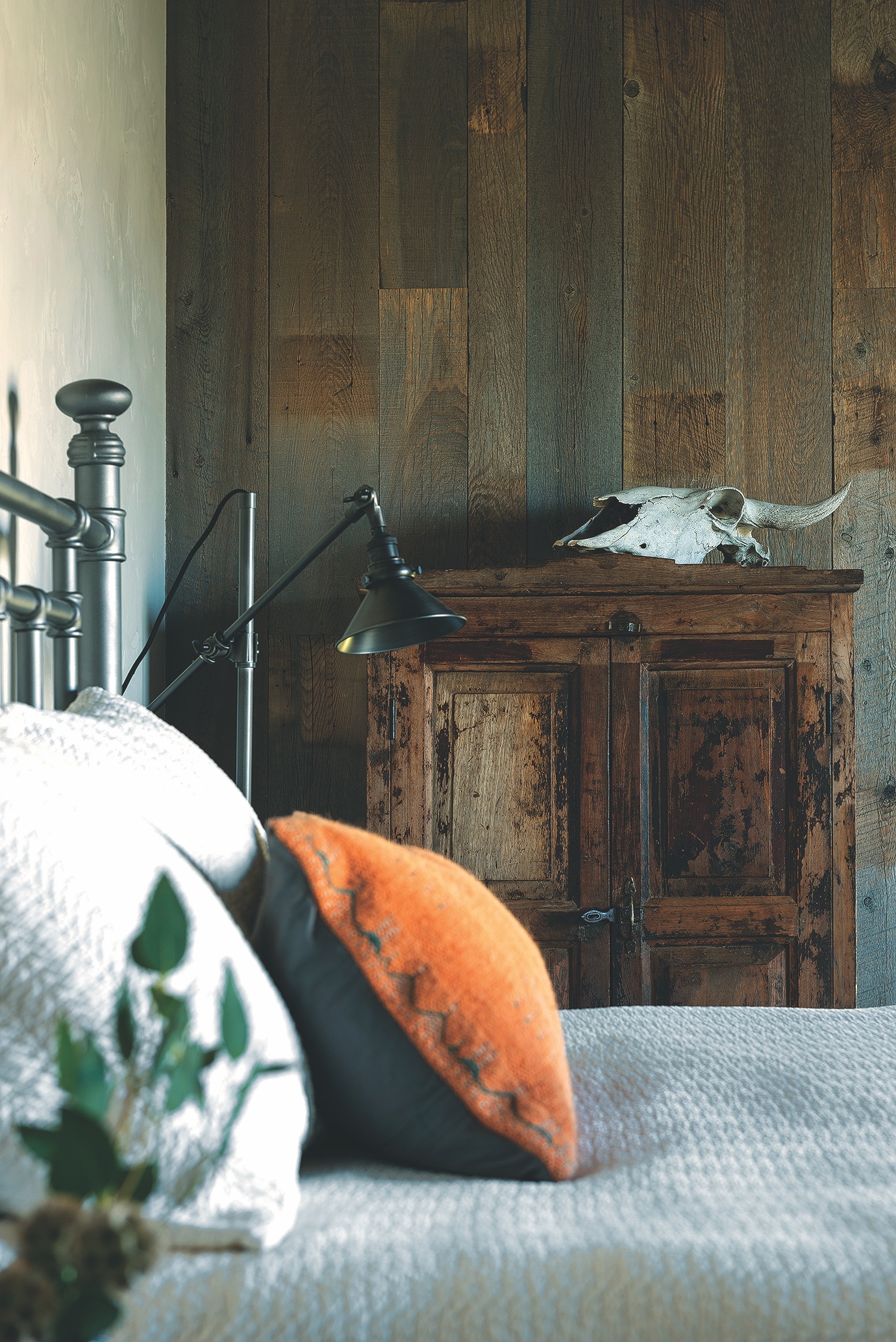 t. An orange pillow by Coral & Tusk provides a jolt of color in the guest bedroom

It also proved to be a safe haven during the pandemic, when the wild landscape inspired Brooke, an author, to pen her latest book, Postcards from Montana, which features poetry, photography and prose inspired by the family’s time there. 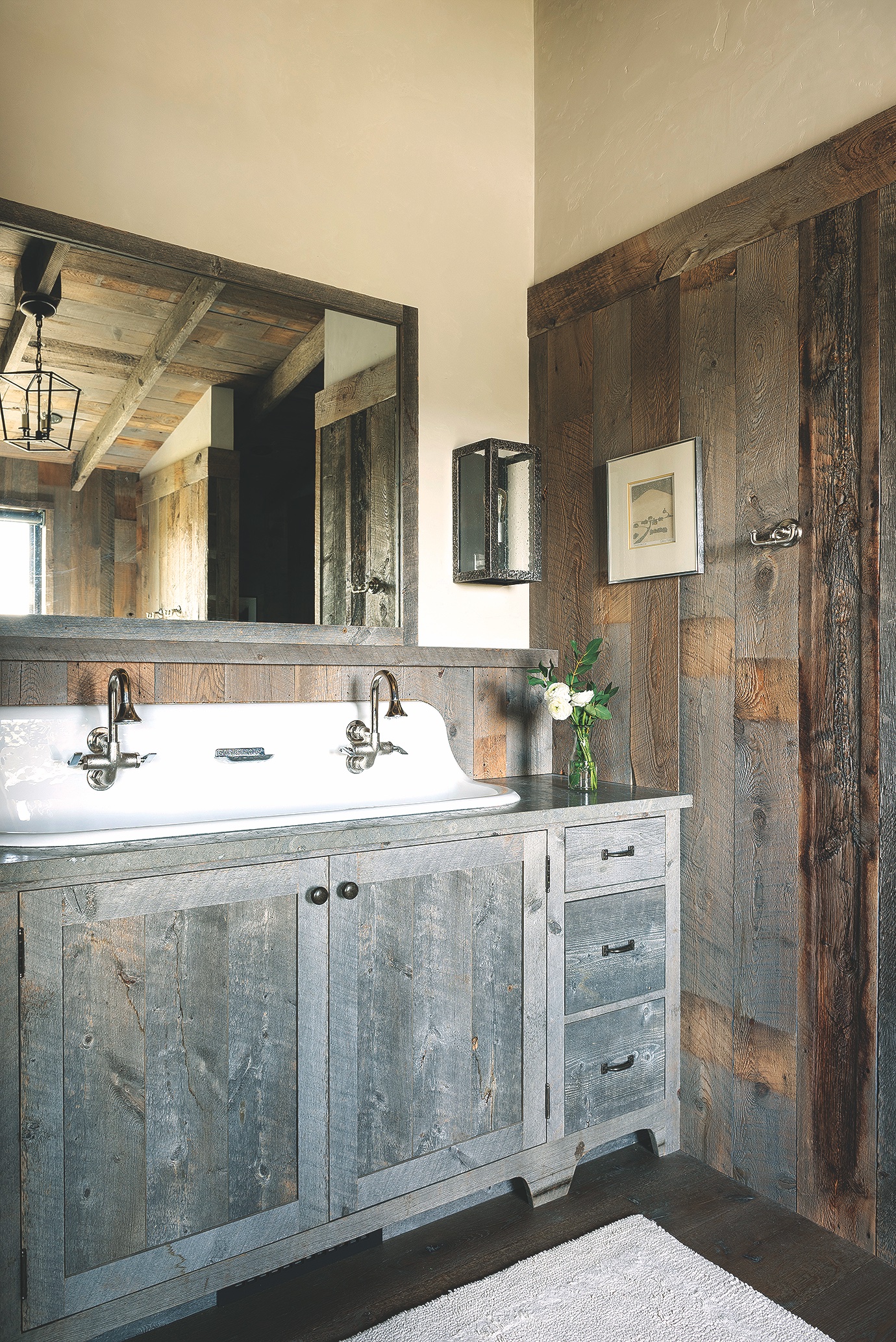 “It’s a privilege to live on that land,” Brooke says, describing the surrounding landscape as immense and wild. “The house feels at once part of an enormous landscape but also tucked in and cozy. It is a house that begs to be shared by many generations to come.” 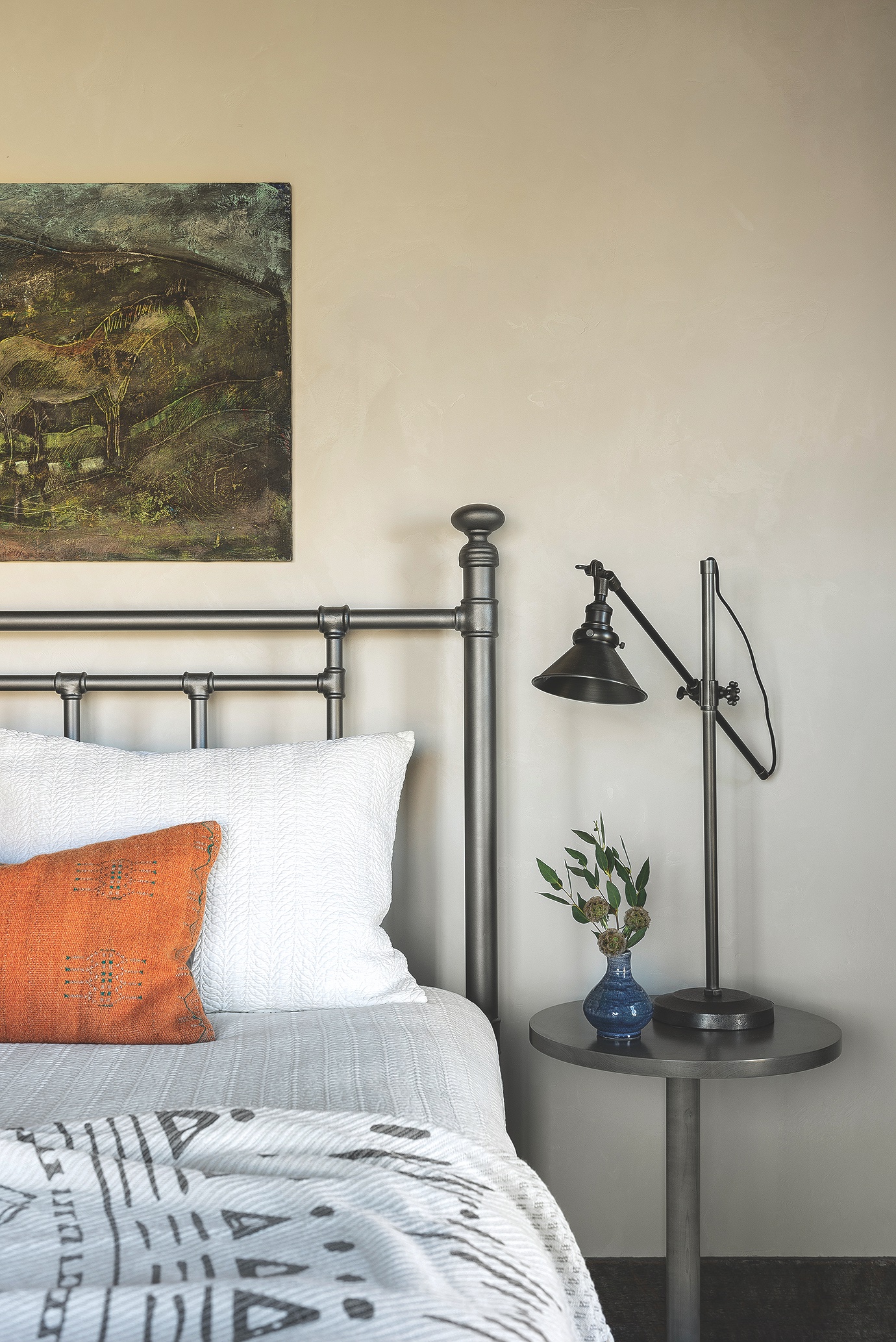 A tripod nightstand from Etoile flanks a bed from Wesley Allen in the guest bedroom.

While this house was designed by architect Matt Miller, of Miller Roodell Architects, to blend in with the natural Montana landscape, the interior design by Abby Hetherington and Alex Gilbertson, of Abby Hetherington Interiors, is a bit more freewheeling with punches of color used judiciously throughout.

“We used colors as neutrals, did color blocking and reused a handful of colors in every single room,” Hetherington says, noting that artwork also provides punches of color. As a result of the restrained palette, “If a chair gets dragged into another room, it still looks good,” Hetherington explains.

Indeed, the Warhols hanging in the kitchen coordinate with the saturated red hues in the nearby living room, where embroidered red draperies play off the kilim fabric on the two chairs in front of the stone fireplace. “It was fun to work with the client to pick those window coverings,” Hetherington says.

Blue takes top billing in the kitchen, which has painted cabinetry and a complementary oversized soapstone backsplash. “Brooke wasn’t scared of color,” Hetherington says, “but she also wanted it to be organic and natural.