Business partners and friends for decades, two families unite to build a home on a private lot with mountain views in all directions 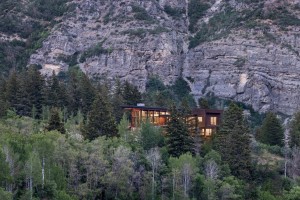 Nestled into a bosky, mountainous setting, the Sundance home designed by Lloyd Architects and built by Killowen Construction had no trouble earning the local architecture review board’s approval. | Photography by Melissa Kelsey

Family isn’t always about blood, at least not for the two broods who built and co-own a modern retreat in the proverbial shadow of Mount Timpanogos at the Sundance Community Preserve in Provo Canyon, Utah. “It’s like that old expression: The family you choose,” one of the owners explains. “It’s rare that two families can own a home like this 50/50 and not have any conflicts.”

Business partners and longtime friends, the tight-knit families were vacationing together in Brian Head, a resort town not far from Bryce Canyon and Zion National Parks in southern Utah, when they decided to build a cabin together. As luck would have it, a primo cliffside parcel at the end of a private cul de sac soon hit the market for the first time in decades. Its 360-degree mountain views were “the best in Sundance,” the owner says. 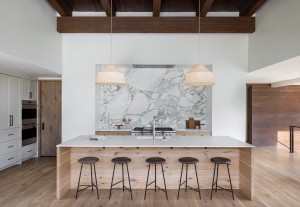 Accented by a mix of painted and white oak custom cabinetry, a graphic Calacatta Vagli Oro slab backsplash creates a beautiful counterpoint to the magnificent mountain vistas in this Sundance project by Lloyd Architects.

After an intensive search, the families asked architect Warren Lloyd to design their new home, presenting him with an in-depth dossier of their likes and dislikes. Those inspired the architect’s first renderings—one that leaned in a rustic direction, the other more modern. “When you work with several families, you have to navigate their visions and expectations,” Lloyd explains. 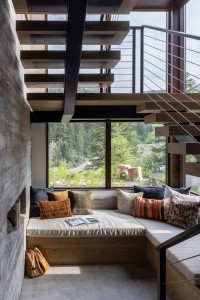 Offering some of the very best views in the entire house, the bottom of the stairway tower is outfitted with a built-in banquette with plush cushions and throw pillows.

That was also the case for the Sundance Architectural Review Committee, which is dedicated to preserving longtime local resident and ardent proponent Robert Redford’s vow to develop the land in a thoughtful and environmentally conscious way. Once the clients selected Lloyd’s modern mountain concept, he presented it to the three-person committee, which includes the Academy Award-winning actor and director’s daughter, Shauna Redford. Afterward, “they became totally on board with the design, and they have been solid supporters ever since,” Lloyd says.

With approval in hand, construction commenced on the unique structure, which is clad with fire-treated wood siding atop a board-formed concrete foundation. The materials flow inside, where large windows frame majestic mountain views from nearly every room. “It has simple forms, but it doesn’t try to ascribe to a particular style,” Lloyd says, pointing to the slanted flat roofline over the great room. “It feels timeless. 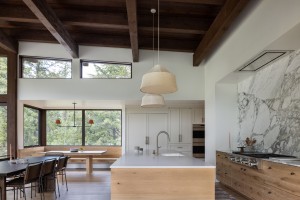 The double-height great room’s floor-to-ceiling windows frame gobsmacking views of Mount Timpanogos. Accented by the structural wood-beamed ceiling, a board-formed concrete fireplace creates a second focal point for a pair of contemporary tailored sofas and matching low-slung chairs, all covered in neutral fabrics. “They had a vision of the space being organic, restful and peaceful,” says interior designer Ann Tempest, who worked closely with a local family member on the design. 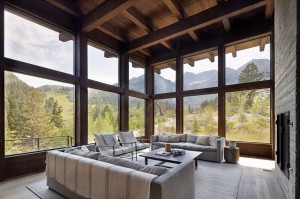 In the living area, a pair of sofas from Shoppe Amber Interiors defines a convivial seating area atop a rug by Concepts International from Artifacts.

Yet, the view is not the only source of drama. A veiny Calacatta Vagli Oro slab packs a punch above the range in the open kitchen, perfectly complementing the mix of painted and white oak cabinetry. “The entire niche was customized to fit the backsplash,” construction project manager Mame Martin says. “The clients knew without a shadow of a doubt they wanted it to be their focal point.” 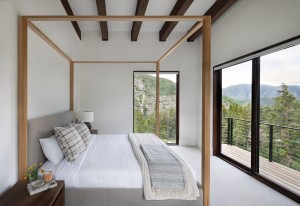 A natural oak four-poster bed with an upholstered headboard from Shoppe Amber Interiors plays off the home’s modern architecture.

And the light-filled stairway tower is equally breathtaking. Anchored by a board-formed concrete wall, the floating wooden stairs lead to a cozy seating niche furnished with a built-in sectional that has become a favorite spot to read and relax. “It has some of the best views in the house,” Lloyd notes. 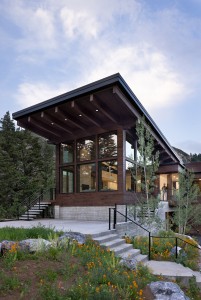 Clad in fire-treated wood siding atop a board-formed concrete foundation, the modern mountain abode serves as a peaceful retreat for the two families who built it together.

Perhaps unsurprisingly, the modern mountain dwelling resonates with the owners, who spend as much time there as possible. While the area has a number of fine restaurants and offers ample recreational activities, they often prefer to stay put, gathering in the great room to converse, play cards or just gaze at the magnificent view of Mount Timpanogos through the floor-to-ceiling windows. “There’s a sense of majesty here that’s just overwhelming,” the owner says. “It’s a special place to be.” 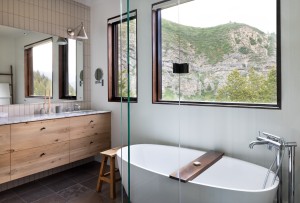 Perfectly placed to take in the views, a soaker tub defines the spa-like primary bathroom.

In deference to the natural grandeur of Mount Timpanogos, the designers of the modern mountain abode near the slopes in Sundance, Utah, went with a natural design scheme that both plays off the architecture and emphasizes the jaw-dropping views.

“We didn’t have a choice here, because that presence is so large,” says interior designer Ann Tempest, who worked closely with the adult daughter of one of the owners to select the furnishings, fabrics and lighting throughout. “The house is minimalist, organic and natural, so the focus is the landscape and the mountains.”

Instead of pops of color or graphic patterns, for example, the designer incorporated tailored contemporary pieces covered in natural materials like cotton, leather, linen and wool. In addition, the furnishings have simple lines—no curves or heavy features that might distract the eye.

Tucked into a corner with windows on three sides, for example, a linear oak banquette and matching table define the breakfast area. In the same spirit, a set of steel-framed chairs with leather seats surround a simple wooden dining table in the center of the great room. “The style is clean and simple,” Tempest says, pointing to the lush views just outside. “It all just feels like it’s part of the landscape, and that’s what I love about it.”

A Monograph in Collaboration by Architectural Firm Ferguson & Shamamian