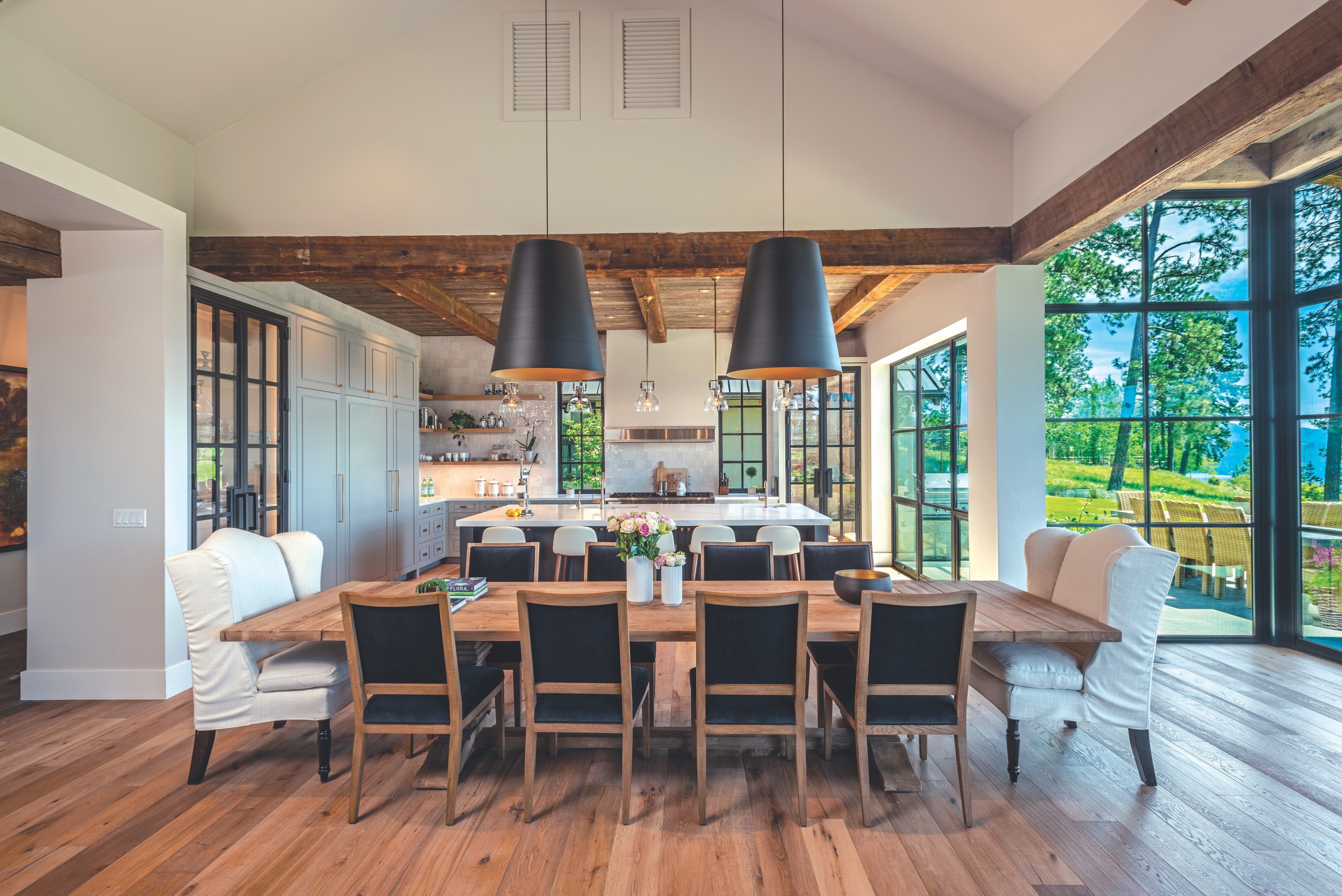 Playing off the metal-framed windows, a pair of oversized black drum pendants illuminate the handsome wooden table and chairs, all from RH, in the open dining area. | Photography by Joel Riner

Every year, Idaho resident Kevin Westfall hops into one of his many sports cars and embarks on a lengthy road trip through the Northwest and into Canada, stopping at the best golf courses along the way. “You’re playing right up against the snow-covered Canadian Rockies,” he says. “It’s a dream.” 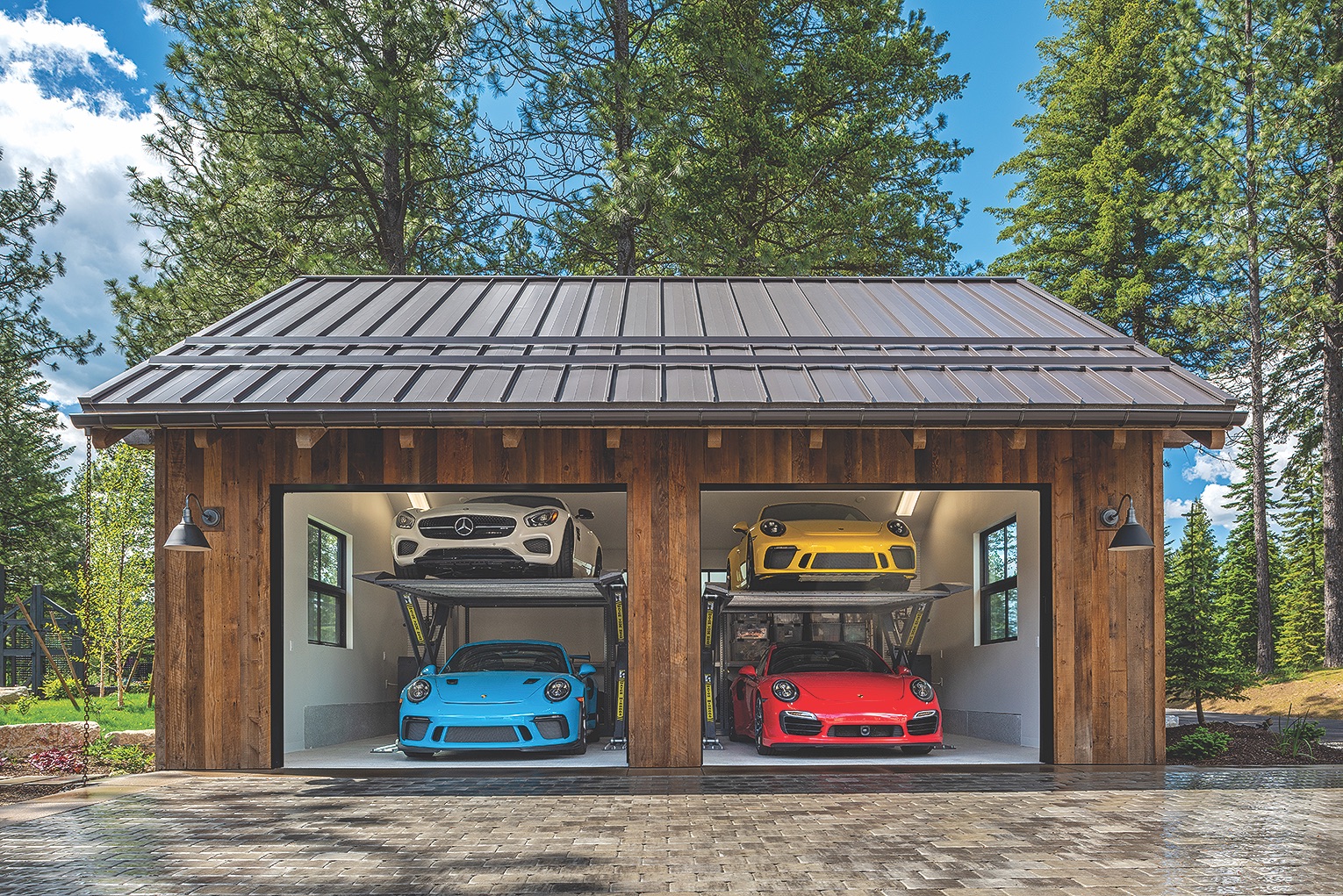 While a lift doubles the number of cars that can be stored, work is already underway on another garage for the owner’s enviable automobile collection.

Thanks to a lift, Westfall’s vehicles—which include Porsches, BMWs and an Aston Martin—are stacked atop one another in the detached garage on the four-acre property overlooking Lake Coeur d’Alene, where he and wife Beth recently built their primary residence after years owning a vacation home in the area. 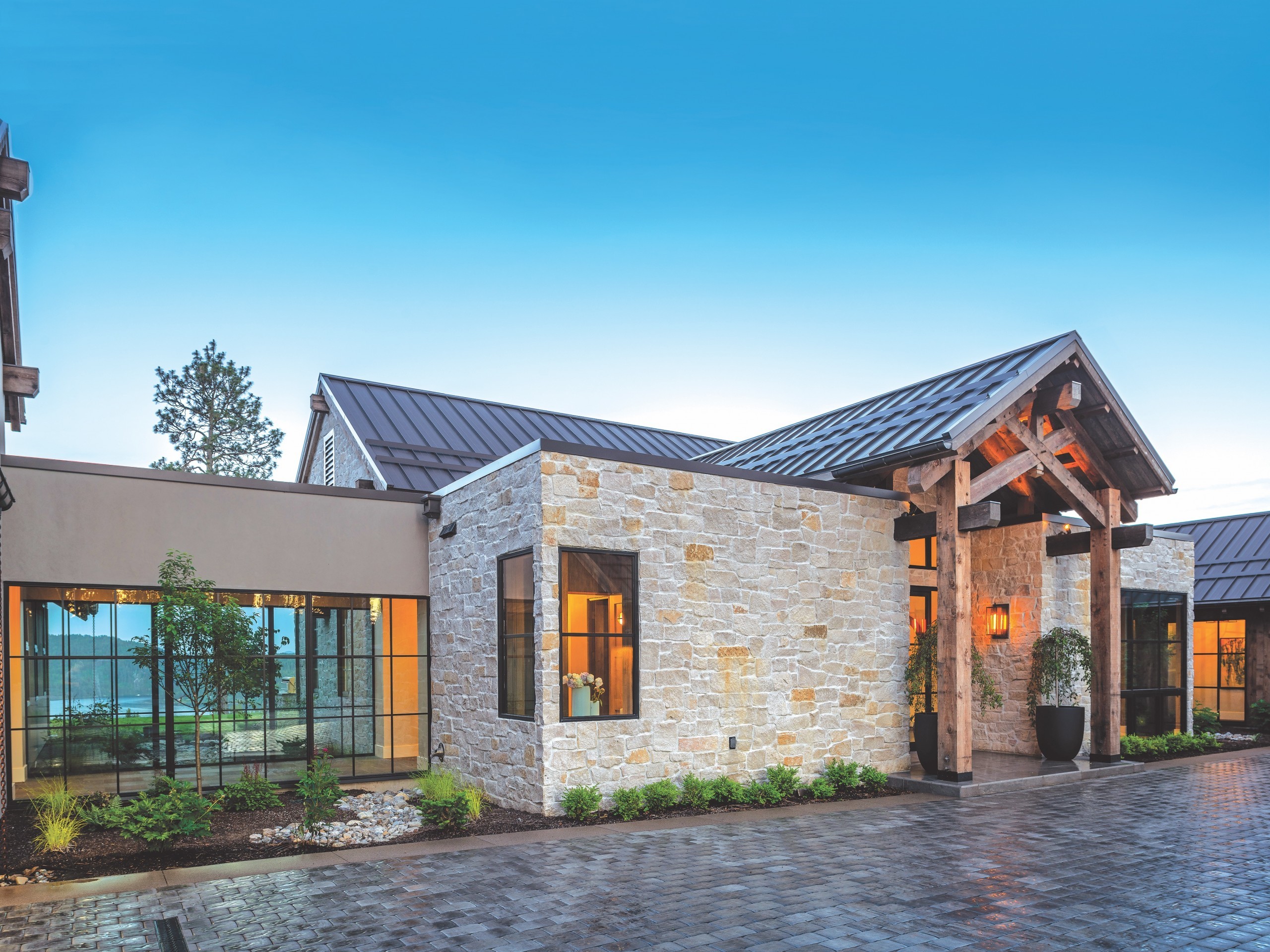 To create their new dwelling, the couple turned to principal designer Eric L. Hedlund and local builder Kevin Gunder. It was Hedlund who completed the design of many other projects in the area, including the local golf clubhouse where the Westfalls often play. “He was heads-up the best guy for the job and the most creative,” Kevin Westfall says. 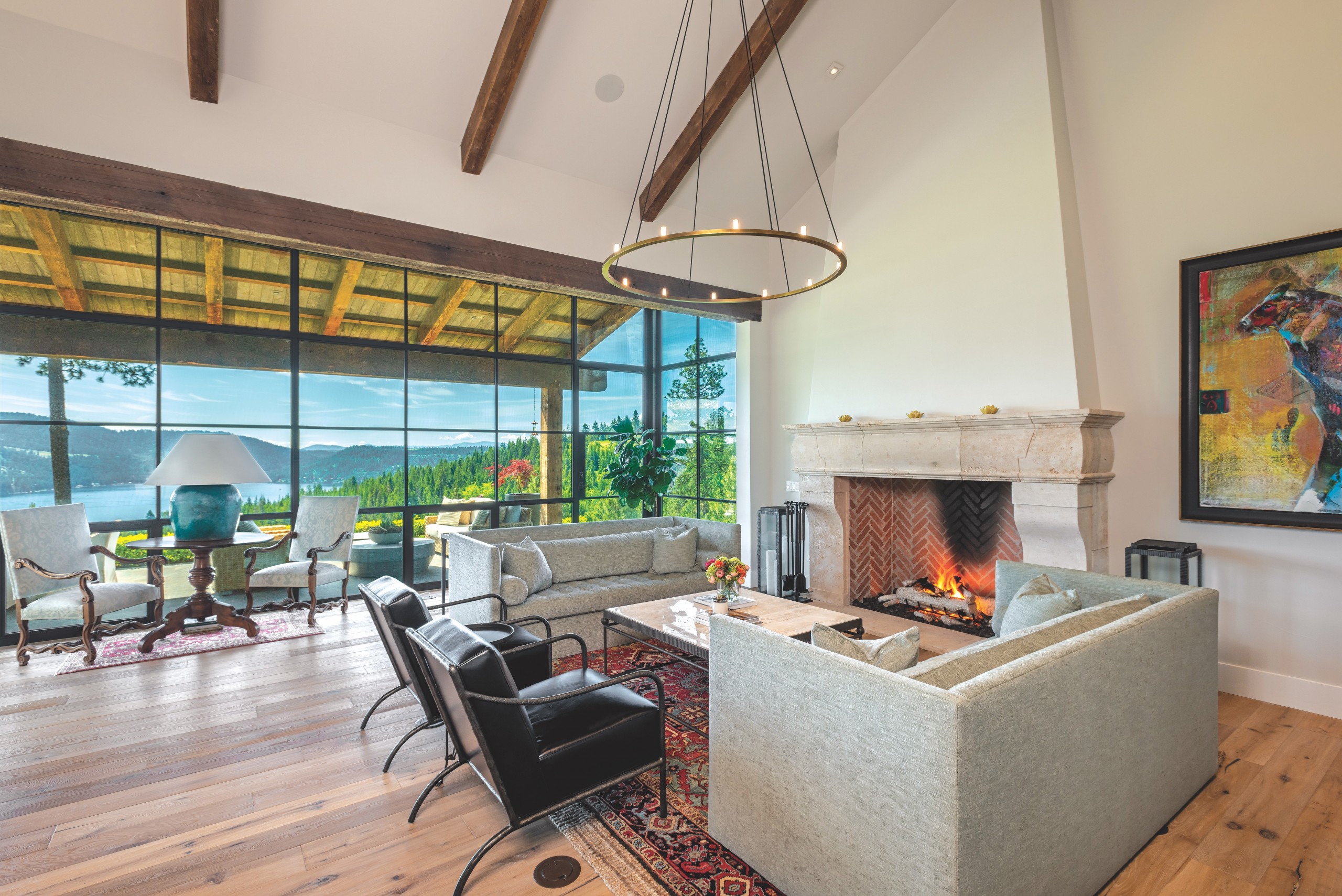 The fruit of their collaboration is a sprawling waterfront abode, its main living areas housed in a central stone-walled structure with a standing-seam metal roof that’s weathering brown rather than the standard galvanized finish. “It’s a little more modern,” Hedlund explains.

A pair of glass-walled corridors connect the great room with the primary bedroom suite on one side and the guest suites on the other. Clad with Synergy stucco and reclaimed wood, the pods look as if they might be additions to the original stone farmhouse structure. “They wanted this house to be a piece of art,” Hedlund says. “We paid attention to every detail.” 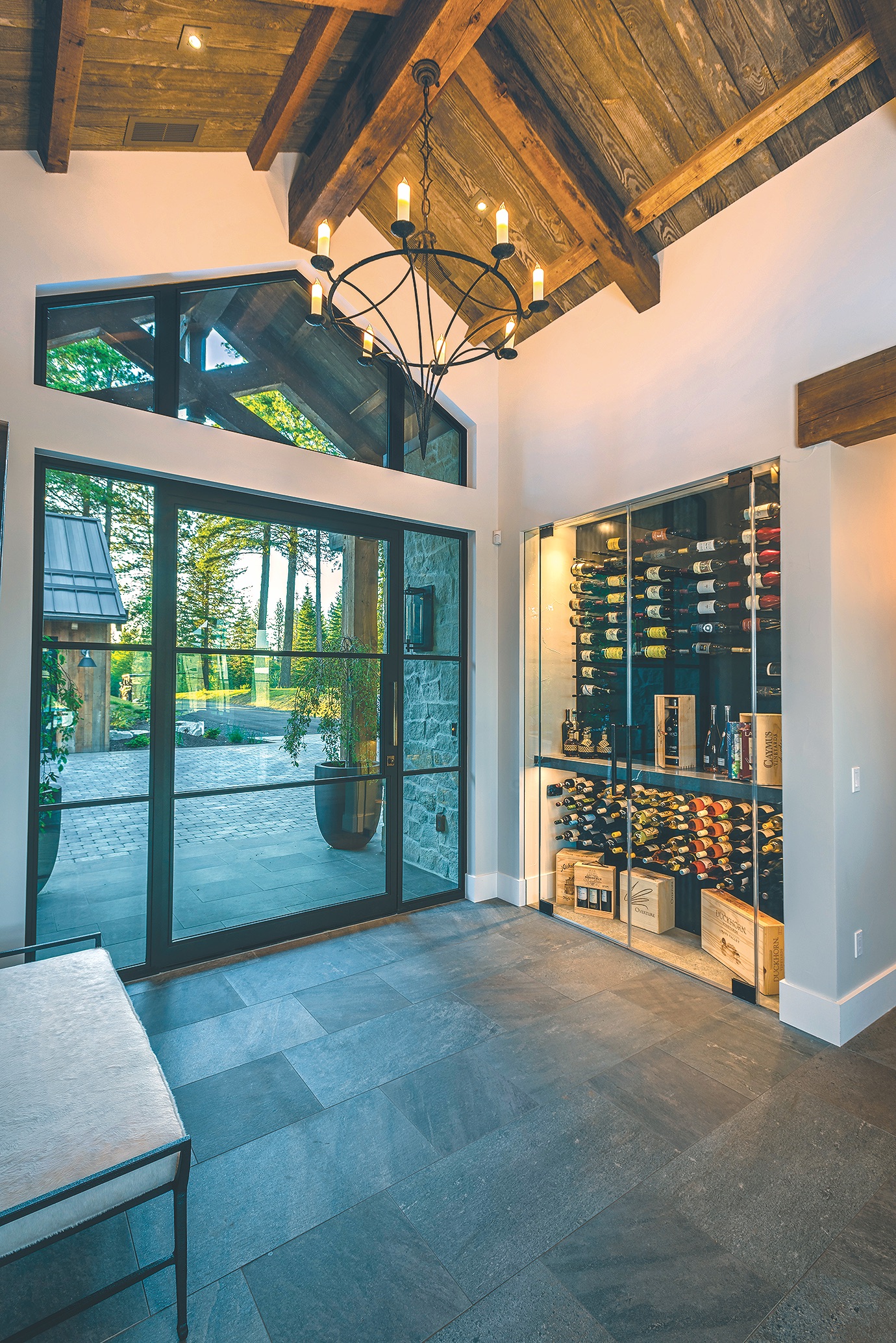 An iron chandelier by Formations calls attention to the peaked wooden ceiling in the home’s entryway.

That also holds true for the interior. In the rooms facing the lake, black metal-framed windows wrap the corners, capturing the panoramic vistas while juxtaposing more rustic elements, which include white oak flooring, reclaimed timber beams and hand-troweled gypsum walls. “Beth taught them to plaster the walls the way she wanted,” Kevin Westfall explains, pointing to the subtle ripples in the surface. 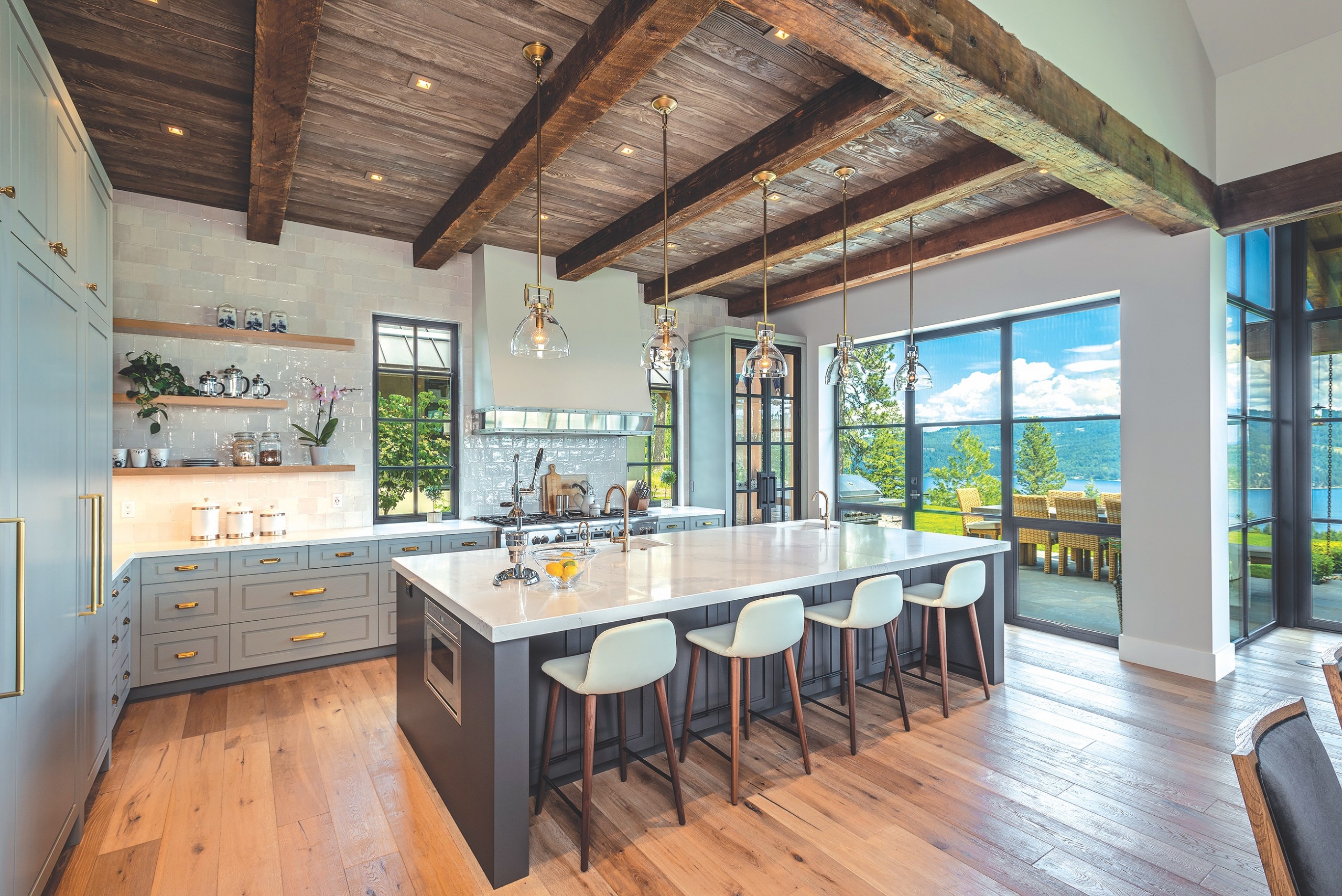 Reclaimed timbers from Montana Reclaimed Lumber Co. add a sense of rusticity to the well-appointed kitchen.

In front of the limestone fireplace mantel in the living room, for example, an antique rug coexists easily with a pair of custom sofas and metal-framed chairs around a clean-lined cocktail table. And steps away in the open dining area, black drum pendants illuminate a rustic wooden table surrounded by white wingback host chairs and black side chairs. 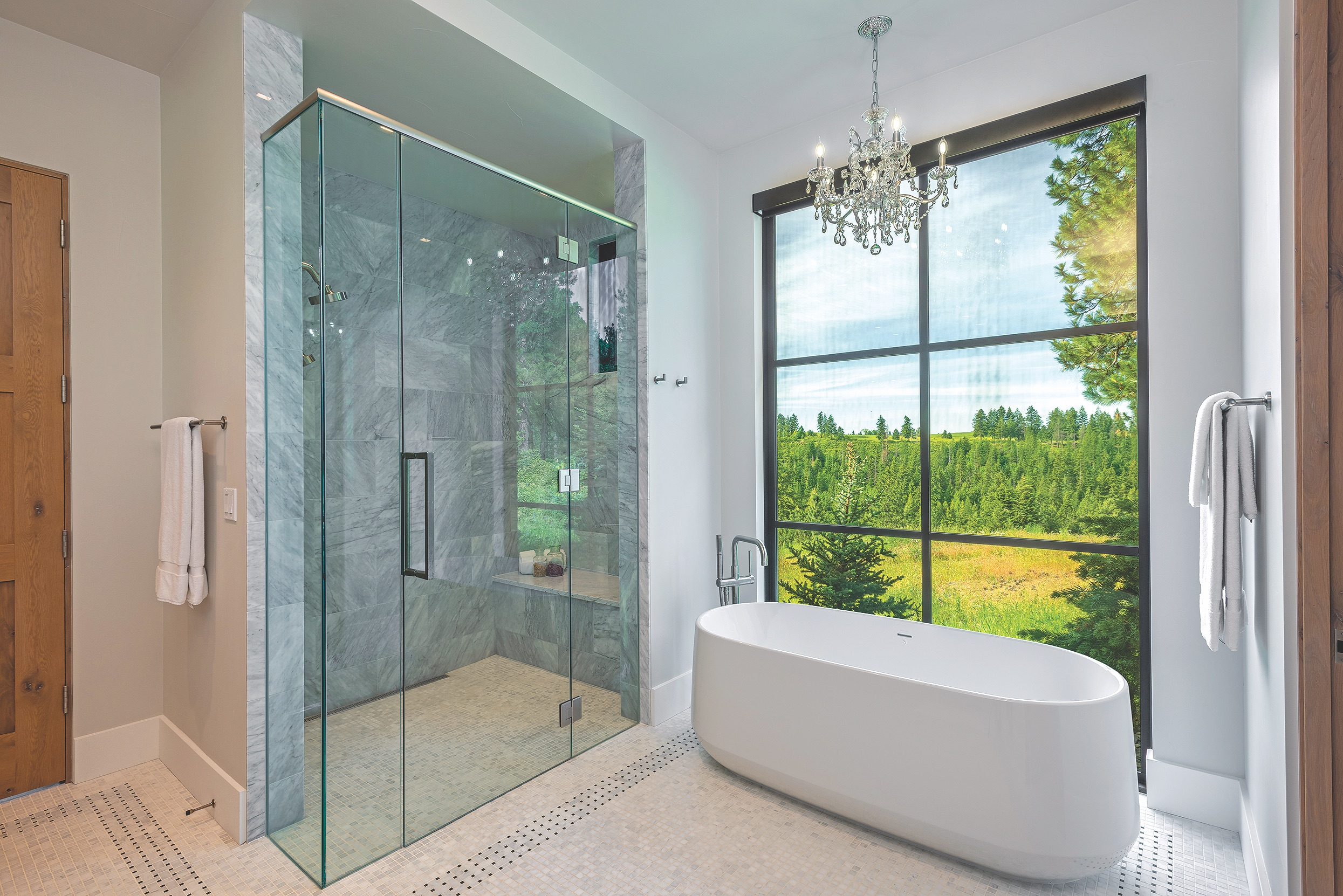 Underneath a traditional chandelier, a freestanding soaker tub takes advantage of the scenic views from the elegant main bathroom.

Young notes that Beth Westfall is “from Denmark and definitely had a European mindset,” referencing the light palette and mix of furnishings. “You could plop this house down on a field in Europe, and it wouldn’t be out of place.”

The interplay between rustic and modern likewise defines the kitchen, where the reclaimed wood ceiling plays against gray and charcoal cabinetry, light quartz countertops and gleaming porcelain tile backsplash. “Reclaimed wood comes with a lot of movement, so it takes much longer to install,” Gunder says, “but it’s worth the result.” 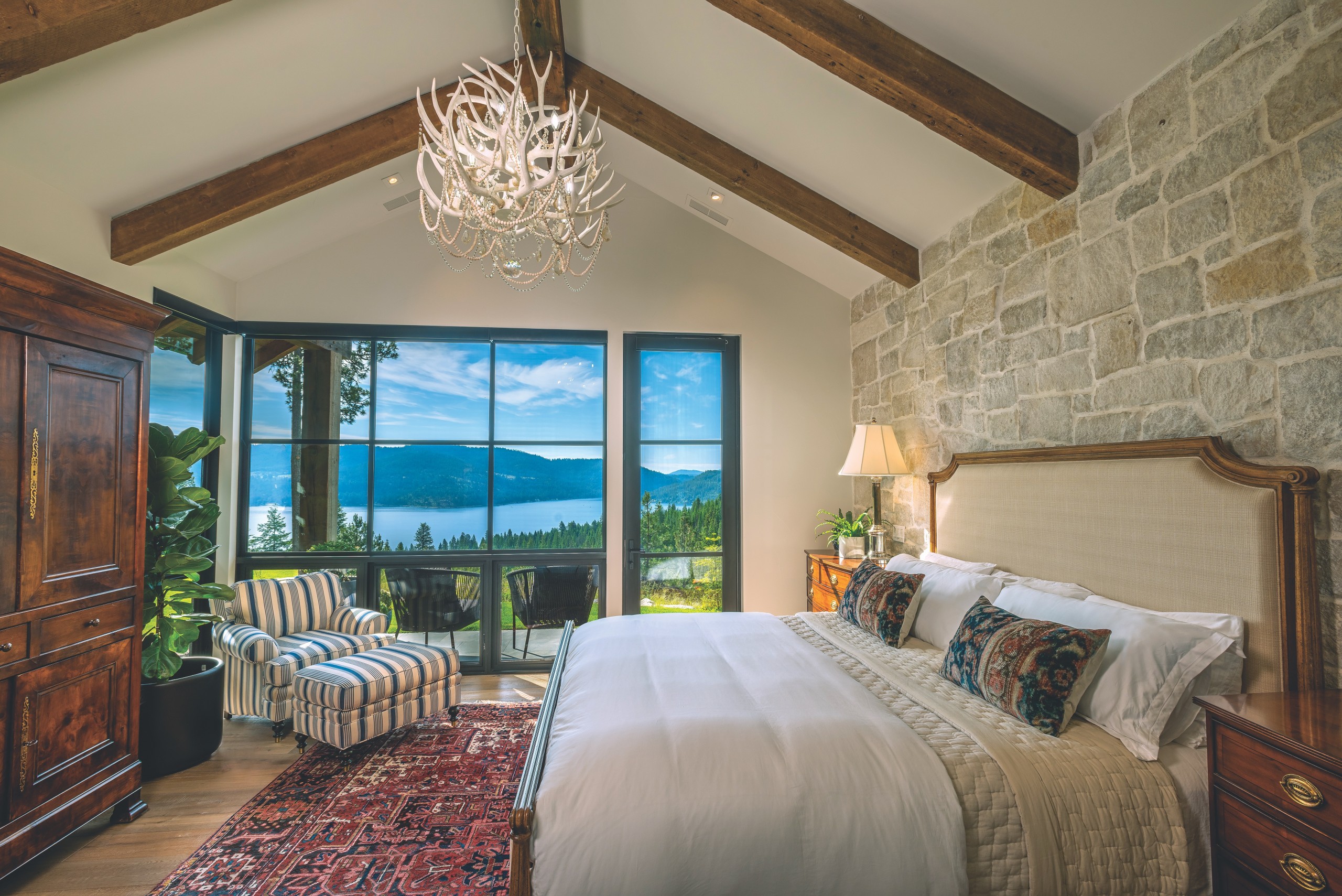 An antler chandelier, wood beams and an exposed stone wall foster a relaxed milieu in the main bedroom.

While they had remodeled houses in the past, the Westfalls had never built a home from the ground up. For this home, they chose to be involved in every aspect of the project, weighing in on the most minute details, such as where to place the light switches.

“We had a great relationship with the contractor and all the subcontractors,” Kevin Westfall says, noting he treated the whole crew to a weekly lunch. “Most people say building a house is torture, but it was actually a lot of fun.”

It was so enjoyable, in fact, that work is already underway on phase two, which will include a one-bedroom casita, a greenhouse for Beth and a second garage for Kevin. “The projects will continue,” he says, “but this may be the last house we build.”

It’s not easy, after all, to top perfection. 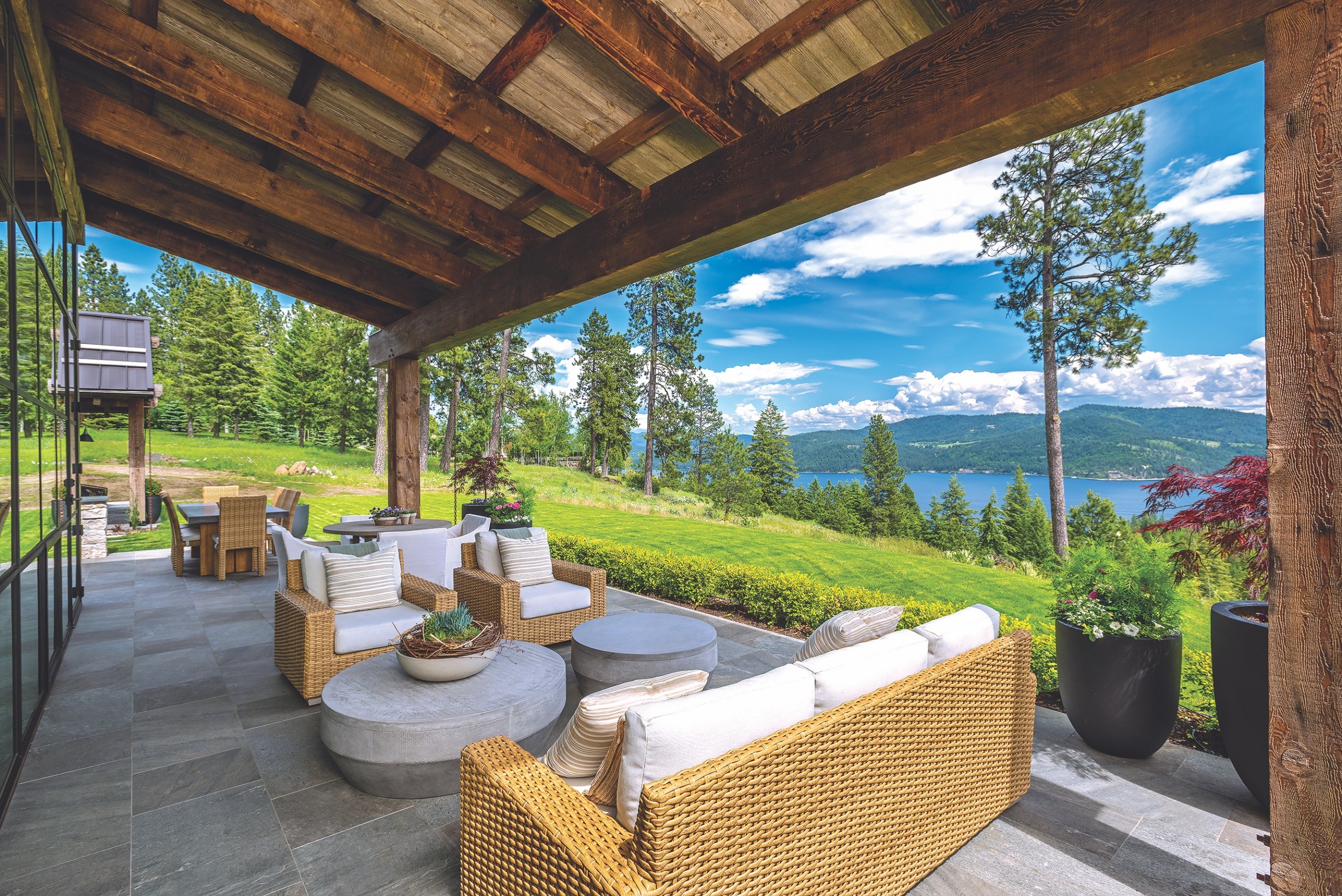 IT’S IN THE DETAILS

More than most, this modern farmhouse by lead designer Eric Hedlund, colleague Amy Young and builder Kevin Gunder is all about the many well- considered details. Here are some of our faves:

(1) In the powder room facing the motor court, a pair of custom wooden window shutters slide back into the wall when not in use—an ingenious, stylish privacy solution. “It’s a fun design element,” Hedlund says, noting it’s his favorite room in the house. (2) Just inside the front foyer, a custom wine cellar with double glass doors frames the owners’ extensive collection like a piece of art. (3) The kitchen’s custom plaster range hood with a stainless-steel ribbon along the bottom edge perfectly walks the line between rustic and modern, creating a beautiful focal point. (4) A nod to the past, the kitchen’s built-in cabinets with metal-framed glass by Durango Doors display Beth Westfall’s collection of china and glassware. (5) In many of the spaces facing the water, the doors and windows wrap around the corners, expanding the field of view and flooding the space with natural sunlight. “There’s nothing we’d change about this house,” owner Kevin Westfall says. “It’s breathtaking.”