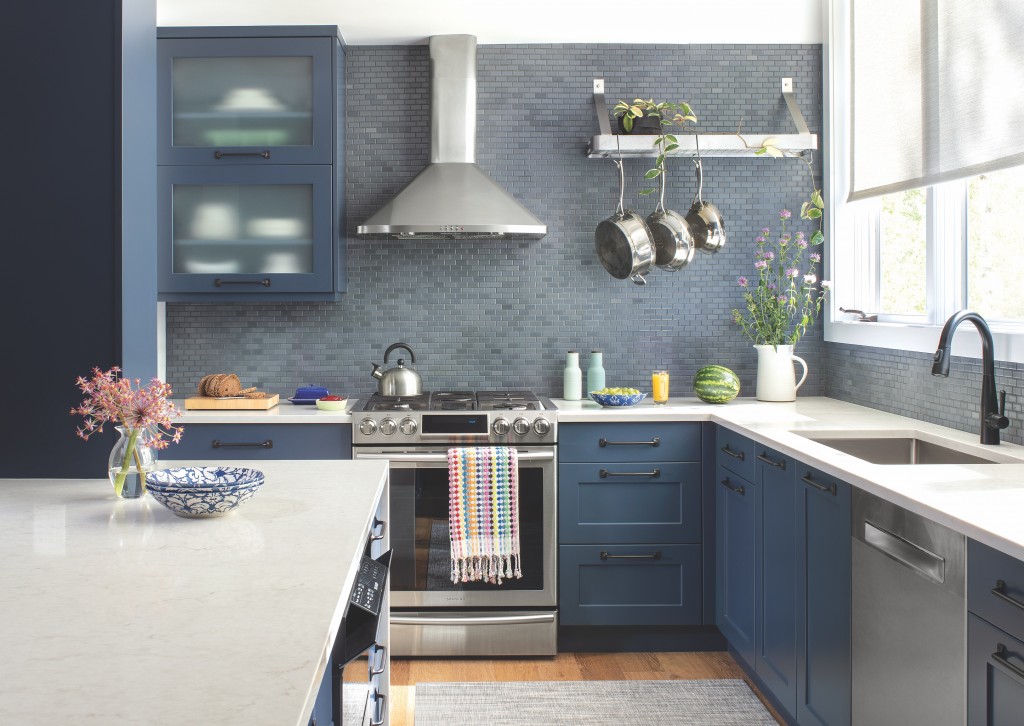 Luxury finishes and commercial-grade appliances have been finding their way into mountain home kitchens, but designers say homeowners are more intent on creating a space that is warm and welcoming than trying to impress.

Togetherness is a priority, and the kitchen is the prime hangout zone when people gather. It’s all about entertaining—whether that means casual occasions preparing meals with kids and grandchildren or hosting a group of longtime friends for the weekend. “We used to close off dining rooms and living areas, but now a casual, open feel is important,” says interior designer Jodi Fleming. “You used to hide your crystal, too. Today people want to be able to pick a glass off a shelf and help themselves. That is what is driving design.”

“Kitchens are such a multipurpose space,” agrees Colorado designer Alyson Leingang of Studio 80. “It’s where you want to be with family, cooking, or just reading the paper. We try to design a space where we would want to spend time ourselves.”

For one couple who frequently host their children and grandchildren, Studio 80 designed a kitchen featuring a peninsula with seating for quick meals or conversation plus an adjacent banquette with upholstered leather benches and chairs around a big table. There’s no formal dining room, because “you want a place where you can hang out in your ski pants,” Leingang says.

Pull up a chair and read about four kitchens we’d all like an invitation to visit. 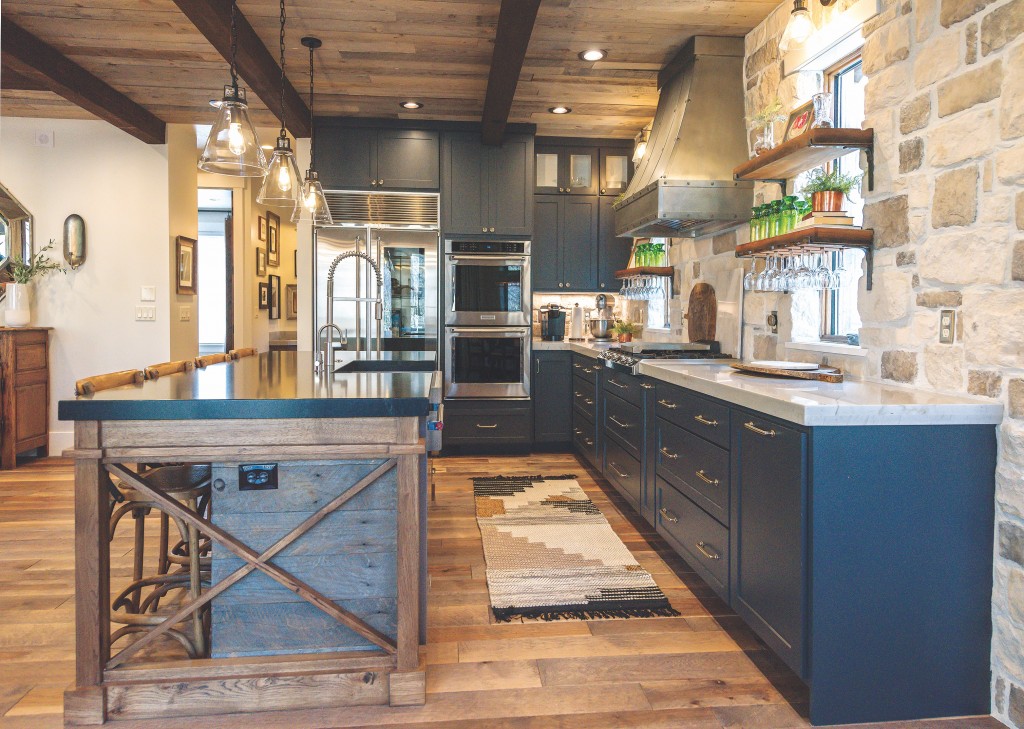 Kim and Todd Nilson’s mountain getaway in Sundance, Utah, is just a 45-minute drive from their main residence, but it’s a world apart. Kim loves to cook for her four children, extended family and friends, so they put extra effort and resources into the kitchen. The stone back wall, reclaimed wood and beams on the ceiling, and hickory floors give the space a rustic lived-in character that belies its recent vintage. Kim made sure the layout would be as functional as it is beautiful, so she cherry-picked the appliances, including a commercial grade Marvel refrigerator/freezer, KitchenAid double wall ovens and an Italian ILVE cooktop. 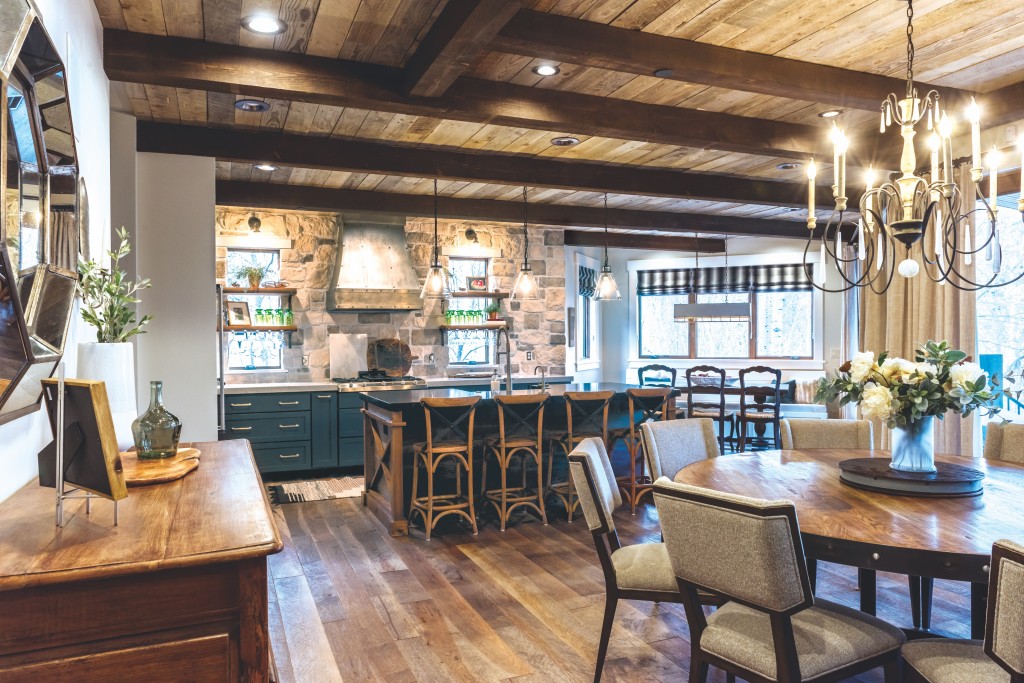 “The muted palette, with cabinets painted in Benjamin Moore’s Cheating Heart and trimmed in  antique brass hardware, gets a pop of color from vintage green glasses found at a local antique store. “We love the way the early morning mountain light streams through them,” she says. 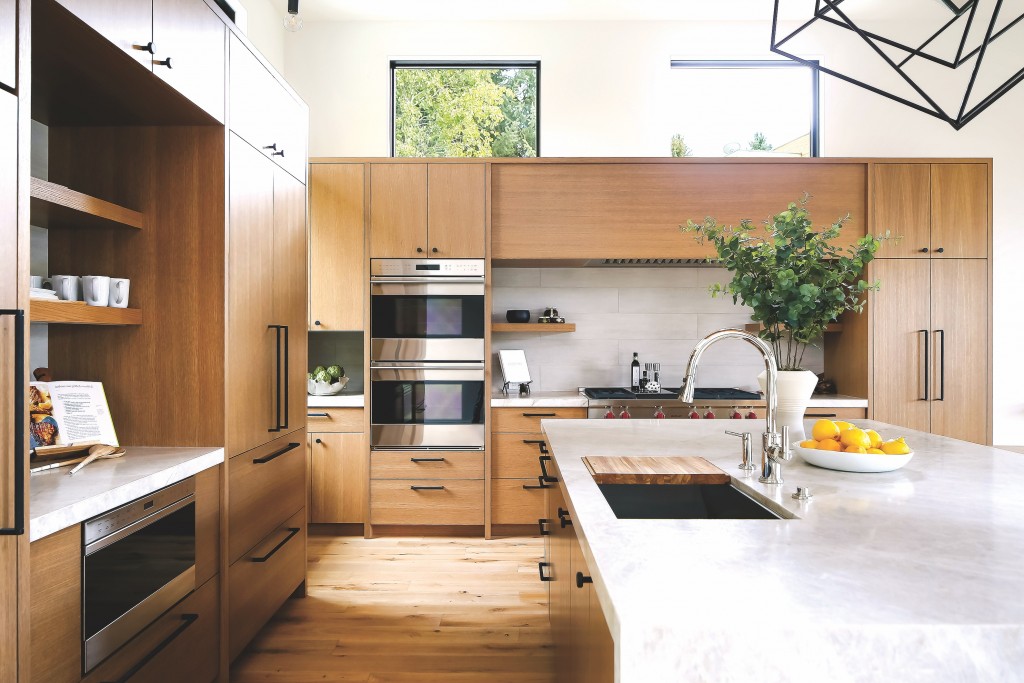 When designing a mountain home, Jodi Fleming says her goal is to connect it to its environment. One such project in Sun Valley, Idaho, featured an active, outdoorsy family. “They are skiers and stare at Mount Baldy from one side [of their home] and a beautiful backyard on the other,” Fleming explains. For them, she created a big open kitchen with a door that leads to a deck, and ample space indoors for cooking and entertaining. The kitchen has a wood beam tray ceiling and windows perched high on the walls to let in the natural light. 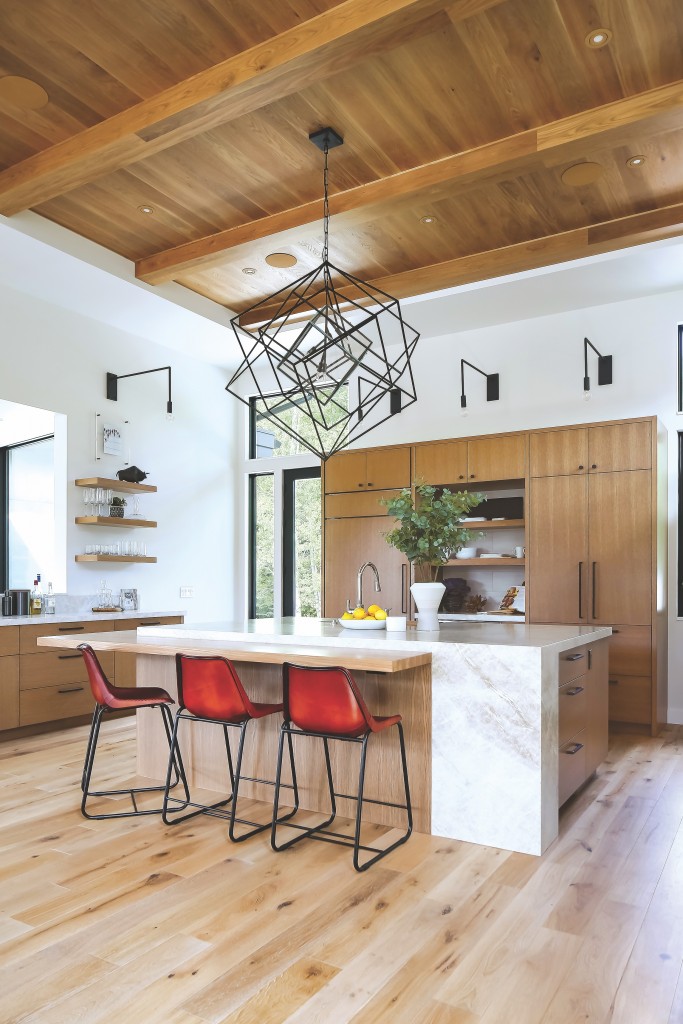 Kelly Wearstler’s aged iron Cubist chandelier commands the center of the room, hanging over an island with waterfall edges, topped in honed and leathered quartz. Leather stools and a wood counter anchor one side of the island, while meal prep occurs on the other side. White rift oak cabinets anchor the bar, which has open shelving. “They put the bar there because they don’t like to separate,” Fleming says. “They want to be in one big room together.” 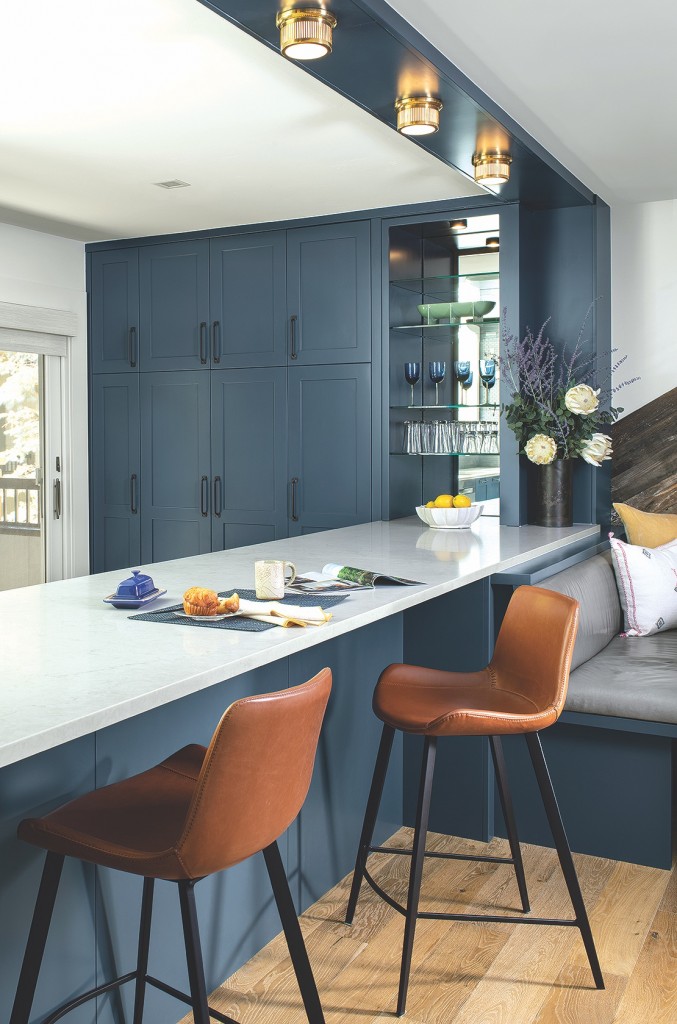 When planning a facelift for the kitchen in their Vail, Colorado, condominium, an Arizona couple encouraged project manager Alyson Leingang and interior designer Tracie Schumacher of Studio 80 to keep a few directives in mind. “They enjoy having their grandchildren come to visit,” Leingang says, so it had to function multigenerationally, “whether people are seated at the bar or reading the paper at the banquette.” Removing a wall that was in the middle of the room opened up the space and connected it to the rest of the living area.

The use of color, especially the choice of Behr Paint’s Midnight Blue for the Fina cabinets, makes an impact, as does the Ann Sacks Savoy Mosaics tile for one wall and the backsplash. Stainless-steel appliances, a brushed stainless hood and a pot rack are a cool complement to the Caesarstone countertops and blue finishes. 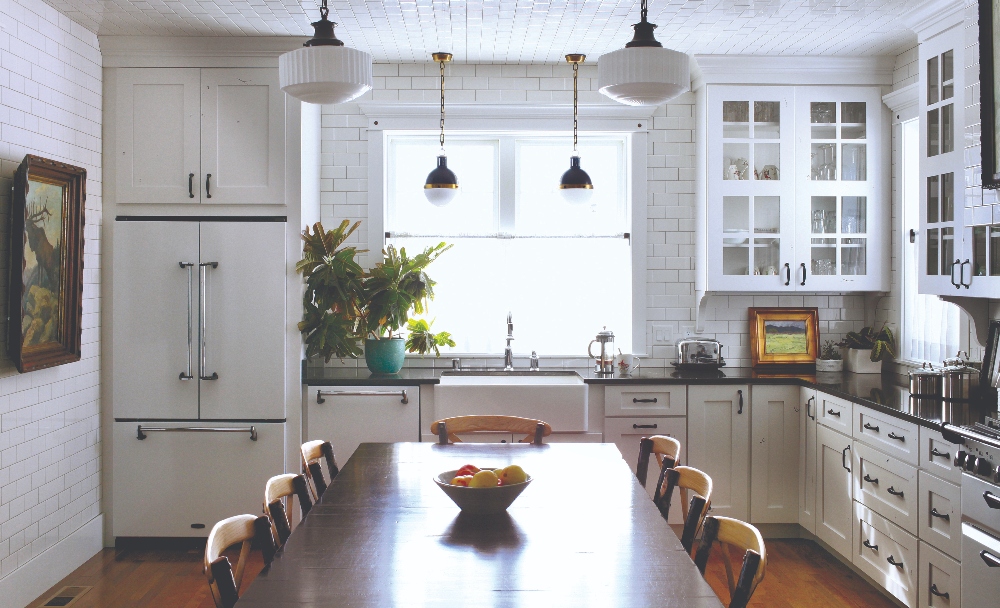 Jeremiah Young set out to create a “hard-working family house” when building his residence in Billings, Montana. “We wanted to see how much soul you could give it without spending a fortune,” he says. A lot, judging from his kitchen alone. Owner and creative director of the interior design firm and showroom Kibler & Kirch, Young designed an updated farmhouse-style kitchen with white subway tile that covers not just the walls but the ceiling as well. It makes for a surface that is “lovely and reflective and functional,” he says. 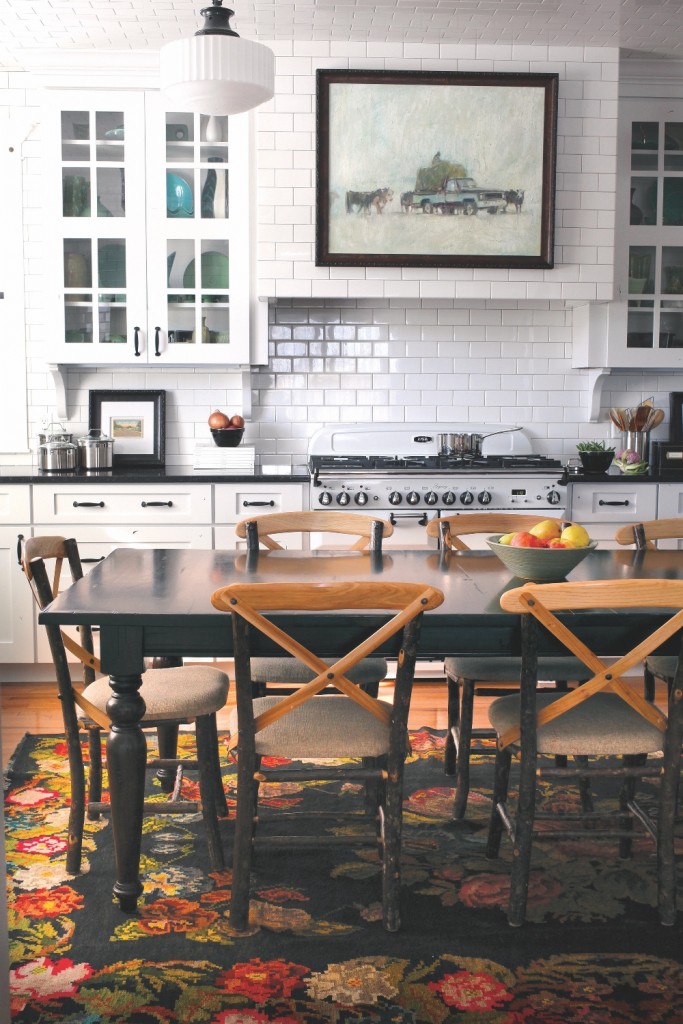 Black quartz countertops and white glass-front cabinets keep the palette simple, with an AGA gas range to match. Paintings provide a bit of color, as does a rug, but the heart of the  room is a farmhouse table. “It’s where our family lives,” Young says of the American-made Lorts design. “On one end the kids will be doing homework, and on the other you can prep food. I don’t know why more people don’t do it.”