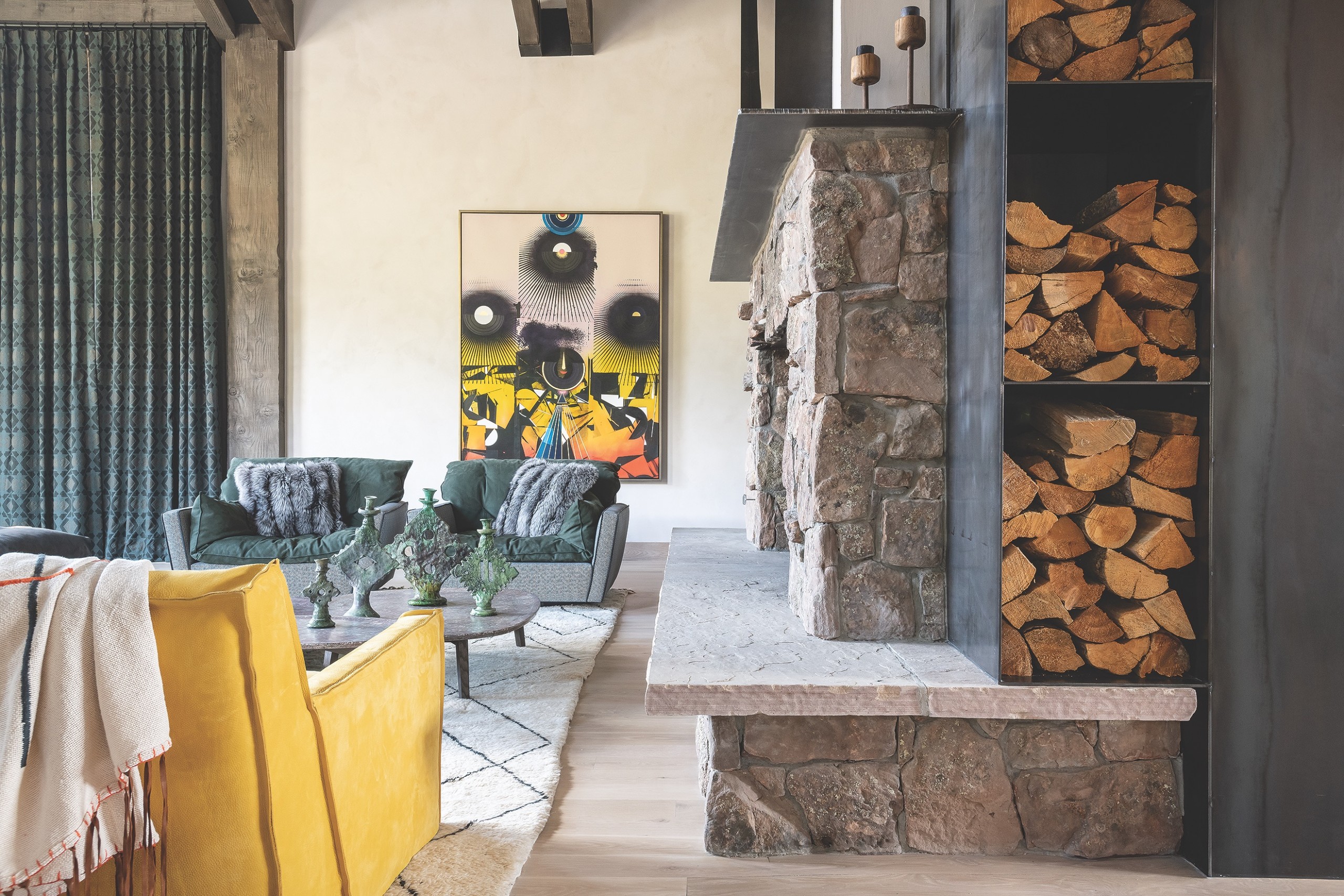 The living room’s stone fireplace originally ascended to the ceiling but was scaled down for the redesign, while saffron yellow in the painting and armchair were added to instill another dash of modernity | Photography by Audrey Hall

They say time’s great march forgets no one, but the same can be remarked of many homes as well.

Interior designer and owner of Urbaine Home (and its full service of interior designs) Rain Houser understands just how much a good renovation can make an abode seem timeless. “Our clients purchased a ski house that had been built in the early 2000s. But while the structure itself had great potential, the interior was long overdue for an update,” she reveals. 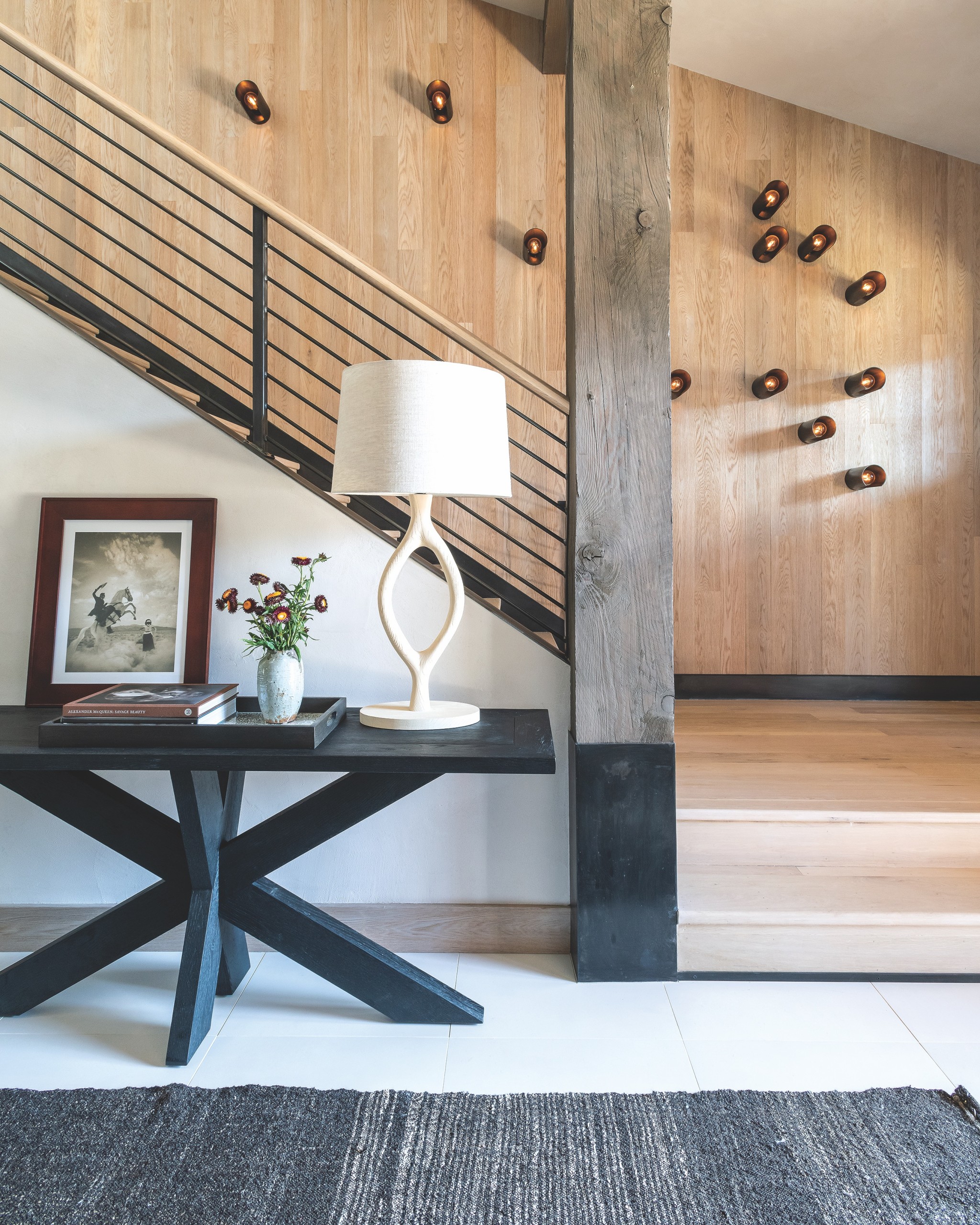 Inside the original home, folded within the hills of Montana’s Yellowstone Club, had stood mostly craggy flagstone and truncated rooms that rendered what was, for Houser and her clients, “an overbearing effect.” Houser knew she had to liberate the rooms, usher in light, and revitalize the house. “Compartmentalized spaces were opened up for this young and growing family and the dark wood finishes were sanded back to show off their natural tones.” 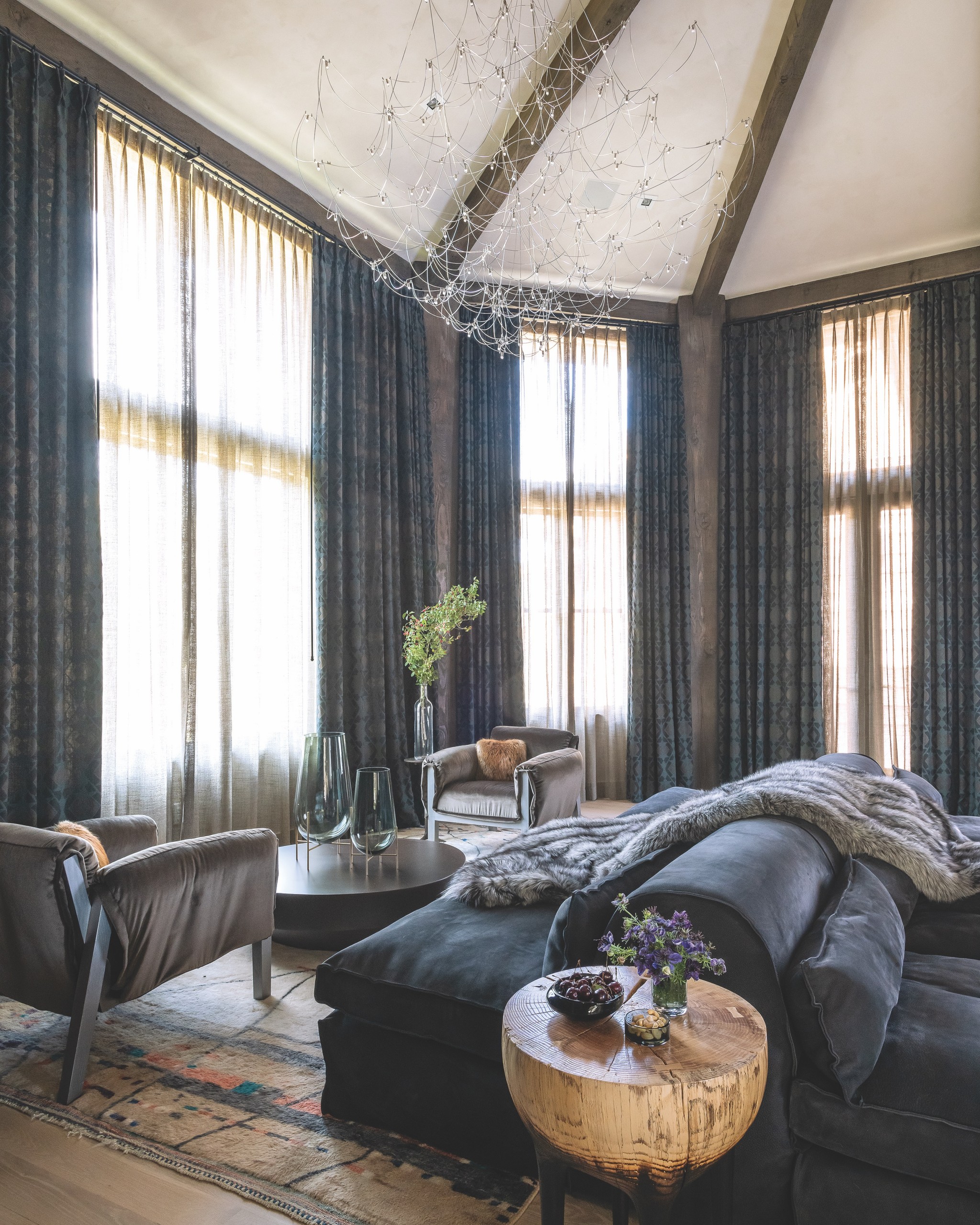 Emphasizing texture, the double-sided Italian leather couch offers a sumptuous surface made more so by the silver fox fur blanket.

For her clients, the dark spaces had felt uninviting and harsh. “Opening things up felt homier,” says the homeowner. “And it worked for our young children, giving the kids space to run around and play.” Houser opted for eternal designs that could slow down time’s continuous march or, at least, allow time to kick up its heels and linger. “The bones were there for a beautiful chalet home, and we wanted to bring that out,” Houser says.

To create an inviting space in the rec room, Houser had its threshold expanded by removing much of the wall, allowing guests glimpses of the walnut-framed pool table, Verellen butterfly stools and dazzling artwork.

“The concept was to create a space reminiscent of a classic European ski chalet. Our clients are young and sophisticated, so we wanted a space that would enhance the family’s lifestyle. The lighter wood was paired with steel and pale plaster tones. The juxtaposition of light and dark, warm and cool, raw and refinement were all part of the vision.” 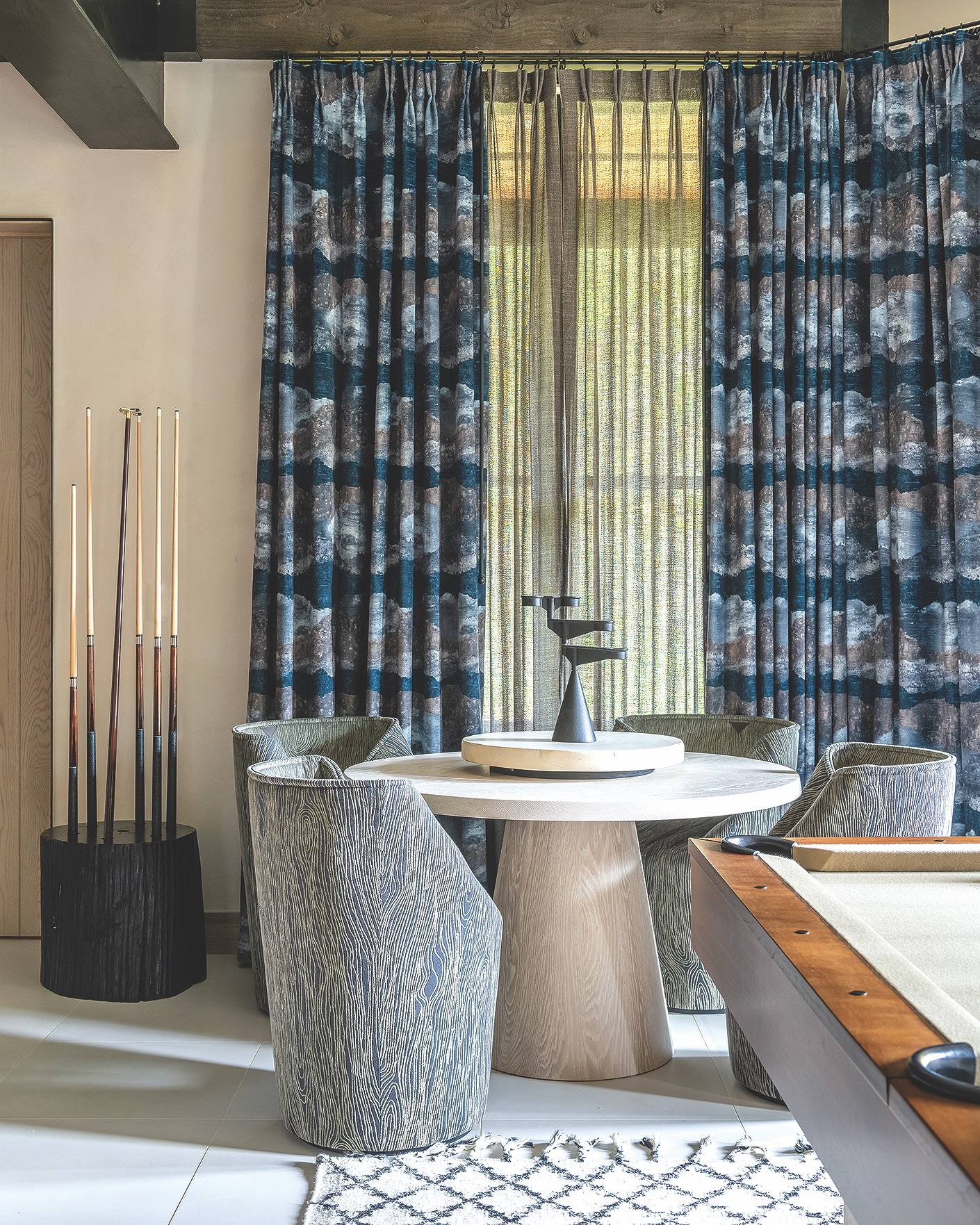 The rec room’s colorful curtains draw the eye upward to the wooden beams that are repeated throughout the house.

Disparate features were meant to flow together. The large fireplace was pared down, for example, and steel was added to link it to the gray timber columns (also framed in steel to give a modern update) that stretch tall to a mighty ceiling. Focusing on paring down spaces while opening them up and paying attention to sumptuous details were paramount to updating the house, Houser says. 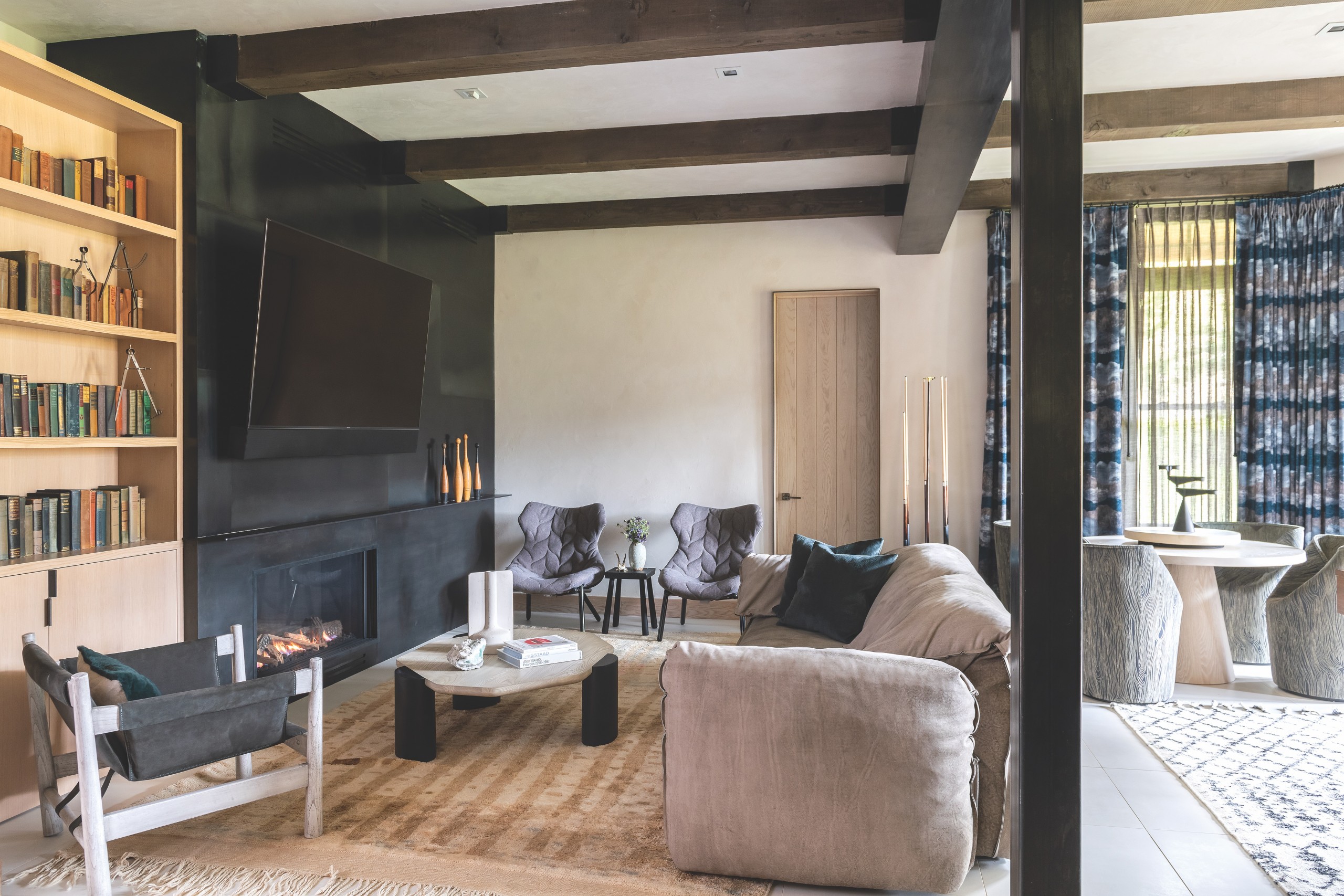 Facing the pool table in the rec room, a stainless-steel accent wall pays homage to the rest of the house’s steel elements.

“We added white oak paneling in key spaces and punctuated those spaces with steel accents throughout the residence. A cohesive palette was essential in evoking a sense of calm. Color was introduced in the art and some key pieces in the home to offer a little bit of punch to the designs.” 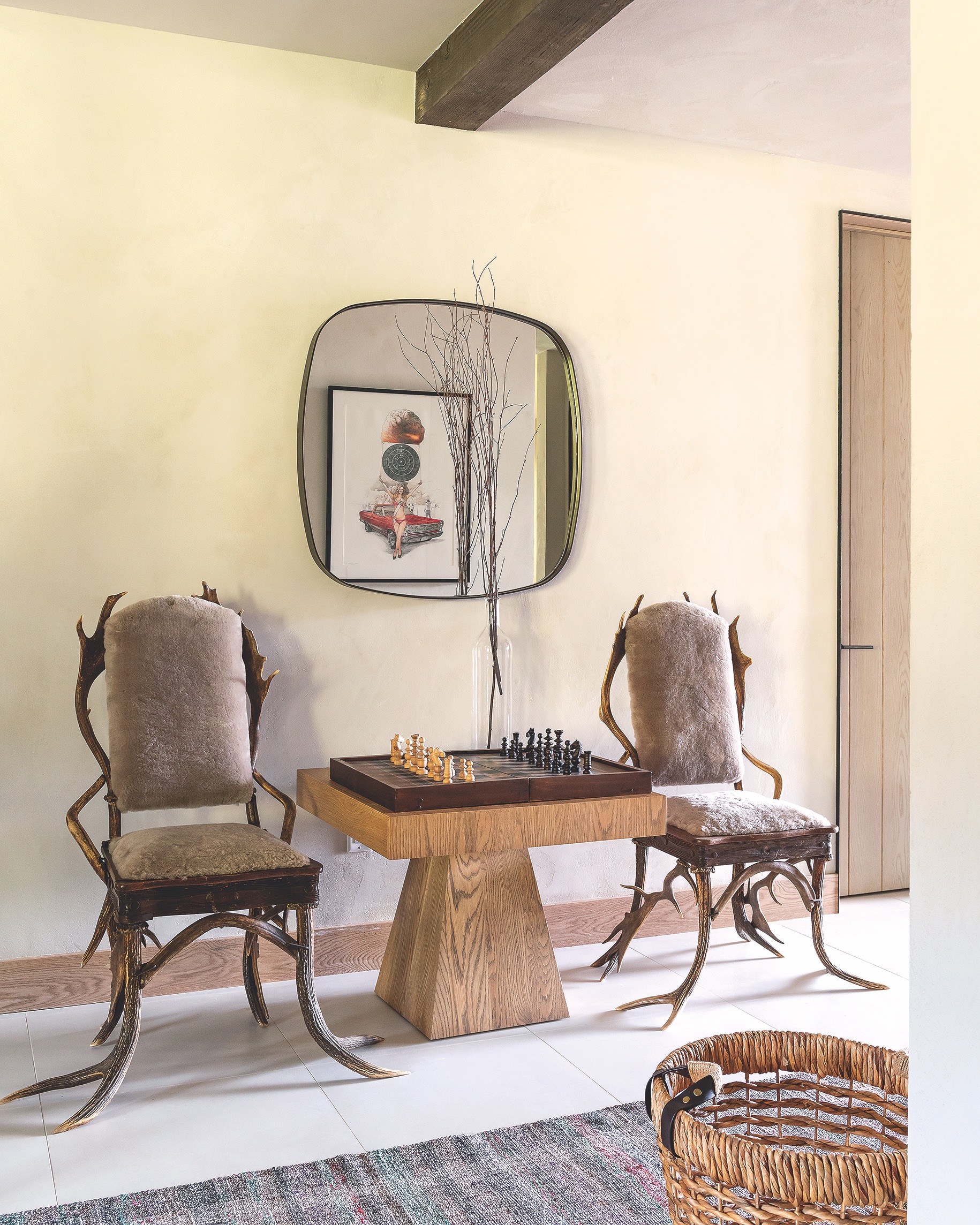 To usher in a fun allusion to life on the mountain, Houser used a pair of chairs featuring antlers and plush gray material.

Apart from being a visual experience, visiting this remodeled home may be a tactile one, too. Houser selected the white oak wood for its deeper grooves and soft touch to work up as a clever contrast to the stainless steel. Silvery gray quartzite kitchen countertops, durable as granite but as beautiful as marble, dazzle in the kitchen and are paired with olive-green leather-backed stools that call attention to the range hood. This unique feature is burnished in a distinctive patina that warms up the steel, which, Houser says, makes the steel come to life. 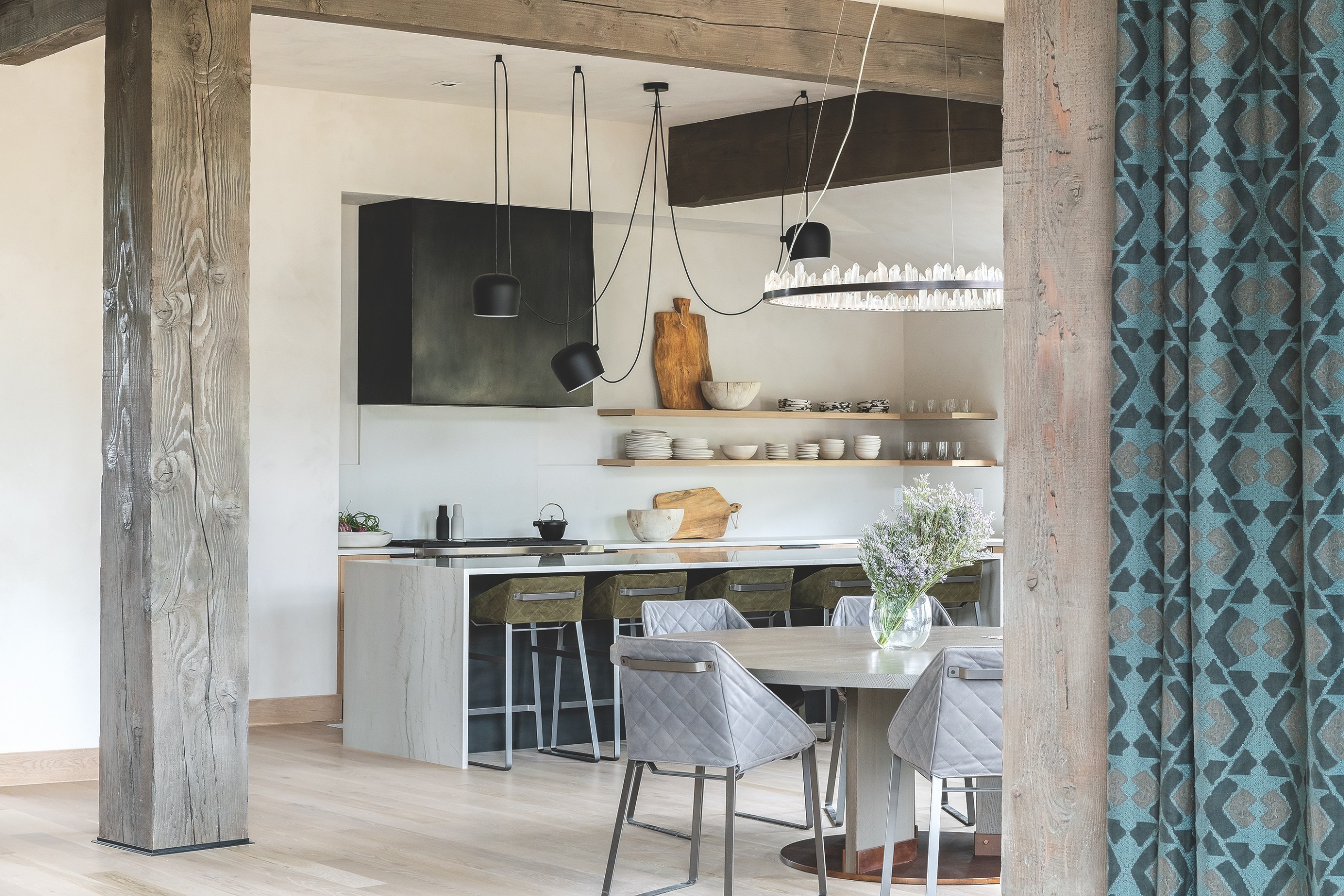 White oak shelves work as pops of color in the nearly all-white kitchen. A pearly waterfall-edged quartzite countertop and a chandelier made of real quartz pieces further affix a touch of wonder.

Perhaps unexpectedly, Houser brings new life to the house with her skillful use of antiques. “We believe that a home should have soul, which is why adding in vintage finds from our travels or the clients is so important to us.” The yellow chair in front of the fireplace combines well with the abstract art adorning an adjacent wall. The art is from the clients’ personal collection, and its union with the chair was a nice happenstance, the homeowner says. 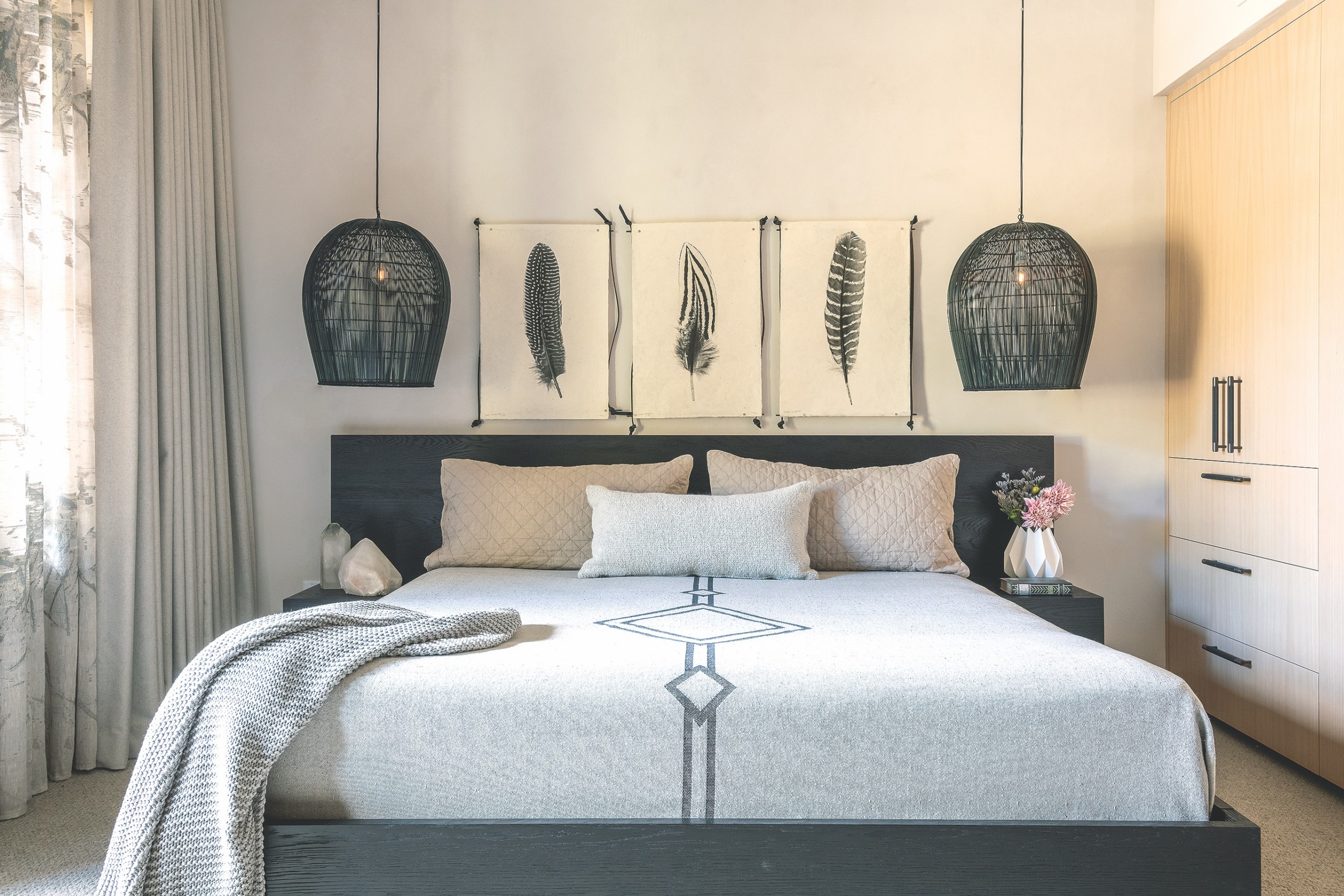 A simple but elegant bedspread complements the darker shades in the bed frame to create a crisp, clean look in the guest room. Giant quartz crystals embellish the nightstand to augment the other earthen elements used in nearby rooms.

The overflow room, or older kids’ room, is another example of ushering in new life through found objects. Upcycled toys from Montana’s rugged past work in tandem with the clients’ own comic-book-style art. 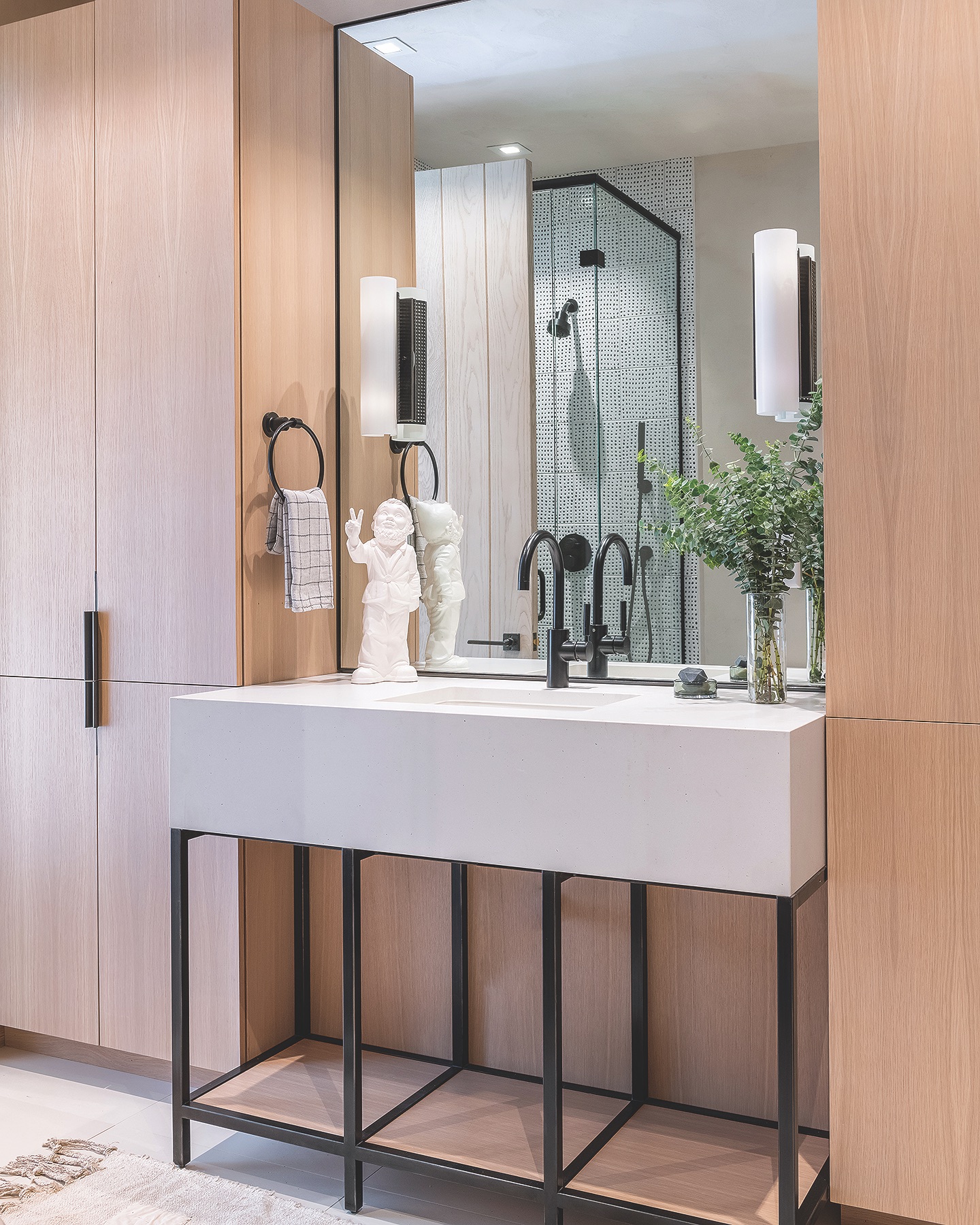 The powder room’s countertop features a gnome from Germany that Rain describes as “a welcoming jovial spirit.”

Houser observes, “The layers of objects give the home warmth and a bit of intrigue. We are constantly searching for new products. The travels that Skye (my business partner) and I take together have been some of the most amazing adventures, and we always return with unique finds that will last a lifetime.”

After this remodel, it may be safe to say that the home’s style will endure for many years to come.