When an Alabama couple decides to seek refuge from humid summers and build a rustic Colorado retreat, they enlist the help of reclaimed wood supplier Hank Chapell 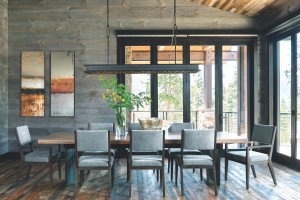 A unique home in Breckenridge takes a moody approach to rustic mountain design with the help of senior interior designer Nicole Bruno from Collective Design Group. | Photography by Kimberly Gavin

It’s not often that a homeowner has a definitive vision for their vacation getaway, but right off the bat an Alabama-based couple knew exactly what they wanted for their rustic Breckenridge, Colorado build. With the help of Nicole Bruno, senior designer at Collective Design Group, their main priority was to ensure that the home had as little visible drywall as possible. First step—bring in Hank Chapell, a wood supplier out of Georgia who previously collaborated with the owners on a project in Coastal Florida. His stunning reclaimed material sourced from throughout the southern states fit the bill for adding texture in lieu of showcasing drywall. 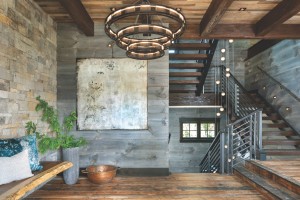 Art by Sabine Maes sourced from High Point Market uses natural pigments on a texturized canvas to tie together the many colors used in the stairwell. Overhead hangs a tiered circular chandelier manufactured by FUSE lighting.

In collaboration with BHH Partners and Pinnacle Mountain Homes, the construction of the 6,500-square-foot home featuring his-and-her suites, four guest bedrooms and a kids bunk room took around three years to complete from drawing plans to finalizing the interiors.

The city of Breckenridge sits at 9,600 feet of elevation, making the building process somewhat of a challenge. “In terms of snow load and the layout of the watershed, you have to make very thorough choices to suit the high-altitude climate,” explains Kody Becker, project manager at Pinnacle Mountain Homes. With the help of Carl Warnke at Engineering Designworks, the team set the plumbing and framing layouts with all seasons in mind. 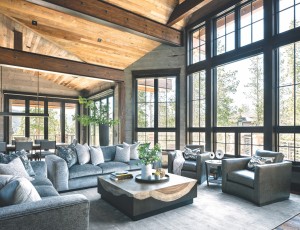 In the living room, reclaimed wood from Hank Chapell gradually gets lighter from the floor to the ceiling, making the room feel grander. During the winters, the space facilitates family gatherings for watching the snowfall.

When interior designer Nicole Bruno first saw the build through a virtual tour, she knew she had a rare and exciting project on her hands. Beginning with an eight-foot custom walnut and steel front door, the entryway opens and guests cross a threshold of dark and light lumber floors before entering the open-concept kitchen, dining room and living room. A grand wall of windows lining the living room floods the whole space with natural light. Stitched together using rich tones, textured walls and cold-rolled steel accents, the three rooms appease the rustic vision, while also having no drywall to be seen. 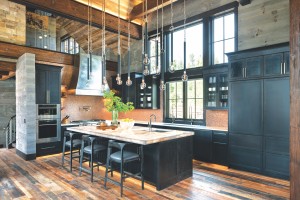 Coiled light bulbs hover above the kitchen island at different heights not only as a stylistic choice: They uniquely illuminate the space at night, creating a romantic ambience.

Bruno opted for mostly custom pieces throughout, including the nearby overhead lighting fixture in the dining room. “The owners wanted it to look like the constellations at night,” says Bruno. Crafted by Fusion Design and fabricated by Hubbardton, the piece was fitted with LED lights and hangs above an eight-seat table. 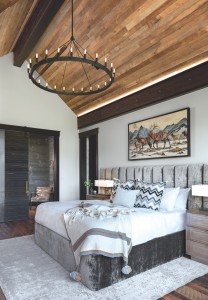 Gray velvet upholstery on the bed frame in one of the main bedrooms creates a luxurious yet neutral accent to the high ceiling space.

Before rounding the stairs to the bedrooms, a live-edge walnut slab creates a welcome bench alongside gray siding from Chapell. Upstairs, the wife’s vision was for something spa-like, and the husband’s leaned more toward the masculine. Bruno made sure the suites complement each other by overlapping textures and gray accents. 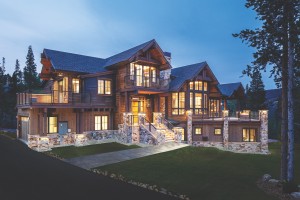 Due to the uniquely shaped plot of land, the footprint of the home covers most of the property. In a design choice suggested by Pinnacle Mountain Homes, the decks were built off the front bedroom and living area in order to enjoy the south-facing views.

“We settled on Breckenridge because we used to live in Denver in the ’90s,” says the husband. “We wanted to return to the state but in a city that we knew we could enjoy year-round.” With plans to spend the winters skiing and the summers mountain biking and white-water rafting, they built their home as a serene space for family gatherings. Situated five minutes from the Breckenridge gondola, the prime location makes it an ideal skiing getaway.

In many ways, the rustic and texturized home diverges from the homeowners’ beach escape in Florida, but one thing remains the same— incredible surrounding nature. On the sands in Florida, you smell the ocean air. Here, the fragrant evergreens line the backyard. “In this particular build, a moose commonly strolled onto the lot and tore up the landscaping,” Becker laughs. The multiple raised patios that circle the property give access to top-notch wildlife viewing.